The Adventures of Gino Bartali Continue

By 1943, Italy was in chaos. For even a well-known sporting hero such as Gino Bartali, his public profile was no guarantee of his safety. Yet Bartali chose an even more risky course of action, as foreshadowed in Part 1. He would subsequently go on to even greater sporting and public glory.

Part 2: Gino Saves Italy
In the period from 1943 onward, Bartali devoted himself to training. He was apparently contacted in Florence as a high-profile figure with known anti-fascist sympathies. One of his first actions in late 1943 was to help hide a local Jewish family, the Goldenbergs, who were friends of his cousin Armandino, in the basement of an apartment building in Florence, where they remained until liberation in August 1944. Bartali’s involvement then deepened. During his training rides from Florence, often to Pisa and Lucca, he helped carry forged documents hidden in the tubing of his bike frame to assist refugees hidden in convents and monasteries. “His role was to take photos and paper to clandestine printing presses to produce the false documents,” according to his son, Andrea. “He was also a guide to indicate the lesser known roads to arrive at central areas of Italy without being seen.”

One such refuge was the monastery in San Quirico d’Orcia, which Bartali would visit with forged documentation. Naturally, his training rides enabled him to range far and wide: San Quirico d’Orcia is 127 kilometres from Florence. According to testimony for Yad Vashem, Giulia Donati recalled the escape of her family from Florence to Lido di Camaiore where they were offered a home thanks to two elderly sisters, Isabella Pacini and Settilia Crocini. Bartali ferried documents to them as well, some 100 kilometres from his home in Florence. Reports have suggested he might have ridden as far as Rome: 285 kilometres, which is not unreasonable – the longest stage in the 1938 Tour (Bartali’s first Tour win) was 311 kilometres and Bartali was known for his training rides of over 400 kilometres. 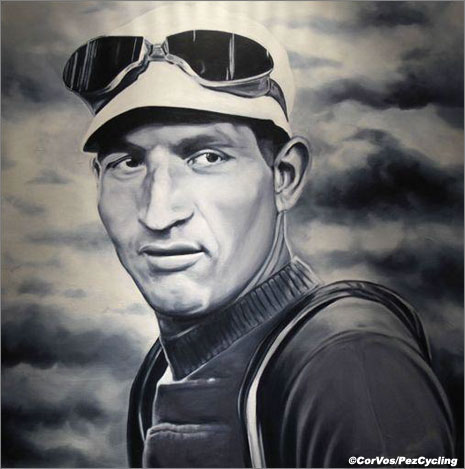 The authorities were suspicious of Bartali’s activities but, given his public profile, were reluctant to intervene, although he was apparently interrogated by the special police on at least one occasion. Despite this, one must not minimize the risks he was taking with such support for resistance efforts. At one point he was reportedly forced to send his own family into hiding.

One Does These Things
So what was Bartali’s motivation? We have already seen that he had little regard for Italy’s fascist regime. But by this point in the war, Italy had a new government under the old king in the south (with the Christian Democracy party, with support from Catholic action, emerging as a major political player) and had formally changed sides. This had plunged Italy into a civil war of sorts with Mussolini setting up a new regime in northern Italy with German support; various resistance movements quickly emerged, the most powerful being the Communists. The German army occupied as much of the country as it could and fought the Allies in southern Italy with Rome liberated only in June 1944.

So there were real risks to collaboration with the resistance movements, even for a national figure like Bartali. According to reports, he spoke little to his family about his exploits. “One does these things and then that’s that,” he apparently said. By all accounts he was a proud and obstinate, a tough and committed man even by the standard of the times. But thumbing his nose at the fascists, supporting Catholic Action, and the obstinacy of youth surely cannot account for everything he did. It would seem that beneath the hard exterior was a streak of pure humanity.

Ten Years Later
One would think that after being exploited as a political figure by the fascists prior to the war, then actively working for the resistance to help save Jewish families during the war, that in the post-war years Gino Bartali would have had quite enough of politics. But that was not to be and Bartali would again be a central player in wider events, this time at the 1948 Tour de France.

The 1948 Tour saw the first post-WWII participation of an official Italian team. It was only the second post-war Tour, although the Giro d’Italia had held its first returning race in 1946. It was clear that the rivalry between Bartali and Fausto Coppi was going to define Italian cycling in this new era: Bartali won the Giro in 1946 and Coppi won it in 1947. By the following year their professional rivalry was so intense that Coppi refused to ride on the Italian team for the Tour with Bartali and pulled out of consideration. The Giro that year had been won by Fiorenzo Magni. (For an indispensible account of the Coppi/Bartali rivalry, see William Fotheringham’s book Fallen Angel.)

Bartali was unsure how he would fare in the 1948 Tour. It was a long parcours, just shy of 5,000 kilometres over 21 stages with plenty of mountains and a late swing through Belgium. The final stage was from Roubaix to Paris, the reverse of the springtime classic, at 286 kilometres. Early in the race, Bartali won two stages in the Pyrenees but lost time elsewhere, including on the semi-mountainous stage between San Remo and Cannes. Was the Ironman simply past his prime? 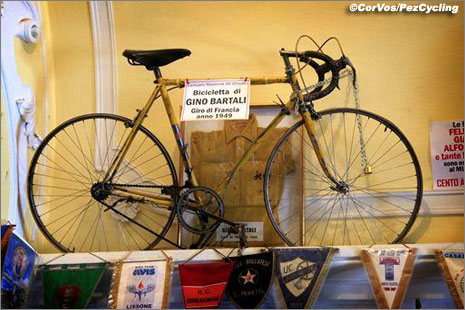 By the rest day in Cannes on 14 July he was a miserable 21’20″ behind a brilliant young Frenchman, Louison Bobet. According to reports, the Italian press corps was already packing its bags to go home. But back in Italy, the head of the Italian Communist party, Palmiro Togliatti, was shot by an assassin in the morning and badly wounded. Given the fragile post-war political situation (Italy had established a republican government in 1946) the assassination attempt provoked chaos and a general strike was called. A Communist uprising and civil war was feared. That evening, according to the story, Bartali’s old friend, Alcide De Gasperi, prime minister and head of the Christian Democracy party, phoned him and pleaded for a miracle. “This is important,” he said. “No longer for you but for Italy, for everyone.”

Bartali responded by winning the next two mountain stages in the Alps on 15 and 16 July, with winning margins of 6’18″ and 5’53″. It was again the stage to Briancon, this time some 274 kilometres from Cannes over the Allos, Vars, and Izoard climbs, that Bartali launched his attack. It is hard to imagine what might have been going through his mind, on the southern ascent of the Izoard, some ten years having passed since his exploit in 1938, after all that had happened to him, his family, and to Italy. Was he reflective on the curious turn of history and his place amongst it? Or did the pious Gino simply offer up a prayer, seeking some small solace from the searing in his legs and lungs? Whatever he was thinking, it was another triumphant win after 10 hours and 9 minutes in the saddle at an average speed of 27 kph. 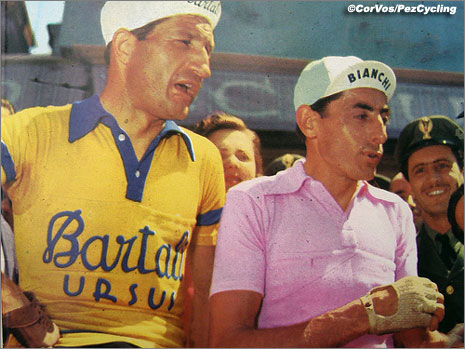 By the end of the second alpine stage in Aix-les-Bains, he had clawed back his deficit to Bobet and added an 8-minute buffer. On one of the climbs, before dropping him, he apparently said to Bobet: “You’re a great fighter and a great champion.” By Paris, Bartali was 26 minutes ahead of the second place finisher; Bobet was fourth at nearly 33 minutes. The Italian team director, Italy’s second campionissimo Alfredo Binda, said after the race: “If I’d managed Bobet, he’d have won the Tour.” Maybe not. Bartali’s riding was a display of total dominance and Italy was reportedly spellbound, all thoughts of civil war forgotten as they listened to their radios. On 17 July, the day after Bartali’s two stage wins, the general strike was called off and Togliatti was declared to be in a stable condition in hospital.

The Saviour of Italy
Once the Tour was over, Bartali was declared the ‘saviour of Italy’ by many reporters and the myth was cemented in place. One sportsman had saved a whole country from political upheaval and civil war. Commentators were later sceptical of this narrative. The sociologist Benji Maso argues that despite the general strike the danger of civil war after the attack on Togliatti was already easing due to the failure of the assassination. Others have agreed, and former prime minister Giulio Andreotti, who at the time was a young Christian Democrat politician, told the New York times: “To say that civil war was averted by a Tour de France victory is surely excessive. But it is undeniable that on that 14th of July of 1948, the day of the attack on Togliatti, Bartali contributed to ease the tensions.” Actually, Bartali’s contribution started the next day, on the 15th, which only reinforces Andreotti’s downplaying of Bartali’s efforts. Other historians have even questioned whether the famous phone call from De Gasperi actually took place. 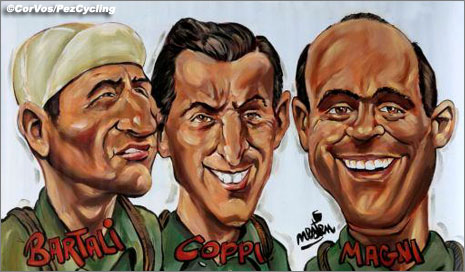 Nonetheless, Bartali’s stage wins and overall victory were given a meaning greater than just their stature as sporting triumphs. This propelled the 1948 Tour into the history books not just because of Bartali’s riding but also because of its wider impact. Once again, cycling played a prominent part in Europe’s history and Bartali had somehow once again been at the centre of the action.

Bartali would go on to have more adventures. He did not retire from racing until 1954 and lived to be 85. There were more race wins, including a Giro stage in his final appearance, but no more overall titles at the Giro or the Tour, largely due to Coppi’s dominance. Whatever Bartali’s innermost motivations for all his ‘political’ exploits over these years – anti-fascism, helping out friends, the vitality of youth, his humanity – the bike was always his best weapon. For the gravel-voiced hard man from Ponte a Ema, most of his talking was done with his legs. And he always had plenty to say.

The Adventures of Gino Bartali, Part One