Preview: The mighty PEZ-Crew has landed on the soils of Europe to start the 2012 campaign – opening this weekend with Omloop Het Nieuwsblad Saturday and Kuurne-Brussels-Kuurne on Sunday. Ed and Dave are by now well into the pils and frites, while Jered hopes his bike is freed from customs in time for his own race on Sunday. Here’s a look at the Cobbles openers ‘proper’…

The world was still at war when the first Het Volk was fought over – 1945, with Jean Bogaerts of Belgium victorious. In 1947 it was Albert Sercu who won; his famous son, Patrick isn’t young anymore – despite a glorious career the ‘Flemish Arrow’ never managed to emulate his dad, although he was second twice and third once. The Sercu dynasty will win no more races but Het Volk rolls on; the locals call it ‘Gent-Gent’ and with the take over and disappearance of the newspaper which gave the race it’s name, it’s now called ‘Het Nieuwsblad.’

You’ll find no llamas, camels or cute baby kangaroos at Het Volk and despite the best efforts of the marketing men to roll the race up with the other Belgian cobbled spring classics – Dwars door, Gent-Wevelgem, the Ronde, Scheldeprijs and Brabantse Pijl – when the rubber hits the road this Saturday it’s no marketing exercise or PR coup.

It’s a man’s race and one which most Belgian riders would sacrifice a limb for.

A win means you join the Legends, the Cobbled Kings – the likes of De Vlaeminck, Merckx, Maertens, Van Petegem and Museeuw. 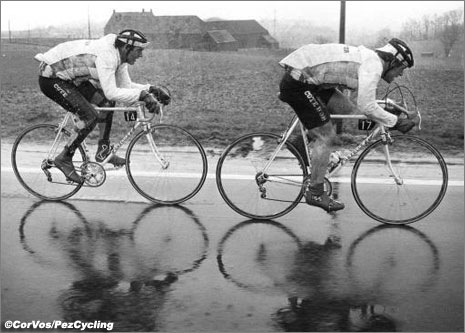 It’s not the Ronde in terms of desirability – nothing is – but it’s not too far behind.

Let’s talk stats for a moment – this is number 67, but there are only 64 results. 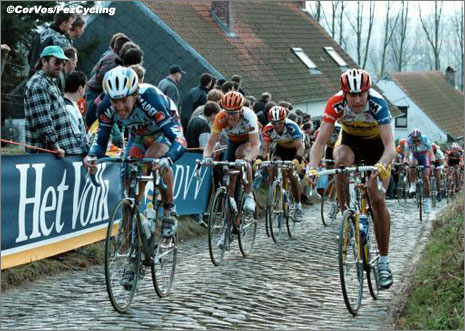 The field tackles the Molenberg.

From the start in Saint Pietersplein, Gent the race heads out to the huge hog’s back of a ridge above Oudenaarde which comprises the Flemish Ardennes.

The race describes loops to approach the ridge from different directions and take in the anti-gravity aspect of the race. 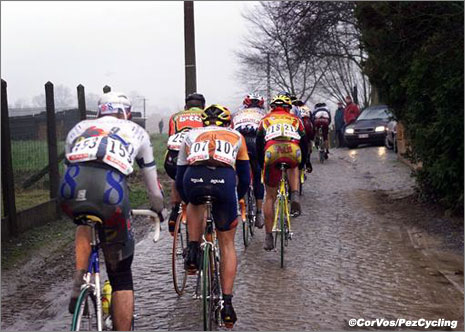 This year we have ten ‘hellingen’ – hills – short, steep, nasty affairs, many cobbled, all familiar from years of being part of the cobbled classics – Tenbosse, Kruisberg, Taaienberg, Eikenberg . . .

And there are nine stretches of ‘kasseien’ – cobbles – with the longest being the Laange Munte at 2500 metres. 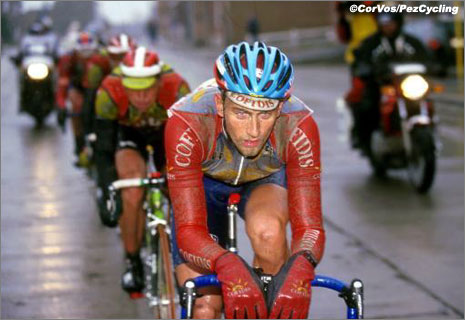 Frank Vandenbroucke’s victory in Gent-Gent was an auspicious start to his incredible 1999 campaign.

The finish is back in Gent after 200 kilometres.

With that lack of an extra hour and more – which takes the big classic up to 260 K – meaning that there are more potential winners.

And on the subject of winning – statistically, Belgians have a huge advantage; with 53 of those 64 who have won not needing a passport to get to the start line. 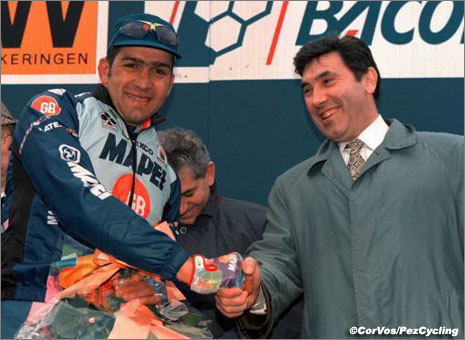 Four Dutchmen have won, including Sebastian Langeveld, last year – but more of him in a moment.

Only four men from the shores of the Mediterranean have won – three Italians, the late, great Franco Ballerini, Michele Bartoli and Filippo Pozzato plus Spaniard Juan Antonio Flecha.

And only one English speaker has topped the podium – Irishman Seamus Elliott in 1959.

Three men have achieved a hat trick of wins, all Belgians: Ernest Sterckx in the 50’s; Eddy Merckx’s right hand man, Jos Bruyere between ’74 and 80; and most recently ‘de Pete’ – Peter Van Petegem between ’97 and 2002. 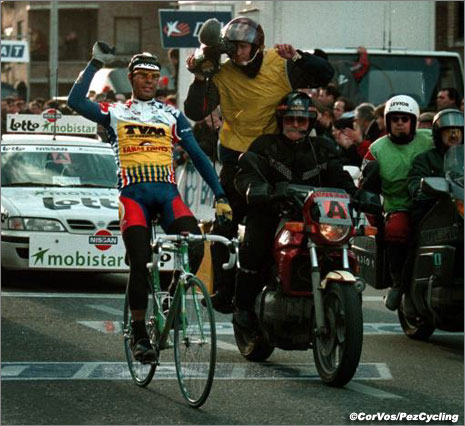 The names of the men above define the type of rider who can win here – all of the Belgians, not to mention Elliott and Ballerini were hard men.

But there’s a chance too for those more delicate but with super class, Pozzato fits this bill perfectly. 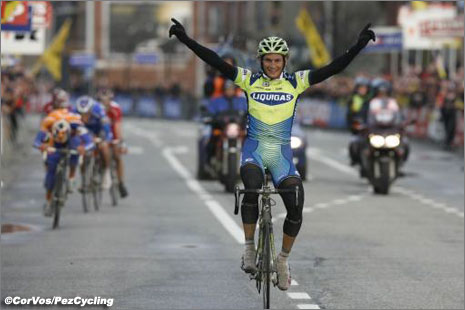 And it’s a race for Young Turks, bright young things on the way up like Nick Nuyens in ’05 and Philippe Gilbert in ’06.

But there’s the odd surprise – Sebastian Langeveld in 2011 was the biggest in recent years. 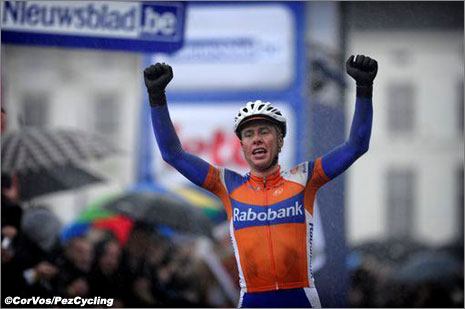 Sebastian Langeveld will return to defend his title with GreenEDGE.

In the cobbled classics, experience is everything – unless you’re Roger De Vlaeminck, whose first pro race back in 1969 was Het Volk, which he duly won.

Langeveld returns to the fray for GreenEdge, but there’s not a lot of money going to go beside his name. 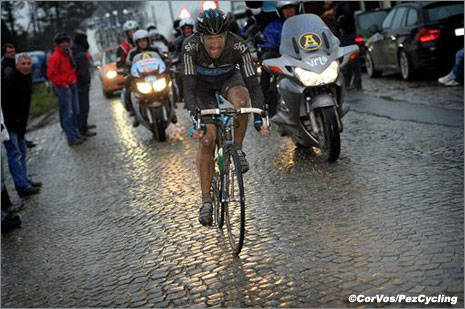 Juan Antonio Flecha has been the man at Het Nieuwsblad for the past two years with a victory and runner-up finishes to his credit.

The hard man who started Sky’s season with such a ‘bang’ in 2010, by winning here – Juan Antonio Flecha – is back and will be in the mix, rest assured.

But there’ll be no Eddy Bo-Hag for Sky, down with a bug; he’d have been one to watch, for sure.

But don’t forget young Englishman Ian Stannard, he’s stood on the podium at Kuurne and is on an upward trajectory. 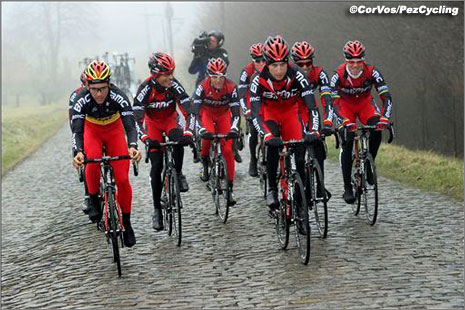 BMC has a LOT of options.

The previous year’s winner will also be here, Thor Hushovd and so will his BMC team mate, Phil Gilbert who won in ’08 and ’06.

As well as Hushovd and Gilbert, there’s another useful tool in the BMC box – with a string of strong 2011 results, including a win Paris-Tours – Greg Van Avermaet has to be considered. 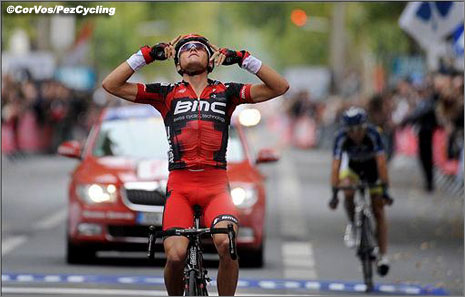 Outside of Hushovd and Gilbert, there’s also Greg Van Avermaet.

But Boonen for all his light heartedness is a determined, proud, hard man and wants to get back to the very top, where he feels he belongs. 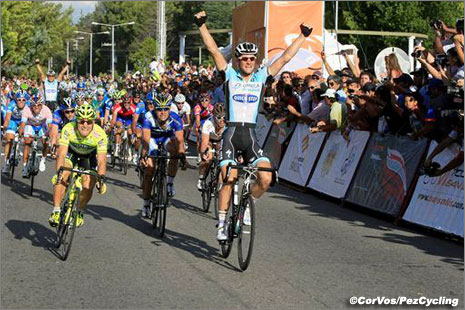 It’s about time for a Boonen victory in Gent.

A ‘Tommeke’ win would send Flanders into raptures.

Rabobank are strong – a resurgent Matti Breschel and powerhouse Lars Boom are their biggest guns.

And then there’s Vacansoleil, as former British elite road champion, Hamish Haynes says; ‘when you see that Vacansoleil bus park up, you know it’s going to be a hard race!’ 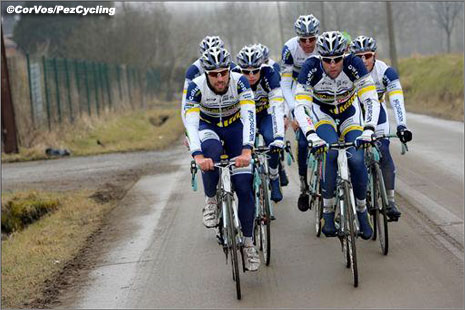 Vacansoleil will be a team to keep an eye on.

Bjorn Leukemans is on the brink, Thomas De Gendt has the grinta and Stijn Devolder has much to prove. 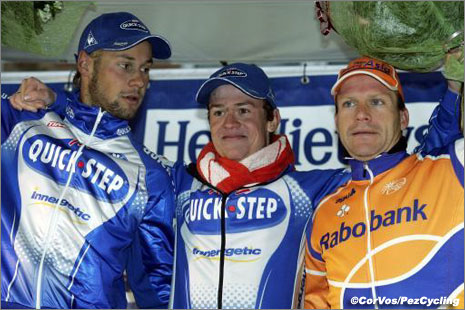 Tom Boonen has come close on numerous occasions, but unlike his former teammate, Nick Nuyens, he does not have a Gent-Gent title to his name.

Winner of the 1976 Ronde and a runner up in Het Volk, Walter Planckaert tips Van Avermaet and Leukemans.

And if you want an outside bet for a podium – take Leif Hoste from Accent Jobs-Willems Verandas, there’s still life in that old canine. 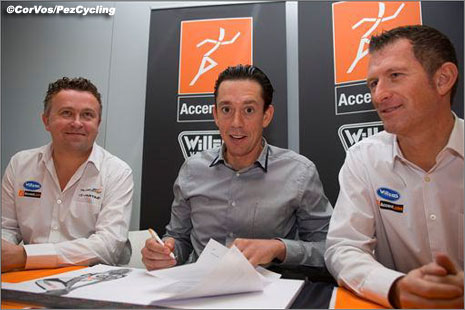 Don’t forget about Leif Hoste. Don’t do it!

Sort out the live stream, get the Leffes in the fridge and tell the kids the sofa is off limits on Saturday afternoon – season 2012 is about to commence.