Cycling Fashion: Ed Hood has been admiring cycling sartorial elegance for more years than he would like to admit, and he is not too enamoured with the modern designs. Time for Ed to look back over the best pro jerseys of the past and pick his favourites and not so popular team kits.

Only a plain red jersey, but Flandria was a classic

The launch of the new Ineos team jersey this week got me to thinking about jerseys. . . The Ineos design doesn’t bowl me over, but no doubt there’ll be good reasons for it looking the way it does that ‘non-design gurus’ like me can’t figure? 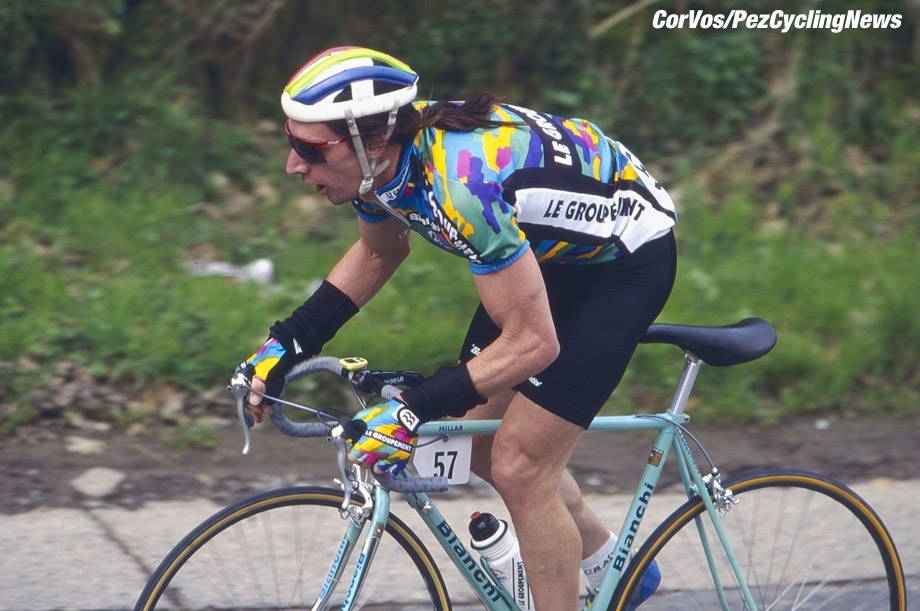 Le Groupment – Not the best

# INEOS
But one thing that jersey tells you about the Ineos team is that it’s ‘big bucks,’ the manufacturer’s name, Castelli is there and so too is the bike sponsor, Pinarello but both in unobtrusive fashion. ‘Ineos’ is what that jersey is all about. 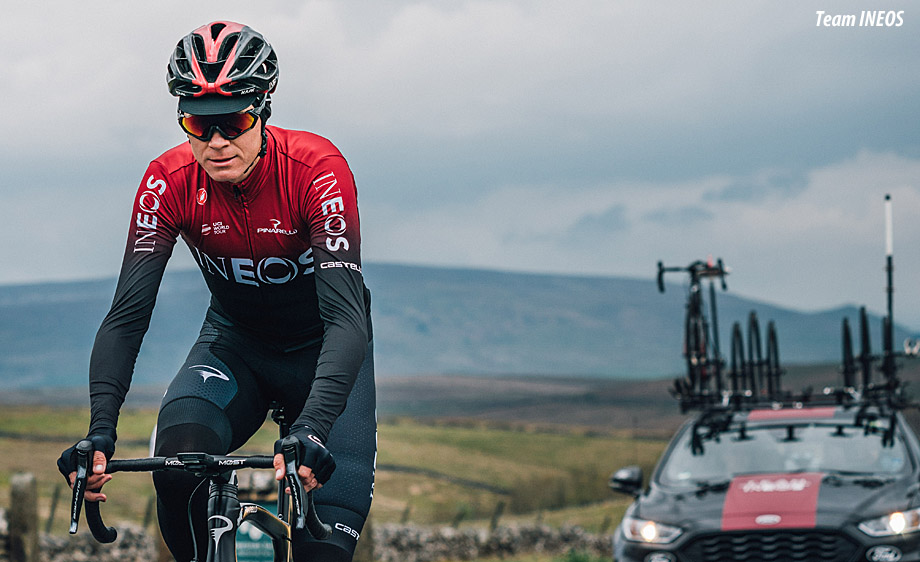 The new INEOS jersey by Castelli

# Androni
Compare that to Sen. Savio’s Androni Giocattoli Sidermec strip where small sponsors abound to try and make ends meet – but we’d never ‘dis’ the men in red; always at the sharp end and already with a dozen wins in 2019 including one of our favourite races, the Tro-Bro Leon. 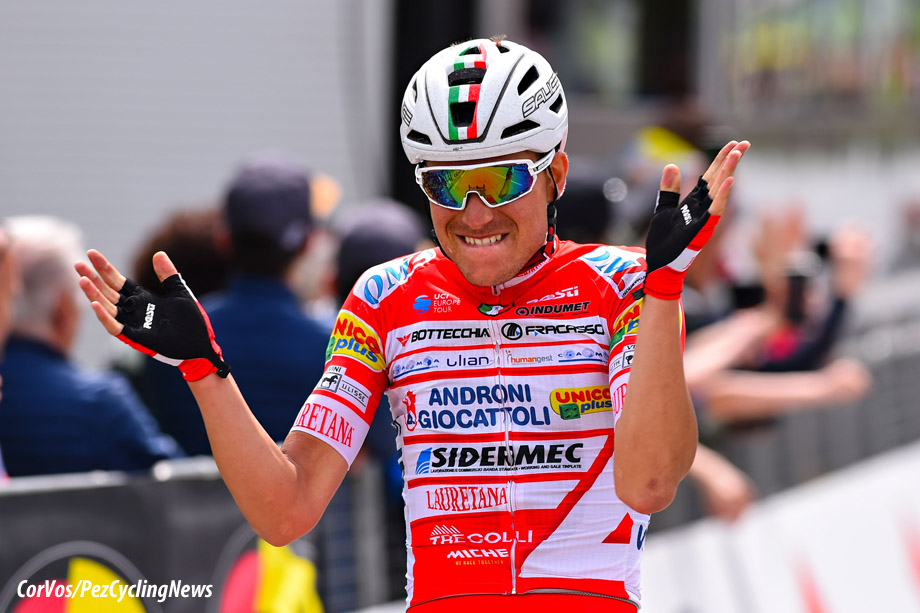 Lots to read on the Androni jersey

The Ineos launch sparked a wander down maillot memory lane for me; let’s start where I can just about remember – the 60’s.

# Peugeot
It may be half a century and more old but in my opinion, no one has ever designed a nicer jersey than this – fresh, simple, instantly recognisable, surely a true ‘design classic.’ And never cooler than when on the back of Tom Simpson; rest in peace sir. But really, your editor and I are children of the 70’s; and whilst there are those that say it was, ‘the decade that taste forgot’ that doesn’t apply to cars, music or cycling team jerseys. Unsurprisingly, four of the very best jersey designs came from Italy. 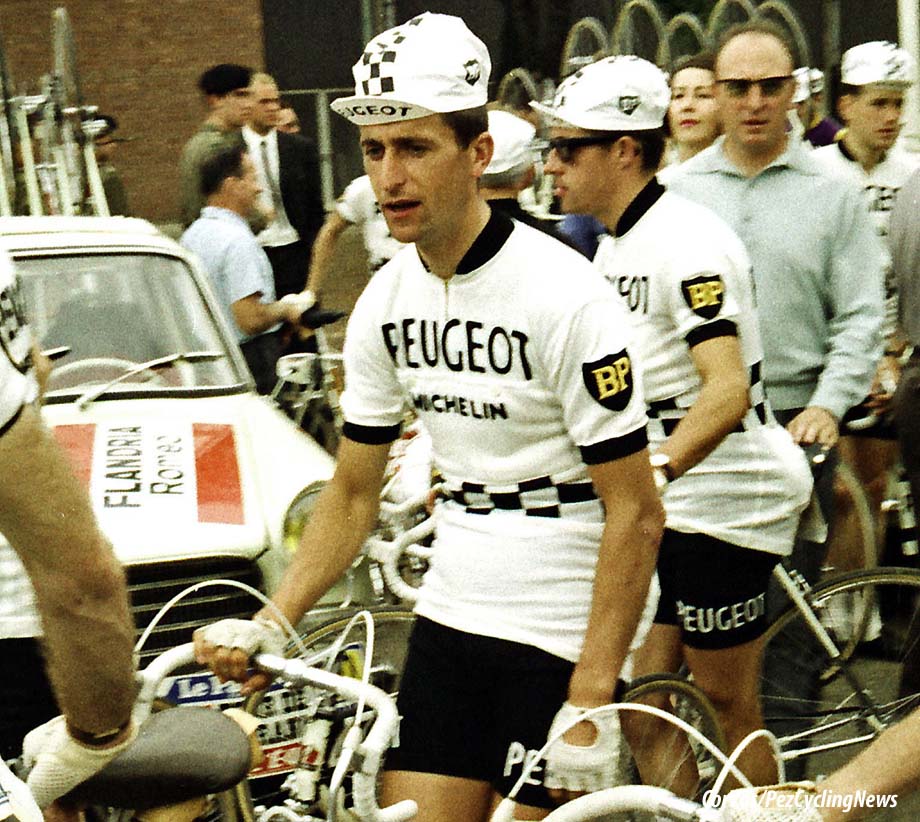 # SCIC
Kitchen company SCIC followed the Peugeot monochrome look, sharp, simple and cool, especially with the like of Michele Dancelli inside it.

# Dreher
Not as well known as Peroni or Moretti, Dreher is Italian beer; nothing complicated, just red and white; red bikes, white tape – sit the late, great Patrick Sercu on one and you have ice cool. 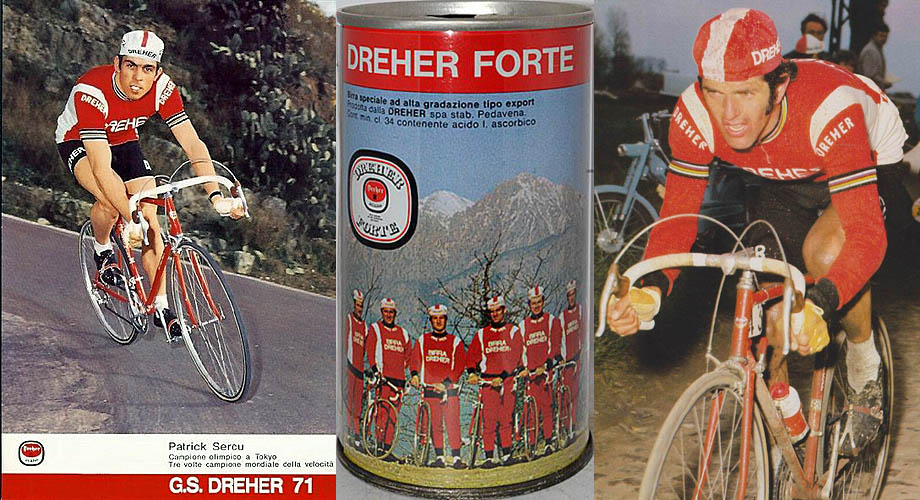 Sercu, a can of beer and De Vlaeminck

# Brooklyn
Along with the Peugeot garment this has to be in line for one of the best jerseys, ever. Based loosely on the United States flag it made chewing gum look cool; sit the rider – especially if it’s Roger De Vlaeminck – on one of those blue Gios machines and you’re close to perfection.

# Bianchi
‘Celeste’ is that lovely light blue colour for the jersey and the legendary bike manufacturers wares; all the way from Fausto Coppi through to Felice Gimondi, the team which the Tifosi idolised above all others. Fashion is one thing, class is another – and what about those stitched leather handle bar sleeves? 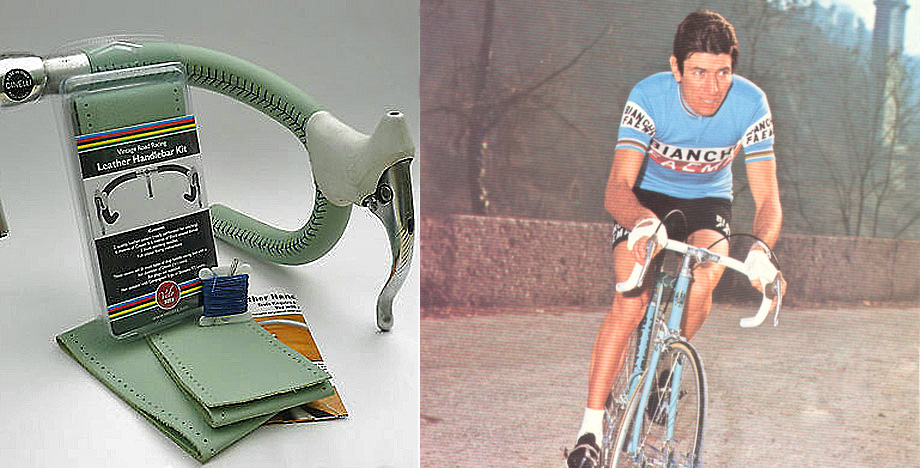 # Raleigh
Those 70’s Dutch guys. . . the late Johan Cruyff gave us ‘total football’ and the late Peter Post gave us ‘total cycling’ his team wasn’t a team of domestiques with one leader, rather a team of winners with the best tactics, cars, (British) bikes and very classy jerseys. We move into the 80’s and in the decade of Sue Ellen (you’re a tramp and an unfit mother! As JR was fond of telling her) and Delta brakes it was inevitable things would have to change. . . 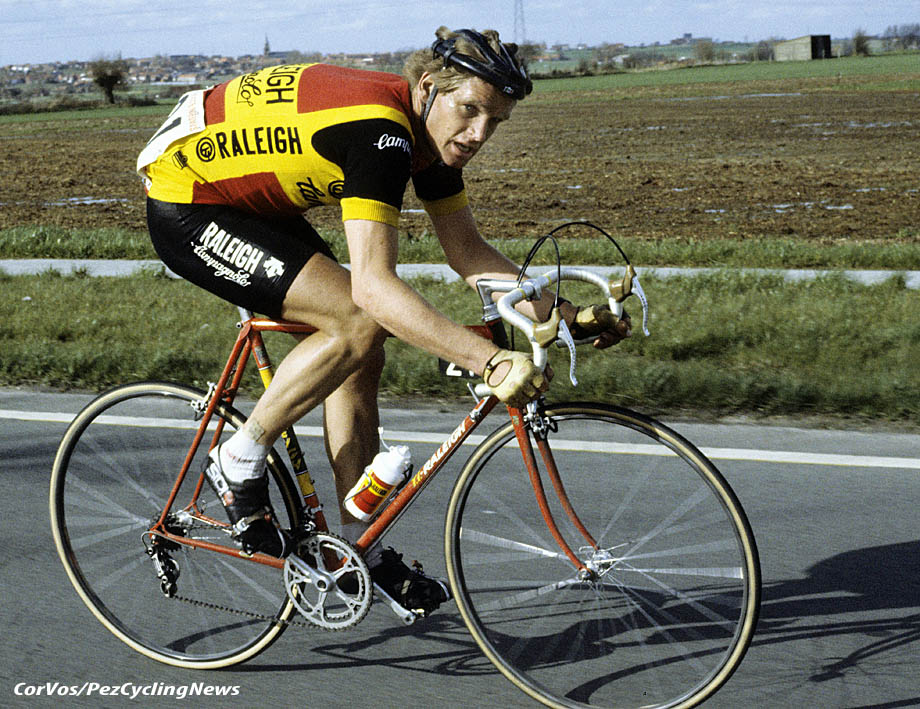 # Panasonic
Albeit Peter Post retained good taste and class with his Panasonic jersey.

# 7-Eleven
And whilst we may have expected brashness when those Yanks got involved in EuroPro cycling, that wasn’t the case with the 7-Eleven jersey – red, white and green, understated but instantly recognisable. Still one of my favourites. 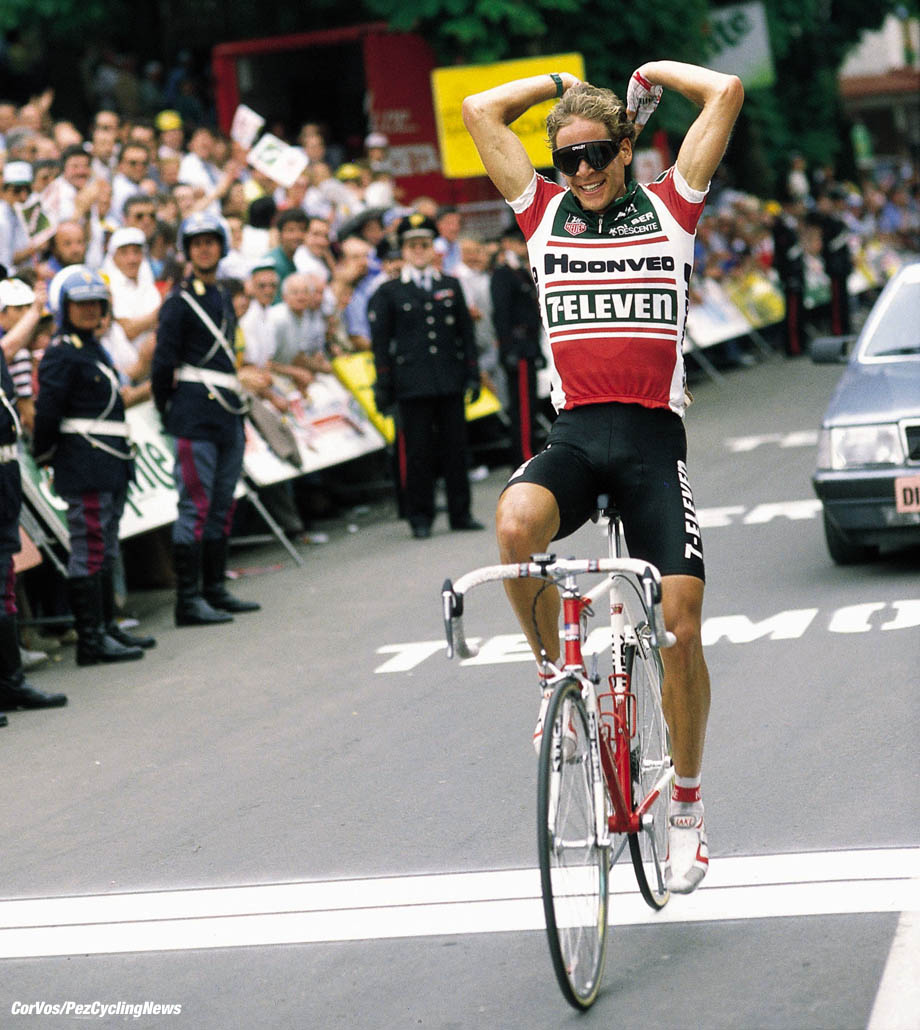 # Skil
The Skil power tools team jersey with it’s diagonal red and white stripes with blue side panels was a jersey which could have gone wrong but the designers got it just right, so much so that when Skil came back into cycling decades later, they borrowed from the old look. Sean Kelly is the man we forever associate with it – but Vuelta and French Championship winner, Eric Caritoux looked pretty damn good in one, to my eyes. 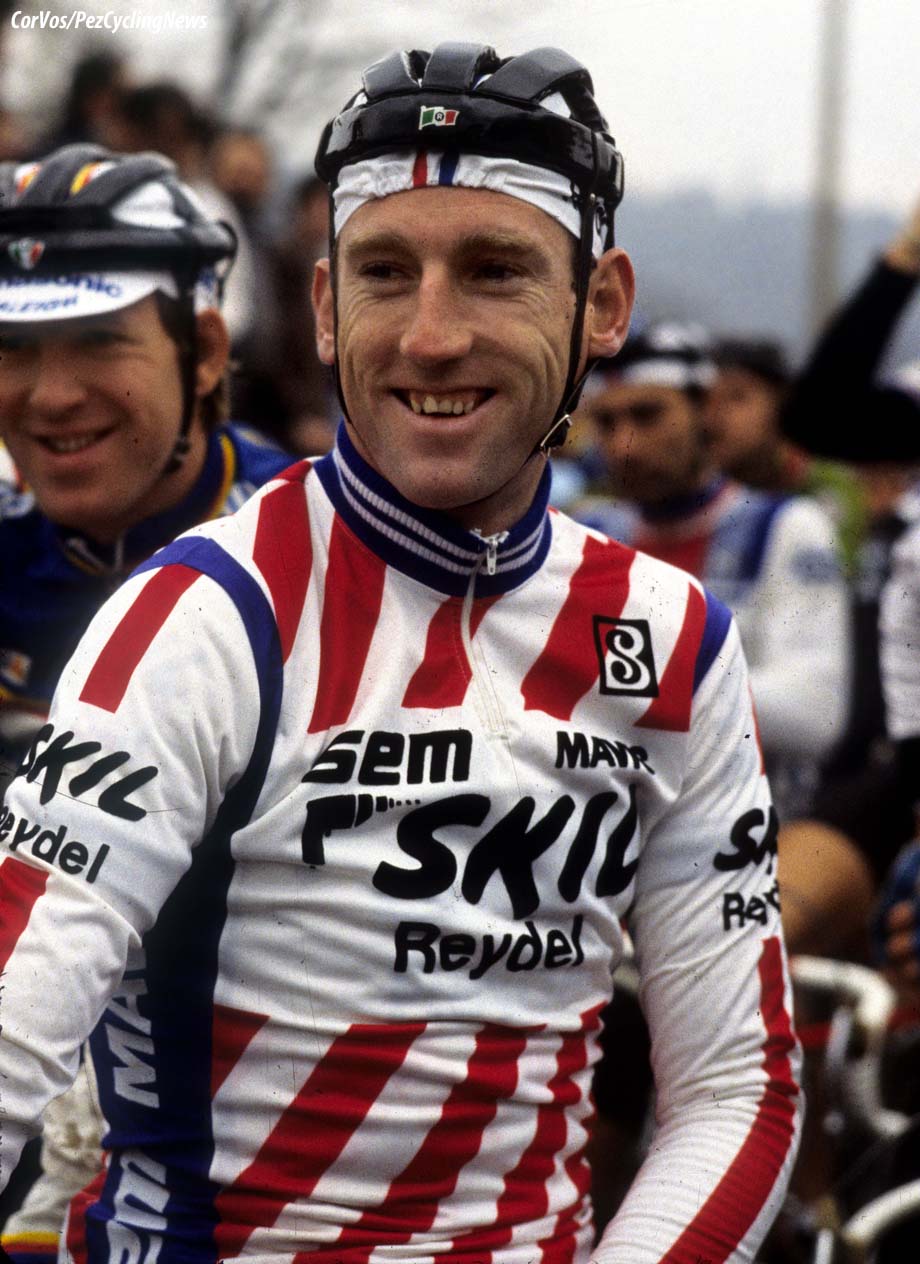 # La Vie Claire
This is where we veer away from ‘classic’ and into uncharted waters; team owner, millionaire Bernard Tapie was always ‘different.’ Based on the works of influential Dutch artist Piet Mondrian – who believed that painting should be broken down to just lines and colours – the jersey grabbed a lot of attention at the time – and here I am, still writing about it. . . 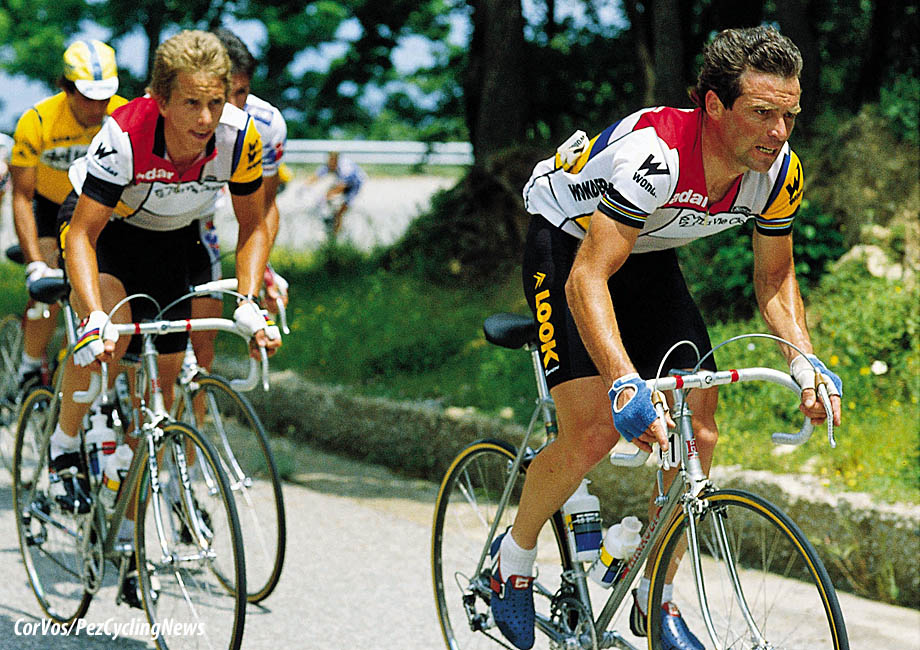 # Z
There was more 80’s maillot mayhem when the classic Peugeot black and white chequer jersey gave way to ‘comic book’ style when the children’s clothing millionaire, Roger Zannier took up the sponsorship. The jersey was so much a part of French sporting culture that the change generated huge Media interest – which is what jerseys are all about. Probably best modelled by Ronan Pensec with his Tin Tin quiff allegedly the man Zannier most closely identified with the ‘look’ he desired for the team. The 90’s gave us some of the most talked about jerseys ever to be aired in the peloton – love them or hate them, we’re still debating them so for the designers’ ‘job done.’

# TonTon Tapis
I have to tell you, I love this jersey, I always wanted to have a beer with ‘Uncle Carpets’ – that’s the guy lugging the rug – I just knew he’d have a mullet, basket weave topped slip-on shoes and smoke like a chimney. This jersey says to me; ‘Belgium!’ 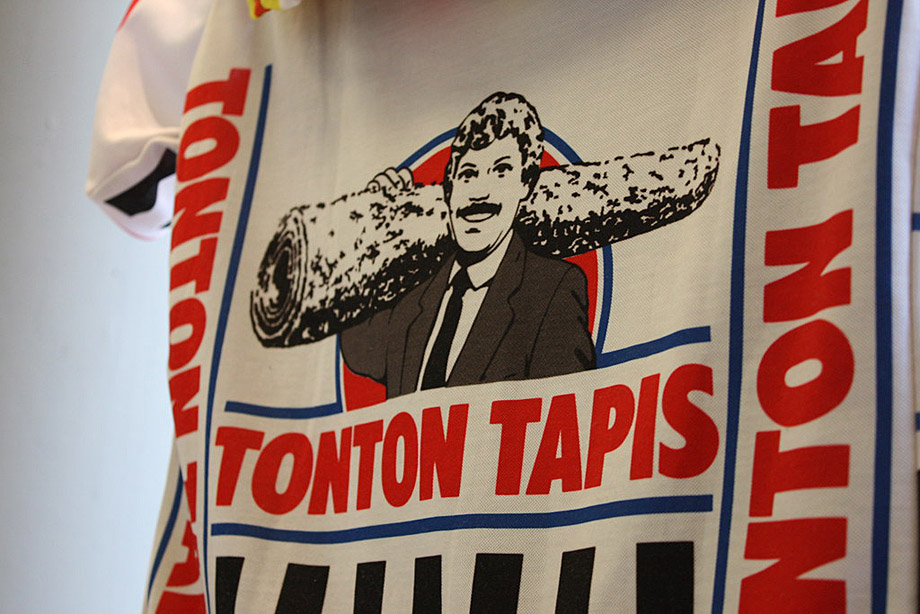 TonTon – No mistake what they sold. Nice rug, too.

# Castorama
Branded by many as an abomination – it was supposed to represent ‘bib and brace’ overalls, Castorama being a huge hardware chain – but it was ‘different’ and got folks talking. And here I am 30 years later still writing about it. 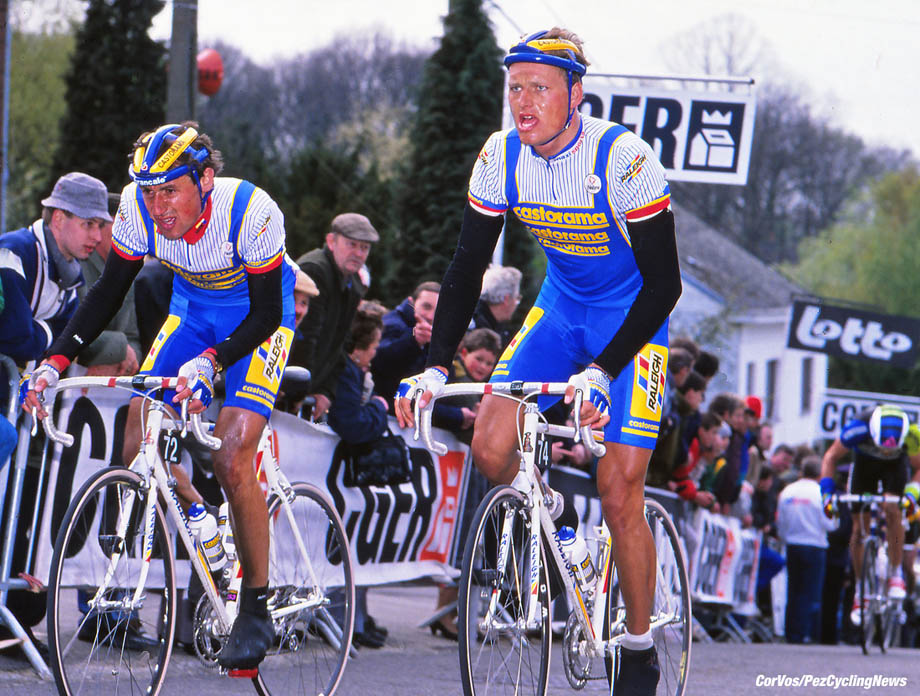 # Mapei
The predecessor to Patrick Lefevere’s QuickStep and Deceuninck ‘super squadra’ – again, very different but colourful and unmistakable, albeit many hate it. And you’ll still see those ‘molecular structure’ graphics on bags of Mapei building products. 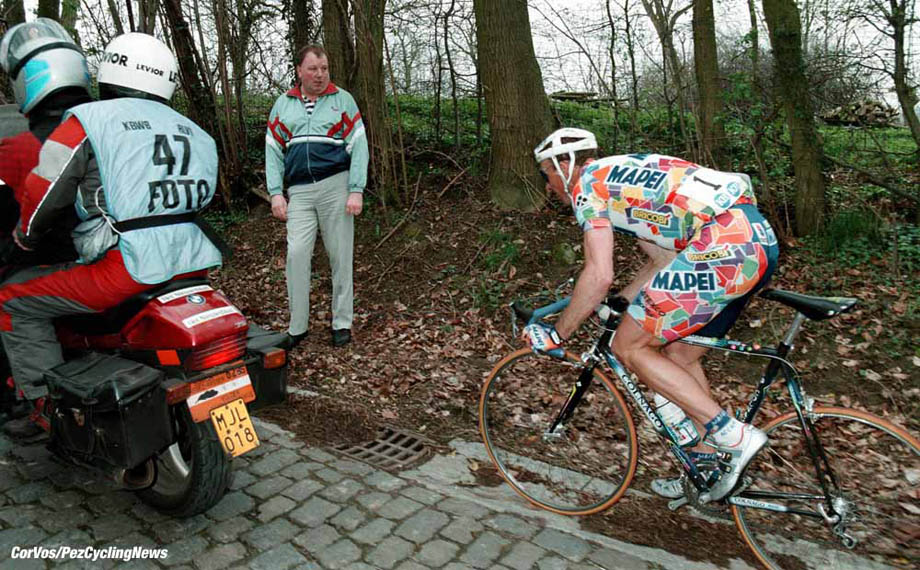 # Motorola
And again it was those Americans giving us Euros a lesson in tasteful jersey design; there were a few incarnations through the years but all cool, timeless jerseys. I’m kinda struggling with the new millennium – but a couple come to mind. 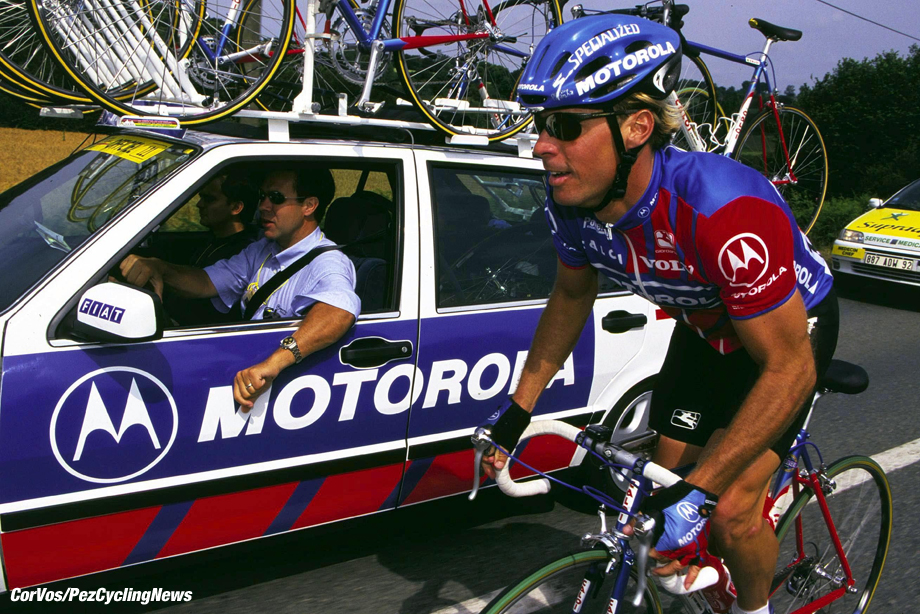 Nice use of red and blue for Motorola

# Française des Jeux
Clean, fresh and instantly recognisable in all of it’s incarnations – a nice strip.

FDJ over the years

# Aqua Sapone
If the team leader had been anyone other than Super Mario then ‘NO!’ But it was led by the big Tuscan, who revelled in gaudiness – Mario simply did not do ‘under stated.’ Just please don’t try and tell me that his winning on the Via Roma in 2002 in that strip wasn’t a fabulous image. 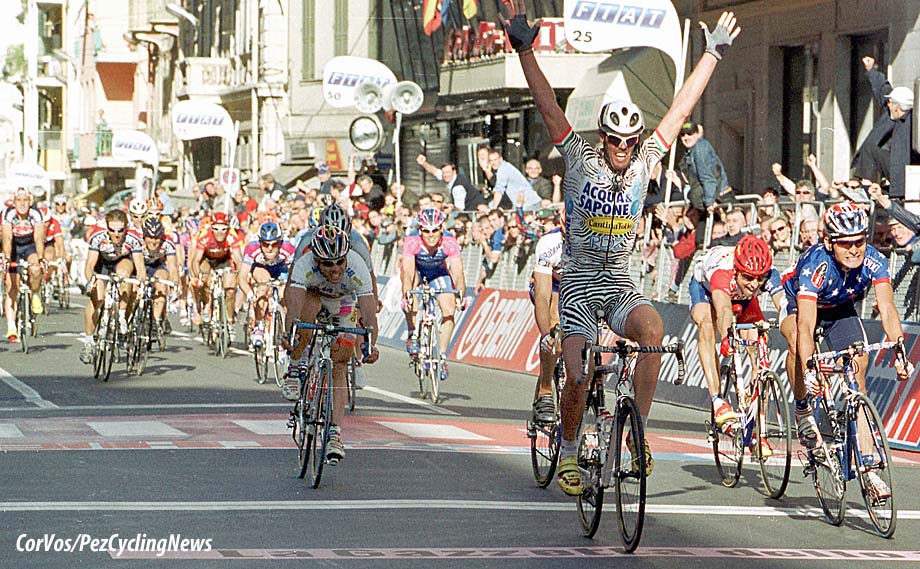 # Euskaltel
The orange strip, to really appreciate this strip you had to be high in the Pyrenees among the orange T-shirted legions when one of their boys rode past – a near spiritual experience. 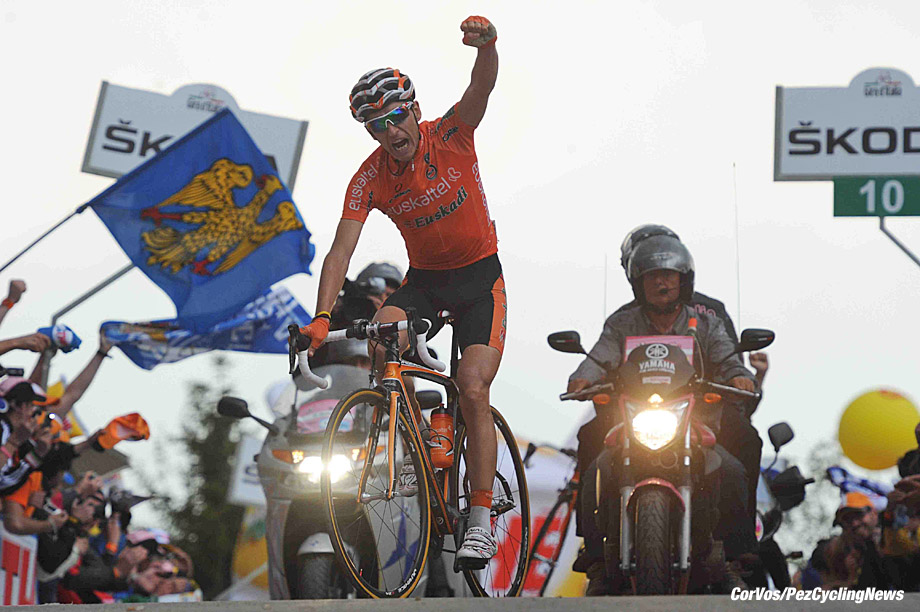 # Movistar
Of recent offerings, there’s not much knocks us out right now but those Movistar dudes always look the part – but we liked the dark blue strip better.

Movistar – What it says on the packaging

# PEZ
And whilst it’s not WorldTour (yet) the maglia PEZ has been around more than just about every pro team jersey; your scribe’s favourite? The one which borrows just a little from the Kelme jersey.

The three classic PEZ jerseys, and all the others, can be seen and bought in the PEZ SHOP.

I wonder if anyone has old ‘Uncle Carpets’ mobile telephone number?

The TonTon Tapis team launch in 1991