The Comeback Men of the Pro Peloton!

The Successful Comeback Men: Lance Armstrong cemented his comeback from cancer with his Tour de France wins, then lost them, partially due to his second comeback. Ed Hood takes a look at ‘Big Tex’ and thirteen other comeback men from the pro peloton, just to show it can be done. 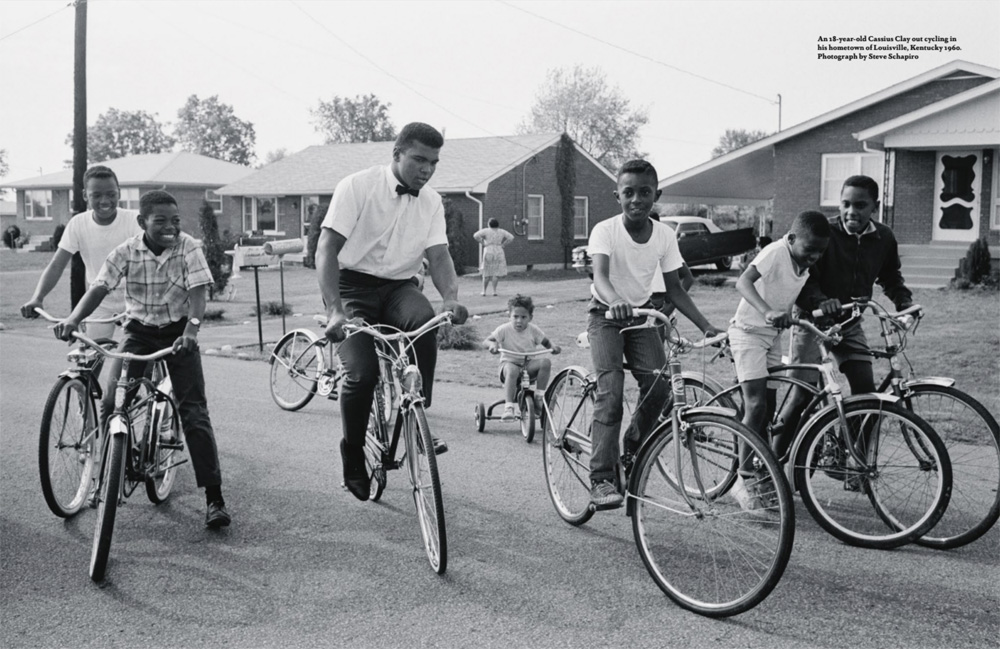 Muhammad Ali didn’t make a comeback on the bike

What is it they say in boxing? ‘They never come back.’ In our ‘King of Sports,’ happily that’s not always the case. 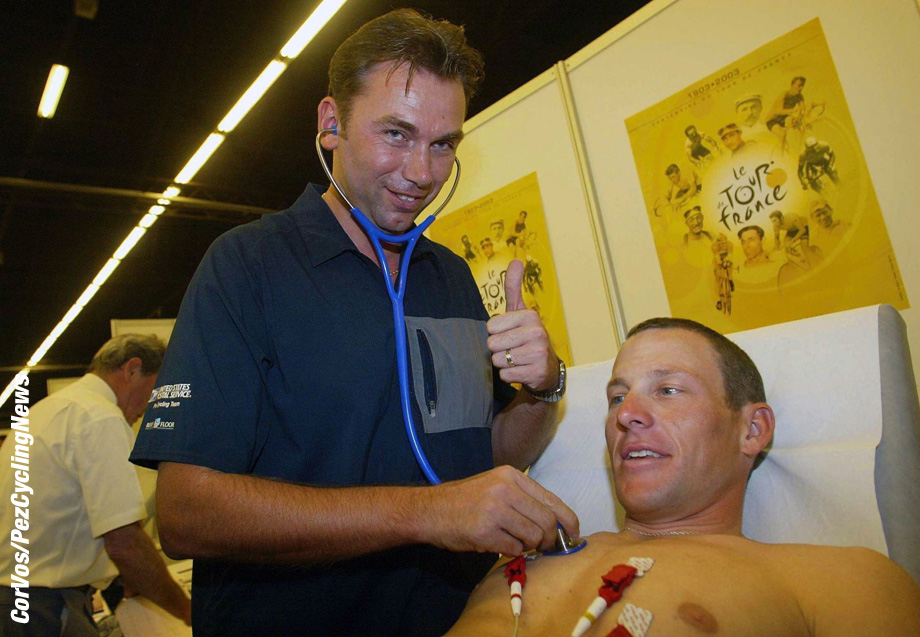 Let’s start with possibly the most spectacular of them all, a certain Lance Armstrong. Whatever else the man has said or done over the last two decades his ‘come back’ was little short of miraculous. He was literally at death’s door, his body and brain invaded by cancer, but dragged himself back to the top of the – albeit deeply flawed – monster which was Professional Cycling of that era. He still gives hope to so many people. . . 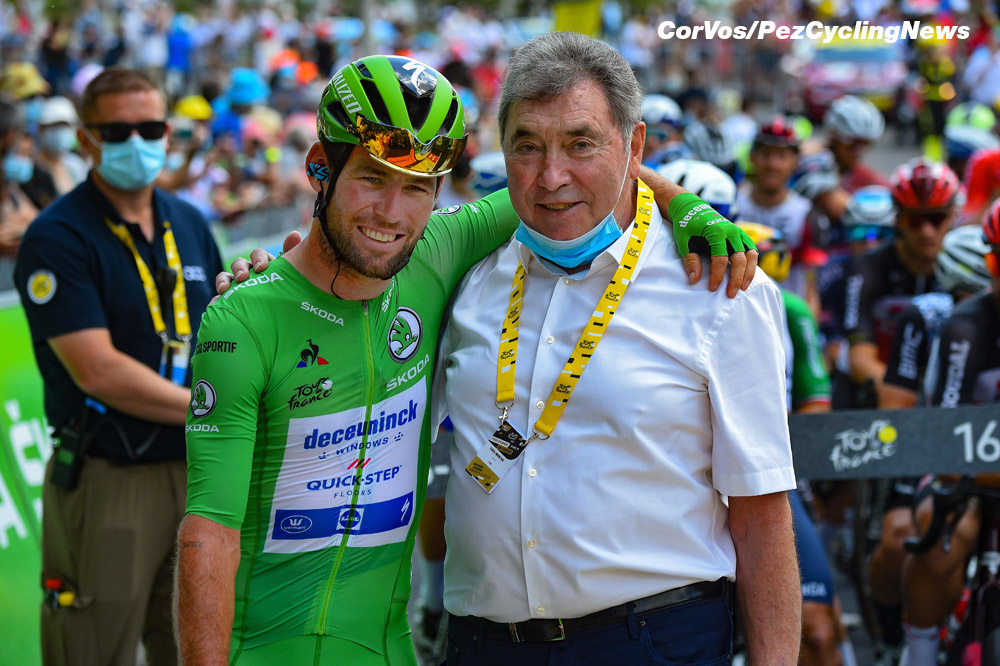 I must confess, I thought that The Manx Missile had won his last Tour stage. Crashes, injury, depression, contract wrangles had all played their part in his decline. But my eyebrows raised a little with his stage wins in the Tour of Turkey – Jasper Philipsen is no slouch. Then came the Bennett/Lefevere spat and Deceuninck needed a sprinter for the Tour de France. The rest is history and a major, CHAPEAU to Mr. Mark Cavendish, certainly the most talked about comeback of recent seasons. 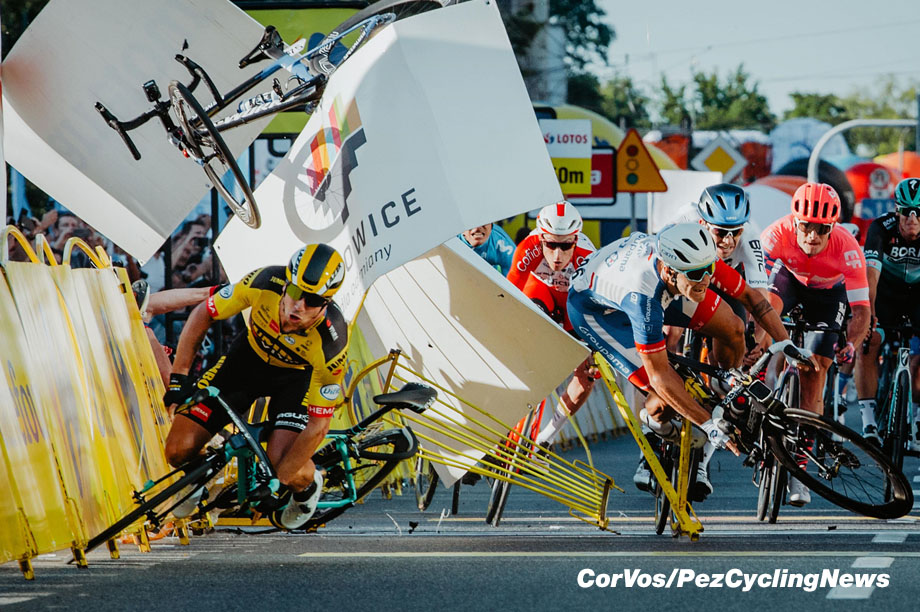 Not many would come back from this crash

Sticking with Monsieur Lefevere’s team, and the man whose return may preclude aforementioned Cav from taking that 35th Tour stage, it was wonderful to see Fabio Jakobsen back to his sparking best with three stage wins and the green jersey in the Vuelta then taking the Gooikse Pijl and Eurometropole Tour. If you wondered how badly hurt he was in that Tour of Poland crash in August 2020, here’s the man’s own description of his injuries: ‘Brain contusion, skull fractured, nose broken, palate broken and torn, 10 teeth gone, parts of my upper and lower jaw gone, cuts in my face, a big cut in my auricle [part of the ear, ed.], broken thumb, shoulder contusion, lung contusion, the nerve of my vocal cord took a heavy blow, heavily bruised buttocks.’ A remarkable recovery by one tough and talented young man. 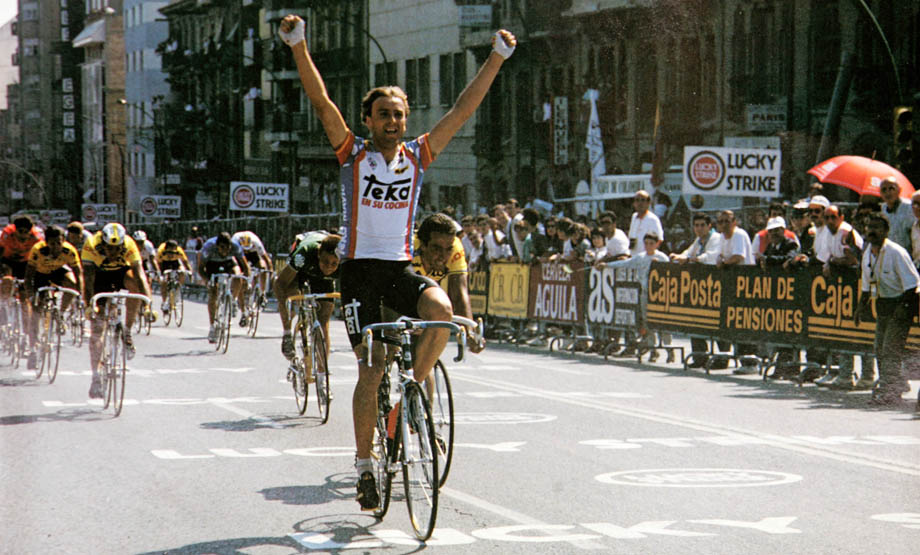 ‘Malcolm Elliott was cool, and fast’

Sheffield’s Malcolm Elliott was cool, and fast. As an amateur he could win for fun – road, criteriums, track, time trials, hill climbs, he was pure class. He was a double Commonwealth Games Champion in 1982 – road race and team time trial. He turned professional with Raleigh then went to ANC for whom rode the Tour de France in 1987. Thereafter he won three stages in the Nissan Tour of Ireland that year and was snapped up by Spanish professional team, Teka. A glittering career followed; Vuelta stage wins and points jersey – and a raft of stage wins in the likes of the Tour of Britain, Catalan Week, Tour of Aragón, Castilla y León. . . He then moved to the USA where he was again a prolific winner. His career ended, as they do. But, a decade later, tired of going to the gym to keep fit he got back on the bike and was soon winning bike races again. He turned pro again with former cycling champion and bike clothing and equipment entrepreneur, Phil Griffiths’ – who was also Elliott’s DS back on the ‘87 Tour – Pinarello team and at 47 years-of-age was back winning professional bike races in the UK – remarkable. 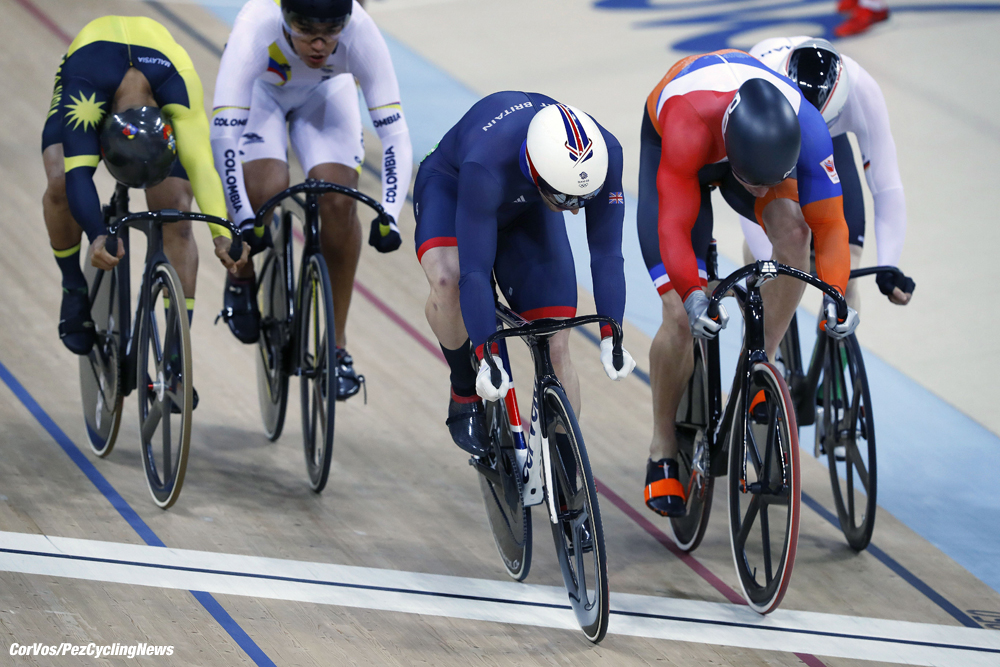 Once dominant British sprint kingpin, Jason Kenny looked to be another victim of the Dutch Sprint Behemoth of recent years at the Tokyo Olympics, this year; ‘yesterday’s formerly fast man.’ But in the Tokyo keirin final there was a moment of hesitation, old fox Kenny, seized it and there’s now another Olympic gold medal in his trophy cabinet. 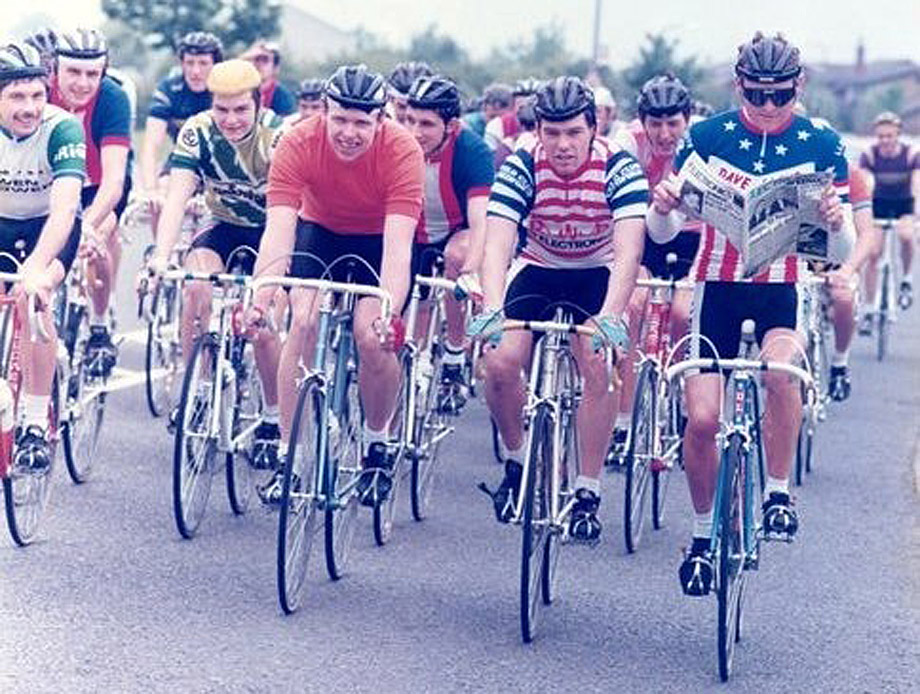 Was it too easy to comeback the second time for Dave Lloyd?

Back in the 70’s Liverpool’s Dave Lloyd went from chain smoker to winning the Grand Prix William Tell in Switzerland – one of the world’s top amateur stage races of the time – in just a couple of seasons. He turned pro with Raleigh and recorded some highly encouraging results, top five in a Tour de Suisse TT stage against the highest quality opposition among them. But heart problems ended his professional tenure. However, the competitive fire still burned and whilst his heart wasn’t up to the rigours of six hour continental classics, it could certainly cope with British domestic time trials. He came back to became a prolific winner against the watch; 125 wins off 133 starts is surely an unrivalled ‘stat.’ Having won just about everything there was to win at British domestic time trial level, he turned pro again. And now, at 72 years-old he’s still churning out the miles. 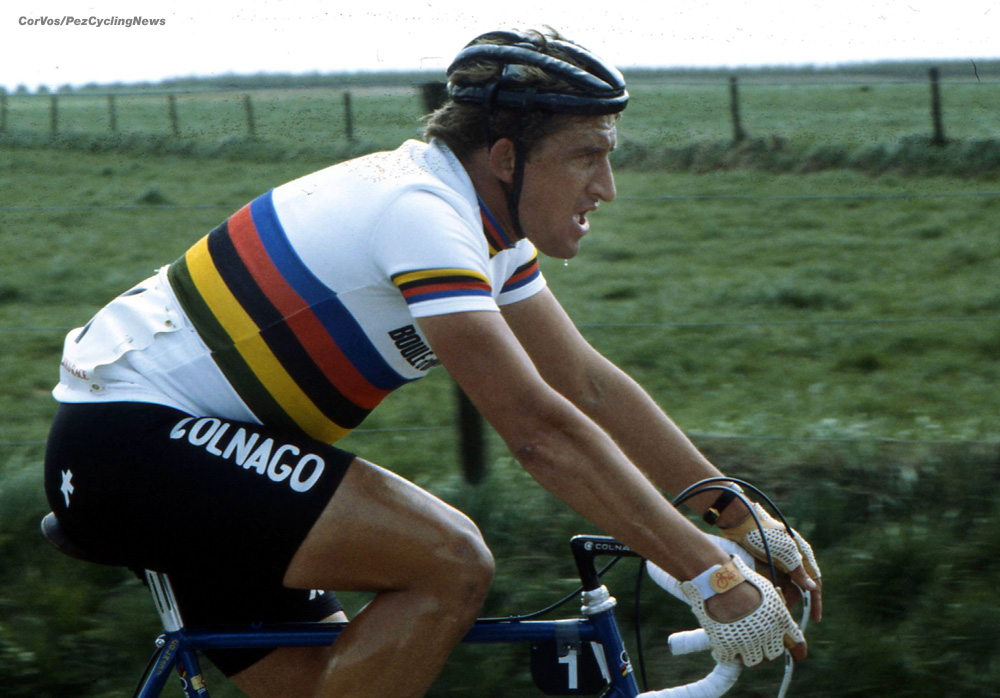 Freddy Maertens at his peak was winning more than 50 professional races each season, in an era when he was racing against the likes of Eddy Merckx and Roger De Vlaeminck, two of the all-time greats. Freddy was a classics winner, Tour de France green jersey and won 13 stages en route the overall win in the Vuelta. Then came the crash in the 1977 Giro, his wrist was broken and steadfastly refused to heal – for reasons we won’t explore here. He struggled for several seasons to regain form but it just wouldn’t come. He seemed finished; but then came the 1981 Tour de France and to general surprise, Stage One went his way. Fast Freddy was BACK, Stages Three, 12, 13, 22 and the green jersey followed and so too did the World Professional Road Race title in Prague. And then? Not much – but ’81 had been glorious. 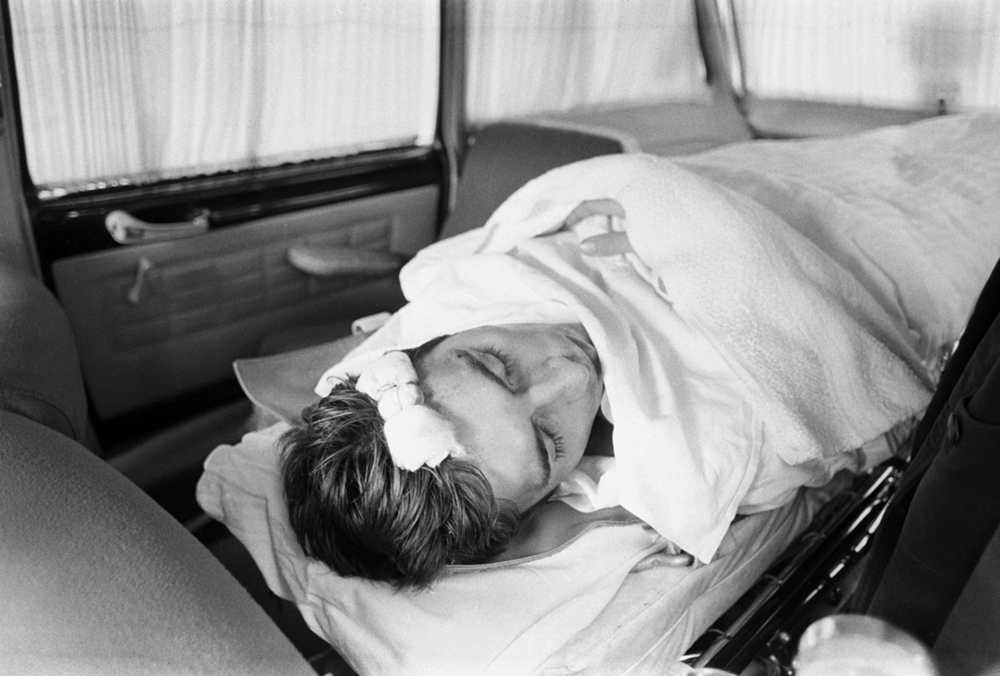 The question is; ‘what would Eddy Merckx have achieved had he not had that crash on the concrete velodrome at Blois on 9th September 1969?’ It was a post-Tour crowd pleasing event on the Velodrome, Merckx was competing in a Derny paced omnium when a Derny ahead of him and his pacer, Ferdinand Wambst crashed. The duo couldn’t avoid the stricken machine and they both went down hard with poor Wambst dying en route to the hospital. Merckx sustained a concussion, whiplash, trapped nerves in his back and a displaced pelvis. He remained at the hospital for a week before returning to Belgium where he spent six weeks in bed. He said he was; ‘never the same again’ and the injuries he sustained accounted for his perpetual tinkering with his position on the bike. 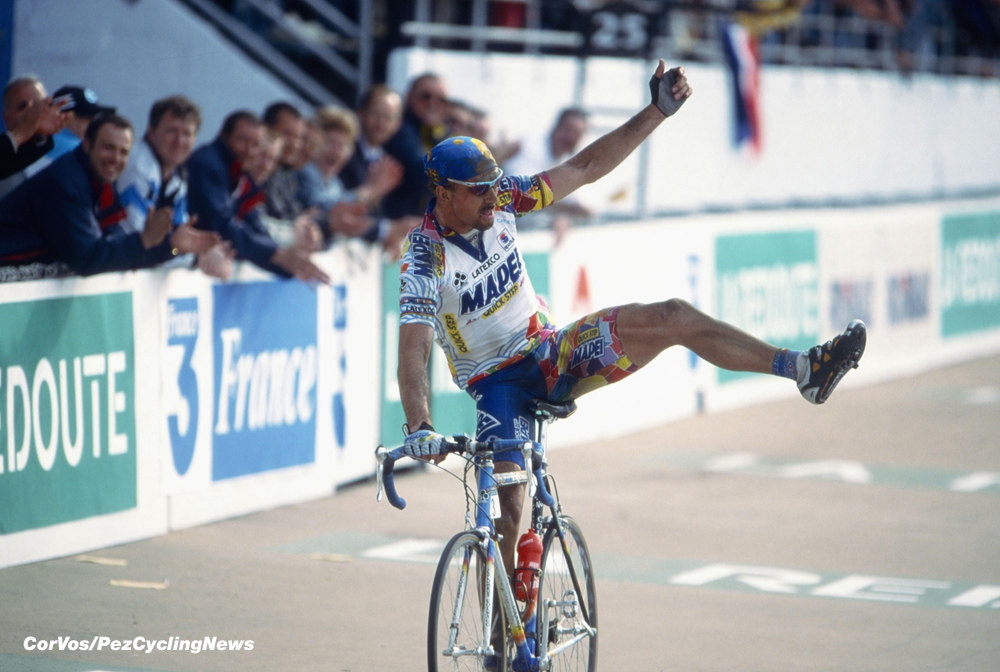 Johan Museeuw and the leg he nearly lost

To the uninitiated it looked bizarre, a man winning one of the biggest one day races on the planet and instead of throwing his arms to the sky he unclips from the pedal and points to his knee. Johan Museeuw was the man and what his gesture indicated was that he was BACK – from the crash he’d suffered in the Arenberg Forrest in the race two years previously edition Paris-Roubaix. It was a crash which saw him almost lose his leg due to a gangrenous infection but which the Belgian fought back from to win again – and again. Museeuw was one of the last real Flemish hard men, the sport is the poorer without him and his like. 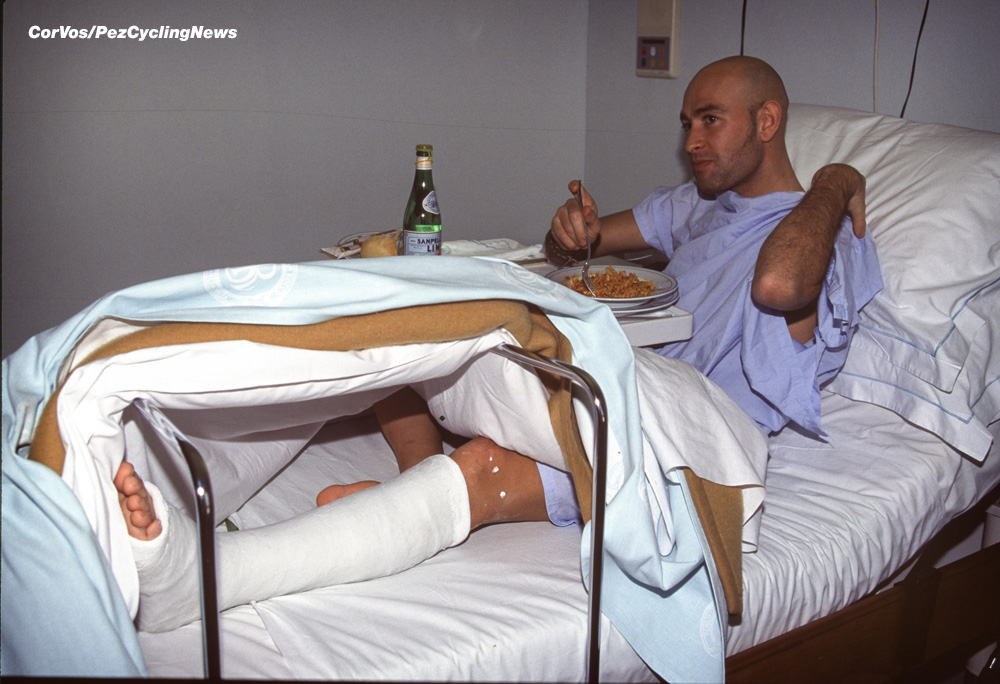 The late Marco Pantani is another man ‘with a past’ which we’re all too well aware of but the man’s return from a serious crash in 1995 proved beyond doubt that he had grinta. Not long after taking bronze in the World Road Race Championship in Colombia, whilst hurtling down the drop off the Superga climb in Milano-Torino he had a head-on collision with a four wheel drive vehicle which a young policeman had mistakenly allowed back on to the still closed percorso. Pantani suffered compound fractures of his left leg breaking both fibia and tibia with the bones badly splintered. Months of pain, physio and rehab followed – but love him or hate him, he came back with a vengeance. 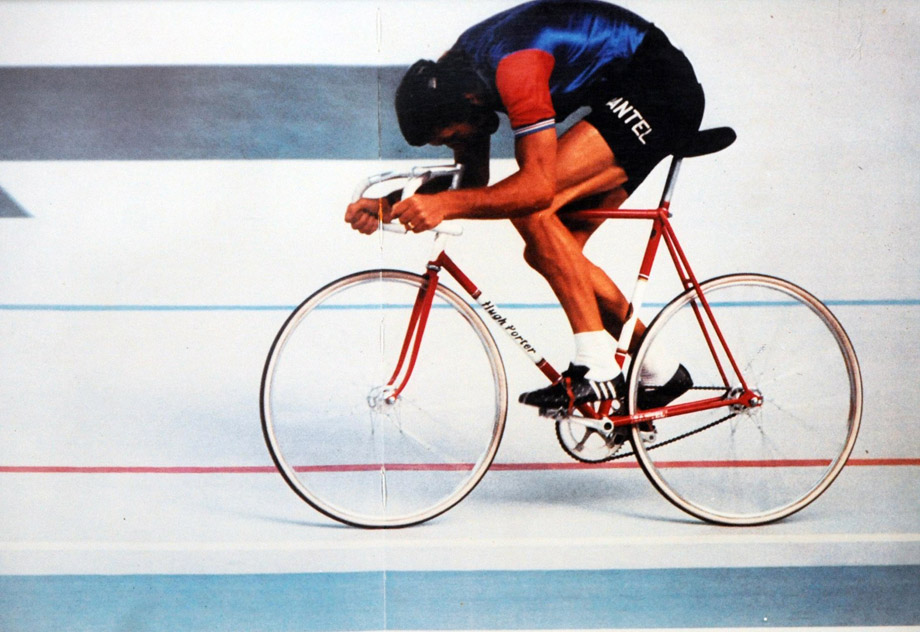 Hugh Porter – ‘Not bad for an old man’

Hugh Porter has a record which can never be beaten, four times World 5,000 metres Professional Pursuit Champion. But in 1971 his motivation wasn’t at the highest and bronze was as good as he could achieve. The man who won that year, Belgium’s Dirk Baert, when asked about how it felt to beat pursuit legend, Porter said; ‘well, he’s an old man.’ A year later, Porter’s head was back where it should be and as the gold medal dangled around his neck, he told bronze medallist, Baert; ‘not bad for an old man, eh?’ 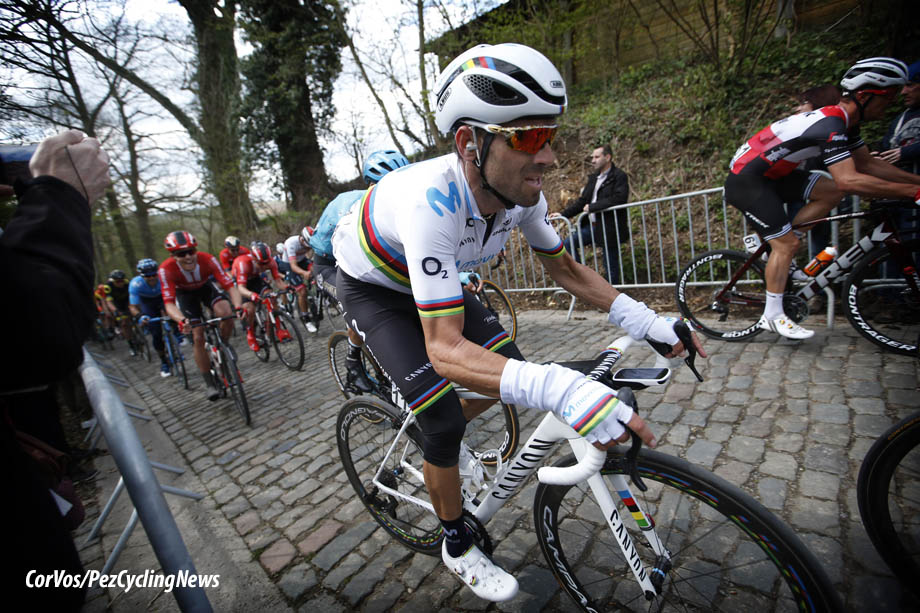 Valverde – A long and successful career

Alejandro Valverde, another ‘love him or hate him’ dude, but he’s a remarkable man; it will 20 years come season 2022 since first he joined the professional peloton. Yes, ‘he kitted up;’ but, it’s much quicker to list those who didn’t in that era, just before he was hit with his two year suspension, losing all of his 2010 results and sitting out season 2011. He came back in 2012 and within days was winning again – and make no mistake he’s tested at every hands turn by the UCI, including when he won the Championship of the World in 2018, at 38 years 158 days, as I said, a remarkable man. 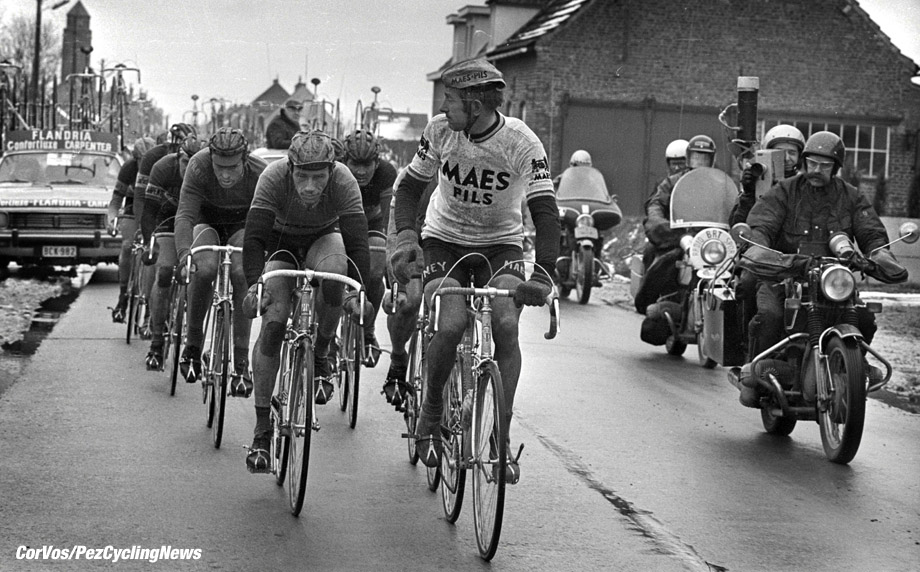 Frans Verbeeck – As hard as they come from Flanders

The story goes that ‘Flying Milkman’ – for that was his calling before he became a Flemish Cycling Legend – Frans Verbeeck had ended his low key pro cycling career but went to see a pro kermis with his dad. Verbeeck was so unimpressed with what he saw that he moaned about it all the way home in the car, finally his dad said; ‘Look, if you think you can do better then get back on your damn bike!’ He did, but got a lot more serious about his training, going on to become a prolific winner, including: Amstel Gold Race, Omloop Het Volk, Belgian Professional Championship, GP E3, Brabantse Pijl. . . 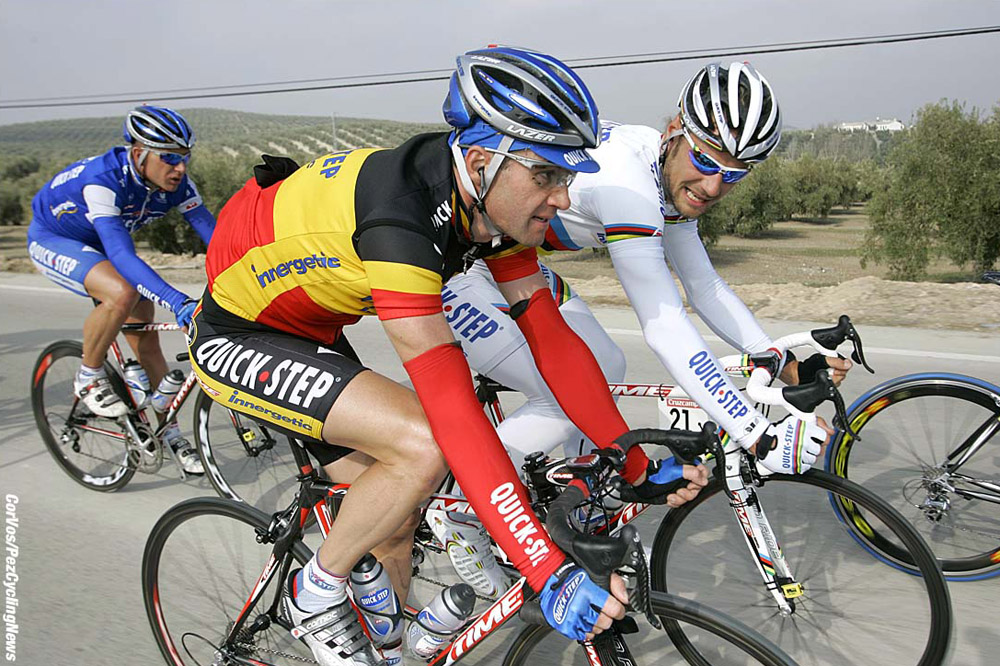 And to close, a gentleman who my editor, Alastair reminded me about but who is sadly no longer with us, he died of cancer of the colon in 2017 at just 47 years-of-age, Serge Baguet of Belgium. A solid amateur career netted him a stagiaire ride with Lotto in 1990, he signed a contract with them for 1991 and remained on the team until 1995 then joined Vlaanderen 2002 for one season but the fire had gone out and he went back to his trade as a roofer. Legend has it that one of his DS’s from Lotto was driving past the house where Baguet was working, some four years later and told him to get down out of there, hang up his nail bag and shave his legs, there was a contract waiting for him, if he wanted it. Baguet complied, riding for Lotto for five seasons then a further two for Quick-Step with his comeback cemented by a Tour de France stage win in 2001 and the Belgian Elite Road Race Championship in 2005 proving that they CAN come back. . . 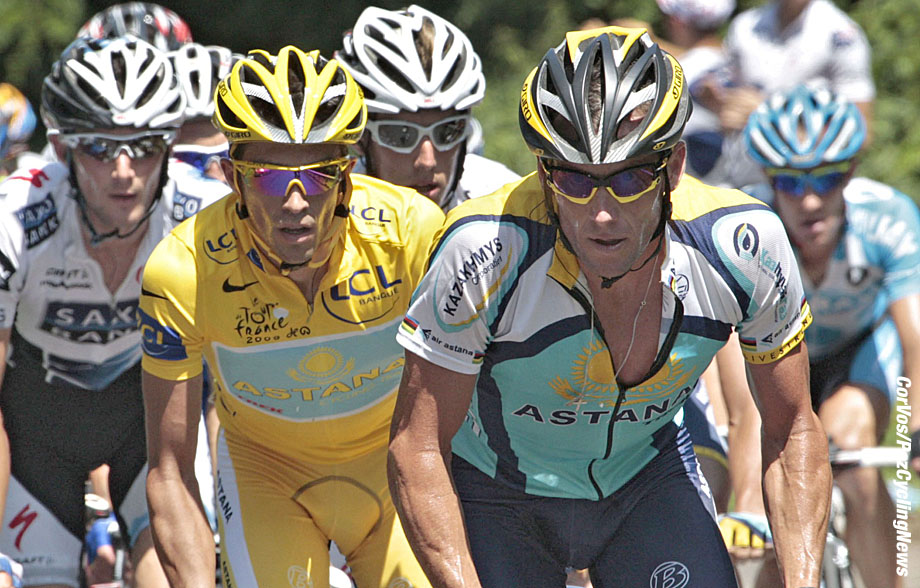