The Contador Case: What Now?

It took 566 days to suspend Alberto Contador for his positive test for clenbuteral at the 2010 Tour. The suspension of another champion is indeed bad for cycling, but even worse is the murky mess created by such a drawn out ruling process.

Since word of the CAS ruling on Alberto Contador first broke, the cycling media has been inundated with opinions by former champions, current riders and cycling fans as to whether his suspension is proper. Oscar Pereiro, winner of the 2006 Tour de France, ranted on twitter that it was the case of another Spaniard being punished without proof of crime (referring to Alejandro Valverde’s suspension for Operacion Puerto). Eddy Merckx opined at the Tour of Qatar that the ban “went too far,” while Andy Schleck issued a press release stating “this is just a very sad day for cycling.” 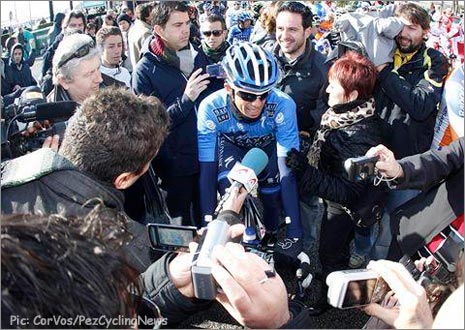 Whether the two-year suspension is proper will be debated throughout the cycling community for years to come. Some people are of the camp that believes Contador’s positive test for clenbuteral is tied to plasticizers and a prior blood transfusion. Some believe him to be innocent and find credibility in him contaminated meat theory. Yet others will assert that independent of its origin, Contador tested positive for a banned substance for which there is no threshold requirement and should therefore be punished. Regardless of your point of view, there are significant questions that professional cycling will have to answer in the wake of this affair, one of which is whether the current system to fight doping is adversely affecting the sport’s integrity.

Through a recent press release Andy Schleck stated, “The only positive news is that there is a verdict after 566 days of uncertainty. We can finally move on.” But is Schleck right, can we really “move on?”

Professional cycling has had its share of doping scandals, and many of them involving the sport’s most prolific stars. From Floyd Landis to Michael Rasmussen, to Jan Ulrich and Ivan Basso, cycling has seen its share of Tour de France contenders have their careers significantly stunted or even ended as a result of doping allegations. But for every Riccardo Ricco, there is a David Millar who readily admits his mistakes and returns to racing dedicated to correcting his wrongs and leaving the sport a better place than when he found it. Thomas Frei is a prime example of this. In 2010, Frei tested positive for EPO around the time of the Giro Del Trentino, given a two-year suspension and was released from Team BMC shortly thereafter. Since that time Frei has been one of the most active proponents of clean cycling by taking the unprecedented action of regularly posting his biological passport data and blood info to the public during training. It is men like Millar, Frei and others that lead me to believe that in the midst of the third stripped Tour de France champion in history, our sport will continue to make process in the fight against doping.

The issue is not whether cycling can survive positive doping tests from its champions. Rather the issue is whether cycling can survive what comes after the positive test occurs. The Contador matter took over 18 months to unfold, and with the possibility of a further appeal it might still not be over. The Court of Arbitration for Sport (CAS) used its abacus and double secret probation algorithm to backdate the suspension so that a two-year term amounts to little more than six months. While some view suspension start dates as capricious and arbitrary, UCI Anti-Doping provisions credit time under provisional suspension once notice of the positive doping control is first discovered and indicate suspensions will commence from when the doping incident first occurred. That being said, the bigger concern is that final rulings take so long to issue that would-be suspensions nearly run their course by the time the disciplinary process is completed.

Implications Beyond The Rider
The effects of such delay where the rider continues to race pending UCI and WADA appeals, as was the case with Contador, pose a significant threat to the integrity of professional cycling. First, the rider’s team is left in limbo for an indeterminate amount of time. Team Saxobank entered both the 2011 and 2012 seasons not knowing if the rider the team was built around would even be permitted to race. The team had a substantial amount of its financial resources tied up in Contador so that even if there were quality riders still available to come on board in time and salvage the season, there would not have been the funds available to sign them.

The uncertainty of a rider’s status also makes it extremely difficult to cultivate and maintain sponsors. In 2010, Saxobank stated that it would continue sponsoring the team for another year following news of Contador’s pending transfer. Saxobank was also able to obtain a co-title sponsor in Sungard. However, news of Contador’s positive test soon broke and the team raced the entire 2011 season under a continual cloud of uncertainty. Although the team won the Giro d’Italia and had top a 5 placing at the Tour de France along with other notable wins such as Flanders, Sungard elected not to continue is sponsorship for 2012. While there is no concrete evidence linking Sungard’s change in sponsorship status to Contador’s positive test, the continual cloud of suspicion that hung over the Spaniard’s head certainly didn’t help matters. Saxobank now faces the very real possibility that it might be stripped of its Pro Tour status as a result of losing all points Contador obtained in 2011, since he alone was responsible for 68% of the entire team’s Pro Tour points.

More concerning might be the damage that a case like Contador’s does to the races themselves. The 2011 Giro d’Italia was regarded as one of the most difficult grand tours of the modern era. Organizers were aware of the very real possibility that any results by Contador could have been taken away once the CAS issued its ruling. Yet Giro organizers had to grit their teeth and hold their breath for nearly nine months to find out if their race would be hijacked. Matteo Pastore, Head of Public Relations for Giro organizer Rcs Sport, underscored this problem stating “We hope that in future, the judicial process will ensure that the Giro d’Italia never has to face a similar situation out of respect for its fans and the riders who compete in its races.” Like his wins at the Vuelta a Murcia and Velta a Cataunlya, RCS Sport now begins the messy process of removing Contador’s victories from their record books.

Rider sentiments on the matter are also telling. In May, 2010 Alejandro Valverde was permitted to race when his national federation RFEC refused to sanction him upon evidence of his implication in Operacion Puerto. Following his stage victory and overall classification at the Tour of Romandie, Valverde, whose eventual suspension was a forgone conclusion to everyone following the UCI appeal, attained the top ranking as the number one rider in the world. Then Garmin-Transitions rider Danny Pate summed up the sentiments of many in the peloton when he tweeted the next day, “Woohoo, Valverde won another race….. Cool…. Thanks a lot Spanish Federation, UCI, and WADA.” Pate, like most everyone else knew that once the CAS issued its suspension, Valverde’s Romandie title as well as his number one ranking would disappear.

From a due process perspective, it is understandable that riders should be able to race until such time as they are ruled to have violated anti doping regulations. Preventing Contador from racing after being cleared of wrongdoing by his national federation simply because of a pending appeal would most certainly violate his due process rights. But what if those due process rights could be used to further harm the races themselves? What if instead of trying to win the Giro, Contador instead rode exclusively in support of his teammates and those teammates acquired stage wins and general classifications based heavily on his work? Are those results fair when Contador is found guilty and suspended? If his individual results are subject to forfeit, should the results of those teammates he worked for also be forfeit? A rider who anticipates suspension would be able to file numerous appeals and delay a final ruling in time to conceivably race in support of teammates so that sufficient World Tour points can be attained in order to lessen the impact on his team when the suspension is finally issued.

Why So Long?
The question then logically turns to the issue of why so much time is needed to rule on doping allegations in the first place. Historically it has taken a substantial amount of time for doping cases to come before CAS and have a final ruing issued. Floyd Landis’ case for example took nearly two years from the date of his positive doping control, and that wasn’t even the longest. Somewhat comically, the CAS announced this morning that it was handing Ulrich a two-year ban for his participation in the blood doping scheme of Dr. Eufemiano Fuentes that was uncovered in Operacion Puerto in 2006. Although officially retired for several years now, it surely comes as a relief to Ulrich that a decision was finally reached a mere six years after his case was first opened.

Turning to Contador’s case specifically, why was so much time needed to reach this ruling? Reports state that Contador’s case before the CAS encompassed over 4,000 pages of documents. Presumably this includes scientific evidence and testimony as to the mad cow clenbuteral addictions of Spanish Beef, the validity of plasticizers to prove blood doping and whatever else the parties could throw at the panel to prove their case. Extensions were given so that more data could be provided, and delays occurred so that this data could be analyzed and evaluated. Some expert witnesses testified and others were prevented from testifying for unspecified reasons. Yet all the posturing, all the research and all the testimony that took 566 days to obtain and evaluate were all for nothing. In the end the CAS rejected both Contador’s claim of contaminated beef and the UCI’s and WADA’s claim of a prior blood transfusion as probable but unlikely sources of the clenbuteral.

At the end of the day CAS wanted proof that either scenario likely occurred. For all the posturing and rhetoric by both sides, this proof was lacking. But the inability to conclusively establish either scenario was known by all shortly after RFEC issued its initial one-year ban back in January 2011. Say what you will about validity of the CAS ruling that a contaminated supplement was the likely cause of the clenbuteral, the reality is that this hypothetical is no less plausible or provable than the others.

Fabian Cancellara perhaps summed it up best when recently probed by Cyclingnews for his thoughts of the process. “To improve, CAS just has to work harder and faster – they should not be on holidays, and not be distracted by other things. In sport across the board so far, from the CAS point of view, this is one of the biggest delays there has been. 556 days? Plus or minus? We were told August, then November, then January and we have to wait until February. This waiting has damaged our sport.”

No matter where your opinion lies as to Contador’s innocence or guilt or the propriety of the CAS’s ruling, one thing is certain. Doping cases are like band aides on skin: rip them off quick and the pain is temporary; but pull them back slowly and the pain can last forever.