The Devil: A Photo Retrospective

Pro cycling seems to be losing a lot of big names this year to retirement and to that long list we can add Didi Senft – better known as the “Devil”, the man who almost single-handedly created the roadside craze of dressing up in costume to cheer on the race. Here’s a very PEZ-look back at our own encounters with the man who started it all.

It seems you can’t run a decent cycling event these days without a host of fans turning up in any kind of costumes – and while the goofy get-ups do add an air of “what the hell – did you just see that guy dressed as a (fill in blank)”… the good old days of ‘dressing for fun’ have been replaced by a mass narcissism that is simultaneously quelled and fueled by one’s appearance on the tv broadcast. Ok – I’m all for self publicity (how do you think PEZ made it this far…), but when some fans forget that the show is still the race, and not what’s going on roadside, it’s fair to say the plot has been lost. 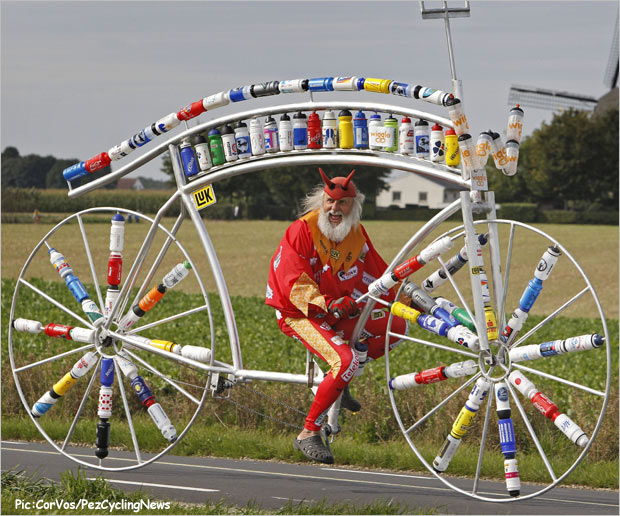 As well as his roadside hijinks, Didi Senft also created a big collection of contraptions best classified as ‘art bikes’.

But it wasn’t always like this, and it wasn’t that long ago – within last 20 years really – when a roadside fan in costume was a rare sight indeed. The man who gets credit for starting the whole craze – the Devil himself – recently announced his retirement from “pro cycling”, or whatever the correct term is for what he does. A retirement of this stature can not pass by without some recognition of the man’s accomplishments – so I asked the PEZ-Crew to reminisce about our own personal encounters with the Devil.

Let’s set the Way Back machine for 2003 and the Tour de France, and my own first meeting with the Devil: 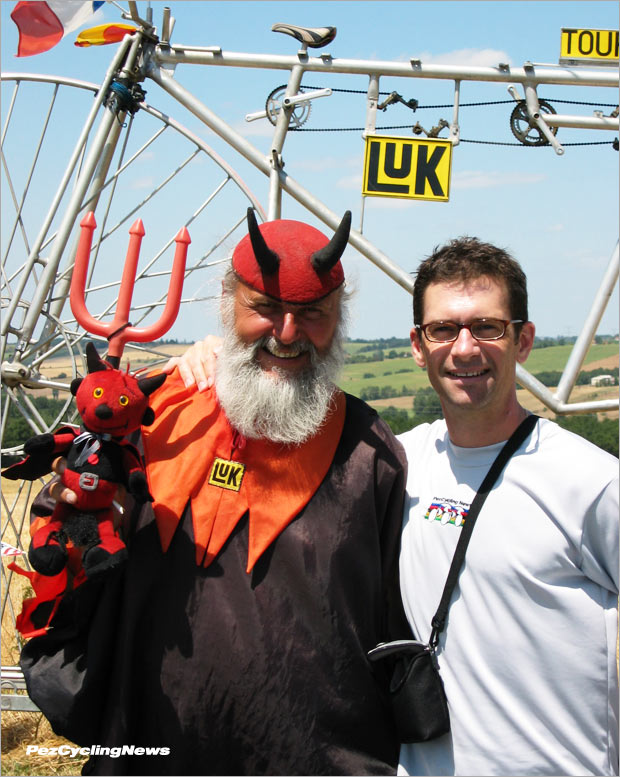 I first met the Devil at the 2003 Tour de France. A few things have changed since then.

The Devil, clad in his trademark red suit, complete with tail and pitchfork. I’d only ever seen him before on tv, and was thrilled to see him right there in person. It was hours before the stage was due, and he was talking with some other cyclists. I patiently waited my turn, then approached and asked for a photo. I spoke in English – he did not. He was all in for the photo-op, and I loved his staying in character from beginning to end – at least that’s how I’m remembering him.

He was soaked in sweat, and it was pretty obvious he needed a bath, but aside from his posing for my photo I had no idea if he understood anything I said. I certainly didn’t understand anything he said. But that didn’t matter – scoring my own photo with the Devil was a true right of passage for any pro cycling fan. 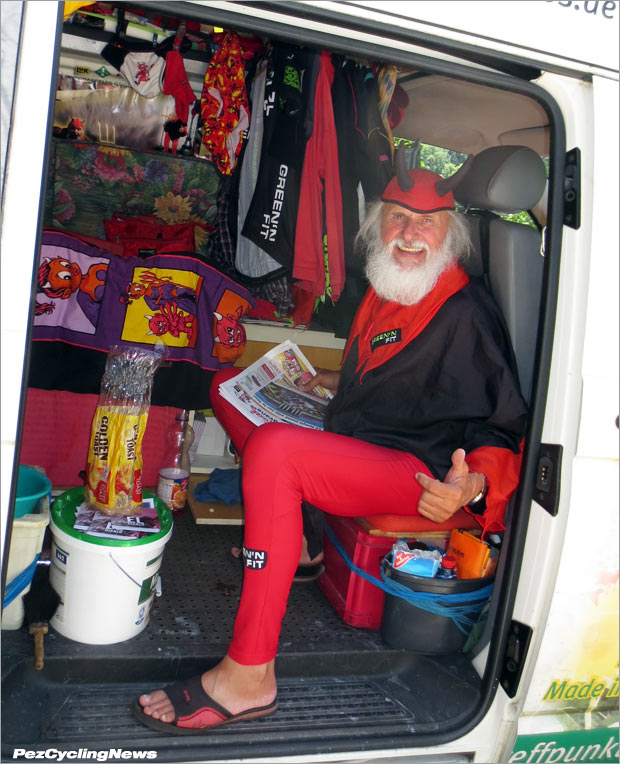 A rare photo of the Devil – NOT jumping around like a mad man – on the Palaquit climb of the 2014 Tour de France.

Over the years I would see him turn up at the Giro and other races, and most times I’d jump at the chance to grab another photo with Didi. He was always the same – never spoke any English, and always seemed to need a bath. Perhaps that was homage to his stake as a super fan – willing to forego even basic hygiene in the interest of chasing multiple Grand Tours for weeks on end, living out of his very small camper van (which I noted had grown a tad larger when I saw him at the 2014 Tour.)
– Richard Pestes 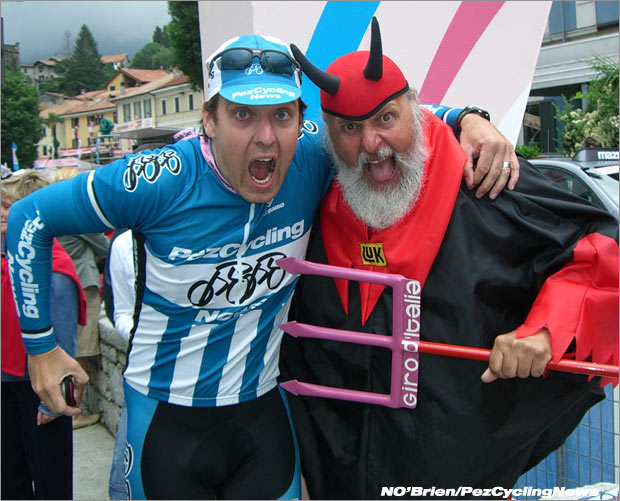 I met Didi several times at various Giro stages including this one in 2003 in Verbania, just as his commercial worth was beginning to “catch fire!”, never said a great deal (could have been the language barrier) but always had a great snarl and plenty of sponsors’ swag to offer round. What a super fan, he’ll be missed out on the roads, but I hope he rests up his trident and enjoys a chilled retirement safe in the knowledge he was the original and the best.
– Nick O’Brien
– chilterncyclingfestival.com 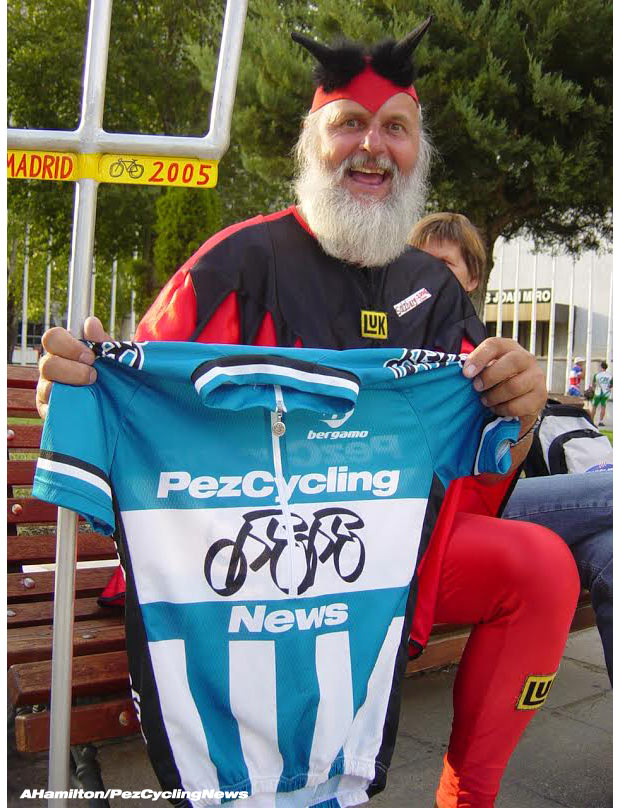 I only met the Devil once, it was at the 2005 World road race championships in Madrid on the Saturday evening ahead of the Pro race. Earlier in the day Pat McQuaid had been voted in as the UCI president and there were quite a few unhappy faces around. I was on my way to the conference hall and was hit by the strong smell of sweat and unwashed clothes.

Expecting to see a homeless person sleeping on a bench with a carton of cheap wine in his hand, I was surprised to see Didi holding his specially doctored trident with Madrid 2005 on it. Not to miss a chance I asked if I could take his photo with a PEZ jersey. He grunted what I understood as ‘yes’ and all was good. When asked for his prediction for the World road race the conversation was somewhat stilted, so I left it at that with a feeling that he was going to ask me for money. Good-bye Didi the Devil, what did you start?
– Alastair Hamilton 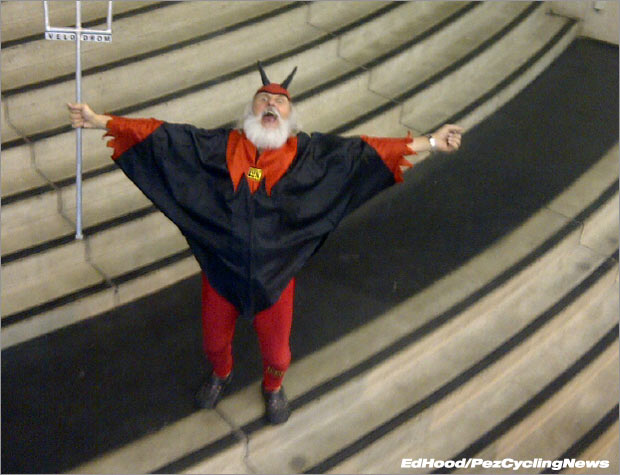 Didi, what to say ? A footnote, a chuckle for a moment or two – but I guess it’s hard not to feel sorry for the man. He was the original ‘crazy’ – but now among the giant feeding bottles, mankinis, penguins, Hulk Hogans, not one but two Elvises and all the other crazies the man is ‘common or garden.’ Put the trident in the closet, tune to Eurosport, crack open a cold one and enjoy le Tour on TV, dude.
Vaya con Dios, el Diablo…
– Ed Hood 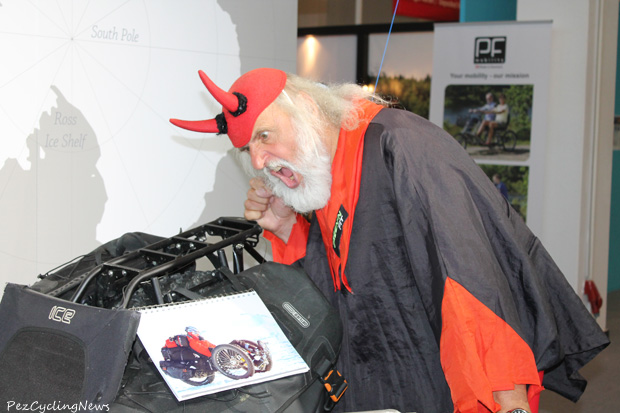 I’ve run into Didi a few times over the last 12 years or so following races and he’s always been very spritely, jumping around in his crazy way but this year at Eurobike he was looking his age and wandering around forlornly in his Devil suit that just like him – had seen better days. I’ve previously tried to chat to him in English with no luck so I tried this time in my admittedly rudimentary German but didn’t get very far either. He did however have a conversation with a snowmobile/recumbent with a series of gestures, grunts and screams where he was possibly pretending to be a polar bear. Didi is certainly one of a kind.
– Chris Selden

I had two minor, bizarre encounters with Herr Senft. I knew all about him from his regular Tour de France appearances at quiet spells in the TV coverage and from the chatter that the pros weren’t too keen on his exuberant presence.

My first meeting was on a baking hot afternoon in the middle of France, I forget where exactly it was, but the Tour press pack was jammed up on a broiling hot road as we waited for the caravan to clear up ahead of us. Windows down, camera on the passenger seat, car crawling at meters, rather than kilometers, per hour. Obviously, I was giving complete attention to the road because when I glanced to the side, the Devil had his head twisted towards me, looming in the window. In fact, I’m not sure he even roared at me now that I think about … I need to re-read the stage report because I don’t think he made a sound. 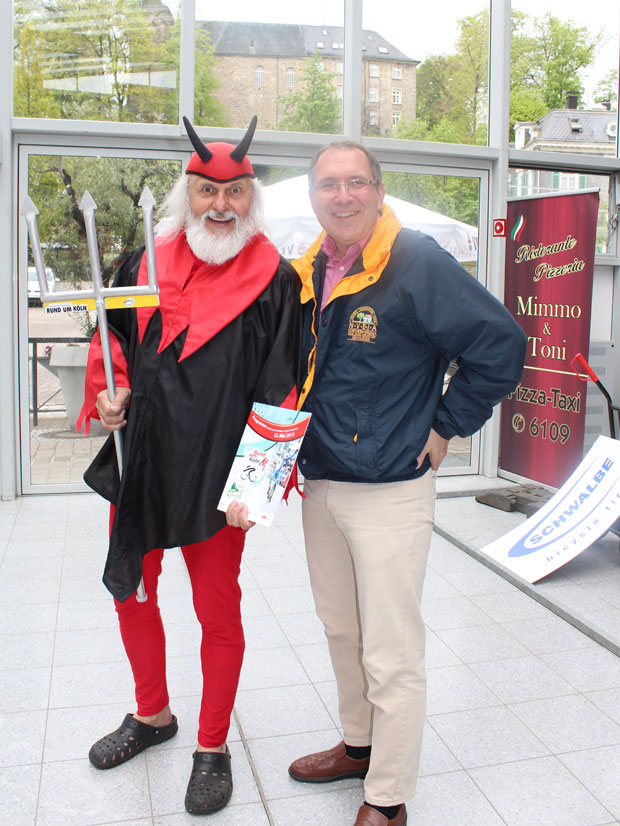 Didi Senft is well-known throughout Germany but I first met him on the lower reaches of the Alpe d’Huez at the 2006 Tour de France, a stage that would be won by Frank Schleck. I chatted with him at Rund um Koln last year, where he was accompanied by his young son who was also dressed in a devil’s costume but I did not have much of a chance to speak with him until we met at the press area of the 2013 Rund um Köln race. It was a cold and rainy day and some of us had taken shelter indoors before the event and he seemed pleased when I asked if we could have a photo taken together. He seemed surprisingly introverted for the Greatest Bike Racing Fan Ever but was pleasant to everyone who spoke to him.
– Leslie Reissner
———– 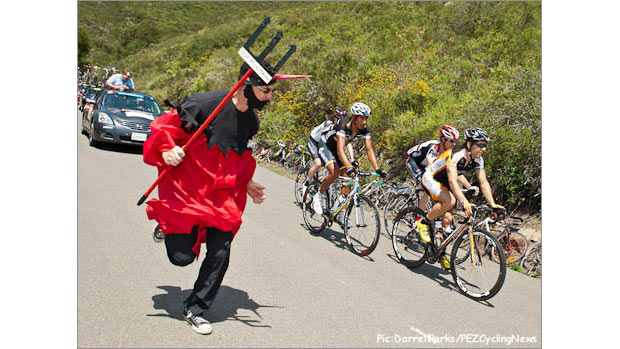 He inspired a raft of cheap imitators, and almost single-handedly created a craze that’s as loved as much as it is hated on the roadsides of pro cycling. 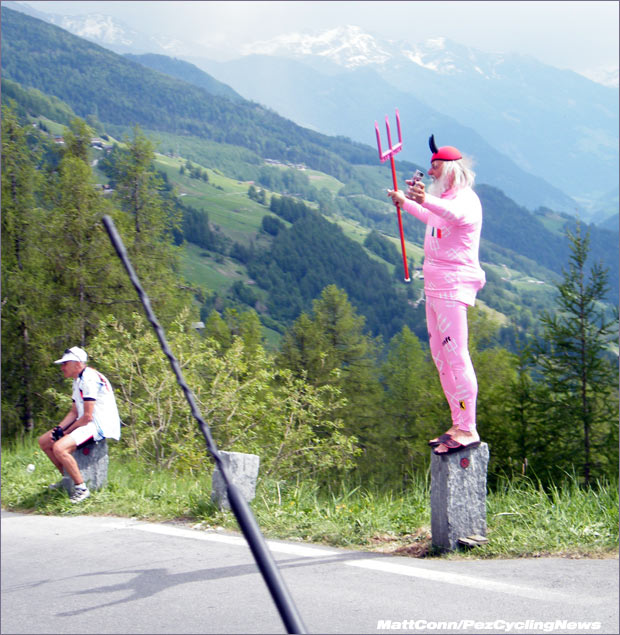 Didi at the 2011 Giro on the Grossglockner in Austria.

Like him or loathe him – and there are plenty of fans and commentators in both camps – Didi Senft’s Devil has been a road side constant for almost as many years as I have been following cycling. For anyone who has seen him roadside, interviewed on TV or stopped to talk to him in person, it can be difficult to tell exactly where Didi stopped and The Devil started. As one of the first and certainly the longest serving road-side oddities in professional cycling, there was never any shortage of people wanting to get photographed with Senft, either for a personal memento or to put in their magazine or help drive traffic to their website.

In the 2009 Giro, on the way to San Martino di Castrozza for the Giro d’Italia’s fourth stage, I had my own opportunity to grab a snap of Didi the Devil. Some credit (or maybe blame?) is due for helping to kick-start the whole fan participation, road-side dress-up craze, we have seen gain momentum over the past 20 years. On the other hand, just because TV directors decided to regularly give him airtime at the races he went to, it is a bit much to hold him directly responsible for the “me generation” of fans with their horned helmets or selfie sticks who think it is more about them getting on TV than the bikes they have supposedly come to see. With his announced retirement, there’s no doubt that someone will be along shortly to try and fill the vacant flip-flops of the man with his own Twitter parody account. Whoever they are, they’ll have a devil of a job if they think they’re ever going to fill his shoes.

He’s posed for what… hundreds of thousands of photos with fans in his career? It’s unlikely he’ll remember us, but like hundreds of thousand of fans, I’ll always remember him. So while the roadside of modern cycling may be crowded with costumed clowns, the presence of the man in red will be missed by many.