Rider Feature: If you have been lucky enough to have been to the ‘6 Days’ of Gent in the last 20 years you will have seen Iljo Keisse, you may even have witnessed one of his seven wins. Last Sunday Keisse bowed out of professional cycling (as a rider) on his home boards. Ed Hood was there to see it and here are his thoughts on the ‘Kuipke Keizer’. 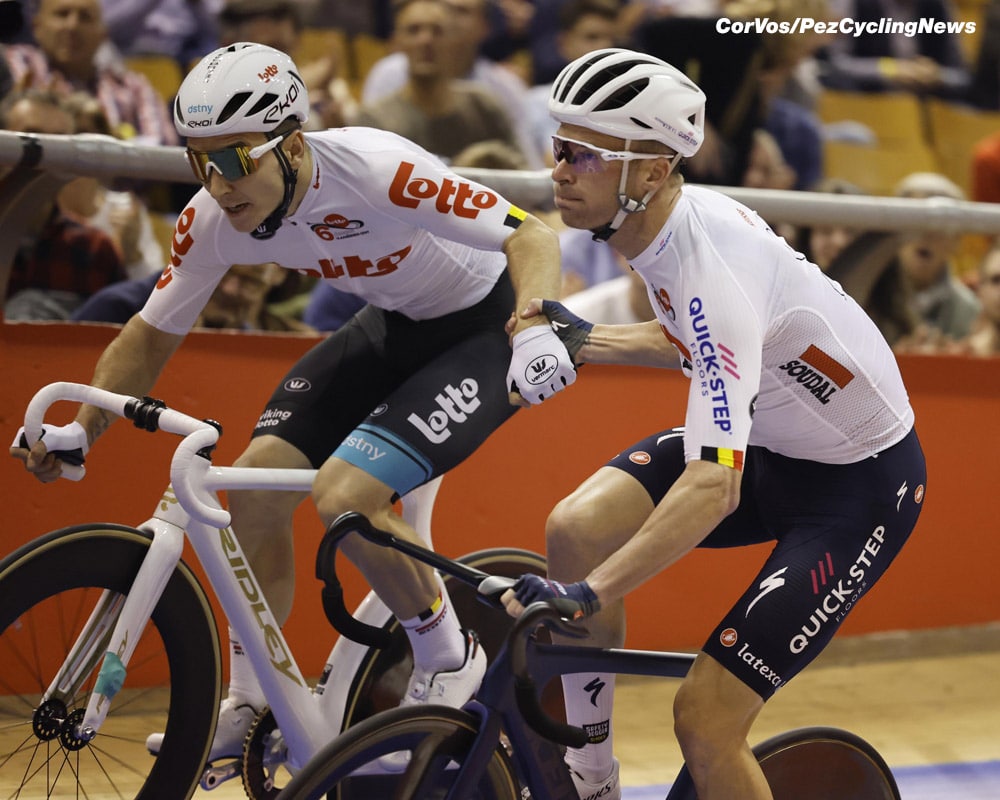 The move was on

Late on the Sunday afternoon Iljo and his strong partner and compatriot, Jasper De Buyst pull off a ‘doublette’ – two lap gains in quick succession – in this 100th edition of the Gent Six Day race. I start to worry that we’re going to get served up a ‘fairy tale.’ But it’s an aberration, I can relax, leaders Rob Ghys & Lindsay De Vylder and their closest challengers Yoeri Havik & Fabian Van Den Bosche restore the status quo as the two strongest teams on the track and ‘Keisse de Kuipke Keizer’ and his solid partner, De Buyst return to third place on the big score board. And that’s how it ends. 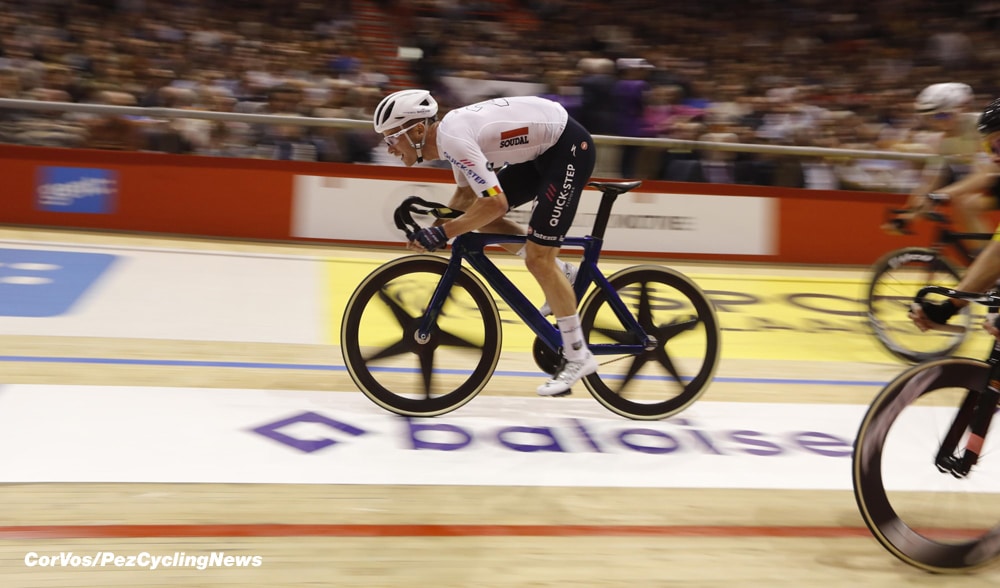 Two laps were taken back

It’s a fair and honest result and only the most feral Iljo-ista would have expected him to win at 39 years-of-age, two decades after his first ride on this hallowed hardwood in the Gent six day – and against much younger and fresher opposition. 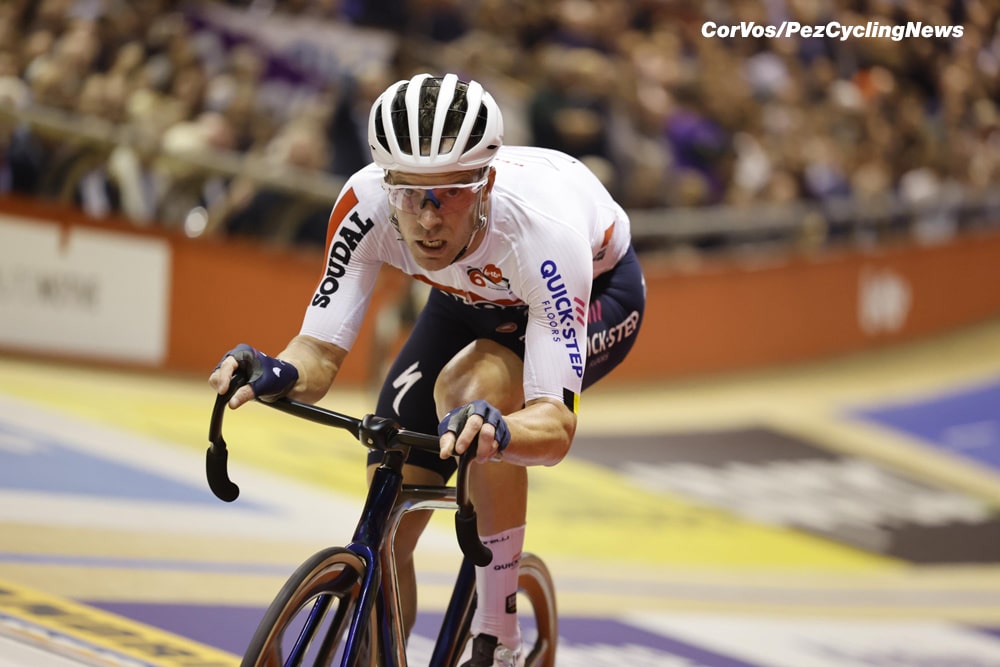 Could there be a fairy tale ending?

It was Keisse’s destiny to become a track man, father Ronie was once manager of the Kuipke velodrome. Ronie now owns the famous De Karper bar in Gent just minutes from the Kuipke, I interviewed him a few years ago and asked him;

‘When did you first think that Iljo would be a racing cyclist?’
“When I had a hamburger van, which I took to sporting events, he would come with me and see the different sports – he played soccer and squash. But it wasn’t until I took the job at the velodrome that he got into cycling – no nerves, no fear, soaring on those boards at seven years-of-age.” 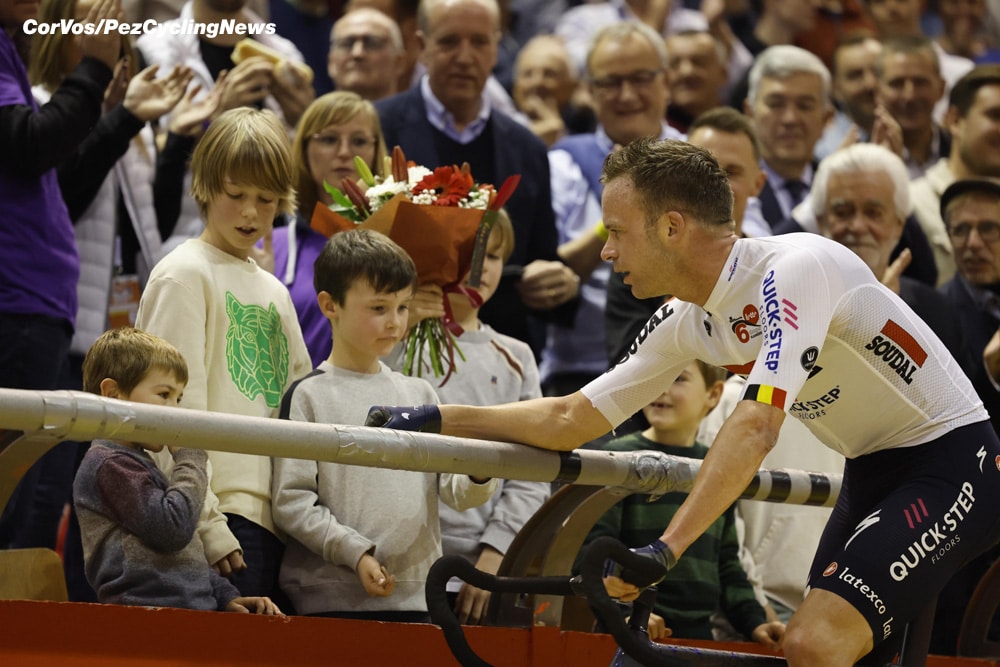 Iljo was 7 when he first hit the boards

That seven years-old went on to have an exceptional record over the last 20 years of the Gent Six Day Race:

2002: 13e with Jean-Pierre Van Zyl, the South African who held the Gent track record for many years.

2003: 9e with Austria’s Franz Stocher, who was Worlds Points Race Champion that year.

2004: 2e with German, Andreas Beikirch who won the six days of Bremen, Dortmund and Stuttgart as well as the European Madison Championships.

2006: the race was stopped after the tragic death in a crash of Spaniard, Isaac Gálvez with Keisse/Bartko leading the standings.

2007: win number two with, German ‘Terminator,’ ‘Big Bob’ Bartko who was Olympic Individual and Team Pursuit Champion in 2000 in Sydney and won 21 six days off 79 starts.

2013: 2e with Dutch six day stalwart, Wim Stroetinga who was a National, European and World Champion as a junior and was European Omnium Champion at elite level. 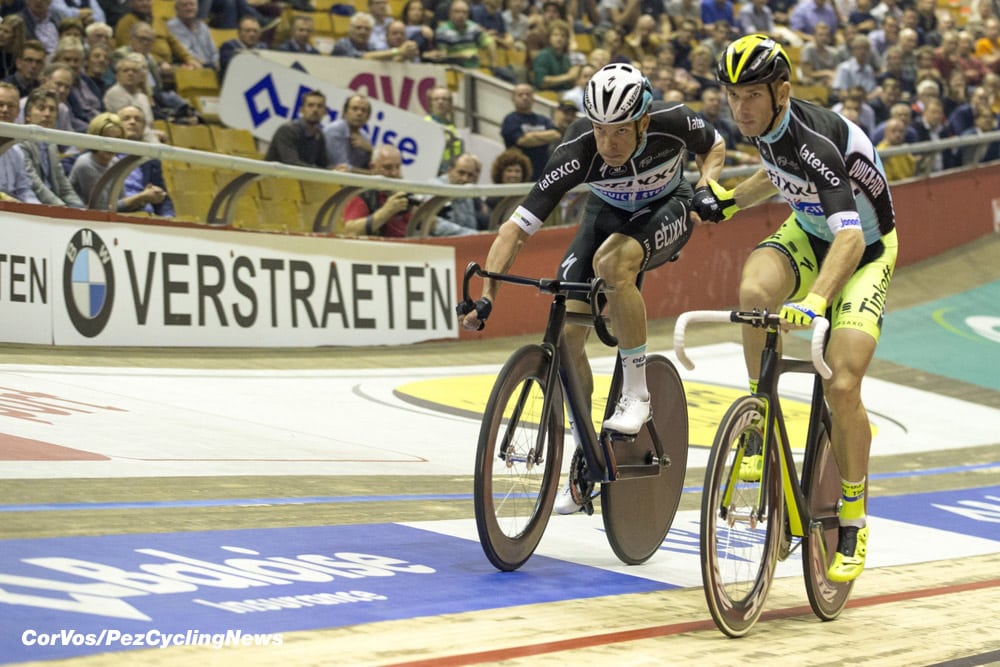 Win No.6 with Michael Mørkøv

2015: win number six, with Danish Olympic Madison Champion, Michael Mørkøv and along with Keisse, Kluge and Havik one of the few ‘specialist’ six day men left. 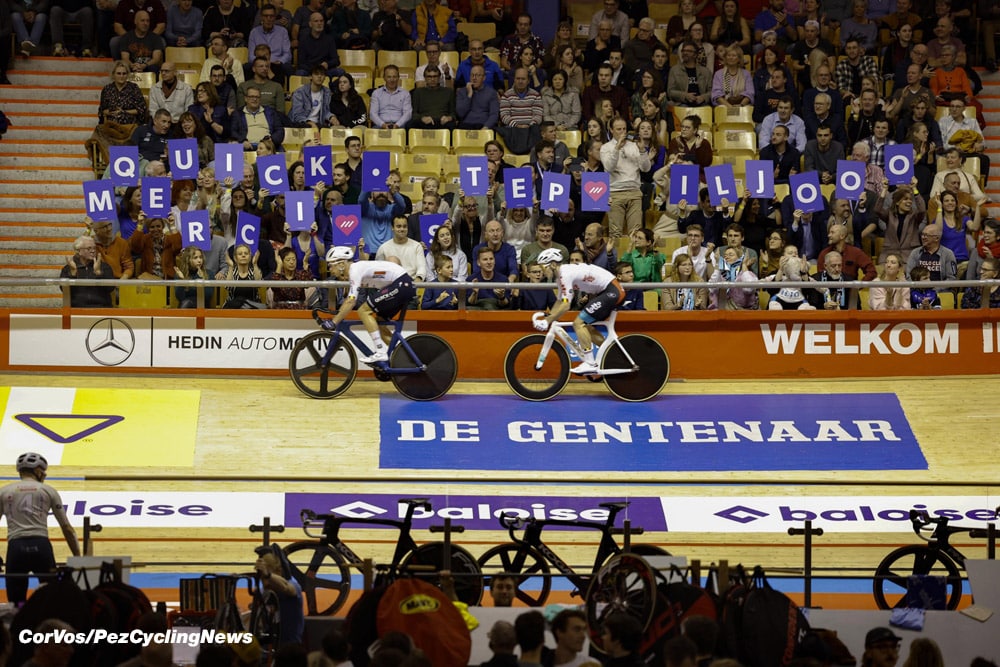 Everyone was a Iljo fan on Sunday

Those seven wins put him level with Danny Clark of Australia in terms of wins in Gent but behind the late Patrick Sercu who won 11 times and Etienne De Wilde who won nine. Keisse’s overall six day stats are impressive; 28 wins off 87 starts with 16 different partners, his strongest pairings being seven wins with Robert Bartko and four each with Matt Gilmore and Niki Terpstra. 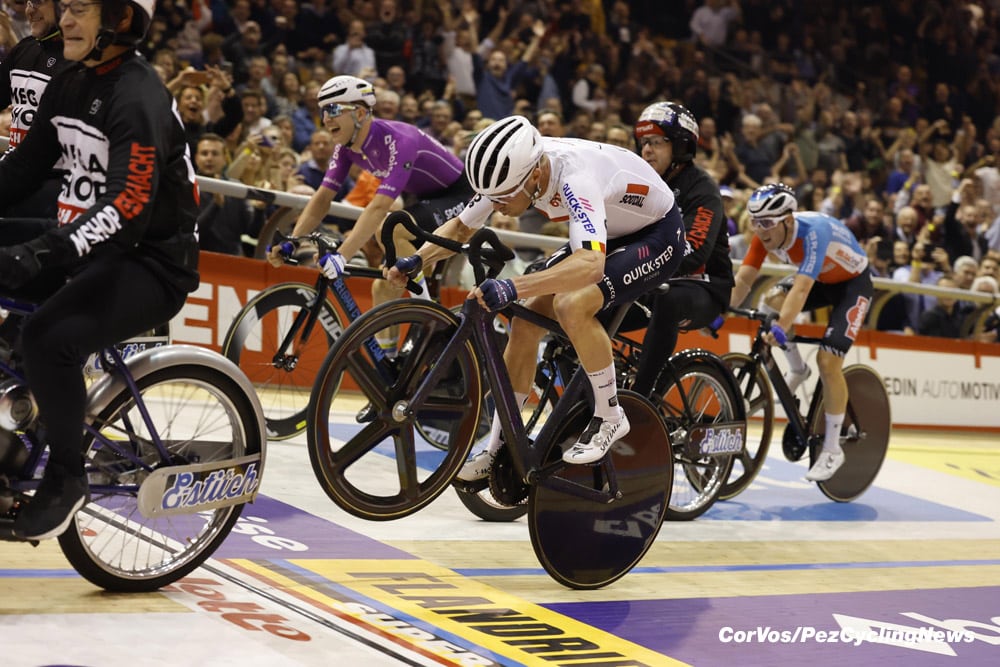 Keisse was jumping behind his derny

He won in Amsterdam, Bremen, Copenhagen, Fiorenzuola, Gent, Grenoble, Hasselt, Munich, Rotterdam, Stuttgart and Zurich. On the championship stage he won multiple national titles across disciplines as diverse as scratch, kilometre madison, Derny, points and pursuit as a junior and elite rider. At European level he’s been Madison and Derny Champion. 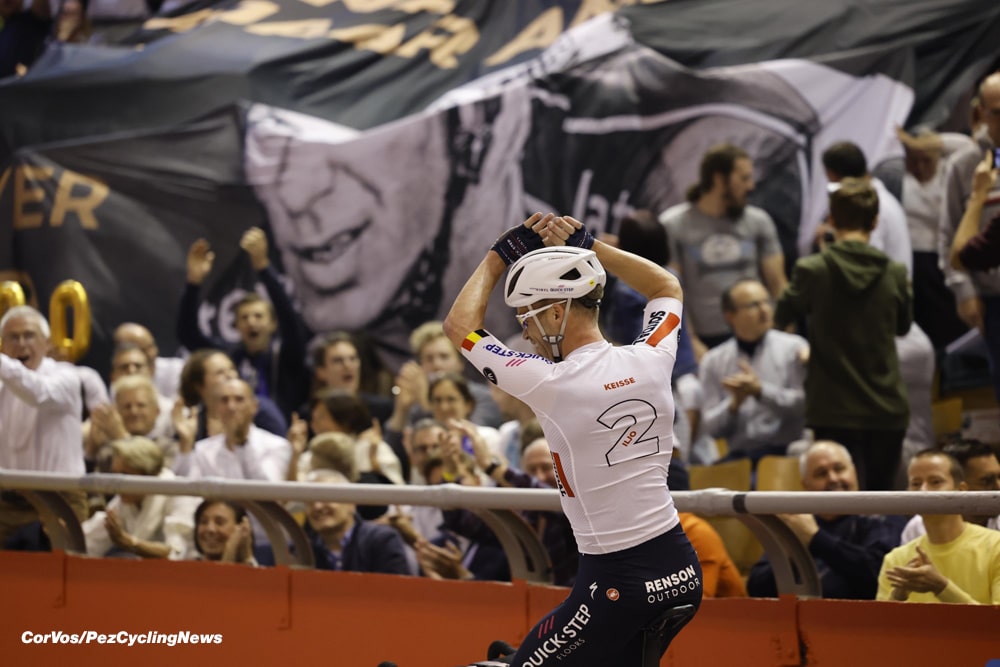 The coveted World Madison eluded him but there was always the conflict with his road program as an issue. However, there was Worlds silver to Spanish Legend, Juan Llaneras in the 2007 Worlds Points Championship. But Patrick Lefevere didn’t pay him to ride round in circles, his role was that of a team player who should give his all in the first 100 kilometres of those tough, cobbled Belgian races.

That said, he had his moments on the road; possibly one of the most exciting finishes to a race I’ve ever seen came in the 2012 Tour of Turkey when a solo Iljo, with a screaming peloton just seconds behind him, crashed on a bend made dangerous by melted tar inside the last kilometre, getting back up to win the stage as the sprinters hurtled past him just moments after he crossed the line.

Then there was the final stage of Giro in 2015 when a ‘suicide’ break of Keisse and big Aussie Luke ‘Turbo’ Durbridge held of the peloton with Keisse way too quick and clever for the Aussie at the death. There was a podium too in Kuurne-Brussels-Kuurne in 2007 and wins in races like the Textielprijs, Vichte and GP Lucien Van Impe. 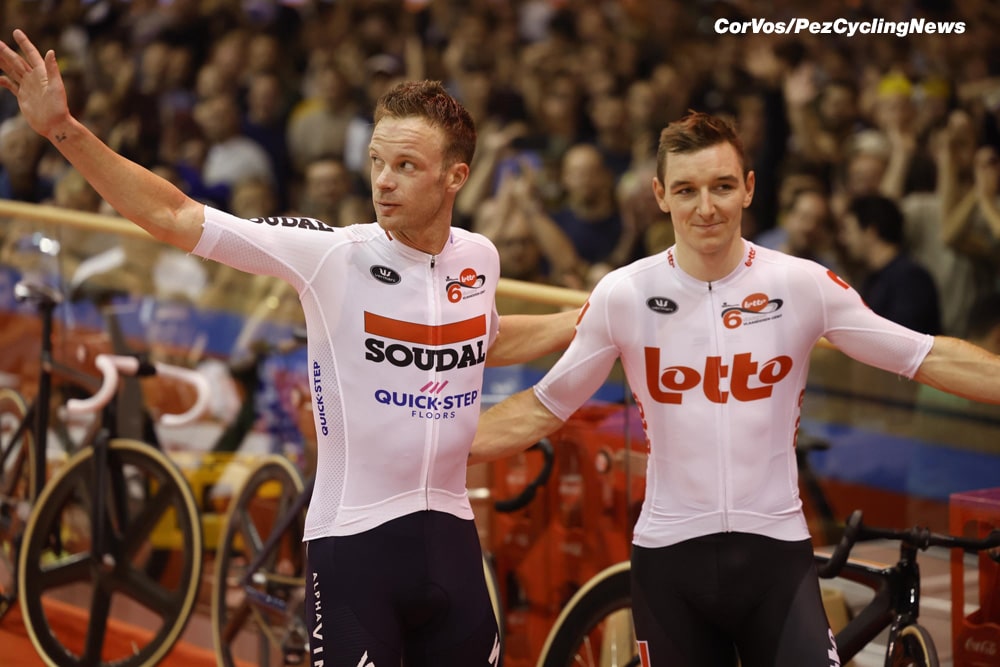 No win for De Buyst and Keisse

However, his career was not without controversy; whilst the Belgian Federation refused to recognise a suspension for a failed dope test, accepting the Belgian’s explanation that it was a contaminated food supplement the UCi were less understanding, banning him from UCi races. But it’s hard to keep a good man down and Keisse launched himself into a campaign of non-UCi, Belgian kermises to keep his fitness, winning some 11 races for John Saey-Deschacht-Hyundai. The complex affair rumbled on through all manner of appeals and hearings before Keisse could get back to competing at the top level. The last we heard, the legal wrangling was still not concluded. 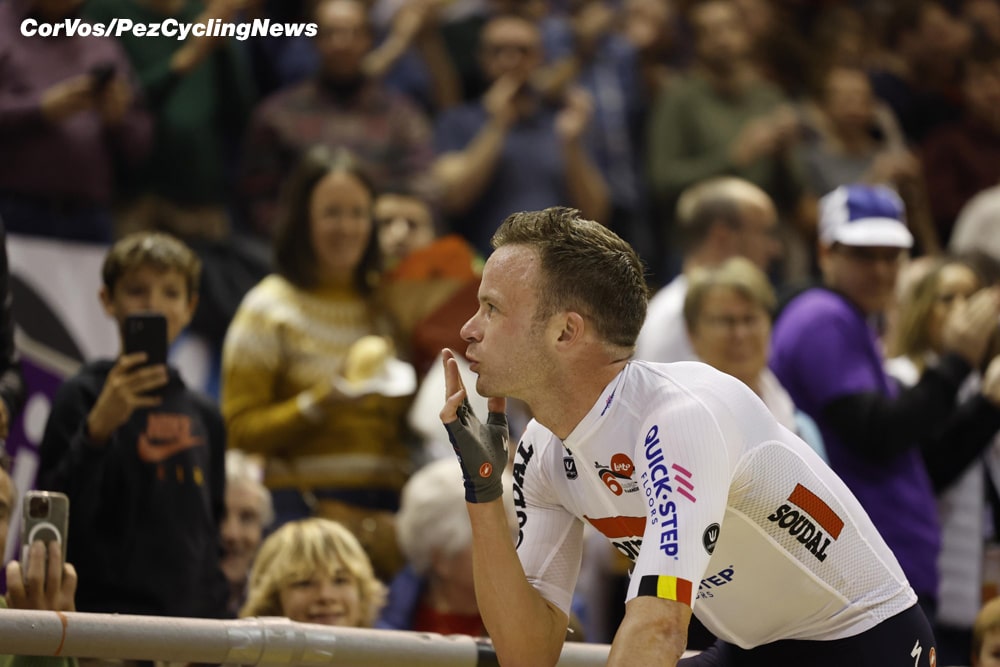 But when the Gentenaar emerged from his nightmare and could race again at the highest levels, he signed for Patrick Lefevere’s Quick-Step team for 2010 and has been there for 12 years; after his formative years were spent in the Chocolade Jacques team, the forerunner of the current Sport Vlaanderen team. And whilst he may now be retired as a rider his career continues with Quick-Step as a DS in the team car. However, the Kuipke just won’t be the same without Iljooo. . . 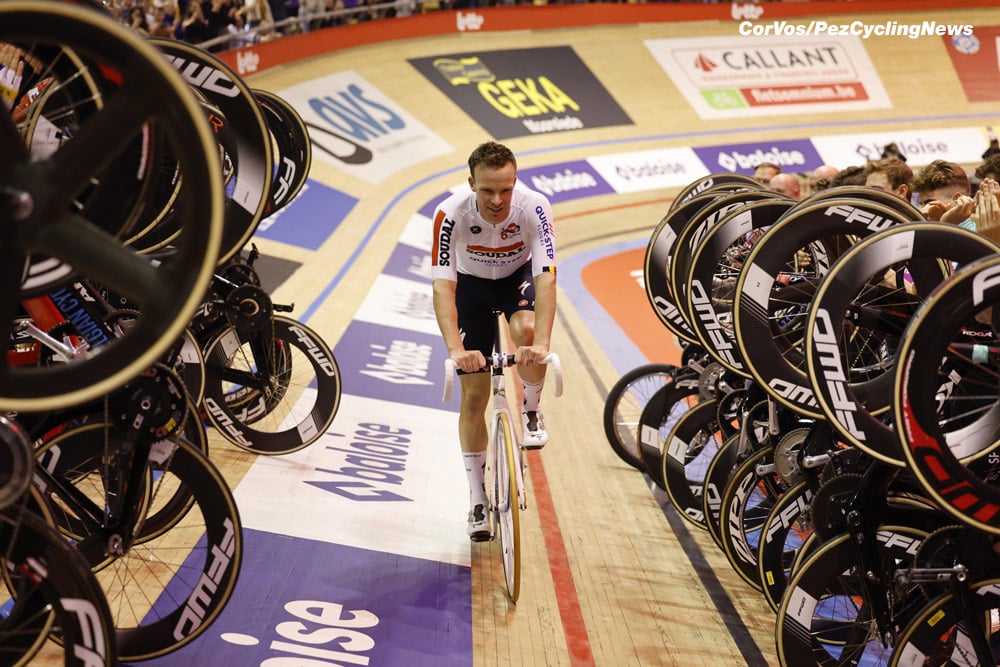 # Best of luck from PEZ to Iljo for his future. #

EUROTRASH Thursday: Evenepoel, Pogačar, Pidcock and all the News from the Cycling World