“Life is like riding a bicycle,” physicist Albert Einstein once wrote to his son Eduard. “To keep your balance, you must keep moving.”

Taking to the cinder track of Bill Armstrong Stadium on the Indiana University-Bloomington campus this weekend will be 33 men’s and 32 women’s teams of four on their single-speed track bikes for the 66th and 29th running of Little 500, respectively.

Dubbed the “World’s Greatest College Weekend”, Little 500 is the largest collegiate intramural cycling event in the United States, amassing a historical who’s who of riders whose exceptional palmares have included the Olympics and Pan-Am Games as well as National and World Championship titles across multiple disciplines. Little 500 has left an indelible mark on the men and women who have competed in these past 15,800 collective laps. Riders obsessively train for these two days in April as fans anxiously await the sound of the starter pistol and the hope of the brilliant sunshine breaking through the clouds. Beyond the generic anticipation of a sporting event, Little 500 and the experience of tens of thousands of fans yelling themselves hoarse inside that IU stadium is a cherished moment of nostalgia for its riders, fans and IU alumni around the world. 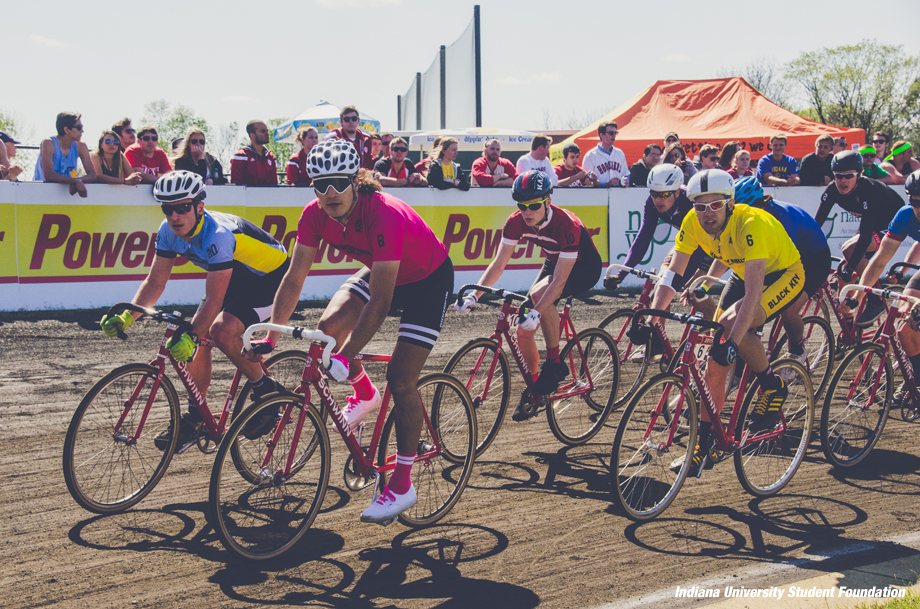 “I met my wife at IU,” said Wayne Stetina, who pledged to fraternity Delta Chi, the second winngingest Little 500 team, and contributed to the team’s Little 500 victories in 1973 and 1974.

After returning from the 1972 Olympics in Munich, Stetina started at IU a few weeks late, and soon met his wife Barbara of the Alpha Gamma Delta sorority, who decided to go out with Stetina after she was unsuccessful in setting him up with another. Needless to say, a ceremony rivaling all others soon followed, and the rest goes down as an IU Little 500 memory. 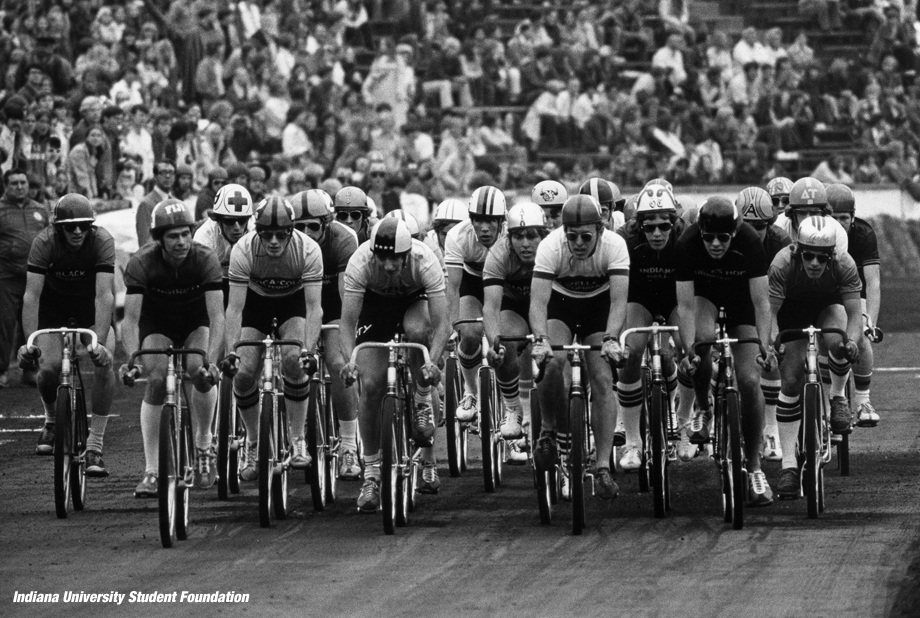 Inducted into the U.S. Cycling Hall of Fame in 1999, Olympic Cyclist Stetina hails from a highly decorated cycling family and holds a great number of National, Elite and Masters titles. Stetina still holds the Little 500 record for most laps completed by a single cyclist, having completed 144 of 200 laps in 1973.

“There was actually a big crash that year, and I flipped but landed on my feet”, recalled Stetina. “I had to come in to change my bike and was within 10 yards of going down a lap. I was a rookie but I understood strong racing tactics. And it helps to have 25,000 screaming students and fans watching a bike race in a stadium.”

While many Little 500 riders approach the highly respected competition with limited experience on the bike, Stetina’s seasoned perspective was different but the emotional branding cast him onto a similar sentimental journey echoed by Little 500 competitors. 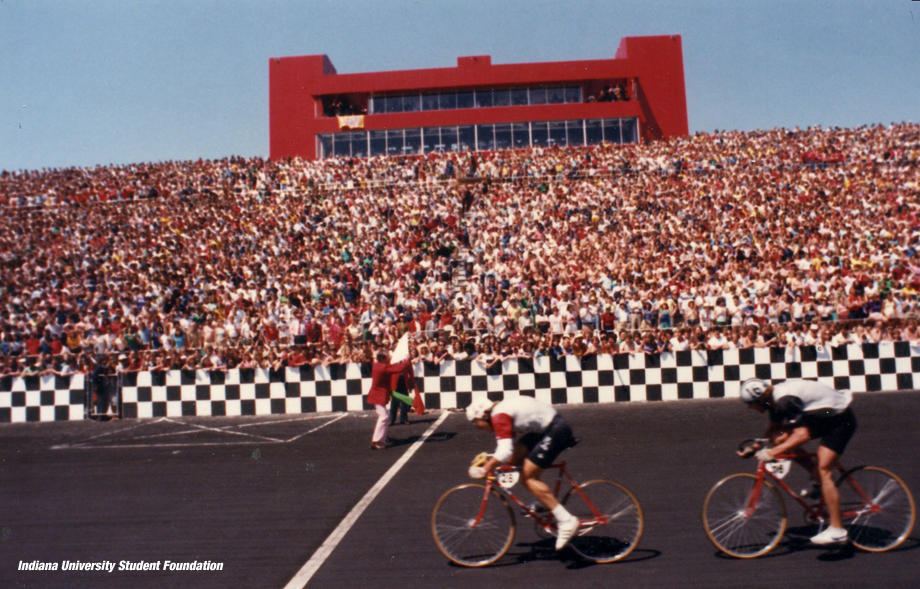 “I have so many good memories of Little 500 and IU,” said Stetina. “You cannot overstate the power of the event. It was fascinating for me to learn about all the inner workings and how much there was going on behind the scenes.”

Having raced for 50 years, Stetina retired a few years ago after shattering a hip but is still logging 14,000 miles per year at age 62. Forever embedded in the cycling culture with head and heart, Stetina is Vice President and Road Product Specialist at Shimano, where he has called home since his 31st birthday. Stetina offered that just like competing in bike racing, he has fun competing in business.

“New groups and new benchmarks, with every little detail being optimized. There are more ways to lose a bike race than win it. Everything has to come together…you’ve gotta be fit but not over-train,” said Stetina. “If you have good legs, you have options but while you may look brilliant, in time that will back fire. The physical piece is just one part of it. That’s what I love about bike racing.”

Stetina said Little 500 riders today race on a much faster surface, unlike when he competed on the old football stadium in the Seventies, which made pedaling through sharp turns impossible. Aside from that, the strategy of the race hasn’t changed.

“No one ever wins a bike race in the first lap. It’s most important not to crash. And don’t elbow when it’s not critical,” said Stetina. It’s a bike race so all your plans aren’t going to work out because races never end up as you expect they will. Be flexible in tactics and be responsive. And if you crash, be patient.” 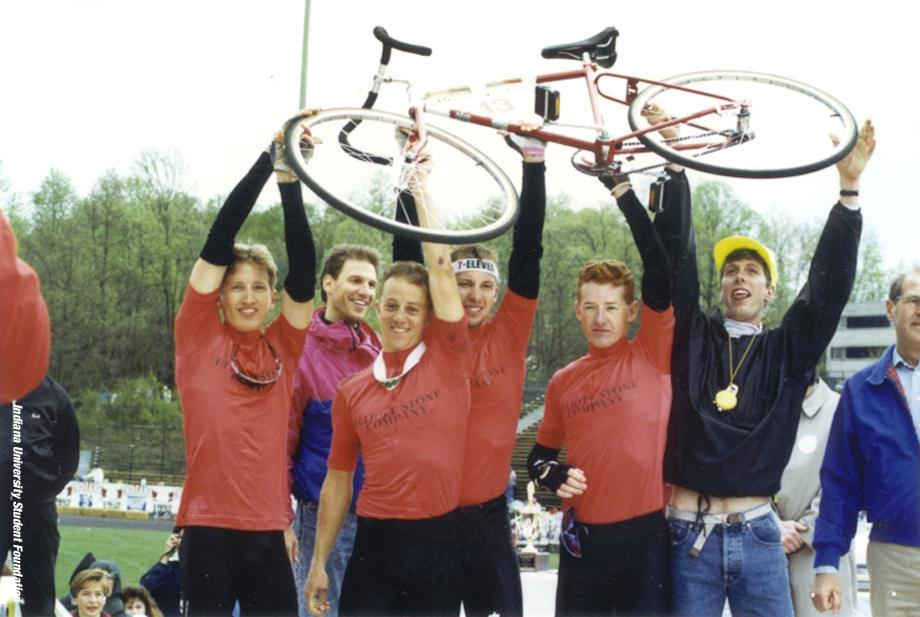 A life lesson.
Beyond the premise surrounding the character of real-life Little 500 rider Dave Blasé in the 1979 movie “Breaking Away”, countless stories are just beginning to get written on those cinders and in those stands. Thousands of lifetime memories and friendships have been made around that Little 500 track. 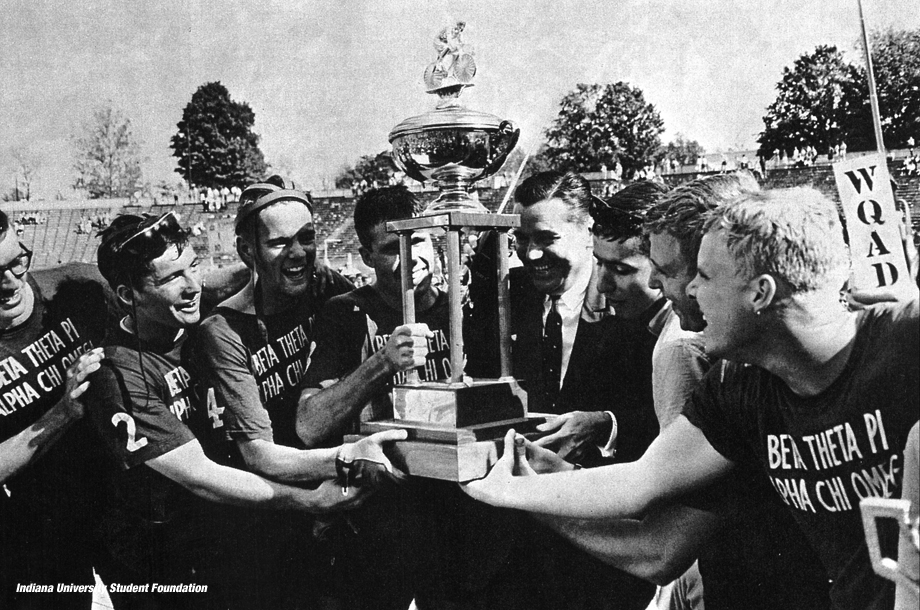 Logan said even though the fraternity during those years didn’t place so well, he has retained several great friendships from those formed during Little 500. He said he met Blasé during Little 500 but grew closer after college, and they get together every so often to this day. After his days at IU, Logan went on to top the podium in countless races but managed to make time to become a junior high school teacher and bike shop owner. He still competes and coaches athletes around the country but he said that cycling and his time racing Little 500 has played a huge role in his life.

“There are so many ups and downs in cycling…the same goes for life in general,” said Logan. “What you learn in cycling helps you deal with coming back from real circumstances that you’re not expecting. You’ve got to keep fighting. Keep digging.”

The Little 500 was patterned after the Indy 500. As that Memorial Day tradition celebrates its 100th in Indianapolis this year, it’s clear that Little 500 will go on to grow its tradition as its riders will continue to leave tremendous legacies in their tire trails. Since 1951, more than $2 million has been raised for the IU Student Foundation scholarship program through the annual Little 500 event. 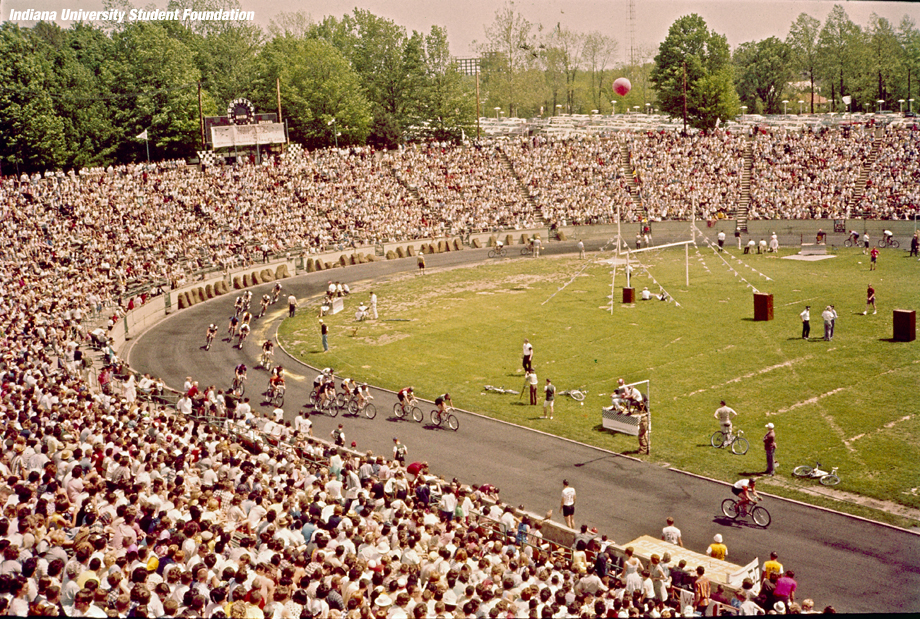 Whether a Little 500 rider or fan, Pro or recreational cyclist, man or woman, entry-level Junior or experienced Master, cycling infects our souls in the most wonderful ways. Our stories are our own but in sharing them we motivate others who in turn pay it forward. Similar to these Little 500 riders who go on to race at the Elite level or never race again but ride into their offices each morning and driveway each night, we can all contribute to society using our energy we derive from cycling.

“I’m on a mission to pretend I’m not getting older so we’ll see how that goes,” concluded Stetina.

So it goes back to Einstein: “Life is like riding a bicycle. To keep your balance, you must keep moving.” To keep moving it seems, you must also find that balance.

Get energized, and fall in love with your sport all over again. Watch the exclusive Little 500 live stream broadcasts of the Women’s and Men’s races this Friday and Saturday at 4:00 p.m. EST and 2:00 p.m., respectively: https://www.iusf.indiana.edu/little500/fans/ 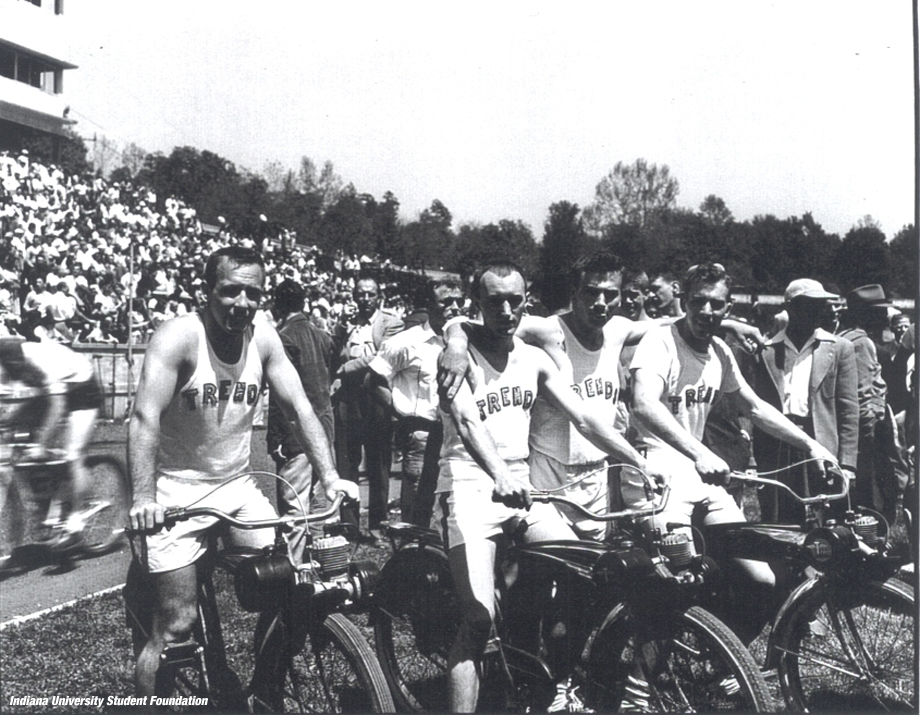