The Making Of The 2013 Darrell Parks Calendar

Now that we’re into the holiday season, what better way to get the cycling fan on your Holiday list something for the New Year than with PEZ Photographer Darrell Parks’ 2013 calendar? This year’s calendar features images from the beauty of California with scenes from the AMGEN Tour while the rugged landscapes of Colorado are captured from the USAPC. Images from The Tour of the Battenkill and The Air Force Cycling Classic are in there too. Follow along as Darrell takes us through the stories behind a few of his selections…

Firstly – you can order your “Darrell Parks 2013 Cycling Calendar” here.

There’s something compelling about bikes and bridges. We love to see that special shot of the peloton stretched out high above the water below, isolated on a narrow strip of concrete. This year’s cover shot captures that view as the peloton crosses the bridge over the Blue Mesa Reservoir on Stage 2 of the 2012 USA Pro Challenge. This is one of my favorite captures from the 2012 racing season and was a lock for the cover image. 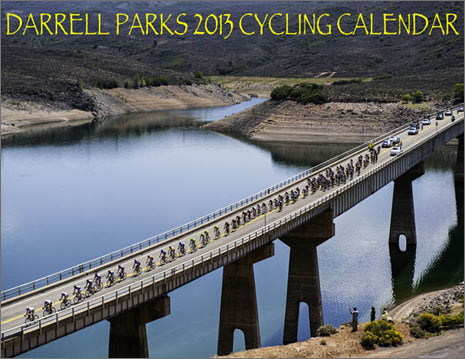 Imagine my surprise when USA Cyclocross Champion Jeremy Powers showed up at our local season opener cross race. He was in town for one of his excellent cross training camps and decided to race Tacchino cross as his first race of the 2012 season. I really liked the back lighting that was filtering through the trees at the top of a short climb and new it was the perfect condition for the “Star Wars” hyper space effect I was after. I used the other racers at the back of the pack to dial in my camera settings until I had the exact exposure I wanted. Then all I had to do was wait for the front of the race to come by and make the capture 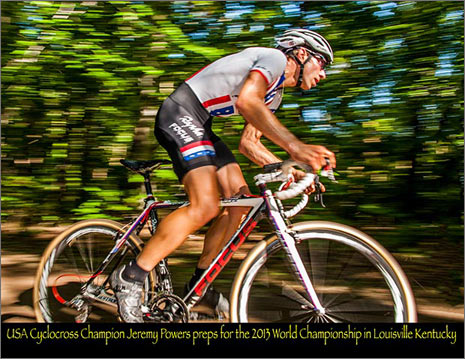 The Colorado landscape is nothing short of spectacular. It’s therefore no surprise that the majority of my calendar images are from the USA Pro Challenge. It’s always difficult narrowing it down to just five or six images, but this one of Team BMC shepherding Tejay Van Garderen, with the peloton and race caravan strung out as far as the eye can see, easily made the cut. 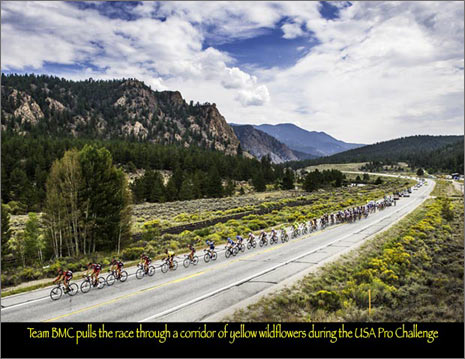 Another USA Pro Challenge favorite is Taylor Phinney Leading the Peloton across the gravel on stage three as they start the climb to Cottonwood pass and eventually on to Independence pass, both topping out at over 12,000 feet of elevation! At 130 miles long with dirt roads and two high mountain passes this was surely an epic stage. Road bikes and dirt roads provide a thrilling contrast and seal in the fact that these cyclists are amazing athletes able to endure much pain and suffering. 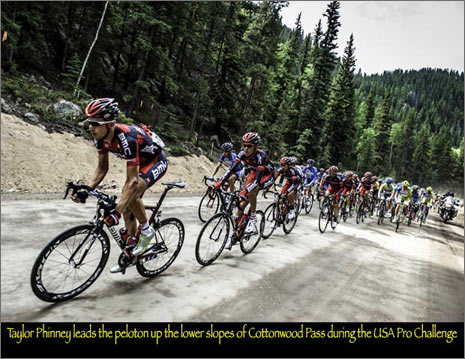 Speaking of dirt roads, how about racing your road bike on passages containing rocks the size of your fist? That’s what you can expect to encounter at the one day classic “Tour of the Battenkill” in New York State. This year conditions were particularly dry and dusty making it difficult to even see the rider in front of you while engulfing your face in grit and grime. Its relatively long distance, combined with multiple sections of dirt roads, makes for a tuff day of racing. The amateur races, held on the same course the day before the pros, had more than 2000 participants! 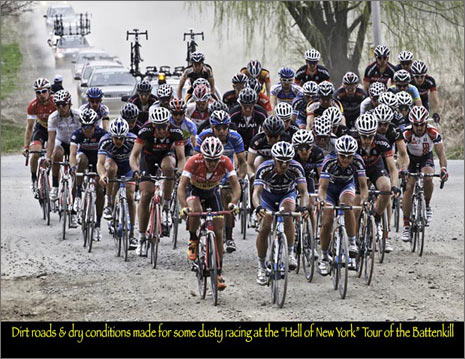 The AMGEN Tour of California has become a classic American stage race as well as garnering worldwide acclaim. I featured a young Peter Sagan in my calendar a couple of years back. I referred to him as the future of our sport when he took the Stage into Big Bear Lake going against a group of seasoned pros. Flash forward to 2012 where he won a total of five stages in the seven stage California race! Then he followed that up with 3 stage wins in the Tour de France. The future of our sport indeed! 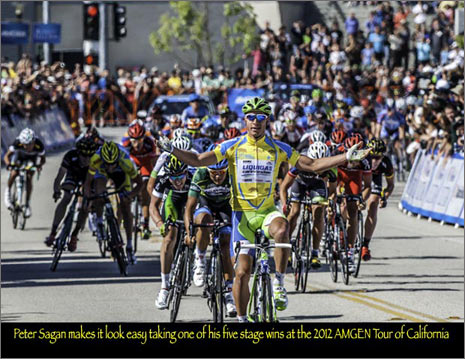 Boulder Colorado is a known Mecca of cycling and the penultimate stage of the USA Pro Challenge from Golden to Boulder confirmed that fact. After the start in Golden most fans headed up Flagstaff Mountain to stake their claim on a spot where they could watch the race finish. This left the early climb up Boulder Canyon relatively fan free. 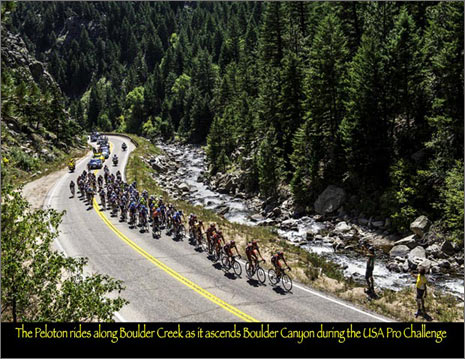 Capturing this shot of the peloton riding along Boulder Creek required me to go into mountaineer mode. The best angle for most scenic shots demands some height and usually higher you can get the better. Here’s a picture of where I took this photo from. 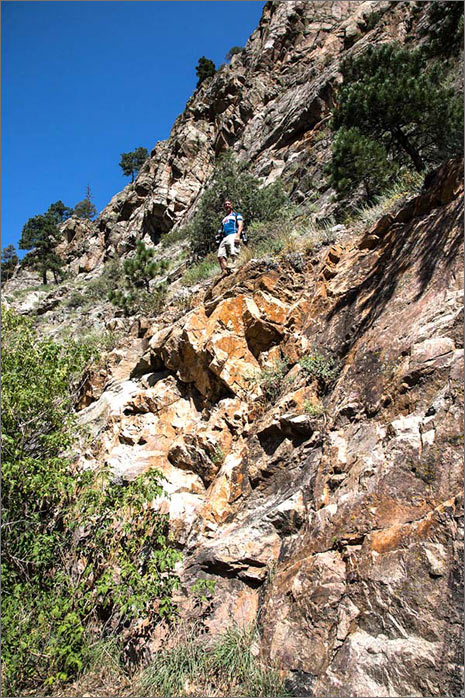 Stage 5 of the USA Pro Challenge passed through the scenic “Garden of the Gods” park just before finishing in downtown Colorado Springs. This was the site of the inaugural year’s opening Time Trial and made for some great TT shots. 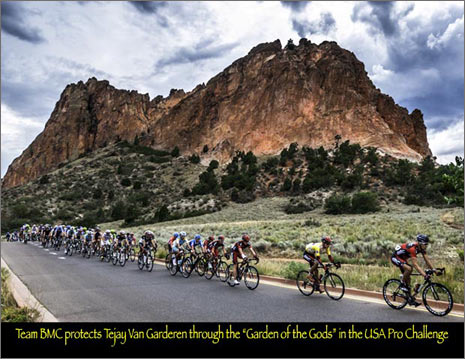 This shot was captured with my remote camera setup while I was shooting the following vertical format shot from straight on. You can see my tripod setup on the lower left side of the following image. Since I wasn’t on a moto for this stage I used the remote to provide two different perspectives from one location. You’d be hard pressed to find a more dramatic backdrop than these monstrous red rock formations. The ominous cloudy sky adds the perfect contrast to make this one pop. 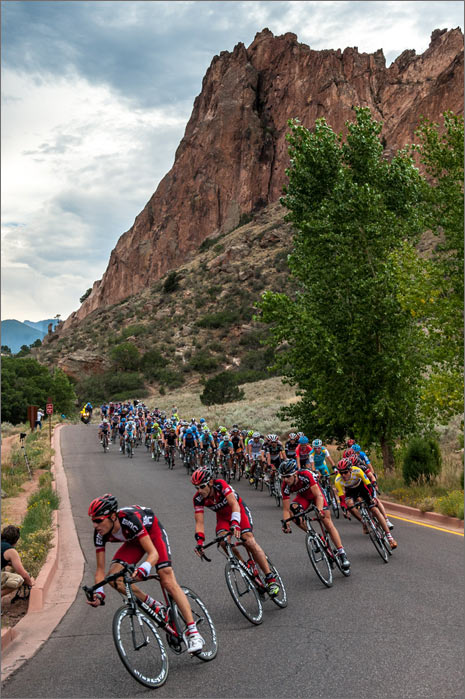 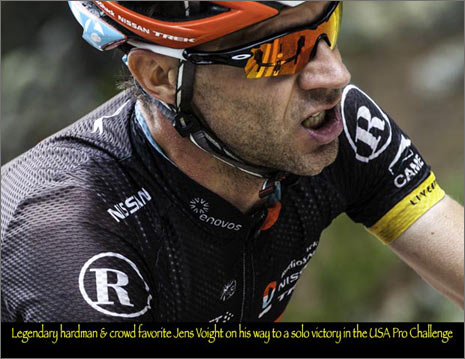 Crowd Favorite and genuine cycling hardman Jens Voigt surprised everyone on stage 4 of the USA Pro Challenge with a long solo breakaway which included the race’s second trip over Independence pass at over 12,000 feet! I was fortunate to be on the photo motorcycle for this epic solo ride. This allowed me to get up close and personal with the tenacious German as he fought deep to stay in front of the chasing peloton.

The calendars parting shot depicts the contrast between California’s arid interior landscape and the vibrant colorful wildflowers that seem to pop up where you least expect them. Happy Holidays to all the PEZ fans! 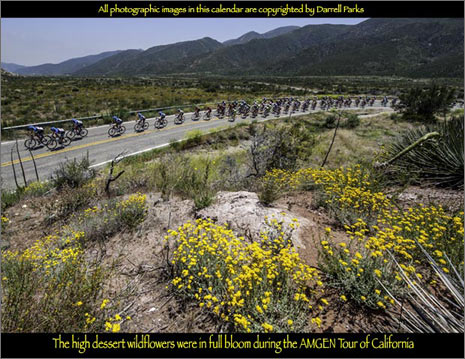 This is a preview of just 10 of the 16 images in this year’s Calendar. To see all the images and to order your “Darrell Parks 2013 Cycling Calendar” please visit www.darrellparks.com/Calendar.html

More fun calendar facts:
• 11” by 17” of pure cycling photography goodness
• 16 full color 8” by 11” cycling images
• Calendar days are annotated with UCI and NRC race dates as well, so you can keep up with what’s going on in 2013.
• The calendar comes in at just $19.95 plus Shipping & Handling charges.
• Fast USPS Priority mail shipping
• Buy one for the cycling fan on your Holiday list…and get one for yourself too!

For more information on ordering and how to get your own, head on over to Darrell’s website, www.DARRELLPARKS.com