Rider Feature: One of the fastest men on the boards over one kilometre in the 80s was Australia’s Martin Vinnicombe. Gold medals in the World championships and Commonwealth Games and silver at the Olympics and a handful more medals at the Worlds. Ed Hood tells the Vinnicombe story. 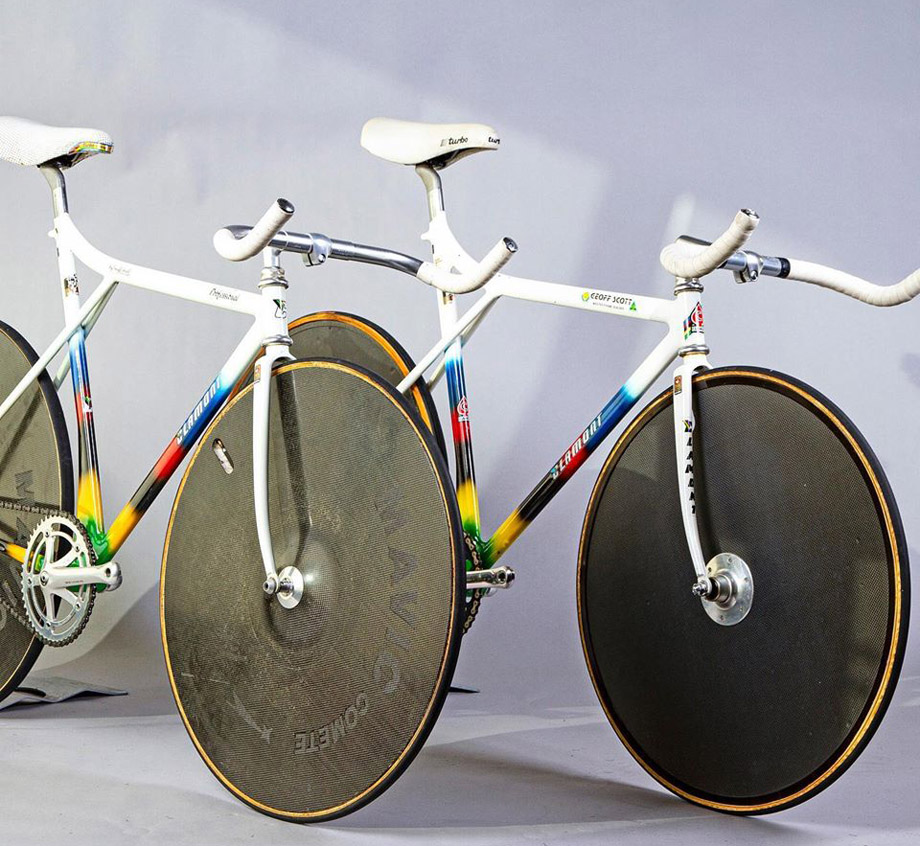 We recently ran a feature on the beautiful bikes built by Aussie artisan Geoff Scott; one of the steeds he built was for a young man called Martin Vinnicombe, an unusual, old English name dating back to the Norman Conquest, one thousand years ago. The Australian was destined to become, along with the late Lothar Thoms of East Germany, one of the greatest kilometre riders the world has ever seen. 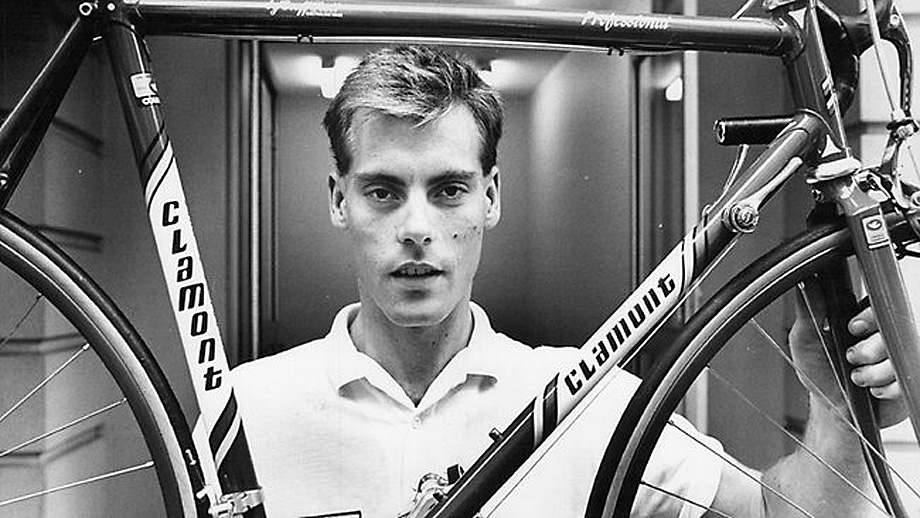 A young Vinnicombe with a Clamont road bike

Vinnicombe was a very brash, confident kid – a typical kilometre rider aficionados might say – just 20 years-old when the ‘big rides’ began, he’d come from a difficult back ground, his mother was an alcoholic and as a result he was tee total. 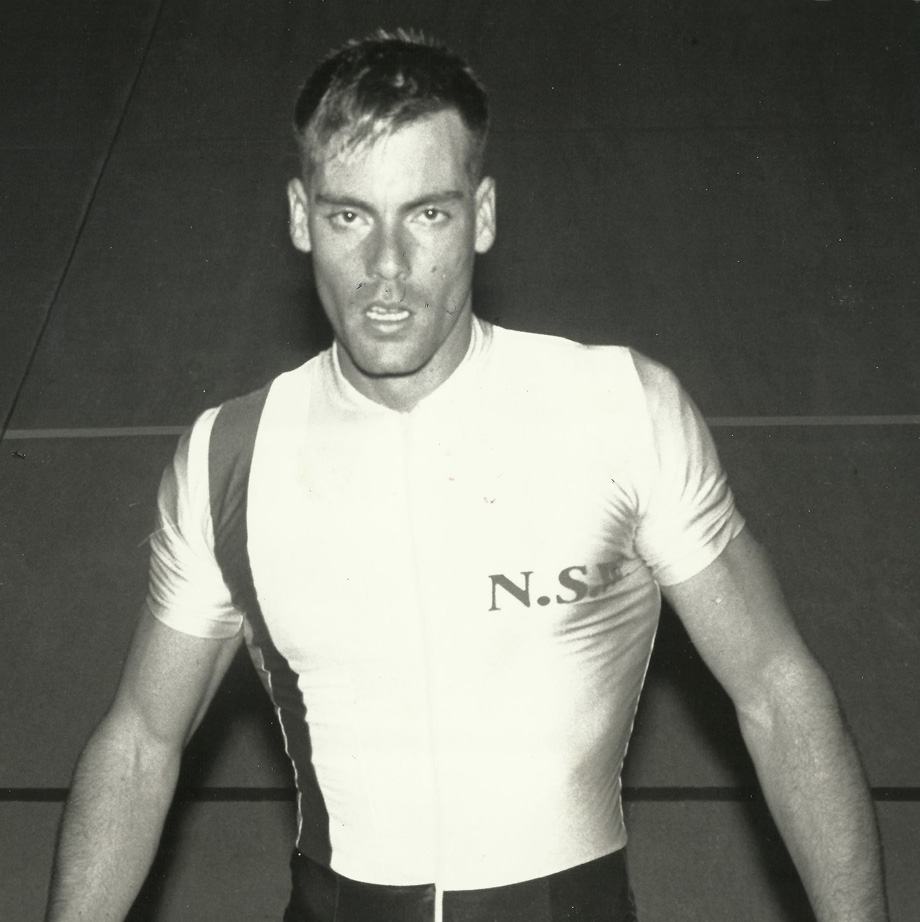 He got into cycling when as a 15 year-old, his cousin Steve Bannon came down to live with the Vinnicombe family after his own home in Darwin, Northern Australia was destroyed by a cyclone. Bannon introduced him to the sport and young Martin’s talent soon became obvious. Vinnicombe had originally been a 4,000 metres pursuit rider, taking a bronze medal in the Australian Championship in 1984. The following season however his focus changed and he became what he’s best known for a, ‘Kilo Man’ focusing solely on the 1,000 metre time trial. It’s a savage event, one which my compatriot Chris Hoy would later make his own; back then there were no heats, repechages or margins for error – one ride, one chance with the winner taking all. 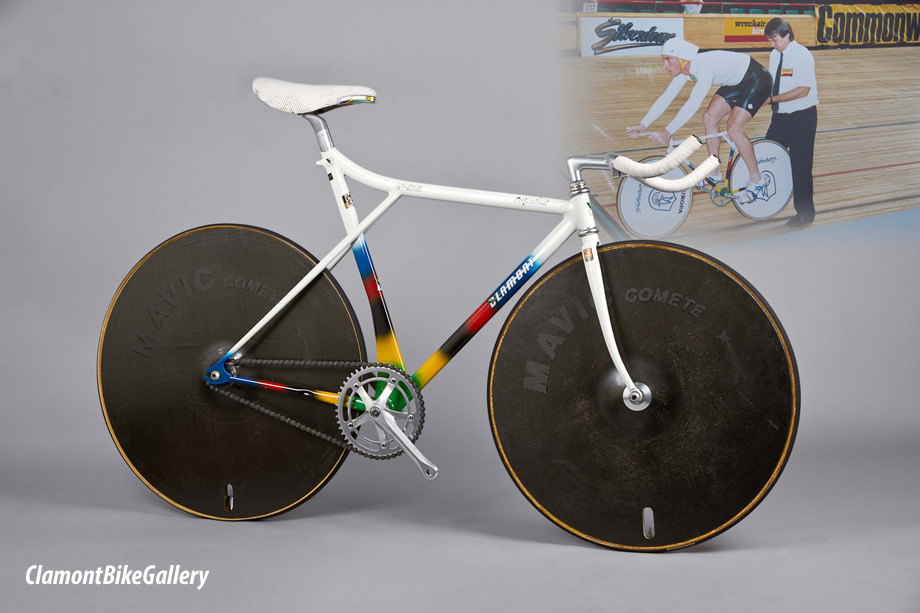 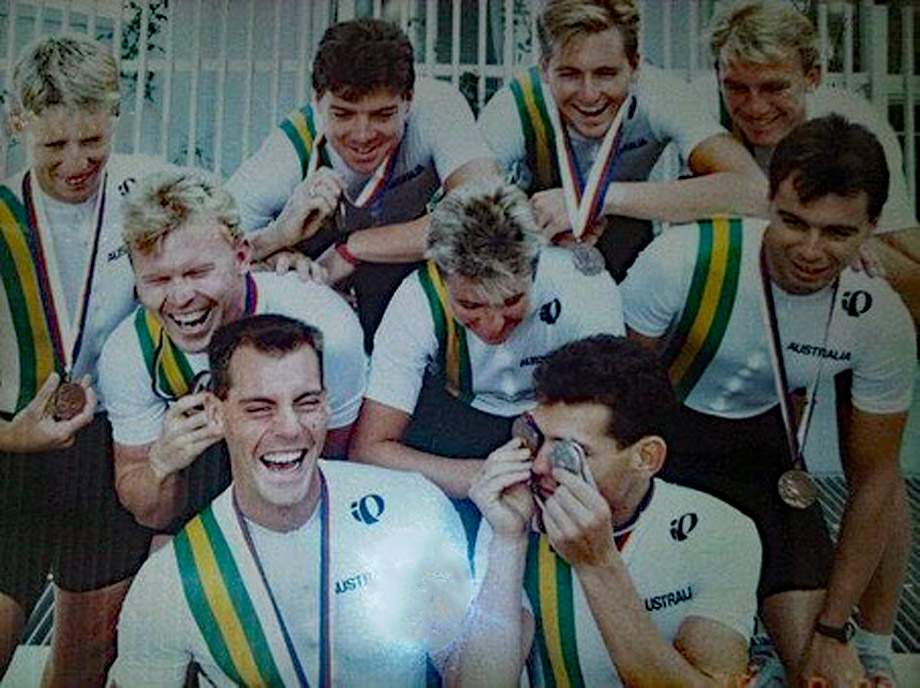 The Australian team travelled to Europe five weeks in advance of the 1986 Edinburgh Commonwealth Games to prepare, basing themselves at the velodrome in Büttgen, Germany. Their coach, Charlie Walsh worked them hard, Vinnicombe told ‘Cycling Weekly’ magazine about his training regime; “In a typical day I’d do six or seven 500 metre efforts on the track, plus two hours on the road and some gym work. We were doing six hours a day on the heavy days and four hours on the easy days.” 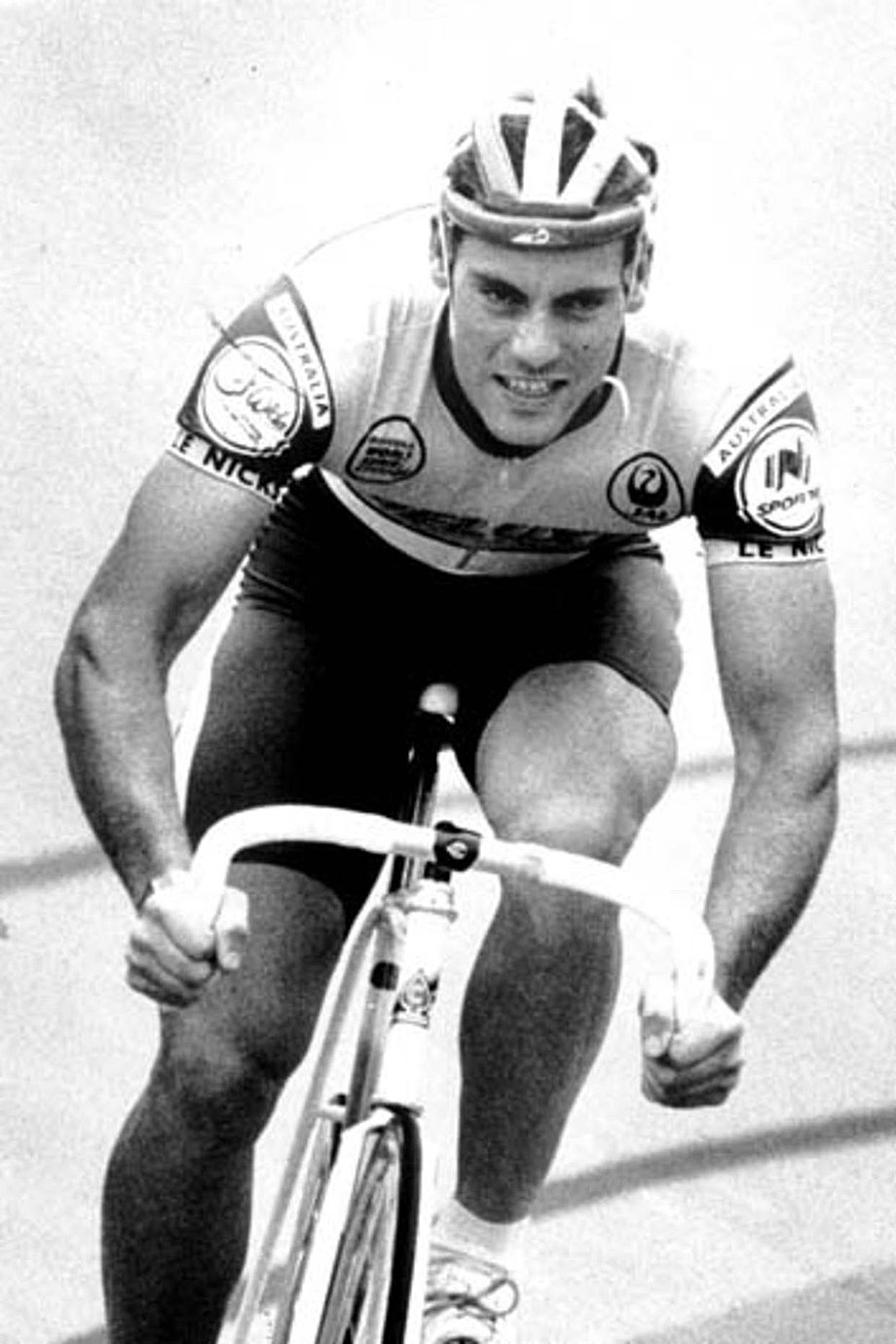 Walsh was a disciple of East German coach, Heiko Salzwedel and was a hard task master, as Australian Olympic cycling medallist and six day star, Scott McGrory told ‘Cyclingtips’ website; “The accommodation in Büttgen was upstairs from the track, and after training if Charlie caught you pulling on the hand rail to help drag your sorry arse upstairs, he instructed you to go back down and walk back up, unaided this time. Apparently it was a weakness of character.” But the discipline and massive work load paid off and Vinnicombe’s 1 minute 6.23 seconds ride gave him the Commonwealth title by one 1/10th of a second from New Zealand’s Gary Anderson on a cold, blowy Edinburgh evening; nothing like the heat of the Australian’s home town of Melbourne in Southern Australia. For those of a technical bent he rode a gear of 91.1” on his disc rear-wheeled low profile machine; nowadays everyone rides 100” plus gears in the discipline.

The World Championships were in Colorado Springs, USA one month after the Games in Edinburgh. Vinnicombe moved up from bronze in ’85 to silver in ‘86 with an extremely fast 1 minute 2.94 seconds ride to relegate the ’85 champion Glucklich to the bronze medal position; but former World Junior Kilometre Champion, Maic Malchow of East Germany broke the world record with a 1 minute 2.09 second ride to take gold. Nonetheless, Vinnicombe had ridden one of the fastest kilometres in the history of the sport and if he continued on his trajectory was a world champion in waiting. 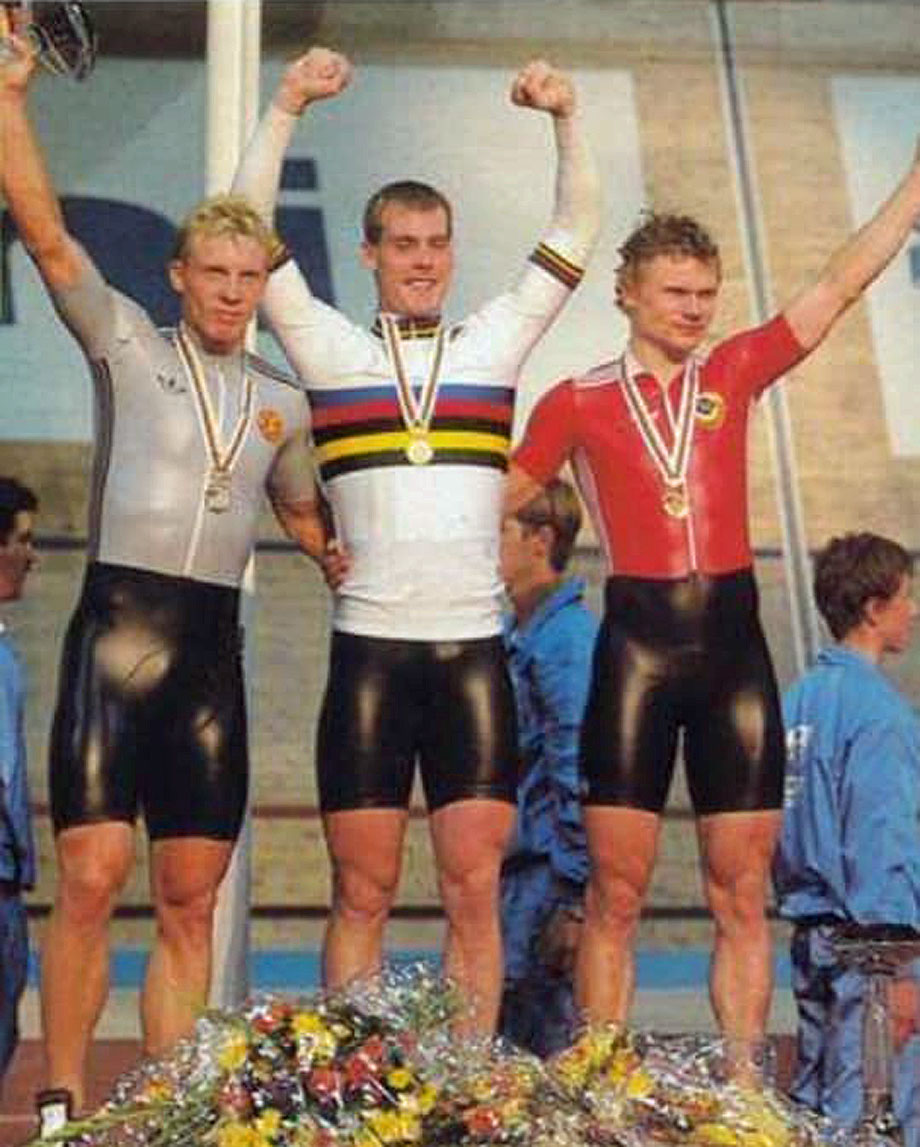 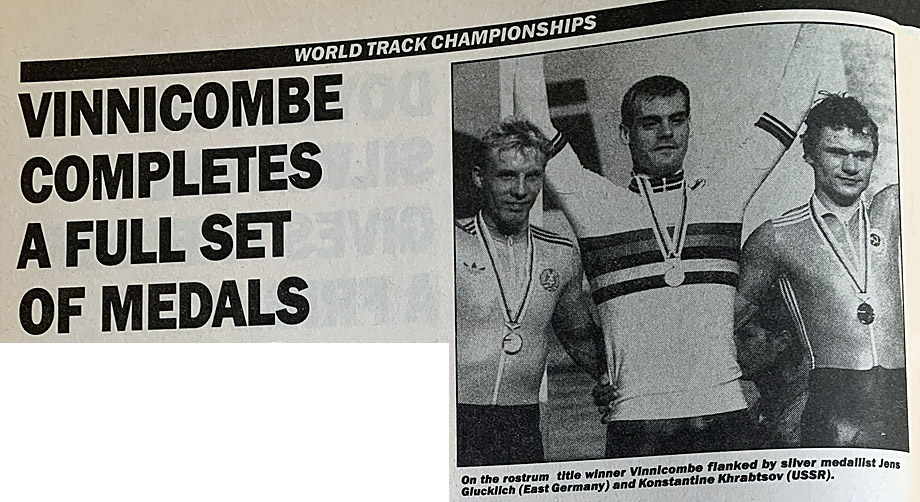 And sure enough, the following year on the Vienna track in Austria the Australian’s 12 months of working on his start technique – previously a weakness – paid off as he took gold in 1 minute 3.173 seconds with Glucklich second. The last lap in the kilometre is often referred to as the, ‘graveyard lap’ but Vinnicombe was faster than all comers over the bell lap and had the crowd in raptures as he claimed the rainbow jersey. 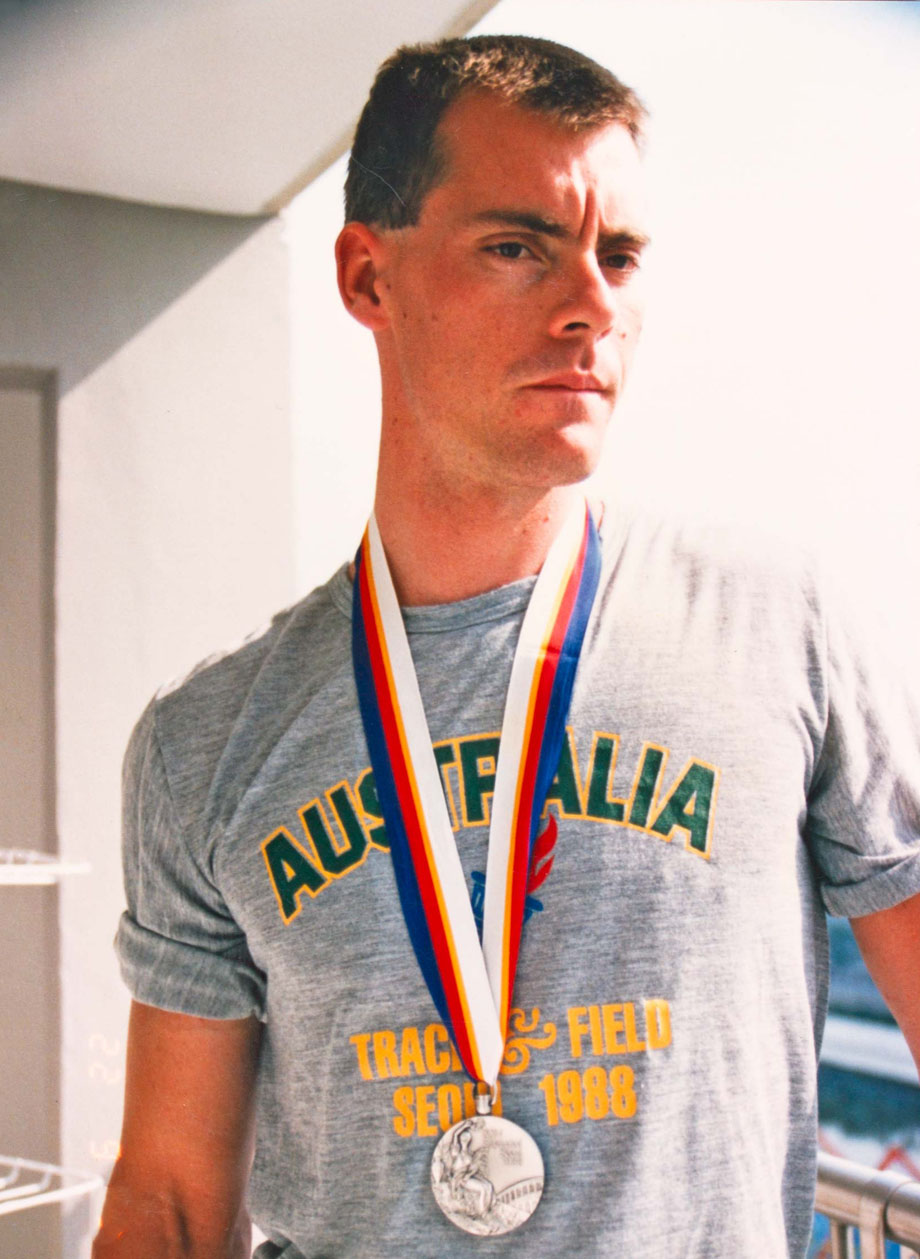 Vinnicombe’s mind was already a year down the road though; “Now I want to win Olympic gold – but then so does everybody else.” In Seoul 1988 however the Australian had to settle for silver as a new name emerged from the USSR, Alexandre Kiritchenko who’s 1 minute 4.499 ride put Vinnicombe 0.285 seconds back – and the man in the wind-cheating red rubberised suit’s time was achieved with a rapidly softening back tyre in the last 100 metres. Vinnicombe was philosophical in defeat, musing that perhaps his choice of gearing had been a little high but taking nothing away from the winner’s effort. 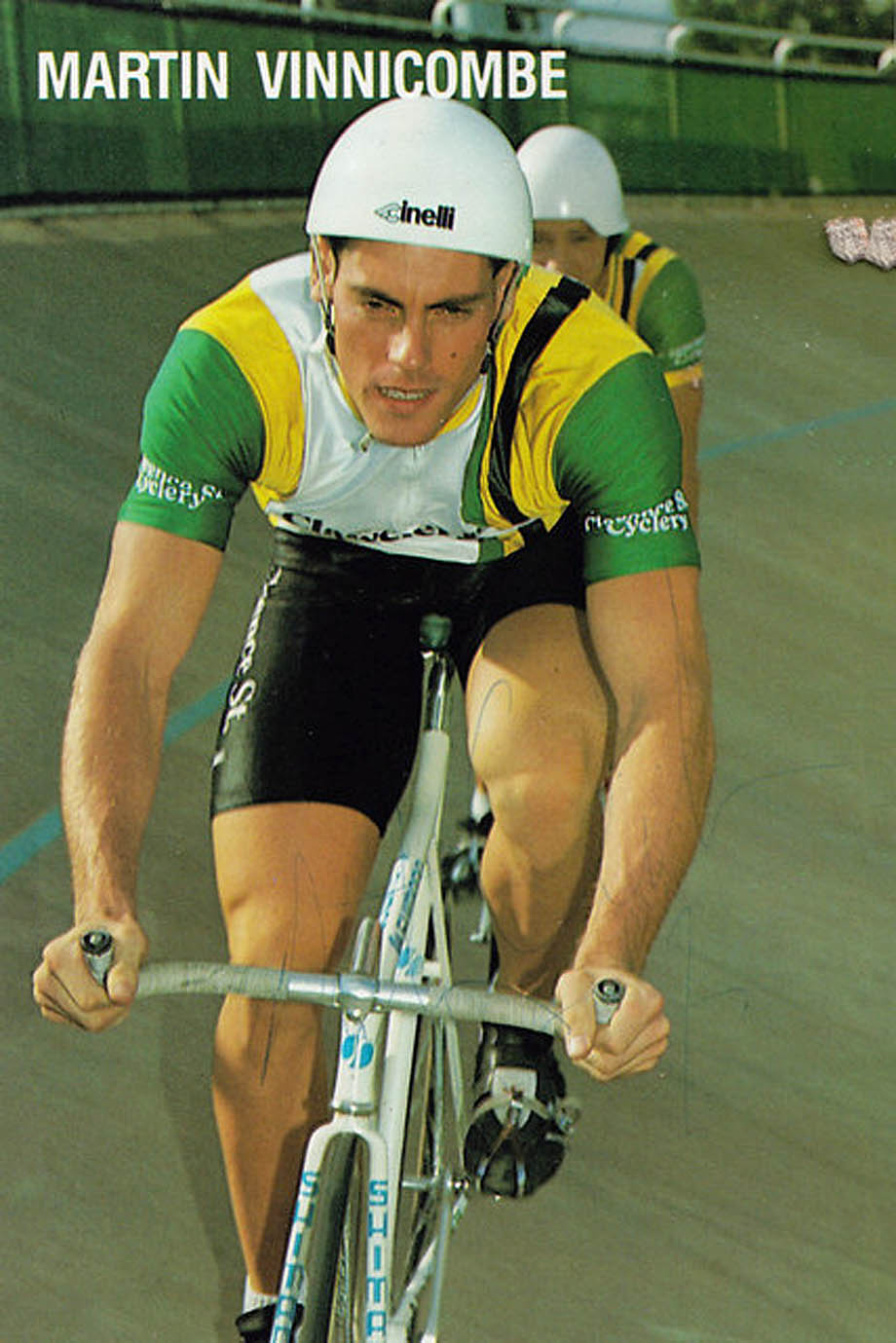 A year on, 1989 in Lyon, France and it was silver again for Vinnicombe as a rejuvenated Glucklich took gold with a 1 minute 1 minute 4.032 ride on a track which was anything but fast; 9/10th of a second clear of Vinnicombe, a big margin at this level. But both men were lucky to enjoy the colour of medals they did, Olympic Champion, Kiritchenko snapped his handlebars with a half lap to go during his ride, grabbed his handlebar extension and still took home the bronze medal on half of a handlebar. 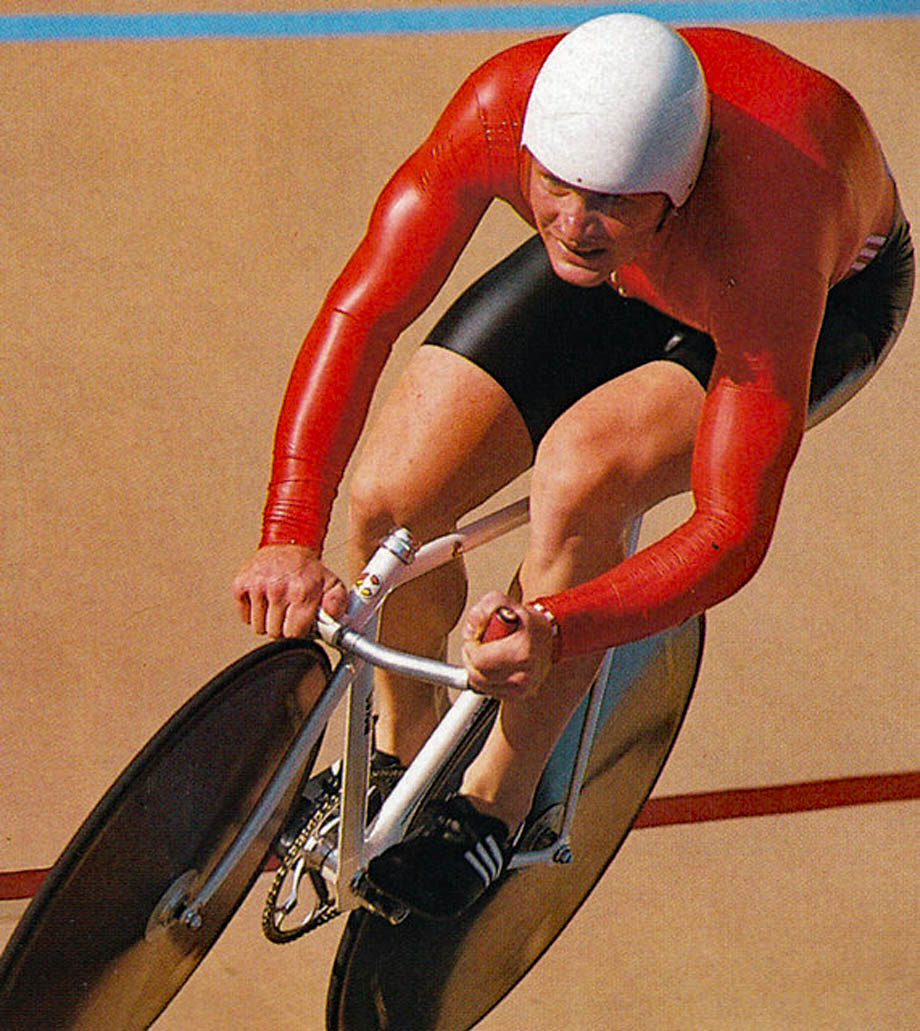 Kiritchenko had to fight of his 3rd place

It seemed inevitable that Vinnicombe would win his second Commonwealth Games gold kilometre medal in the 1990 Auckland, New Zealand competition. So it proved – but his road to the top of the podium in ‘Land of the long white cloud’ was anything but smooth, he crashed in a six day race in Perth Australia some 10 weeks prior to the Games, dislocating his hip and had to restrict much of his training to a stationary bike. Crash or not he still broke the Games record of 1 minute 6.00 seconds held by Canadian flyer, the late Jocelyn Lovell since 1978 with a 1 minute 5.572 second ride; 91.8” the gear ratio this time. 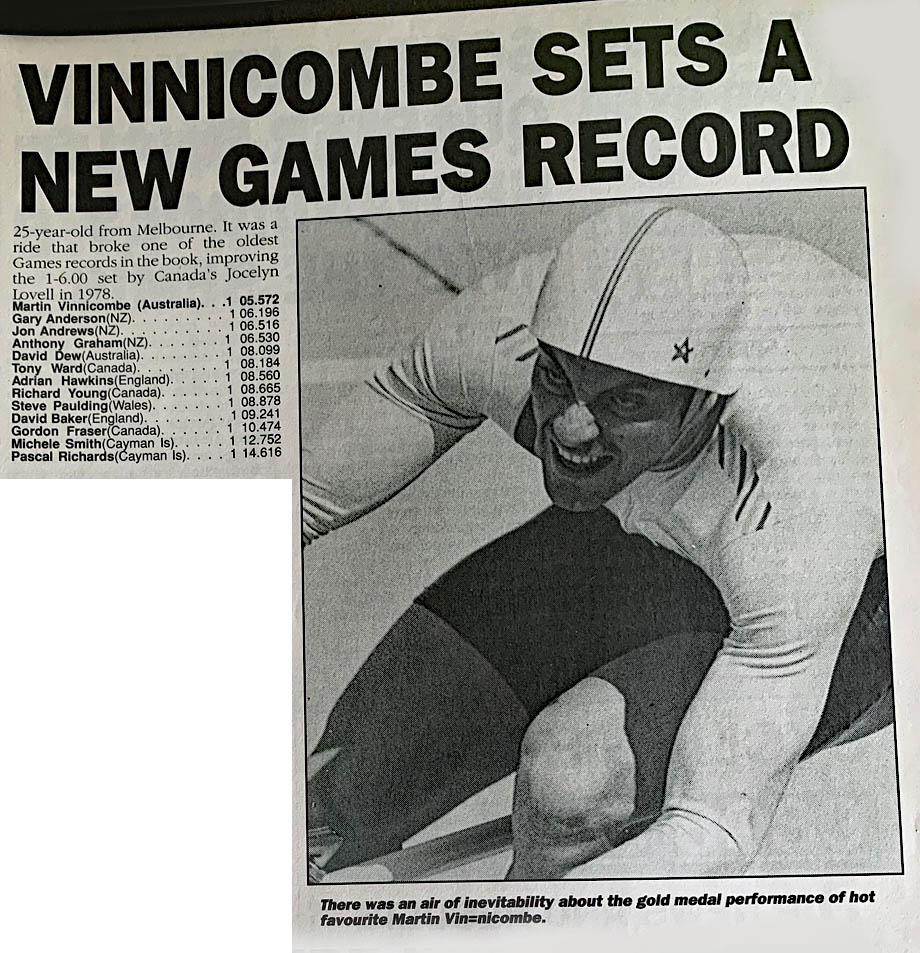 Life was good for the man, the Commonwealth Games mean a lot more to the citizens of Australia, New Zealand and Canada than they do to residents of the UK Mother Land and Vinnicombe was receiving grants from his State Government, acting as a paid ‘public relations officer’ for Australian Airlines and appearing in commercials on Australian TV. There was but one more ‘big ride’ to come. Maebashi City, Japan 1990 and Kirichenko’s handlebars stayed in one piece this time and the rainbow jersey was the Russian’s with a 1 minute 3.565 second ride, some 0.354 seconds clear of Vinnicombe, with Glucklich back in third spot. The Australian declared that for 1991 he was going to change his discipline to the team pursuit to give him, ‘more strength and endurance,’ before reverting to the kilometre for the 1992 Barcelona Olympics. 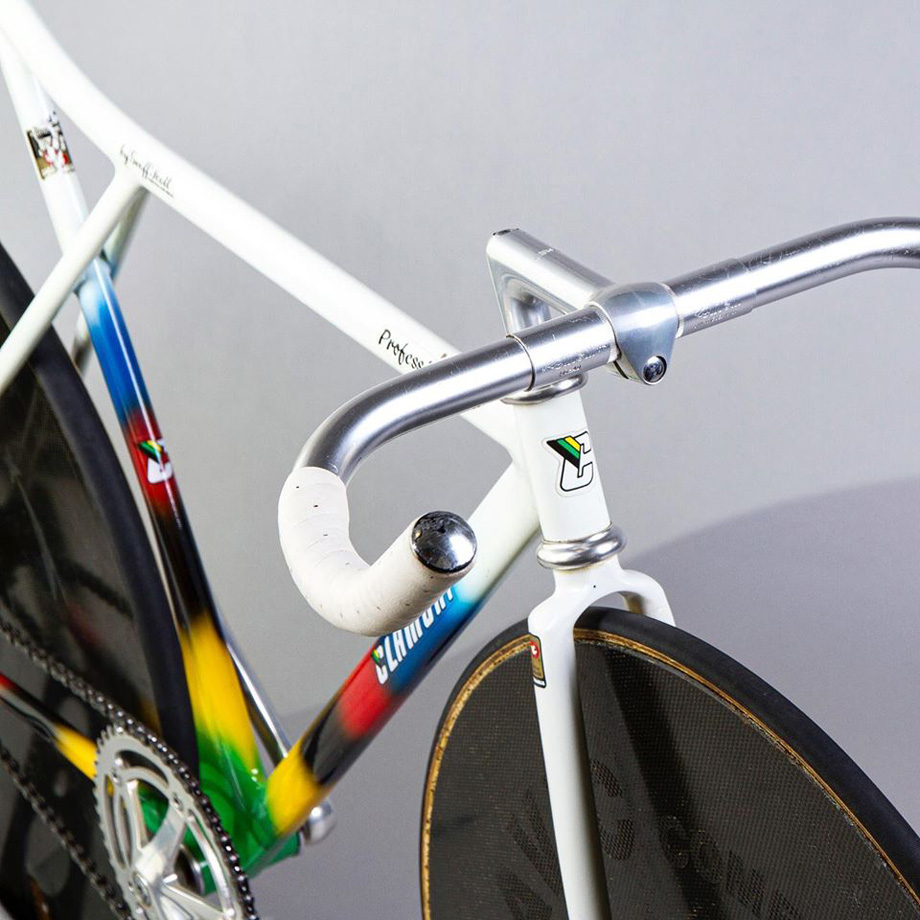 But that wasn’t going to happen. ‘Drugs scandal rocks Aussie cycling:’ said the headline in the ‘Cycling Weekly’ of July 13th 1991 and that’s as far as this story of a Kilometre King goes… 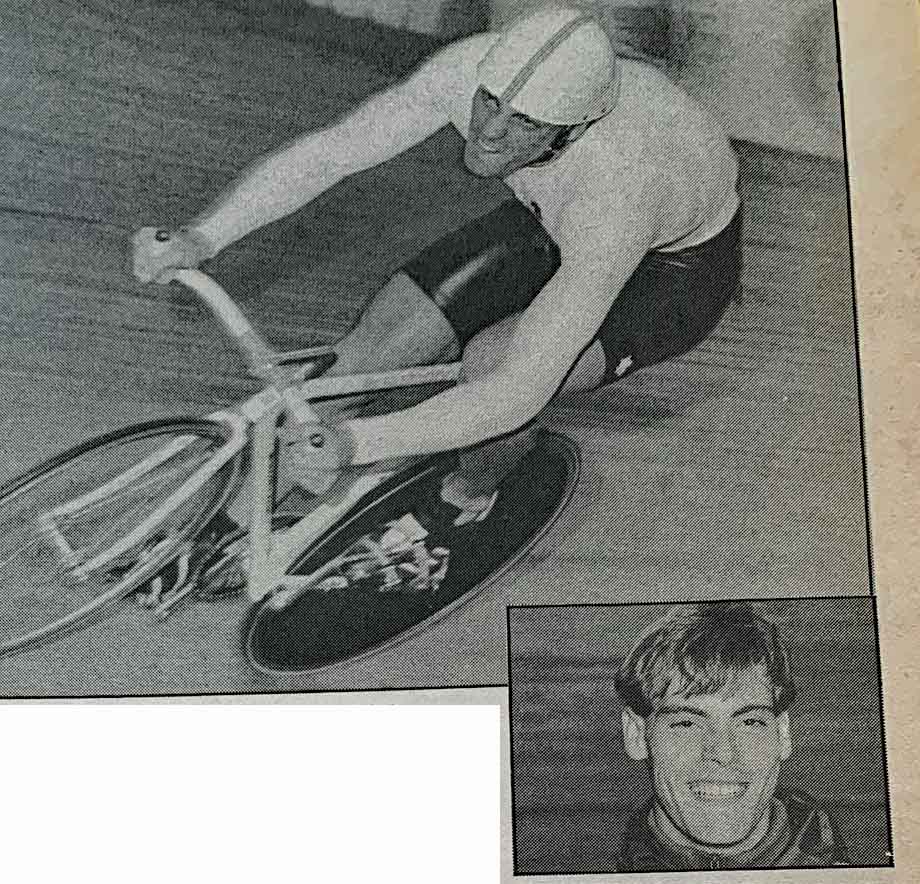