I drank a lot of negronis this year – and what better way to relive the hilights than looking back through an ice filled glass of the capricious cocktail to some of the best moments – a satisfying mix of exotic locales, good friends, and even new tastes. May I present to you, some of my Top Negronis in 2012.

This simple fact that I drank a lot of negronis this year is no different from years past – when you find something this good, it’s worth keeping around. But I can’t say this was my best ever year of drinking the orange elixir, since each one is in a way better than the last, and almost as good as the anticipation of the next. 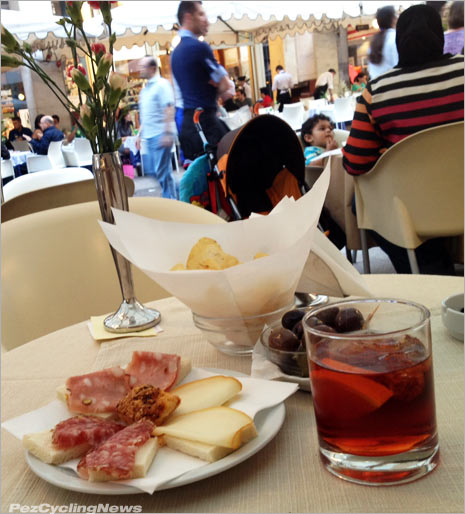 Negroni Tip #19: While location may not hurt your enjoyment of the drink, it can certainly enhance it. I make it a habit when in Milan, to settle in to one of those over-priced cafes near the Duomo, where all the chairs point out to the passing street life, and settle in for some pre-dinner theatre as only the Milanese can serve up – all for about 10 euros.

On Location
There’s no question that the negroni is as close to a ‘holiday in a glass’ as you can get, and having one on an actual holiday is even better. And while I was technically ‘on the clock’ at this year’s Holy Week for the Tour of Flanders and Paris-Roubaix, being in Belgium for April’s cobbled Classics is pretty much anything but work.

Now, seeing as this drink is ‘alcohol forward’ (ie: all booze) one should approach with caution lest one gets knocked on one’s arse by the potent mix of gin, campari, and sweet vermouth. So a lot of jet-lag and a little common sense delayed my first negroni of the trip until dinner of day 2 – which I might add came after a 5:00 AM wake up call, and 6-1/2 hours in the saddle riding the Flanders cyclosportif. 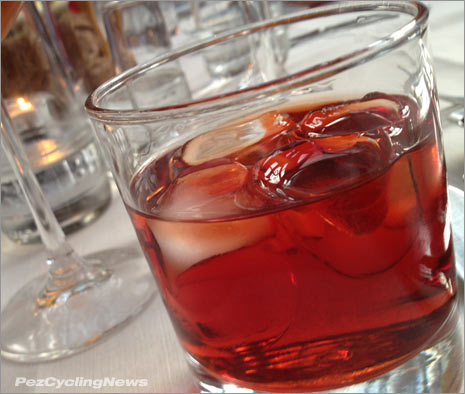 Negroni Tip #5: Serve with lots of ice. Go for big cubes and avoid the small shavers that melt too fast. You want the drink cold – not watered down.

One thing I like about most of Europe, is they know this drink. This particular night our group of 12 or so select journos and hosts had walked a few blocks to a hotel restaurant, where we were seated across the room from the Katusha Team. I ordered a negroni to the usual mix of raised eyebrows and knowing nods from my table partners, but without needing to explain the drink to the server. They do tend to be stingy with the ice across the pond though, and an under-iced negroni is not something any barkeep worth his salt should serve.

Another think I like about Europe is how so many different cultures exist without becoming the melted pot of blandness that is North America. The teams in procycling are like mini-versions of various countries, so watching them at the same race, or in the same room, can be quite entertaining. The funny thing is how many stereotypes get perpetuated simply by guys from foreign countries being, well… guys from foreign countries.

So back to Katusha – I don’t know where the term “Russian mafia” originated, nor have I ever seen anyone I can say for certain was part of this organization… but I’ll say that the term did pop into my mind watching the various riders and personnel interact with the sunglass-wearing team boss at the head of the table. (Okay, the room was kind of overlit, but the sun had set hours ago.) 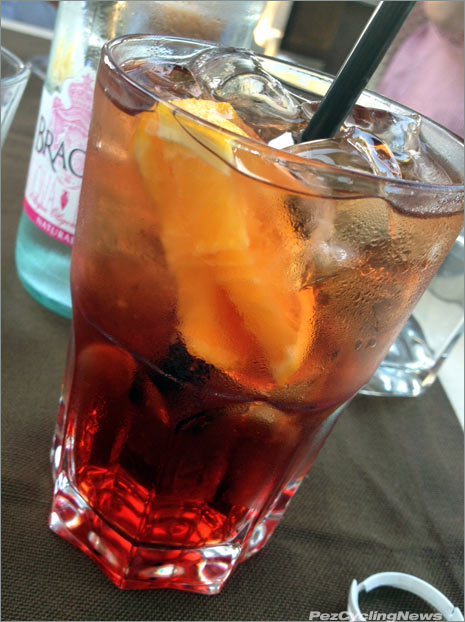 Super-size me: best approached with caution.

”Try This Drink – It’s Awesome”
One comment I get more than most when meeting a fan who knows PEZ, is that I’m responsible for introducing them to the negroni. I freely admit to feeling a certain pride and gratitude when this happens, and suppose that if nothing else, I’ve at least accomplished what I consider something positive.

When a bunch of us met at the Enjoy Garda Hotel after the Giro, I was feeling more than the usual amount of anticipation as we approached cocktail hour with the largest gathering of PEZ-Crew in recorded history. As I led the boys in search of a suitable bar to toast this momentous occasion, I certainly felt some pressure to deliver an atmosphere worthy of us all finally meeting.

After a short walk into old town Peschiera, and a minimum amount of aimless wandering, I steered the group into a bar suitably located with a decent view of the water, and even better view of our comely waitress’ dйcolletage. She was either oblivious, or happy to play along, or both (seeing as this is Italy). 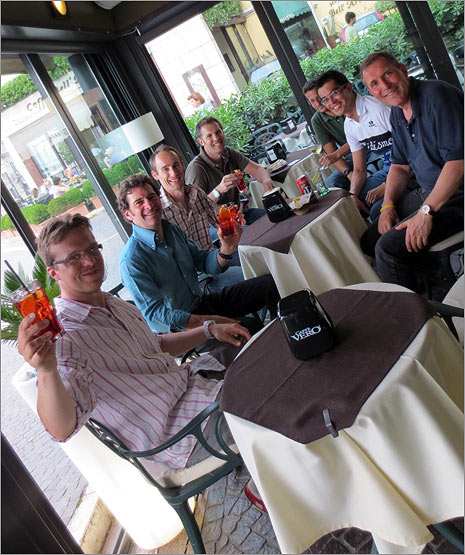 Here’s to good friends- and having your first negroni.

Several of the boys revealed they’d been waiting to order their very first negroni for my arrival – to which I was naturally chuffed – and secretly prayed the faux-hawk coiffed baristo wouldn’t f-up the drink I’d staked my reputation on.

What he lacked in mixological skill (I found these a bit over-ginned), he made up for in volume, as these were among the biggest I’ve seen, arriving in super-sized glasses. From what I remember, that pretty much negated the need to order a second round.

New Tricks For An Old Dog
One thing I’ve learned after several years of drinking the negroni, is the importance of, and influence each of the ingredients has on the final taste of the drink. 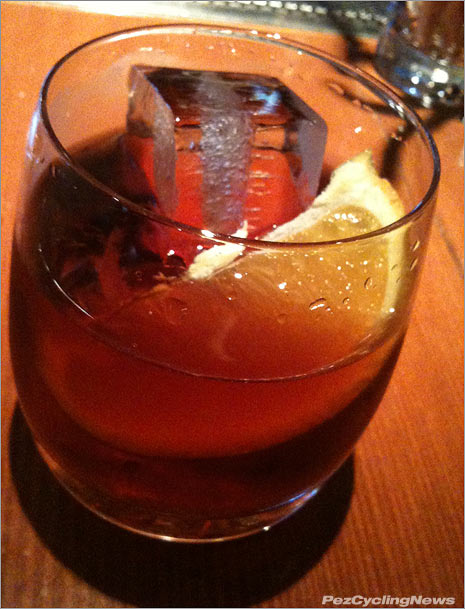 Here’s how it looks served at the Bluewater Cafй.

While the Campari is an essential constant, both the gin and sweet vermouth can be varied to taste, and I’ve refined my own recipe a couple of times over the years to improve the flavor, but always sticking to equal parts of each.

Recently I tried a negroni at the Bluewater Cafй in Vancouver, and gotta give ‘em credit for turning me onto what’s become my new standard home pour. They serve a very tasty “Botanist Negroni” – made with Botanist Gin, Aperol, and aged in American oak (more on this later). And while I’m still pouring at home with Beefeater London Dry, I’ve adopted their addition of Aperol and reduction of Campari, paired with a vermouth like Punte Mes or Carpano.

The Aperol is most easily described as a lighter, more orange-y version of Campari (indeed it forms the basis of the popular Italian apertivo “Aperol Spritz”), and its inclusion here takes off just the slightest edge that Campari can impart. This recipe tastes fantastic, and I’m wholly recommending it for anyone to try. 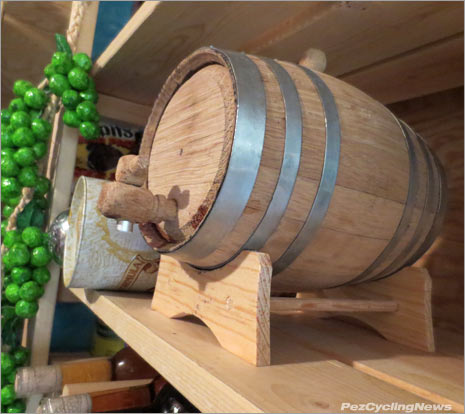 Inside the oak barrel – 2 litres of negronis due for unveiling in late December 2012.

Going Oak: The Next Frontier
Finally – In this new golden age of cocktails, the better bars and more daring mixologists are ageing their own cocktails in small oak barrels, and not limited to just negronis either. This is reported to both add some flavor, and mellow the impact of the original ingredients. This seems like a sound idea, since I already love barrel aged scotches, tequilas, and wines, so a little research revealed the wooden vessels are easy to get either online or at a decent wine/ booze shop. I took the plunge and last week acquired my very own oak barrel – I went with the 2 liter size – thinking this would easily fill my negroni needs.

After a couple of days letting the barrel sit filled with water to ‘prepare’ the oak and prevent leaks, I measured up a full 2 litres of my new recipe, and filled ‘er up. It’s only been a few days, and I’m saving the unveiling of these oak-aged negronis for Christmas (when I hope to really impress my brothers-in-law). So stay tuned and sometime in late December I’ll report back on this – hopefully very tasty – twist on the cocktail.

Thanks for reading –
– Pez 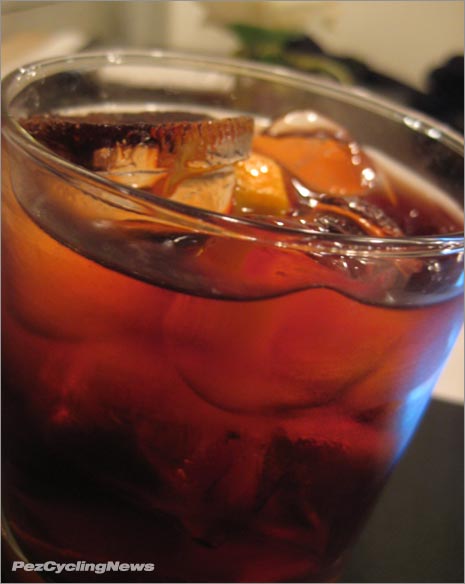