Olympic Rant: Ed Hood hasn’t had a rant from cycling’s Nostradamus for a while, but then according to Vik the season finished after the last spring Classic. Vik was not impressed by the Tokyo Olympic Games, why? Ed found out. 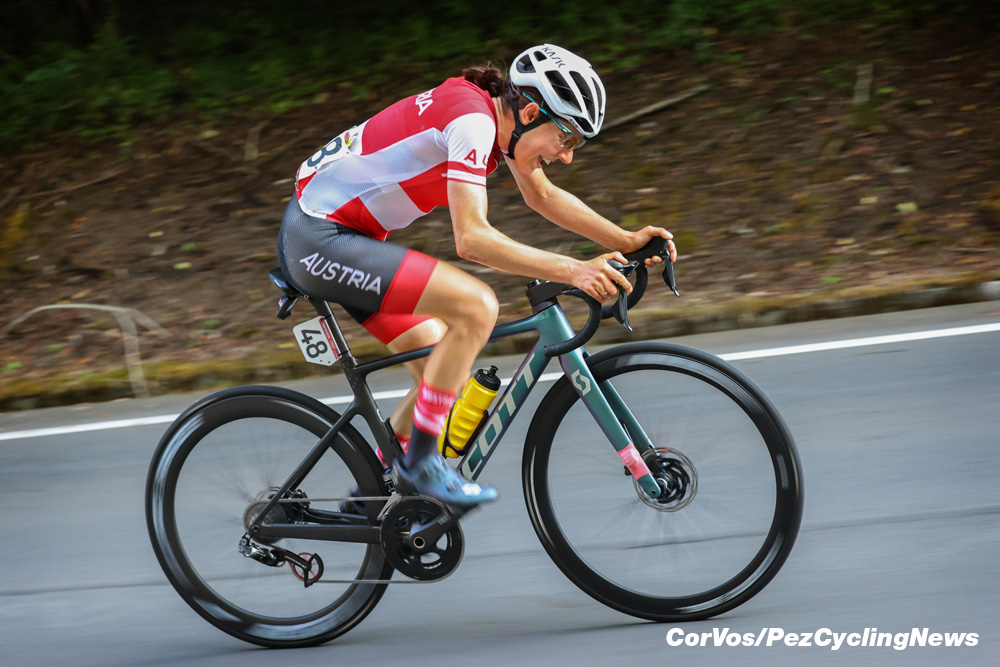 I was in Tokyo with PEZ soothsayer, mentor and guru, Vik the other day. Not physically you understand – we conducted our Tokyo 2020 Olympic debrief over the phone. Before we start, you have to understand that in his eyes sprint and ladies’ events aren’t up for consideration. Apologies then to Ms. Anna Kiesenhofer, surprise but stunning Olympic Road Race winner, Ms. Annemiek van Vleuten, Olympic Time Trial winner and all the ladies who performed with great distinction on the boards of the Izu velodrome. And also to Messrs. van den Berg, Lavreysen, Buchli and Hoogland of the Netherlands who dominated the individual and team sprint events. 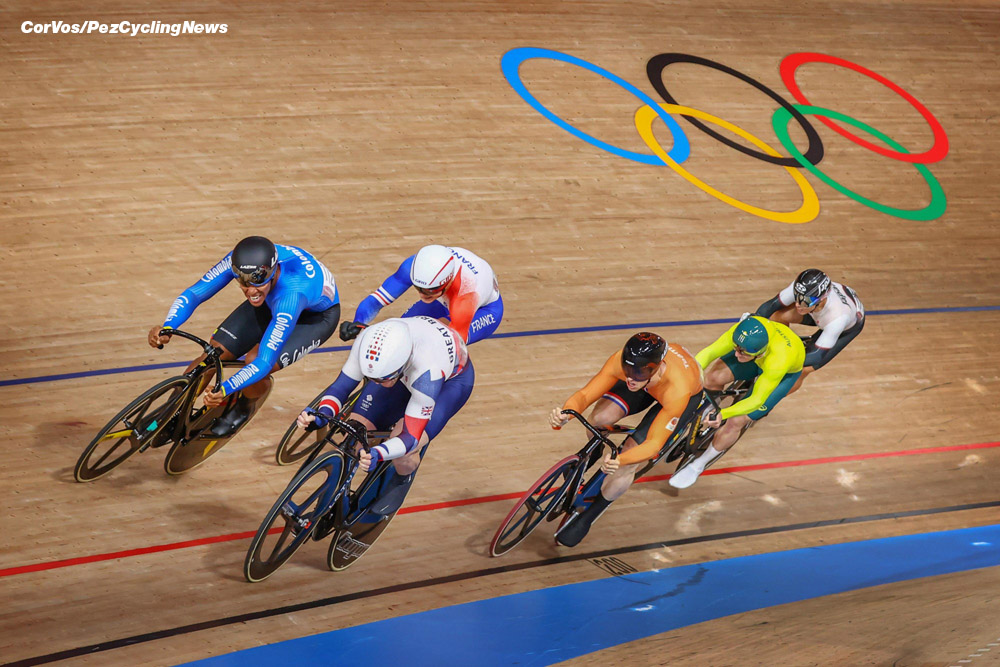 Stunning ride by Jason Kenny in the keirin

When I mentioned Jason Kenny’s brilliantly opportunistic win in the keirin it was dismissed by Vik with; “I thought he was retiring after the Rio Olympics, he must have realised he’d have to get a real job?” It’s nothing personal against Mr. Kenny, Vik used to refer to the dominant GB team sprint squad from a few years back as, ‘The Teletubbies’ after the kids TV show of that name. If you’re not familiar with the programme, Google it. 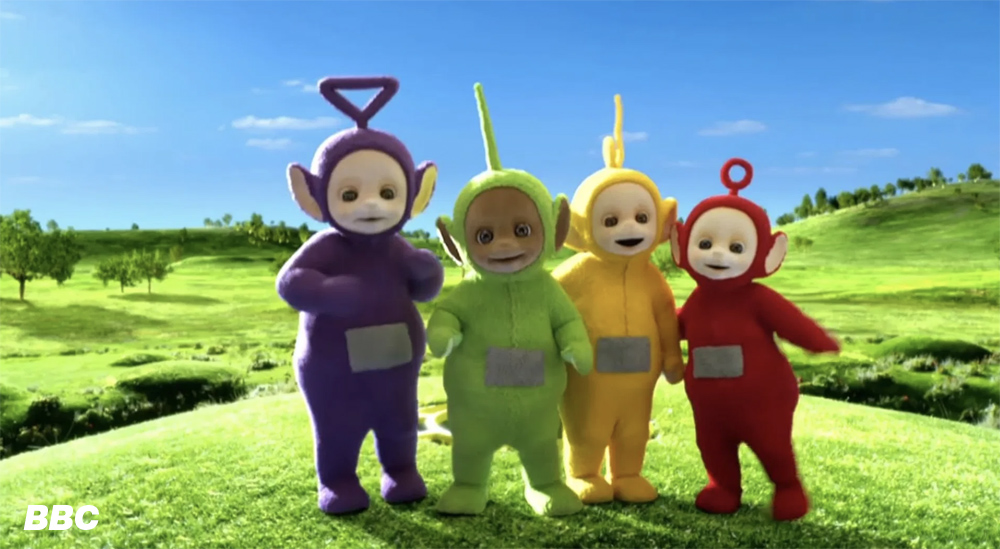 He’s just not ‘into’ unfeasibly big men who can only go fast for a lap or two and never go out in the rain or sample cobbles. Whilst he doesn’t lament the passing of the one kilometre time trial from the Olympics, he does miss the individual pursuit, as with the team pursuit and madison it ‘crosses over’ from the road. And perhaps unsurprisingly he’s a fan of ‘Pippo’ Ganna – he does like big, strong boys, even if they’re primarily time testers. He reckons Ganna could have beaten the Danes on his own, when I said that was stretching it a bit with the team pursuit times at 3:42.032 now some 20 seconds quicker than Ganna’s individual world record of 4:01.934. 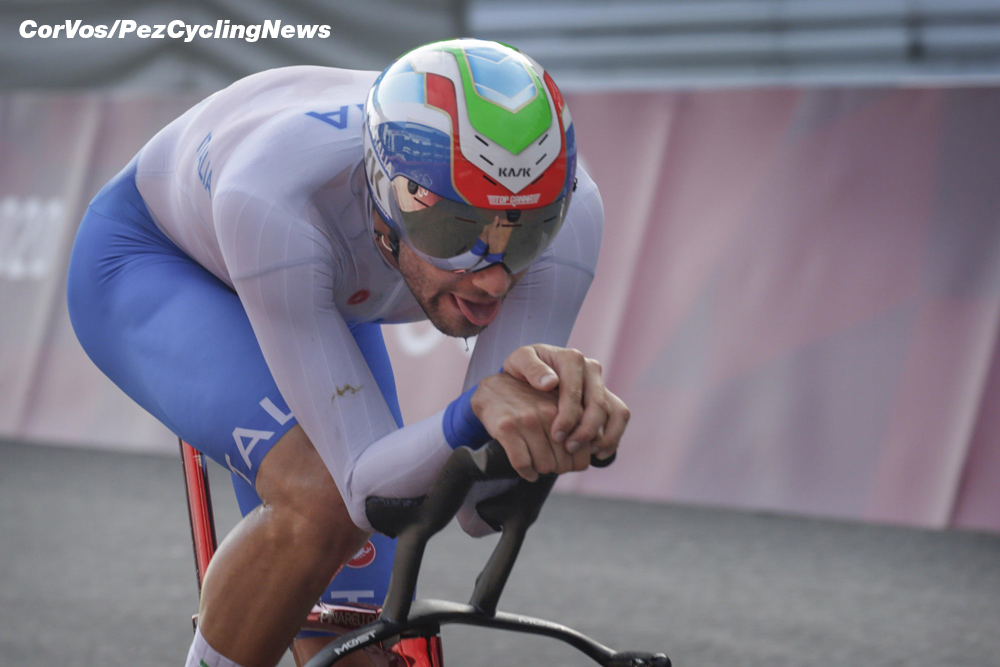 Ganna could win on his own?

At that he said that Italian track coach, Marco Villa should pull in another big strong ‘chronoman’ in the shape of lead-out beast, Edoardo Affini of Jumbo Visma, the two of them could ‘take’ the Danes without any other help. Vik loved that giant Ganna picked up his little coach, Villa and cuddled him after the team’s beautiful victory. I’ve not spoken to wee Marco for a while but next time I bump into him, I’ll be sure to mention about Affini. 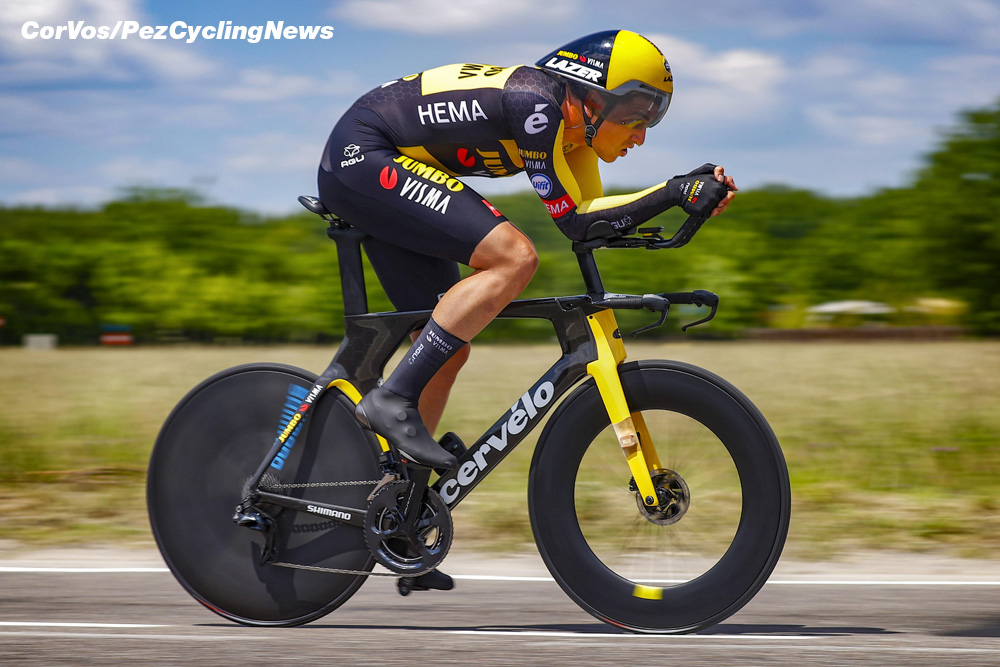 The Aussies’ crash in the team pursuit was dismissed as their own fault for messing with new-fangled 3D titanium printing on their handlebar extensions whilst the Danes should have been disqualified for their ‘shin tapes’ – Vik quoting UCi rules, I wasn’t expecting that one. We did agree though that the Danes ‘running up the back’ of unfortunate Charlie Tanfield of GB and crashing in the team pursuit was a ‘racing incident’, they could hardly have expected Tanfield to be ‘parked up’ in front of them. 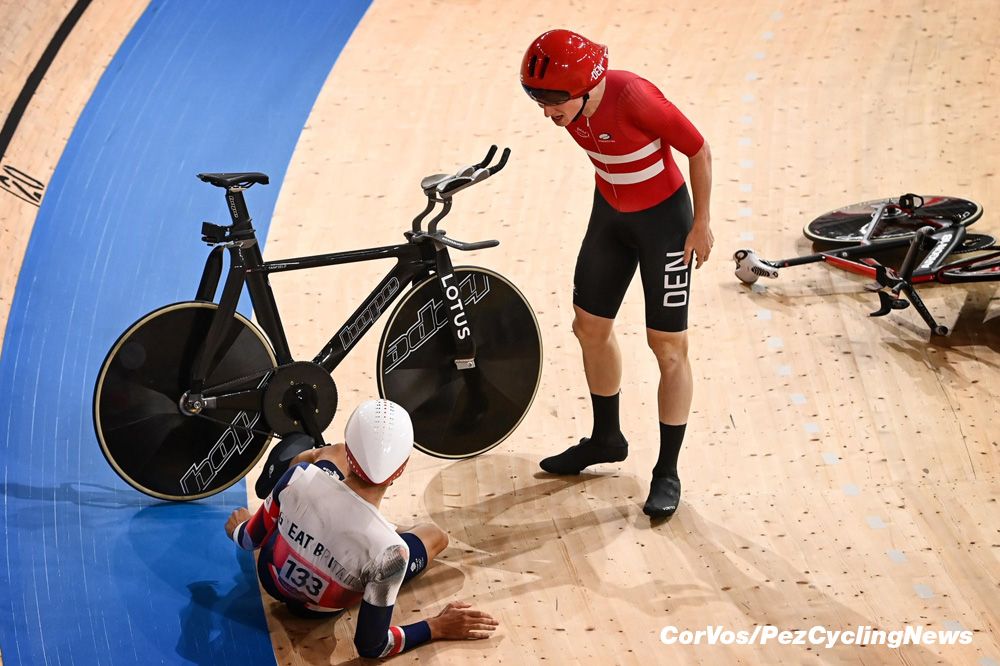 Just a ‘racing incident’ – Nothing to see

Vik echoed the thoughts of Bradley Wiggins regarding the team pursuit that the once dominant GB squad has been caught and over taken by other nations. And those ‘rad’ Lotus bikes? ‘Over rated!’ 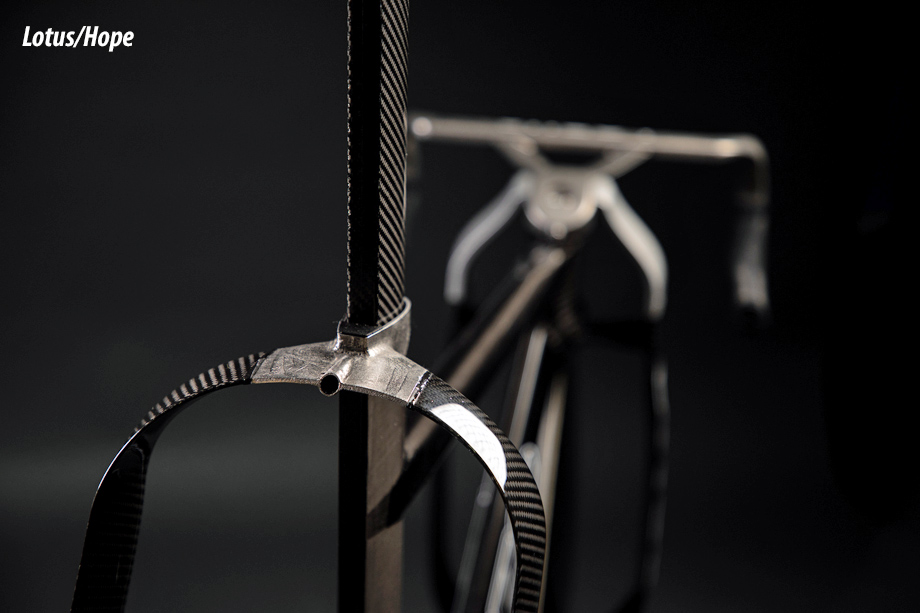 He reckoned the Olympic madison was the best he’d ever witnessed and was full of praise for the Danes win in the madison albeit he reckoned that Michael and Lasse looked old and wasted on the podium next to the fresh faced, youthful French and GB riders; Benjamin Thomas & Donavan Grodan and Matt Walls & Ethan Hayter. ‘Old and wasted but gold medallists’, I reminded him. But it certainly was a terrific race and a shame that the battling Belgians missed out on a medal albeit both the French and GB duos both thoroughly deserved their medals. 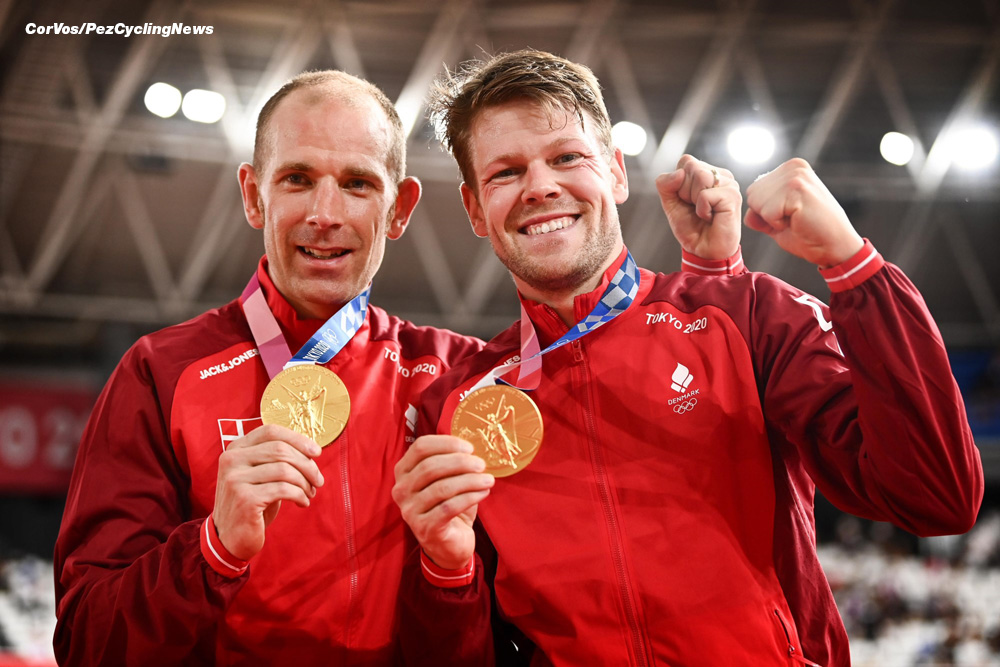 He was fulsome in his praise for GB rider, madison silver medallist and omnium winner, Matt Walls – albeit the omnium wasn’t up for discussion either – Vik not realising that Walls is a UCi World Tour rider having ridden and finished the Tour of Switzerland and Sibiu Cycling Tour in Romania in recent months. Whilst Matt got plaudits, Elia got ‘pelters’ as they say in Glasgow; “Viviani left Deceuninck to go to Cofidis because Patrick Lefevere wouldn’t give him six weeks off to prepare for the omnium, that was a waste of time!” When I pointed out that the Italian had taken bronze in the omnium, Vik’s retort was; “what about the madison, he was invisible, he’s meant to be a six day man isn’t he?” 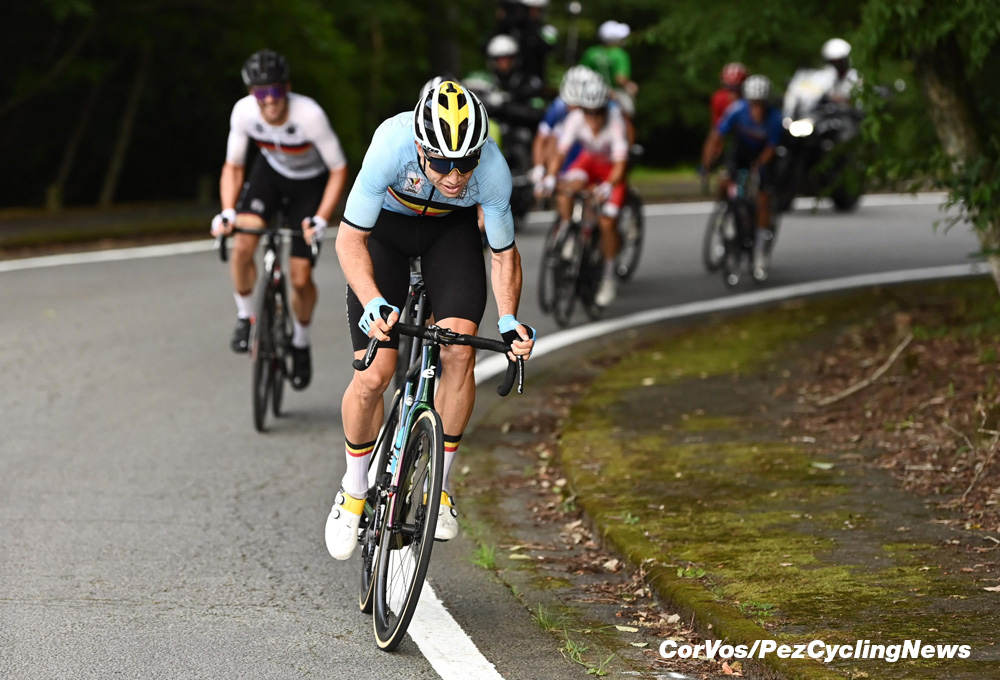 With the track duly dissected, we moved to the road; Carapaz’s win in the road race didn’t meet with approval; “Wout would have been a more deserving winner.” 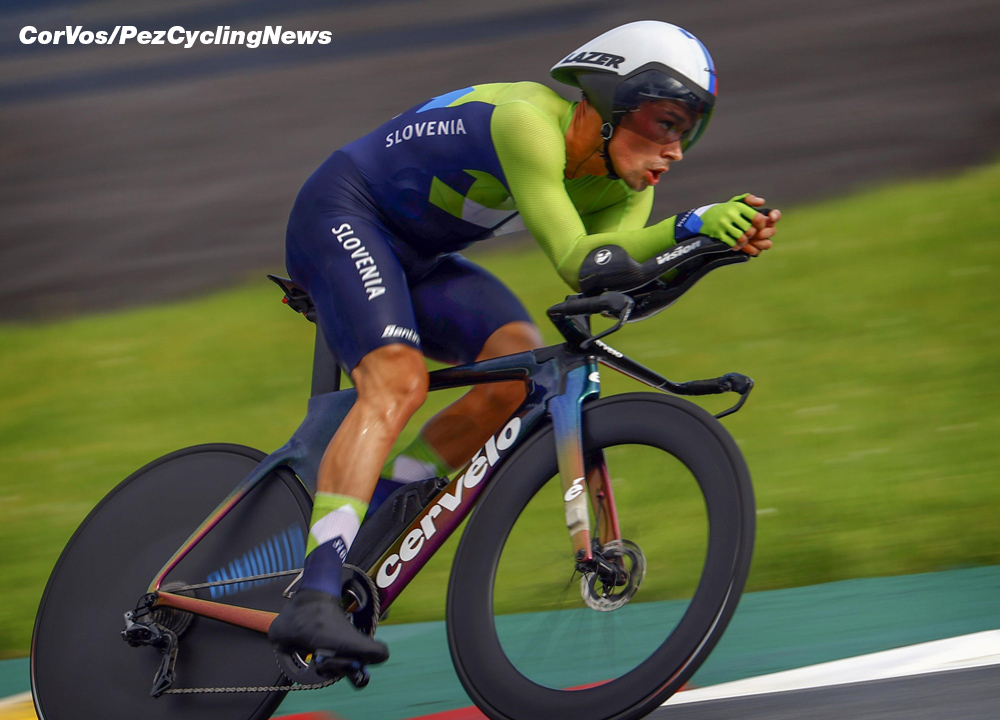 Primoz’ time test win met with approval though but Remco’s ninth place time trial ride sparked a reaction; “that wasn’t much of a ride – and that laddie shouldn’t be mouthing off like he does, he’s got too much to say, Lefevere should get rid of him, he’s not produced the big wins that he was supposed to.” 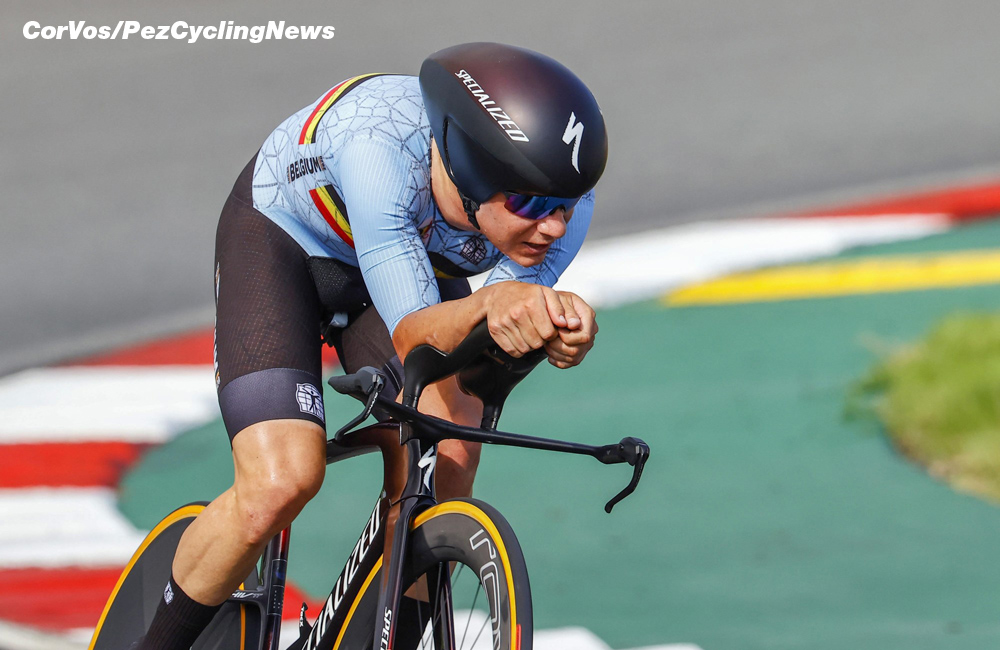 Disappointing ride in the Olympic time trial from Remco

It seems that Vik’s love of all things Belgian doesn’t extend to the small former soccer player and when I pointed out Remco’s stunning victory to take leadership in that very day’s stage in the Tour of Denmark, I was told; “there are a lot of amateur teams in that race, it’s not a particularly high level field.” There are indeed continental teams in the field but also a dozen WorldTour and ProTeam squads. 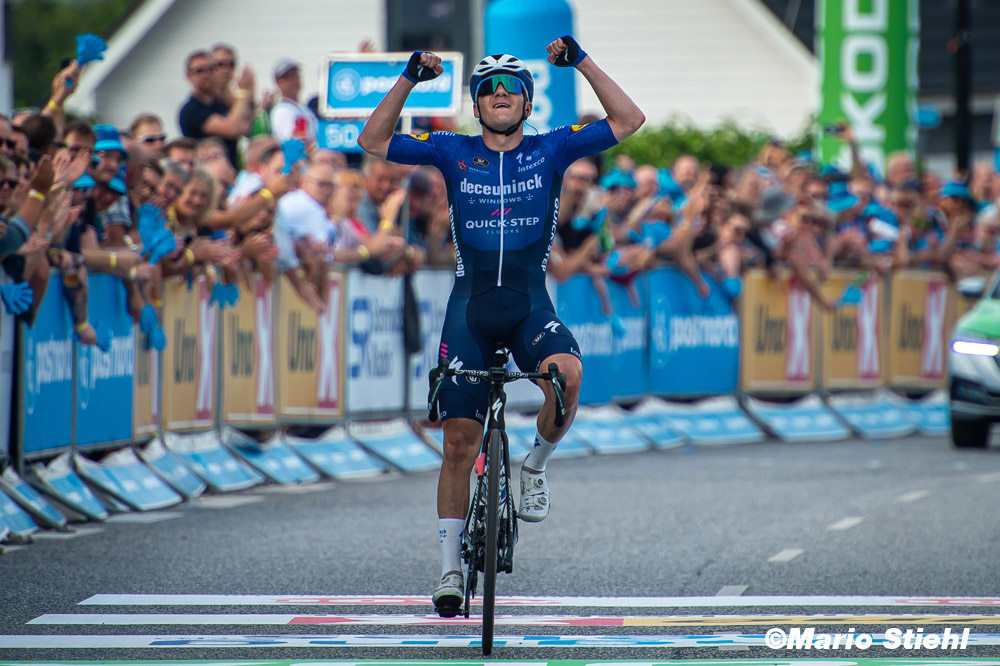 Not a bad ride from Evenepoel in Denmark

But we hadn’t finished with Deceuninck – Quick-Step, “Lefevere should quit, the team performs brilliantly but it’s down to the guys who work for him and who drive the team cars, Wilfried Peeters, Davide Bramati, Tom Steels, Rik Van Slyke, they’re the men who decide the race winning strategies. The remarks he made recently about riders’ mental health and Sam Bennett in particular, comparing his return to BORA to a battered wife going back to her abusive husband should never have been made. Lotto Soudal are emptying out Marc Sergeant and Herman Frison at the end of the season, things are changing, the old guard has to be changed!” 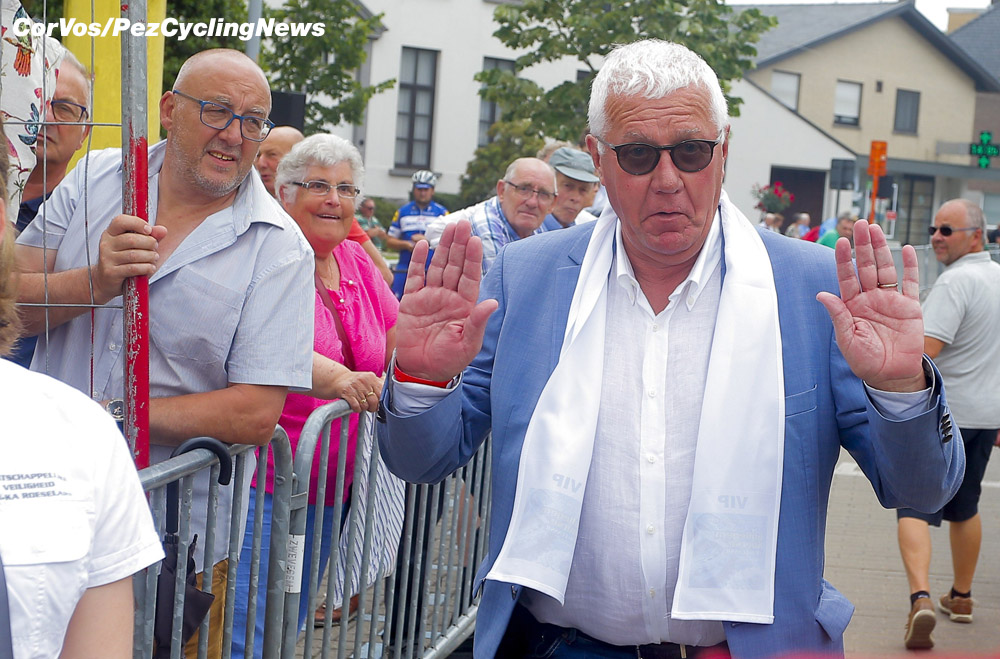 Well I never, Vik the ‘inclusive, politically correct man of the new millennium’, – well, almost. Such a pity we have to wait three years for his next Olympic rant. . .