The day after the ridiculously scenic Bucks County road race was the equally exciting and scenic Doylestown Criterium. Here’s ace photographer, Darrel Parks’ view of the day from beind the lense.

-Words and photography by Darrell Parks-

This year Pennsylvania’s September weekend of racing, now known as the Thompson Bucks County Classic, featured a new sponsor and an all new course for the Saturday Road Race. One thing that had not changed was Sunday’s Doylestown Criterium, still held in conjunction with the very popular Doylestown Arts Festival. No change was necessary for a cool event that John Eustice has been putting on for the last 9 years. 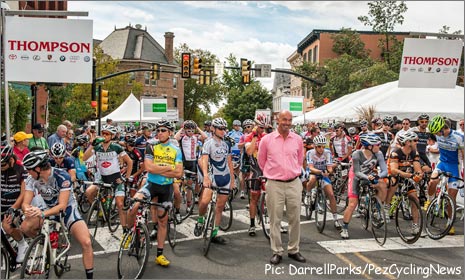 Eustice before the start

The course itself is fairly long for a criterium at 1.4 miles in length and features plenty of turns, dips and hills. 35 laps are on order for the Doylestown course turning it into a 50 mile long suffer fest. Shortly after the Start/Finish line there’s a nice High speed downhill run with a precarious right hander at the bottom. It’s great to shoot this corner from the inside as the riders come within inches of the curb and sometimes your lens. As a bonus you end up with a cool stone church as your background. 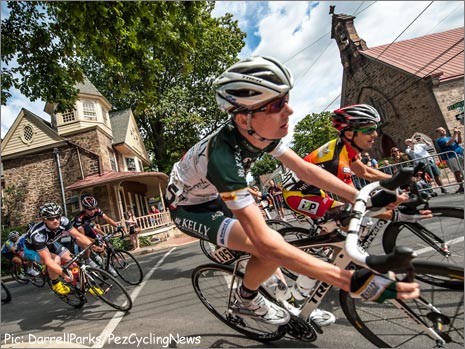 This fast turn at the bottom of the circuit provided plenty of action for spectators and photographers alike.

This turn is followed by a long, flat run to the first left hand turn of the race. This long straightaway has the riders strung out as they carry their downhill speed through the turn. Its better to capture shots like this towards the beginning of the race when the field contains the most riders. Later on the effect of the riders, being seen as deep into the image as your eye can take you, will be lost on the diminished size of the race due to attrition. 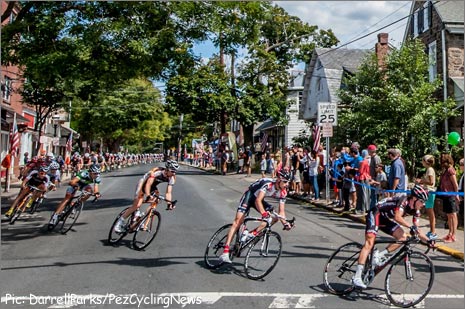 The bunch all strung out, mid lap.

After making the left turn the course heads downhill once again. I noticed that this part of the course had numerous American flags posted along the route (maybe because it was Main Street!). I always try to incorporate flags into my shots as they add an element of patriotism as well as the festive atmosphere that goes along with a bike race. They can also provide a dramatic dose of color to your image as well. Along with the flags this section of the race course featured another cool stone church. Interesting architecture will almost always add a compelling element to your photographs. 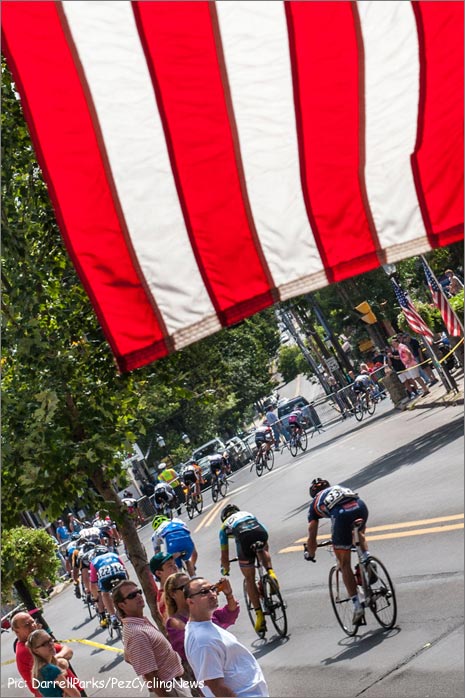 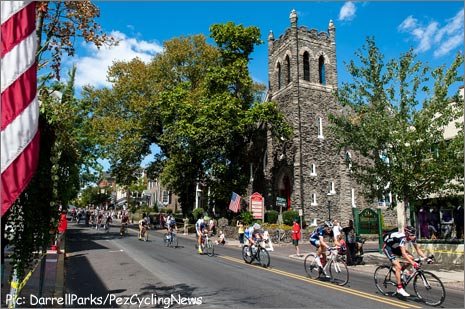 The course next travels through the residential part of town filled with lush landscapes and some amazing Victorian architecture. Here the race begins to slowly regain some of the elevation they’ve been losing on the first half of the lap. It’s also here that I find the biggest race party of the neighborhood. It turns out that the Kremser family has been gathering its friends and neighbors to watch the race from their front yard for the past 9 years. They were even kind enough to offer me to join in the festivities! (of course I had to turn them down…I’m working here!) 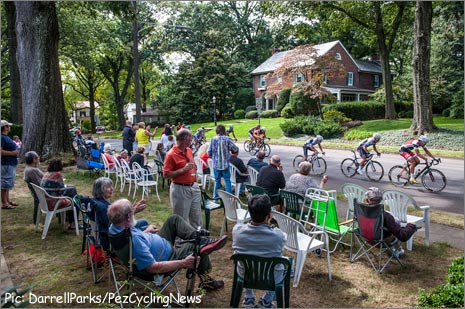 The final turn leads back onto Court Street with its multitude of quaint shops as well as the 300 meter uphill slog to the Start/Finish line! It’s also home to yet another very scenic church! This one is a bit different as it was not made from stone. It was however wrapped in a nice coat of yellow paint to give the image some color. The pace car rolls through and I noticed the “Laps Remaining” card was down to 6. Cutting it a bit close, it was time to quickly make my way towards the finish. 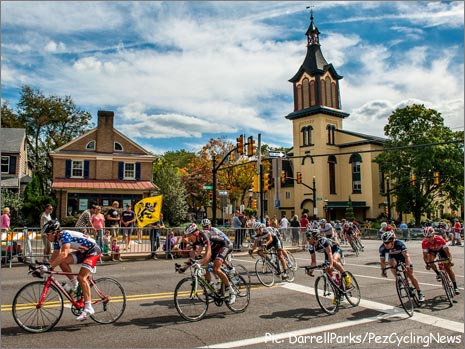 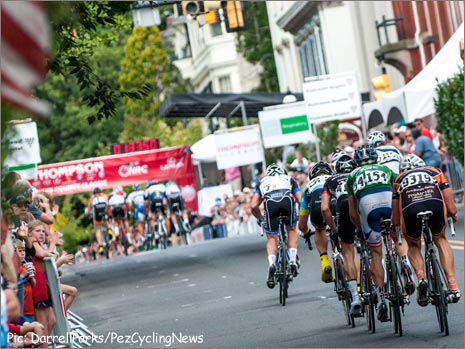 As I arrived at the finish with 3 laps to go, the field was basically split into 2 pieces. A six man group was away which included Alexi Shmidt (Team Type 1 Devo), Steve Fisher (Hagens Berman), Eric Marcotte (Elbowz Racing), Pierrick Naud (Ekoi.com), Cody O’Reilly (Team Optum p/b Kelly Benefits Strategies) and Robin Carpenter (Chipolte/First Solar Devo). They were able to hold off a hard charging peloton until one to go when Frank Pipp (Bissill Pro Cycling) managed to bridge across. 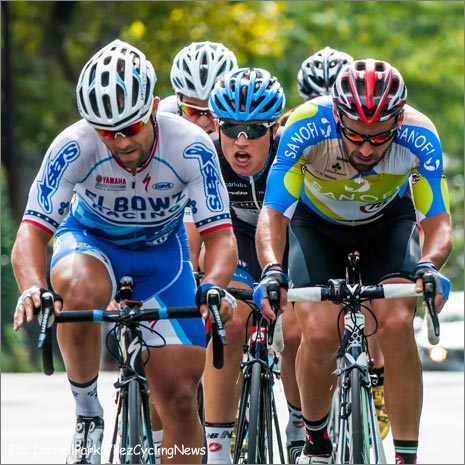 My money was on Pipp as they headed into the final lap but the long uphill finish didn’t allow that to happen. Pipp had been very active all day, animating the race and taking part in several early breaks. When it came time to sprint there was nothing left in the tank. These long uphill sprints really let you see the suffering on the racers faces. You can see them digging into their souls as they search for an extra ounce of energy to try and get them across the finish line first. 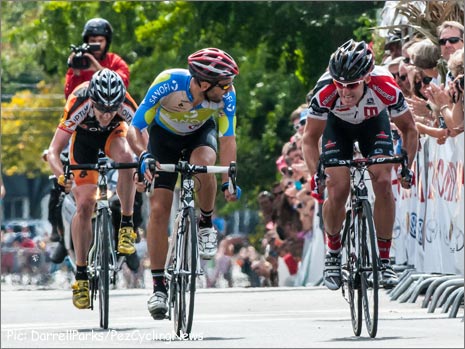 The sprint for second was tight…… 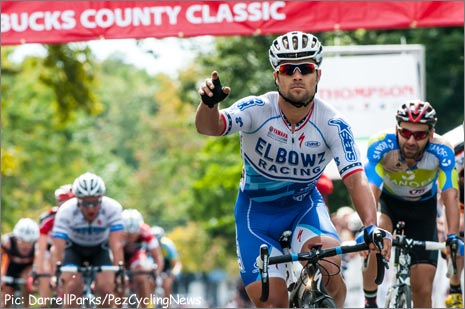 But the sprint for the win was a clear decision.

Eric Marcotte managed to find a little something extra and got over the line first for his Elbowz Racing team. A completely spent Frank Pipp of Team Bissell Pro Cycling managed to hold on for second place while Team Type 1 Devo had Alexey Shmidt rounding out the podium in third. Thanks again to John Eustace for keeping this classic alive. 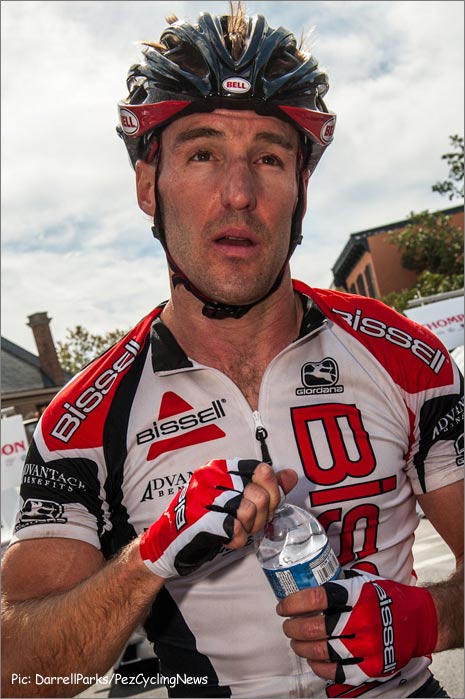 The face of a man who has given it everything. 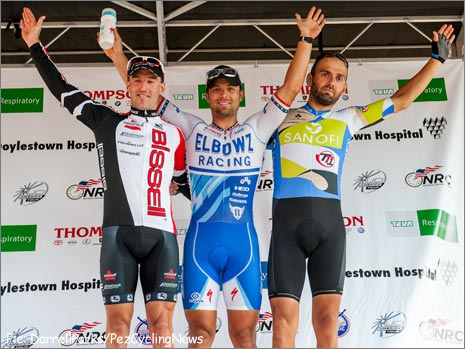 My Ride With Lance: The Replay