Now in its 5th year, the USA Pro Challenge has become a main event on the US racing calendar. This year’s edition was full of exciting racing and beautiful Colorado scenery. Here’s a little insight into some of the images I captured during my week in the mountains of Colorado!

Stage one of this year’s edition was a circuit race starting and ending in Steamboat Springs. The riders would complete two laps of a 50 mile circuit. I was granted photo motorcycle access for the first lap and would be dropped off near the finish line afterwards. This left me plenty of time to figure out how I would shoot the finish at the end of lap two. 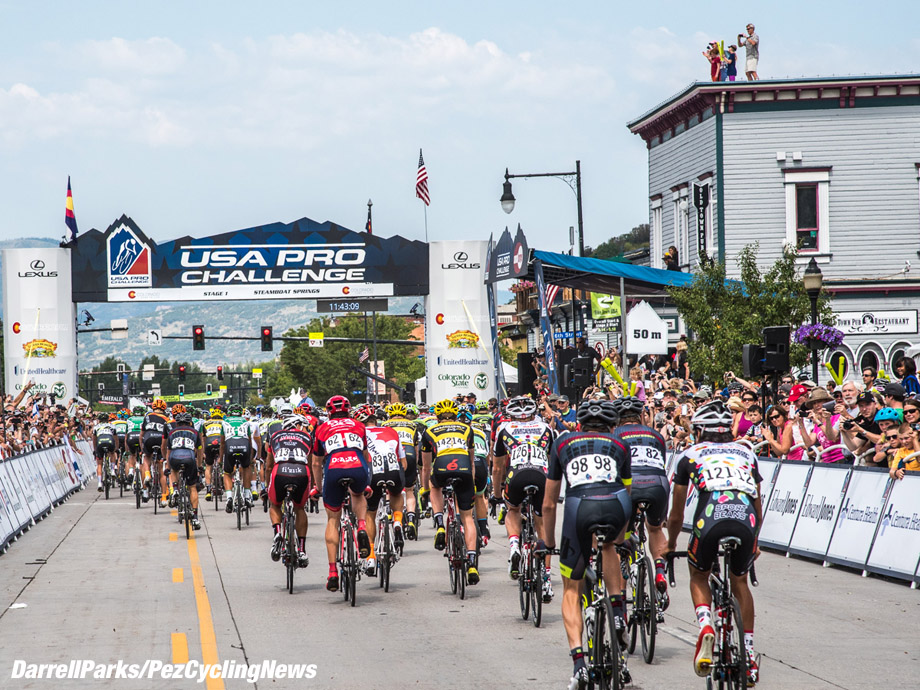 The race is underway! Now how did they get up there?

I didn’t want to shoot it from the photographer’s pen as I wanted something a little different. Ten to twenty photographers all shooting from right next to each other tends to yield rather identical images. As we rolled through the start I noticed some fans on the roof of a two story building just past the finish line. That rooftop was where I needed to be to get my finish shot. 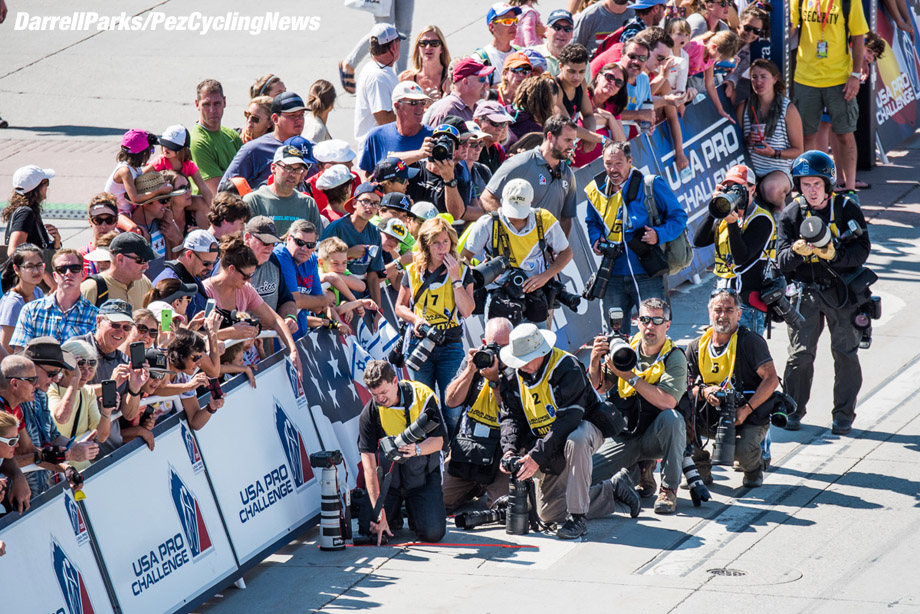 I didn’t want to shoot the same finish shot alongside all the other photographers. Nothing personal!

Now to figure out how to get up there. I went inside “The Old Town Pub and Restaurant” on the first floor of the building and asked the hostess if I could shoot the finish from the roof. She was somewhat reluctant but eventually said yes. She told me I would need to be able to climb up a sketchy ladder to get there. I said “challenge accepted” and followed her out the door to a staircase accessed from the side of the building. The stairs took me to an intermediate roof top. And there it was, “Mr. Rickety”. A super lightweight, almost disposable, eight foot tall, aluminum ladder that was so flimsy, you might think of throwing it away after using it once or twice. It was precariously leaning against the gutter of the upper roof, its top just barely above the surface of the roof. I slowly worked my way up the ladder and onto the rooftop, fearing for my life the entire time. 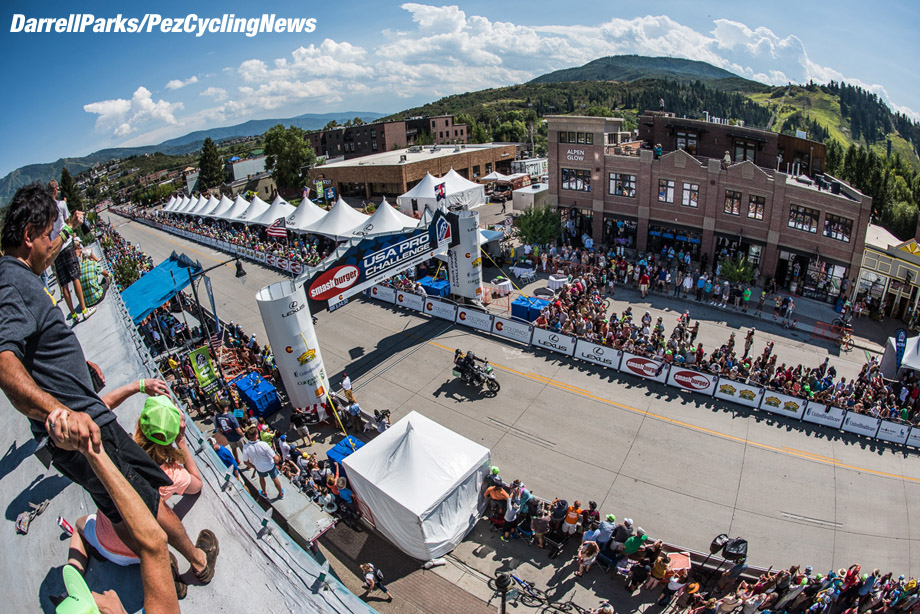 My Rooftop view of Steamboat Springs. Leave your fear of heights at home!

I made my way to the front of the rooftop and it was already lined with fans looking to catch a bird’s eye view of the finish. I must have looked as disappointed as I felt as one of the women offered up her prime viewing spot at the far end of the roof without me even asking. She joked that I could surely take better pictures with my big cameras than she could with her iphone! I certainly was quite pleased with my capture of Taylor Phinney taking his first win after his return from injury. 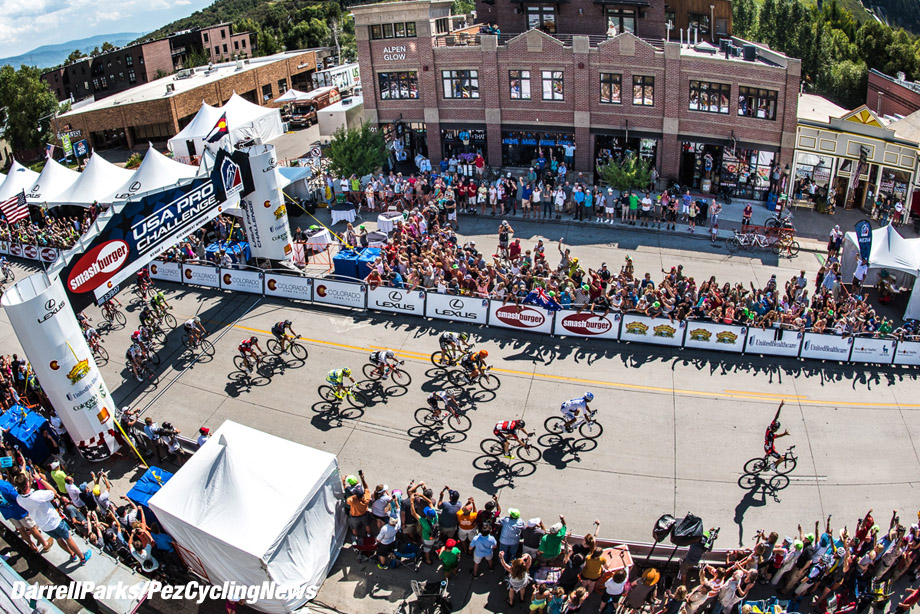 The view from above as Taylor Phinney takes Stage one

Lately I’ve had the privilege of shooting many races from the back of a motorcycle. A race will typically have 8 to 10 motorcycles and trained drivers dedicated to supporting photographers. They can take you ahead of the race to shoot a scenic image as the race goes by. Then they can catch up to the race again and repeatedly go around the Peloton. However, depending on the dynamics of the race, and the size of the road you’re on, you might get stuck behind the race for a while. 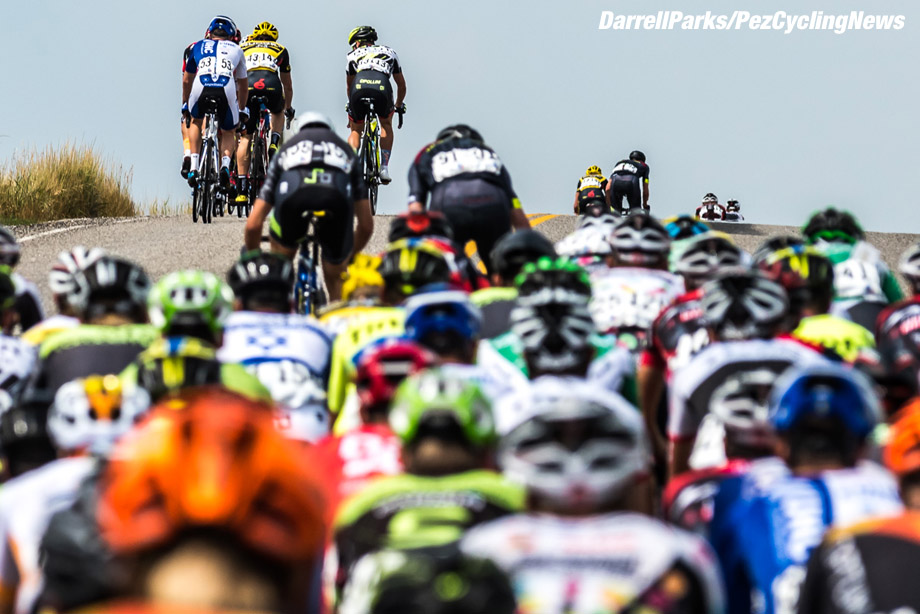 Riders attack off the front trying to form a breakaway. Stuck behind the race, a small hill allowed me to get the vantage point I needed to get the shot.

This usually happens for safety reasons. For instance, you can often find yourself stuck behind the race near the beginning of the stage. The riders can be all over the road as attacks are fast and furious as the break tries to form. The dynamics of this can be very dangerous if you throw a passing motorcycle into the mix. The race commissaire travels just behind the riders and has control of who can pass the riders and when. You must ask their permission if you want to pass the riders. They then do an assessment of the race and determine if it is safe to allow you to make a pass. 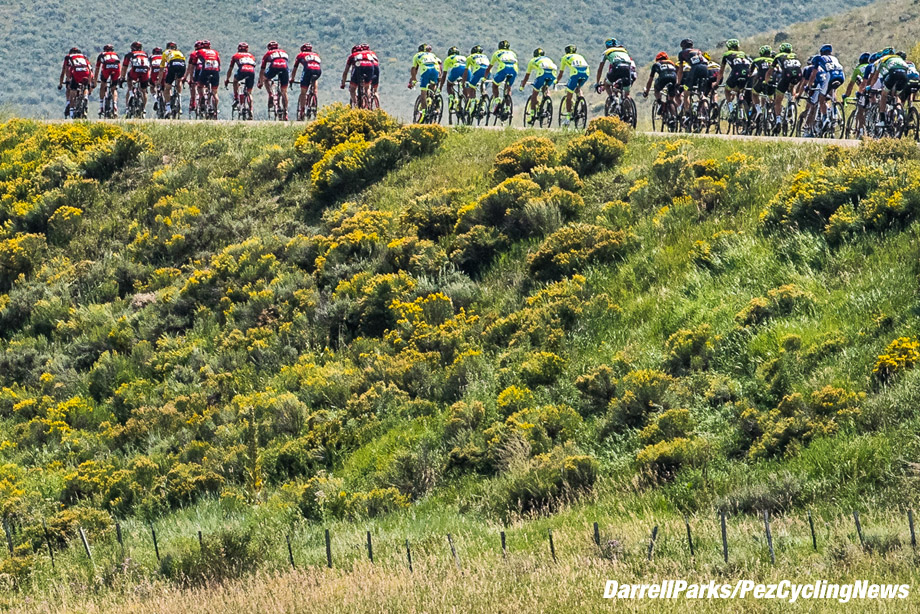 Stuck behind the peloton again. I waited for a clearing and captured this image as the road took a turn to the left ahead of me.

Another reason for getting stuck behind is when team cars are being called up to assist their riders. Sometimes this happens on a road that’s barely wide enough for 2 vehicles, let alone 2 cars and a rider getting water bottles alongside of one of the cars. It can be very dangerous even without other vehicles in amongst them. Passing is also discouraged on narrow descents and extremely rough or gravel roads. 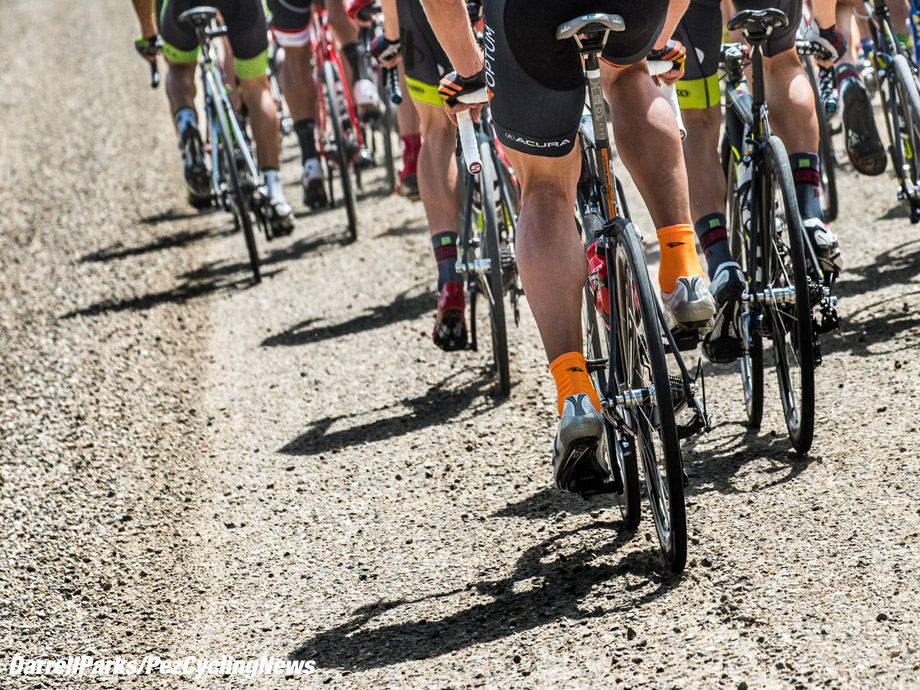 Passing in the gravel section was not allowed on Stage 2. Stuck again!

Stage 4 took us through some long, straight, wide open roads. With nothing to block the heavy side winds, our motorcycle was being pushed all over the road. I knew the conditions were ideal for the formation of echelons within the race. We forged ahead of the race in search of a hill near the side of the road. I would need to get a high vantage point to capture the gaps in the peloton being caused by the wind. We found one and sure enough, the echelons were forming! 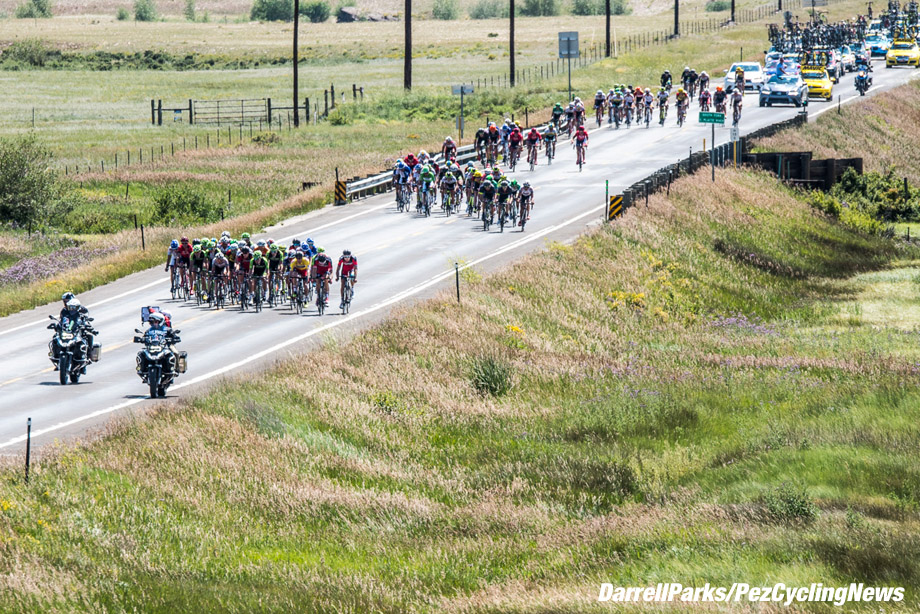 It’s always fun to attempt to get the race helicopter in the shot. It can be a real challenge at times, then just plain fly into your shot other times. It can really add a sense of action to an image. I managed to get quite a few interesting shots of the chopper in Colorado. 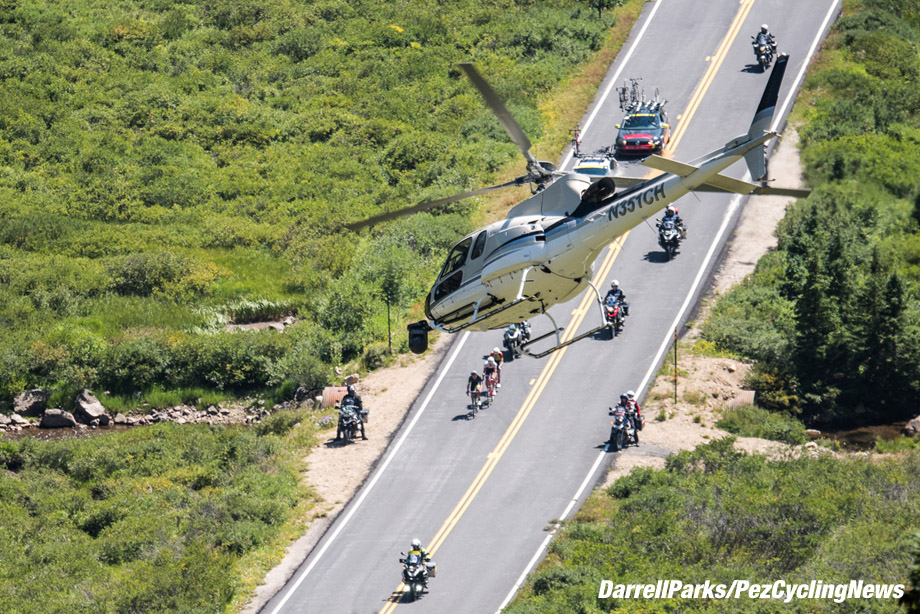 The helicopter dives towards the break on Stage 3. I was able to get the higher vantage point from above on the road to independence pass. 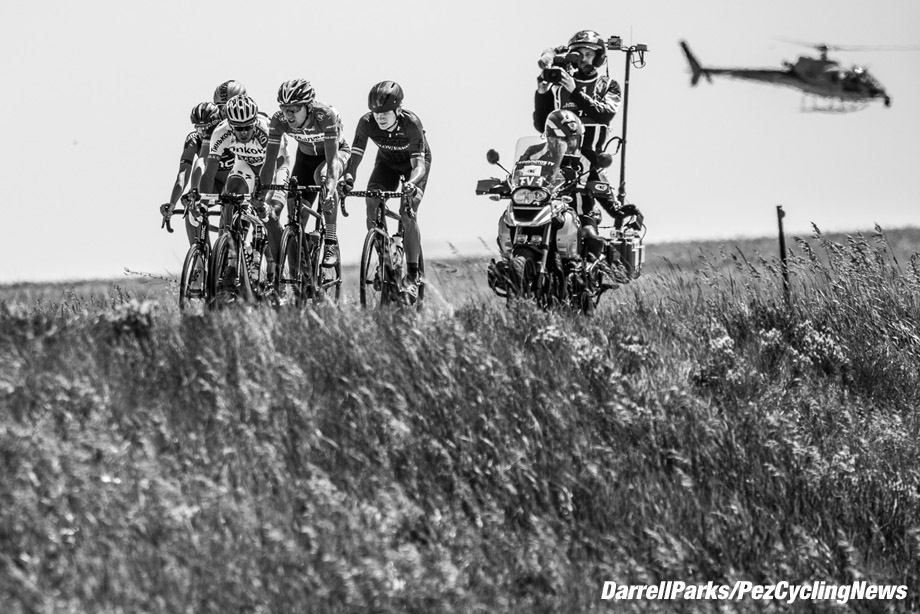 The break battles the cross winds while being chased by the TV moto and the helicopter on Stage 4. 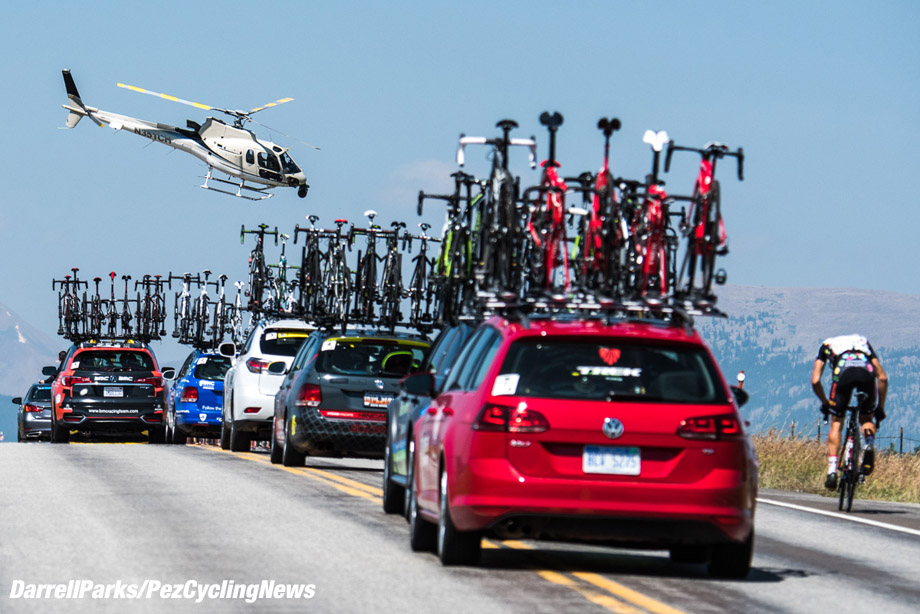 The helicopter circles the team cars on Stage 4. 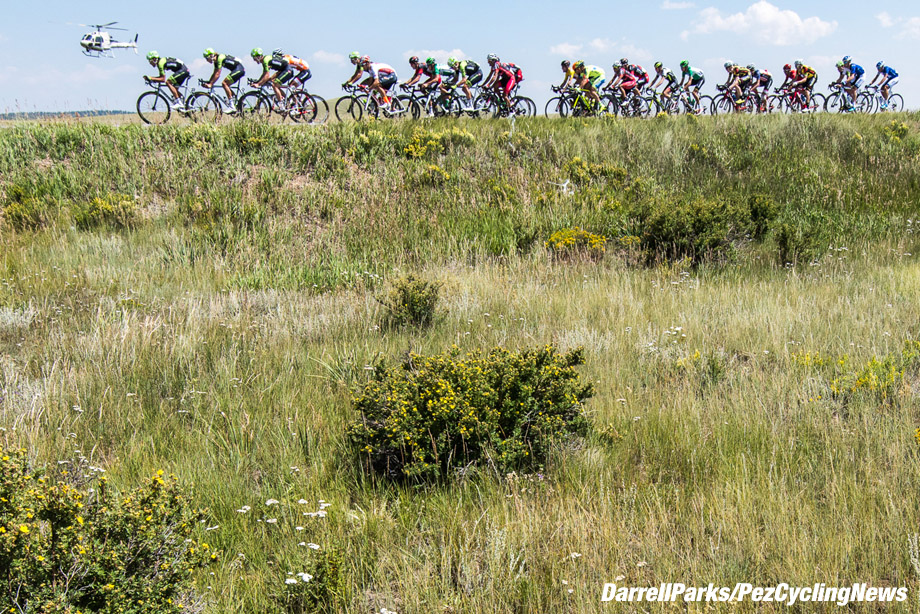 The helicopter leads out the peloton on Stage 4.

I shot stage 6 from the rental car as two of the photo motorcycles had been pulled to support the women’s race. While driving the race route ahead of the race I came upon a large field of yellow flowers. I pulled over just passed the flowers and went into the field to take a look. Unfortunately the flowers were about 7 feet tall and I couldn’t see the road from behind the flowers. I then found a dirt path just beyond the field where I was able to back the rental car down and into position about 50 feet from the road. I was then able to climb on the roof of the car to get a perfect vantage point. 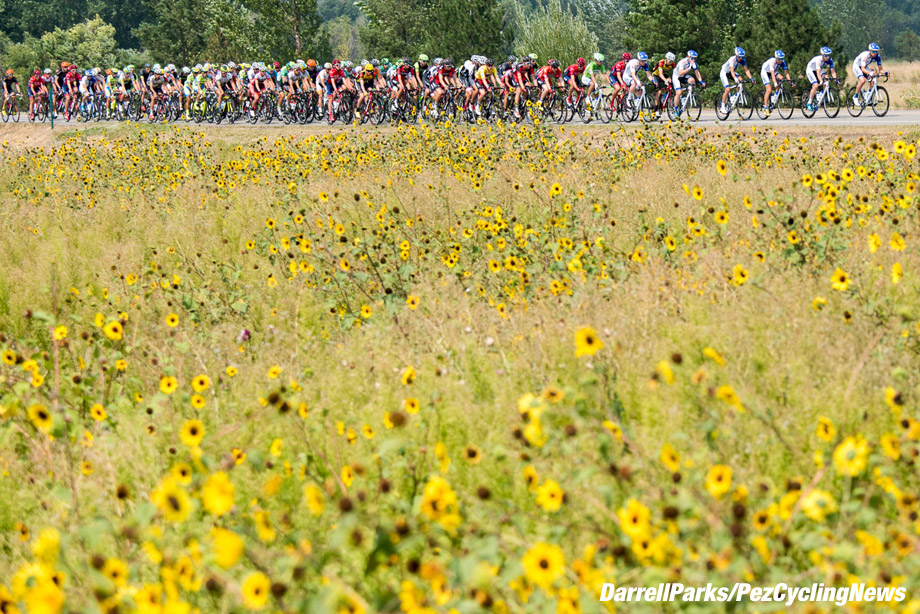 Taken across the flowers while standing on the roof of the rental car.

The final stage took the riders up Lookout Mountain. This road was packed with fans and a multitude of twists and turns. Here I used my Fisheye lens to accentuate the curves and give the viewer birds eye view of the riders. Oh, and there’s that pesky helicopter again! 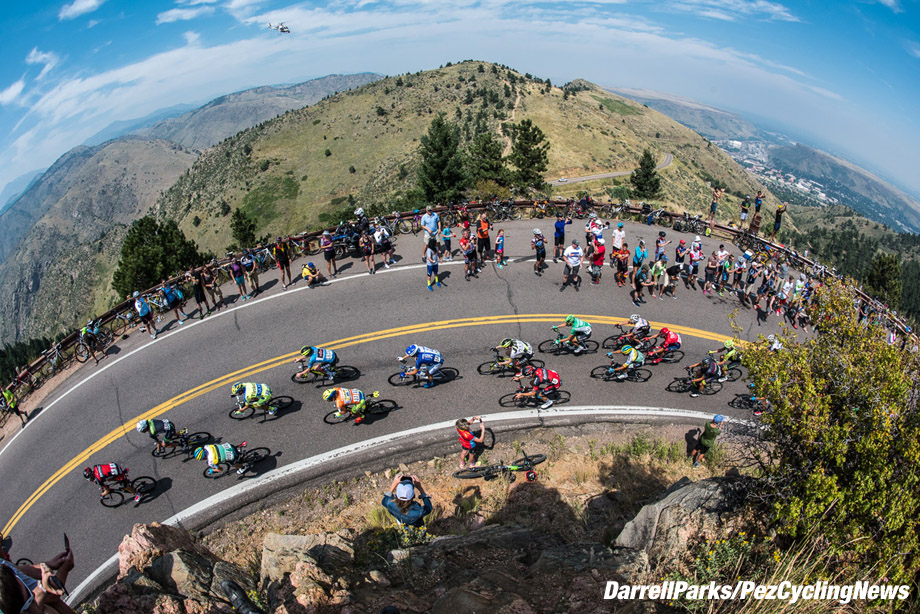 Thanks for reading and I’m looking forward to seeing all the fans on the road at next year’s USA Pro Cycling Challenge! The crowds in Denver were amazing! 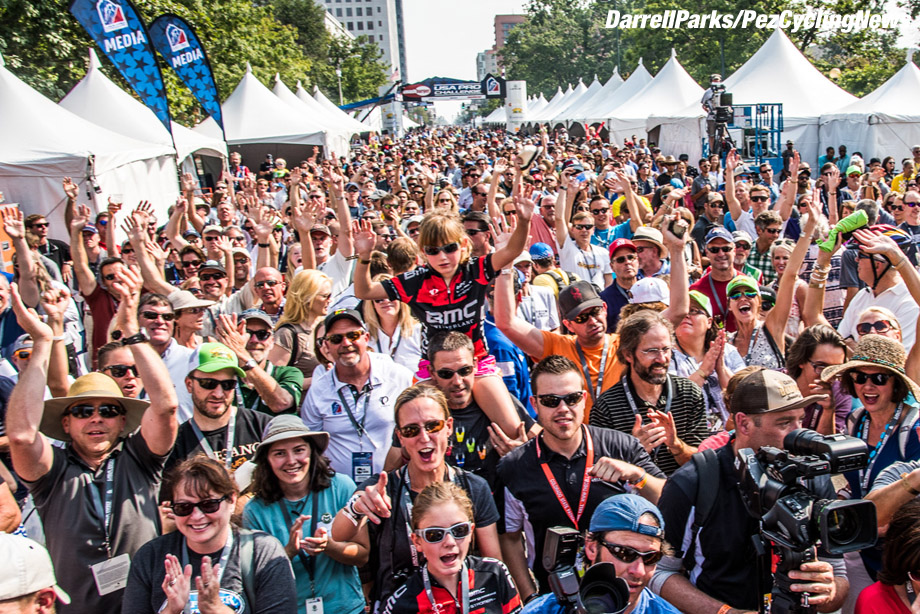 RPM: The Brand that is Revolutionizing Style