The Postal Years: A Look Back

Whatever you think of them today, the US Postal team of 1996 – 2004 changed our sport forever. Today we take a look back at some of the images and moments that shaped those times and the development of a team that went from a small American outfit in ’96 to the all conquering International Tour de France teams of ’99 – ’04. 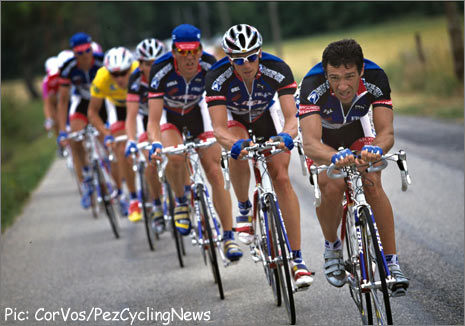 The team may have started in 1996 but it was in 1997 when Viatcheslav Ekimov and a host of European stars joined the team that US Postal came of age in Europe. Ekimov took the team’s biggest wins that year taking stages in both Paris-Nice and the Dauphinй Liberй. 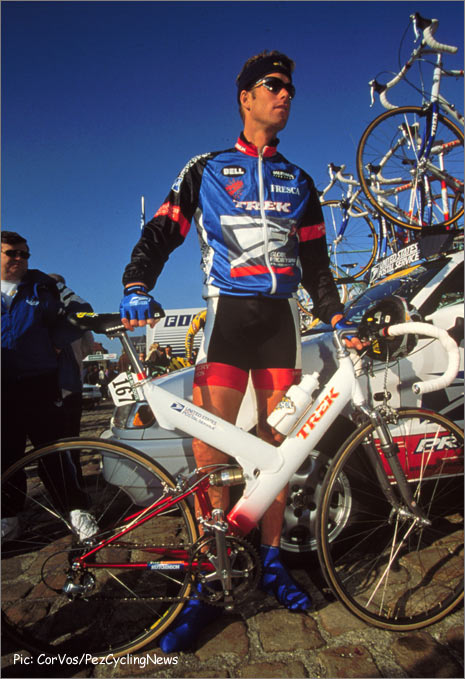 Also in the team in 1997 was Scott Mercier who was happy to try experimental bikes that year but not drugs. Scott left the team with his head held high and integrity intact at the end of the season but bitterly disappointed about what professional cycling had become. 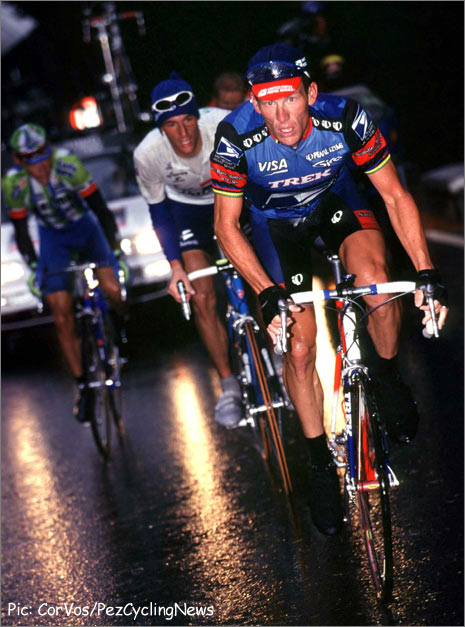 The 1998 Vuelta Espana was when it all changed for Lance Armstrong and the US Postal team with Lance claiming 4th overall. His transformation from one day champion, to cancer patient, to cancer survivor, to Tour champion was almost complete. 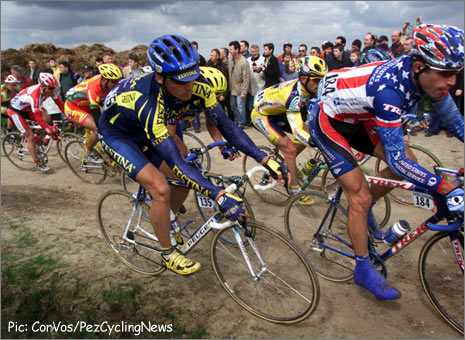 In 1999 George Hincapie showed his potential in the Classics finishing 9th in Milan-San Remo, 21st in Flanders, 4th in Gent-Wevelgem and 4th in Paris-Roubaix. 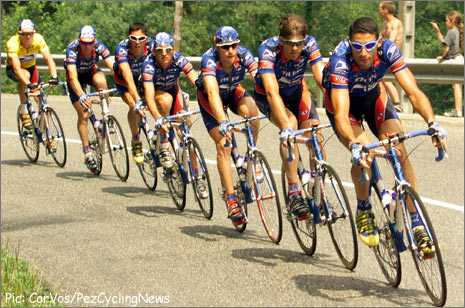 The US Postal team of ’99 was inexperienced in defending a leader’s jersey but they gave their all for Lance, escorting him to Paris and his first Tour win ahead of Alex Zulle and Fernando Escartin. 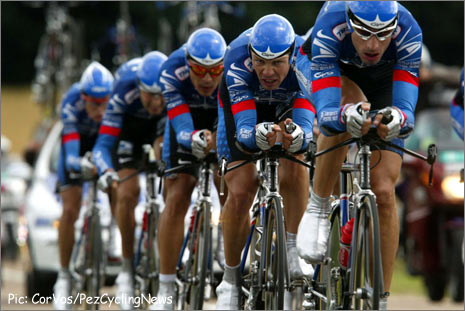 By the time the 2002 Tour de France came around the Postal team were an all dominating machine pushing Lance to another overall victory, this time by an amazing 7m17s over Joseba Beloki and 8m18s ahead of Raimondas Rumsas. 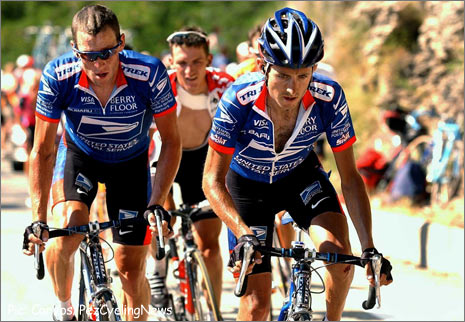 Roberto Heras was brought onto the team in 2001 and quickly became Lance’s last man standing as the races hit the mountains. 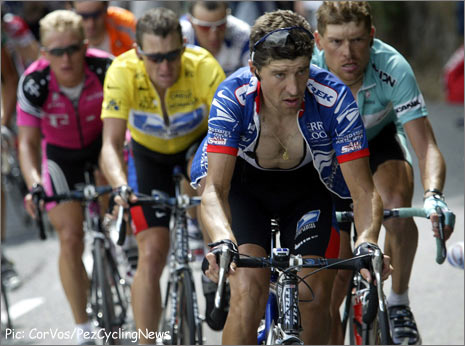 Chechu Rubiera was another Spaniard brought into the team in 2001 and was a loyal domestique to Lance, staying with him throughout his career at Postal/Discovery and even during his comeback years at Astana and RadioShack. Here he’s seen leading a host of riders with checkered pasts in the ’03 Tour, Ullrich, Lance, Vinokourov, Basso, Mayo…. 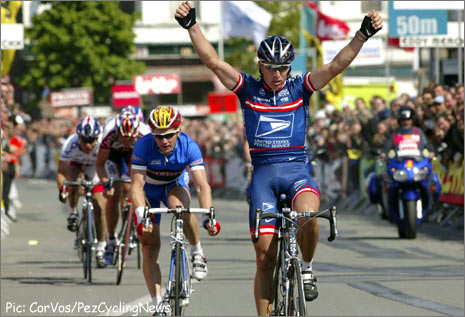 Not just a GC team, US Postal also hired riders like Max Van Heeswijk to get them results in the Classics. Come July though, there was no room in the team for Max with everything based on getting Lance another yellow jersey in Paris. 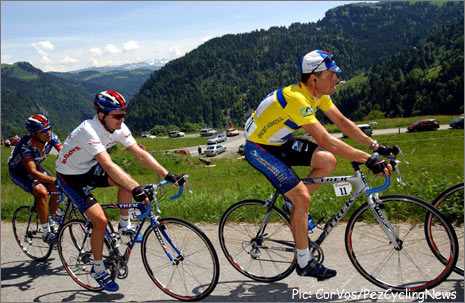 In 2002 a young Floyd Landis signed with US Postal and quickly impressed with 2nd place in the Dauphinй Liberй behind team boss, Lance. 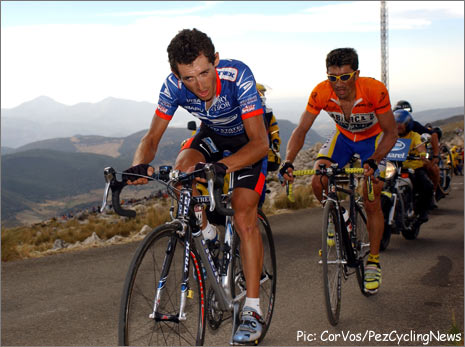 Roberto Heras was not just a loyal domestique at Postal, he was also the outright team leader in the Vuelta and in 2003 he won the overall. He then left Postal to go to Liberty Seguros winning the Vuelta again in ’04 and ’05 before being caught for EPO during that year’s race and being stripped of the result. 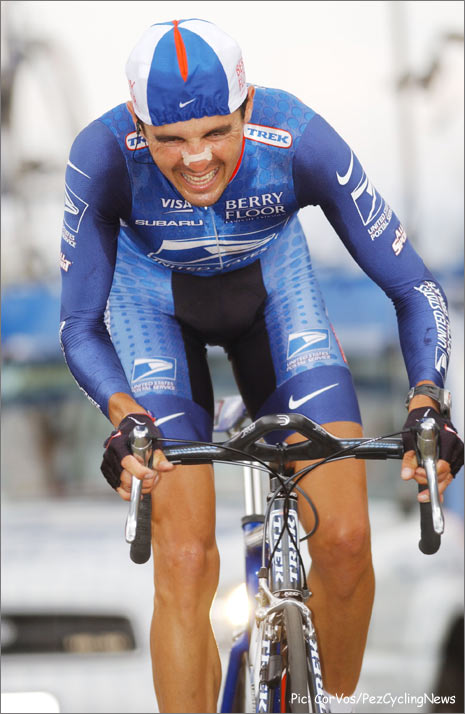 Manuel ‘Triki’ Beltran was just another Postal domestique who tested positive for drugs after leaving US Postal. Triki was done for EPO use in the 2008 Tour de France whilst riding for Liquigas. 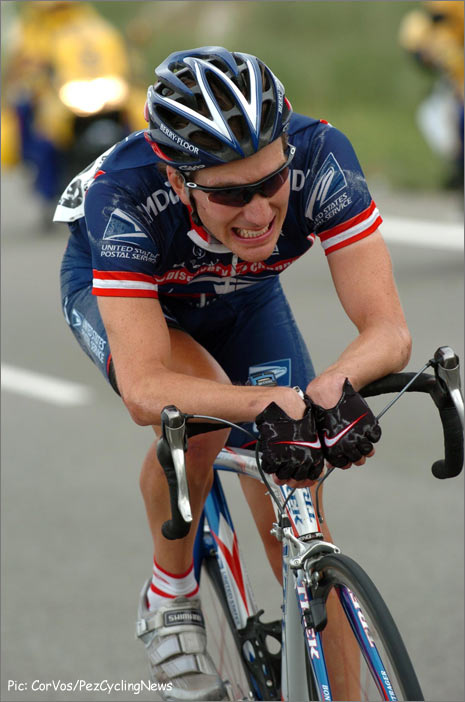 Dave Zabriskie joined the team in 2001 and soon became an essential part of the Postal train. In 2004 at the Vuelta in Stage 11 he left the peloton 3km into the stage and soloed his way to the win some 162km later! This result is a part of Dave’s palmares that has been voided by the USADA concerning the period 13th May 2003 – 31st July 2006. 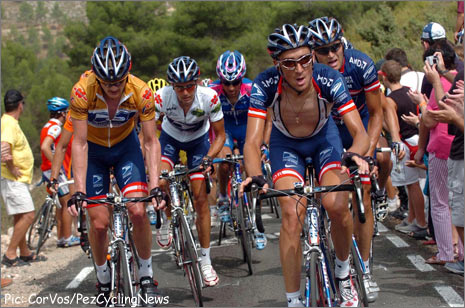 Also in the ’04 Vuelta was the moment where Floyd Landis started looking like a potential GrandTour winner, leading the race for 5 days. It was to be one of Floyd’s last races in Postal colors as he left for Phonak at the end of the season. 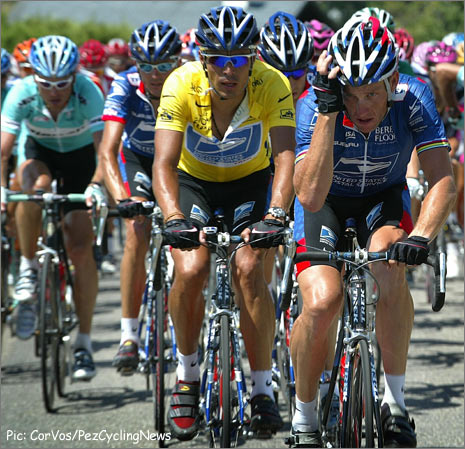 No, Lance isn’t working for Vicor Hugo Pena here in Le Tour ’03… Pena was 1 second better than his team boss in the prologue and inherited the yellow jersey on Stage 4 before Lance took over. 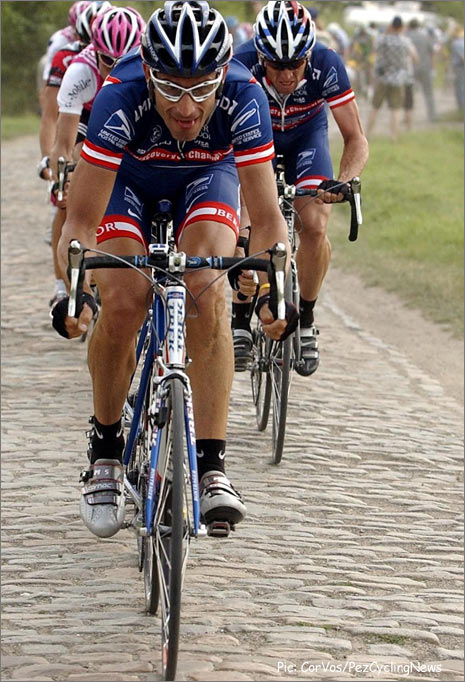 George Hincapie was Lance’s loyal teammate throughout his Tour de France domination and was especially to the fore when the going got tough – like here on the cobbles in the ’04 Tour. 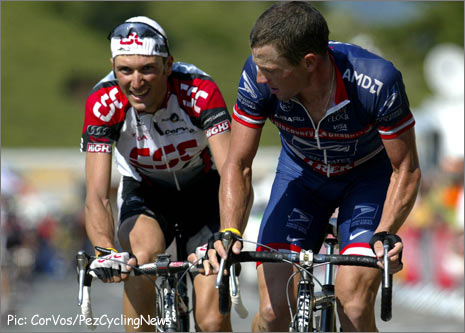 The battle on La Mongie in the ’04 Tour put paid to Ullrich & Hamilton’s chances and Armstrong was happy to let Ivan Basso take the win. 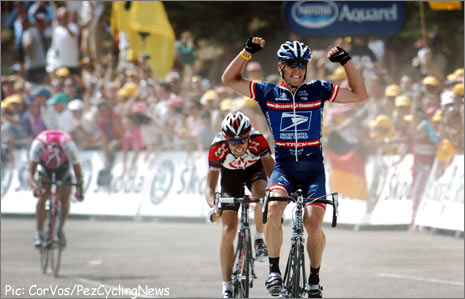 Three days later in Villard de Lans, Lance was in no mood for gifts sprinting to an emotional victory and ever closer to another Tour win. 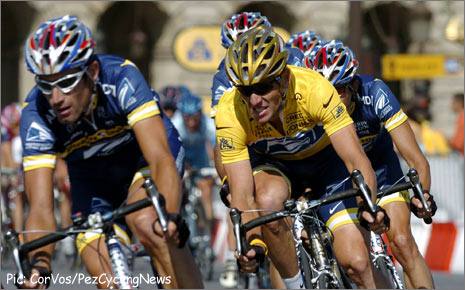 The last Tour de France in Postal colors in ’04 saw the team adopt a change of uniform as they headed into Paris.

So there you have it. A brief history in photos of the Postal team but there’s so much more to tell of this story. With many of their results now wiped from the record books, how will the team be remembered in the future by fans, non-cycling public and the riders alike?

The team certainly happened, they existed and they dominated and I think even if the Tour victories no longer exist in the record books there’s no point trying to deny that all those battles out there on the roads didn’t take place. In the minds of the fans, opponents and riders themselves who were there and lived through it, the memories are still fresh.

Perhaps you love the US Postal team or maybe you hate them or perhaps you even loved them then but now you hate them! Whatever the case I think I can speak for everybody on any side of the fence on this one when I say that I sincerely hope that the sport can move on and learn from everything we now know that occurred during the Postal years.