By Gordan Cameron On Oct 12, 2014
Share
Like PEZ? Why not subscribe to our weekly newsletter to receive updates and reminders on what's cool in road cycling?

The third Taiwan KOM Challenge is on the 15th of November, 2014 and as PEZ reporter Gordan Cameron found out last year; it is one amazing race. The KOM Challenge is the high point of the Taiwan government-supported ‘Taiwan Cycling Festival’ and is a true high mountain challenge. It’s brutal, but has a beauty all of its own.

It’s a challenge unlike any other. There may be races to higher altitudes, but for eye-watering gradients and morale-sapping length the Taiwan KOM Challenge trumps them all. World Tour riders have come here and had meltdowns – 87 kilometers of climbing can do that to you!

It’s dark when the riders leave the hotel, lights attached. There are two reasons for the 4.45am roll-call: firstly, with such an event, it’s vital to secure all the police and municipal permissions for the road closures, etc. 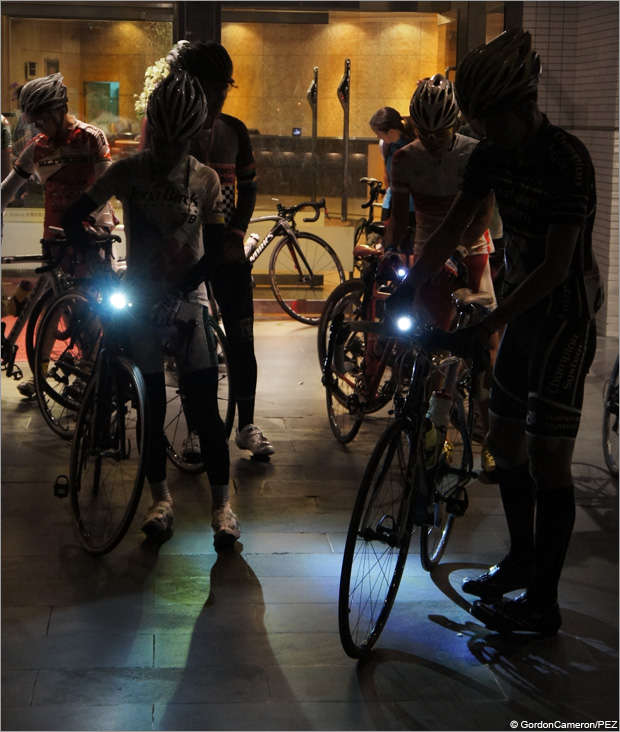 Secondly, the weather at Mt Wu Ling’s summit can be very changeable, especially after midday. Better to get the riders up, then get them off quickly. When the rain comes, it arrives like a marching band inside your head, not a gentle refreshment. For those putting their bodies and soul on the line in the battle with altitude and gradient, there are support vans. I’m a weakling, I’m in a press car.

It’s a much nicer atmosphere than a lot of sportifs I’ve done elsewhere – there seems to be real camaraderie, lots of smiles. Lots of handshakes. Lots of laughter ahead of such a monster climb. 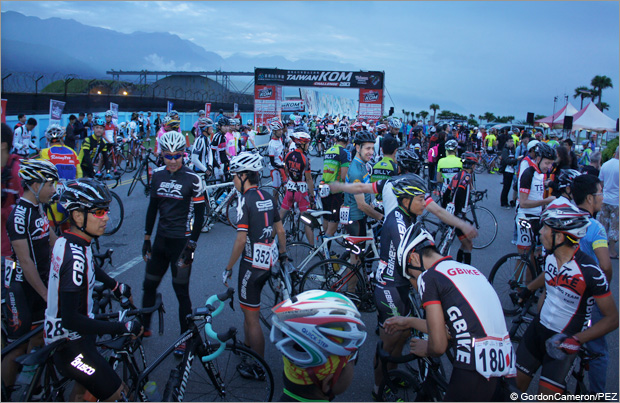 Dawn puts fingertips on the window ledge of day, peers in, sees the coast is clear, and climbs stealthily in. The sky brightens quickly from about 5.45am, and the start ceremony gets going.

A huge drum sits centre-stage, and we place bets on which invited rider will have to channel John Bonham this early in the morning. The answer is better than expected. A Taroko tribesman takes to the stage as another whirls in a frenzied dance in front of us. 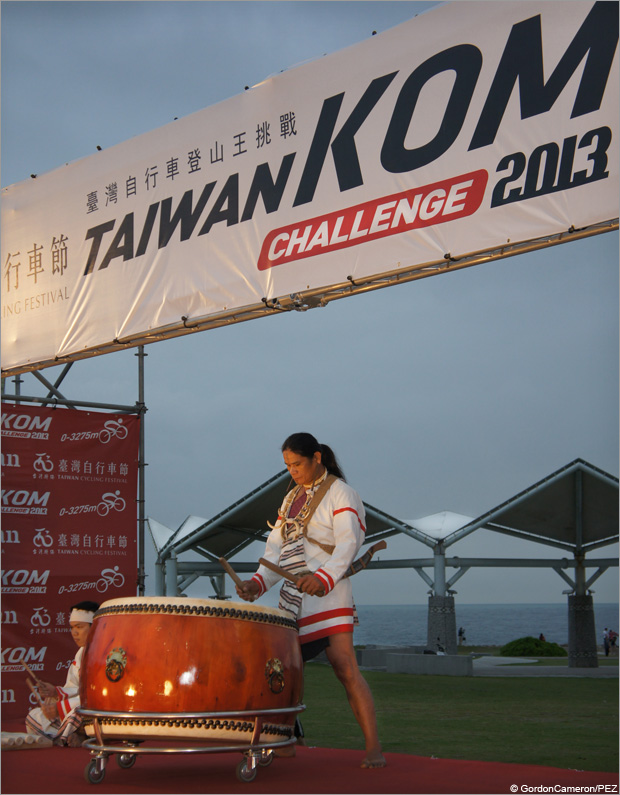 There are 14 indigenous tribes in Taiwan, of which the Taroko are one – they give their name to the phenomenal region the riders will race through in the KOM Challenge. Sadly, their numbers are at around 20,000 – not enough for a proud culture. 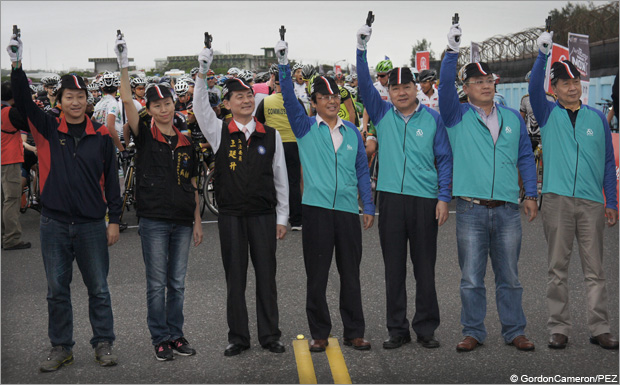 I’m sure there’s a sit-com storyline waiting to be developed at the departure area; a tray of starting pistols. How many starters does it take to get a race going? Seven would appear to be the lucky number.

We dive into the press car as the riders pass; they go left and we go right, heading them off to enter Taroko National Park first. 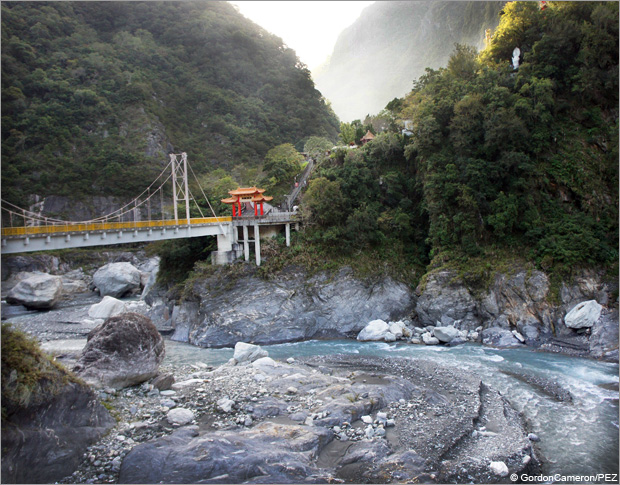 The road immediately pitches up as we drive towards the Xipan Tunnel, past the Swallow Gorge and over Ci Mu Bridge where we have a photo stop. This section of the mountain is not yet bathed in sunlight, but the engineering that’s gone into the building of this infrastructure makes we want to bundle our planners back home onto a plane to come and see how it’s done.

There are four water stops and three food stations for this 105 kilometer ride – that should tell you something! The first liquid refreshments come at kilometer 46 in Xibao. 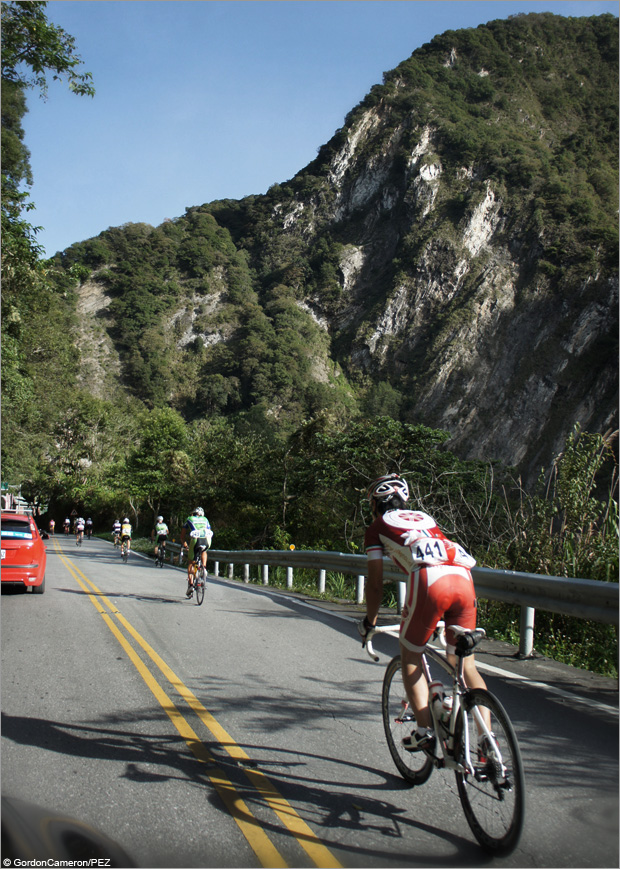 The field of 400 (28 different nations) that started together, that rolled the first 18-kilometer neutral zone together, is already in bits. A big group ploughs away at the front but it’s already carnage behind. This might not be the most famous race in cycling, but it’s got a stack of talent from the Asian scene. It is becoming a big deal. 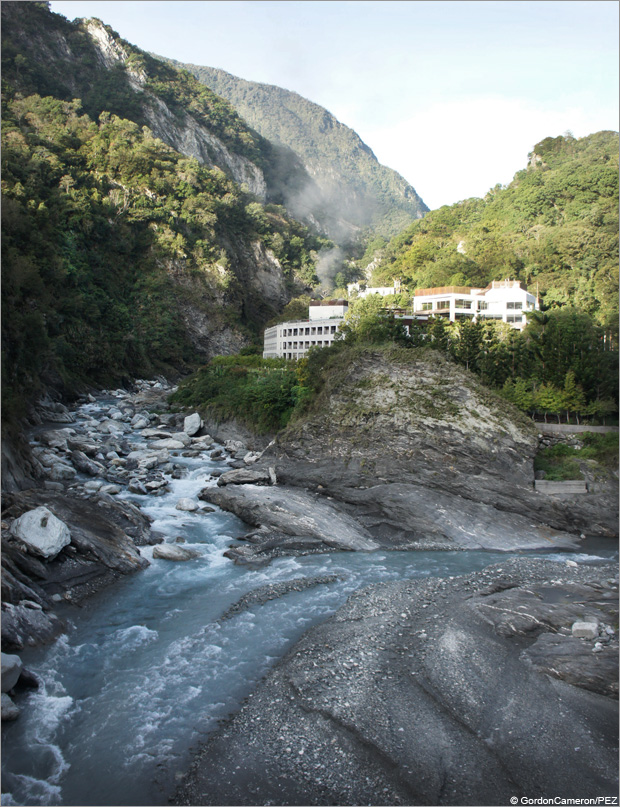 The scenery is sensational, trees clothe the hillsides all the way to the summit. Marble boulders off-set crystal clear mountain streams way below. It’s a scale you can’t get your head around – hills upon hills, mountains folded on top of mountains. You’re in another dimension, lost as to how high up you are. 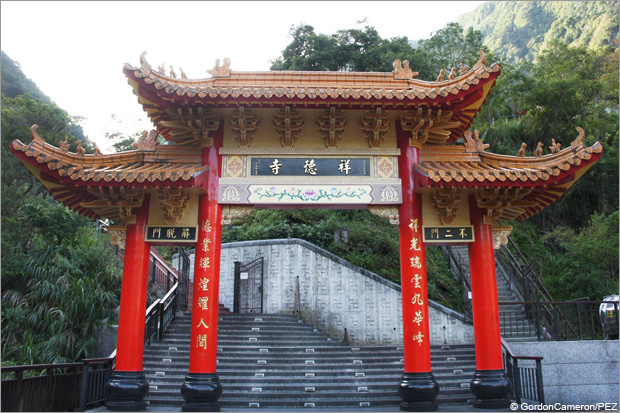 I have a brief chat with a Thailand-based Brit, who finds Taiwan overwhelmingly over-organised and regimented. “Everything’s too real here,” he says. I look at the red painted gate to a hilltop shrine – maybe he’s right, but I like it here. 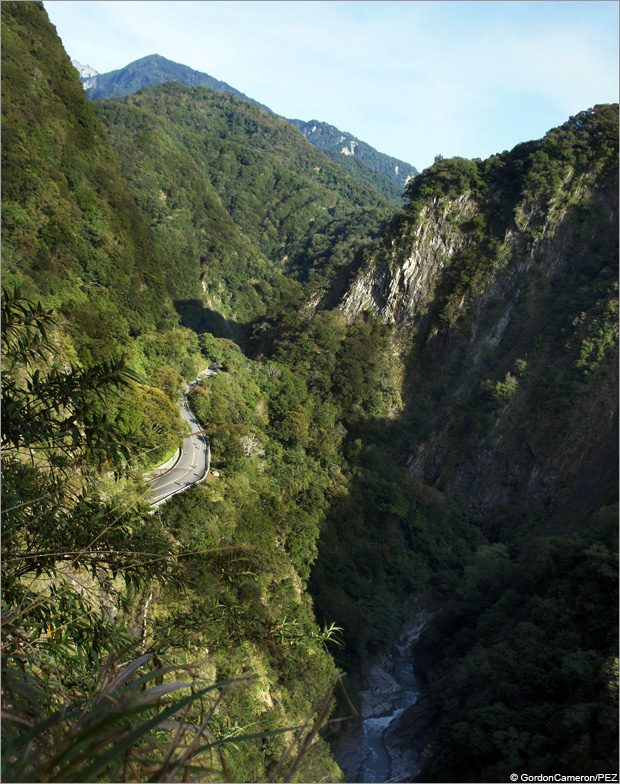 More tunnels come and go, the Ci Yun bridge is another beauty, and the scenery continues to dazzle. Riders steam past on the unforgiving slopes. It seems quick today. Last year’s record time was 3 hours 37 minutes, which could be threatened. I’ve taken the view of where we’ve come from not three minutes ago before I realise it was a death-wish in waiting. I teeter nervously back to the car. 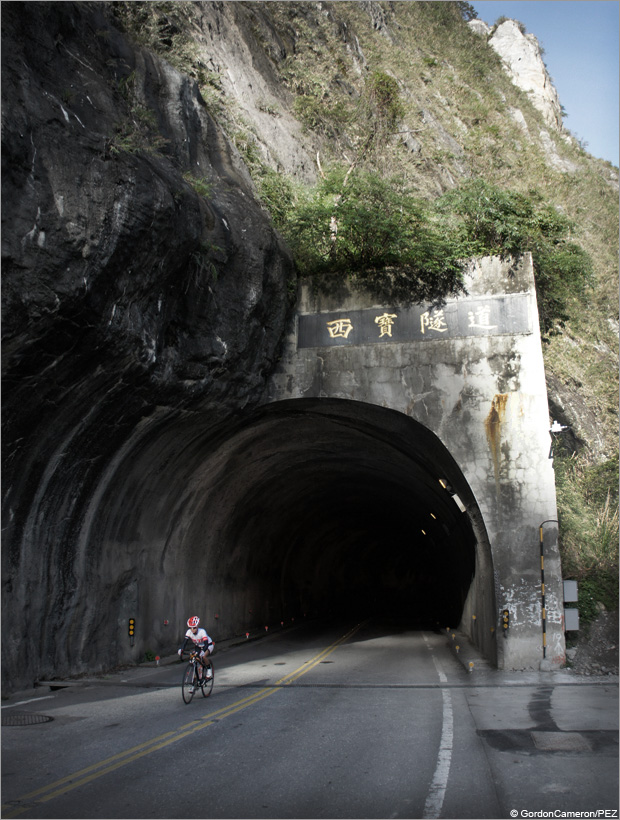 Sunlight spears through the trees now, picks out riders in varying states of success in battling the road. There are some real talents here: John Ebsen who won in 2012; the Iranians from RTS Santic; the Atlas-Enervit boys from Italy. 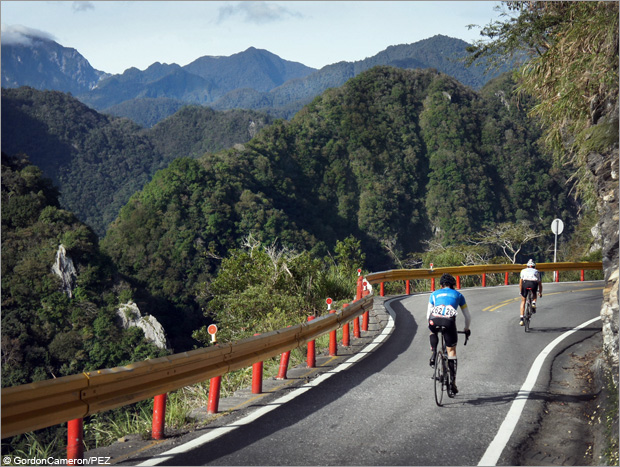 There are certain turns in the road where you duck under rock outcrops, into deep tree cover, and other times the scene just opens out in front of you. The road surface is, mostly, perfect, just a few rough areas near some quarries. 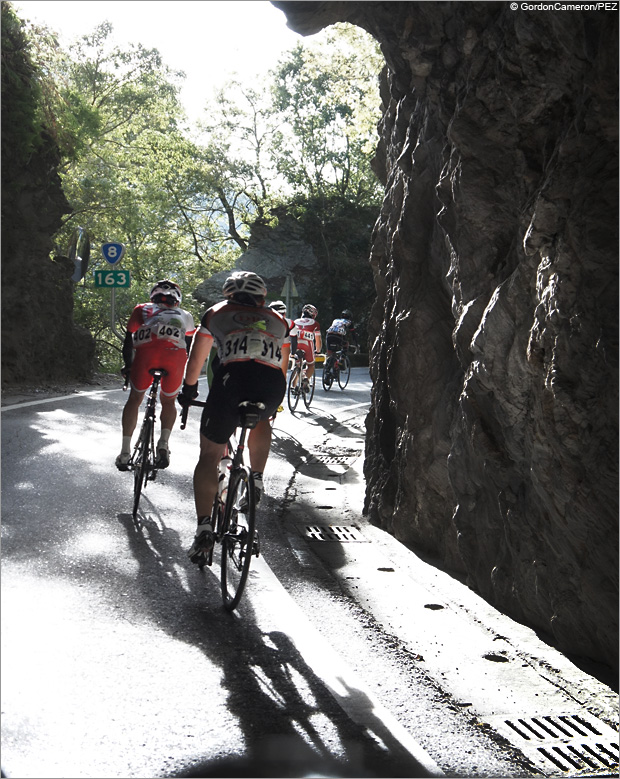 Our driver picks past the riders with perfect timing, holding back carefully when the road narrows, then gunning through the gaps. The convoy of race vehicles concertinas together as we hit another steepling section of road. 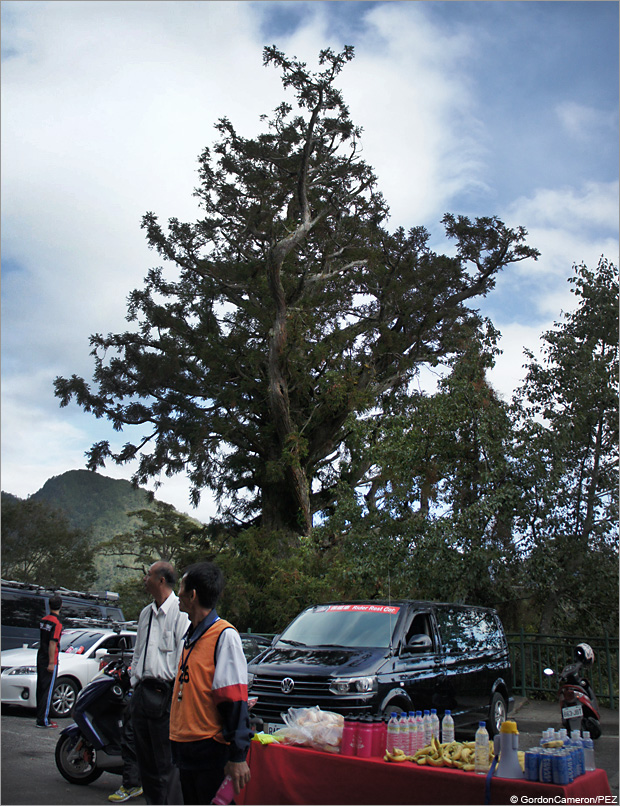 Through the Henshan Tunnel, past the Xinbaiyang feed zone, through Ci En, and round a nasty hairpin to see the Bilu Holy tree. A Lunta Fir, it’s around 3,200 years old and a commanding 50 meters tall. It’s seen plenty of battles in it’s time, albeit a less bloody one on the bikes … 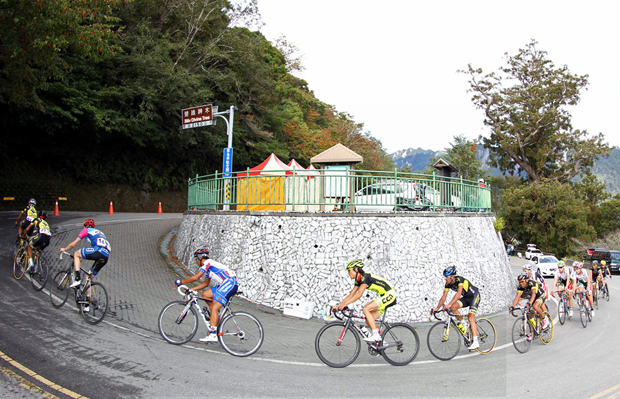 There’s a sharp, fairly technical descent after the Bilu Tunnel before the road pitches back up again past the Guanyuan Gas Station. We’re picking off riders now: a group of eighteen is chasing a group of about ten. As we reach the leaders it all goes haywire – attacks fire off. My room-mate Yin Chih is in the thick of it, so I keep an eye out for his luminous yellow CCN jersey. 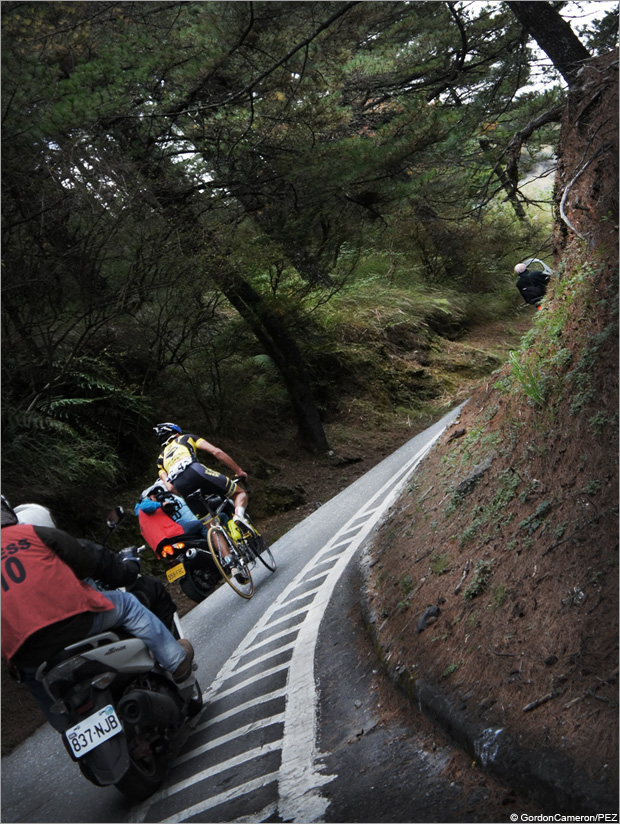 At 2738 meters high, the route profile registers what’s basically a vertical line: this is where the RTS Santic boys give it the stick. Emami and Zargari rip away on the hardest part of the course. The hairpins briefly make you feel like you’re in a rollercoaster reaching the top of a climb before plunging in terror … only here the rollercoaster just keeps grinding upwards.

The last eight kilometers are an average of 17%, with a short pitch at 27%. It’s incredible that our driver gets his automatic up there; ahead, black fumes belch from less healthy vehicles. The air burns with the externalised agonies of engines as they basically drive up a wall. Your nostrils get scorched. 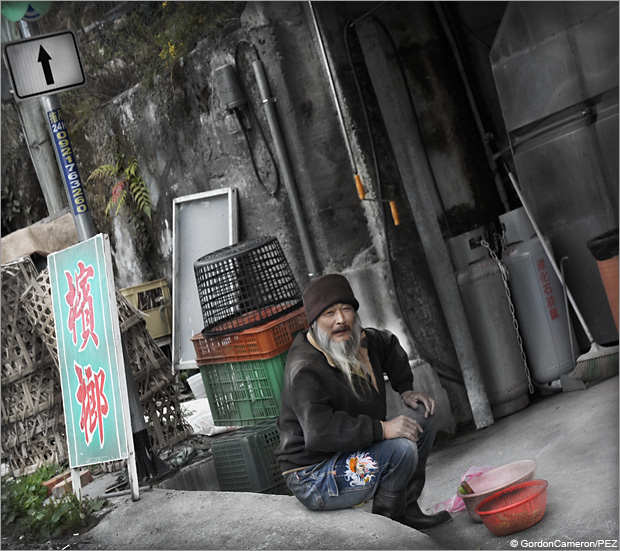 The characters at the roadside appear more frequently as we get closer; a watermelon seller darts out of her stall to snap pictures with a smartphone before returning to her fruit. 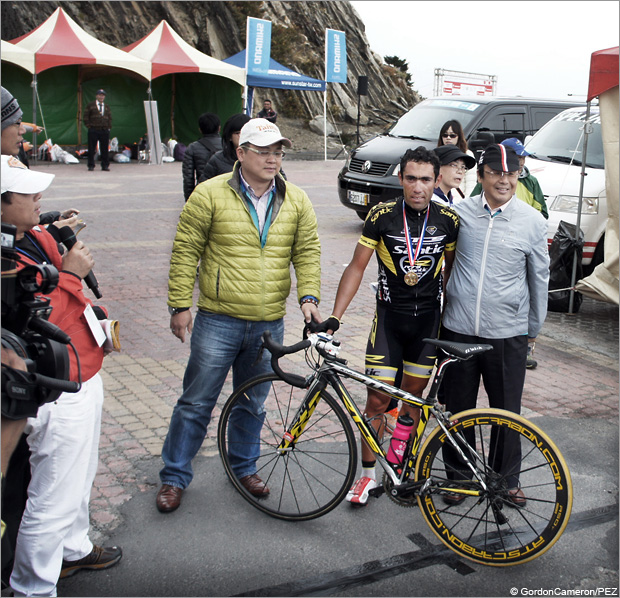 I dive out of the car at the finish as anticipation builds. The summit wears a light grey wreath of mist as RTS Santic’s Iranian duo Rahim Emami and Amir Zagari come home one and two. It’s a super-quick 3hrs 26′ 59” for the winner.

There’s a massive cheer as Yin Chih is first Taiwanese home in third – a brilliant ride. I’m having a bit of trouble breathing as I try to jog my way across the road to get a better photo spot. Only then does the reality hit me; at this altitude, there’s a reason that car engines have trouble. 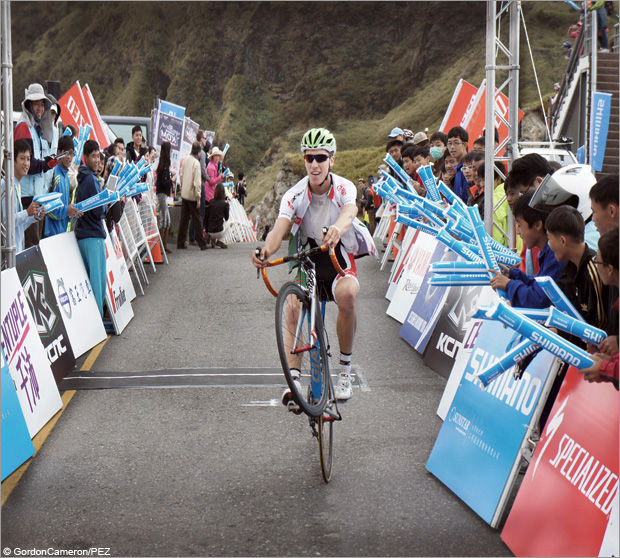 Filosi Iuri from Italy is in fourth and pops a casual Robbie McEwen-style wheelie as he summits, earning him instant fame with the fans.

The spectators crowd around the riders: the USA’s hill climbing expert Cameron Cogburn (home in fifth) is besieged, but comes away with the friendliness award for his easy-going manner. His buddy Sean Smith got the combativity prize. 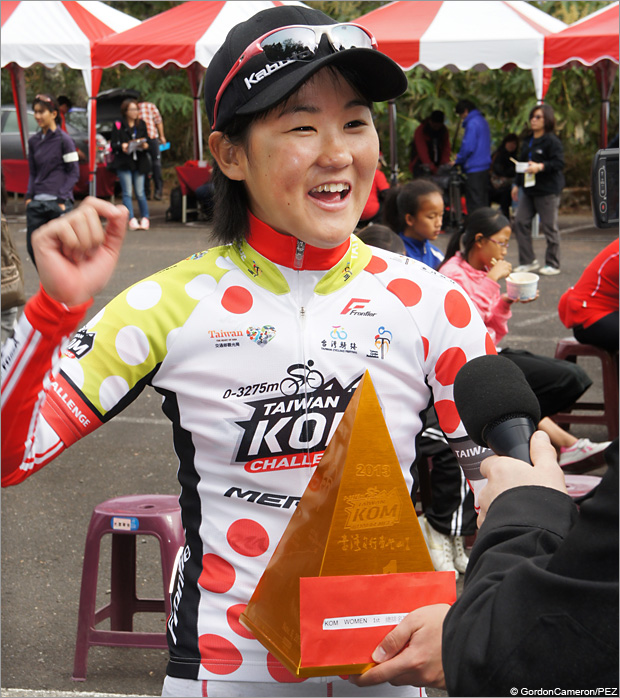 It’s no surprise that Japan’s Eri Yonamine wins the women’s prize, with Tiffany Cromwell in second doing a fine ride in what is her off-season. 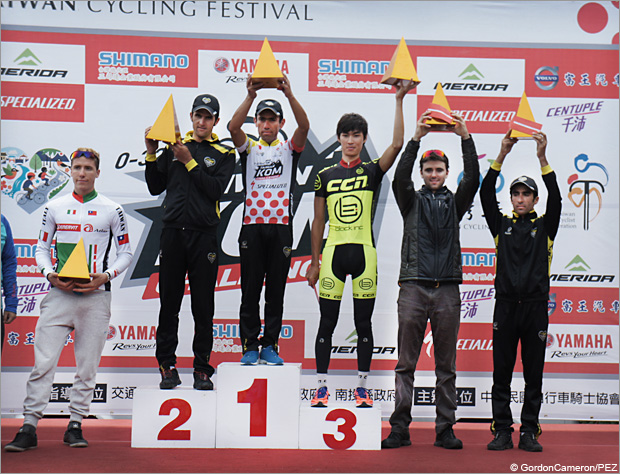 There’s a brief presentation for the men at the top before we bus it halfway down for a more elaborate celebration. 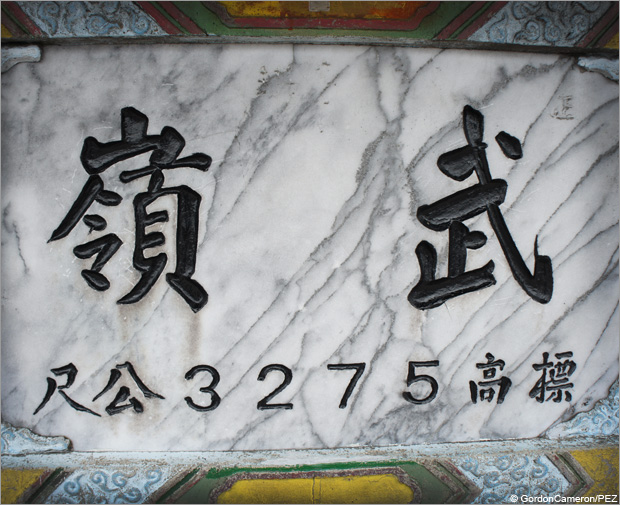 It’s a hell of a challenge, and in such a climate with good hotels and connections nearby, this is a road well worth taking on.

Thanks to the Taiwan Tourist Bureau and the Taiwan Cyclist Federation, especially Gary and David Shu, for making Gordan’s trip happen.