US troops who are die hard cyclists and big time pro cycling fans serving in Afghanistan have a hard time getting any miles or pro race coverage. (…duh!) But one committed cyclist, Master Sergeant Pat Gleason, is finding ways to get his cycling fix. His wife Jill wrote to The Tour Baby! filmmaker Scott Coady to order a copy of the film for her cycling starved husband. In honor of Master Sergeant Gleason’s service, Scott sent the soldier a free film and the soldier returned this photo of himself and the men of his mortar platoon, 3/116th Infantry Division, stationed in Ghazni, Afghanistan holding the prized film.

Actual de-classified photo of US troops of the 3/116th Infantry displaying prized The Tour Baby! dvd.

The Sergeant Gleason wrote that they are even managing to get some training in on an old stationary bike they have cobbled together.

The Tour Baby! premiered in Boulder, Colorado in February 2004 at a LAF benefit hosted by Davis Phinney. The audience of 900 plus ultra sophisticated cyclist from this Mecca of cycling laughed and cheered non-stop and audiences around the world have been laughing and cheering ever since. 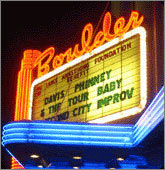 Check out that marquis – The Tour Baby! is ON tour, baby!

Dates and locations are soon to be announced for the following cities/countries:

A PEZ-WORTHY CAUSE
Scott Coady has raised over $75,000 toward his pledge of raising $100,000 for the Lance Armstrong Foundation through screenings and sales of The Tour Baby! So now you can help a great cause, and get a cool slice of TDF life like it’s never been presented before.

Get more info on the video, and order your copy at the website:

Read the PEZ-review of the movie here.