With Alessandro Petacchi’s surprise announcement yesterday of his retirement what better time to look back at the career of one of the sport’s most victorious riders of the last 15 years with some of the best photos from the archives.

Alessandro started out in the pro ranks with the small Scrigno-Blue Storm team but it wasn’t until he linked up with Giancarlo Ferretti’s Fasso Bortolo team where the world really sat up and took notice of the tall Italian from La Spezia. Five years at the Italian super sqaud saw Petacchi rack up victories all over the world. 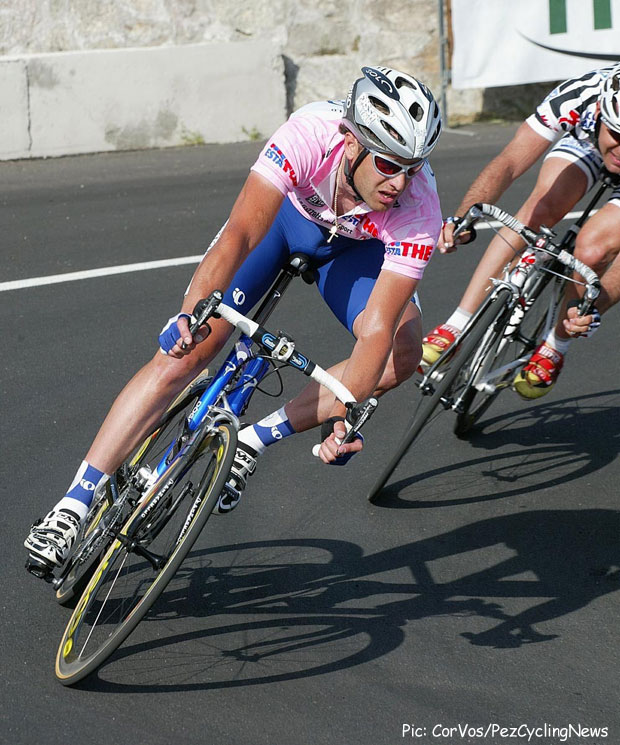 Descending in pink at the 2003 Giro d’Italia at the height of his career. In that year’s Giro Petacchi took an amazing 6 stage victories. 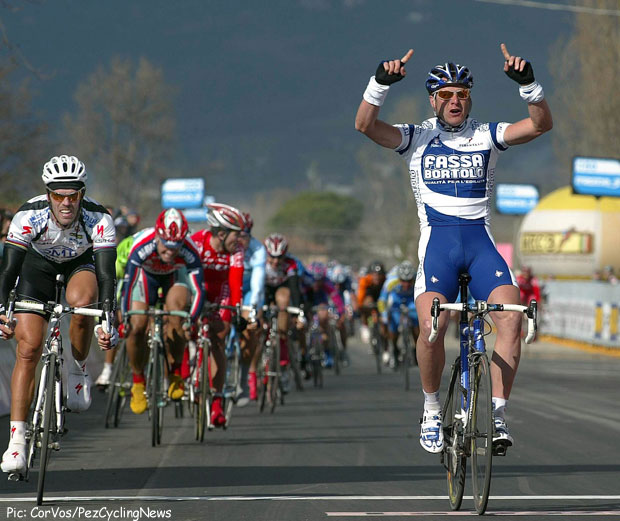 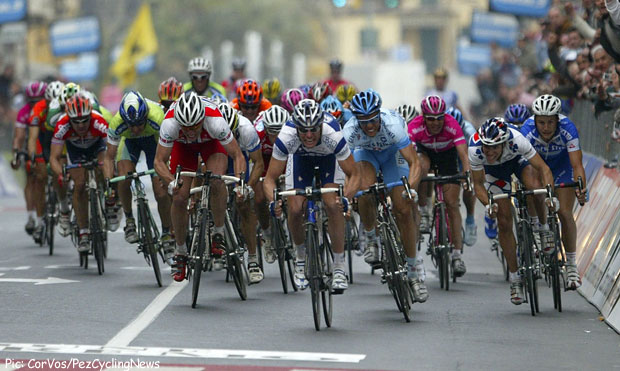 Arguably Petacchi’s biggest win was Milan San Remo in ’05, his only Classic victory if you count Paris-Tours as a semi-classic. 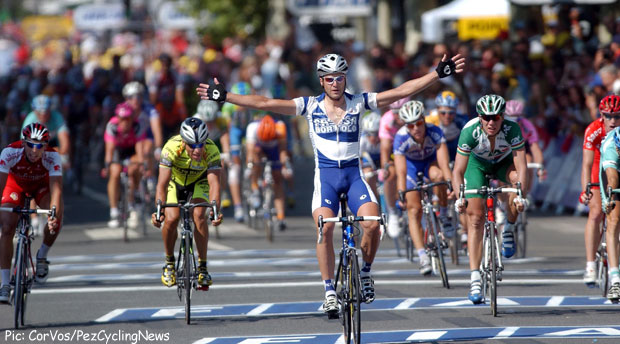 It was in the Tour de France where Petacchi was often at his best claiming a total of 6 stages in his career. An impressive stat sure but that pales in comparison against his Giro record with a phenomenal 22 stages! 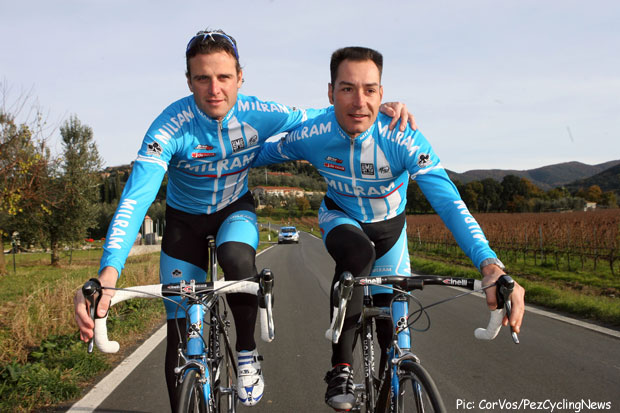 From the Italian super team at Fassa, Petacchi moved on to the new German/Italian squad of Milram in ’06 where he teamed up with former rival and now sprint partner Erik Zabel. 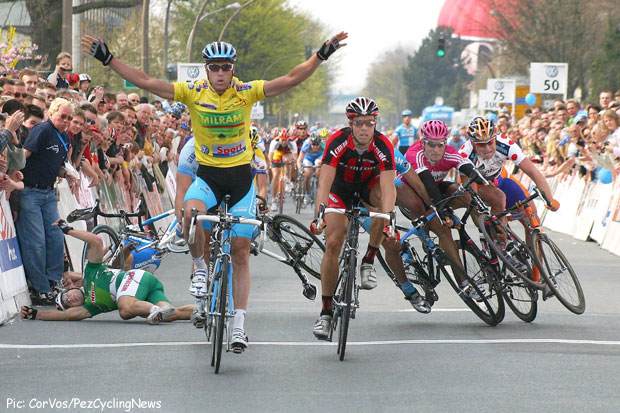 The partnership worked well but perhaps not so well for those behind him…. 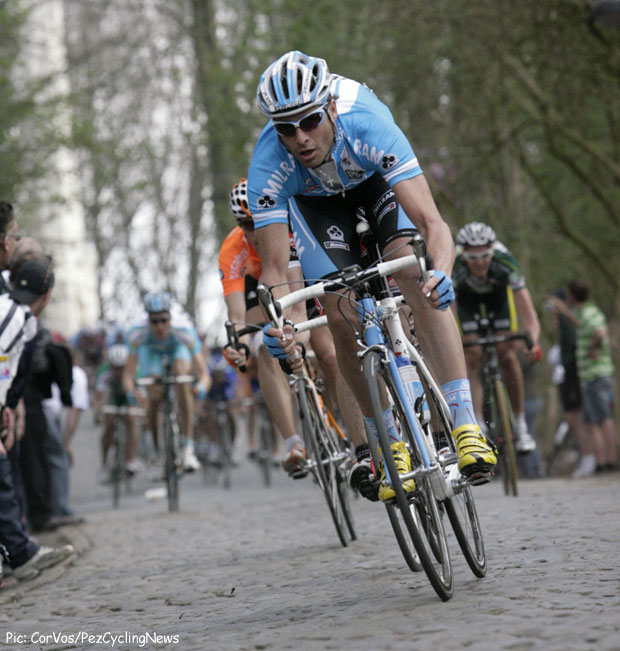 It was also with Milram where Petacchi’s career started to go downhill following on from a non-negative test for the asthma drug salbutamol in 2007. What followed was a long drawn out process that eventually saw Petacchi suspended by the UCI and fired from Milram despite Petacchi claiming his innocence. 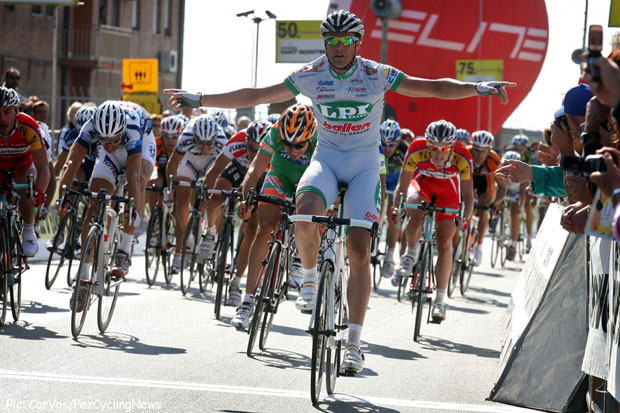 In 2008 he returned with the smaller Italian team LPR and immediately got back to his winning ways with victories in some smaller races…. 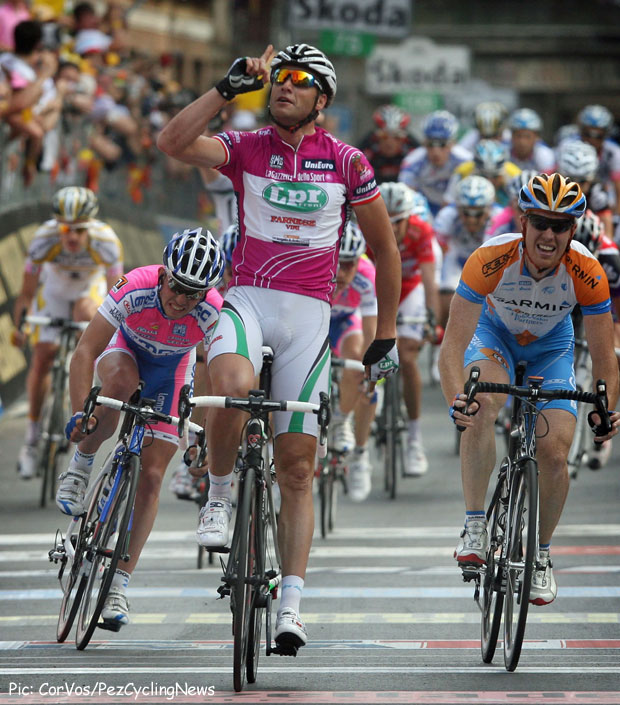 Before returning with a bang in 2009 at the Giro where he took 2 stages and was starting to look like his old self. 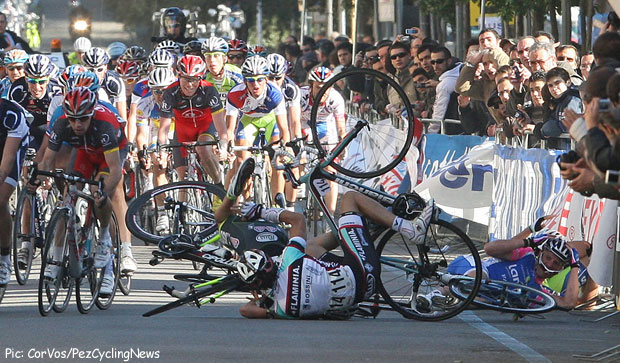 In 2010 Petacchi made his way back into the big leagues with the Lampre squad but it didn’t start too well with this horrible crash in an early season race. 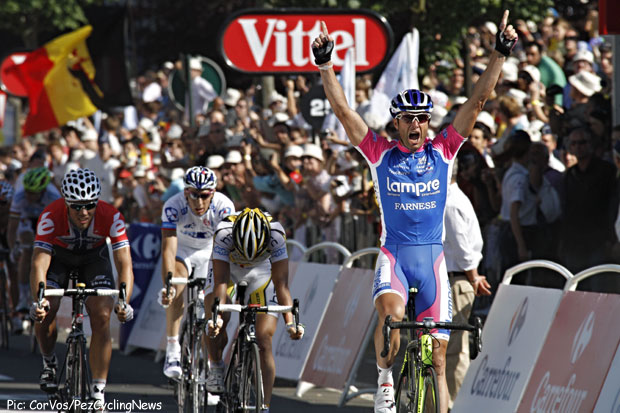 He impressively bounced back though and later that year at the Tour de France he claimed 2 stages and won the green jersey ahead of Mark Cavendish and Thor Hushovd. 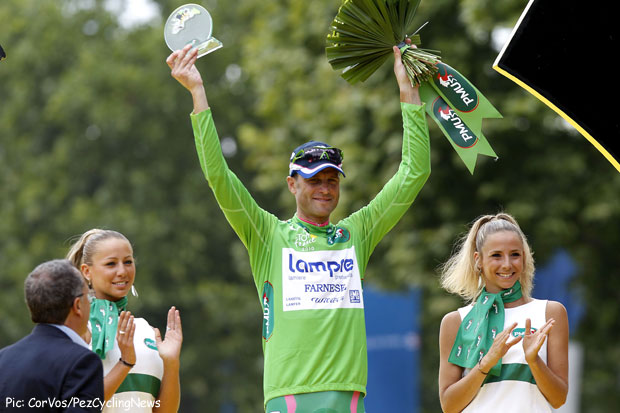 The points jersey win in France was one of the true highlights of his career and gave Petacchi the rare triple feat of being a rider who has won the final points classification jersey in every GrandTour (Giro 2004, Vuelta 2005, Tour 2010). 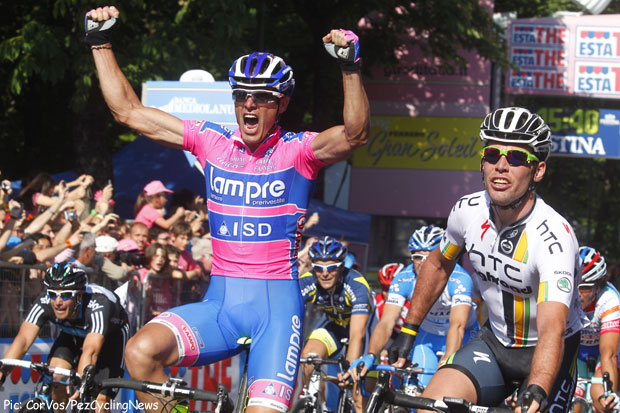 In 2011 the Cavendish/Petacchi rivalry was in full swing with Alessandro landing the first blow with a victory on Stage 2. It was to be Petacchi’s last stage victory in a GrandTour though with only smaller wins in the likes of the Bayern Rundfahrt to keep the victory tally going in 2012. 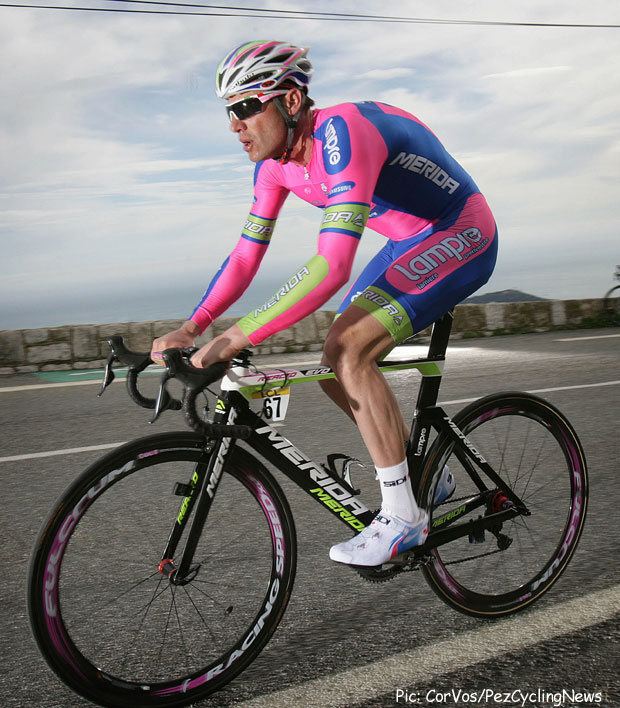 In 2013 Petacchi lined up again with Lampre, now known as Lampre-Merida but no wins were forthcoming in the early season races. 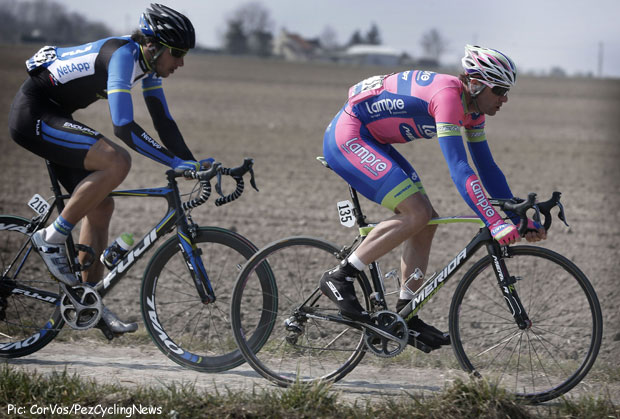 Interestingly this is the last shot of Petacchi in the archives, one from this year’s Paris-Roubaix where he failed to finish the Hell of The North – a race he only raced twice in his 18 season career.

Announcing his retirement this is what Alessandro had to say:

“Paris-Roubaix closed an early part of the season in which I raced a lot, trying to be protagonist in traditional appointments, such Milano-Sanremo, and in competition for me less usual as Paris-Roubaix. I approached all these races in the whole professional way, driven by the enthusiasm that Galbusera family and the new sponsors gave to the team. I’m aware I gave my best, as I always did in the 18 seasons as professional cyclist.

My career has been full of satisfactions and enriched by all the most important victories that a rider like me could ever aimed to. At the threshold of the 200 victories in career, I feel my life reaches a peculiar moment, a turning point in which I perceive the need to find a new dimension and to have more time to dedicate to my family. These considerations induce me to the decision to pause my career.

I always put first the professional side of my job, honoring the efforts made by sponsors, such Lampre, Merida and all the other partner of the team: I really thank them for the trust they gave me in these marvelous years. I feel it’s time to dedicate time for myself and to go in search for new spurs.

By now, I want to say goodbye to all the cycling fans, considering that maybe there will be the chance to come back some day to be part on the world that gave me so much, offering my experience to the new cycling generations. I’d like to thank the team, the sponsors, the management, the staff and athletes and everyone that supported me during my career, confirming by now my availability to support, when necessary, my mates and the team with advices and my experience.

With all that said though have we really seen the last of Alessandro Petacchi in the pro peloton? Today, just one day after his ‘retirement’ he’s already talking with the Italian press about a comeback as a leadout man for a big name sprinter. Showboating? Next morning regrets? We’ll have to wait and see on this one.

PEZ Takes On The Ventoux!