The Wounded Warrior Project’s Soldier Ride “Golden State Challenge” paid a visit to the Amgen Tour of California this year. The Soldier Ride provides rehabilitative cycling events for severely injured service members, which for many of these combat-wounded veterans the program offers a way to return to an active lifestyle.

Many of these men and women have been physically active throughout their lives and are eager to reclaim an athletic activity. The program offers wounded warriors a chance to get on a bike and prove to themselves, “Hey, I can still do this”. Soldier Ride is not about politics. It’s not about the war. It’s simply about men and women who are recovering from serious injuries. 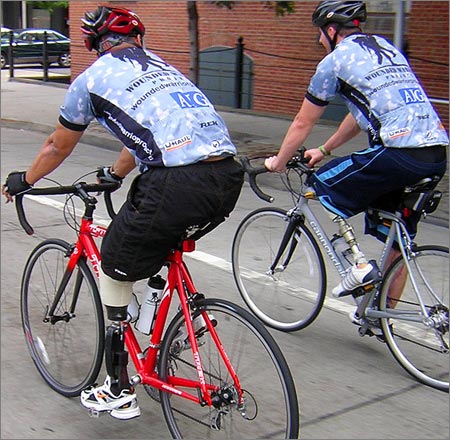 In 2004, Chris Carney from Long Island, New York completed a coast-to-coast bicycle ride in support of the Wounded Warrior Project. This was the first of what would become an annual event, The Wounded Warrior Soldier Ride. In 2007 Soldier Ride switched to a regional ride format with seven rides. Each ride consists of three to four days of cycling in a specific region of the United States. 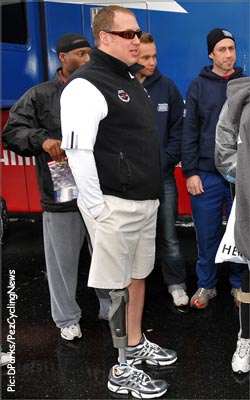 One of the founding riders, Lonnie Moore, was the victim of an IED.

The Golden State Challenge Ride began in Palo Alto, CA. The group consisted of about 30 veterans who ride with injuries sustained from the Iraq war. They rode their adaptive cycles 20 to 30 miles per day, with vehicle transfers traveling south to the final destination of San Diego, CA.

The riders made a stop in Santa Clarita to see the start of the final stage of the Amgen Tour of California. Before the stage began they were offered a special invitation to meet with the Toyota United Professional Cycling Team and staff. Toyota racers Dominique Rollin, Heath Blackgrove, and Henk Vogels were on hand to exchange autographs and swag with the soldiers. 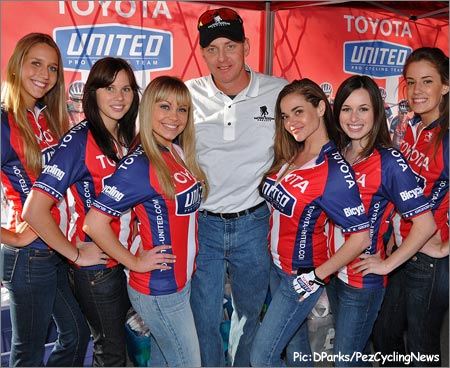 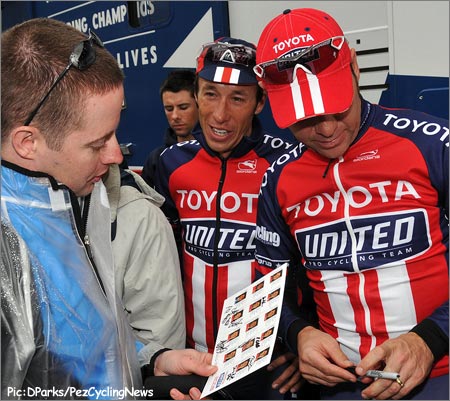 Navy Lieutenant Steve Peace checks out his autographs from Heath, Henk and Dominique.

Wounded Warrior Project, assistant ride director, Doug Sawyer sums up the riders’ California experience, “Bringing our Wounded Hero’s together really helps these young men and women, through an activity such as cycling, to re-integrate into society. The Wounded Veteran’s bond quickly while riding as they can relate to each others experiences. Our stop in Santa Clarita, attending the Tour of California, and meeting the Toyota United Racers, was a very exciting experience for our veterans…” 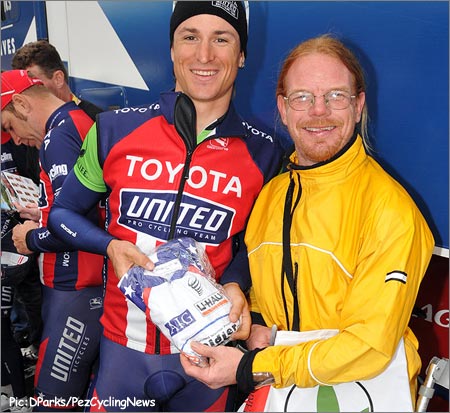 “Most, if not all of our vets, have never seen first hand the pageantry and excitement of professional bicycle racing. Meeting these professional racers was one of the highlights of our journey and I believe the Toyota United team was excited to meet our courageous riders as well.” 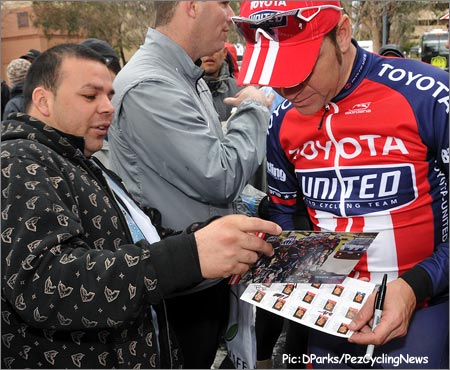 Wounded Warrior Esteban Gomez gets an autograph from Henk Vogels.

Henk Vogels was especially dynamic with some jokes and tales of his experiences in European races such as the Tour de France. Heath and Dominique were very friendly signing autographs and fielding questions from the soldiers. After a group photo, Doug was invited onto the team bus and he offered many thanks and encouragement to the Toyota United team and staff. 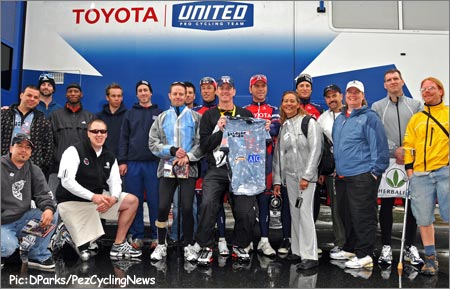 The Wounded Warriors relish in a group photo with the Toyota United Racers.

Doug would like to thank the entire staff, of Toyota United for making the Santa Clarita stop a very memorable visit. And special thanks to Darrell Parks who was very gracious with his time, covering much of our visit to the 2008 Tour of California!

• Please visit the web site for more information on the Wounded Warrior Project at www.woundedwarriorproject.org .
• And thanks to Toyota-United for their hospitality!

For information and to participate, email Woody Groton, Soldier Ride’s director, at [email protected] or call (904) 296-7350 for further Soldier Ride updates and news.