Bar De Smisse, Bellegem, 13:00 hours and the guy from the Belgian Cycling Federation has arrived with a box of photo copy paper and a coin holder – we’re in the right place, alright. The trouble with going to see a classic is the “cold turkey” the day after; the only cure is another bike race.

This article originally appeared the day after Gent-Wevelgem in 2009.

Ian Vansummere is first to sign on at 13:25 and the smoke in the cafe is approaching Chernobyl levels – them EU directives don’t cut much ice in Flanders. By 13:40 there’s a steady stream of fresh faced young men coming in to the bar to sign on. And not just Belgian; Australian, Polish, Norwegian, Lithuanian even Japanese. By 14:00 it’s dossard number 80 being handed over, the names go straight into the laptop for printing just before the start. 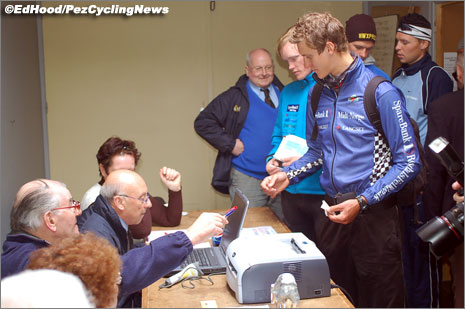 Someone has opened the door to let the smoke out – it was only a matter of time before one of the young riders passed out.

It’s 14.30 and time to print the start sheets; 99 riders, 14 laps of an eight kilometre circuit. Number one is always left blank, unless the Belgian champion is riding, that number is reserved for him. 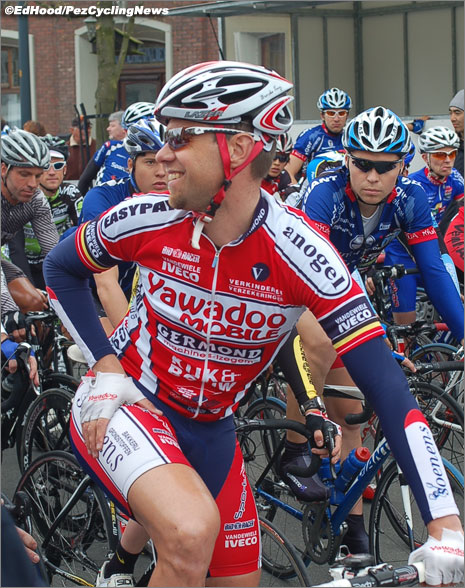 There are a few big hitters here, ex-Giro rider Tony Bracke, Mario Willems who wins 30 plus kermesses each year, Mariusz Wiesiak from Poland who has won the UCI Archer GP in England. These three know the score, arriving last for the 15.00 start and ‘reversing’ into the front row; there’s no way they’ll get caught in a jam at the start.

Without too much fuss, they’re off. We’re left with a Flemish cover of the Bellamy Brothers, “Let your love flow” and the frites cart. “Trei groeten!” orders Viktor, with authority. Lap one and two, it’s “peloton compact,” the casualty rate isn’t high, just a couple per lap – but what’s this? “Pippo” out behind the Katyusha car, doing a spot of motor paced work – a result on Sunday?

Lap three and it’s thinning out as the pressure goes on. Things are quiet at the photo and key rings stand, in fact it’s deserted – still, it can’t be the Ronde every day. 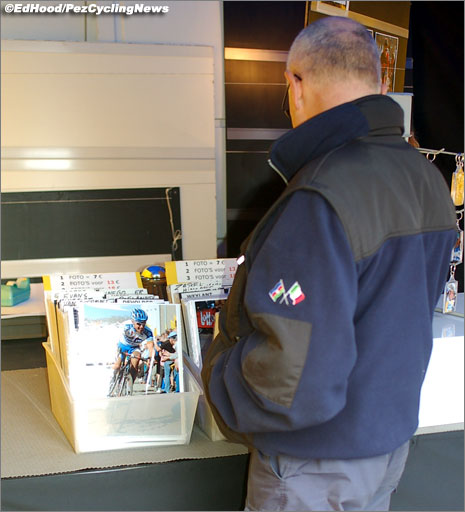 Alan Oras leads another four through, but the break isn’t going far, they’re chasing hard behind and another six head for the strip. The bookies have no doubts about the winner; Mario Willems is at one-and-a-halfs; Bracke can’t be on-cam yet, he’s at 8 to 2. 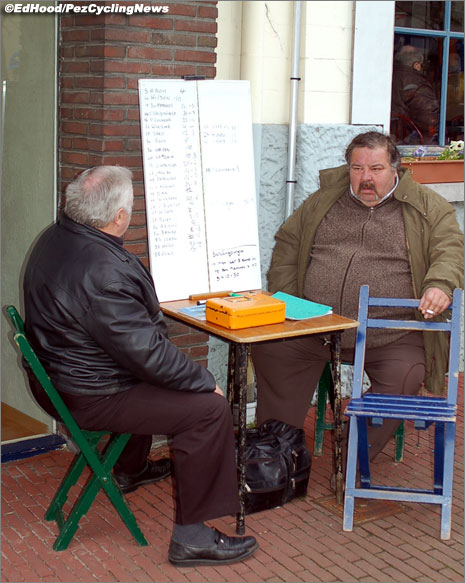 The fifth ronde (lap) and it’s split; it looks like if you’re not in the front 30 or 40 then it would be better to save it for tomorrow. The music goes from grim to great, German “oom-pah” then Barry White.

Two are away on lap six, the gap to the split hasn’t yawned open yet, but that second group is much reduced – in Flanders you don’t “just ride round.” 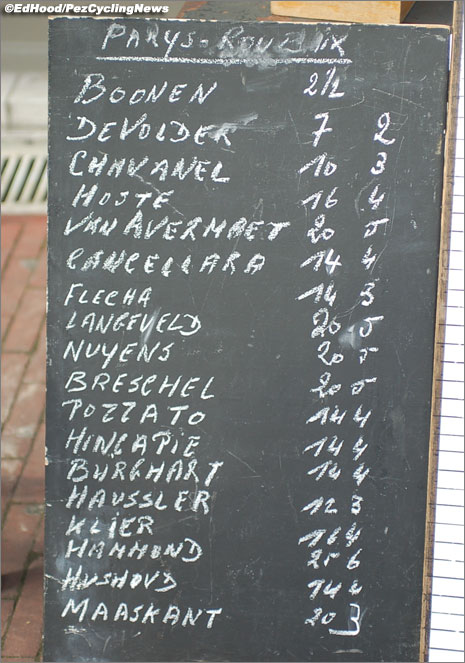 They bookies were right about Boonen.

Lars Strand is down from Norway to ride a few races and prepare for their season, which starts in a fortnight. He crashed yesterday and today; one of his team mates has dislocated his shoulder and another one broke his arm – it’s not for wimps in Flanders. 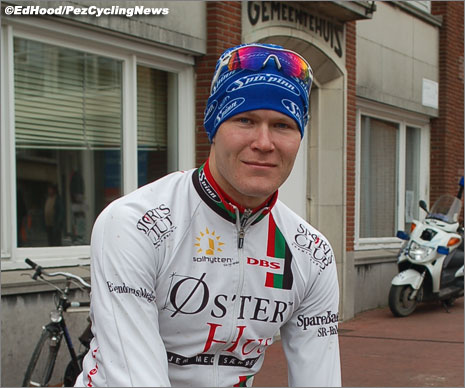 It was a rough day for Lars Strand, and even rougher for his teammates.

Lap seven, there are 20 away from the front of the split and it looks all over for the rest. As the lead car approaches, the supporters sprint out of the bar and pretend they’ve been leaning over the fence all the time. Like Joe Parkin said in his book, ‘Dog in a Hat” – one lap equals one beer!

Lap eight and there’s been an explosion, it’s split to pieces at the front and the bunch is well down.

Dave sends me an SMS; Lance is having problems with the authorities – so, what’s new?

The ninth lap sees the race take on what looks like its final shape; maybe 25 in a line working smoothly with the bunch around a minute back. Tony Bracke looks cool, but is stone last in the bunch. 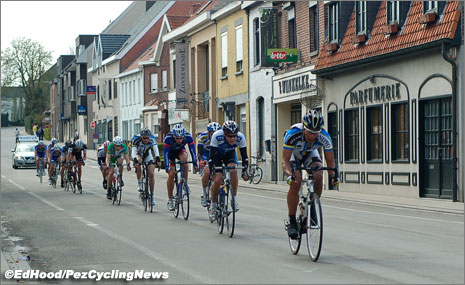 The group has been whittled down nicely.

Local amateurs train the round the course in opposite direction, trying to look cool – we’re not impressed; they should be riding the race. 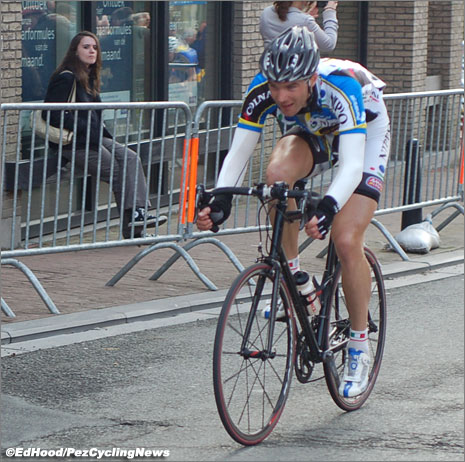 These races run with a “rolling” road closure, the police or official race marshals stop all traffic when the lead car with it’s red flags appears, then open the road after the car at the tail end of the race with the green flags rolls past – it works like clockwork.

A group of four has gone clear at the front on lap 11, Mario Willems is in it, that looks like the winning move to us. Back in the bunch they’ve accepted their fate, but there are still prizes for the first twenty, on the line. 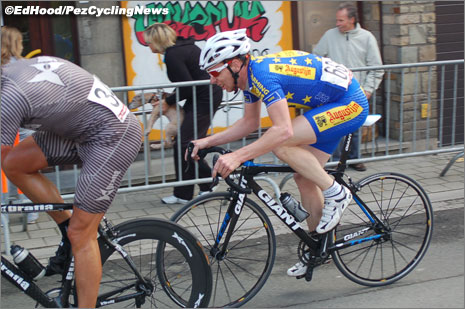 Winning 30+ kermesses a year doesn’t mean that it doesn’t hurt for Mario Willems.

Helpers get up from their picnic chairs and spare wheels to stretch their legs – soon be time to go home!

It’s all change on lap 12, the leaders are together again and the bunch has dropped its pace by 5 kph.

The guy who’s fascinating us is number 34, Ronald Roos, he has a great tan but a tweed-effect skinsuit and only one chainring – you do get “uncool” in Belgium too. 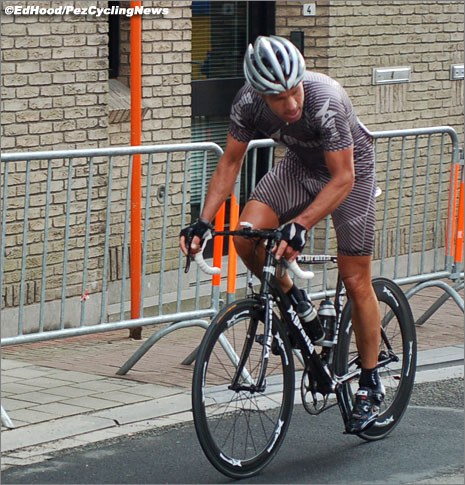 Single ring and tweed…but strong as a bull: Ronald Roos.

“Lezt lapp!” says the “speaker” as Wiesiak and Willems lead a little group through – those East Europeans like the euros.

It’s still dead at the key ring stand but it’s steady at the burger and frites stands – the bars are starting to empty though. 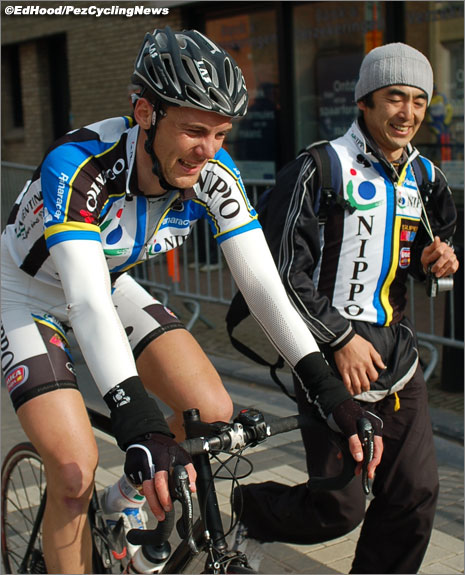 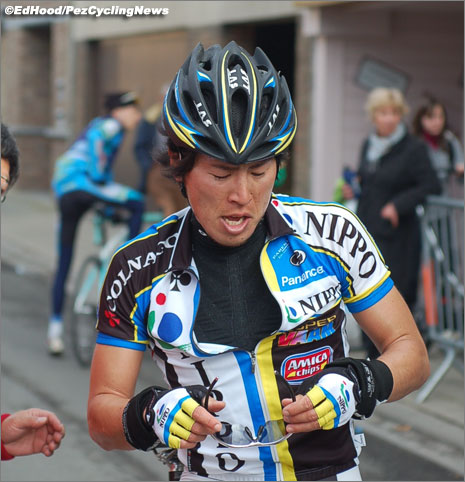 …and his very tired teammate.

At the bookies it’s now 3 to 4 ‘on’ for Willems; 3 to 1 for Wiesiak – that’s not a bad bet. Willems leads it out up the drag, but the big Pole kicks on the line, Willems bangs his bars. 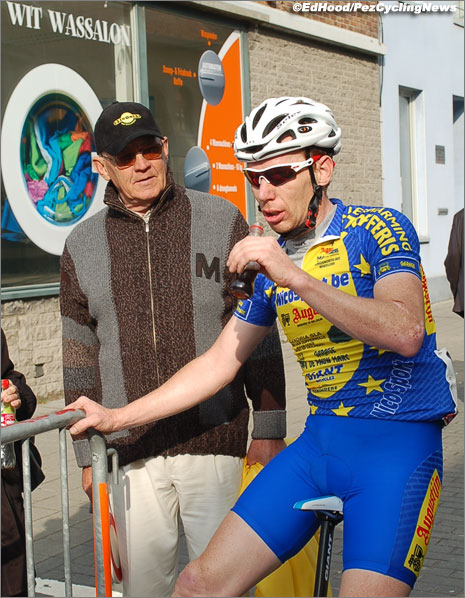 Willems reflects on the sprint.

What time is that damn plane?

A Closer Look At Flanders: The Koppenberg