On January 13th 2004 Tim Johnson set out on the next major step in his cycle racing career when he flew from the USA to Spain. His destination, Puente Viesgo in sunny Cantabria where he joined the formal launch of his new Div I team, Saunier Duval-Prodir on January 23rd. We take a look at Tim’s journey to this point in his career.

Saunier Duval-Prodir is a team making bold steps into the upper echelons of the sport. The company of Saunier Duval (a leading heating technology company with 7,100 employees, sales of more than 2 million appliances and a turnover of 1.4 billion Euro) has for many years sponsored cycle racing but 2004 marks the first time that it has assumed the role of title sponsor. The team has been given the fiscal power to build for the future. Their recruitment program has garnered sufficient riders of quality who together possess enough UCI points to enable Saunier Duval-Prodir to be recognized as a Div I team. Unlike Phonak, the team has opted to not engage superstars (such as Phonak’s Hamilton and Sevilla). Instead the 2004 squad comprises a team of talented and experienced riders who provide multiple strategic and tactical options once out on the road. They will be a veritable powerhouse capable of adapting the team to specific racing challenges. 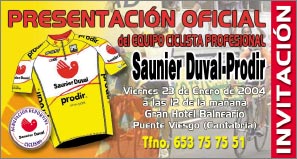 The official launch of Saunier Duval-Prodir took place on January, 23 2004.

So as Saunier Duval-Prodir throws down the gauntlet, its new recruits step into an exciting new adventure at the very top of the world’s toughest sport. Not least of these recruits is CCB/Volkswagen alumni Tim Johnson, and his case reveals two important developments. Firstly for Tim the rider, and secondly concerning the continuing evolution of cycling into a truly global sport.

Tim the Rider
Hailing from the Boston area in the North East of the USA, Tim started out his racing career with the local CCB/Volkswagen cycling club (as did Tyler Hamilton). Very early on he gravitated towards cyclo-cross and came into national prominence when he won the 1995 Junior National Championship. For the next few years Tim, as probably the first US ‘cross specialist’, remained focused on the specialty (scooping up a grand total of four US National Cyclo-cross National Championships along the way) when he made USA cycling history to become the first American rider to ever medal at the World Cyclo-cross Championships. That 1999 U23 Bronze Medal lifted Tim’s visibility within the cycling world and it also fueled his deeper ambitions to succeed on the road. With a World’s bronze medal in his pocket, Tim’s 2000 season results started to reflect a shift in his racing pattern. Cyclo-cross still dominated but serious road race results also started to appear as Tim decided that the road was a better place to look for a bike racing future. Interestingly that year, Tim also won the fearsome Mt. Washington Hill climb just a few hours north of his home in Massachusetts. 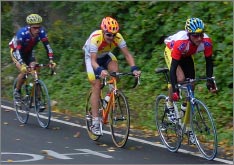 Tim’s solid and varied 2000 season (and his last racing in the amateur CCB/Volkswagen colors) indicated a broad range of talent that earned him a place on the USA’s premier professional outfit, Saturn. Starting in 2001 this led to three years of racing at the top, but mostly in the USA, with the occasional excursion to events like the Tour of Langkawi. But 2003 heralded the end of Saturn’s long and illustrious sponsorship and many of America’s best were left looking for new teams at the end of the season. Late in 2003 we learned that Tim had signed on with Colvita-Bolla, a US domestic squad based out of California. Weeks later an agreement had been reached between Colvita-Bolla and Saunier Duval-Prodir. Tim was on his way to Spain.

During his final season with Saturn, Tim produced some significant ‘breakout’ performances. In August 2003 he won the 237km Classique Montreal-Quebec Louis Garneau in Canada. This race was run in atrocious conditions where driving rain and a fierce headwind added to the misery of nearly six hours in the saddle. Tim took a solo win almost one minute ahead of the next rider. Next up was the World Championships in Canada where Tim represented the USA in the elite RR. Slick early morning roads caused quite a few crashes, one of which included Tim. He remounted and was soon to be seen attacking off the front. For much of the race the challenging Hamilton circuit was unable to create a real selection and Tim suffered with the rest as the frequent climbs drained everyone’s strength. Once the race was over the season was done, or so he thought.

As the Northern Hemisphere was shutting down its racing season Tim received an invitation to ride Australia’s Vic Roads Herald Sun Tour. ‘Down under’ and summer in the Southern Hemisphere beckoned with 13 testing stages of this venerable race with a 51 year history. The competition was aggressive and for the early stages Tim suffered the effects of jet-lag. He hung in and as the race progressed became one of the top animators until in the final phase of the event he clinched a dramatic overall victory. Being a major UCI categorized event, the win also earned Tim 150 valuable UCI points which contributed not only to his status but very shortly would be of value to his new team.

Globalization of Cycling
While Tim’s development and progression through the ranks of cycling have been steady and significant, his move to Saunier Duval-Prodir also indicates a much bigger development. Until recent years the core of elite cycle racing has been mainland Europe with countries like France, Belgium, Holland, Spain and Italy hosting every premier event and supplying most of the winners and creating legends like Merckx, Coppi, Bartali, Hinault and Anquetil.

With notable exceptions like the USPS story, most riders seeking fame and fortune at the highest levels had to work their way into the system by setting up camp in Europe. Belgium, France, Spain and Italy were preferred destinations and joining clubs with strong affiliations to pro teams was the recipe. If you were successful then eventually you could secure a place on the bottom rung of the cycling ladder as a ‘Stagaire’. After that a combination of ability, results and luck would dictate your future.

As with other professional sports, talent scouts are always on the look out for new recruits that show exceptional promise. Even up to recent years, these scouts limited their scope to performances achieved on the roads of Europe. It seems now that the old boundaries are evaporating and Tim was scouted from the ‘Global Village’. So as most of us tried to follow the rider transfer ‘soap opera’ in Europe, Tim suddenly became part of the script. As a result he will be setting up base in Europe as will his former Saturn teammate Tom Danielson who was scooped up by Fassa Bortolo in Italy.

Now we can see that Tim’s sterling results achieved in North America and Australia became essential elements towards achieving his personal ambitions for a racing career in Europe. It is also important to realize that races outside of the traditional European countries are increasingly being recognized as part of the ‘big picture’. However, having made it into the club, it will probably always be that the three Grand Tours and the Classics (especially the five monuments) represent the ultimate in professional cycling. For any young rider moving into this rarefied atmosphere it is a major step up from anything else that they have previously experienced. For those of us that know Tim, he has the speed, endurance, all-round ability and personal ambition to be as successful as any. 2004 will be a baptism of fire for him personally as it will be for the Saunier Duval-Prodir team.

Tim will be the only American on the new Saunier Duval-Prodir team.

Check out Tim’s former club in Boston – the CCB International

How To See The Classics: The Right Way