The winner of Milano-Sanremo comes from here. Someone says that one rides Paris – Nice to win Paris-Nice, but those who ride Tirreno-Adriatico do it to win Sanremo. Tirreno-Adriatico links two seas divided by Italy. Different seas and different people; you really cannot imagine how different. It’s the race that wakes me up from the long winter, the first breath of the new season. 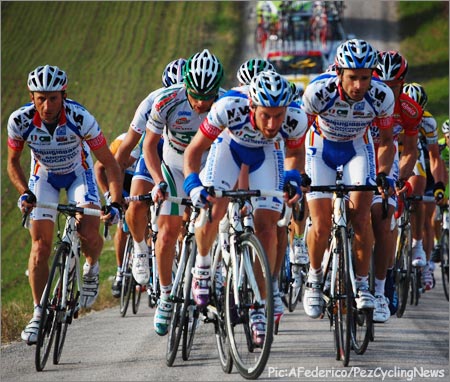 But here, on the Adriatic, everybody knows that this is just illusion. Everybody knows that next Saturday everything will be different from now. The Tirreno-Adriatico is not the real target of the champions riding here; it’s just the best way to approach La Primavera and the North Classics. You feel it in the departure village, where everybody is very relaxed. 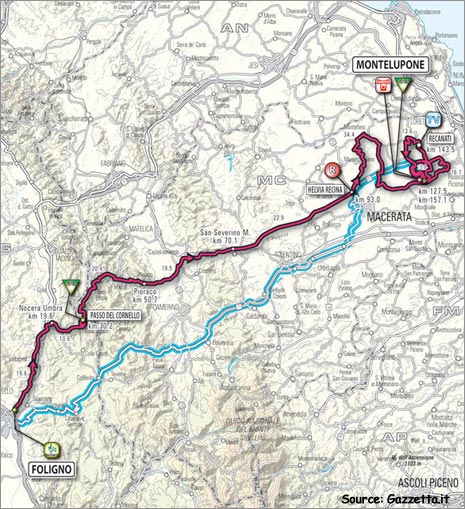 This race usually moves in the central regions where ancient towns give it hospitality for departures and arrivals. Forgetting for a day about my outstanding duties at work, I took stage 4, chasing the race from Foligno to Montelupone – and its feared final ascent.

Foligno is located in the Umbria region, one of the most quiet. Every town here has a square where the main church and the city hall are located – one in front of the other. The religious power and the civic power one against the other. Nowadays these squares are full of tourists roving around and looking for a good espresso. The departure village today takes place inside this square. 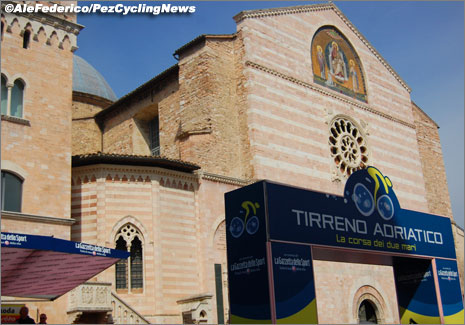 Today the key word is “relax”. Forget about the big Classic races, forget about the Grand Tours; today I have the opportunity to enjoy cycling across the landscapes of the hills facing the Adriatic sea. The riders apparently understand my feelings, and are also relaxed at the departure. 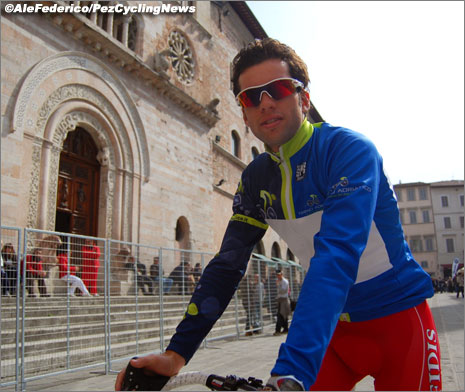 One by one, without hurry, without waiting until the last minute. El Farer, the leader of the overall standing, is the first one to sign and grants a picture and few words: “Hard to keep the jersey today. The final climb is hard; very hard. Too many people want to win and we are too many in a few seconds.” 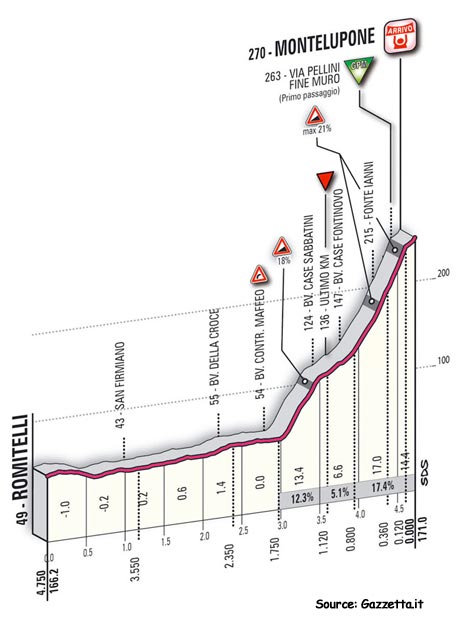 Yes, it’s true. The final climb is really difficult. I don’t know yet the terrible slopes of the final kilometre in Montelupone but I have in mind last year’s sequences when all the bunch had to walk it. Someone says that last year the riders choose wrong gears for that climb. Today they’re prepared and most of them start with the 36×27. Too light? We’ll see. 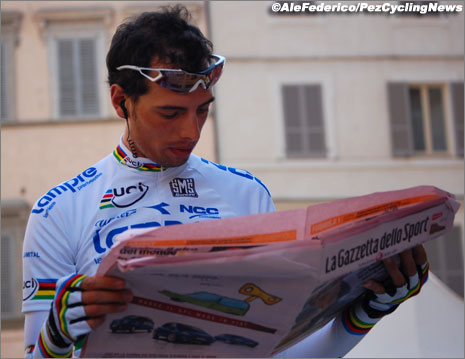 Time goes fast and the old bell sounds the noon time. Ballan reads his Gazzetta; I read it a few minutes before and I try to guess if he’s reading the article about Basso or the article about Farrar’s win. on the previous day. I slant for the Basso one. The bunch voices say that Basso’s popularity is not well accepted by the Italian riders. 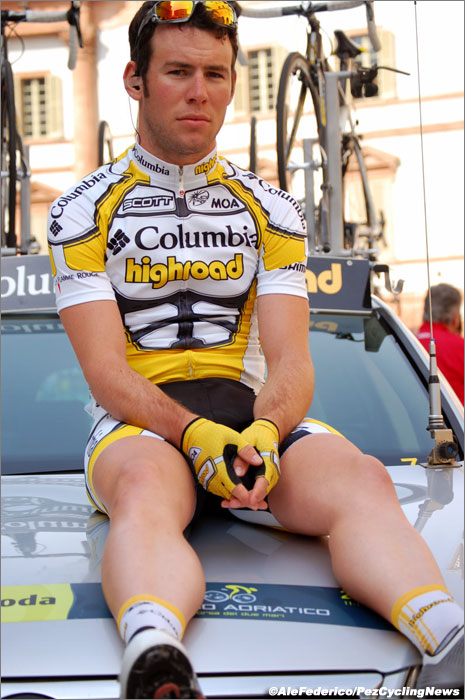 Cavendish has other plans for waiting; he doesn’t look too worried by the final climb. Finally the engines starts and the race moves out of the square. I take a southern shortcut to make it to the finish line well ahead of the race. When I approach the Marche region, in front of me opens the view to the magic hills. This is the Tuscany of the Adriatic side; still unknown to mass tourism but, probably, the next tourist mania for the Northern Europeans. While I drive I think continuously to the slopes of the last climb. How can a climb be so hard even for the pros? 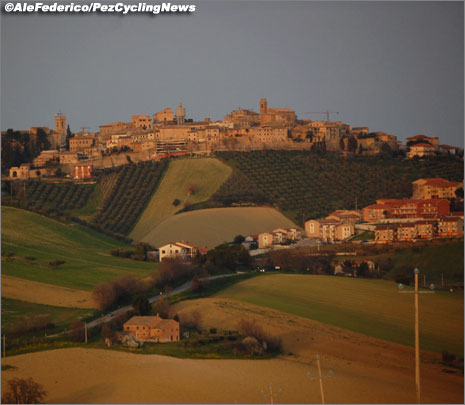 In front of me the answer. The old village of Montelupone is the over there with its brick walls. The landscape is gentle and warm. Olive trees, grain fields and cypresses. Inside any house here there’s a woman preparing the piadina (a local bread famous on the Adriatic side of Italy) for dinner; guaranteed. 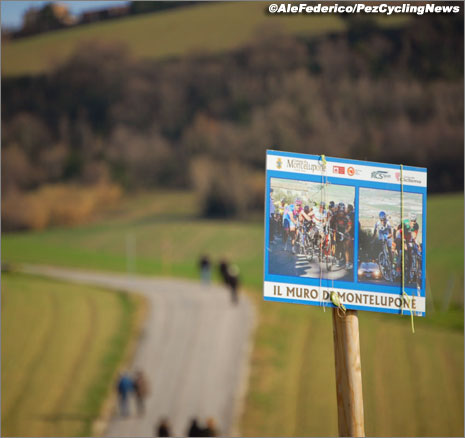 All the othere are on the ‘Muro’ – the Italian way to call the wall. The Belgians have the Muur de Huy; Montelupone answers with its own Muro. At the top of it there’s a small crowd. Everybody waiting quietly for hours. 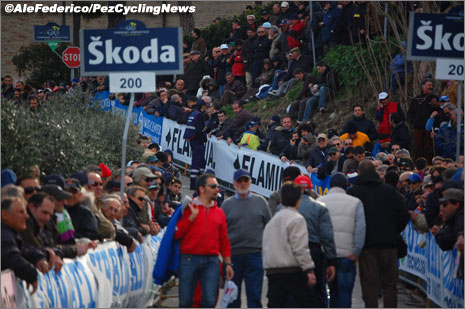 It’s very difficult to give an idea of the final 200 metres. No picture can help as everything is crushed. You’ve just have to believe me. From the top of it you just don’t see the road. The road disappears. I believe that this street is normally closed to the traffic as it would be really very dangerous to drive over there. I decide to walk all the Muro and see the first passage of the race at the base. It’s 2 km long and is very irregular. The steepest slopes are located exactly on the last 200 metres. But also the beginning of the climb is hard. Very hard. 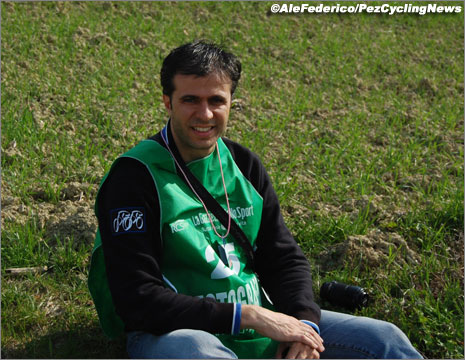 I find a nice spot on the side of the road waiting for the race. A peach tree beside me; its pink flowers are going to open in few days. It’s the time of the year I love more. It takes me back to the years when I started to ride alone. When riding my bike was the only way to discover a world out of my home, of my family and of my friends.

There was a sea that time on the side. It was the Tirreno, the sea I have inside; its sound is deep and strong at the same time. Then my life brought me on the other sea, the Adriatico. It hasn’t a regular sound. It’s a crazy sea turning from calm to rough in less than half an hour. It took more then thirty years this transition of my life and, probably, is still to complete. Since I’ll wake up with the Tirreno sound in my ears I will be one of its sons for ever. 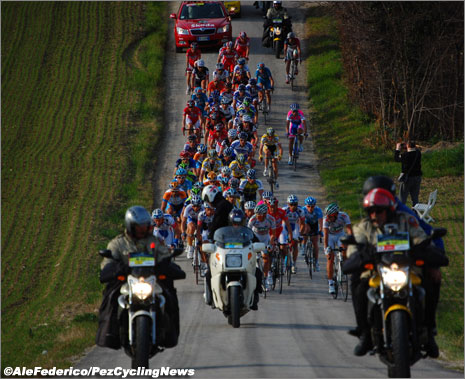 It’s over there, the Tirreno-Adriatico. Approaching this hard climb as fast as possible. The favourite teams prepare the battles. The leaders follow them and the other… just lose the wheels. The speed drops drastically as they approach me, just a few hundred meters from the beginning, not faster than 12-13 km/h. I could easily run beside them. 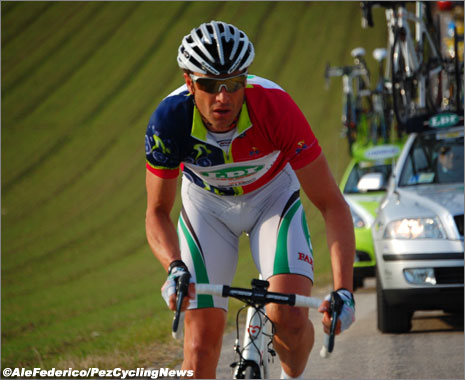 Petacchi just dropped but still nice on the pedals wears the points jerseyё I was confusing him with some unknown rider of an unknown team. Then I move up till the last 500m. It’s not possible to proceed over; a very determinate RCS official calls me back on my steps when I try to find a better position behind the turn. 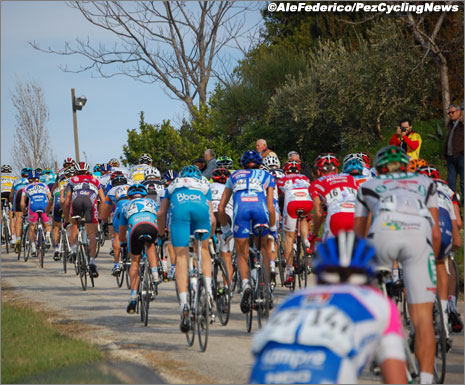 Then I decide to stay at the car deviation, where all the official cars are obliged to leave the Muro for a safer road. In that position the slope is “only” 14-15%. When the last riders approach that point most of them are exhausted. They barely look above themselves to guess what is over the turn. Better they don’t know it.

At the end the passages the road is congested by the people and I decide to follow the team cars on the deviation road. It’s a good move. I first meet Pozzato, ready to leave. He stops Zanatta (Liquigas manager) and starts to tell him how difficult it was to stay on the bike over there. “They are human” – I think. Pozzato smiles and jokes, he doesn’t look tired at all. These are the main signs a race like the Tirreno can give for the next Sanremo. 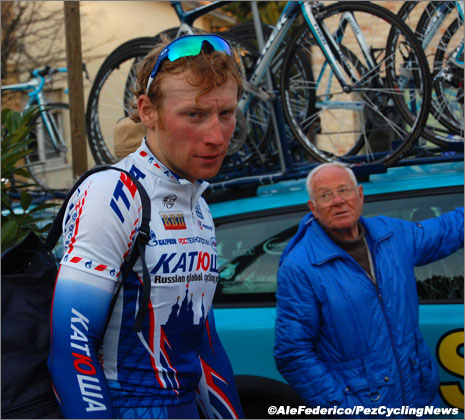 Few meters above there’s Pavel Brutt, (PEZ chased his ITT in Oropa two years ago). His face looks stunned. Not everybody can joke with the Muro di Montelupone. But when I approach him asking about a possible early break during Milano – Sanremo (he tried it already two years ago), he turns to a large smile and says: “I really would like to”. After this long day on a bike, after a terrible climb down twice, this guy still thinks ahead to the first morning of a race that counts 300 km of road. We will wait for you Pavel. Try it again.