Sunday’s finish in Westminster was a fitting end to a fantastic first Tour of Britain. City slickers were joined by out of towners, many of whom had seen the race in the regions but heard London calling them to witness this spectacle one more time.

The Hills are alive with the Sound of Celts
We arrived at Celtic Manor in South Wales to watch the riders take the bell on the second ascent of the finish climb in what was a three-lap race. Short and very steep, this hill has decided the last two National Champs. Cycling has a strong following in the Welsh valleys, and the locals were out in force on the climbs. Welshman and local hero Yanto Barker received the loudest cheer. However, fellow Welsh Julian Winn snapped his frame and was forced to abandon. Just as we were leaving our spot a golf ball landed close by from the course adjacent to the course – fore!

Then it was over to the finish area to get ready for the finale – circuits make race viewing so simple! Keeping the crowd going was a series of kids’ elimination races on the coolest Schwinn bikes. Welshgirl, Nicole Cooke, 2003 World Cup Champ, made an appearance on the podium and announced that she’d be gunning for the World Championships and would like to get her World Cup crown back next year after a season messed up by a knee injury.

Pint Sized Champ
The seven-minute gap was coming down and was only one minute with fifteen kms to go. Surely, the hill was too sharp for a sprint? Yes – but the peloton regrouped and then split again for little Colombian Ardila (and he is tiny), who ripped up the final climb, punching his fist in the air to take the stage, retain the yellow jersey and effectively secure the overall ToB 2005– class.

Weight Watchers
After Newport the peloton were not the only one with a crit on their mind as I had entered the warm up race – the aptly titled ‘Bob Chicken Grand Prix of London’. After all I had Bacon Butties to burn off not to mention all the cakes and biscuits the race organisation kindly supplied us with. Now I can hold my own in a crit but having seen the start sheet I was a touch apprehensive about the challenge ahead. Anxiety was raised when I’d overheard some pro riders encouraging none other than former pro and Belgian legend, Johan Museeuw to enter, telling him that other ex-pros such as Sean Yates were riding. Thanksfully, Johan claimed that he did not have a bike and none of the pros offered theirs!

European Vacation
The one mile lap passed The Houses of Parliament, Big Ben, Downing Street, The River Thames, Trafalgar Square – phew. Multiplied by 25 laps, equals one whole load of sightseeing! In fact it was reminiscent of the scene in National Lampoon’s European Vacation where Chevy Chase says ‘look honey there’s Buckingham Palace again!’ However the only sight I saw was the back wheel I stayed glued to until a crash caused us to loose time and eventually be pulled out of the race for fear of being lapped by the leaders. 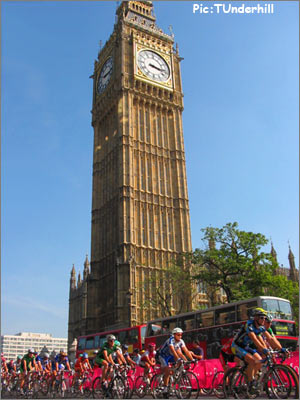 Meet the King
My disappointment was remedied within minutes when back on the roadside I met the king, Eddy Merckx. Eddy was looking slim and cool in retro shades. He was also hanging out near the VIP area fences to sign autographs for fans before chatting with Boonen and Johan Museeuw – the all-time Belgium dream team. 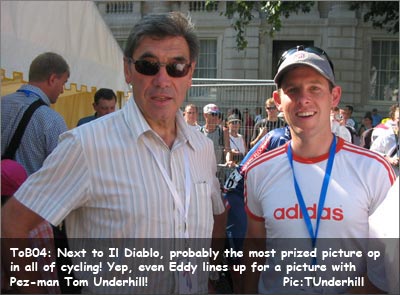 It’s the Real Thing
According to the BBC, by the time the main race came around ‘tens of thousands of people packed the 1m circuit’. And boy did we make noise, especially when Bradley Wiggins went off the front only to be caught two laps from the end. Londoners banged those boards like crazy! The only non-Brad Wiggins supporter was a big annoyed Aussie, apparently Brett Lancaster of Panaria’s cousin. He was pretty miffed that our Brad had beat their Brad in the Olympics and was being wound up a treat by a bunch of ‘pomms’ opposite him on the finishing straight. On the bell lap his cousin Brett led the race round (having caught Brad Wiggins) and he screamed ‘look, look, we’re the best!’ By the time of the bunch sprint the roof was coming off the capital as Enrico Degano put it an impressive sprint to pip Julian Dean to the line and bring the tour to a close. 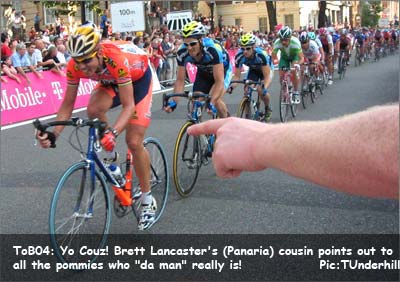 Encore, encore
The major tours will always be there and so will the classics. They’ll all form part of next years’ uber-circuit, the Pro Tour. Whether or not the Tour of Britain will or will not be repeated isn’t certain.

But c’mon! Britain is Europe’s second biggest market after Germany, has had consistent Olympic cycling success not forgetting inventing the bike in the first place! If Britain didn’t have a stage race one would have to be invented. As a spectacle from the roadside the ToB comes highly recommended. If you live a long way away, tie it in with your holiday– bring your bike and sample some of the fantastic rolling green countryside where you’ll join cycling fans as passionate as the Italian Tifosi, that enjoy their booze as much as the Germans, and party like the Spanish. I for one will be banging on the advertising hoardings next year – just hope that there’s a race, or else I’ll look damned silly and might get busted for disturbing the peace!