Tony Hoar R.I.P. With Much Respect

Regrets, I don’t have too many – but one is that I’ve been meaning to contact Tony for several years to interview him about his now legendary journey to the ‘red lantern’ in that 1955 Tour de France, the year I was born. Unfortunately, as I have done with other riders we have lost, I’ve left it too late. 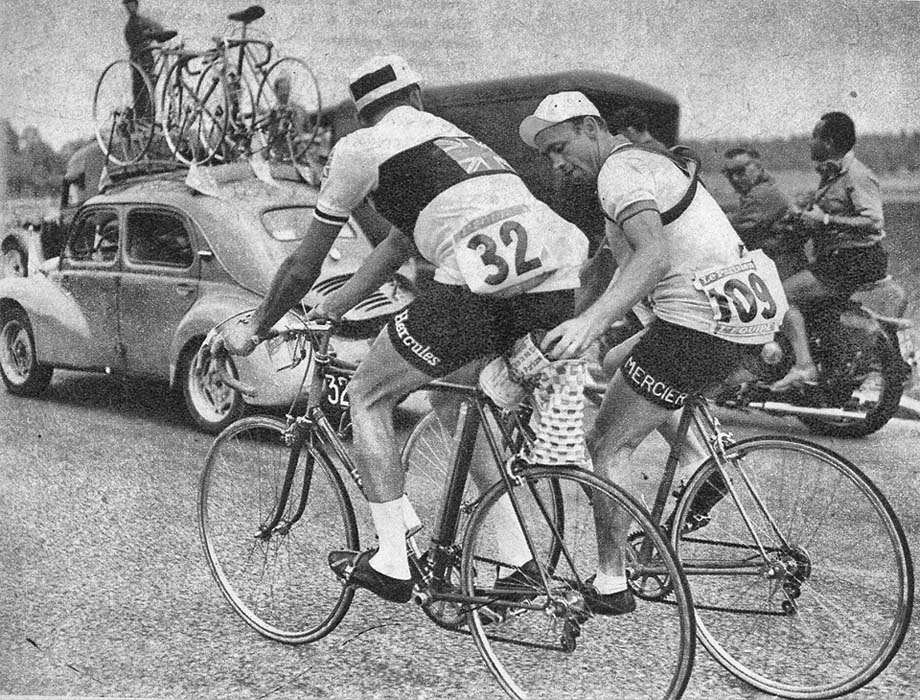 Born in Elmsworth, Hampshire in 1932 as an amateur rider he was originally what we would now term an ‘endurance’ track rider. His name first appears on the road palmarès websites in 1953 as winner of Stage Three of the long gone Tour of the Stations – Hereford to Port Talbot – a five stage race won overall by talented Scot Joe Christison.

In 1954 he rode the road race in the Empire (now Commonwealth) Games in Vancouver, finishing out of the placings behind winner, Eric Thomson of England. The Prestigious Folkestone to London – a race that would be won in the 70’s/80’s by the likes of Sean Yates, Paul Sherwen and Bob Downs – over 100 miles, fell to him; and that season he also took three stages and finished third overall in the Tour of Ireland.

The following year he won stages in the Tours of Egypt and The Netherlands as an amateur whilst still working for his brother as a plumber. But an offer from British bicycle manufacturer, Hercules to turn professional for £10/week was too good to refuse. The team, although ill-prepared for such an adventure, entered the Tour de France, the full line-up was: Brian Robinson, Fred Krebs, Ian Steel, Bob Maitland, Tony Hoar, Bernard Pusey, Stan Jones, Dave Bedwell, Bevis Wood and Ken Mitchell.

The race was conducted that year over 22 stages totalling 4,495 kilometres, describing a full clockwise loop of the perimeter of the ‘hexagon’ of France, starting in Le Havre and finishing in Paris. Of the 10 men who started, eight succumbed to crashes, heat, saddle boils and time cuts but Robinson, displaying the class and ‘grinta’ which would eventually win him two Tour de France stages and the GC in the Dauphine, finished a credible 29th overall. Hoar however was in the lower reaches of the classement, finishing the race as lanterne rouge.

He explained that it wasn’t so much his sliding down the standings, more those behind him dropping out that accounted for his being ‘stuck’ at the bottom of the pile; he’d find himself six or seven places off the cellar in the standings, only for all these riders behind him to abandon. His ride was, in its own way, as much of an epic as winner Louison Bobet’s third triumph in the race.

The team had been supplied with Dunlop tubulars, which in those days before synthetic rubber became the norm had to be matured to allow the treads to toughen up; no such thing had been done and the riders suffered from a plethora of punctures before changing to Pirelli tyres. Hoar crashed in an unlit tunnel, suffering multiple abrasions, missed the time cut but was reinstated to start the next day in those pre-UCI ‘rules about rules’ days. He also witnessed first-hand, the dramatic, drug-induced collapse of Jean Mallejac on Mont Ventoux during Stage 12 of the race, in a portent of events to come a dozen year hence on the Ventoux when Tom Simpson collapsed – but unlike Mallejac, the Englishman did not respond to efforts to revive him.

Being a well-built man Hoar suffered more than most on the Alpine and Pyrenean ascents but quitting was not on the agenda and when the race concluded in Paris he was Britain’s second rider to finish ‘the Grande Boucle’ – Robinson being the first. In the final sprint in Paris he was careful to allow Robinson the accolade of crossing the final finish line first.

The lantern rouge brought him some much needed revenue in the form of criterium contracts with a ride in Paris the day after the Tour then five races in seven days in Belgium. That season he also started the World Road Race Championship at Frascati in Italy, a 293 kilometre epic with winner Stan Ockers of Belgium timed at 8:43:29. Hoar did not finish; but then neither did former champions Briek Schotte (Belgium) and Fausto Coppi (Italy) and future champion, Andre Darrigade (France). In 1956 he started but did not finish the Vuelta with a cobbled together Swiss/GB team and quit the sport, disillusioned. 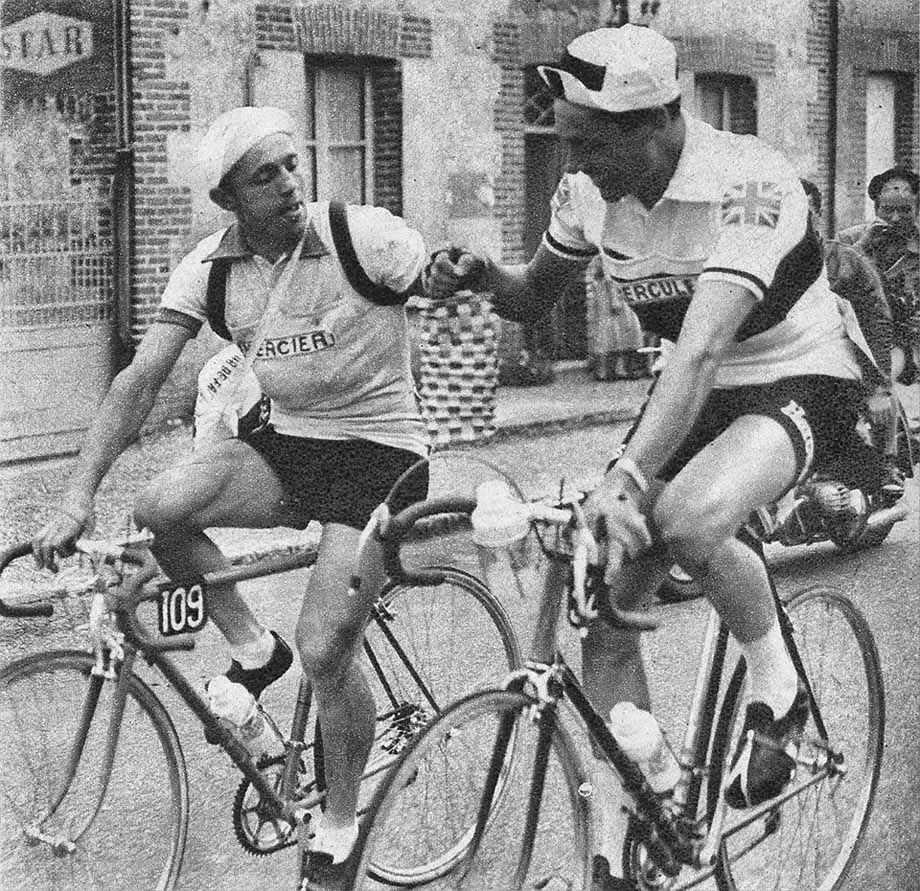 He moved to Canada, a country which he’d fallen for during his trip to the 1954 Empire Games in Canada; where according to his friend and fellow ex-pat Gus Patterson, he worked for the Singer Valve Company in Vancouver for whom he traveled the world.

Moving to Vancouver Island he raced as a veteran, many years after he’d pulled out of the Vuelta, organised races and was a well-known and respected member of the British Columbia cycling community. He went on to set up a business custom building bicycle trailers and racing wheelchairs – he did all of the design, metal cutting and welding himself. Every trailer was built to the client’s individual requirements whether for camping, shopping, hauling your kayak – or dog. He also built wheelchairs for athletes like Rick Hansen, champion wheel chair basketball and volleyball champion. Tony Hoar, racing cyclist of quality, Tour de France lanterne rouge, skilled and innovative engineer, rest in peace. 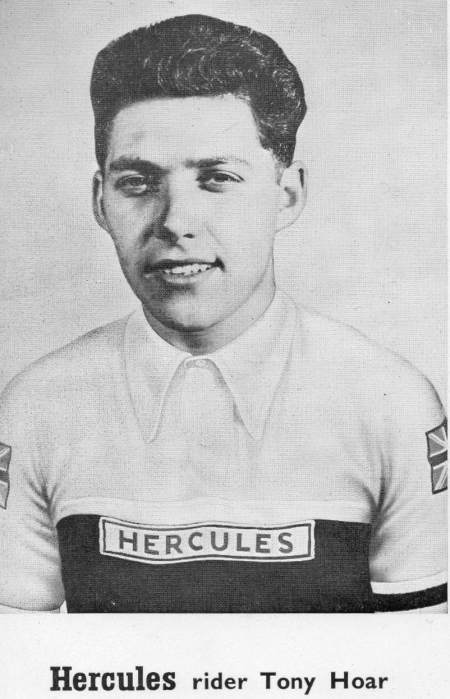 Thanks to the unknown photographers.