When you get an invite from the nation’s premier component maker to join a metric century in wine country that is fully catered, you grab the clean kit off of the top of the pile, a buddy, and you GO! Read on about the day at the Chris King Gourmet Century…

Rolling down to McMinnville, Oregon last weekend, with my friend Lana Pressey, we were excited, but also filled with a mild degree of trepidation. Sure, we were headed towards some great riding roads, which were to be catered with excellent food stops, but the skies were grey, check that, black, and heavy with rain and lightning. Undaunted, and perhaps somewhat driven by the promise of such good food along multiple stops (not to mention about 15 top notch wineries), we pressed on, bikes in the back of the truck like nervous ponies in the stable.

Chris King Precision Components was holding their Gourmet Century, a 63 mile jaunt on some of the best roads one can ride about an hour southwest of Portland, Oregon. It’s the signature event on the calendar for the company, thanks to owner King’s love of food (really really GOOD food) and entertaining. We had to graze what was left of breakfast as were a little late in getting started and needed to be out on course. 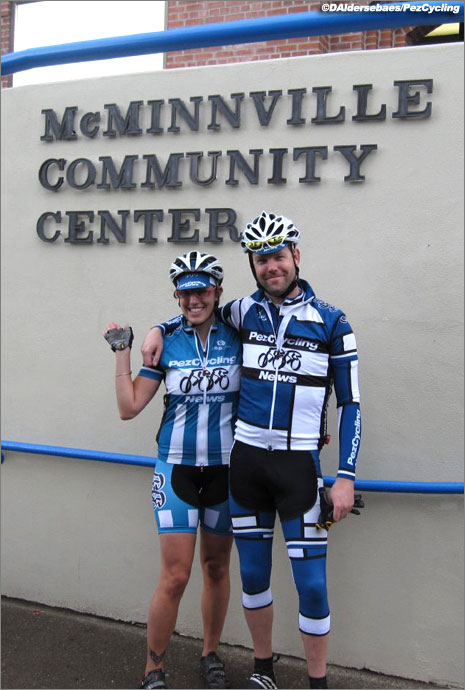 Dave and Lana at the start.

The ride began as the skies gathered ominously above us. We managed to stay dry for about the first 5 miles before the spigot was turned on in earnest and shortly thereafter we were drenched to the bone. Looking down at my computer, I thought, “Well, there’s another 50 some-odd to go, but only about 5 to the cookie stop!” We arrived at the first stop to find riders huddled under a pavilion, munching cookies and loading up on water. Almond, date butter cookie & Butter cookie with fig sprinkled with powdered sugar were your choices. We could tell from this moment on, rain be damned, this would be worth every second.

A quick stop to hydrate and wait out the worst of the rain came next, and then thankfully the downpour morphed into a spittle, then up and quit altogether. And it was only getting better, as the rain abated right as we pulled into the lunch stop. We woofed down delicious chicken empanadas, accompanied by an arugula salad with tomatoes and drunken goat cheese. Oh yes, along with some delicious almonds and olives on the side. 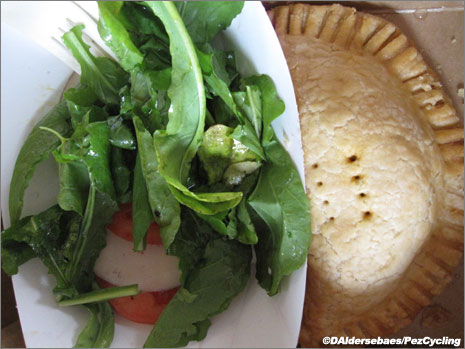 It was at lunch that we ran into our friends Heidi and Sal, and Danny and Nate. All in one form or another involved in a journalistic exploit. My colleagues at Pez I am sure can attest that when you get a bunch of cycling writers together and sprinkle the lot with wine, good times are ahead. This was no exception.

Our new sextet formed and headed out as the rain gave us a last dousing in its death throes. We meandered through gorgeous quiet roads winding through Oregon’s vaunted wine country. We resisted the urge to stop at the wineries along the way, even though the signs saying “open” and “tasting today” were beckoning with their best come hither looks. We knew ahead there was the much vaunted dessert stop which was at a winery, so on we pressed. Arriving at the next stop we found wine, heaters under to which to dry and warm ourselves, and olive cakes with fresh cream and dates. Was this heaven? 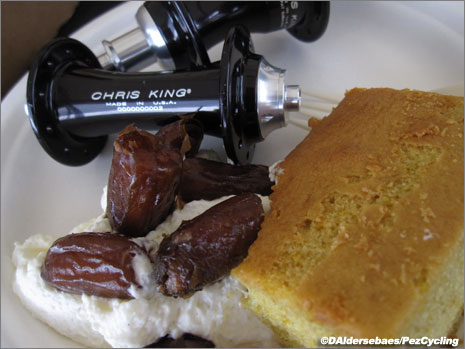 We hung around here a little bit longer to enjoy the warmth and our friends, and took some time to make some new ones. Something about food and wine and bikes and warmth just all go together really well, don’t you think? 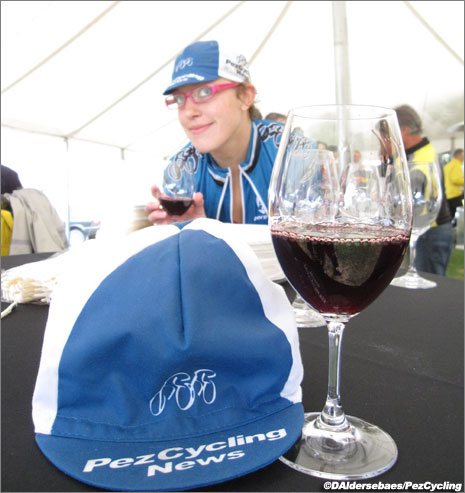 And all at once, filled with dessert goodness, the skies broke open and bathed us in glorious autumn sunshine. And the smiles just got wider from there. 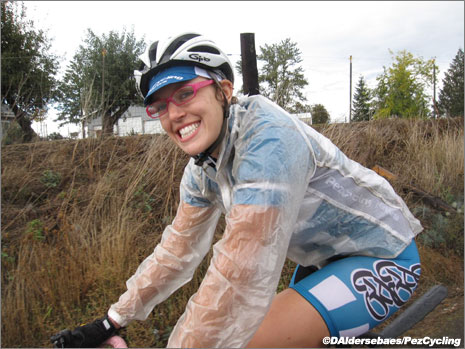 A short roll later we came upon a veritable funland of skate ramps and dirt jumps, seemingly carved out of someone’s lawn in (I believe) Carlton, Oregon. It was here that a lesson was learned – high end racing road bikes can’t do what BMX bikes can do. Being one to try almost anything once, I gave it a go on one of the skate ramps, and in true fashion ended up on my ass, laughing. 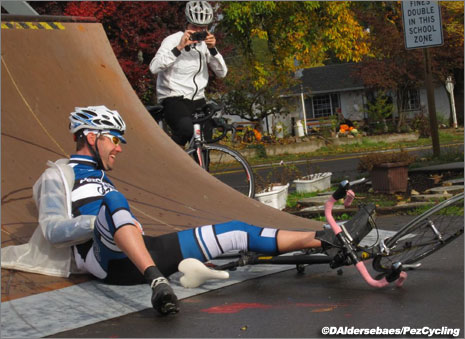 With sun overhead and Oregon’s lush beauty before us, we rolled easily on towards the dinner stop, making sure to take in the scenery and shoot some pictures along the way. There were many a joke told and many a belly laugh to be had. We managed to roll into the last quick pit stop, where we were treated to some non-alcoholic sangria, and more excellent cookies.

By then the siren song of the dinner plate was growing to a deafening roar, so we mounted up and made short shrift of the remaining 10k or so. A joke about sprinting to the end was made, which in turn provided an excellent photo op. 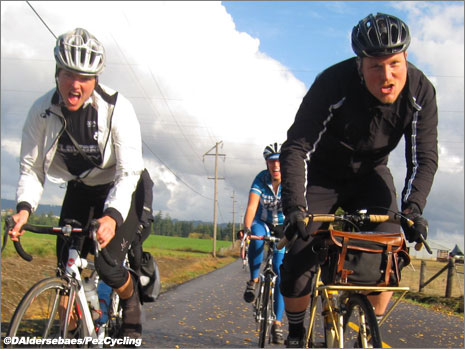 Heidi and Daniel “sprint” towards dinner.

One thing was for sure, everything about this ride was worth it. Brilliantly planned and flawlessly executed, I can’t help but heartily endorse this ride if you can fit it into your plans next year. I mean, who wouldn’t want to see scenes like this? 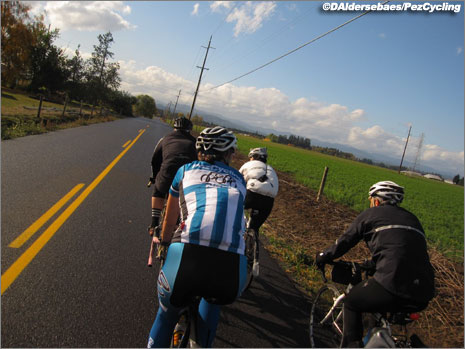 The open road and broken sky.

A few more twists and turns and we were headed southbound back towards McMinnville, and our chosen entrйe of sherry braised beef short ribs w/root vegetables over scallion mashed potatoes. There was a vegetarian eggplant option, but our table unanimously waged war on the ribs. 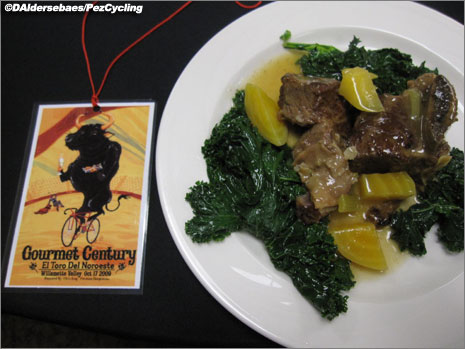 A hearty thanks to the Chris King company and all the volunteers that made the ride possible. That was a truly excellent way to spend a Saturday!

• Get more info on great components and upcoming events at ChrisKing.com