Last week in Georgia I had the good fortune/ misfortune to ride the Stage 5 route from Helen to Brasstown Bald – the highest point in Georgia. I’d heard this climb was tough, but really had no idea what I was getting into. When this sucker pitches to 20%, the ol’ pain-o-meter goes off the scale…

The road is a gently rolling climb from Helen, that after 8 miles turns left and starts up the 4 mile Unicoi Pass. The grades are not bad, around 5%, and the group I was with – a few journos and folks from LeMond bikes – including Greg LeMond himself, held a conversational pace. 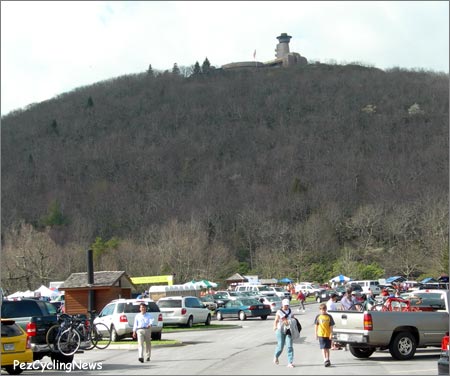 Somehow, some way, you gotta get up there.

The ride over Unicoi is nice wake-up call to the climbing legs, and the roads were smooth and quiet. The descent off the back offers good time to recover, and then you turn left off highway 75 and begin a gently climb to Brasstown’s base.

The run up to Brasstown gets gradually steeper the closer you get, but our group stayed together at a comfortable pace. The road up the climb was closed for the next day’s race, so our hosts had arranged access with the park rangers, who waved us through the gates. 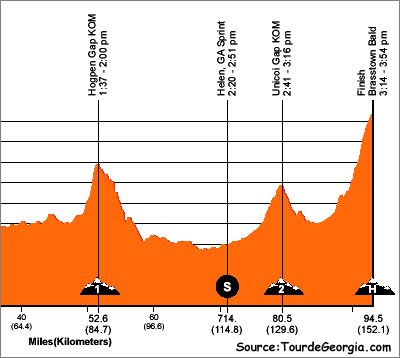 The real nasty bit is 3 miles long, but there’s another 5 or so miles of climbing just to get to the start.

The Going Gets Tough
The grade immediately kicks up to 8-9%, and it seemed that what little momentum we had was best used to roll straight onto the climb and getting on with the task of ascending the next three miles.

At this point I noticed that what passes for a compact crank is open to interpretation – even though our bikes had been fitted with 36×27 climbing gears – (ed note: to those of you who’ve ridden this climb – you know what I’m talking about – for those who haven’t don’t laugh until you’ve tried it!)
we’d soon be crying for more granny…

Straight up – this climb is a bee-yotch: it starts steep, gets stupid steep, and finishes hurtin’ steep. The first mile was not too bad (if taken by itself) – I was able to turn the gears over at a cadence somewhere close to what I normally use, but I wondered how long I’d last. It’s hard work, and my strategy of ‘pace myself’ seemed to be working as I slowly moved to the front of our group. This is not to say I was faster than the other guys… more like they just happened to be better ‘paced’ than me…

As we passed through mile 1, a dense cloud cover hung atop the ‘Bald that snatched away any distractions the promised views might afford. 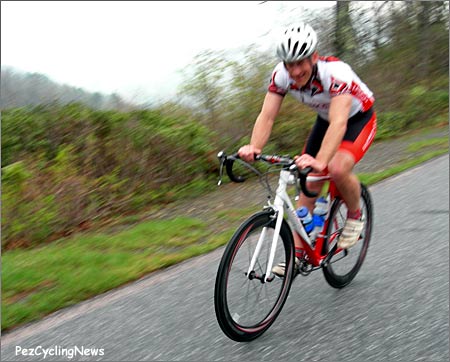 On the short flat section after mile 1, everything starts to get blurry – even LeMond marketing guy Dean Gore.

Somewhere in mile two is the famed 20% section. “Yeah right” I thought… we’ll see how steep they think 20% is… I’d stopped to snap a few pics back at the flat, and now was catching back on to the group, which by here was splattered all over the mountain like the bugs on our van’s windshield…

The second mile is the worst – it starts just after a short flat section, but kicks almost vertical at a right hander, as you round the corner, the true steepness smacks you in the forehead – looking up through streaks of sweat on your glasses, all you see is a narrow road climbing into the sky.

A mile is a long way… 1600 meters long… but even longer when confronted with pitches of 15-20%. The talking stopped way back – somewhere in mile 1, and now it was pure survival. You don’t want to get off and push… especially in front of other journos… but on a climb like this you’re confronted with certain choices:

• get off and push (live to fight another day)
• watch your knee caps separate from your body in a similar but much more painful jack-in-the-box fashion – like so much civil-war cannon fodder
• suffer cardiac arrest and die (manly yes, but lacking the benefit of point #1.)
• all of the above 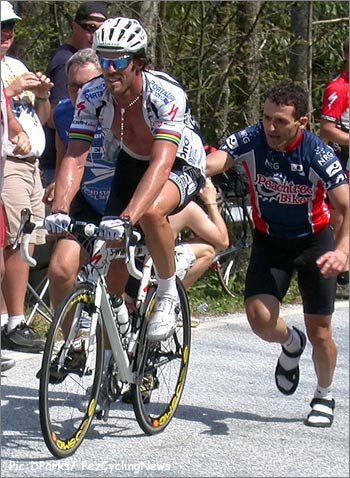 The thing about being a pro is there’s always a push nearby.

Looking up the road was an ugly sight – guys were walking, guys were weaving, and some just weren’t moving at all. This was a group of accomplished riders with lots of racing experience, yet the sight of grown men walking their bikes while their cleets slip and slide more closely resembled Peter Sellers in that steam-room scene from Return of the Pink Panther… only not as funny.

I’d come this far, felt good on the bottom, and just wasn’t about to give up yet. Digging deep was my only option my ego would allow. Then the grade pitched back to the rumored and feared 20%… my knees felt like spikes were being driven through them… my heart was pounding at dance-club volume – just loud enough to cha-cha with the pounding of my lungs as they hoovered in air and several Georgia noseeums … Pictures of my imminent demise filled my vision but luckily I couldn’t see through those glasses…

My forward motion had almost completely stopped – any slower and I’d be track-standing – and I was only halfway to the top. 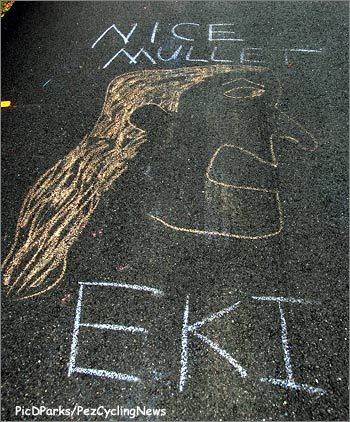 The road to Brasstown is definitely not your friend….

Read All About It!
I had one last option – pull the rip-cord on the trusty (but less manly) ‘paper-boy weave’. I wasn’t the first one to do it, but enough was enough. It even provided some comic relief as Dean Gore of LeMond Bikes and I went mano-a-mano at 2 miles an hour – no talking, just weaving and gasping as we inched our way back and forth through this pitch.

The final mile is steep steep too, with pitches to around 12% – but made so hard by the exhaustion and effort it takes to get there. 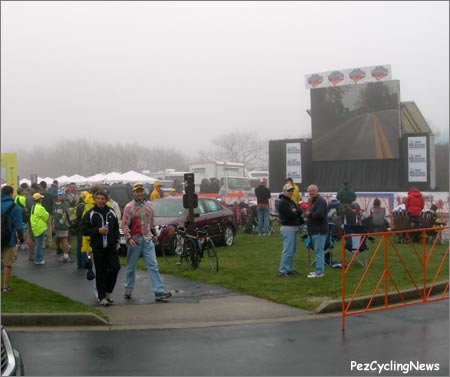 This parking lot is still several hundred yards of torture from the top.

There’s a parking lot about 1200 meters below the top that was clogged in fog. The rangers waved me through for the final kick to the top. I finally caught Matt from VeloNews and Aron from LeMond… but only long enough for a ‘hello-goodbye’ as I blew my last wad and slumped back to one more ‘paper-boy’ before finally clearing the summit some 35+ torturous minutes after we started. 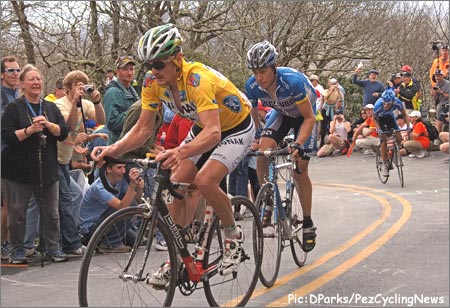 Floyd & Tom pass early break and 2004 Brasstown winner Cesar Grajales as they fight through the final switchback and head up the last super steep section.

That was hard. H A R D. Damn hard. Glad I did it but no need to repeat the experience kinda hard.

Like any great, epic, tough climb – the pain was lessened by the accomplishment – just do it baby. Too bad the fog was so thick we were robbed of the gorgeous views of a clear day. 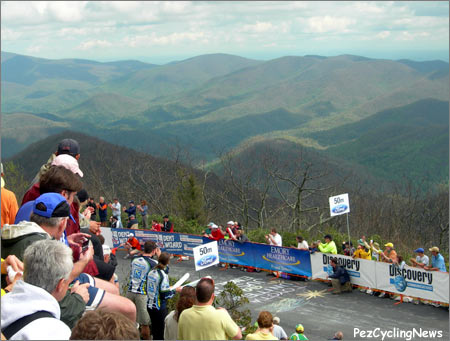 Here’s what you came for, though it’s a high price to pay in sweat even for this view.

If you ever get to Georgia – make sure you go for this climb – the roads are great, the countryside and scenery beautiful – and your appreciation for what the pros do will deepen… considerably.

Postscript: We got this email / testimonial a few days after posting the story:

– Great article.  Wanted to tell ya a little story.  Don’t know if you know this, but back in 1988, 89 they used to do a Time trial at the ‘Bald as part of the Athens Twilight week.  So I have ridden that beast three times.  Once on a recon ride and twice in the Time trials each year.  At that time, not many people knew much about the climb.  So in 88 before the TT me and a local Cat 2 named Mike Hatton rode it on a training ride from Dahlonega.  We had geared 42×23 and thought that would be more than enough.  Ha ha, the joke was on us.  We go to the top, but we had to weave our way up the 20% section.  At that time, I was 145 pounds and considered to be a good climber.  For the 88 TT I used a 41×26 (that was the lowest ring you could put on a Campy Nuevo Record crank).  The TT went well.  I was third in the Cat 3’s and if I remember right, 18 over all in the pro 1,2.  But I still had a rough go on the steepest part.  The funniest thing I remember about that first year was these ding dongs from Florida showing up to race with 21 sprockets.  We told them they were gonna turn around after a mile.  They laughed and said, “nahh we will be fine”  And yup, they turned around saying things like “steep, wasn’t my day, holly crap”  And these were CAT 1,2 guys.  Well, I won’t bore you with more details.  Just thought you might like my story.
– sincerely, Joe Christian