Burned out from too much riding and racing yourself? Then why not read about other people’s rides? Among the most popular rides in Italy are the “granfondi” – which are competitive rides for all levels of riders, over some good distances, followed by lots of wine a pasta… Michele Tomasi recently rode the famous Granfondo Pinarello in Treviso Italy…

Have you ever been dreaming to take part at any race with elite or professional cyclists? Or, just with a big group of peoples who want to enjoy a ride together, in a nice place? Well…here’s another chance to so it – this time in Italy!

A “Granfondo” happens almost every week-end, in many different cities of Italy. The word “Granfondo” means “very long-distance”, and usually it isn’t easy riding, but hilly, and often in very nice places. 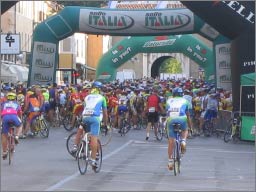 As I just said, the track usually is not easy, I mean…hilly! But if you don’t have the chance to train a lot, or just…wanna take it easy, you don’t have to worry, because you will meet all kind’s of cyclists at a granfondo.

It’s not unusual to see some pro riders, or elite, some Under-23, or just some people who want have fun, and cycling together with their friends slowly, without any pressure. On 21 Juy I was at the start of Granfondo Pinarello, one of the most famous and best organized competitions of this category. It was located in Treviso, and the start was in front of the original, old and very famous shop of Pinarello.

Although these are basically recreational events, riders take them very seriously, and they often look like pro races. You must go to take your numbers, and then prepare your bike, and yourself. With the “race-bag”, you will receive some magazines, commercial propaganda, and swag offered from the sponsors of the event. 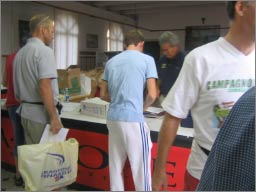 You will need to rent an eloctronic chip, that it will sign your time, from the start until the end, with some “check points” along the roads, for a cost of about $2 US dollars. 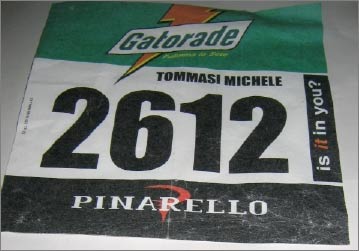 Often that the organization invites some special guest, and at that time, there were many big names at the start! Claudio Chiappucci, Silvio Martinello, Filippo Pozzato, Matteo Tosatto e Mauro Facci of Fassa Bortolo; a mix of champions of the past, and pro riders! 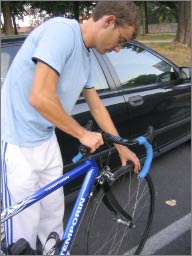 Usually the participation is very high, and in this case there were around 3100 people, just waiting for the start. 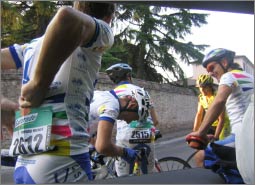 I chose the shorter route, 128kms, and so I started after the group who did the longer one, 202kms. The race was hilly, but along the road you will find some tables, prepared by the organizers with many good things: jam, fruit, sandwiches, water, tea and so on. Everything that you could need!

Of course I didn’t stop at all of them, but sometimes, as everybody, I did.
Many people use it as an excuse to stop, and exchange a word with the other friends. 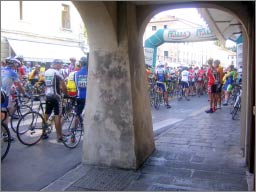 When you finish the race, you have the chance to eat something, included in the race fee, like a plate of our famous pasta and a drink. Usually, you will be able to see the ranking of your race after 20-30 minutes from the end of the winner. 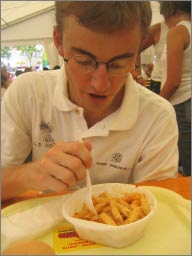 At the end of your race, perhaps you’ll be tired, but satisfied and happy, and you won’t be able to wait for the next one chance to run in a so great event! 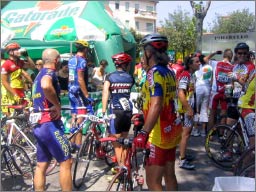 For more information, take a look at the website www.granfondopinarello.com .