On an unseasonably warm November day, I had the opportunity to join one of the top time triallists in America: Tom Zirbel, on one of the legendary Boulder rides – the Gold Hill Loop. We headed up into the mountains above Boulder for a fantastic day on the bike…Read On!

– We first ran this piece at the end of 2008. Ed’s recent interview with Tom got me to remembering an old piece we ran a few years back with Tom and PEZ’s Boulder resident, Nathan Rand. A quick scan through the archives – and there it was, wintertime gold. –

Three years ago, my family decided to leave the crowded streets of Southern California for greener riding pastures. In my mind, there really was only one location worthy of calling home for a cyclist- Boulder, Colorado. The People’s Republic of Boulder has long been a lure for countless professional cyclists because of the access to endless Rocky Mountain climbs and a plethora of flat plains. These geographical features, along with the healthy vibe of the town, provide the ideal training grounds for many Continental and European based pro’s. 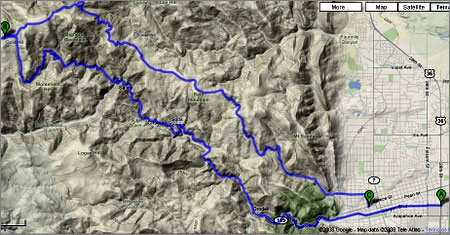 A few weeks ago, I contacted Zirbel after a local cyclocross ride and asked him if Pez could tag along on one of his favorite local routes. Zirbel graciously invited me to join him on a ride and we set a date and route that worked for both of us. In previewing the ride, I was grateful that Zirbel had chosen a climbing route since he was just coming off an amazing season on the flats (three time trial victories and a mere 5 seconds away from the U.S. National TT jersey.)

The Ride
The Gold Hill loop basically has four sections: 1.) the initial Canyon climb, 2.) the scenic Fourmile climb, 3.) 4 miles of dirt and 4.) the screaming fast Sunshine descent. Due to the copious amounts of dirt and likelihood of vast weather changes in Colorado, the plan was to ride our road bikes if it was dry and our cyclocross bikes if it was wet or snowy. We were going to meet in downtown Boulder and follow Boulder Creek up Canyon Boulevard to Fourmile Canyon Drive. From there, the road narrows and consistently climbs up to the town of Salina. Shortly thereafter, the road turns to dirt for the final 4 miles up to Gold Hill. The descent down Sunshine Canyon, and past a certain U.S. road champion’s home, includes dirt and steep sections of pavement, before returning into the heart of Boulder. The reason the Gold Hill Loop is one of the local’s favorite rides is that it is a steady and difficult 11 mile climb with little traffic and a screaming descent.

I originally thought I had a decent chance of keeping pace up the 3400 feet (1030 meters) of vertical climbing with the 6’5” Zirbel since it’s technically the “off season.” After all, I had ridden the climb up to Salina endless times this past summer as my mid week lunch ride and knew the changing pitches well. However, not to leave anything to chance, I put on my race wheels, compact chainrings and prayed I did not embarrass myself.

When the day finally arrived, the weather cooperated with a beautiful mid 70’s (24 C) sunny day. There would be no excuse of riding the slower fat tired cyclocross bike today. Zirbel rode up wearing his team issue Bissell kit and was riding last year’s Pinarello Paris. I was decked out in PEZ gear and a 12 lbs Cevelo R3-SL. After the initial introductions, we headed west on the bike path to get out of town. 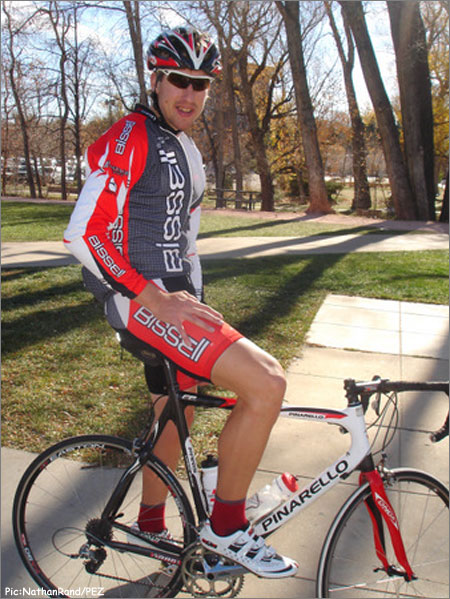 Section 1- Canyon Climb
To my dismay, one of the first things I learned going up Canyon was that Zirbel was carrying a lean 5% body fat; at the end of his “off season!” OK, I thought, the game was over before it even started, I had better play the interviewer role, take some pictures and get him talking about himself and the ride. Maybe I would try and pip him at the final city limits sign after the long descent. The initial climb out of town typically carries some lunch time traffic headed towards the tiny ski town of Nederland, home to Eldora Mountain Resort. We decided to go single file to be safe, with Zirbel taking the lead. The road is truly beautiful and provides the added benefit of seeing and hearing the nearby river. Many locals jog or hike on the adjacent dirt path which follows the river for the first few miles. 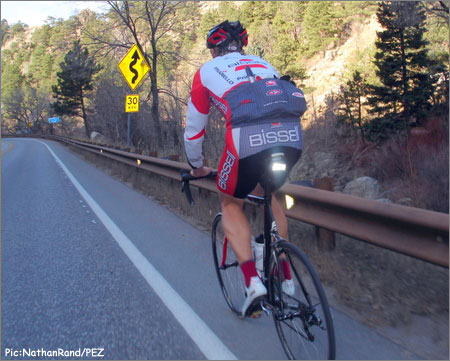 Section 2- Fourmile Canyon
Once we hit the narrower, less travelled right turn unto Fourmile Canyon Drive, we were able to notch it down a few gears and started chatting as if we were old friends. The conversation flowed easily as Tom is the type of laid back guy that I could easily find common ground with. We quickly learned that both of us share a love of the finer things in life: coffee, ice cream and a beautiful woman to spend time with, however, not in that order. 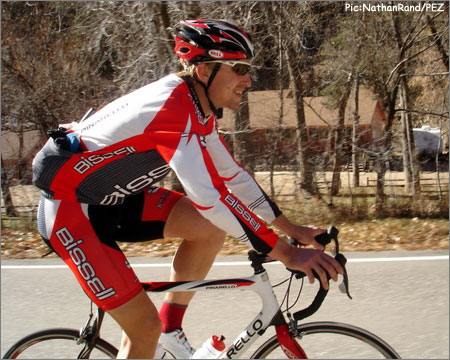 The base of Fourmile follows rugged rock outcroppings that hug the road on one side and a tree lined stream on the other. Tom kept joking that I was putting the hurt on him, when I knew the real suffering was yet to come. This is my favorite section of the entire ride, especially when the fresh smell of douglas fir and ponderosa pine hit my nose. The base of Fourmile is a more gentle gradient and you can really get the big ring churning. However, we decided to keep things slow and gradually made our way out of the autumn shadows and into the steeper, more open sections of the climb. Tom generously took up the conversation as the intensity of my breathing increased. 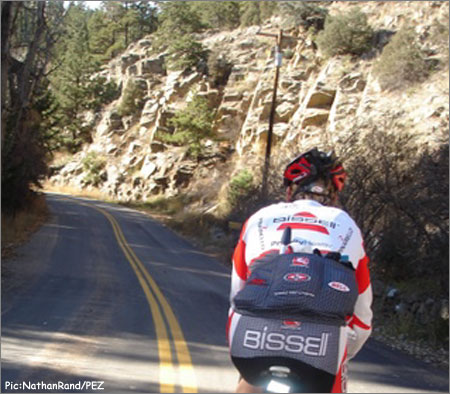 The entire Fourmile climb is consistently hard but there are enough twists in the road and changes in pitch to keep it interesting. There is even a very short downhill section which gave me a chance to take the lead and recover a bit. Before I knew it, we reached Salina and passed a 100 year old church, which has been undergoing renovations for the past year. By European standards, a century old place of worship is not a big deal, but in the rural mountains of the West, its pretty cool. 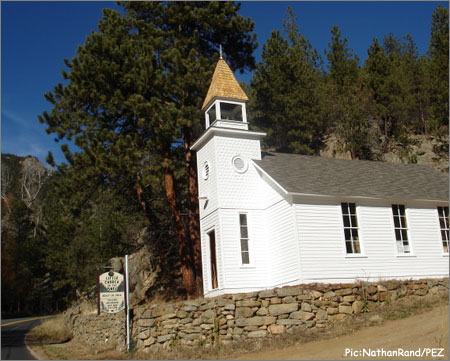 Change of Plans
Soon after the Church of the Pines and Fourmile’s steepest pitches, the road changed to dirt and we stopped for a nature break. At this point in the ride with only 8 miles of climbing, we were both pretty fresh. However, after discussing our options and taking into account a slight wrist injury Tom incurred during a recent cyclocross ride, we decided to forgo the impending dirt descent if we kept going up Fourmile. While I was not disappointed with this change, another road we passed along the way, presented a way for us to still encounter a dirt climb and a more reliable paved descent down Sunshine. The short break also provided a great opportunity for us to talk and for me to get into the head of Tom Zirbel (more of that in an upcoming Zirbel gets PEZ’d interview). 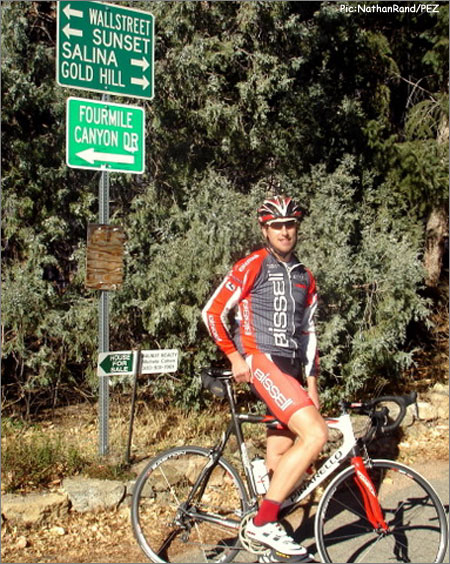 Tom let me lead for the initial descent, but I applied the brakes and put an end to that nonsense since I wanted to use this ride as a lesson on the fastest lines to take down one of my favorite weekly routes. To document this incredible opportunity, I thought it would be cool to video Zirbel down a few of the twistier corners. I cautiously held my brake hood with one hand and trusty compact Sony digital camera with the other. Needless to say, this was one of my dumbest journalistic ideas and he gapped me on the first corner.

Section 3- Dirt
On the dirt climb up Poorman, we ran into some locals and got in an unexpected sprint to pass them. 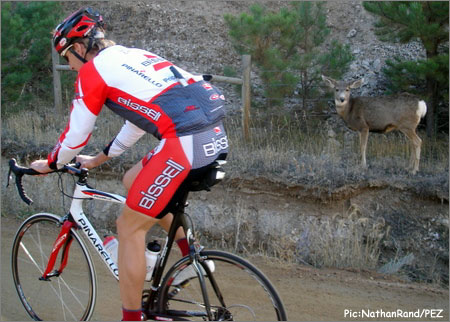 The dirt was not very loose and our road bikes with regular tires were more than adequate for the conditions (I wish I could say the same for my lungs). While I spun in my easy gears, Tom steadily churned those 185 cranks at 70-80 rpms. 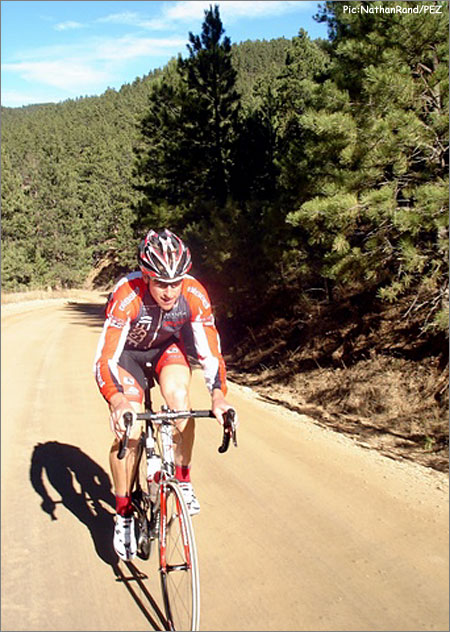 Section 4- Sunshine Descent and City Limit Sprint
After a mile and a half of dirt, we joined Sunshine Canyon for the final descent back into town. From experience, I knew that more than one off camber turn was preceded by a 14% grade, the combo of which requires a steady hand on the brake. Again, I tried to follow Tom’s line through the corners and in the process, learned his secret to descending- using his massive upper body as a sail instead of riding the brakes. While the same secret doesn’t necessarily apply to my frame, I was surprised to be able to keep up with him through the corners. In fact, I had to stay close if I wanted a fighting chance of winning the city limits sprint at the end of the ride. As we approached the bottom near Boulder Medical Center, I shamelessly drafted off Tom, hoping to conserve enough energy to muster a decent sprint. However, as I started to come around him (while spinning out my 50×11) I had second thoughts. Maybe it wasn’t “cool” to take on a pro in a friendly ride under the auspices of cycling journalism.

Any indecision I had was instantly wiped away when I heard Tom groaning loudly and flailing his bike next to me- feigning a dash to the line on the Champs Elysees. Ever the jokester, Tom slammed his hand on the bars in disappointment while I laughed off my thoughts of actually beating him at 45 mph sprint.

We rolled to a stop for a few pictures and I presented Tom with his very own PEZ cap.

When Tom explained he didn’t have a chance in the sprint due to my lightweight bike, I offered to let him ride my bike since we both use Speedplay pedals. Like those classic last day of the Tour photos, 6’5” Zirbel saddled up on my 54cm Cervelo and 5’9” PEZ writer got up on Tom’s 59 Paris. Once again, I chased him down and we shared a good laugh. 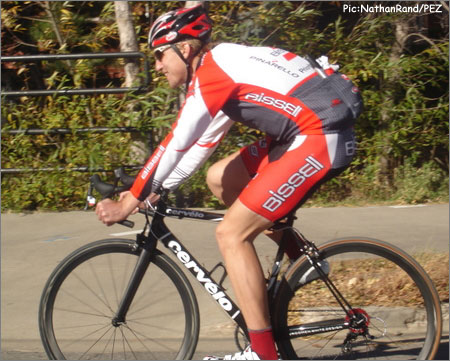 Before Tom rode away (on his bike this time) for another few hours in the saddle, we promised to meet again at a local coffee shop for a real interview. Although we didn’t do the entire route as planned, it was a great ride with a new friend on a warm day in November. You couldn’t ask for more than to Enjoy the Ride. 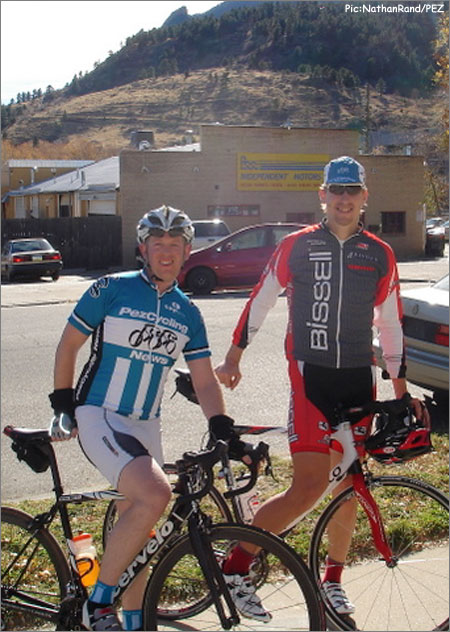 Stay tuned for the upcoming Zirbel gets PEZ’d.