With Silly Season Part I (Team Transfers) winding down, Silly Season Part II (the Grand Tour route announcements) is winding up. The first tour to announce is generally the Tour de France. PEZ sources recommend Alpe d’Huez as a good bet for an Alpine finish…but the actual route is officially a closely guarded secret. 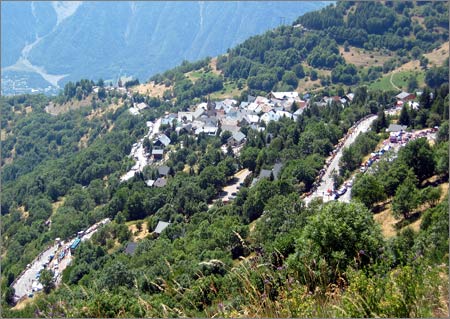 Here’s what we know… The logistics of moving something as large as the tour and its entourage in and out of small French villages requires that some arrangements, like hotels, be made in advance of the announcement. Otherwise, racing fans might book all the hotel accommodations in the village leaving the teams and the rest of the entourage shopping for camper vans. So route rumours spread if you know the local hotelier.

So what are those rumours? First, the tour usually changes directions every year. This would put the Pyrenees ahead of the alpes. That means the race should hit the alpes around, umm say, July 20. Second, the race generally arrives at the Alpe d’Huez every second year. Recently it has made neighbouring ski station ‘les Deux alpes’ the mountaintop finish in the other year. While not as famous or as difficult as l’alpe d’Huez, it has had some memorable finishes. Most notably in 1998 when climbing superstar Marco Pantani dropped yellow jersey Jan Ullrich on the col de Galibier and went on to a dramatic solo victory at les Deux Alpes.

But alas, a wee friendly rivalry exists between the two villages. Not just for the economic benefit that the Tour brings with it, but more for the prestige that the race holds in every French heart, particularly those beating atop l’Alpe d’Huez.

So how does le Society du Tour de France resolve this dilemma? Here’s an idea. What about a stage from southern France and ending at les Deux alpes? And so it doesn’t repeat the route of two years ago, why not take it over the difficult southern pass of the col d’Izoard? But where does that leave the legendary climb of the alpe d’Huez? Hmm, what about a time trial from somewhere say 45km to the east, direction Grenoble, and ending atop l’alpe’d’Huez?

After all, it’s a very special tour. The Ullrich – Armstrong duel could be decided here – fin du tour. Another page of lore etched into the history of the Tour and the alpe. After all, this is no ordinary tour. The Golden Fleece is at stake – for the sixth time…

Vuelta Tales: A Mountain Too Far?