The PEZ TOUR Awards: Every big event has an award ceremony and so we can’t let the 2018 Tour de France pass by without ‘The PEZ Tour’18 Alternative Awards’ by Sam Larner. Sam assures us he didn’t miss one pedal stroke of the Grand Boucle this year and so is in the perfect position to be the Grand Master of Ceremonies. 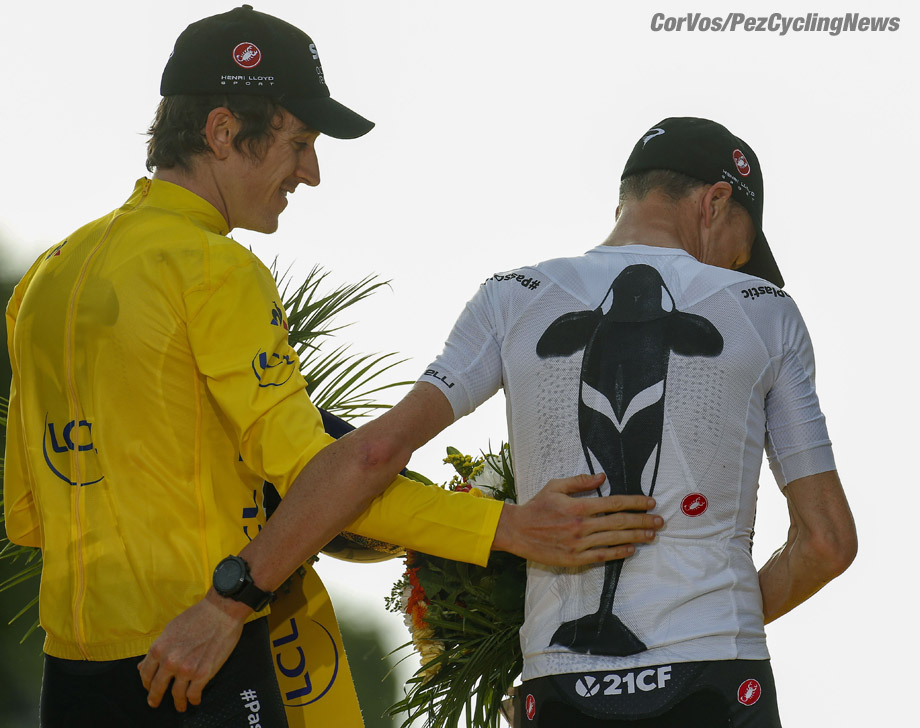 “Sorry Chris, no PEZ award for you and get your hand off my ass. Dros ben llestri, Chris bach!”

Was the 2018 Tour de France a good one? It was better than 2017 but we’re still some way off a classic Tour. The Tour remains under the stranglehold of the Sky team and although it’s a great example of how to best use your team it does somewhat take the excitement out of the race. Still, Geraint Thomas was a deserving winner and even an underdog considering Chris Froome was the primary leader for the British team. Still, at PezCycling we reward more than just the winner of the race and we continue that with the annual Tour de France awards. 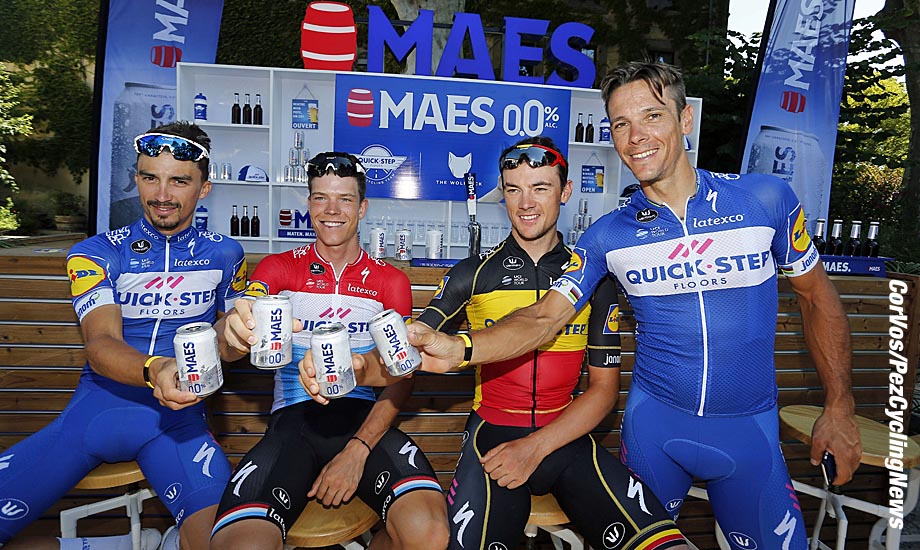 The beers are on PEZ!

Four stage wins, two apiece for Fernando Gaviria and Julian Alaphilippe plus the King of the Mountains jersey for the Frenchman, this was a very good Tour for the Belgian team. Gaviria won two stages in the first four days and then went quiet after that, if he could’ve made it through the mountains it’s hard to imagine that he wouldn’t have added at least two more stages. The yellow jersey for the Colombian was an amazing reward on his first ever day at the Tour and he looks set to follow in the footsteps of Fabian Cancellara and the Swiss’ illustrious career. Bob Jungels snuck in a little 11th place overall to add to the team’s overall success. 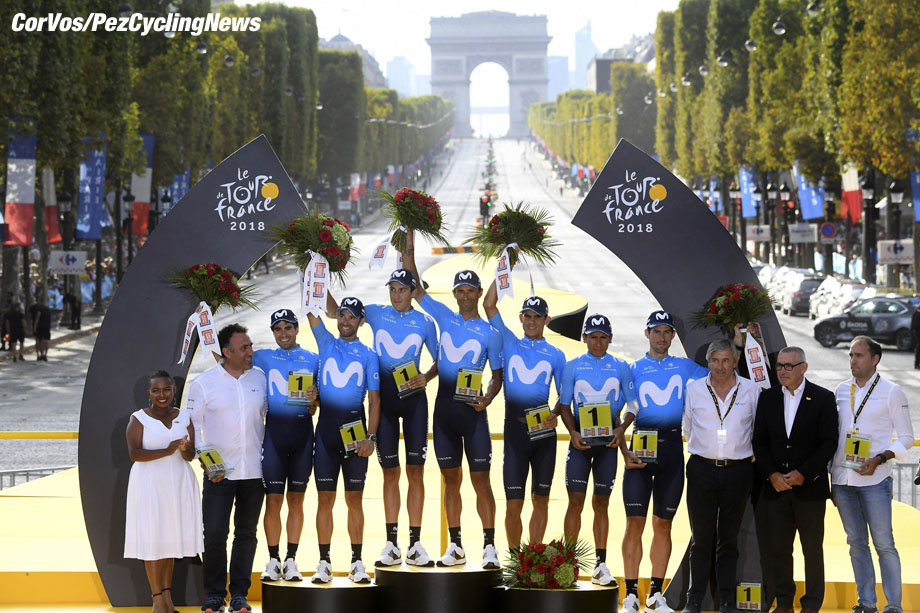 Nobody thought the Movistar tactics of three leaders would work, and they didn’t. Alejandro Valverde turned out to be the de-facto support rider for Mikel Landa and Nairo Quintana which meant that we were soon down to just the two leaders but then they took it in turns to have off days. Quintana has failed at the Tour for the last two tries and is quickly putting together a reverse career, he finished on the podium in his first three attempts and has finished in double figures the last two years. Mikel Landa never really looked like he was going to do anything that special and he happily fulfilled the role of last man to unhitch from the GC group on his way to a low key 7th place. It turns out that if you show up with three second rung overall contenders you’ll win the team classification but that’s about it. 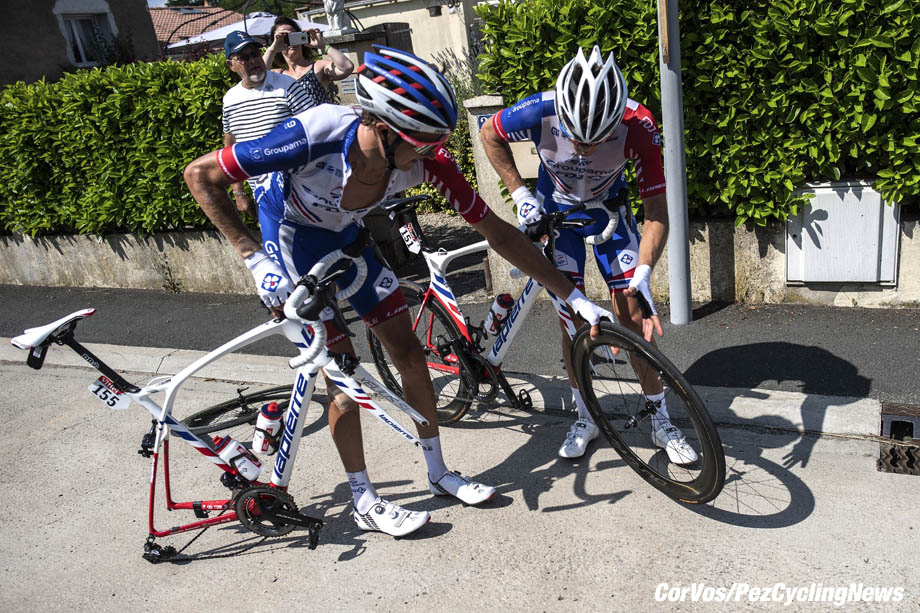 Groupama-FDJ – Not the worst

It wasn’t a terrible Tour for the French, they took three stage wins but it wasn’t a great race for the French teams. Warren Barguil took part in the polka dot jersey race until it became clear that Alaphilippe was streets ahead. Cofidis had some noteworthy results with Christophe Laporte in the least contested set of sprints ever to occur at the Tour but they are now ten years on from their last Tour victory, that’s woeful. Anyway, Groupama-FDJ win this award for the very fact that they took a stage win, admittedly when every other sprinter had gone home, but beggars can’t be choosers. 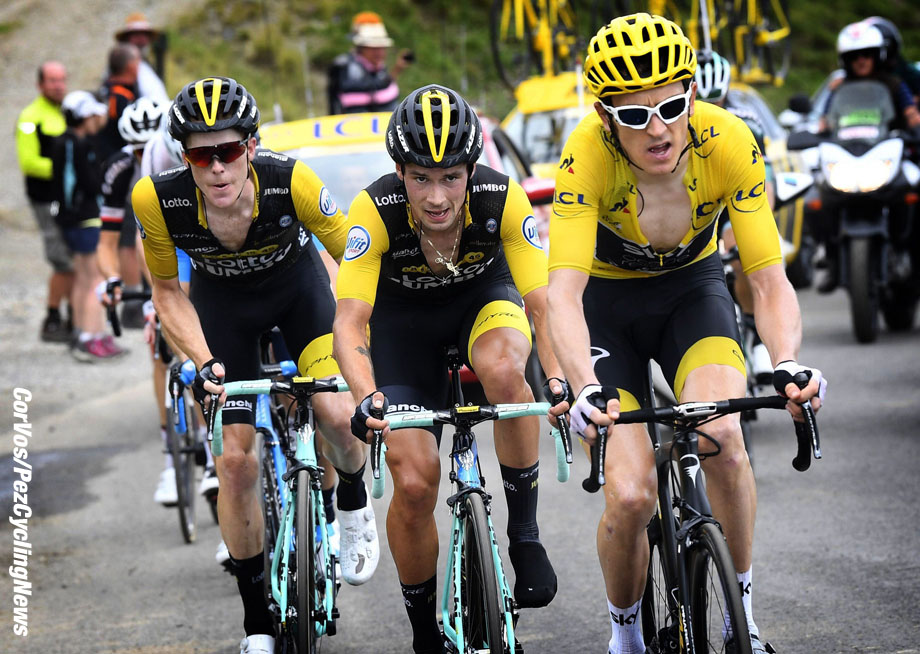 LottoNL-Jumbo – What a surprise!

The Surprise Team of the Tour

Well then, how do you turn Primoz Roglic and Steven Kruijswijk into podium contenders at the Tour de France? Not only that, but how do you also then get three stage wins? LottoNL-Jumbo really were the surprise package of the Tour. Roglic and Dylan Groenewegen have 19 wins between them this year and they continued the trend taking all three wins for the team at the race. Groenewegen was another sprinter to leave early but he is making strides into the upper echelons of the sprinting World. The best part of the race though was the spectacular third week of Roglic. The Slovenian was spectacular up until the penultimate day when he fell off the podium after a disappointing time trial. Great things await him surely. Kruijswijk was the forgotten third member of the band but after getting so close to the 2016 Giro d’Italia title it was great to see him lighting up a Grand Tour again. 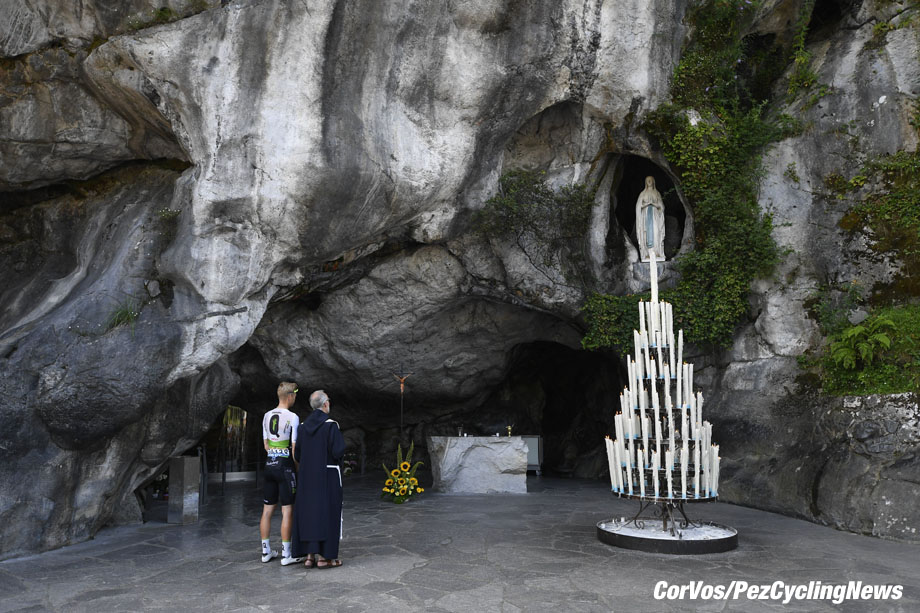 The Worst Team of the Tour

How do you solve a problem like Dimension Data? UAE Team Emirates were going through a tough time but they had the quality of rider to emerge from the doldrums at any point, I don’t know if Dimension Data have that. Louis Meintjes is a legitimate contender at any Grand Tour but I’m using contender to mean someone who can finish in the top 10, I would be exceptionally surprised if he ever makes it onto a podium. Mark Cavendish is nearing the end of his career and Edvald Boasson Hagen is still in his early 30s but has never been a prolific winner. This Tour was very poor for the African team and they need some serious changes if they’re going to pick up more than just a handful of wins each year. 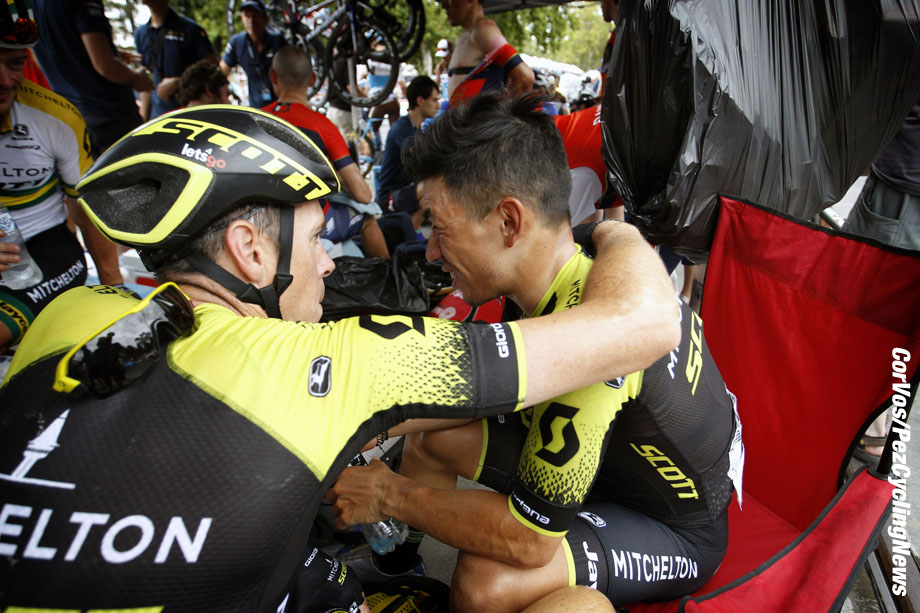 “Not this year Caleb.”

They Should have Picked a Sprinter Award

Mitchelton-Scott decided to put all their eggs in Adam Yates’ basket and so decided against taking sprinter Caleb Ewan to the Tour. At Le Grand Bornard the British rider was tied with Chris Froome on time and the decision to leave the Australian pocket rocket at home was justified. Yates fell out of contention on the way to La Rosiere and didn’t stop falling. He was able to muster some challenges for stages late on but not enough to be a successful race. Maybe Ewan wouldn’t have won a stage, but he might have hung around long enough to take advantage of the sprinterless last week. 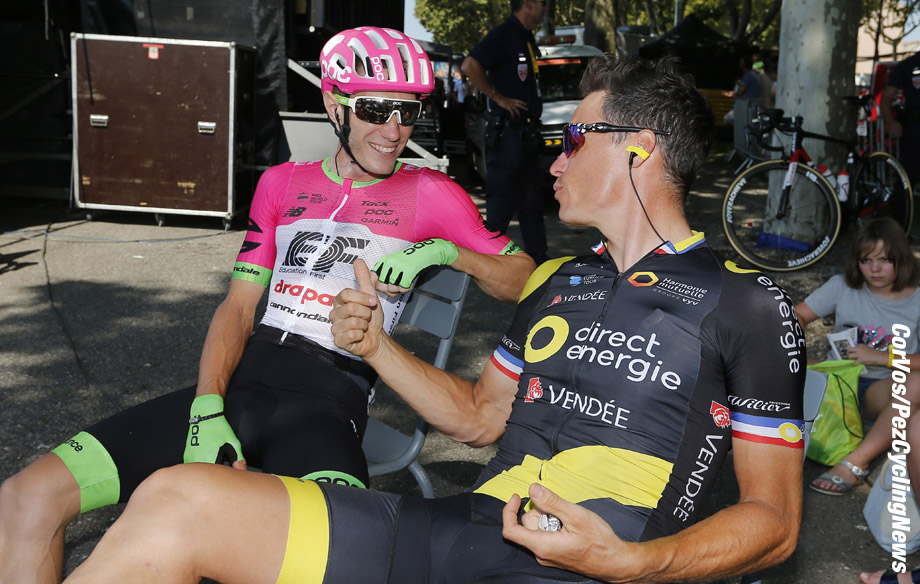 Chavanel: “I’ll be retired soon, Pierre.” Rolland: “What Sylvain? Thought you already had.”

Did you lot ride then? Award

How to win this award? Get into a few breaks early on and then go AWOL for the rest of the race. Sylvain Chavanel did a bit in the first week when nobody cared who was in the break but he wasn’t backed up by his team. Lilian Calmejane was the best place in the yellow jersey battle but he was way down in 30th more than an hour behind. It’s slightly bizarre that Jonathan Hivert wasn’t selected in the squad after he was so impressive at the start of the season, he could have done relatively well in those early hilly stages. 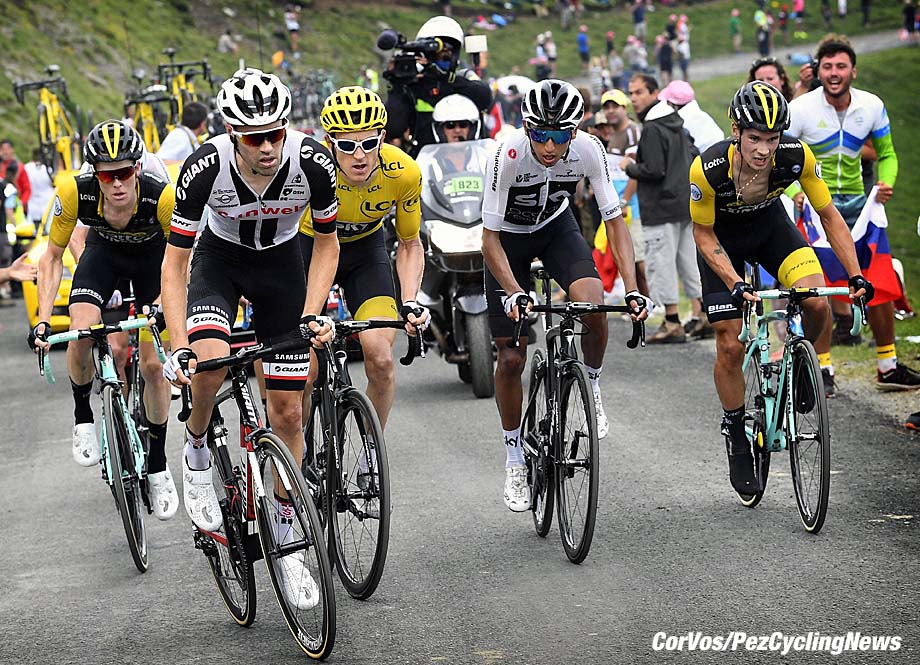 Sunweb/Tom Dumoulin – A one man band

The One Man Army Award

It was reported that Team Sky spend 30 million euros a year or twice what Sunweb spend. The most shocking thing about that is how Sunweb get to 15 million euros with their team. They have six victories this season and five of them are at a World Tour level so it’s not terrible but it’s not good enough for that level of investment. Tom Dumoulin should be used to riding around in the mountains without any support but apart from La Rosiere where he had Soren Kragh Andersen with him he’s never had any support on the last mountain of the day and he’s had to do so much work. If I was in charge of Sunweb I would be opening my cheque book as far as possible to try and attract someone for the mountains so Dumoulin doesn’t have to do it all by himself. 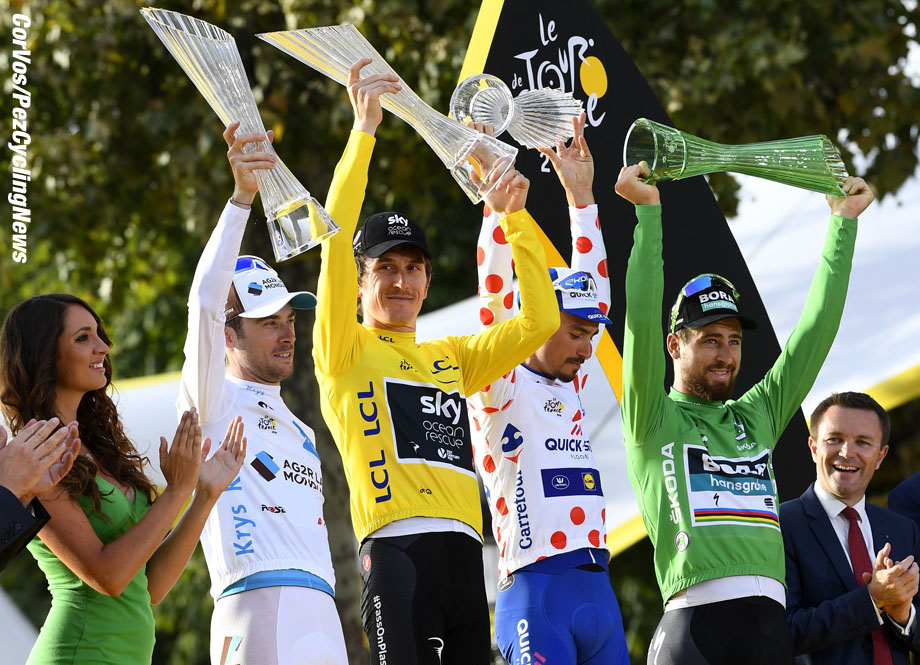 All the ‘proper’ awards