PEZ Tour Bookshelf: The highest drama in the Tour de France takes place in the mountains and the changing beauty of these alpine landscapes differentiates pro cycling from all other sports. Another differentiation is that amateurs can themselves cycle these routes, even on the day the race comes through. Try that at the Superbowl or the Indianapolis 500! “Tour de France Climbs from Above” is an excellent introduction to the legendary climbs, not only from the historical standpoint but for someone planning to experience the roads themselves. 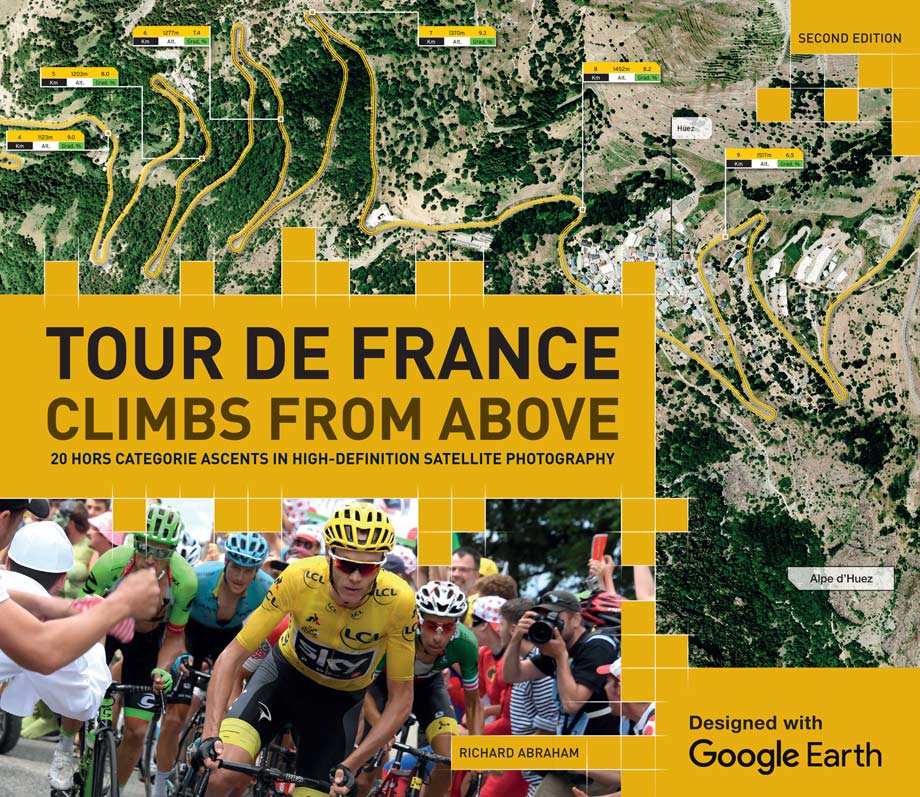 Living as we do in the digital world, Google is omnipresent, not only as a search engine but also a useful route planner. In addition to the traditional maps, Google also provides high-resolution satellite images that allow you to zoom down and check out that hidden road through the forest. Cycling expert Richard Abraham has compiled a lavishly-illustrated book that tells you exactly what to expect either as a fan alongside the race or riding the great cols on your own.

The Tour de France originally avoided the mountains, which were seen as just too demanding for the technology of 1903, but by 1905 the first climb, the Ballon d’Alsace, was included. By 1910 the organizers (who were rather sadistic) had decided to make the racers drag themselves across the Pyrenees and the rest is history. Climbs have been added over the years—the Alpe d’Huez was only included in the itinerary in 1952—and some have been dropped for logistical reasons but the mountains remain the determining factor every year at the Tour.

The book opens with a brief historical survey of the different eras that featured the mountain climbs, from the early, fixed-gear days of dust and gravel to the dominance of Eddy Merckx to the modern era of EPO and (hopefully) post-doping. The photos selected range from 1905 and René Pottier to Team Sky’s multi-Tour champion Chris Froome.

The book is divided into three chapters, covering the classic climbs of the Alps, the Pyrenees and the rest of France respectively. Each sub-chapter deals with a specific climb and the format is consistent throughout the book. There is a nice photo of the climb in question, with a single-page write-up of its story and characteristics. This is followed by full-page spreads, usually spread over two pages but in the cases of bigger climbs, like the Galibier, extending further and featuring the detailed satellite photos of the course, indicating distance, elevation and gradient, as well as an elevation profile. In “Route to the Summit” there is a closer focus on specific elements of the route, such as the fabled “Dutch Corner” on the Alpe. Finally, there is a section entitled “The Mountain Kings,” highlighting four historic Tours where the climb was featured. For example, on the Alpe d’Huez in 1997, Marco Pantani set the record for what is still the fastest time up the mountain: 37 minutes and 35 seconds. This section also indicates how often the route has featured in the Tour, and it was surprising that some of the most famous, such as the daunting Col de l’Iseran, have only been included occasionally—the Iseran seven times, compared to the Galibier’s 59. The wonderful Cormet de Roselend seems to be used only as a transit route between more important stages and the Puy de Dôme, site of the famous 1964 shoulder-to-shoulder combat between Poulidor and Anquetil, seems to be forever off limits to cyclists now.

As anyone knows who has ridden these routes, every col has a different style. The Col du Galibier is simply daunting, the kind of pass where you feel insignificant, lost among the giants. Mont Ventoux is its own special place, between the hot airless forest at the base to the grim moonscape in the second half. One can only love Jean-Marie Leblanc’s description of the Col de Peyresourde in the Pyrenees: “It has a soft grass carpet that makes you want to lie down among the cows and sheep.”

In all, 23 climbs are included in the book, 20 hors categorie ascents, with all the favourites but also including the Col de Sarenne, the “back door” to the Alpe d’Huez and only used in 2013 to make the double ascent of the Alpe possible. While Page 17 has a fine photo of the Lacets de Montvernier, there is sadly no chapter on that climb added to the Tour’s portfolio in 2015.

For those wishing to emulate the Heroes of the Tour/Convicts of the Road, “Tour de France Climbs From Above” is a terrific bird’s-eye-view to help you plan a trip. Useful maps and detailed notes, combined with great photos and plenty of sports nostalgia make it a worthwhile addition to the cyclist’s library. Couple this with the YouTube videos of Michael Cotty’s Col Collective and you will want to buy some tickets and start packing your bike. Who would not want that 1996 Johan Bruyneel feeling? “I flew past that and off the edge of the cliff, and I hung in the air, feeling motionless, stopped in time, a hundred feet above the trees.” 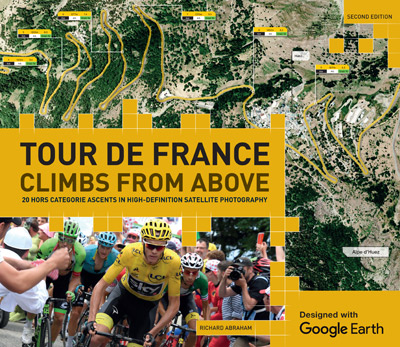 Buy “Tour de France Climbs from Above” by Richard Abraham from AMAZON.COM.