The first batch of miles in Macon have been assimilated by Pez legs, and you get the shakedown from the pavement side of the Tour de Georgia here! Dave Aldersebaes is live on the roadside in Georgia…

Good evening, sports fans. The first stage of the Dodge Tour de Georgia is behind us, and Gord Fraser sits in the leader’s jersey after a hard fought and won sprint on the downtown streets of Macon. A mildly rolling stage of just over 80 miles greeted the riders today under what might be described as perfect cycling skies. A temp in the low 80’s, with just a few clouds dotting the sky watched over the star studded pack as they romped away from, and eventually back to, Macon, Georgia. 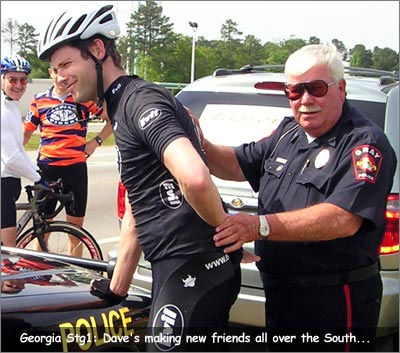 The heat “didn’t really bother” riders like Ivan Dominguez, while some other riders crossed the line utterly spent and seemingly suffering from the temperature. The stage was described by John Lieswyn, at the team’s dinner held at the Macon Crown Plaza hotel, as “a nice leisurely way to start the tour. Until the end, then it got nuts.”

John was referring to the 3 finishing circuits in and around downtown Macon, which were largely controlled by the Domina Vacanze team of super sprinter Mario Cipollini. In the end, it all broke loose after a traffic cone induced crash split the middle of the field, and Fraser took advantage of his team’s work to nab the leaders tunic.

The crowds were deep along the fences in Macon, most leering to catch any glimpse of Lance Armstrong, while some just cheered anybody on two wheels. Myself and tour mechanic Brandon (cheerfully nicknamed Buc Nasty) even received some applause while we rode the course long before the actual racers took to it. The tour has sparked interest from all sorts, men and women, young and old, and it’s obvious. There’s something good and palpable going on here, and it’s only a good sign for stage racing in the US. You can see and feel it; people are excited about bike racing, above and beyond the aptly named “Lance Factor”. 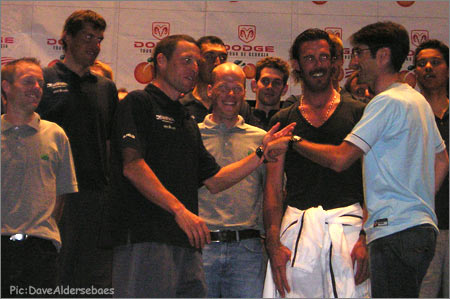 Lance & Bobby wish each other best of luck at the team presentation, much to the amusement of the other riders.

Yours truly was out riding the course early in the morning, getting familiar with state route 22 and a nice rural road completing the circuit back into Macon, after a brief exercise in getting as lost as a jackass in a hogpen in the start town. I never was good with directions. The course was dotted with the likes of cops, barking dogs (one of which a rather homely looking Bassett hound/Dalmation mix), farmers, road workers, and all the while, bright Georgia sunshine and tall pines. As a tagalong with Discover Adventures, the Atlanta based tour group, I am lucky enough to enjoy both top notch support by Tom, Brandon, Joe, Houghton, and the rest of the professional crew, as well as team dinners, VIP areas along the finishing straight, and all the Powerbars and energy drinks my gut can handle. No doubt about it, these Discover Adventures folks got their ducks in a row. Also without doubt is the Tours preparedness. So far, so good.

I am looking forward to the flat days ahead to knock the rust off the legs, and to prepare for the hell coming on Friday and Saturday in the form of mountains named Hogpen and Brasstown Bald. Tomorrow, I am told, is flat. I will opt for the 50 mile course, and ditifully report my findings upon my return to another hotel room, in another Georgia town. Signing off from Warm Springs!

For more ‘tour-of-the-tour’ information, contact
Discover Adventures toll free at 866.44.ACTIVE or visit their specific webpage for the 2004 Dodge Tour de Georgia Tours. Reservation deadline is Friday, March 26, 2004.
Like PEZ? Why not subscribe to our weekly newsletter to receive updates and reminders on what's cool in road cycling?