Our man-in-Milan and squash pro to the stars Dunc Steele checks in with an update on his recent ramblings with the off-bike Andrea Peron, and news on a young coma-survivor’s upcoming 3000km journey across Europe by bike.

It seems the only time I get to hang out with Andrea Peron is when he hits the deck in training or racing and has to take time off. We talk about, women, training, politics and a special Tour that Andrea will be following very very closely.

Our drinking/talk time, in the company of Marco from A-Style and a few attractive ladies, was broken down into certain subjects:

Politics in the Third world
– 18secs

Will the World ever run out of phone numbers?
– 12mins

Can the World actually run out of phone numbers or do they just get longer?
– 12 unsure mins

Do women generally believe they are better looking than they actually are?
– ongoing

“TOUR DE KIM” a story of love sport and value.
– a lifetime discussion 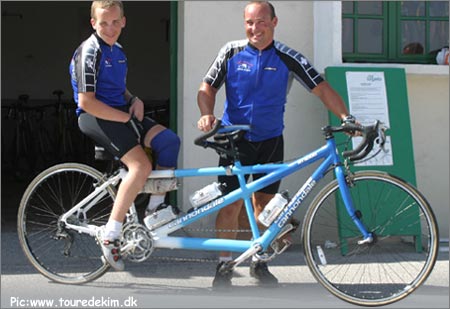 Kim and Steen set off on the cross-Europe tandem adventure on May 1st.

Kim, will bike from Odense, Denmark to Lanzarote on a TANDEM bike, about 3000 km in stages of about 100 km each day.

On the 24th of August 1998, at the age of 11, on his way back from school, Kim was hit by a car and entered in coma. Although first the doctors thought that he would awake soon, Kim remained in a coma during 5 months….

Kim awoke, but needed a lot of rehabilitation. As the public rehabilitation did not satisfy his parents, they decided to do it themselves, and took him home. The results they have obtained are really satisfactory. Now Kim is capable of doing many more things than expected or predicted, nevertheless, there is still a long road to go for him to obtain an “independent” life. The most problematic for Kim is his balance, since he suffers spasms in the left part of the body. Therefore, he falls very easily when he is walking if he cannot hold something.

Kim needs a lot of energy to speak, to eat and to drink due to spasms in the mouth and throat; nevertheless, this situation is also getting better and better with daily exercises. Kim can speak, but both the people with whom he is speaking and himself need to concentrate a lot to understand each other. 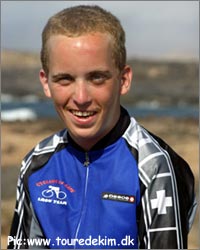 Kim is one gutsy guy with the right idea about getting across Europe on a bike.

Kim is a very happy boy with a very happy character; he understands it all and has the willing force to continue training. He certainly is a “fighter”.

Some years ago, Kim came on holidays to Club La Santa with his parents Steen and Helle. They met Ejnar Fausing, a gentleman that also suffered from a car collision and found cycling was a good instrument for rehabilitation, so he suggested that Kim and Steen try to use the tandem bike available at Club La Santa.

First they biked around the stadium, then to the village La Santa, then further to Tinajo and so on. A little later, back in Denmark, Ejnar Fausing gave them a tandem race bike, and also a pair of static bikes to train inside.

To fill you in a bit more, Kim’s family has built a complete training center in their backyard, it comes complete with spinning bikes, weightlifting equipment, a small pool 3 x 8 meters with the water being pumped so there is water resistance and Kim can walk in so to speak. It helps his balance immensely.

Now at 18 years old, Kim and his dad will leave Odense on May 1st on the tandem bike with the purpose of cycling to Cadiz where they will catch the ship to reach Lanzarote and Club La Santa hopefully on June 7th. Ejnar will accompany them also, to help them on the road and a car-caravan, conducted by Svend Brettschneider, another good client of Club La Santa and lover of this island.

The idea of this odyssey arose during an bicycle excursion on Lanzarote when they were taking a rest in front of the soccer-court of La Vegueta, in the municipality of Tinajo… so when they refer to this specific place in the village of La Vegueta, they talk about the square “Tour of Kim”.

The objectives of the trip are:

• improve Kim’s balance and give more strength to his legs,
• let Kim experience this great event that might open doors to new adventures
• transmit the message not only to Kim but to everyone that life is a gift and worth fighting for. Andrea Peron and Ivan Basso have sent a signed CSC jersey. Please follow and send support and wishes to Kim.

More information (in Danish) and pictures on https://www.tourdekim.dk/ .or contact Duncan at [email protected].

We’ll all expect Kim on June 7th, for him to enjoy the Club La Santa Lifestyle.

PezCranking: Two Months Down Under