Ed’s TOUR Look-Back: The world is a different place from last year, and thanks to Covid-19 our lives have changed. It’s Tour de France time (yes, it shouldn’t be in September) and Ed Hood should be ‘Roadside’ in France. He’s at home in Scotland reminiscing over the good and the not so good points of the Tour. 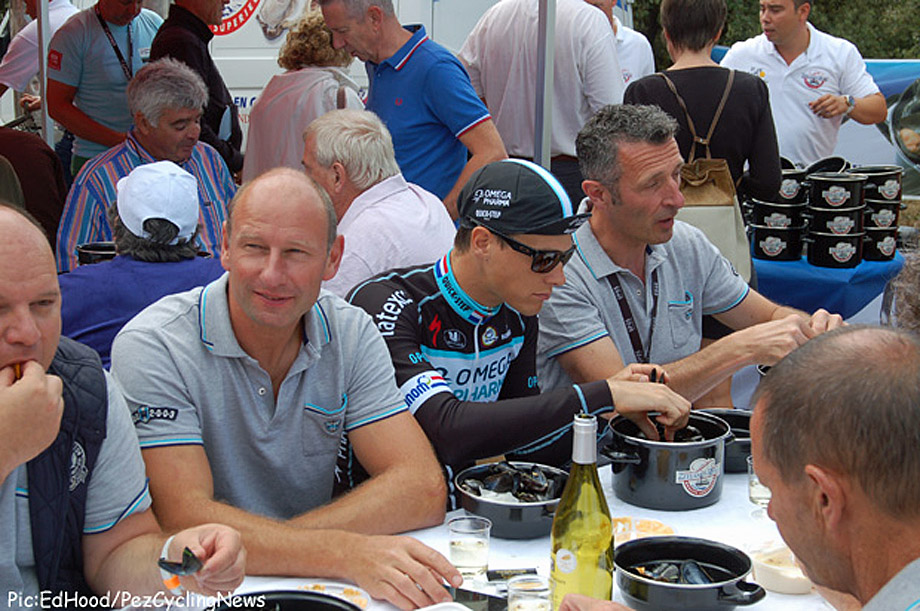 PEZ and I were reminiscing the other day about those pre-Covid and quarantine days when we used to go to le Tour. I got me thinking about the good, the bad and the ugly aspects of being a journo on le Tour. I worked my first Tour in 2006 and I well remember PEZ asking me when I was going to write about the race instead of drugs scandals and guys getting sent home.

I also remember replying that we’d be lucky if the race actually went ahead – but of course, it did, eventually but ‘sans’ Messrs. Basso, Contador, Mancebo, Ulrich and the whole Astana team. The first ‘Good’ bit though was getting my ‘creds’ those vital plastic dog tags which transform you from being a civilian to a fully-fledged part of the biggest annual sporting event on earth. 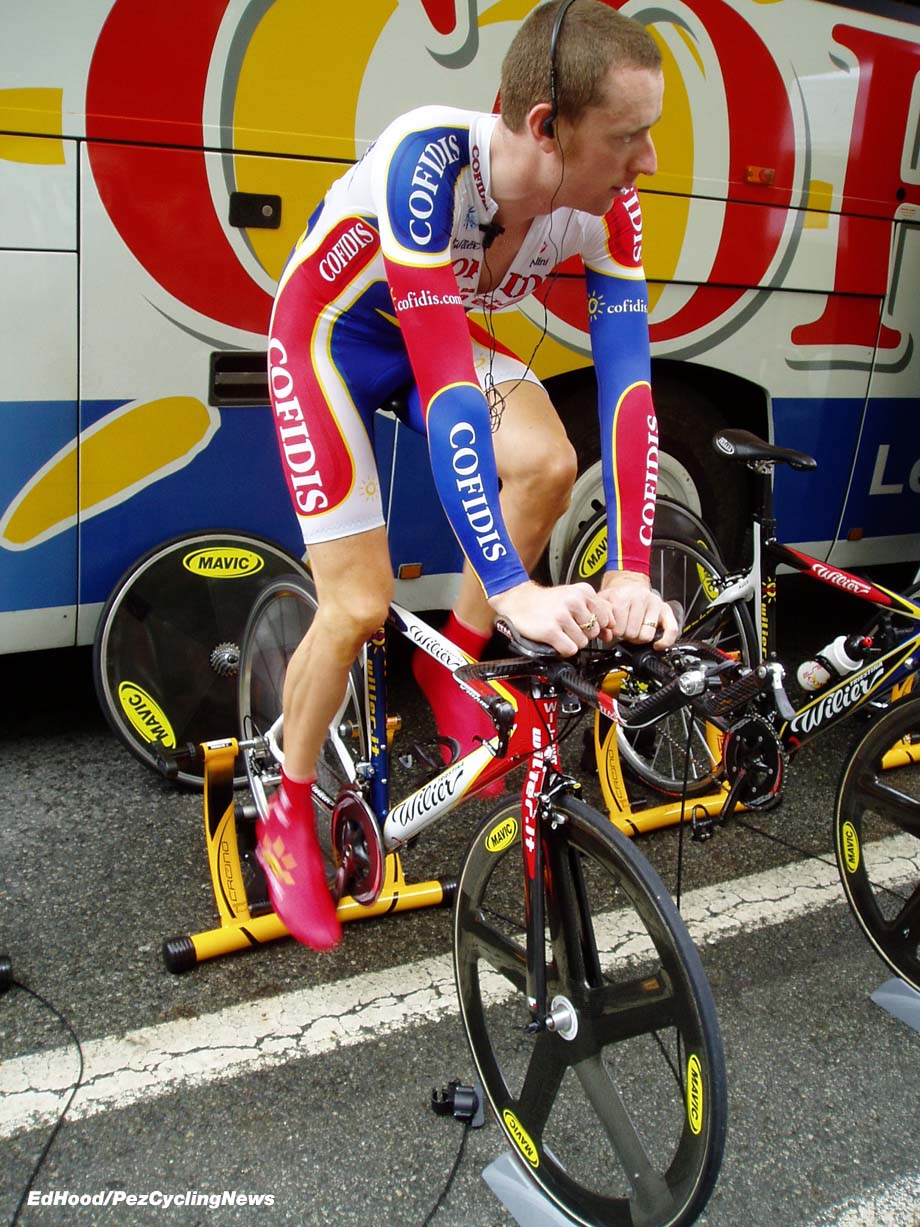 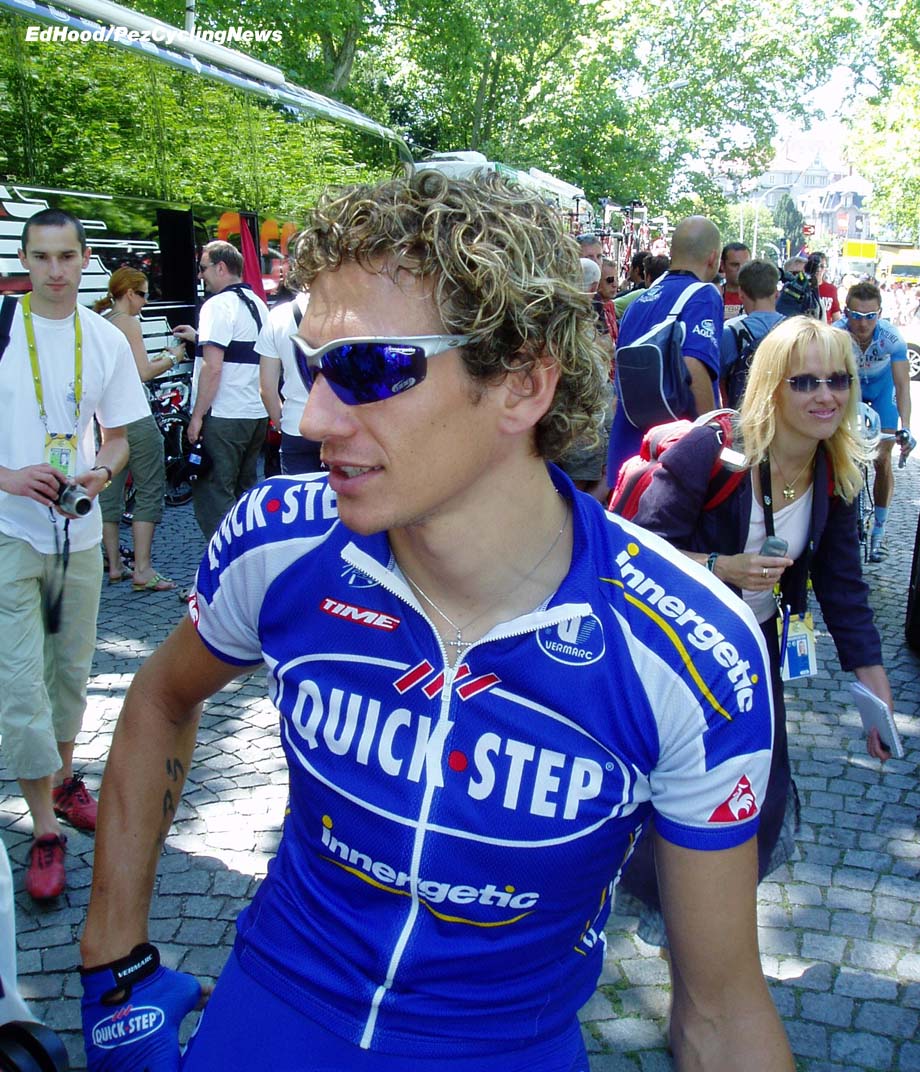 The Good?
None of that optimistically hanging over the barriers to get a quick snap of a star, you’re right there in the midst of it all and an integral component. 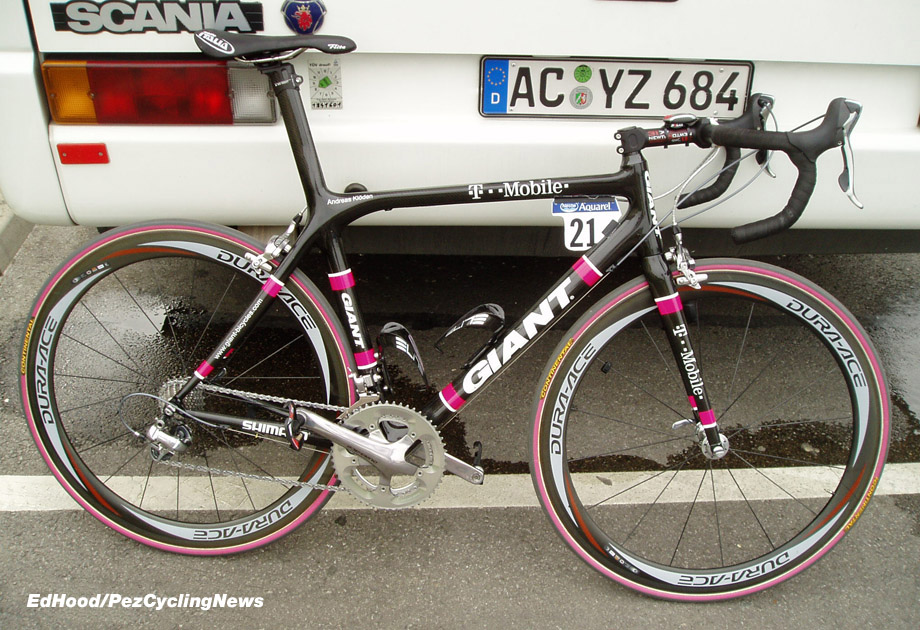 Likewise with bikes, I asked one of the Telekom mechanics if it was OK to have a look at Andreas Kloden’s lovely Giant machine; he handed the bike to me to do with as I pleased. 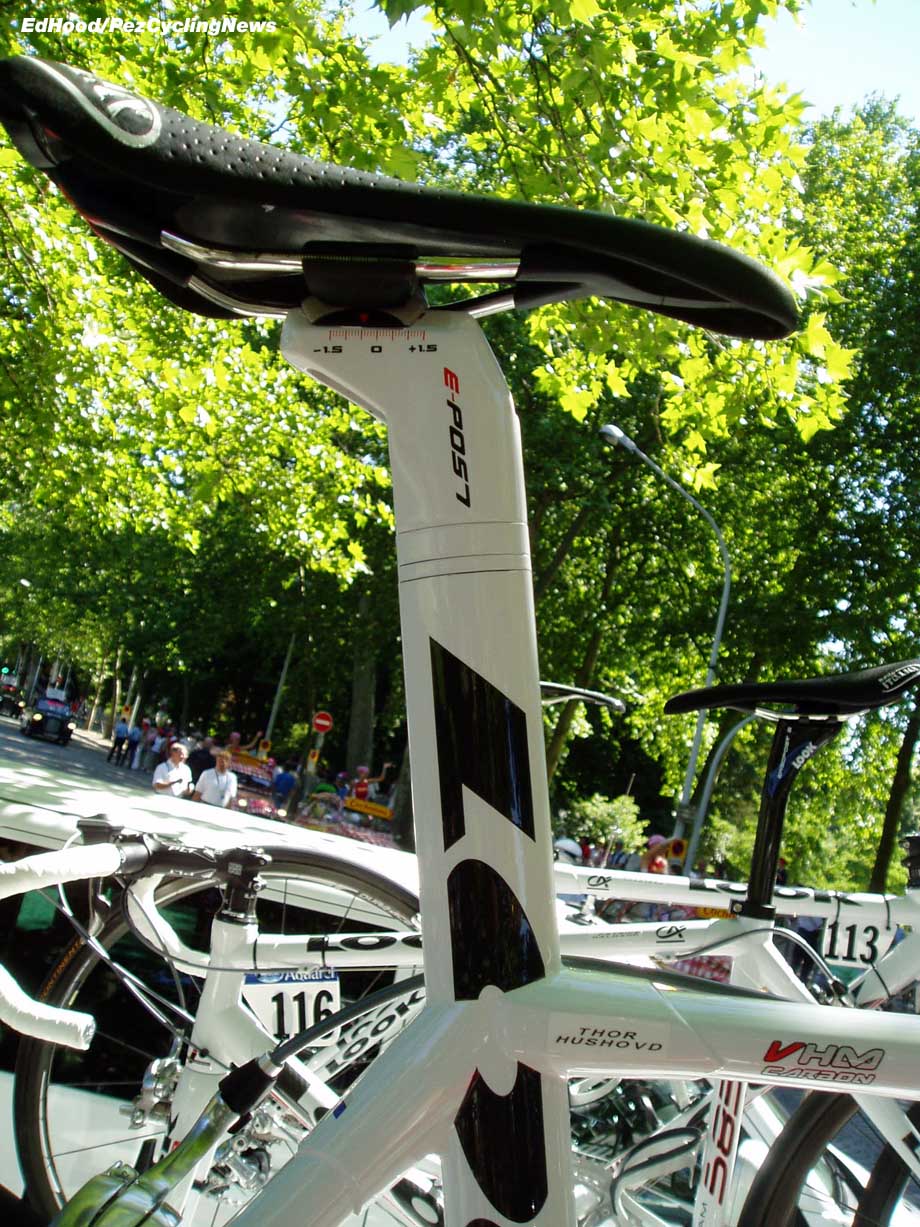 Then there was the guy from a French ‘anorak’ bike website who saw me checking over Thor Hushovd’s Look and taking a few measurements, saddo that I am. His eyes lit up when he saw my tape measure, he asked to borrow it and we became instant soul mates. 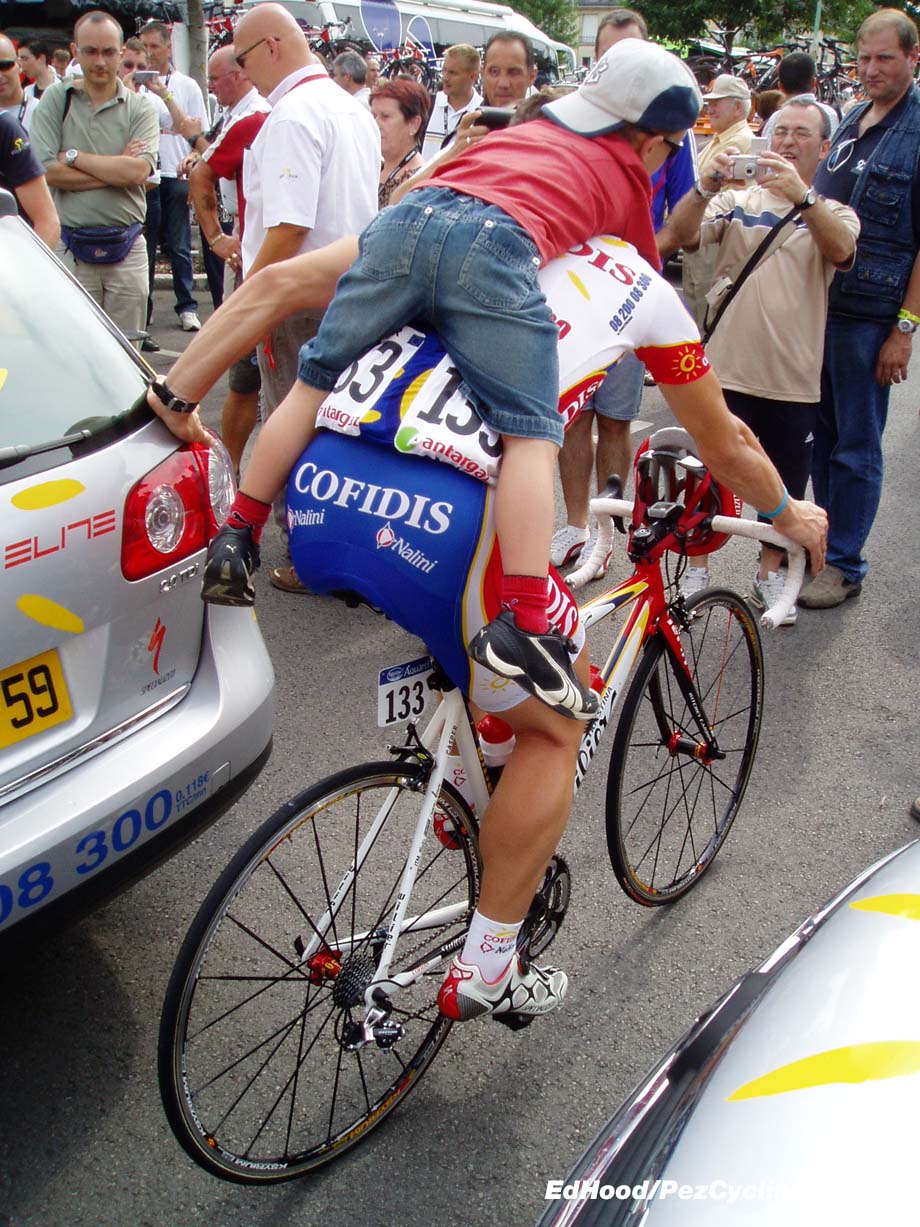 And there are the random photo opportunities, like Jim Casper taking a little chap for a ride. 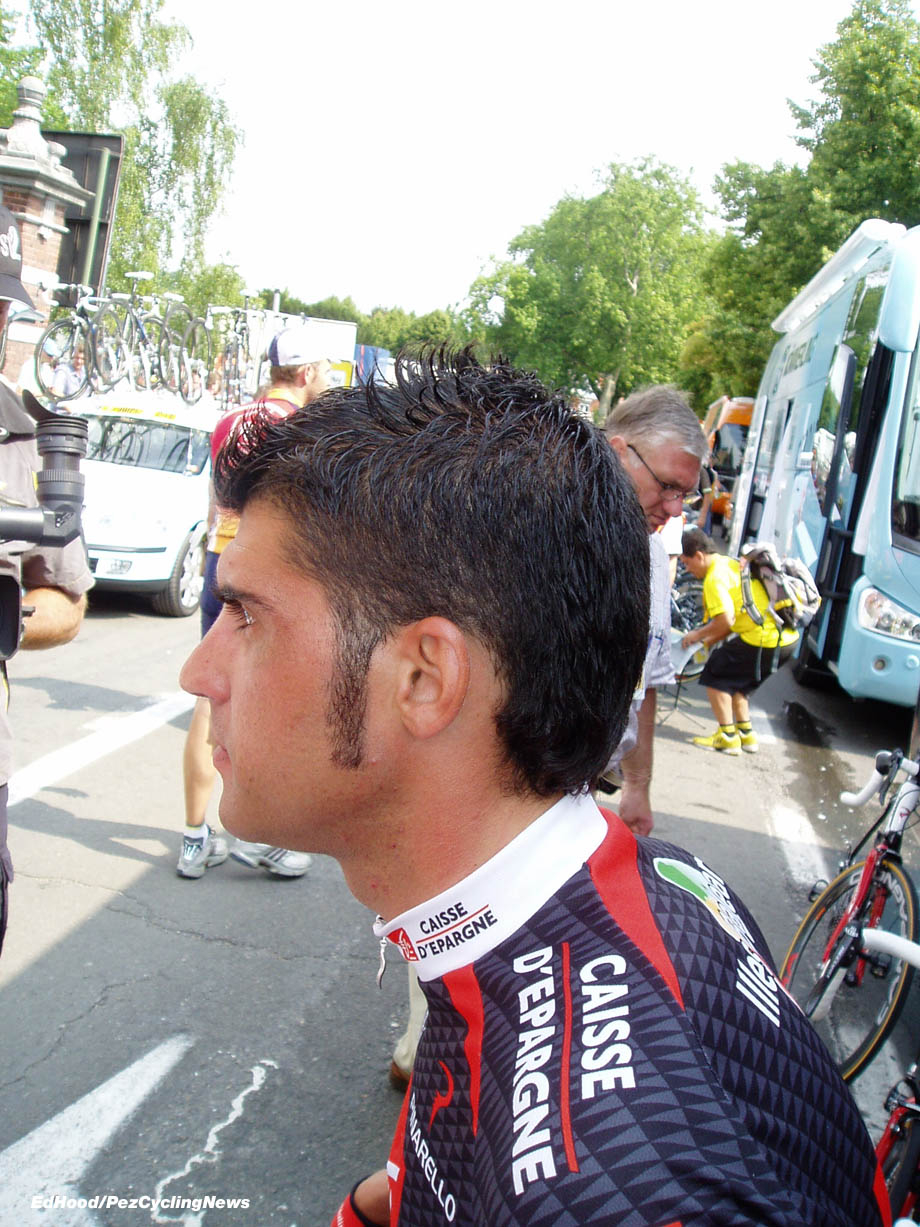 And when I snapped Oscar Pereiro’s extravagant sideburns for a ‘style’ piece, little did I realise I was photographing the guy who would win this race. 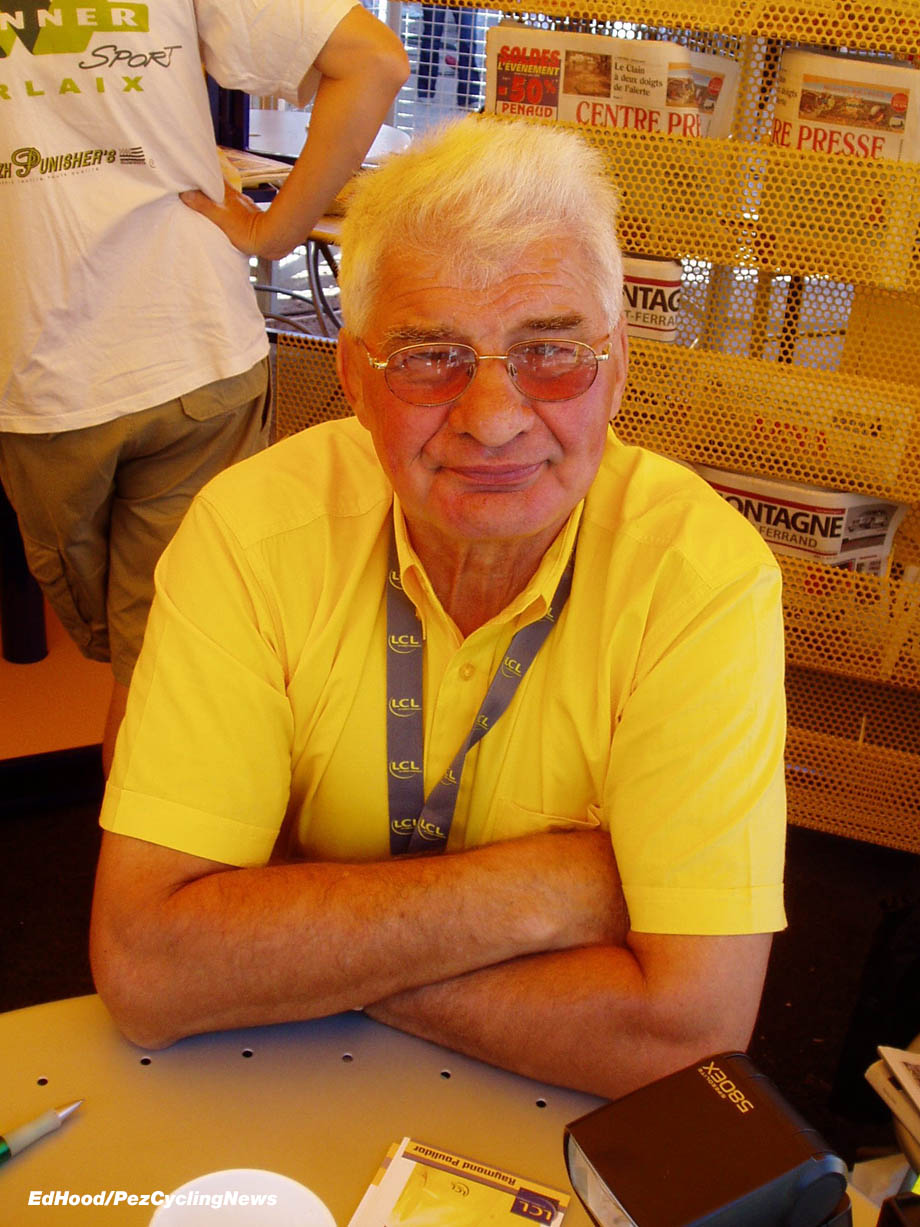 The Tour always looks after it’s own and ‘Golden Oldie’ photo ops abound, the late ‘Pou Pou’ was omnipresent. 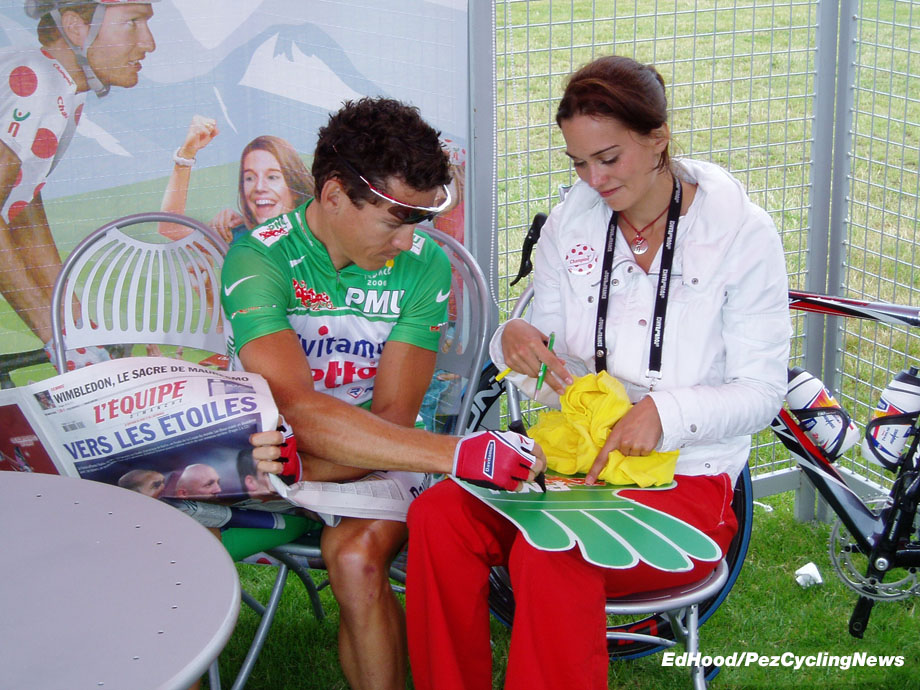 I realise it make me a saddo but getting hold of l’Equipe each morning and browsing it over your coffee was always a thrill – even Robbie McEwen used to like doing it. 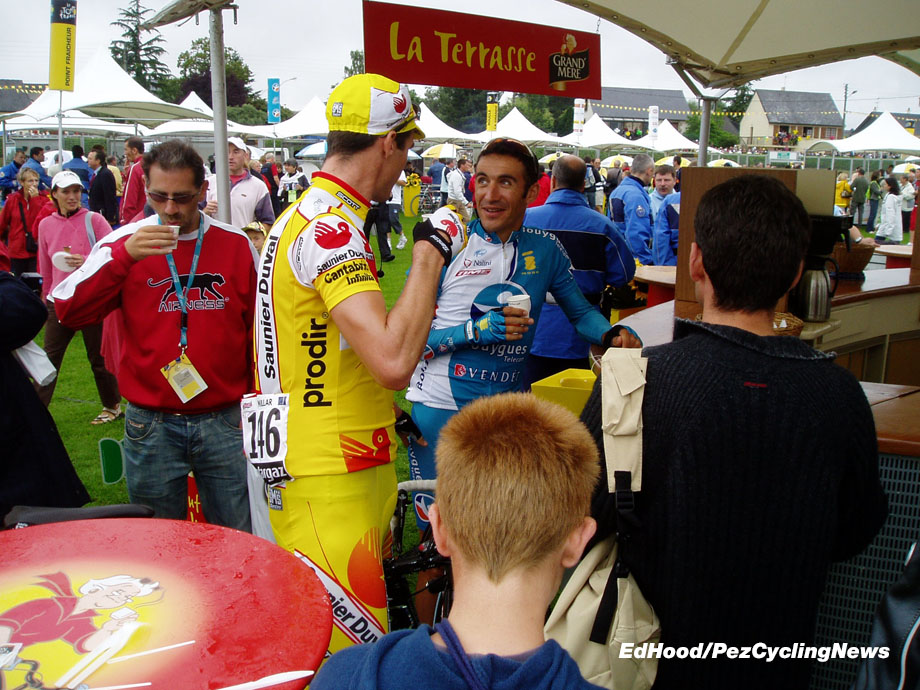 In the main, coffee in France is pretty dire but the ‘Grand Mere’ blend they were pushing that year was more than acceptable, even David Millar thought so. 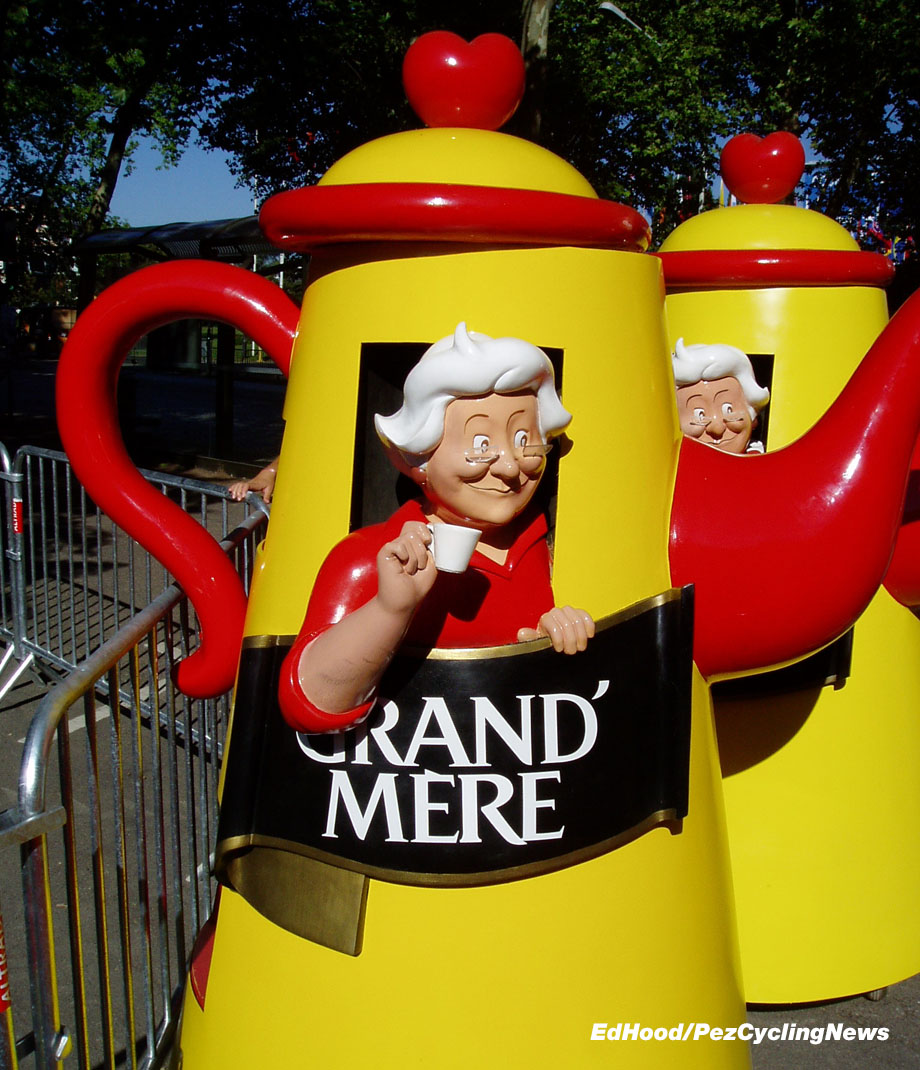 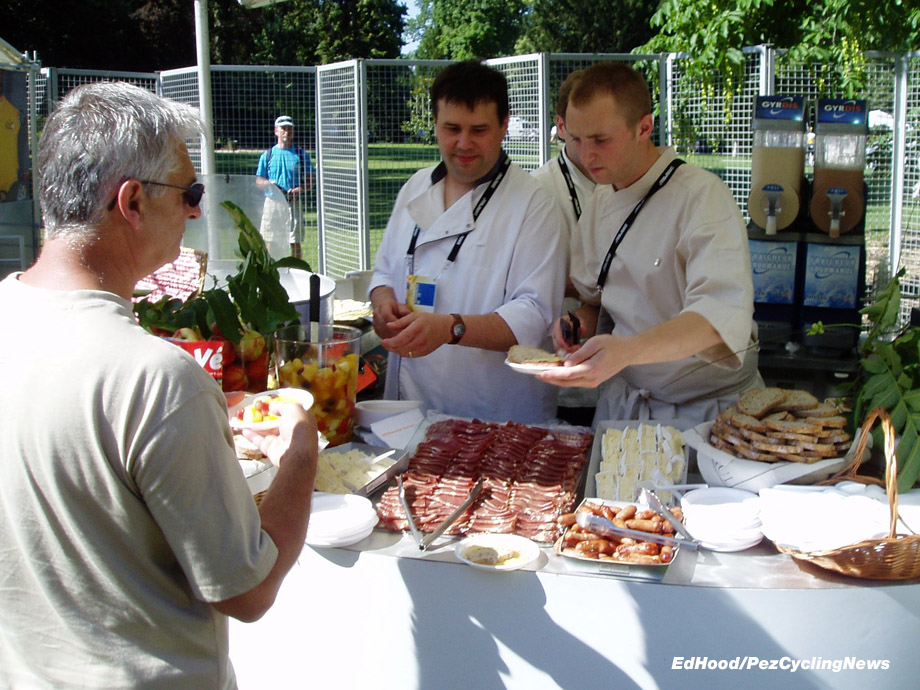 But it’s not just the coffee in the ‘Village’ which is good, many of the stage towns lay on wonderful spreads and you soon learn that you don’t have to pay daft hotel breakfast prices, you can graze a lovely breakfast FOC. And on the subject of hotels, it’s a luxury when you can stay in the same hotel for three nights, alleviating all the stress of packing, navigation and unpacking. 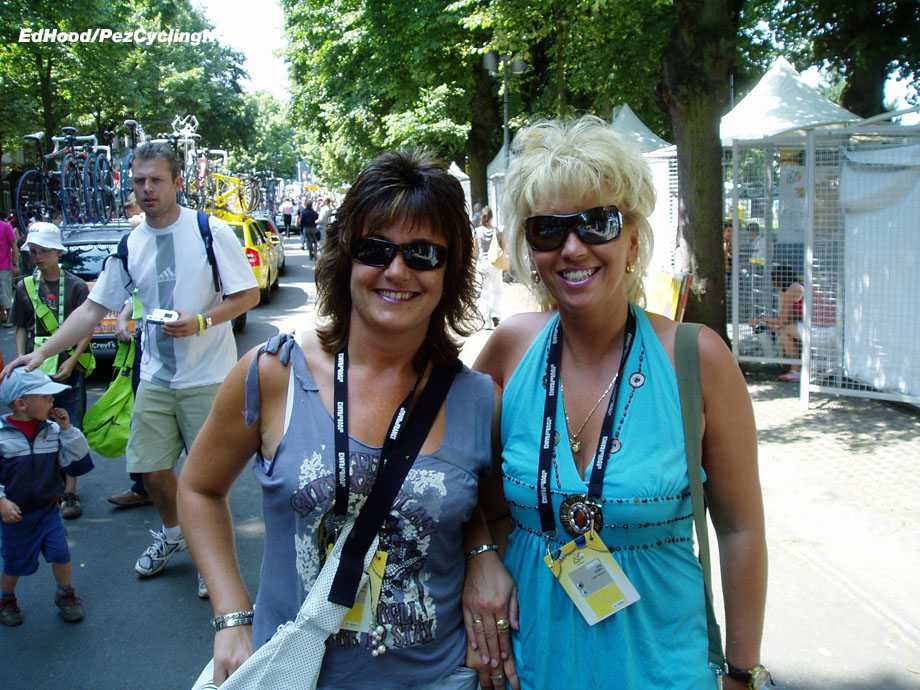 Generally, it’s a friendly vibe on the race with lots of smiles and folks always wanting you to snap them when they see the camera around your neck. 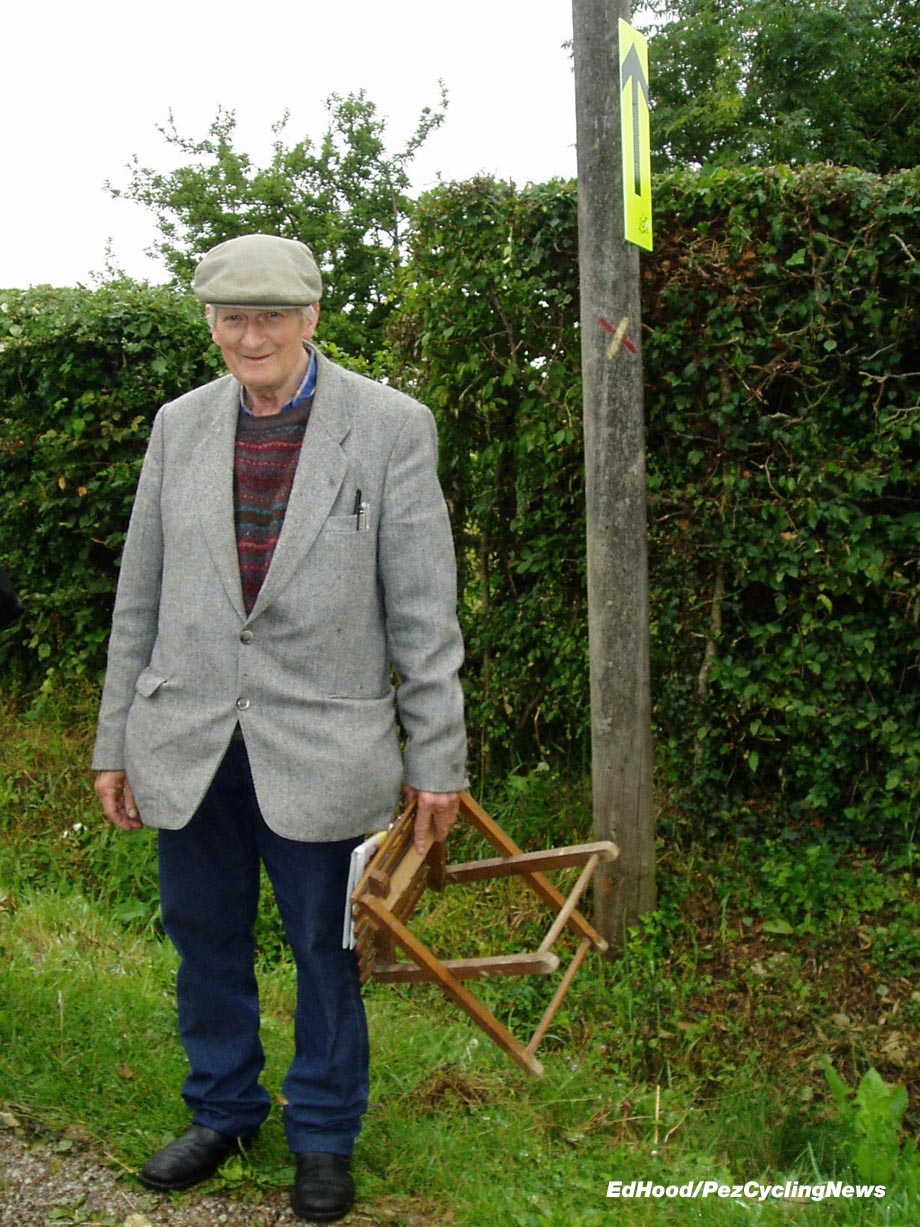 Then there’s the real essence of the race, this old race watcher, armed with stool and l’Equipe probably remembers Bobet – who was a local man to the early stages in 2006 – pedalling past.

The bad?
Much of the coffee, under-powered hire cars, weak wi-fi, mildewed beds and ‘janitors’. 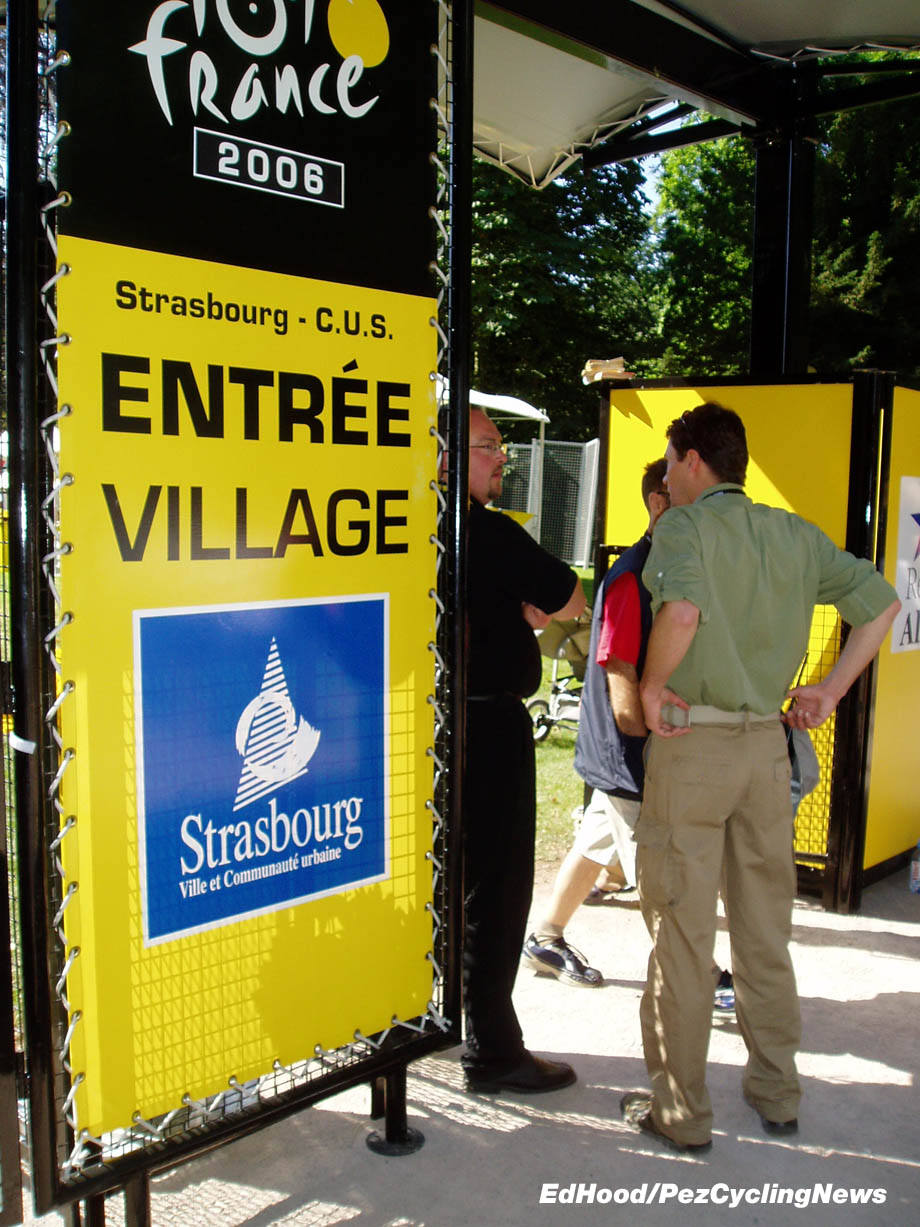 Many of the lesser officials on the Tour are volunteers who plan their holiday around the race and the ‘power’ goes to some of their heads, making them bossy and intransigent – hard work. . .
‘Bad’ is also when some idiot scrapes your hire care – over the years I’ve become a dab hand at polishing out scratches with tooth paste. . .

Later, on mountain stages we had to contend with the imbeciles who chuck basins of water in through the open car window – great for your laptop and camera. And on l’Alpe d’Huez you learn to lock the doors to stop drink crazed Belgians hopping aboard. 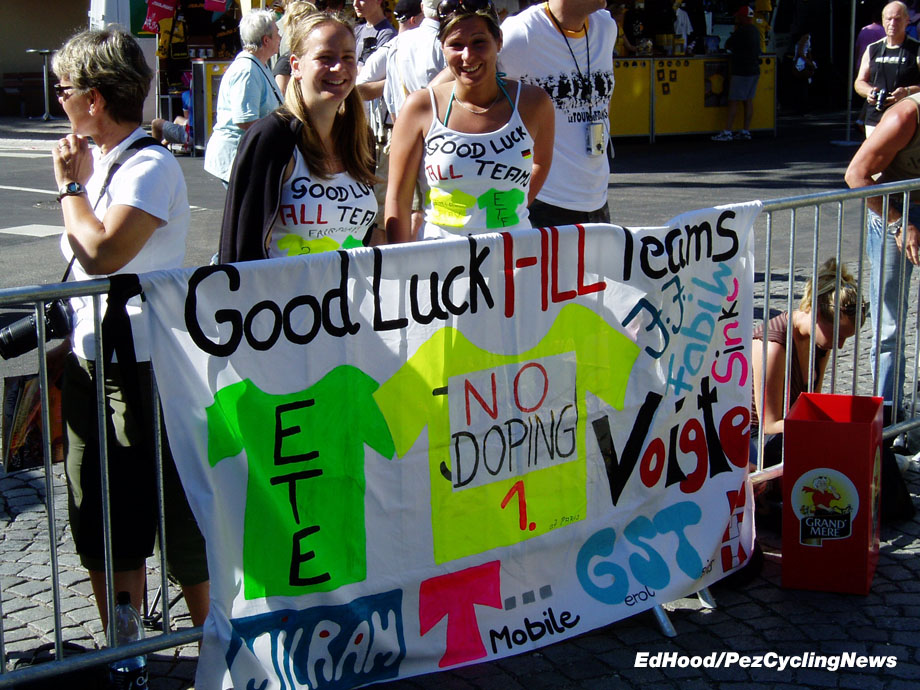 The folks who knocked this banner together sadly didn’t get their way. . . 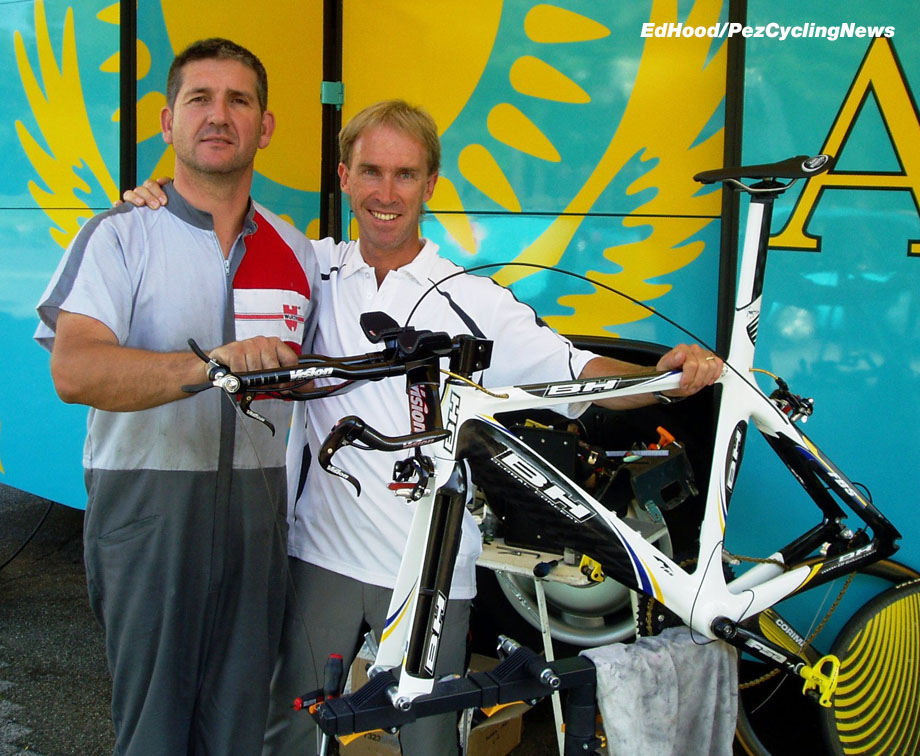 I tracked down the Astana hotel the night before the prologue and spoke to DS, Neil Stephens who at that stage was optimistic about them getting to ride. But ASO didn’t want Vino in the race and excluded the team on the basis that they didn’t have the minimum six starters due to exclusions linked to the Puerto drugs scandal. Their sprinter, the little Aussie, Allan Davis was incandescent with rage about being denied his shot at the Gran Boucle; he’d won two stages in the Tour Down Under and had three podiums in Paris-Nice that year. 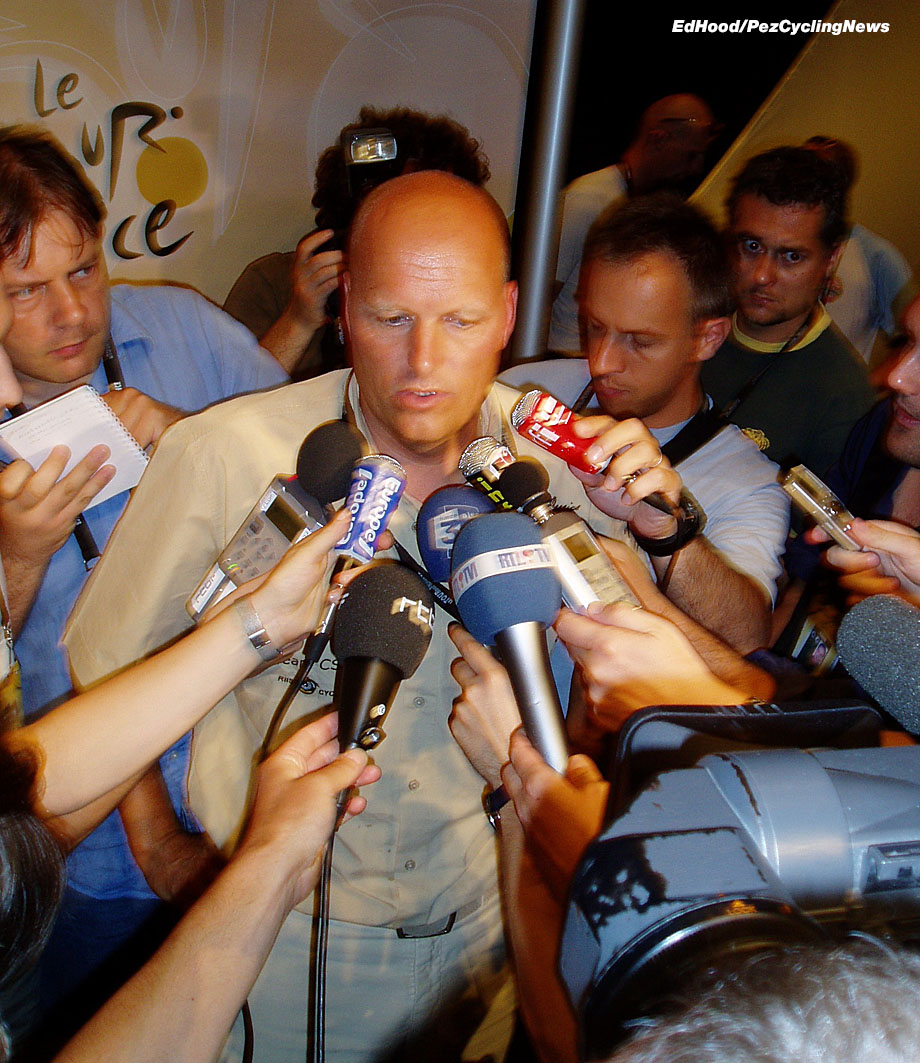 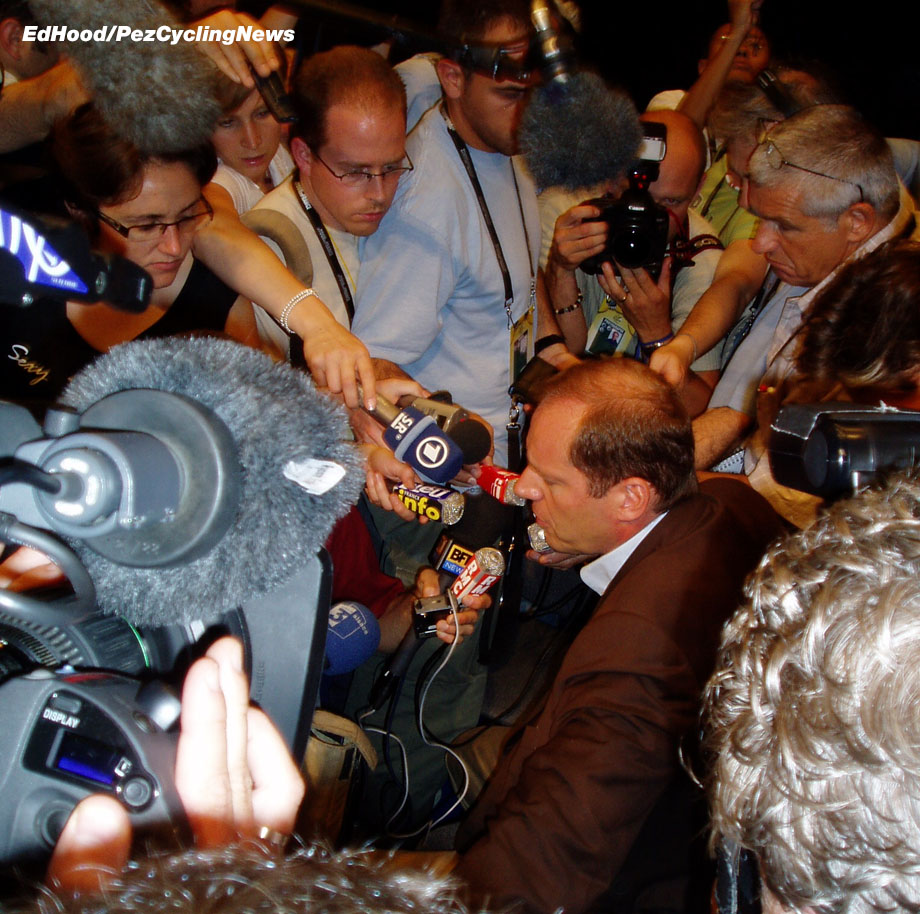 The press conferences before the start were insane, Riis was grilled to within an inch of his life by a rabid press pack demanding to know why Basso had been sent home. But all fell silent for a moment when some idiot asked Bjarne if he was as angry at Sen. Basso as he had been at his time trial bike that time he chucked it into a field. Whilst Christian Prudhomme’s diplomatic skills were tested to the limit. At one of the conferences I felt something brush my lower leg, it was a guy with a microphone crawling along the floor and weaving through the forest of legs to get to the front. Crazy. 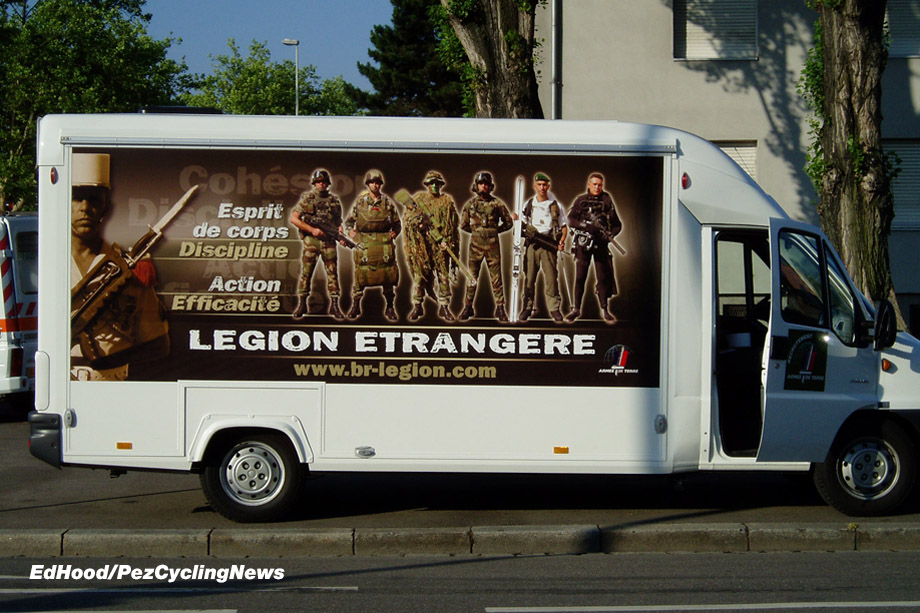 I sent this picture in along with the suggestion that perhaps Big Jan might like to consider joining the Legion? We didn’t run it – but back then we didn’t know how bad things really were. 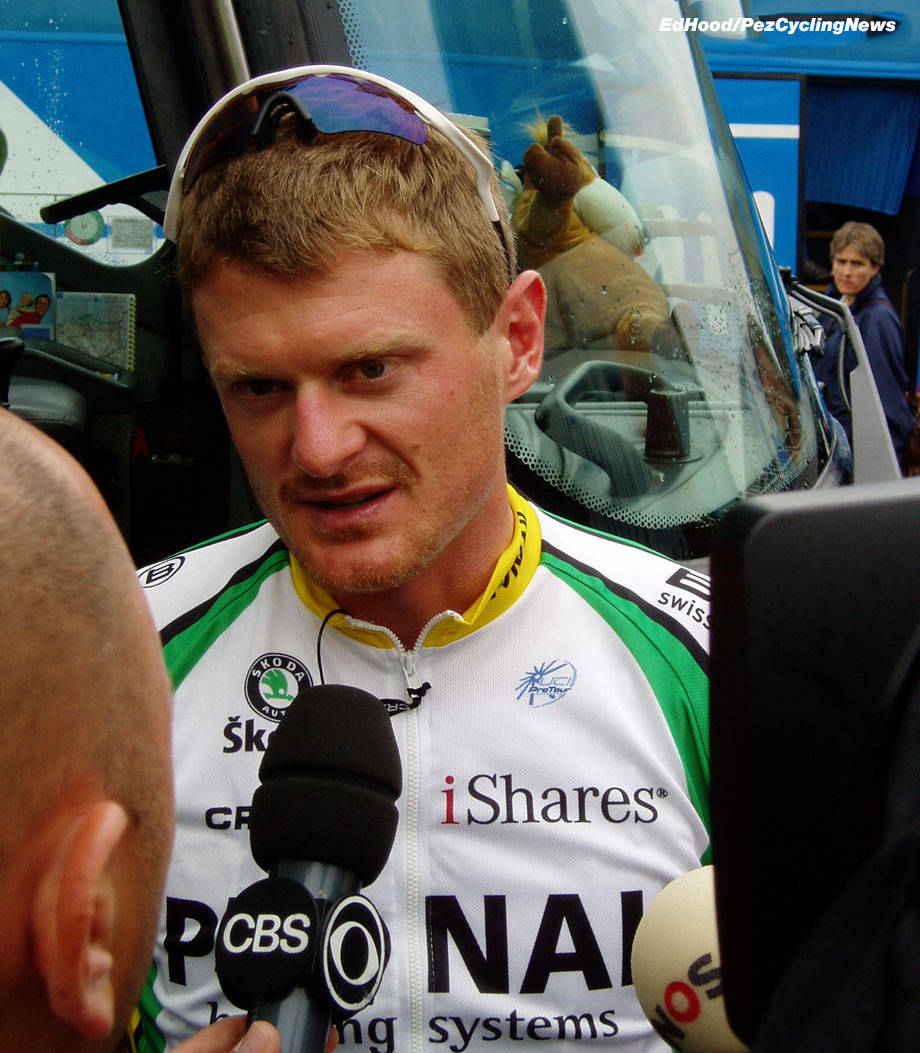 When I took this picture of Floyd Landis I had no idea of the firestorm that would rage around him just days after the race finish and not burn out until he’d taken Lance down. 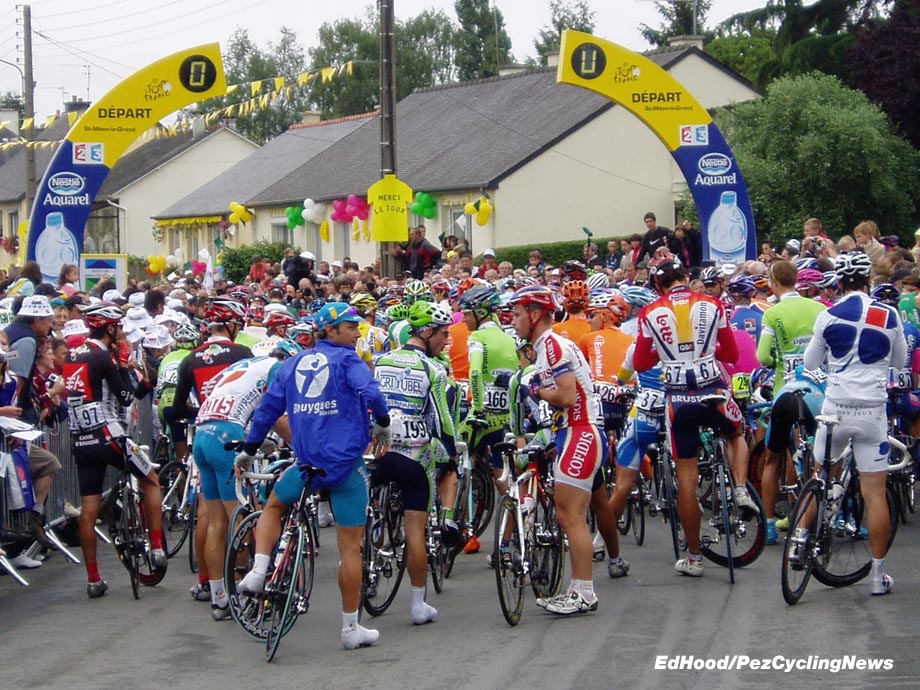 This shot isn’t ugly, just sad, my last glimpse of the race as it went on its way, leaving me to drive home to Scotland. I always tried to work the last week after that; the feeling of ‘unfinished business’ was crushing. . . 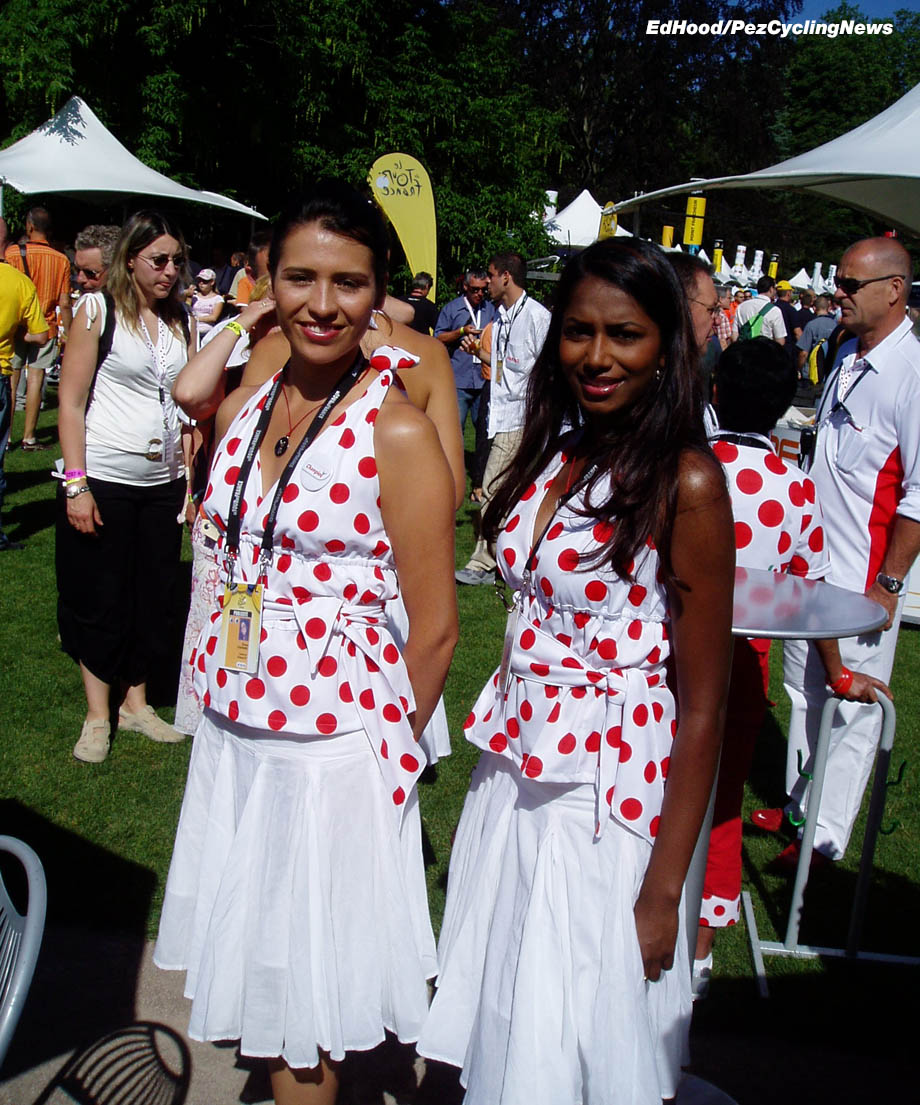 PEZ Picks The Coolest Tour Stages Of All Time!