With two yellow jersey riders abandoning in this year’s Tour de France it’s apt that Ed Hood takes a look at the career of Luis Ocaña who famously crashed out of the 1971 Tour. Ed has never hidden the fact that he is a big Eddy Merckx fan, but he is not exclusive to other riders and anyone who can scare Merckx into thinking he was not invincible has to be given a lot of kudos. The Ocaña story is of great talent and a lot of “what if’s”, the brightest flame burns quickest.

On the day the 2015 Tour de France started in Utrecht, I finished a book about one of the race’s all time greats – not one of those on five wins; Anquetil, Hinault, Indurain or Merckx. This man won just one Tour; but it’s not for that win he’s remembered for rather for a glorious defeat which old Merckx-istas like me still deconstruct and debate into the wee small hours in the bars of Gent.

Luis Ocaña is the man and Carlos Arribas’ book is titled simply; ‘Ocaña.’ 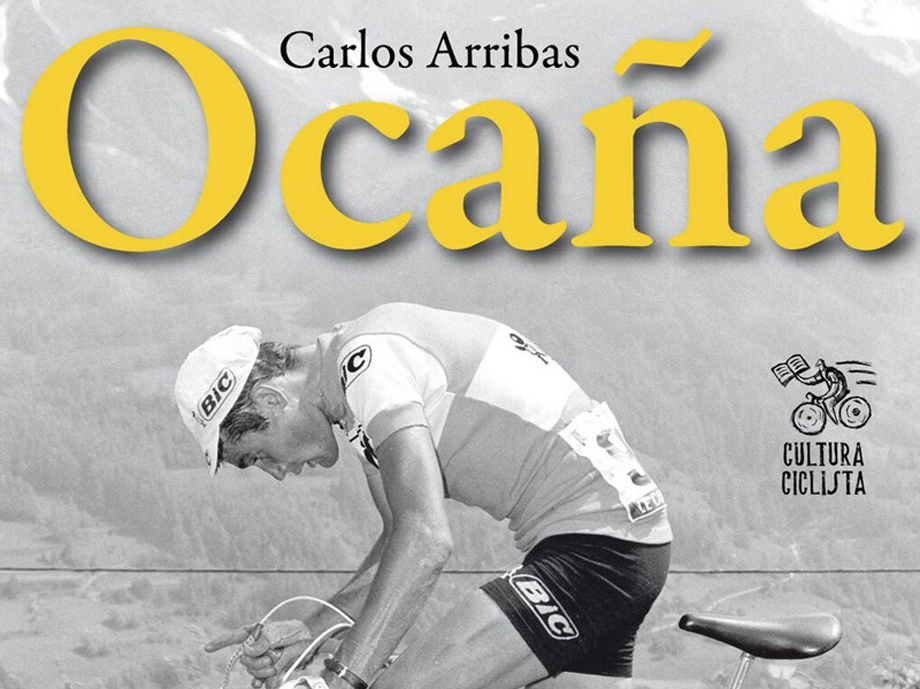 There’s just one race picture, on the cover – not of the handsome Spaniard in his pomp in yellow on the tops at the head of some royal group in Le Tour or hunched at his stylish best against the watch. No, this picture is of a wasted Ocaña in the mountains staring down at the front tyre of his intricately drilled out Motobecane; one finger points ahead as his big hands smother those tiny Campagnolo brake levers we all revered back then.

It’s as if that one finger is all that can respond to the commands of a brain which never calculated, which only knew one way to race – attack! It’s an unusual book; there are huge chunks of imagined dialogue some of which is hard going but some of which is fascinating – like his attention to detail on his bike. He was one of the very first to adopt a titanium frame, had his mechanics drill his bike for lightness and source aerospace titanium bolts. 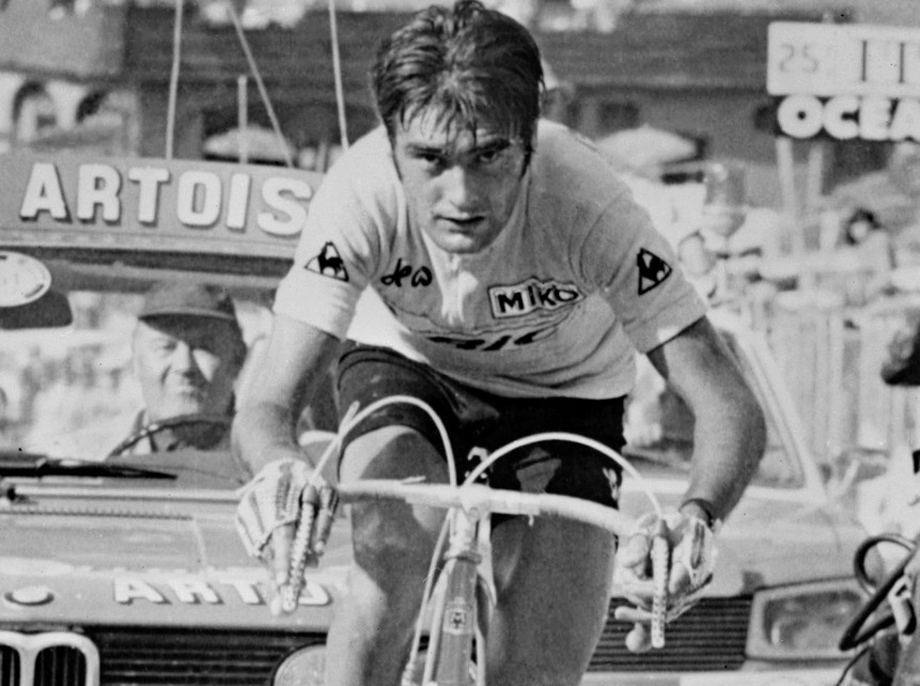 His Tour win came in 1973 when he dominated the race, winning six stage – but it’s for the 1971 epic that he’ll always be best remembered. Whilst the other riders of the day talked about ‘taking the race to Merckx,’ the truth was that most were happy to ride for a podium spot. 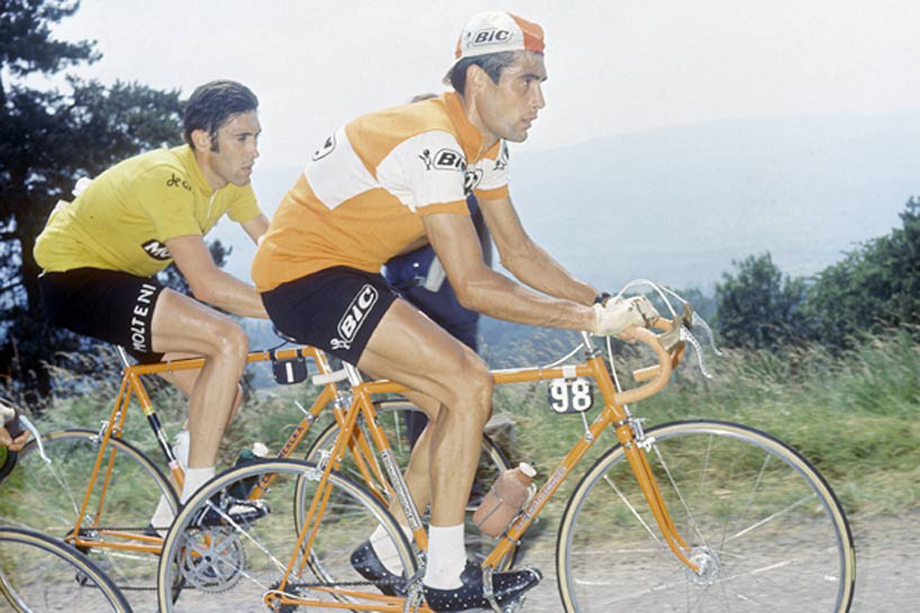 Not Ocaña. With two brilliant stage wins he shattered the myth of Merckx invulnerability to grab the yellow jersey – and it looked as if the race was won. But a wounded Merckx was a dangerous beast and the big Belgian attacked the Spaniard relentlessly over the next stages.

Merckx-istas like me, maintain that Ocaña would eventually have crumbled and succumbed to the Belgian but there’s a school of thought which contends that had Ocaña not crashed heavily on the river of mud which the descent of the Col de Mente had become he’d have worn yellow all the way to Paris. 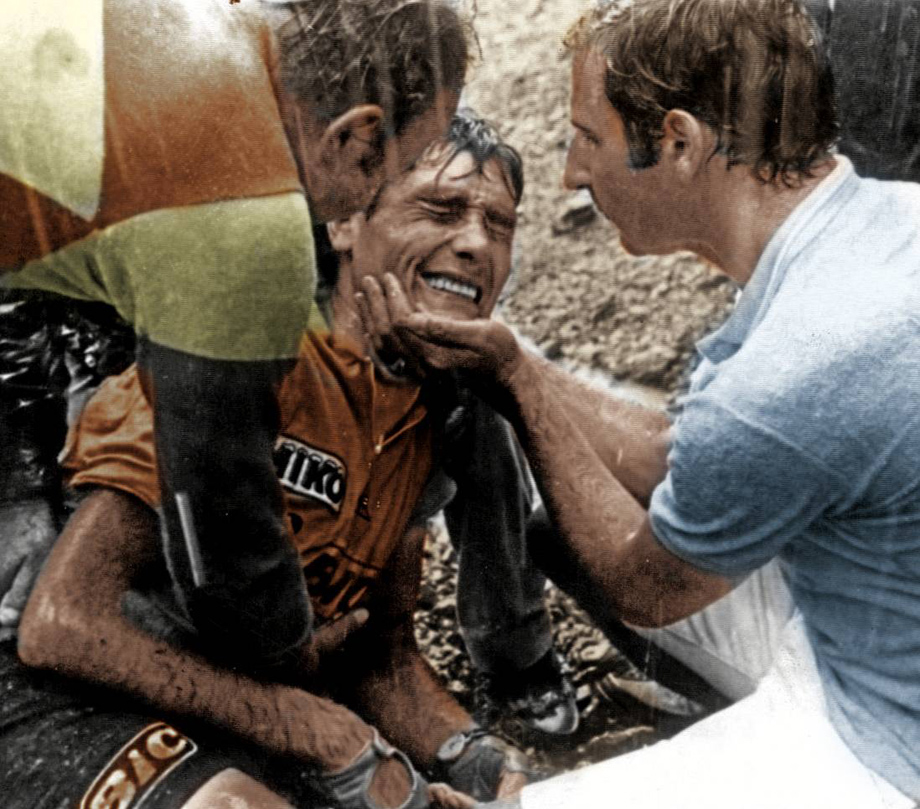 Merckx crashed first but was soon up and away; not Ocaña who had Zoetemelk and Agostinho slam into him as he lay on the deck, leaving the maillot jaune bruised and broken on the tarmac. Merckx didn’t don yellow for the next stage in deference to the Spaniard but Ocaña was on the front pages all over Europe that day and his place in Tour legend was secure.

If there was any doubt about Ocaña’s form and class that year it was dispelled when he dominated the late season time trials, winning the Gran Prix des Nations, A Travers Lausanne and the Trofeo Baracchi with classy Danish Bic team mate, Leif Mortensen who couldn’t spell Ocaña by the end of the percorso – such was the Spaniard’s pace. 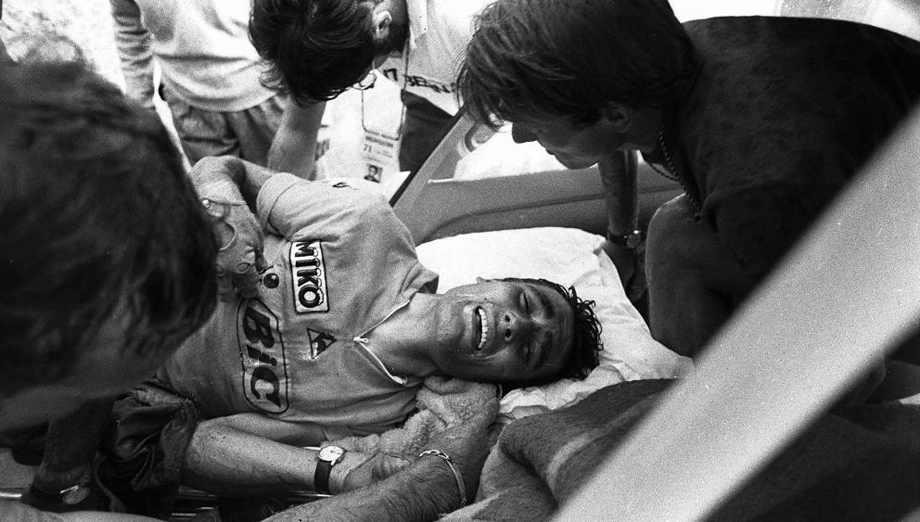 The yellow jersey leaves the Tour in an ambulance

Ocaña came from a dirt poor background and a background where affection and food were scarce commodities. His first race was in 1962 – so was his first win and by 1963 he was racking up the first places. He rode ‘independent’ for four seasons piling up victories, usually by disappearing up the road, solo never to be seen again with little thought of tactics or how far there was to go. Full pro for ’68 with Fagor he took the Spanish Professional road Race title, was second in the then highly sought after but now ‘no more’ Montjuich hill climb in Barcelona and took three stages in the Ruta del Sol – an auspicious pro debut by any standard. 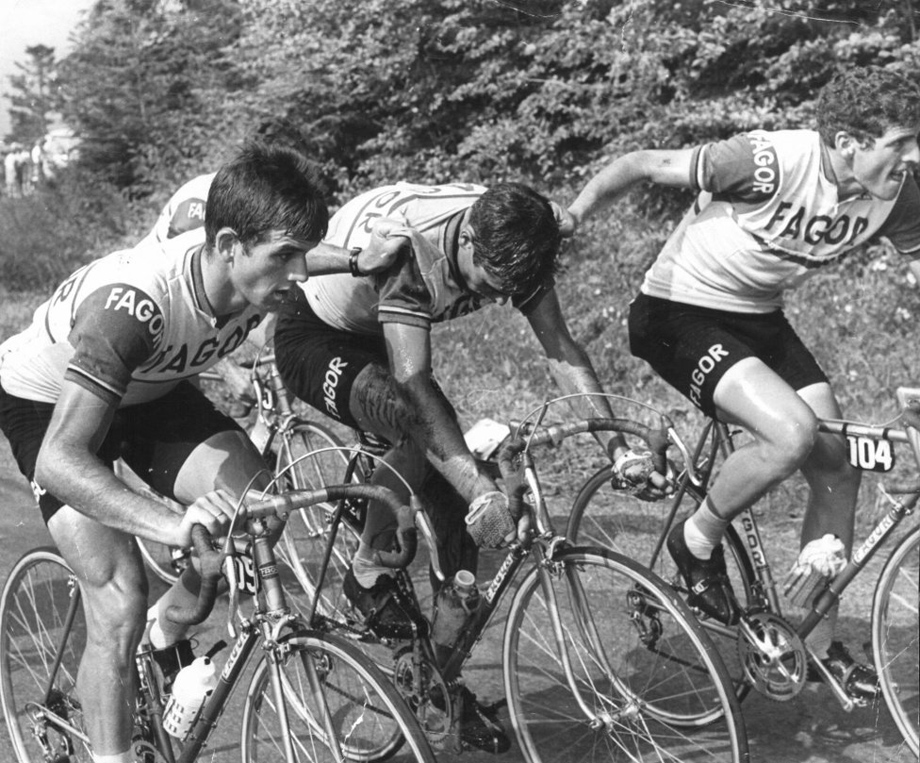 In ’69 Ocaña needed the help of his team to finish. Tony Martin knows the feeling

In ’69 he won the now late lamented but prestigious Setmana Catalana and another race now longer on the calendar, the equally desirable Midi Libere as well as finishing second on GC in the Vuelta with three stage wins. For 1970 the name on the jersey was Bic and he claimed the Vuelta and Dauphine to confirm his class and potential.

His 1971 season we’ve looked at – but he also won the Tours of the Basque Country and Catalonia that year. In ’72 he took the Spanish Champs and Dauphine again but collapsed in Le Tour where the expectation was he’d pick up the spear from ’71. 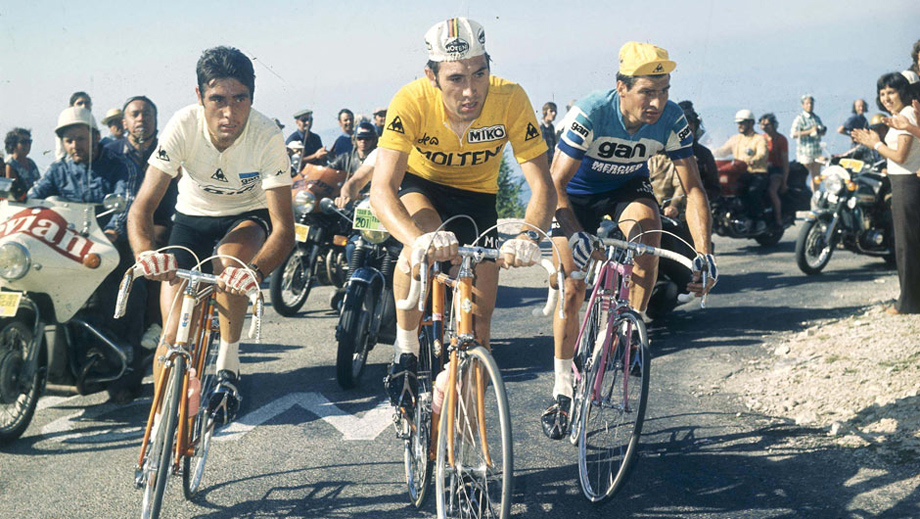 The young Ocaña with Merckx and the veteran Poulidor

But alas, Ocaña didn’t have Merckx’s bull rhino constitution and could be fragile. The following year belonged to him though – the Dauphine, Setmana Catalana and Tour of the Basque Country as well as second in the Vuelta, all crowned by his beautiful Tour win. The 1974 season should have been another triumph – but wasn’t; his eye was off the ball as he bought a grand country house and vineyard during the off season to realise his dream of being a gentleman land owner producing fine armagnac in Southern France, distancing himself from his peasant beginnings. The house and vineyard would eventually ruin him financially and certainly meant there were no big wins in ’74.

Ocaña’s story is one of highs, lows, triumphs and disasters – and a desperate desire to please and be better than his father. He was also torn between his Spanish birthplace and French home – his mind was never still. Bic let him go for ’75 and he rode for Super Ser with again no major victories – ’76 was a similar tale and in ’77 he lined up for the Dutch – and now cult – team, Frisol. It was with the Dutch squad I first caught sight of the man. 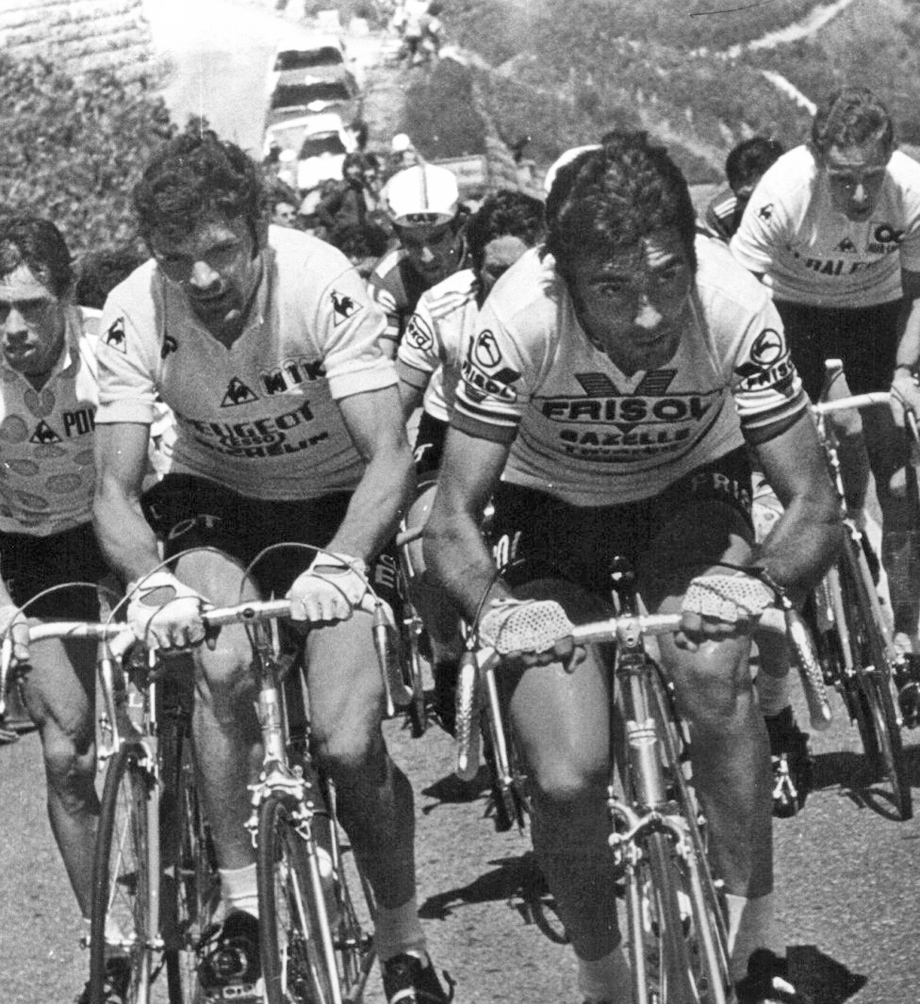 I was never a fan of Ocaña’s in my youth for no other reason than he dared to speak out against my idol, Eddy. But in a criterium on the now defunct Eastway circuit in London in a criterium organised by boxing promoter, Mike Barrett to showcase Eddy Merckx and other continental ‘Bigs,’ Ocaña shone like a diamond. 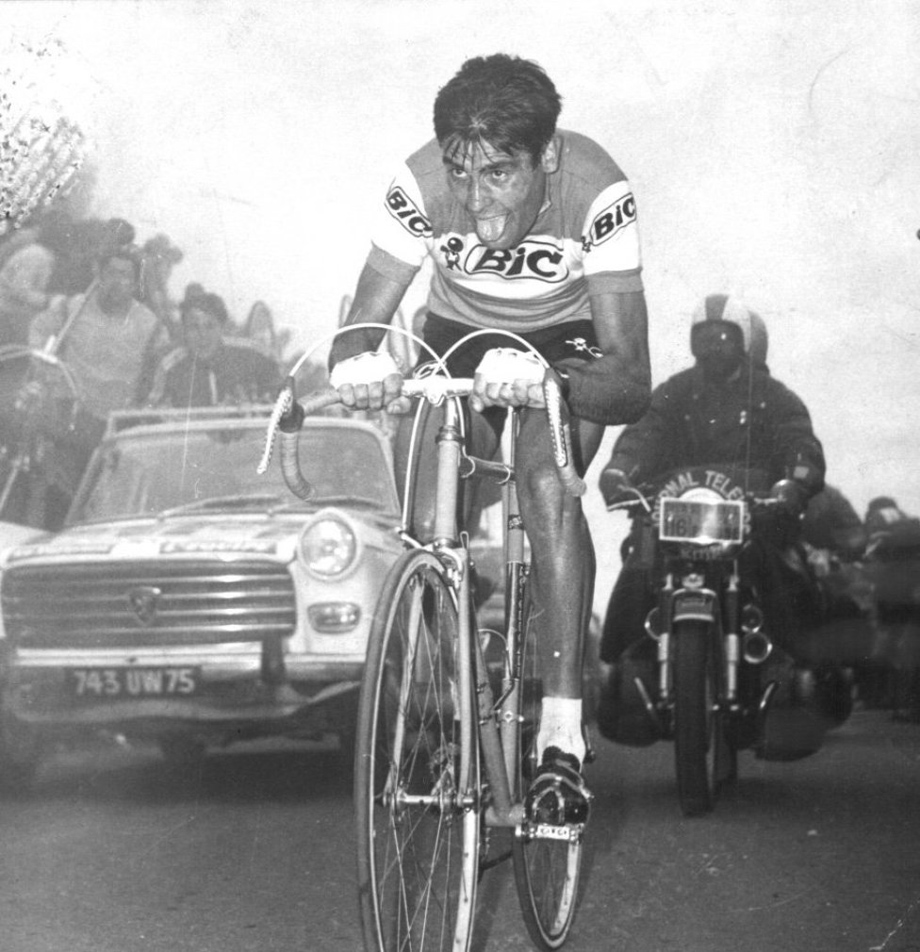 Fighting through the mountain mist

Didi Thurau won the race with Sid Barras third and an ageing – but still mighty strong – Eddy Merckx third. But ‘man of the match’ was Ocaña, tanned, stylish and constantly on the attack whilst many of the other continentals stuck their start money in their pockets and trundled round in the peloton. I was an instant convert – I recognised cool and class when I saw it.

After his career as a pro ended he became a DS but with little success. The old truism that, ‘the best riders don’t make the best DS’s’ was never more true – with Ocaña frustrated by his charges’ inability to skoosh off up the road like he used to. It didn’t occur to him that he was a ‘great’ and they weren’t.

Climbing alone in the Tour

He worked as a journalist and radio and TV pundit but was constantly fighting a battle with his ailing health and finances. It was May 1994 just days before he was due to go and work on the Giro when Jesus Luis Ocaña took his own life with a pistol shot to the head. 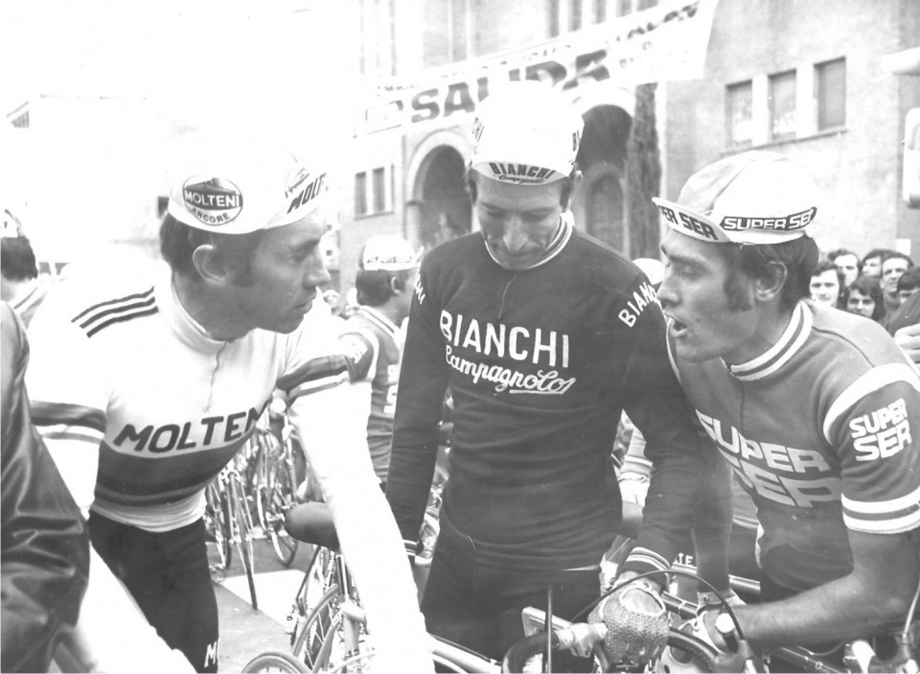 Three big stars of the 70’s: Merckx, Gimondi and Ocaña

This fact is recorded in the book and was always what most believed – however, Sen. Arribas puts forward another possibility which I’ll leave you to discover for yourself. Men like Ocaña don’t exist anymore, impulsive, out spoken, arrogant but never not conceited. Not for Luis Ocaña the ‘politically correct’ line or ‘letting the right break go’ – he told like it was, raced like a man and was one of a very few to put my hero, ‘Big Ted’ on the ropes. 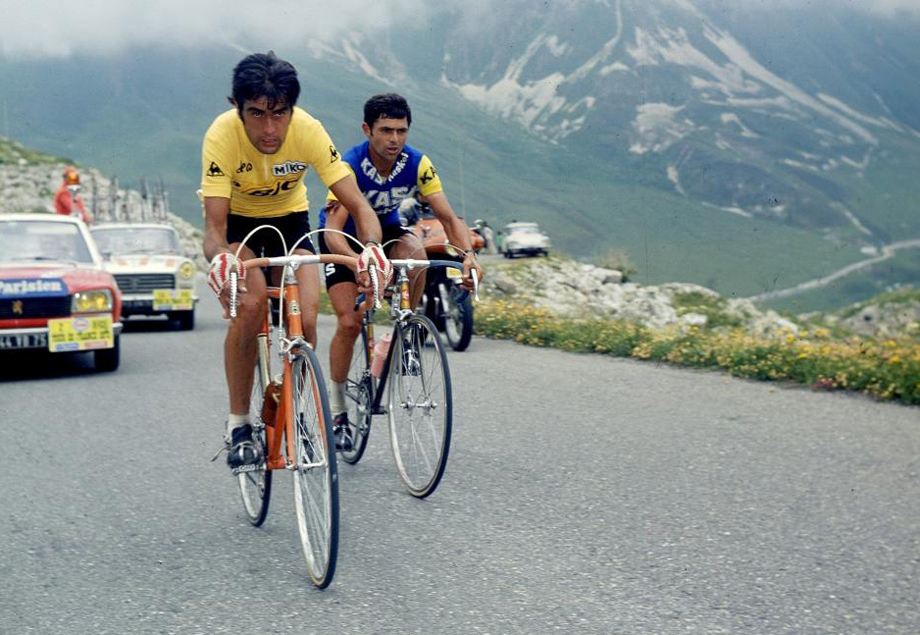 Read the book, grit your teeth through some of the dialogue but marvel in the life of a man who lived it, ‘his way’ in an era when ‘drama’ wasn’t just someone’s chain coming off. 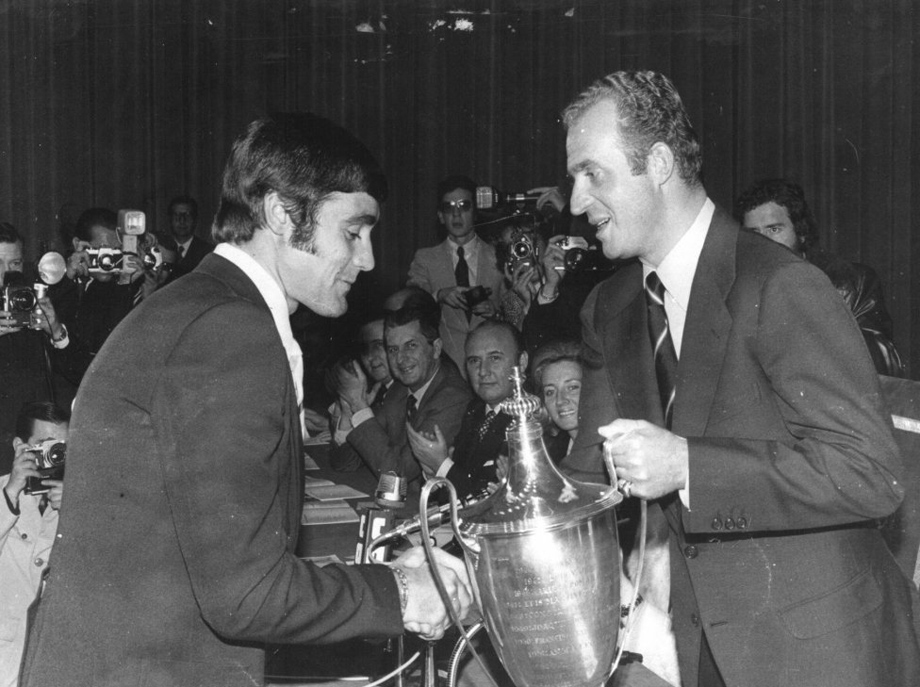 Ocaña by Carlos Arribas is available form Amazon and many other book shops.

All photos from archive and many unknown sources, but with thanks to all the photographers.