It’s a story that is, in some ways, as astounding as Lance’s own story as a cancer survivor and Tour de France record holder. The Calgary-based Tour of Courage Society, initiated by entrepreneur and big-time cycling enthusiast Joe Dutton, has in less than 3 years raised over $6 million for cancer research.

Much is owed to Lance Armstrong who got on board with group less than 2 years ago, and before any funds had been donated, and without whose support, this level of fundraising would likely not have been possible. 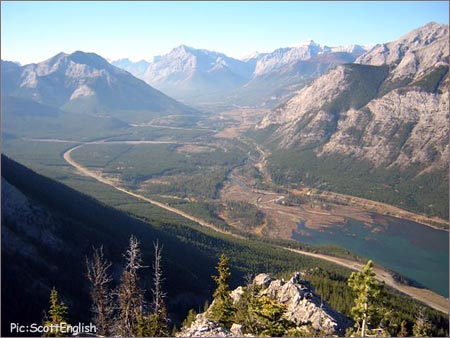 Classic shot of the Canadian Rockies near Banff. Lance will lead a lucky group on two days of riding here.

Lance and his friends George Hincapie, Chris Carmichael, Johan Bruyneel, and Phil Liggett, will return to Calgary again this September to lead the final fundraising weekend to reach the $6 million goal. In fact, early commitments from supporters and donors have now surpassed $6 million. 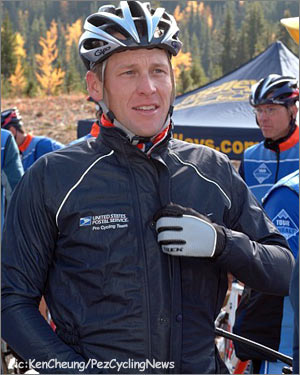 When PezCycling interviewed Lance in April, he said this about the Tour of Courage:
“The Tour of Courage guys set out to do something in five years and they did in somewhere like 18 or 19 months so they are doing great work. To me Calgary was one of the biggest surprises because I haven’t been to Canada much and never been to Calgary, but you get up there and realize it’s an unbelievable city, great people, clean city, exercise friendly and good bike riding.” 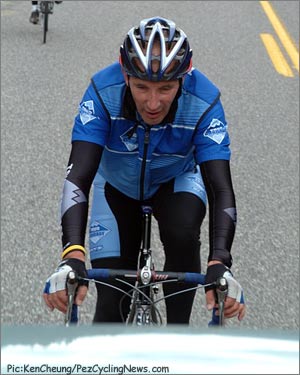 Phil Liggett Comments on The 2005 Tour of Courage
“I was really looking forward to this event as it is so well organized and the reason so endearing. That was until I spoke with Lance at the recent Dauphine Libere race in France. All I said was, ‘Lance, I hope you don’t ride your bike again after July 24th until we meet in Calgary.’ His reply has ruined my summer when he said: ”Man, I’m gonna kick your Ass.!”

Seriously, I love this occasion, as do Lance and George. I am hoping George will feel, as Lance will have retired, no obligation to him and will help me complete the route instead.”

The Tour of Courage cancer fundraiser came about just over 2 years ago when a group of Calgary-based businessmen and cycling fans convinced Lance Armstrong to join their efforts as the keynote speaker at their 2003 fundraising gala dinner. That evening was a huge success, and Lance was happy to return in 2004 for an even more ambitious weekend of fundraising, that held both a sold out $500 per plate dinner for 1200 guests, and a very exclusive ride over the Highwood Pass (North America’s highest paved road) with Lance, George Hincapie, Chris Carmichael, Johan Bruyneel, and Phil Liggett, for 25 guests who donated $25,000 each. 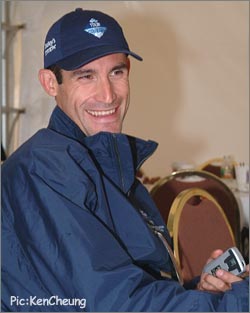 ”The tour of courage was a great experience last year, the organization was top notch. The cause is truly inspirational. The people around it, are a pleasure to work with…” George Hincapie will be back – possibly towing Phil Liggett on 2 days of scenic rides.

After last year’s event brought them within $1 million of their goal, and with Lance’s commitment to help reach that goal (given to Joe verbally while riding their bikes over the Highwood Pass), the organizers set about planning an event for 2005 that would be as memorable as it would be inspiring to command a suggested $35,000 Cdn per person suggested minimum donation to participate. 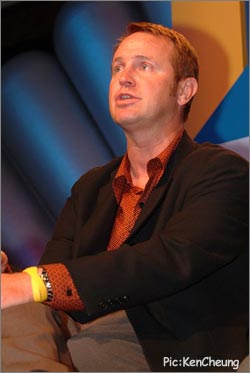 Chris Carmichael will be back too: “…because the people of
Calgary enthusiastically embraced Lance and his mission of finding a
cure for cancer. This is a personal issue for Lance and me. It was
amazing to witness the support for the event, and it was particularly moving because everyone was there for all the right reasons.

In finding a cure for a disease like cancer, time is of the essence, so the organizers went looking for a way to tap into Calgary’s corporate community (one of the richest in Canada) to reach their goal as quickly as possible. Support has been overwhelming, as the 30 reserved seats for the 2005 fundraiser have been spoken for since May, and a waiting list has been started.

You Want Unique?
“After the success of the past two years, we really thought about how we could raise the bar and make this year even more unique, and in particular make it special for Lance in one of his first post retirement appearances.” Said Dutton. He added: “For Lance to make the commitment to see us to the $6 million finish line really tells you something about his integrity and commitment to fighting the cancer battle.”

Try this on for size: About 30 lucky major donors will spend the weekend with Lance and friends (yup: George, Chris, Phil, and Johan) in Lake Louise, enjoying two days of riding with the 6 time Tour de France champ: 140km to the Columbia Ice Fields, and the 60km through the picturesque Bow Valley Parkway to Banff. Accommodations will be at the luxurious Post Hotel in stunning Lake Louise, Alberta, and guests will also enjoy intimate dinners with Lance and the guys to chill and chat.

Finally – PezCycling will be there as well – throwing our support behind the event and sharing the experience with readers, and to show you what’s cool about working together for a good cause.

Read more about the Calgary Tour of Courage:
1. Lance To Complete “Courage” Cancer Fundraising
2. Lance Back To Cancer Fundraiser
3. Liggett Joins Lance To Cure Cancer In Cowtown
4. Last year’s inaugural event was a huge success
5. Here’s How The Journey Began
6. Tour of Courage: the PEZ Report
Like PEZ? Why not subscribe to our weekly newsletter to receive updates and reminders on what's cool in road cycling?