The ‘star power’ possessed by Lance Armstrong is undeniable. Although I had my back to the rear entrance of the Thompson Room at Calgary’s Hyatt Regency hotel as Lance strode in with the organisers of the Tour of Courage fundraising event for a private meeting, you could feel the electricity in the room.

– Story and pictures by Geoffrey Mar – 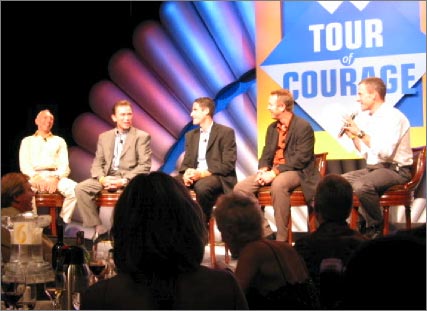 The theme was “teamwork”, and the guys answered a few questions from the audience.

The sequel to the ‘Beyond Courage’ gala fundraiser, held in November of last year was again, a resounding success with none of the approximately 1,000 seats going unsold. In its quest to raise $6 million to fund a ground-breaking research project at Calgary’s Tom Baker cancer centre investigating the effects of exercise on the onset, prognosis and treatment of various forms of cancer, the Tour of Courage organisers are within $500,000 of that lofty goal. Armstrong, too, noted that while he originally predicted that a total of $500,000 would be raised for cancer research by the now-famous ‘Livestrong’ yellow bracelet programme, the total raised by that effort currently stands at $14 million. There can be no better demonstration of the power of Lance Armstrong’s story.

It was Lance Armstrong himself who came up with the theme for Saturday’s theme: Teamwork. At his suggestion the other speakers for the evening included: Johan Bruyneel, the USPS Directeur Sportif, his personal coach, Chris Carmichael, and, George Hincapie, Lance’s stalwart companion at the Tour and a cycling star in his own right. The linkage between the strength of the Team at the Tour and the necessity for teamwork in the battle against cancer was not lost on this audience.

Last year, Lance chose to speak primarily about his battle with cancer. In that context, his relationship with the bike was shown to be intensely personal. On Saturday, the theme of teamwork and the parallels between the professional peloton made for a more interesting programme for followers of road racing. A self-confessed ‘bike-geek’, Lance joked about his attention to detail lust like many of us who follow the sport do, e-mailing Bruyneel before the TDF asking: “Hey! Did you see that photo of Jan on Pez? He looks fat!”

The main event of the evening, though, took the form of a question-and-answer period with the panel of guests being mediated by the ‘voice of cycling’ in the English-speaking world, Phil Liggett. From a series of pre-screened audience questions, carefully chosen to emphasise the duality of the concept of teamwork in both worlds, Lance and his Team relayed stories of their experiences.

Particularly poignant was Chris Carmichael’s response to the question: ‘What moment best describes your relationship with Lance?’ Choosing not to highlight those racing moments when Armstrong was at his best, Carmichael spoke of a moment just before Lance went under the surgeon’s knife to remove two tumours in his brain that threatened to end his life. Based upon the emotion welling-up in Chris’ voice and eyes as he described the exchange between the two men, (the specifics of which were not shared,) a clearer expression of the importance of teamwork in both pursuits could not have been presented.

At a private reception immediately prior to the event, I had the privilege of introducing Lance to eight-year-old Dayton Noel, whose own resolve in a battle with testicular cancer was inspired by Armstrong’s story. Watching the effect that Lance had on Dayton, who wants to race mountain bikes in the future, brought the message of evening full-circle: Lance is a member of the Team of every cancer patient.

Stay tuned for our full PEZ Report from behind the scenes at the Tour of Courage weekend, and Sunday’s ride over the Highwood Pass.
Like PEZ? Why not subscribe to our weekly newsletter to receive updates and reminders on what's cool in road cycling?