Roadside Reload: As the 2018 Tour de France gets ready to hammer round Paris for the final stage 21 we look back at Ed Hood’s 2015 trip to the French capital city. The rain fell heavily on the Champs Élesées on that Sunday in 2015, but that didn’t dampen Ed and Callum’s enthusiasm. The big Paris finalé. 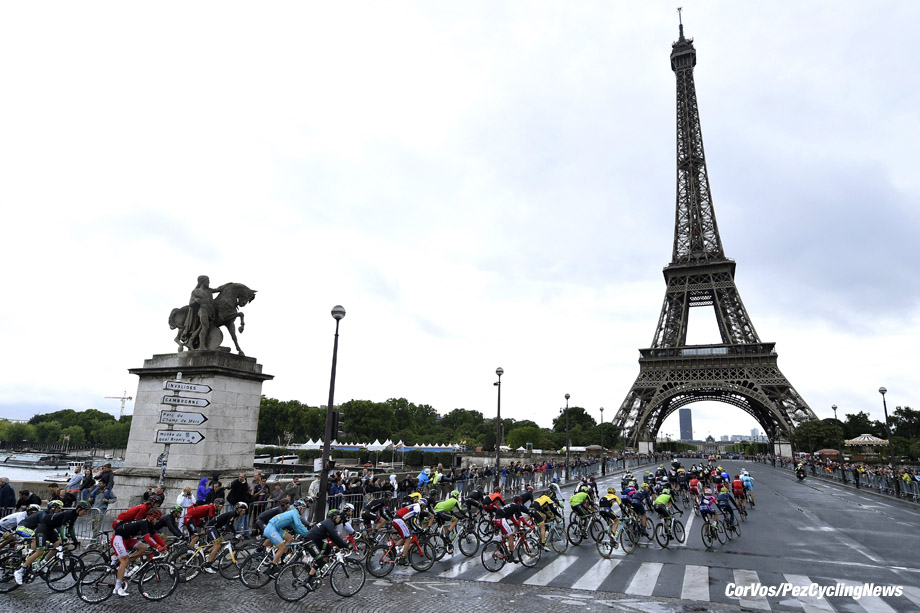 “You’ll Never Walk Alone” bellows from the open door of the Sky team bus – the maillot jaune’s boys have found their voices. A Liverpool football anthem just off the Rue de Rivoli – a street no longer as chic as it once was but an incongruous sound, nonetheless.

The evening sun shines on the golden dome of Les Invalides, over to my left; a wonderful sight but surreal among the myriad computer generated logos of the products the Tour helps market. The cobbles of the Rue Royale are still damp from the rain, my feet are wet and cold. It all feels strange, I still can’t quite take it in; as a younger man I used to think that I’d never live to see a British Tour de France winner. I’ve now see three in four years. 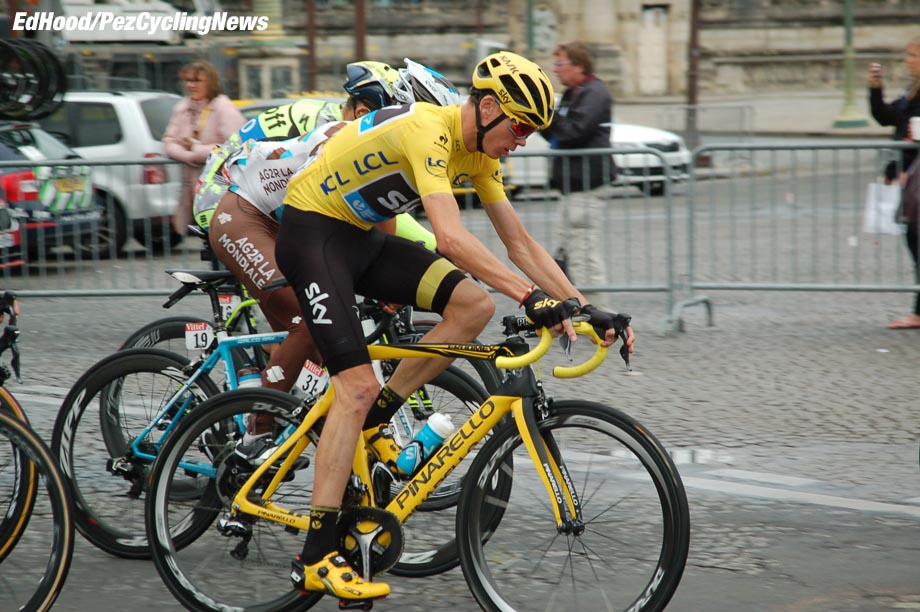 To win Le Tour de France is a marvellous achievement which Christopher Froome has achieved twice. But I have to say that it was not a memorable Tour; there were stage winners of great individual merit – Greipel, Cummings, Bardet, Pinot. . .

But the GC battle only sparked at the very end – the last stage reflected the whole Tour. I grant that the rain didn’t help but there were far fewer fans than normal, very little colour and racing which somehow lacked the frenzy we’d expect on the Champs. 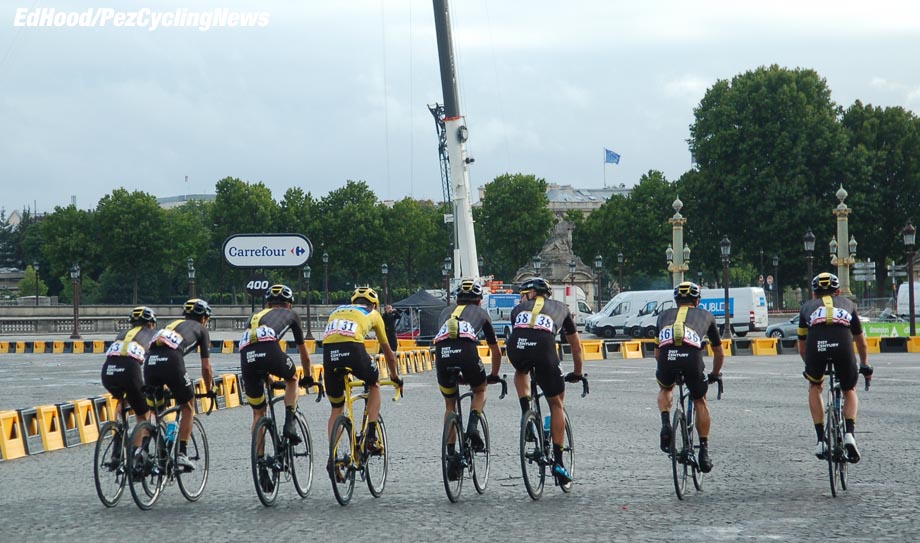 The field split late on and Froome and his team rode in ‘formation flight’ at the back – none of it seemed right to me. It used to be a matter of honour not to get dropped on the Champs – now it would appear to be ‘whatever!’

Let’s take a look at our day on perhaps the world’s most famous cobbles: 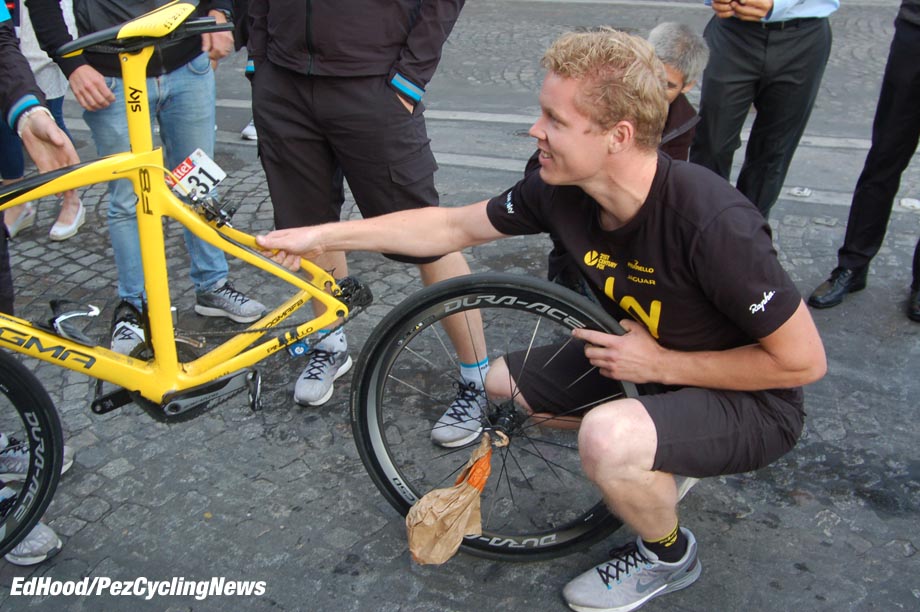 Let’s start with a PEZclusive. It was a McDonald’s bag which caused Froome’s mechanical woes on the finish circuit. How do we know? We were there when the mechanic extricated it. Unfortunately we don’t know if the purchaser ‘went large?’ 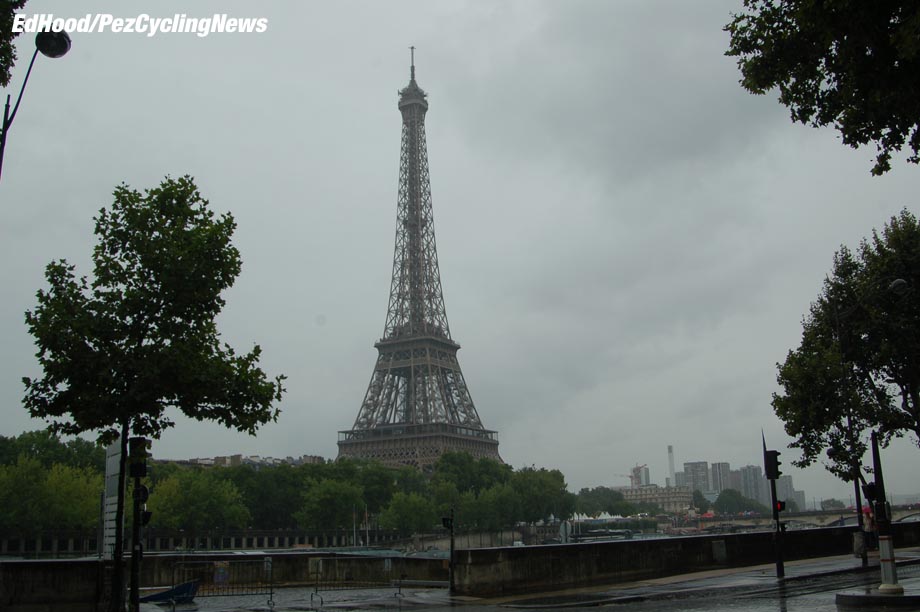 It was a grey old day in Gay Paris but Gustave’s creation is still as impressive as the day it was opened in 1889 and not snapping it is not an option. 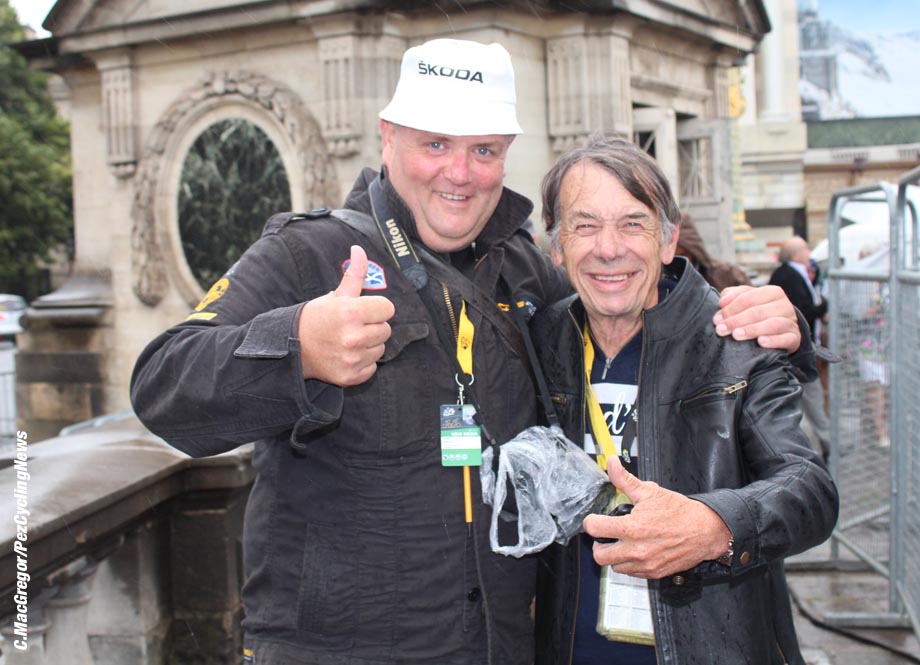 And it was a day to meet old friends – John Trevorrow over from Oz with ViP’s from Orica-GreenEDGE. One of the world’s best amateur’s ‘when I were lad,’ he brightened that Paris drizzle a little for me with his Oz chat and smile 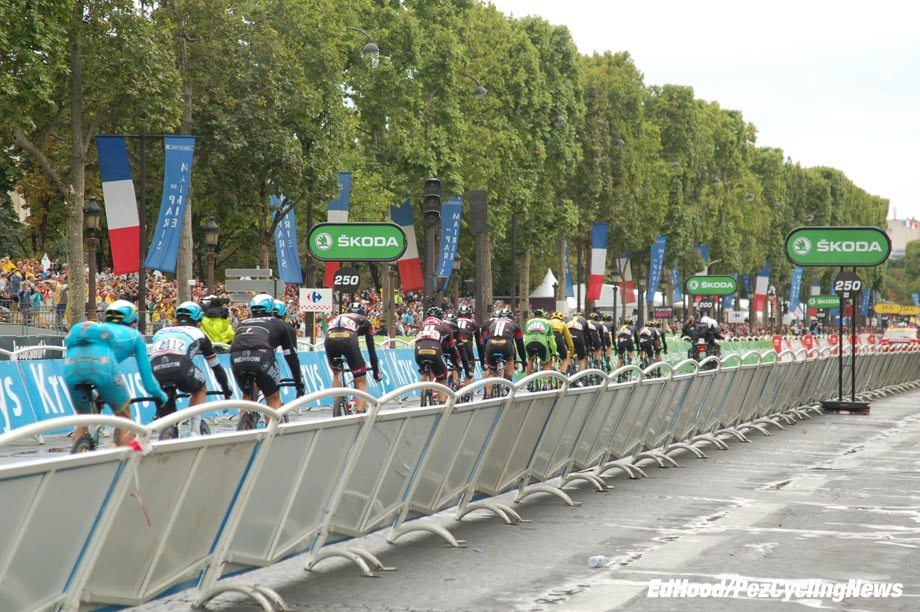 The early laps were taken gingerly, no one wants to come down at this stage of the game – those granite sets are slippery and HARD. 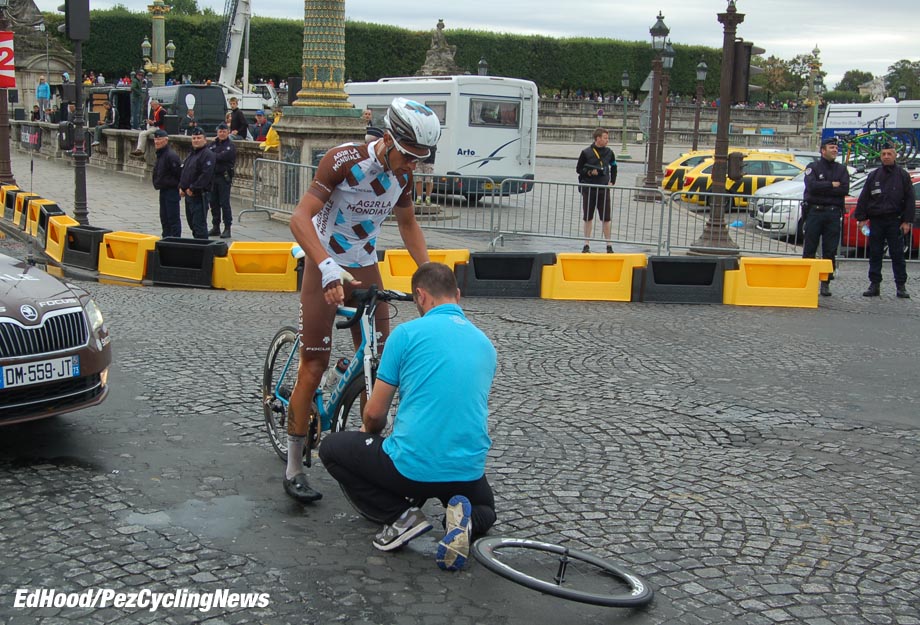 And there was another PEZclusive, this AG2R punctured in front of us, I wandered over and got the pic.

“One time – but NO second time !” the cop with the evil eyes barked at me as I ambled back off the circuit – I moved on, smartly . . . 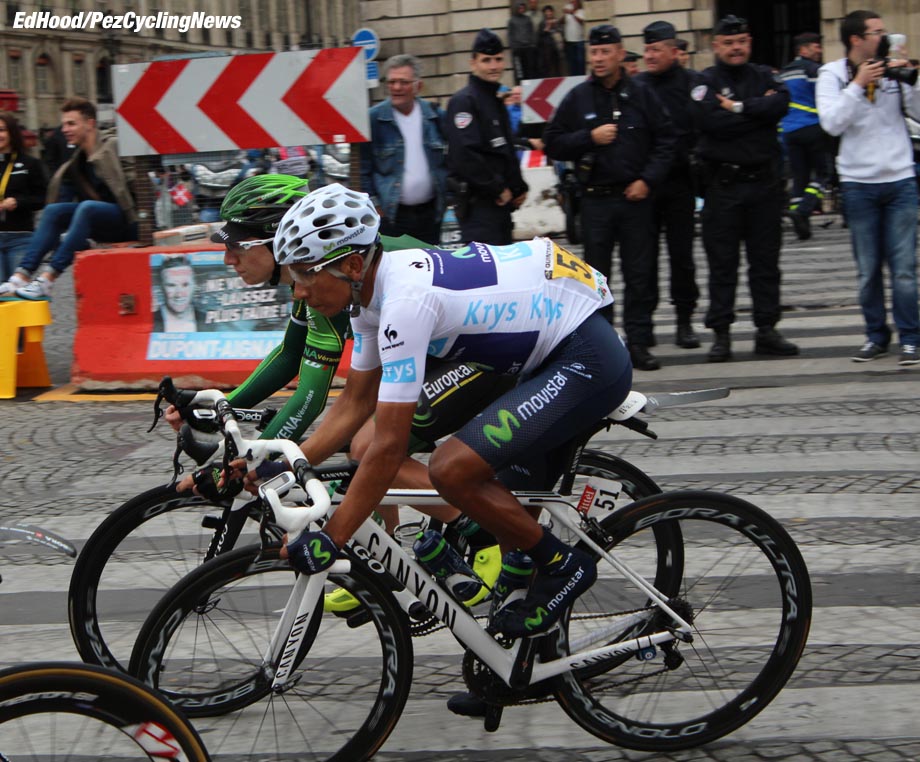 For a man who’s supposed to be a poor bike handler – just like those Colombians back in the 80’s – Quintana handled the early Tour cobbles well and was assured on them again, today. 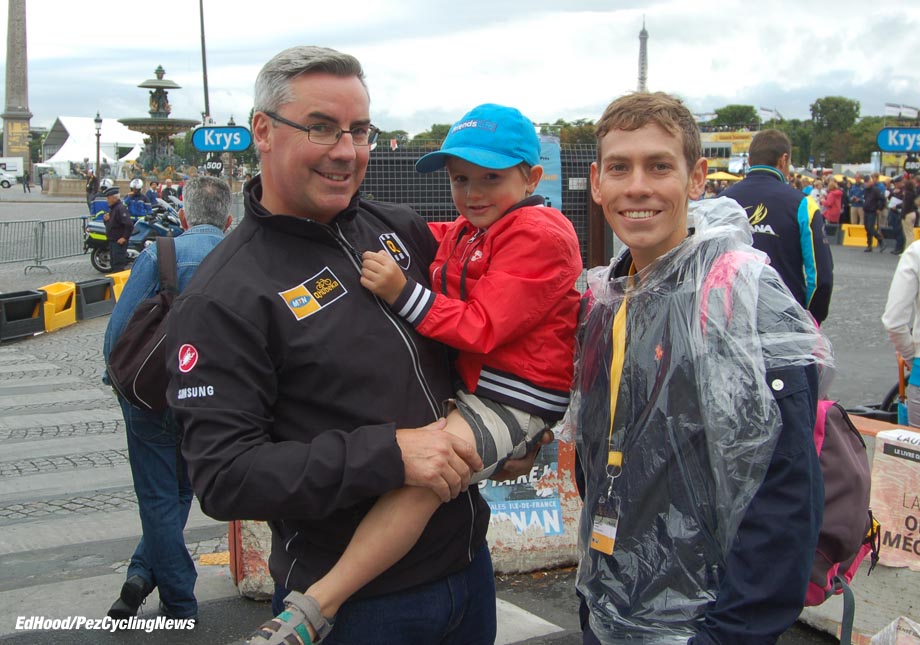 And who’s that chap with Brian Smith, the MTN manager? It’s MTN’s Louis Meintjes, still not right after his tummy problems and two nights in hospital – which caused his abandonment – but much better than he has been. Brian had him round the circuit in the team car – next year, Louis . . . 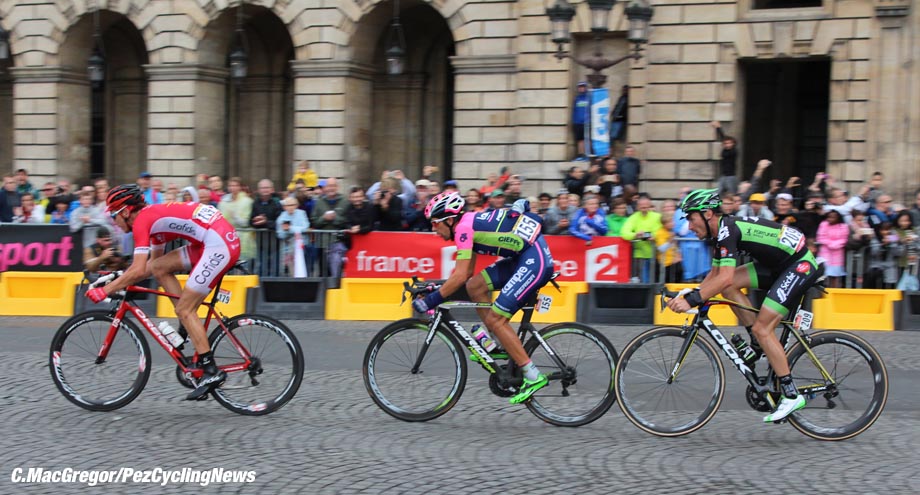 A break of three clipped of on a suicide mission but at least it gave the crowd something to cheer about. It’s hard to stay away on this circuit albeit the likes of Eddy Seignieur and Vino have done it. But in these days of sprint trains – it ain’t easy! 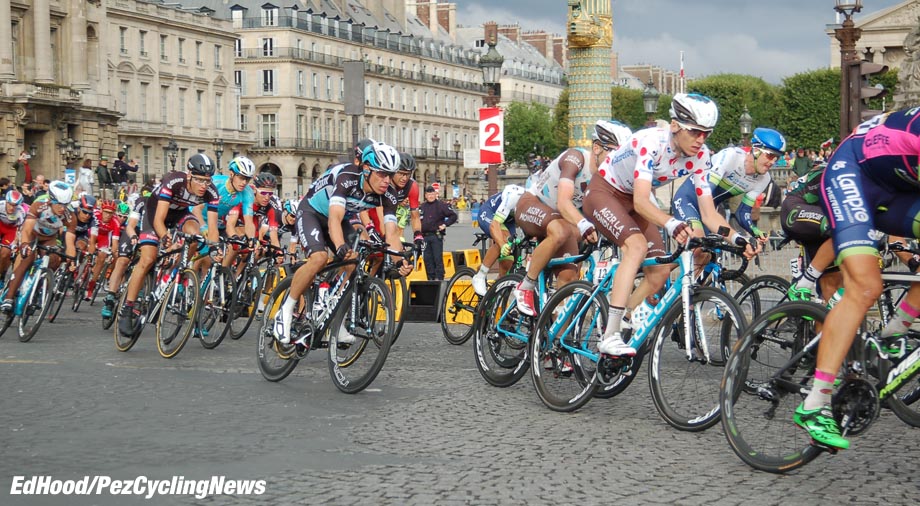 No hills today but Bardet was back ‘en poids’ for a few hours – Froome is the rightful owner but Bardet is second, the sponsors need their VFM and one jersey not fitting Christopher in enough, thank you. 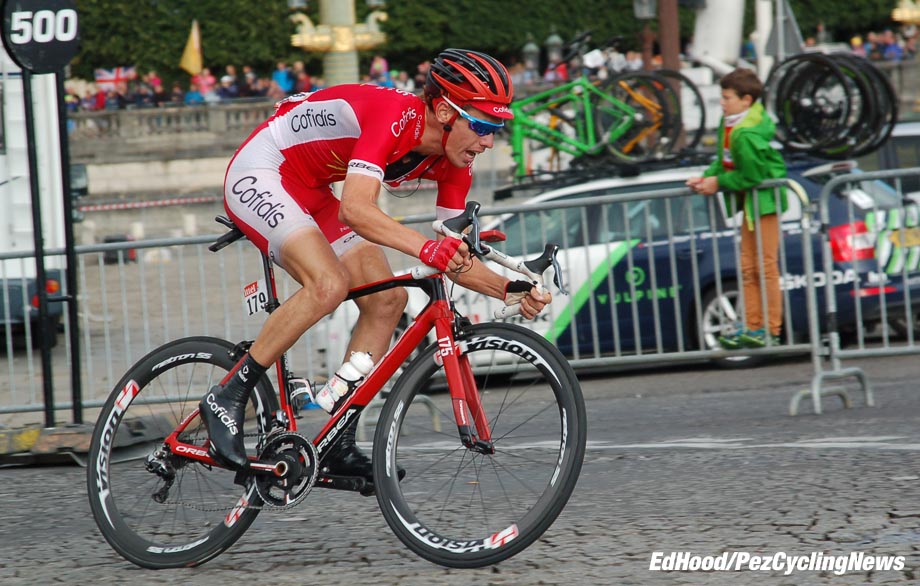 Meanwhiles – the break splintered and it was Cofidis’ ‘en seule’ trying to save the team’s Tour. Slim chance. 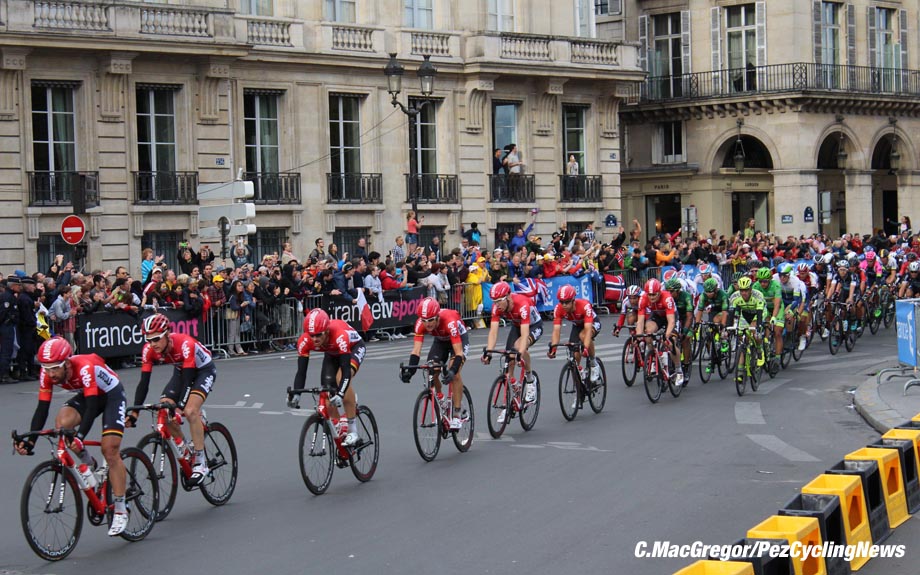 Those Large Lotto power houses were setting up the big man from Rostock – generally gorillas don’t thrive on the Baltic coast but this one does. He took his fourth success of the race and it looks more and more like Cav will be out of QuickStep as each day goes by. 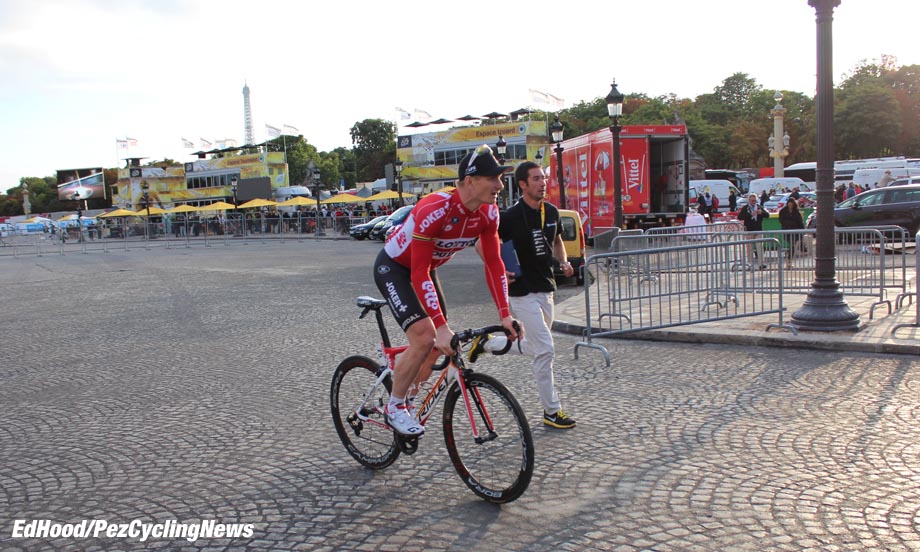 Greipel has been on fire, this Tour with his four wins; his new early season programme – where he didn’t ride the Tour Down Under – has worked well for him. 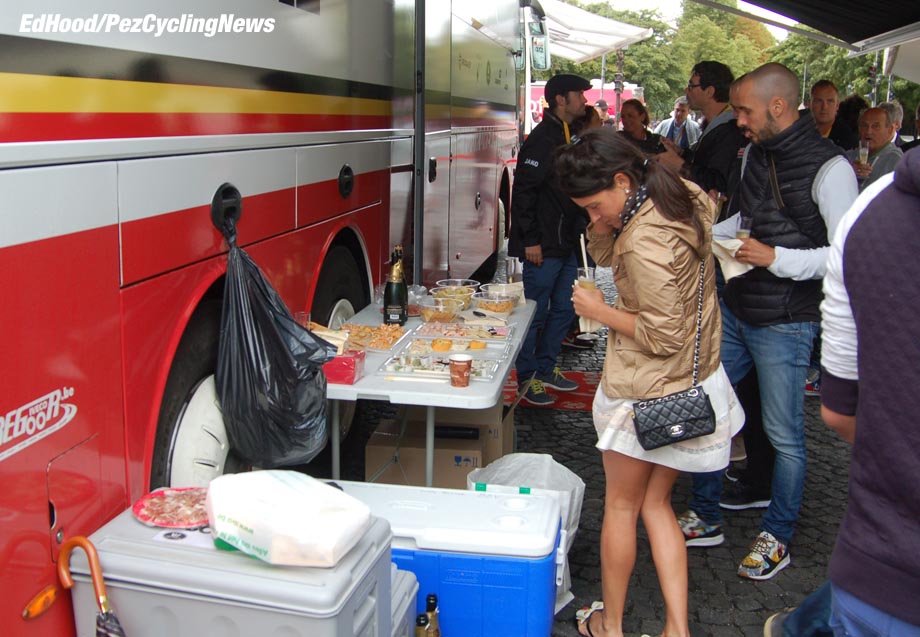 And whilst Andre was out doing the biz, back at the bus the buffet was ready – maybe one day we’ll get an invite to a ‘bus party?’ That cheese and champers looked good. A fabulous Tour for Lotto – four stages in the bag and representation in just about every break. But there were more pictures to snap. . . 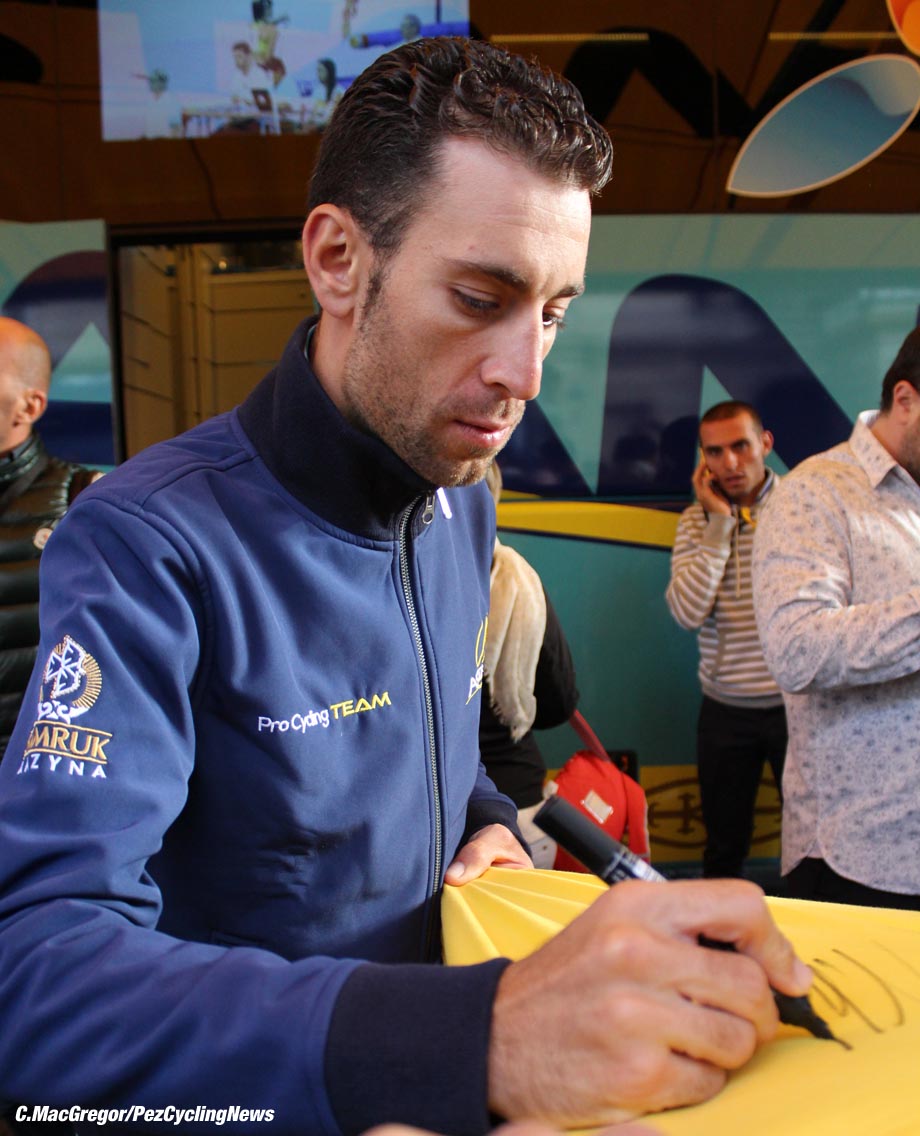 Vincenzo salvaged his Tour with a well taken late stage win so was able to smile after the race. Callum and I were debating why the man from Sicilia wasn’t himself ‘en France’ – too many receptions and canapes over the winter as a Tour de France winner on the celebrity circuit, maybe? If it was then you can be assure he’ll be back next year lean and mean. And Astana, who were such a force in the Giro, were no match for Sky or Movistar. 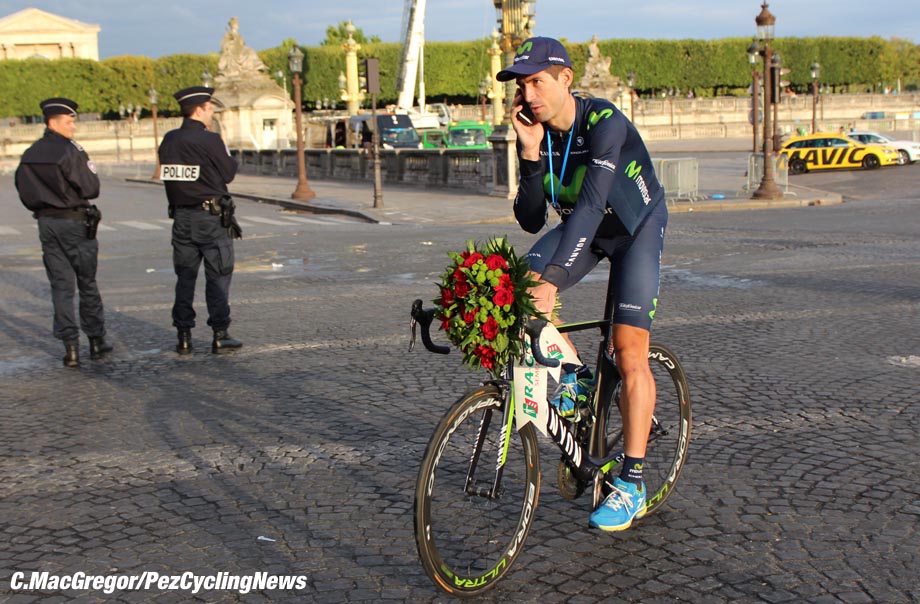 The Spanish boys ran away with the team prize as well as placing two on the podium and taking white – flowers all round for the ‘Telephone Squad.’ 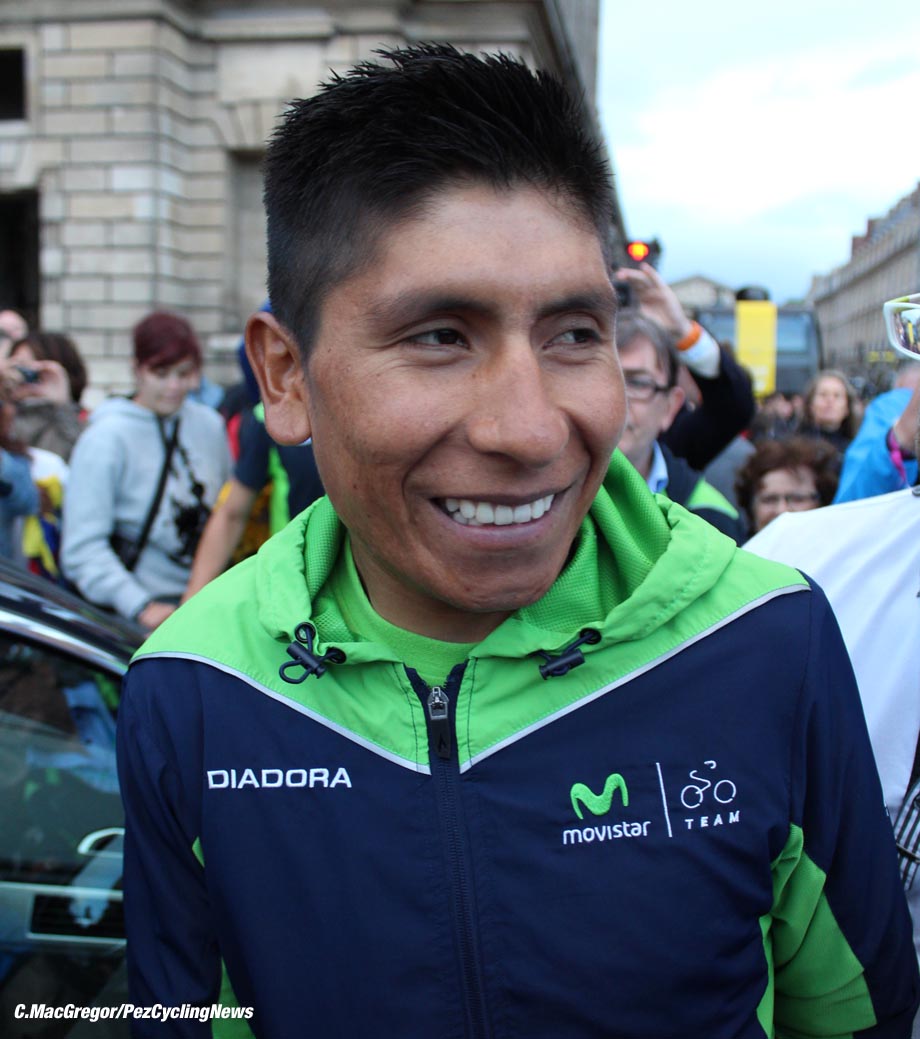 And you can be sure that Quintana won’t leave it as late to make his move in 2016. Manager Unzué is a very shrewd man, he’s been winning this race since the Day’s of Delgado – he can wait another year. . . 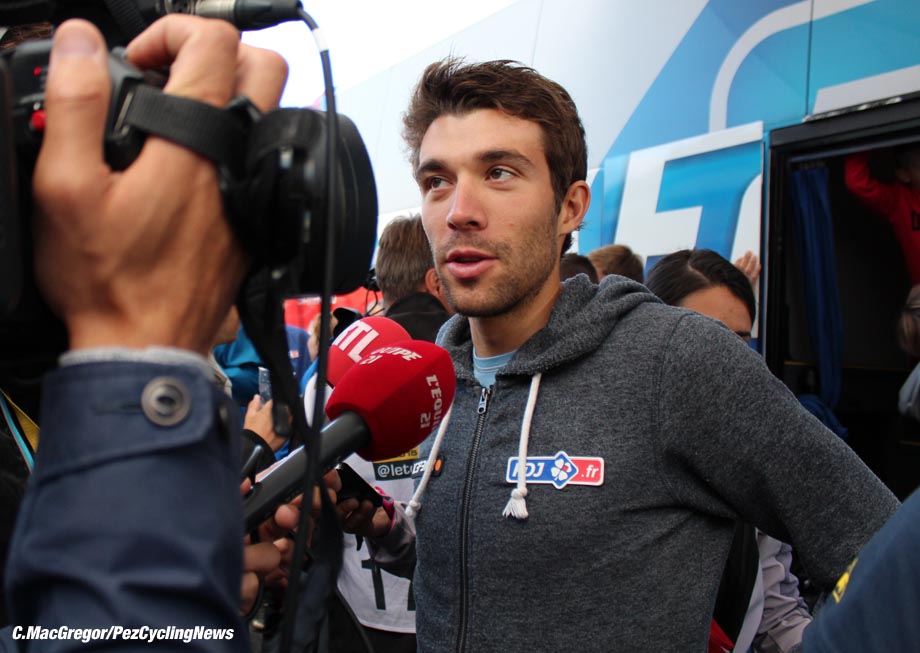 Like ‘The Shark’ another man who went from ‘zero to hero’ with a brilliant ‘late goal’ was the man in washing powder ad. white, Thibaut Pinot – his ride on L’Alpe made him only the fourth Frenchman to win on the ‘Dutch Mountain’ after Hinault, Rolland and Riblon. He deserved to look happy and relaxed recounting that short but dramatic stage which saved his and F des J’s Tour. His podium place last year flattered to deceive in a Tour which had lost both Contador and Froome but this win will have done his flighty confidence no harm – but we’ll have to wait another year to know for sure. 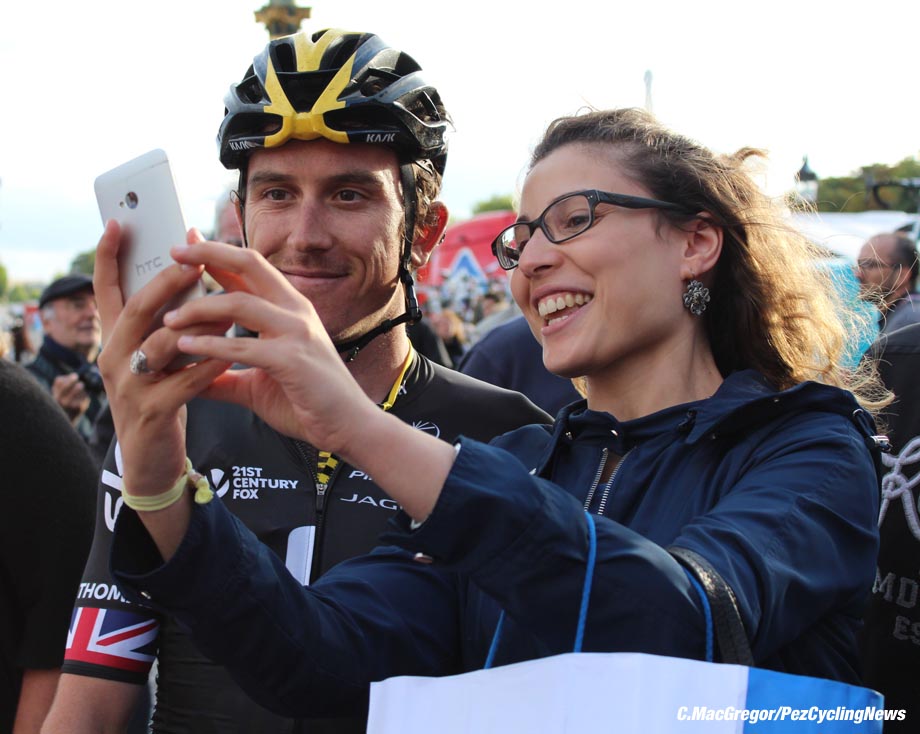 But the race was won by Froome and his men – a modern team in a modern world; ‘selfie please, G !’ 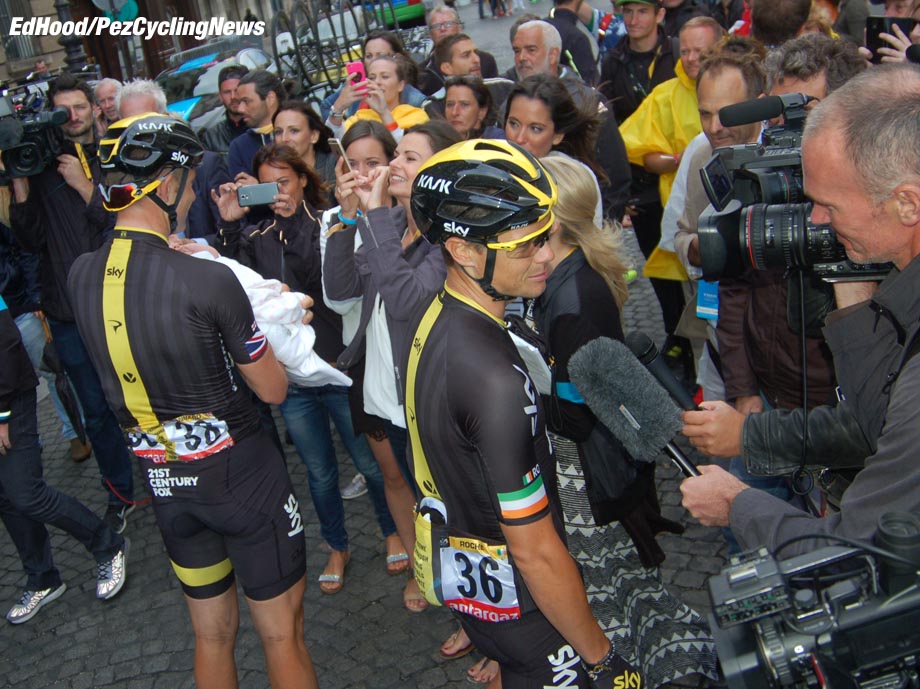 First back at the bus was Nico Roche, handsome, smiling and much in demand for interviews. Next was big Ian Stannard – a strong man for the Flatlands and here left holding the baby. . . 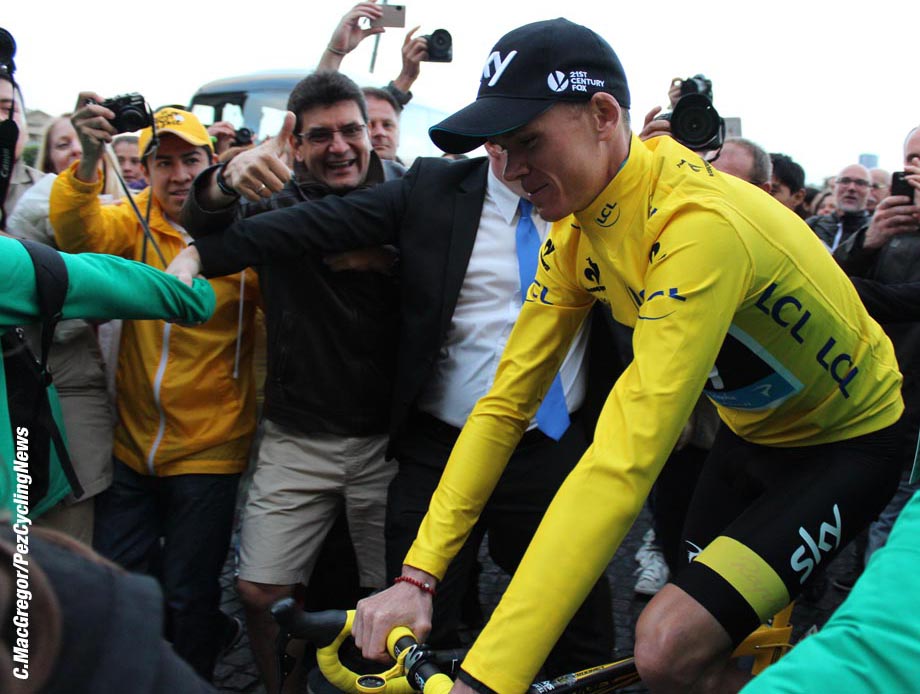 It took Froome/Vroome/Froome Dog a while to get back to the bus – but Callum was waiting to get the final picture. Congratulations to Christopher Froome, his team and that man Brailsford who dared to dream and has amazed me, for one.

I hope you’ve enjoyed our words and pictures as much as we’ve enjoyed bringing you them. My tenth Tour in the bag for PEZ, wow!

Thanks to – you most of all, for reading; Richard Pestes for letting me loose in France again; Al Hamilton for brilliant editing; Callum for the driving, pics and putting up with me on this Tour and to Dave and Martin for doing likewise on the last nine Grande Boucle.