Tour Roadside Stage 1: After the fun of the teams’ presentation, Leslie Reissner had his Tour de France time trial baptism in the rain of Düsseldorf on Saturday. Leslie braved the deluge to catch a full day of action from the warm-up right through to the race climax. The rain in Germany falls mainly on the Rhine! 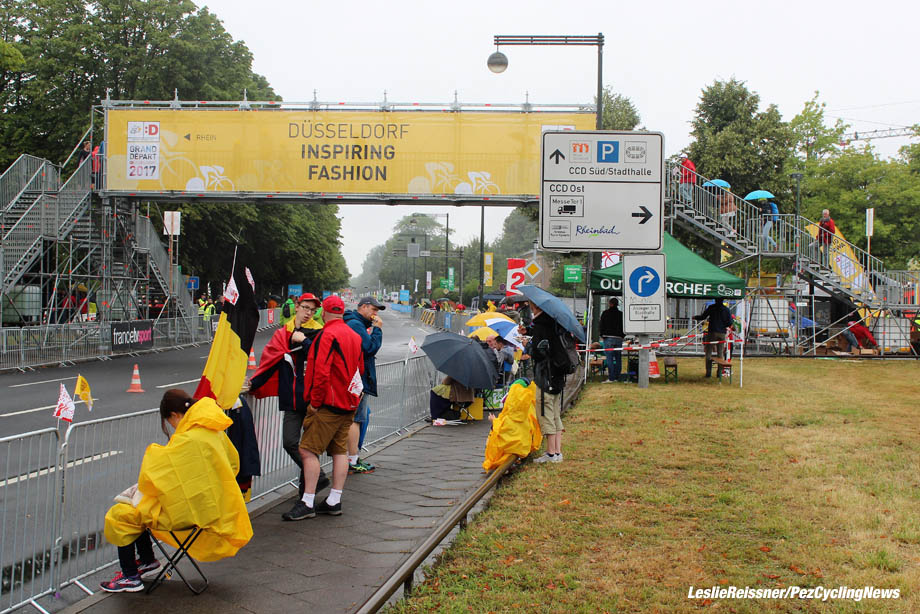 After several days of decent weather, July 1 and the launch of the Tour de France saw cloudy skies and then rain throughout the day as the 14 km Prologue took place from the Düsseldorf Messe commercial fairgrounds to the centre of the city and back. The crowds lining the streets, outfitted with umbrellas and rain ponchos, were still hotly enthusiastic as the “Heroes of the Roads” tore by. 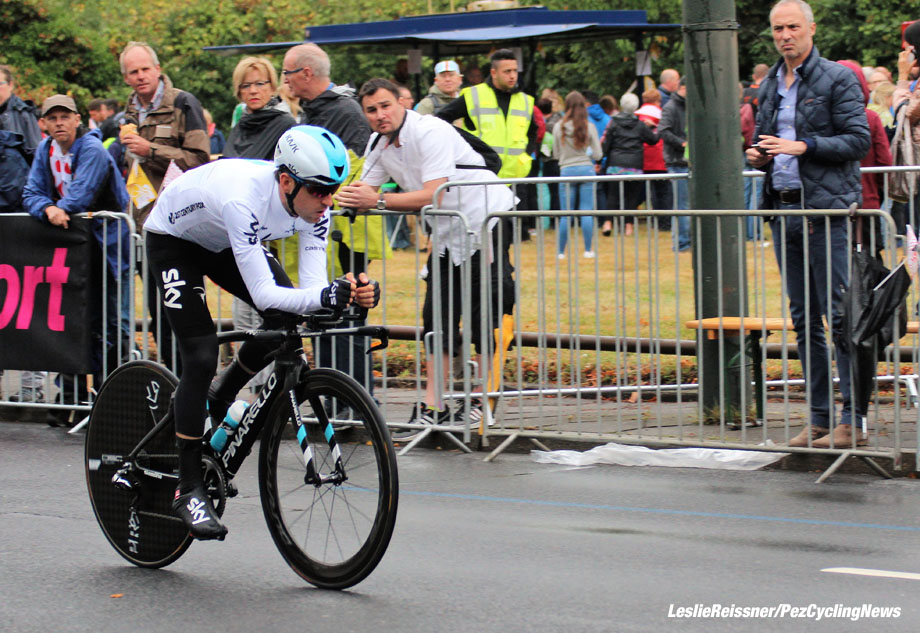 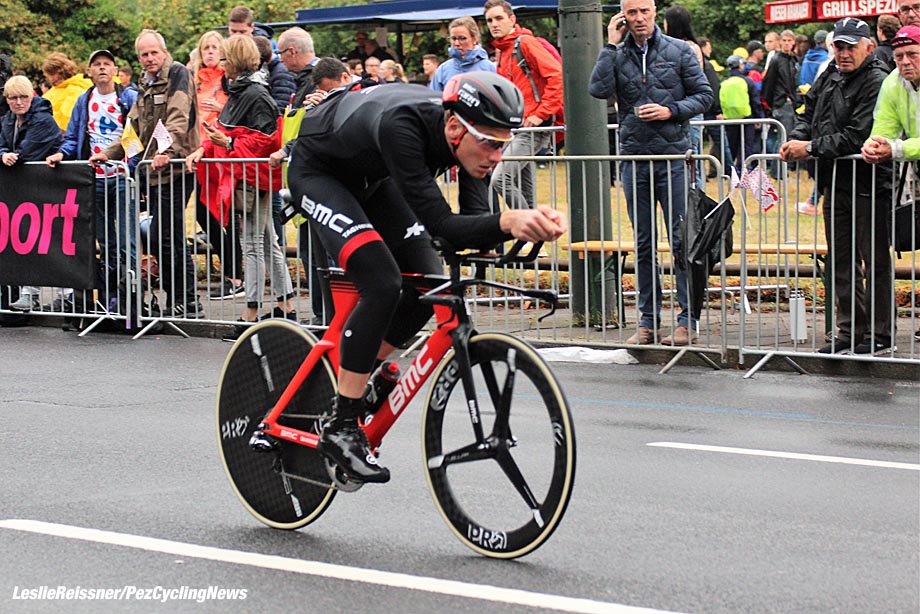 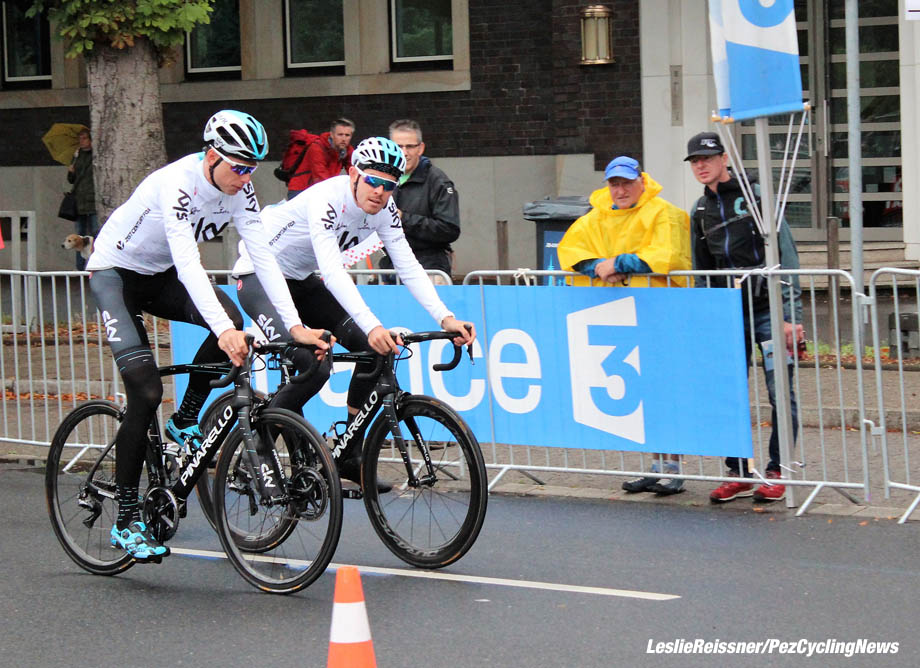 The course was closed the night before to traffic and public transit worked well as fans arrived already at noon. In addition to the sausage and beer tents, there was some activity to enjoy as official vehicles were seen moving up and down the course. There were VIP bike rides arranged on behalf of sponsors and people who could have never been mistaken for Chris Froome had the opportunity to ride the course (provided that they maintained an average of, uh, 28 km/h) and there were lots of happy faces on the return, with cellphone selfies being taken much in evidence. 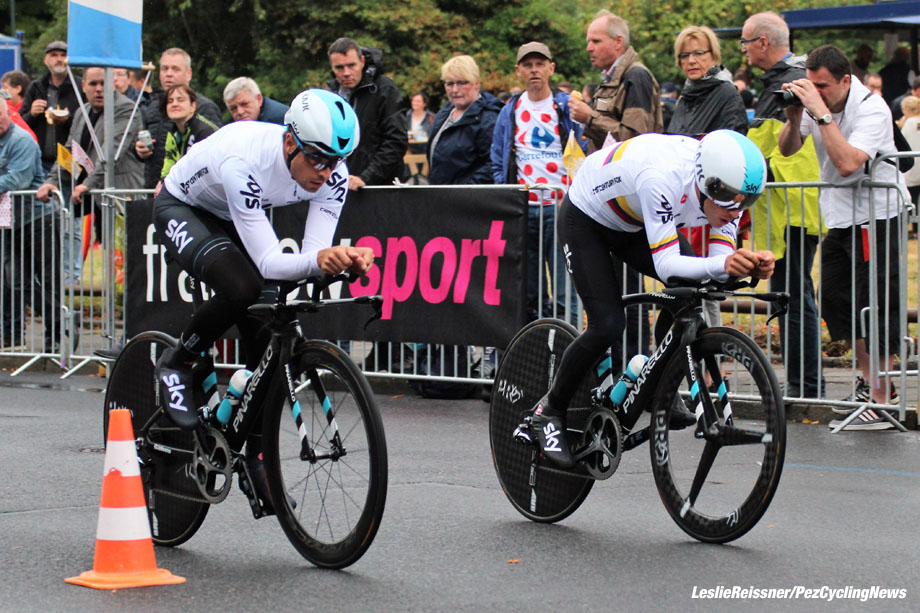 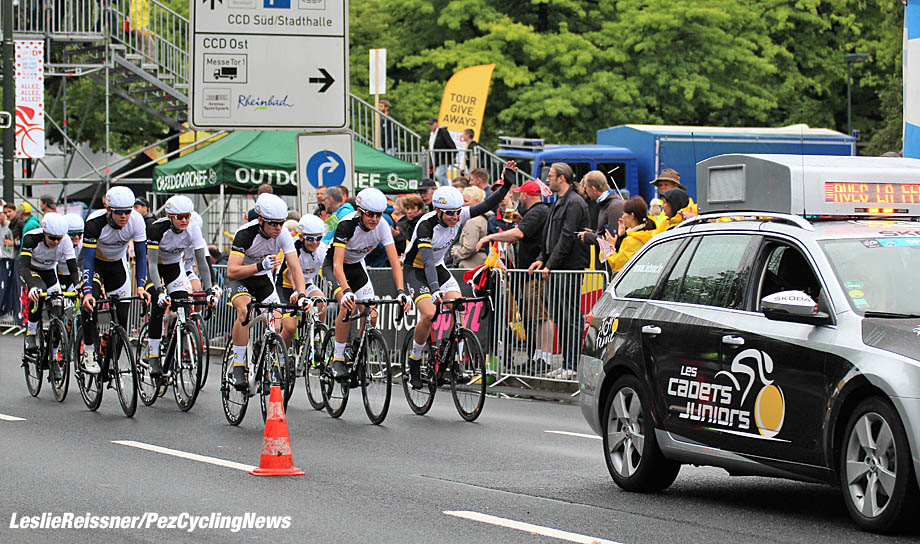 In addition to the amateurs, there was a group of junior riders brought by the Tour management itself (“Les Cadets du Tour”) and fans could also enjoy the pros warming up. Team Sky was much in evidence and local favorite Andre Greipel was cheered on too. Astana rode by en masse, but the team car had to wait briefly as Fabio Aru took off is warm-up jacket, revealing his Italian National Champion colors for all to admire. There were other individual riders testing the course, which at this point was pretty dry. 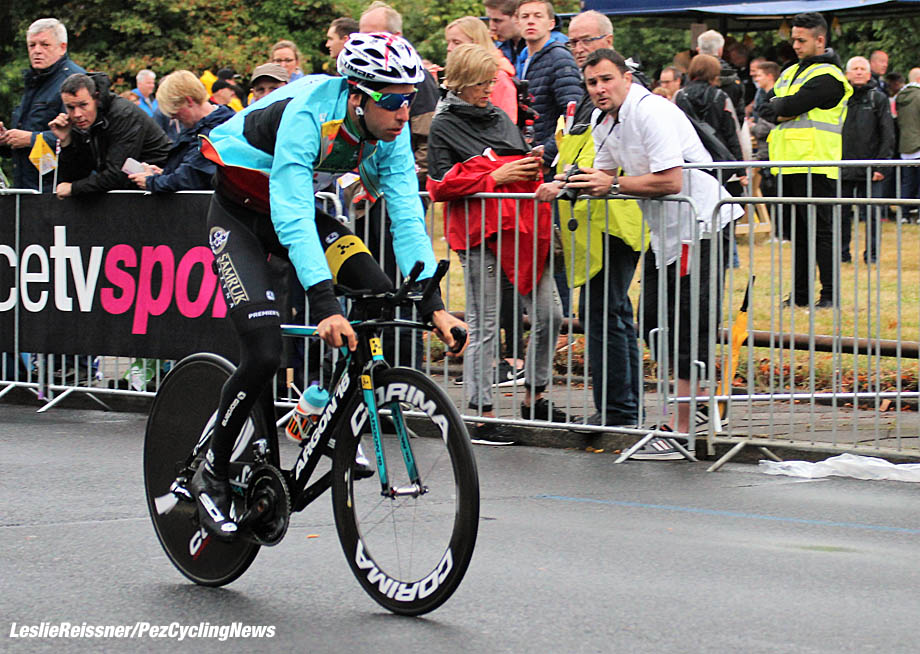 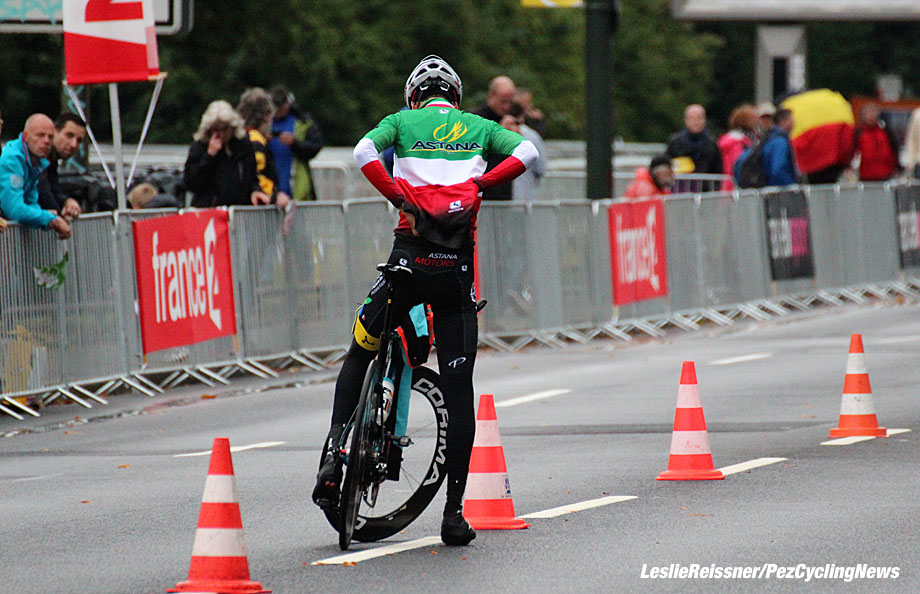 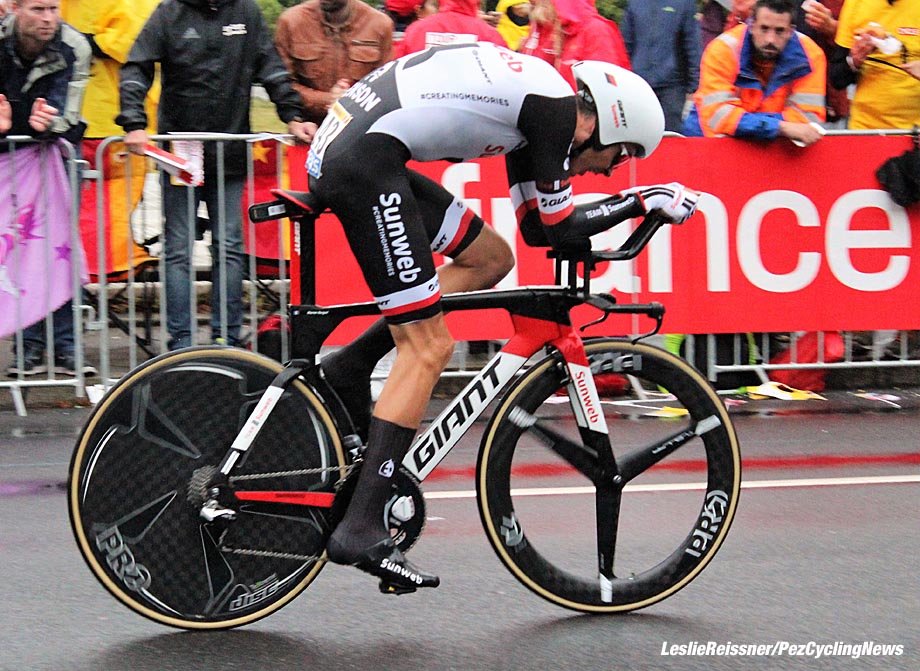 The actual event began after 3 pm and the skies had turned threatening. By now the sides of the road were filled with fans, although only to a level two deep along the barriers near the Messe as the weather was clearly keeping the numbers below what the city planners had hoped. But the noise and color of the Tour as it launched racing for 2017 could not be diminished and each rider was enthusiastically cheered on as he headed south and then again a quarter of an hour later as he passed north, returning to the Messe and the finish line. 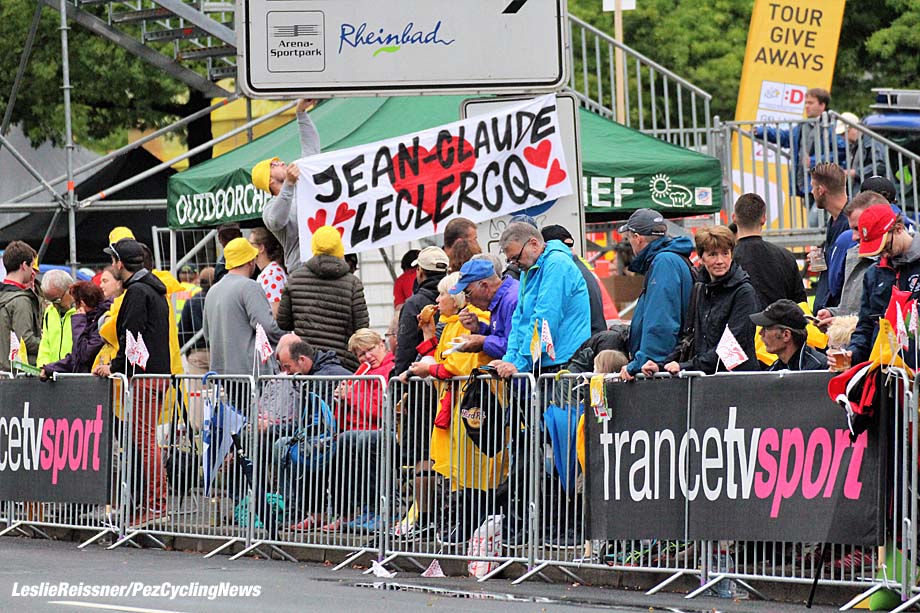 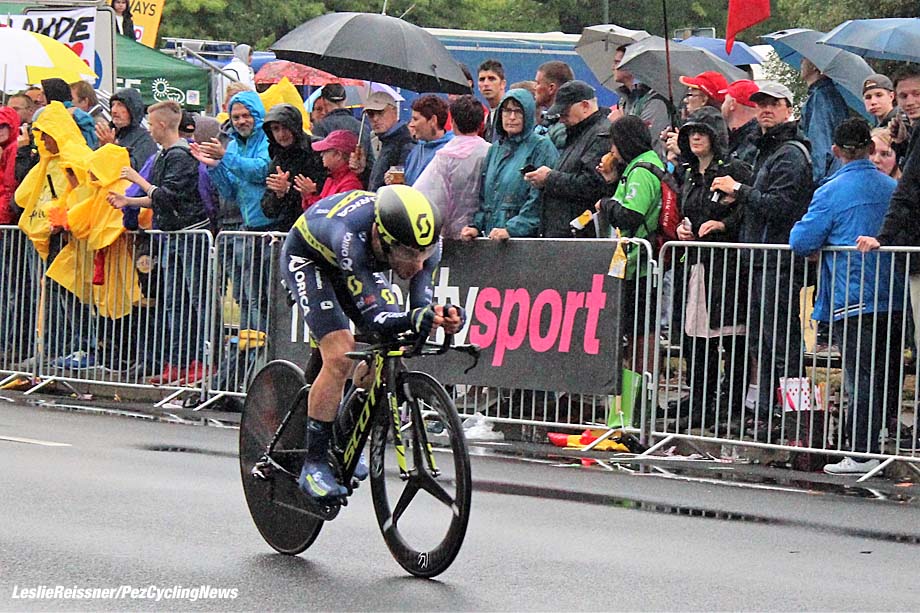 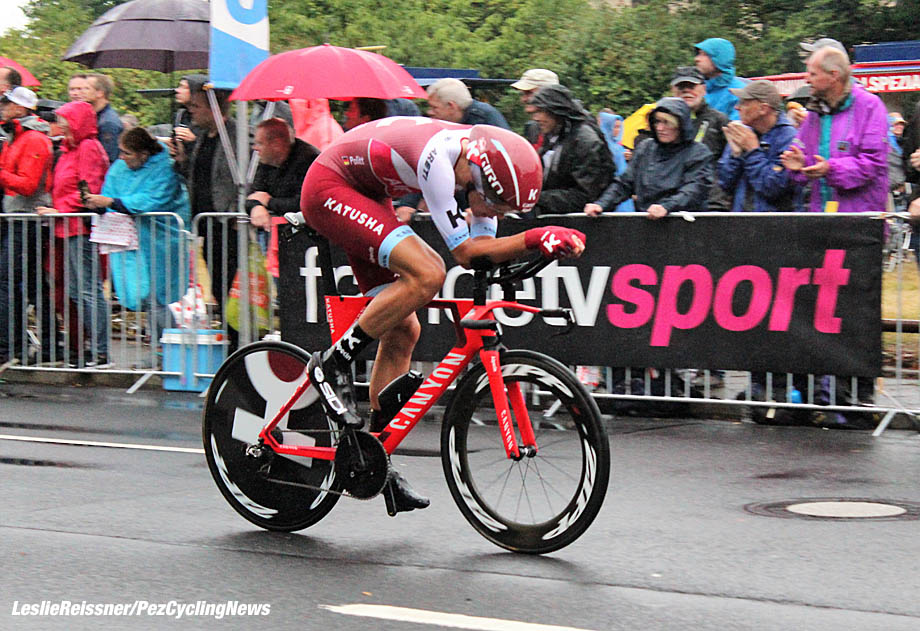 As the more competitive time triallists appeared closer to 6 pm, the weather worsened and the rain fell heavily. There had been a few crashes on the now-slippery course. Alejandro Valverde, who had received a huge ovation as he passed, saw his Tour end after only a few kilometers as he slid through a corner and hit the barrier, fractured his kneecap. Another Spaniard, Ion Izagirre, of Bahrain-Merida, also saw his hope for Tour glory dashed as he had to abandon as well. Lesser injuries were suffered by several others but as the rain poured down it was clear that later riders were being more cautious. 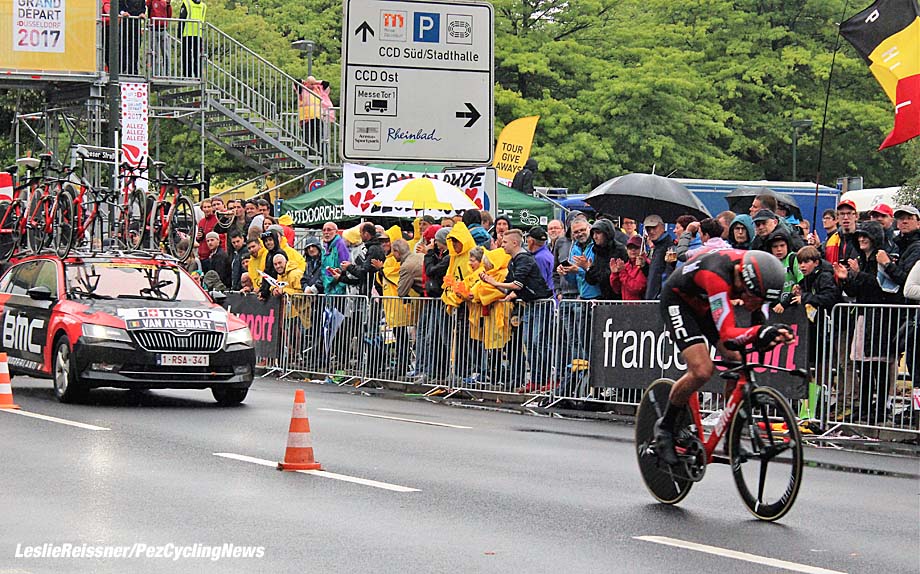 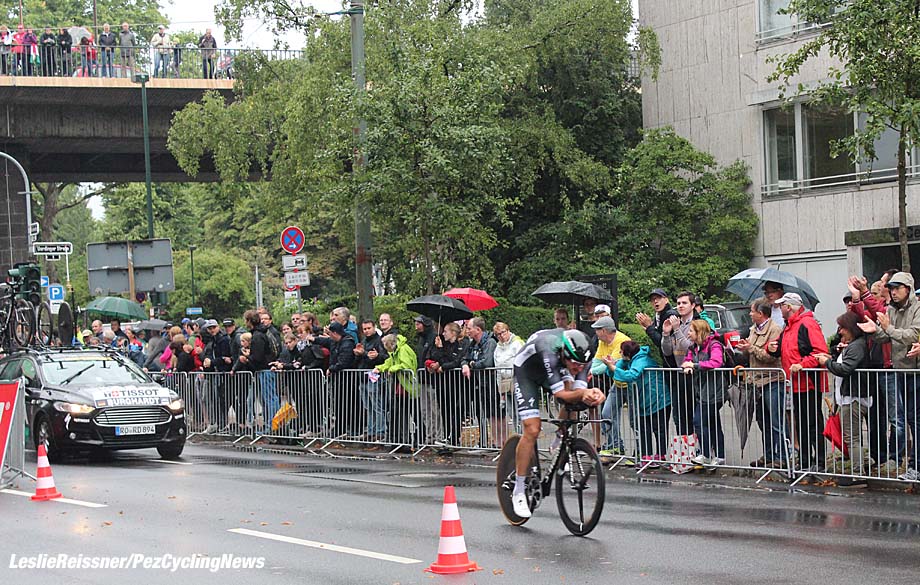 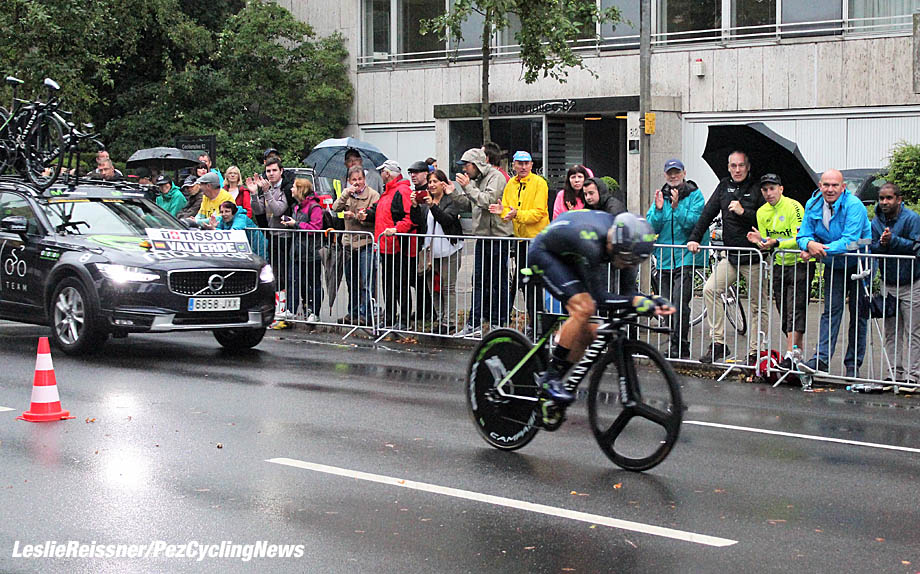 One of these was favored rider Tony Martin. The reigning Time Trial World Champion looked fast and managed a 1 second lead at the intermediate time but was not able to increase the lead and German hopes died. Earlier in the race his countryman Team Sunweb’s Nikias Arndt had occupied the hot seat for quite a while, ultimately finishing 11th, but at the end of the dark, wet day on the Rhine it was Geraint Thomas who triumphed with a superb ride, one of four Team Sky riders in the Top 10. Second place when to Switzerland’s rising star Stefan Küng of BMC, a 23 year old in his first Tour de France. 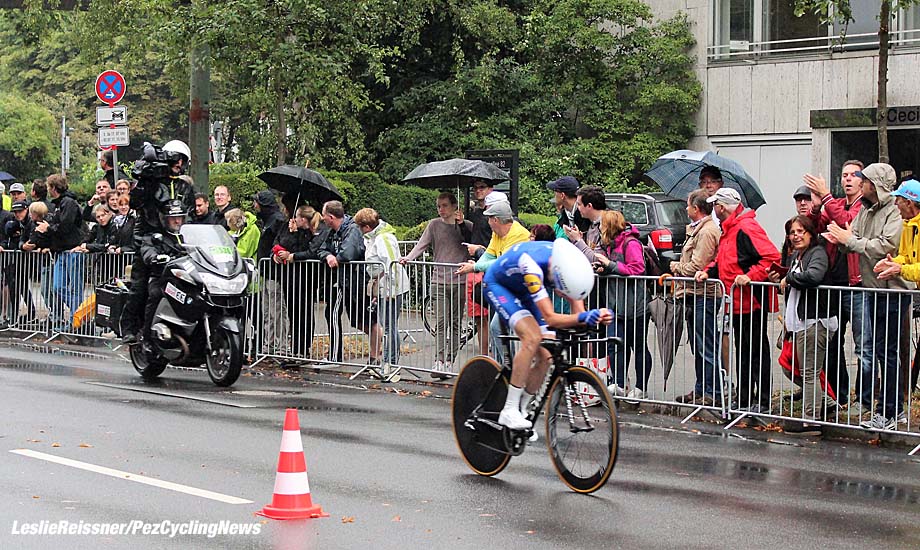 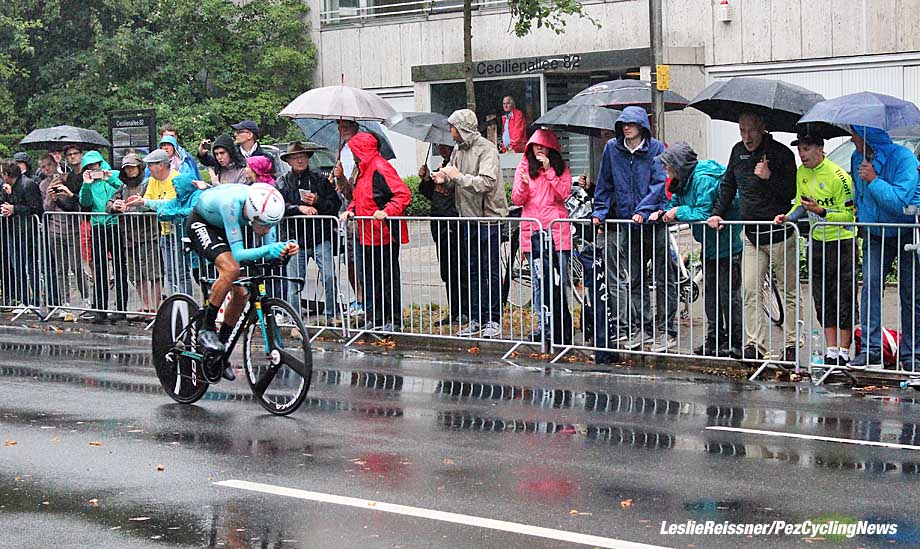 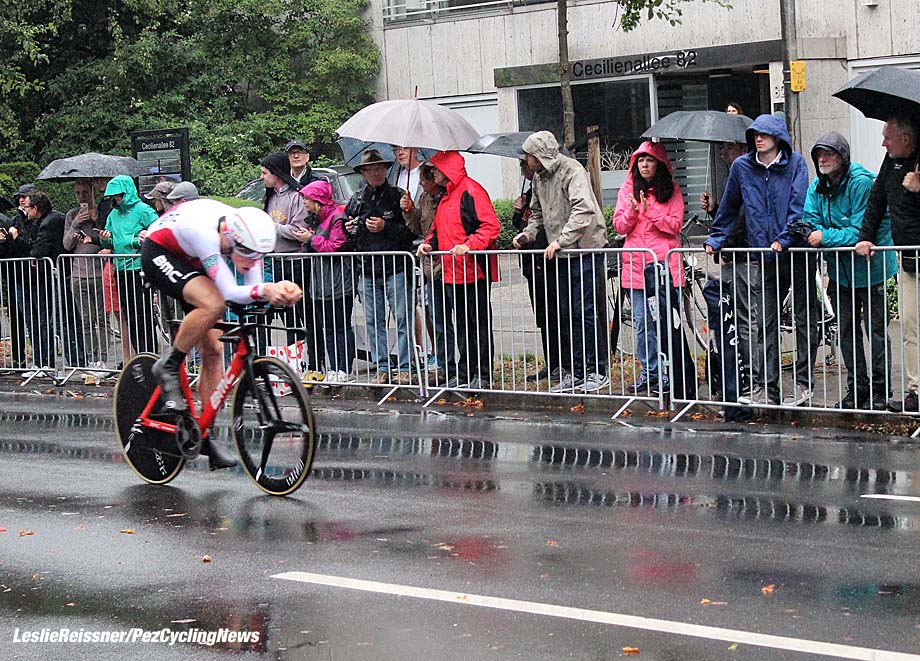 Of course, as the final rider, Chris Froome, rolled in to the finish line the rain stopped and the skies began to clear. In terms of a course designed for maximum spectator appeal, the organizers had chosen well. Now it was time to head to the Ehrenhof and party on at the sold-out Kraftwerk concert! An exciting day of racing that may have had much more of an effect on the ultimate outcome of the 2017 Tour de France than would have been expected from a flat 14 km course. 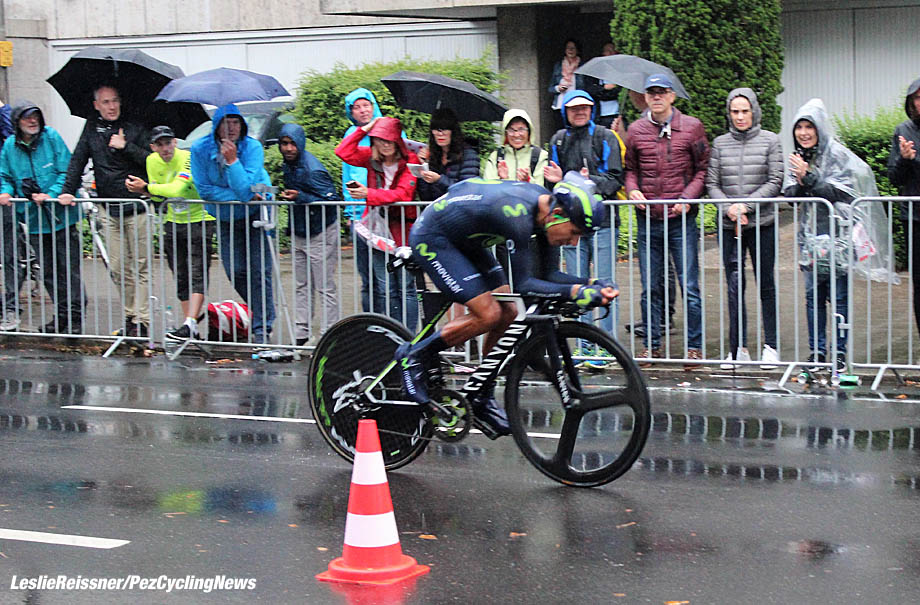 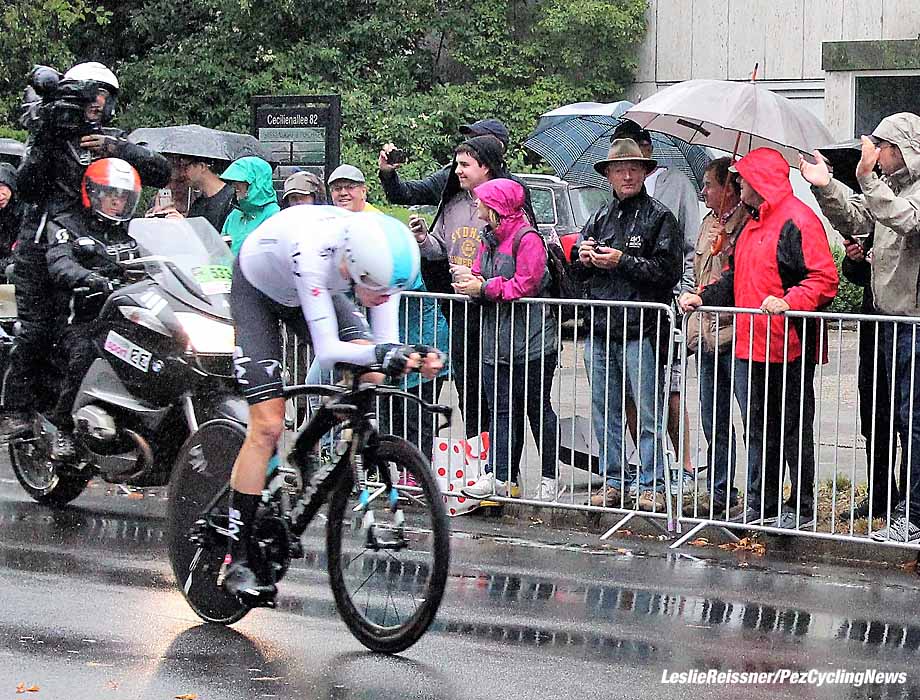 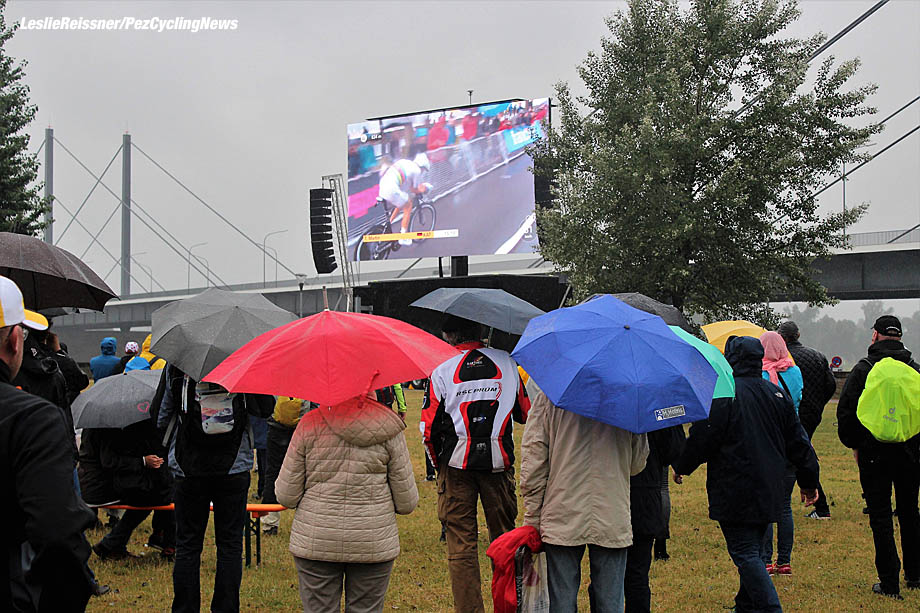 When not standing around damply, Leslie Reissner may be found at www.tindonkey.com