Last night I rode the track for the first time. Ever. I’m still buzzing. Dreamt in circles all night, round and round, like those daredevil thrill-guys you see riding motos inside the cage at the circus! You should try this…

It’s 4:00 PM Monday afternoon and the track is open for riding. Nothing really organized for today, but a dozen riders show up to spin and speed their way through a rainy November workout. No matter the weather – we’re inside – inside North America’s only covered velodrome – very nice! 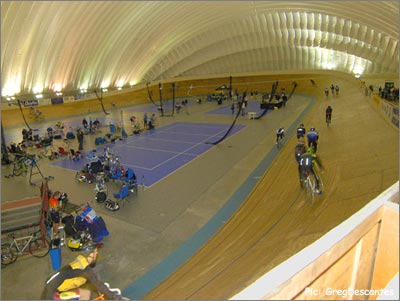 Inside the Burnaby Velodrome – 200 meters of pure, adrenalized wood.

It Lives!
Just 20 minutes east of Vancouver, the Burnaby Velodrome reopened again last year after it’s first uncertain years of existence. The facility was built between 1991 and 1997 – a true labor of love created by Cycling BC and a lot of dedicated volunteers, piecing together funding from various and inconsistent sources, building the track themselves on evenings and weekends. The facility, originally intended as a cycling exclusive venue, currently shares space with the provincial volleyball association to defer costs.

Being a diehard road guy, I was aware of the track, and often wondered what it was like to ride, but never really had the chance to get “on boards”. That all changed when I got an email from Gord Ross, v.p. of the Burnaby Velodrome Club, inviting me to check out the revitalized facility. Barely breathing 18 months ago, the track is now full of life, open 6 days a week, hosting training sessions, races, and a lot of learn to ride courses for the growing number of enthusiasts in the area. It’s getting so popular, that the first night I dropped in, the beginners’ course was filled over capacity! 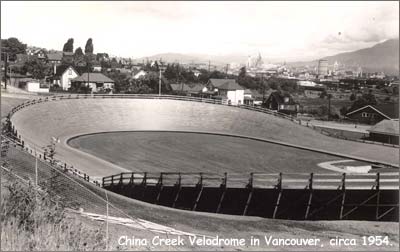 The Vancouver area had been without a cycling track since the old China Creek Velodrome – originally built for the 1954 Commonwealth Games – was torn down in 1980.

From Pavement To Boards
My first sensation upon entering the velodrome was the sound. As I stood on the outside of the track, unable to see inside, I heard – no, actually felt – a low muffled rumbling, getting closer – and closer, closing fast, then right on top of me, flashing by and gone as quickly as it appeared… My brain told me the pack was thundering by, my heart told me to get in there!

So there I was, suited up and eager to learn the art, the finesse, and the speed of riding on a real wood track. For track newbies like me, the BVC runs a Learn To Ride program – about 30 minutes of theory and history of the track, etiquette, and a good explanation of how the lanes are divided and how to use ‘em safely.

The track at the BVC is 200 meters long, with 47 degree banked turns. The track is 6 meters wide, and about 15feet high from the infield to the top of the turns. Looking at the steep banks, you don’t even consider walking up there – too steep. Again my brain wondered how exactly a bike could stick to these slopes, even as my eyes watched the pack thunder by in another blurry lap. Gotta get out there… 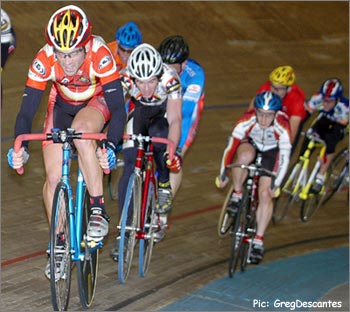 RULES TO REMEMBER
The standout sensations are getting used to pedaling the fixed gear bike, single speed, the turns, and the pure sensation of speeed!

1. Fixed Gear = no free-wheel = no flippy back-pedalling. Your legs control the direction of travel – and there should only be 2 – forward, or on rare occasions – backward.

Going forward: don’t stop pedaling…whatever you do. This sounds pretty basic, but once you’re up to speed there is so much centrifugal force that you couldn’t stop without ripping your legs off. At slower speeds it takes some getting used to – slowing down takes a while – maybe even an extra lap – and until the bike has come to a complete and safe stop, those cranks are always rotating – just waiting to ambush an unsuspecting calf muscle… 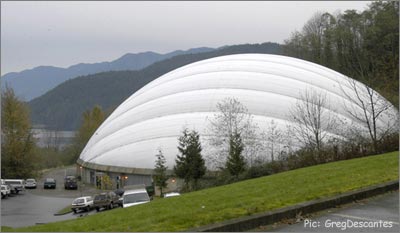 2. Single Speed: No shifters, no problem – one less thing to do, more time for pedalling! This would come in handy when being passed at 50+ kmh by the more experienced riders – holding a line is about all you really want to think about when 3x 200+ pounders thunder by 2 inches above your right shoulder…

3. The Turns The size of the banks is daunting, yet one is drawn to them like a fly into a web… You just know that up there you’ll be flying – you gotta be.

The circumference of the turns is noticeably smaller at the bottom of the track versus the top. This means you can get through the corners in less time, with less speed than higher up. It also means that carrying your speed through the higher sections of the banks requires more pedal revs, more effort, and ultimately more speed.

4. Warp Speed, Mr. Scott!
Speed is your friend on the track. You not only need it to go fast, but to fight gravity. Too slow in the turns and gravity pulls you down – towards the earth’s core, pedal even slower and your wheels slip out – again resulting in the rapid descent down… Either way and you’re cooked – Keep pedaling, because as Gord says, you can pedal your way out of most situations…

The sensation of going fast is heightened by the short 200 meter distance of the track, the relative narrowness – the fast inside is less than 3 feet wide – and the contact proximity of other riders just inches away – you’re passing, being passed, following – . It’s like a video game in that way more action is concentrated into a much smaller field of vision and consciousness…

HIT THE BOARDS
Gord signals that it’s time – so off I go. For a second I was 7 years old – taking my first pedal turns on my first bike – (that Christmas green “Super-Deluxe” from K-Mart). I rolled onto the “cote d’azur – the blue apron around the floor surface inside the actual track. A couple of laps I was venturing onto the boards, first just on the straights, increasing my speed each time… then soon my first turn on a real bank. 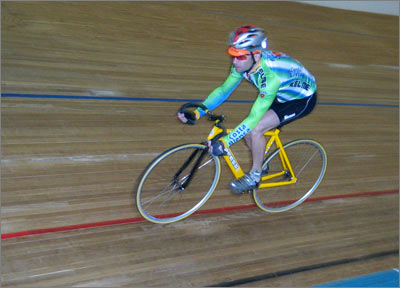 WHOA! I’m riding at 30kmh, the immensity of the banked turn looms up like a giant splinter-filled wave, then I’m into the turn, my instinct is to steer the bike, shift my body – will my tires hold? – look ahead not down, (same things I learned when I was 7). Then out – the track in front of me flattens, I made it – ! There’s still a slope, and I wander back down to the cote d’azur – hold your line – get back on the track…

A few more laps – I’m doin it – riding the track – confidence building… Gord joins me and leads me through a few faster laps. He shows me where to be, how to use the slope to control me speed – head up to slow down, drop down to speed up. Soon I’m ready to try using the slope to launch a fast lap just like the track pros we see in the Olympics…
It’s like diving off the top of a roller coaster or breaking formation from a WWII fighter squadron to chase bogies at 3 o’clock! Yup – it’s fun.

That’s it, I’m hooked. A new way to rekindle my love for cycling, and in the dead of winter! This is so much better than riding the trainer – I’ll be doing this a few more times… And if you get the chance – check out riding on the track – you won’t be disappointed.

For more info on the Burnaby Velodrome Club, and links to a velodrome near you, check out the website: www.burnabyvelodrome.ca

10 Days To The Revolution