MAMIL — here we’re all familiar with the acronym that means “Middle Aged Men in Lycra.” Some of us cringe when we hear it but others are proud to wear the shoes (or shorts) it they fit. Two British riders—one a writer, the other a photographer — revel in their MAMILishness in “Twelve Months in the Saddle,” an account of their bicycling adventures in one calendar year. 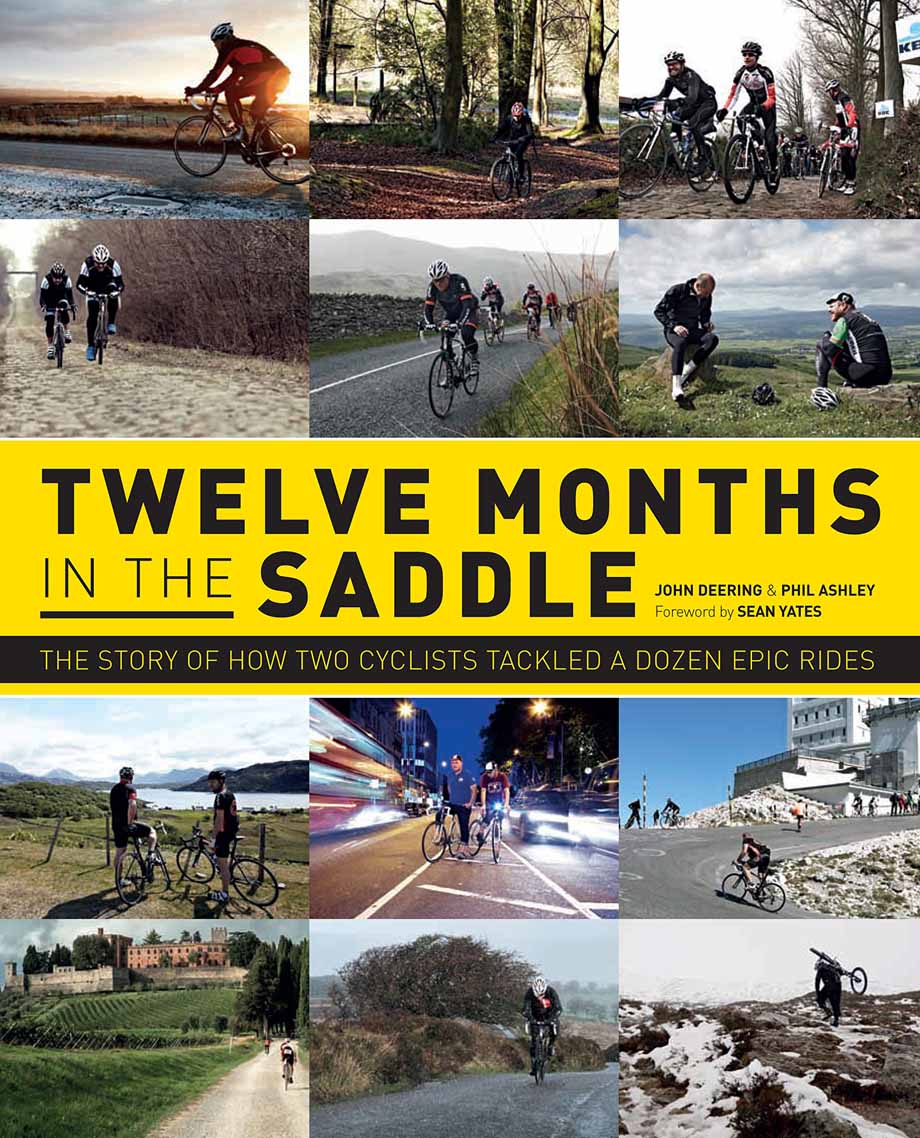 John Deering (the writer) and Phil Ashley (the photographer) are pretty clear in the introduction what the book is about:

Their plan was to do a dozen great bike rides and tell about the experience—not giving detailed route information but describing what it actually felt like to do the ride. While the title of the book is misleading—it was not twelve months in the saddle but rather a weekend or so each month over the course of a year—they pretty much accomplish what they set out to do and those of us who have done the same rides will nod in recognition.

While they are excited about recent British success in the professional ranks, and even persuaded retired pro Sean “the Animal” Yates, the third Briton to wear the Yellow Jersey, to write a foreward, they are not out for great athletic accomplishments but just to have some fun on their bikes. Be forewarned: Yates writes: “I always enjoy riding my bike, even when riding my bike isn’t enjoyable.” This is surely one of the underlying themes of “Twelve Months in the Saddle”.

Britain is not Mallorca in terms of climate, so some of the rides are actually pretty stupid, at least to someone who does not see the need to ride through snowdrifts. In January the duo’s plan is ride across Britain, from the Irish Sea to the North Sea. On the map this does not look very far but does involve crossing the Pennines and although the photos are very atmospheric, they are also very wintry and one can imagine that climbing big hills in sub-freezing weather with ice is not really that much. Although the authors do liven it up with engaging local stories like Mad Friday, when all the locals in Whitehaven who had been drinking in the pubs all day were fighting in the streets by 4:30 pm, but went home when the snow fell.

February still finds them in England, riding the South Downs, with more hills. As throughout the book, there are the verbatim accounts of what MAMILs typically talk about when they are riding (assuming they have enough breath to do so) and in this chapter the subject of leg shaving arises. We learn much, perhaps too much, about the authors but this is all in the British comic literary tradition. 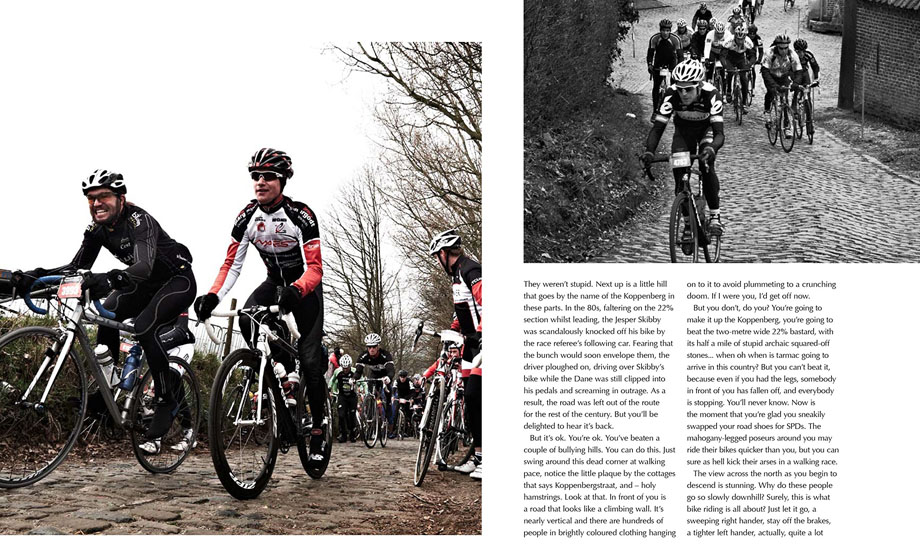 Off to see Johnny Foreigner in March as they get really ambitious, with the sportive version of the Tour of Flanders, followed by another cross-Channel jaunt in April for Paris-Roubaix, in which there are reflections on Sean Yates’ frightening varicose veins as well as the correct method to ride the cobbles. Unlike Flanders, the duo appear to have elected not to ride the Paris-Roubaix sportive but just batter themselves alone.

In May they are again on home turf, riding what appears to be one of the most ridiculous sportive rides ever conceived. The Fred Whitton Challenge is 182 kms and features 3,950 m of climbing, and is so popular that the 2,000 available spots have to be selected by lottery. The scenery, north of England’s famous Lake District, is quite lovely but the toughest bit, the perfectly named Hardknott Pass, rings in at 33% in its toughest bits. As the authors discover sometimes a man’s got to know his limitations.

June seems pretty wretched at the authors sign up for the Dragon Ride in Wales. The largest sportive event in the United Kingdom, by participating in it the authors appear to have missed out on the chance to ride somwhere nice on the Continent as the Dragon Tour, in their description, sounds pretty dreadful, with derelict towns to ride through and busy main roads only.

July features a magnificent 90 mile loop in the Scottish Peaks, a region which seems to be a hidden treasure for cyclists in Britain, while August is very Monty Pythonesque as the duo try Something Completely Different: an all-night ride in central London on fixed gear bikes while wearing tight hipster jeans and riding to every street immortalized on the British version of the Monopoly game board. While highly creative as a concept, it is unlikely to spur much imitation.

The next two months feature true MAMIL destinations: Mont Ventoux in Provence and l’Eroica in Tuscany. L’Eroica is always good for great photos but the authors seem astonished at just how difficult the ride really is. As carbon enthusiasts (a typical characteristic of MAMILs who like to buy bikes better than what pros use to earn their livelihood) they also lack respect for their borrowed vintage equipment—a Pogliaghi and a Chesini—as in the acknowledgements they thank Bob Johnson “for lending us a load of his old junk.” 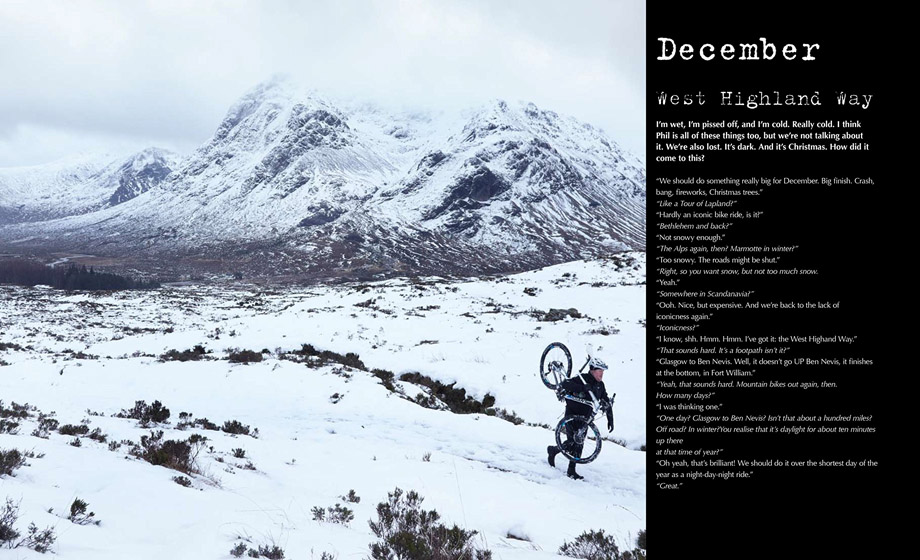 The year heads to its conclusion with a visit to the bleak but dramatic hills of Exmoor in November and finishes with another terrible ride in snow, this time in Scotland, where the scenery seems to summon up more of the Glencoe Massacre than the Scottish Enlightenment. Merry Christmas!

There is lots of entertainment to be found in this book, although some references to British footballers and other celebrities will pass by non-Brits (although kudos on the “Father Ted” cow reference!). The photographs are very good and the writing tongue-in-cheek. Some readers will be inspired to try some of the rides in the book or plan big weekends elsewhere. But best of all even if we don’t know the John and Phil who did this book, we know more than a few Johns and Phils when we go cycling. MAMILs all! 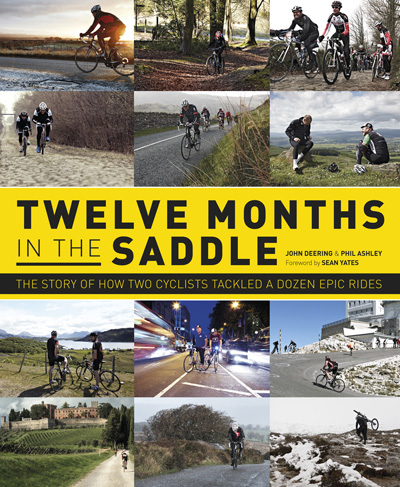 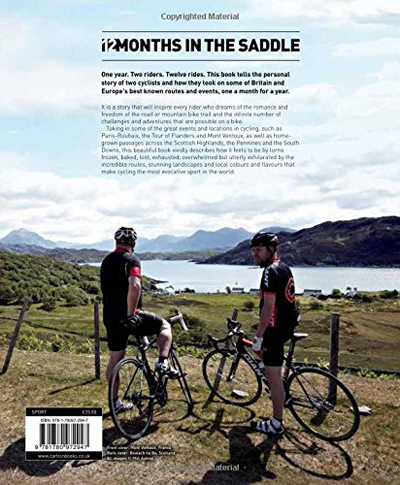 # Buy “Twelve Months in the Saddle” by John Deering and Phil Ashley from AMAZON.COM. #

When not remembering just how hard the 135 km route of l’Eroica was, Leslie Reissner may be found at www.tindonkey.com drinking Chianti Classico to forget.