A day with Garmin-Barracuda was followed by two days with the BMC team. Both teams have their ways of doing things, but both are professionals. The most notable thing I noticed was the how much more interest there was in the BMC team compared to last year. The difference a Tour win can make and signing two of the biggest names from the Classics.

I’m glad to say that the first day of the BMC team’s two press days didn’t kick off until the afternoon, which gave me time to post EuroTrash Thursday and write up the previous day’s Garmin-Barracuda press day. Garmin were down the road in Calpe, which is the favourite destination for many Pro teams. BMC were staying, for the second year, a little further north in the rather plush Marriott La Sella Golf. The hotel is situated between the well-known holiday towns of Denia and Javea next to the village of Jesъs Pobre (Poor Jesus). Nice little village, but still not sure about the name.

Nothing much going, yet

When I got there the riders were out training, and nothing much was going on at the team trucks. It was good to see the BMC team scooter. Not sure if it was used for pacing work or to go to the shops, but still it was nicely decaled up in team livery. Georges Lьchinger, one of the three press officers for the team, was keeping an eye on things and was very pleased with the good weather after the wash-out of last year. 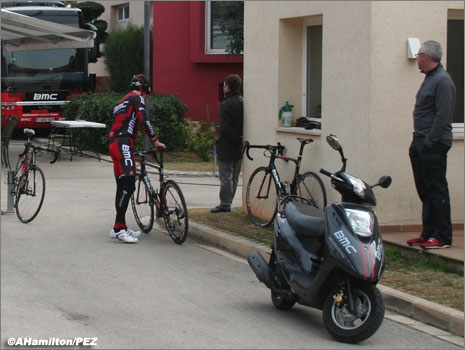 At the busses, the mechanics only had one bit of business: a rider who wanted position adjustments. The other riders would be back soon, so they were quite happy with the lull before the storm. 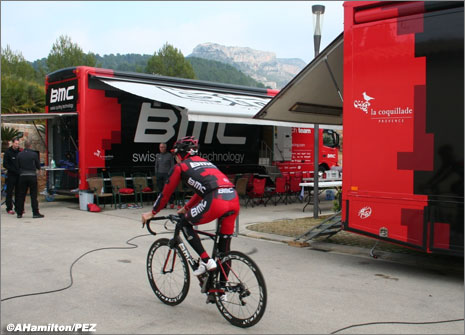 Nothing much to see

Here is some video of the team training:

Back in the hotel many of the team management staff were catching up on paper work and arranging the many things a pro team has to do. Sean Weide was waiting in the hotel reception to meet and greet, and give us the run-down on the two days of presentations and interviews…and of course the food. 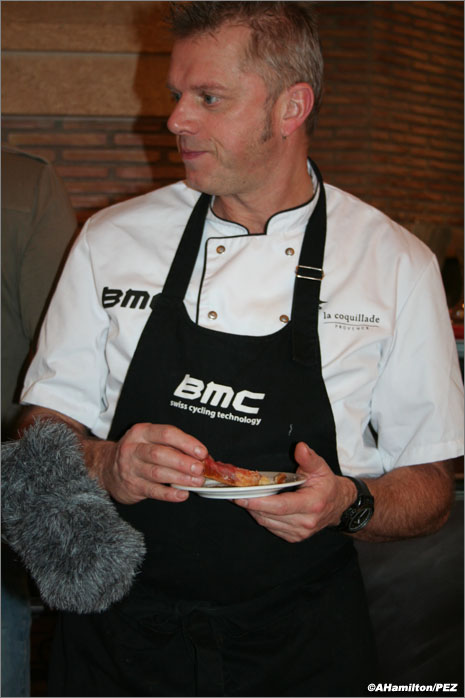 Talking of food, the BMC chef was there in the hotel preparing all the food for the team and for the invited guests. Same as last year, I had to miss out on the special dinner on Thursday evening, but maybe next year! 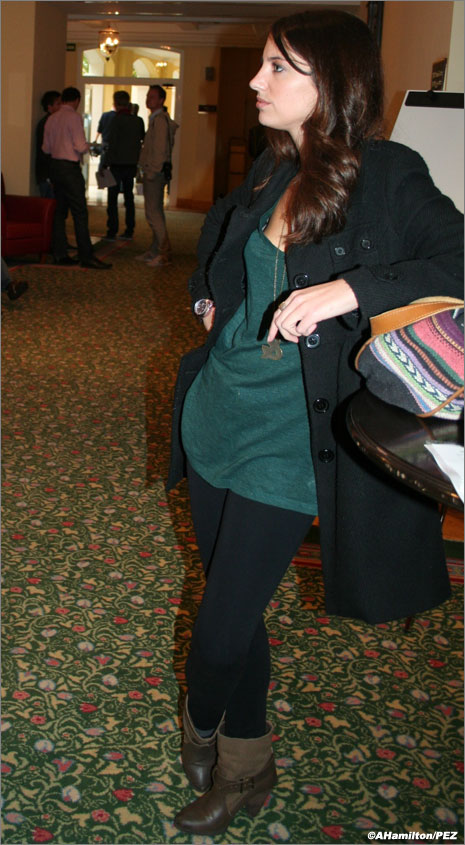 One of the better looking journo’s

A great bonus to the two days was meeting up with Laura Meseguer of the Spanish Pedalier Pro magazine. Great company and kind on the eye at the same time. Also there is an advantage to her sitting next to you during interviews: for some reason the riders are usually looking (roughly) in your direction (more of this later). 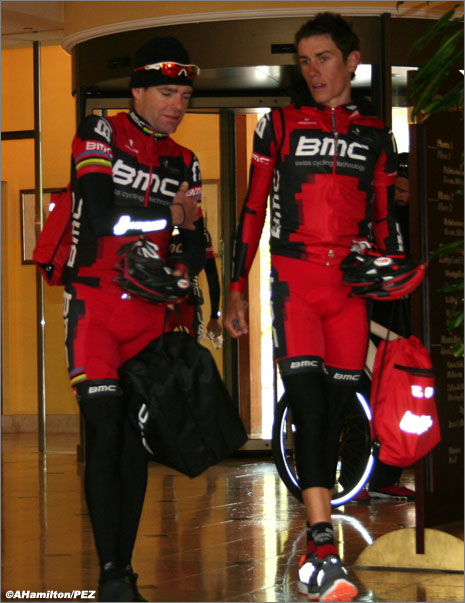 As we were waiting for the presentation on the BMC bikes, the riders started to either wander down from their rooms or come in from training. Cadel Evans and Tim Roe were in deep conversation in the reception area. The younger Australian had some problems last year, but he can’t have a better tutor than Evans. 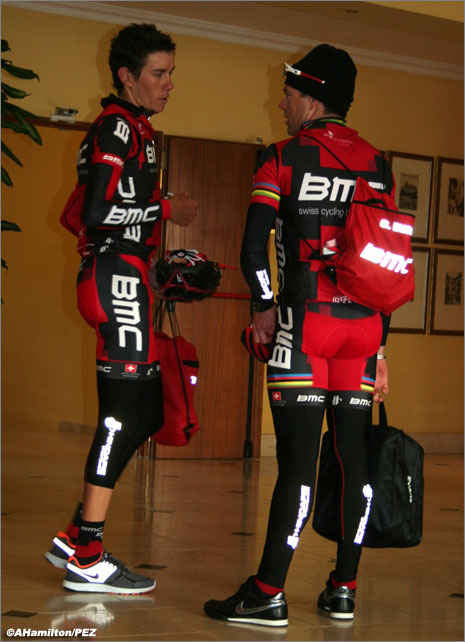 Adam Blythe has joined the team from Omega Pharma-Lotto, I interviewed him way back in March 2009 when he was a young lad joining the Davos development team. Since then things have changed quite a bit and he bought me and Laura coffee, which was nice. Adam was one of the riders I had requested to interview, so more later. 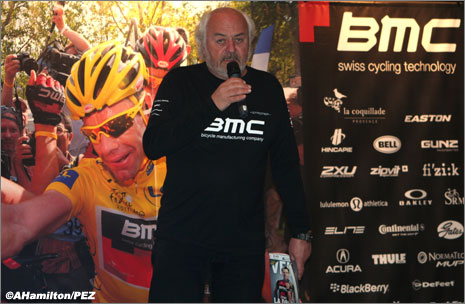 It was time for the first presentation. The team presentation was scheduled for Friday morning, today was the turn of BMC the bike company and the aims of the team. First up was the “chef sommelier,” the boss of the company and the team, Andy Rihs. He speaks well of his love of the bike and the sport. I particularly liked his comment: “ride your bike and drink good red wine,” a great bit of advice for anyone. He introduced the road and time trial bikes, plus the new range of city bikes. 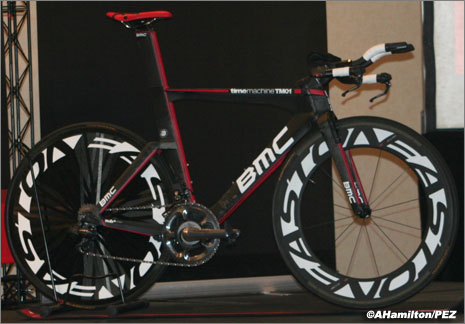 He also sorted out one confusion; BMC does not stand for “Bring More Cash!” After the bikes we heard from the team’s General Manager; Jim Ochowicz, who laid out the plans for the team and the BMC “family”, but there was more of this after the team riders were presented with more in-depth questions. 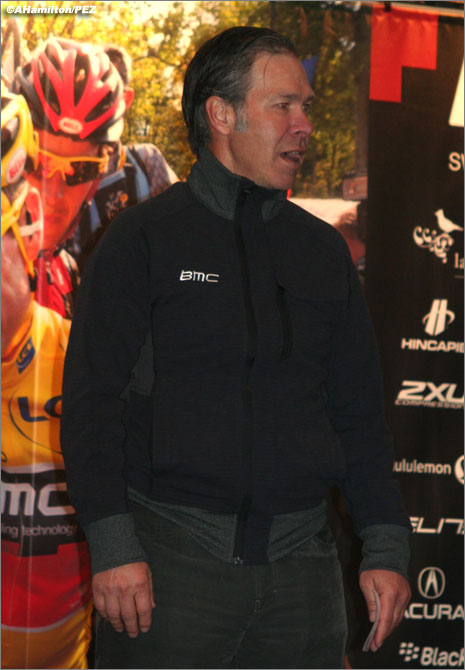 Soon we would have the chance to talk to some of the top cyclists in the pro peloton face to face. The press staff of the team explained how this was going to happen, not easy when you have written press and TV, plus photographers. Georges, Blandine and Sean would be accompanying each of the three main riders; Cadel Evans, Philippe Gilbert and Thor Hushovd for 20 minute interviews. Then the US, UK and Australian riders, the Belgian group, the Swiss & Germans and then the Italians on the team. 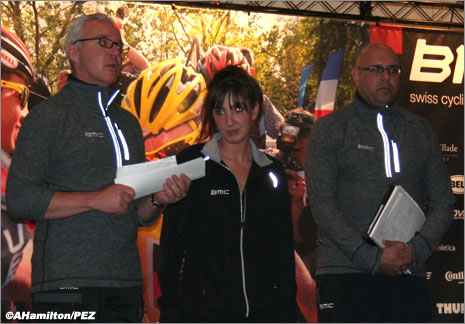 We had a short wait for the riders, but it wasn’t difficult to know when they were about to arrive: TV cameras, bright lights and quite a hubbub approached down the hall with Evans, Gilbert and Hushovd in the mкlйe. 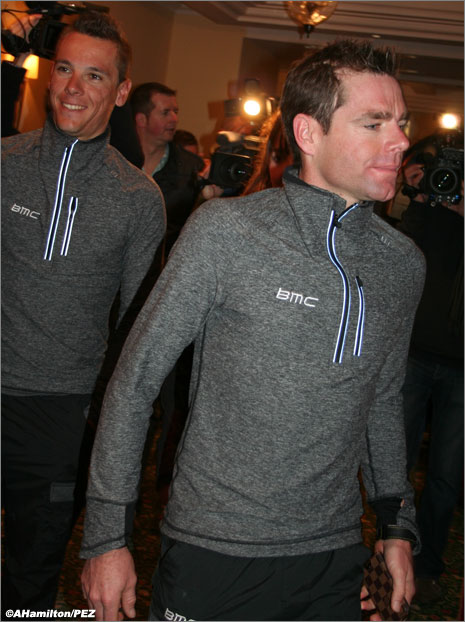 The scuffle before the interviews!

First up for us was Thor Hushovd, many of the other journalists where Scandinavian and I am glad it was all in English. Thor at first appears to be quite intimidating, but he is a funny guy and likes to say how it is, in a serious sort of way. 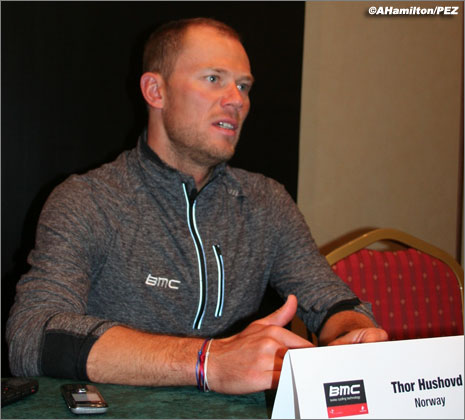 Philippe Gilbert was the most dominant rider in the Classics last year. I had met him at La Vuelta previously, but never had the chance to talk. I had no idea what he was like. Let me say, for a top professional sportsman he is very well grounded, also likes a laugh and doesn’t mind a beer (and wine). Can’t fault him on his choice of favourite Belgian beer. Most surprisingly for a man in his position, he didn’t know his weight! He does know what he wants when he is racing. During the conversation Philippe seemed to be looking in my direction on many occasions…or was it just to my left? Laura was sitting at that side. 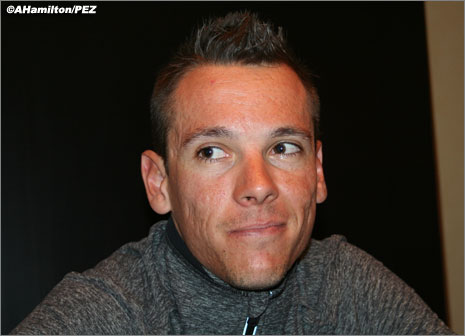 Who is sitting to my left?

Last of the individual interviews was the last Tour de France winner; Cadel Evans. Last year, I was surprised at how nice and funny Cadel is. After I had heard the comments of other journalists, and I’ve not changed my mind. He is courteous and polite, answers all the questions and tries to be light hearted and amusing. The questions were either about the Tour de France or his recent adoption of an abandoned baby boy from Africa. Anyone who has the heart to rescue a child who had been left at the side of the road must be a special person. 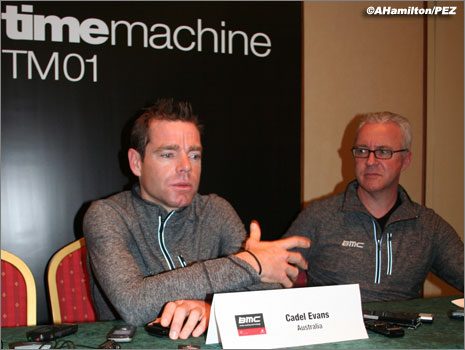 To finish off; the group of English speaking riders took their questions, George Hincapie on his future and long past, and as all the others are young, it was mostly about their futures. I did find out from Adam Blythe that Taylor Phinney’s nickname is now “Hollywood,” and it came from his roommate George Hincapie. 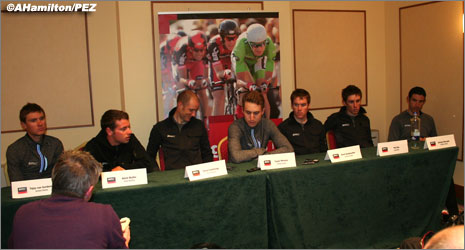 After all that, I had a one to one with Adam Blythe. Seems life in Monaco suits him, if he ever gets the chance to actually be there: he has been at training camps since before Christmas and then the Tour Down Under before coming back for this training camp.

Time for me to go home. Missing that dinner and wine again, but work has to be done and there are a lot of interviews to be written up. Stay with PEZ for the interviews with the above coming soon. Friday was the team presentation followed by the training ride, there would be breakfast first though, pity I had to get up at 6:30!

Breathplay: Turn Your Breathing Upside Down

Two Days With The BMC Team: The Final Day!