Tis the season for regular fans to get a little closer to the stars of cycling, as the racing year is done and the riders turn out to support various charitable causes. Jeff Wells joined Tyler Hamilton to do just that last Friday in Fort Worth Texas over breakfast, chatting and riding.

Do you have what it takes to ride with Tyler Hamilton?
What a question for a first year cycling addict to answer and one that was posed to me on the very day Mr. Hamilton won Olympic Gold in Athens early this summer.

I was busy at work when my phone rings and my wife asks me that wonderful, unbelievable dreaded question. After what seemed like a 20 minute silence on my end she asked me an even better question:

“Do you even know who Tyler Hamilton is?” 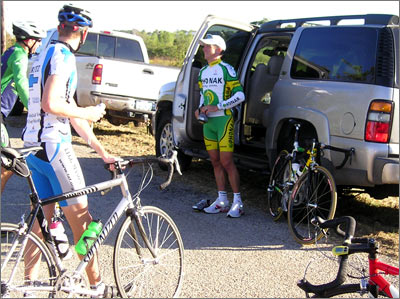 Tyler arrives to “Cycle For Science”.

Well, as a guy with a wonderful marriage of 10 years and 3 sons under the age of six you all can imagine what my response was. Count me in! I was going riding with Tyler Hamilton, TDF star and Olympic Champion, Tyler Hamilton.

Tyler was the main attraction of this year’s fundraiser entitled “Cycling for Science” at the Fort Worth (Texas) Museum of Science and History. The event, organized by the museum and co-sponsored by several prominent Fort Worth area businesses, was simply an opportunity for 40 riders to ride a brisk and scenic 30 mile ride course Tyler after which we were all treated to a sneak preview of the upcoming movie “Brain Power” in the Omni Theatre located at the museum. 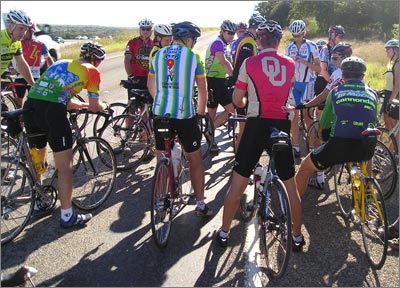 Not your typical Saturday ride – how often do you wait for Tyler Hamilton to join you?

The event was open to 40 riders who’d donated a minimum $500 to join Tyler on the ride. Ten of us donated $1,000.00 and got the chance to have breakfast with Tyler and get a few more items in their race “goody” bag.

The long weekend started on Wednesday evening at the Central Illinois Regional Airport. I left my home in Bloomington, Illinois on Wednesday and flew to Fort Worth, checked into my hotel and laid in my bed thinking about my weekend away from reality!!!

Thursday brought an even more exciting day and time. I went to Fort Worth Cycle (www.fwcycling.com) to pick up my bike…shameless plug but hey, they were totally at my service and for those of us who have ever dealt with a customer service-less shop you gotta feel my love for these guys!! They were awesome, not only did they help sponsor the ride but many thanks go to Jason for giving my bike a total overhaul… amazing what a few thousand miles will do to your bike! Thanks Jason! 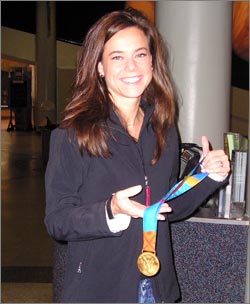 Tyler’s wife Haven was in charge of his Gold Medal.

Finally the big day had arrived. I was at the Forth Worth Museum of Science right at 7:30 AM…my first question to the gal ushering the 10 lucky guests into the museum was, “Is he here yet?” Luckily I wasn’t late and hadn’t missed anything.

For what seemed like 1 hour (it was actually about 1 minute) I introduced myself to several of the local riders when all of a sudden…HE walked in.

After about 20 minutes of small talk about training, the Tour, Athens and his overall schedule we had a little to eat. Fruit, bagels, scrambled eggs, sausage, juices and coffee was out buffet style.

I was trying to notice if the other 10 guys were eating as lightly as I was, my stomach was still in knots and I hadn’t gotten over the fact I was sitting around chatting with a world reknowned athlete and Olympic Gold Medalist…with his medal. Good stuff!! Needless to say I later found out we are all kind of star struck. 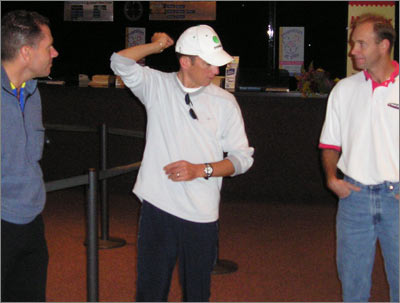 Tyler is a regular guy – he flicks his bottle caps just like the rest of us.

After breakfast, a short autograph session and pictures we loaded up the goodies and our bikes for the ride where we would meet the other 30 riders. We arrived at a small church outside of Fort Worth and after some pleasantries from the sponsors we took off.

On To The Ride!
The plan was to have everyone ride alongside Tyler for a short period, have a bit of small talk, smile for the camera and peel off for the next rider. You can imagine how that went and after about 11 miles of riding close to the middle of the pack I decided that I wasn’t going to get my turn unless I made a bold move.

So, I went to the back of the peloton, waited for a good size hill, and made my move. I went up past the first lead car, swerved in front of it and immediately to the far right hand side of the road. From there I let up and presto I found myself next to Tyler.

Now, keep in mind I had a nice conversation with him (and Haven) back at the museum, plus we are mile 14 of this ride. You’d think the stomach would ease…wrong. I looked over at him, he looked at me as if to say, “What was that??? And I completely froze.

My reply? I said, “You don’t wear gloves when you ride?” What a profound question!! By the way, he replied, “Not all the time, but it depends on the ride.” Nice…

Anyway, I gathered myself and asked him about the picture that was given to us at the museum (an awesome shot of him riding the cobbles at this years TDF), the impending movie coming out called Brain Power, in which they study how an athlete’s brain works during unbelievable circumstances (i.e. riding 19 stages of the TDF with a broken collar bone).

I then decided that I was up with him long enough and asked the photog to snap the picture of us together…Tyler reached his hand over, placed it on my back and said, “smile.” 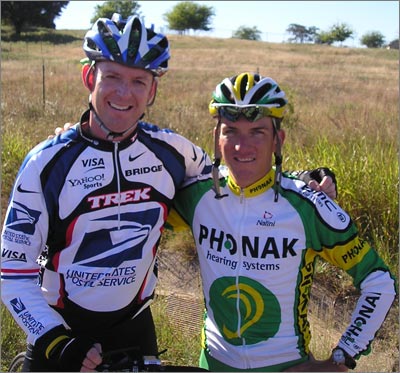 Jeff and Tyler – suitable for framing, or at least putting on the fridge…

I wish I could say the route was as exciting as the initial meeting at the museum, and the picture moment but, it really was just an average 30 miler on a few Texas access roads. Make no mistake about it, we were all having so much fun it did not matter…we were riding on cloud 9!!

The ride came to an end back at the church where everyone mobbed Tyler and Haven again. Taking pictures, signing everything under the sun, whipping out the Gold Medal, and more chatting.

All too soon the Hamilton’s thanked everyone for coming and waved goodbye. We all cheered, and as he was leaving he turned and said, “Remember to cheer for the Red Sox tonight!!!” Another loud cheer went up as he climbed into his SUV and sped off.

We are all going to have our opinions about the situation regarding Tyler and other riders for that matter. For me, he isn’t guilty until the last appeal is heard. He is a human being who treated us all with respect and dignity – he is a great guy!!