2009 saw the Giro d’Italia celebrate 100 years of history, and La Gazzetta dello Sport- the iconic newspaper responsible for creating the Giro, has organized a series of lectures promoting the history of the race. Over the course of 10 decades, newspaper journalists and more recently, television/radio/internet personnel have all shared their views on Italy’s most revered sporting event. About 2 dozen journalists and students-and a few random cycling fans- showed up at New York University’s Casa Italiana Zerilli-Marimo to listen to Italian professor Aldo Grasso share his view on Italy, bicycle racing, and the art of storytelling.

June 10, 1949. Mario Ferretti’s words crackled over the radio, barely audible behind an annoying hiss that very nearly cancelled out a piece of cycling history- “a man alone is leading… his jersey is white and baby blue. …..his name is Fausto Coppi.” Fausto Coppi went on to win stage 17 by nearly 12 minutes and with it the 32nd Giro d’Italia. The stage was from Cuneo to Pinerolo over 254 kilometers and included the Colle della Maddalena, Colle del Montginevro, Col de Vars, Col d’Izoard and Sestriere. According to Aldo Grasso, it was the birth of the modern day cycling legend. 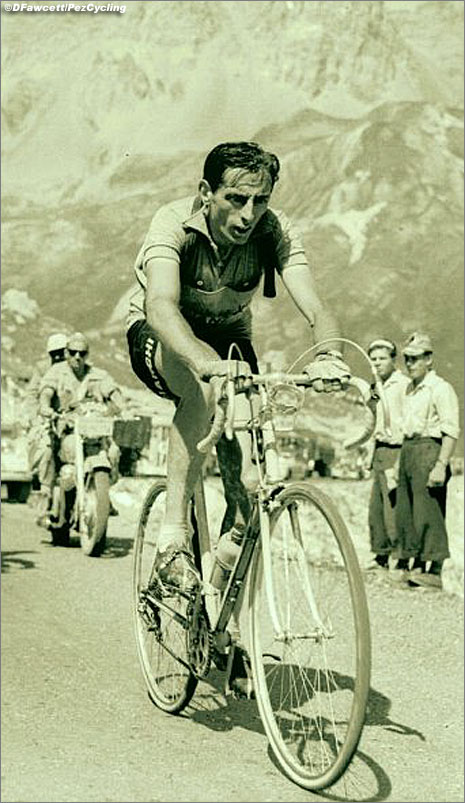 Fausto Coppi at his finest.

Aldo Grasso is a Professor of History of Radio and Television at the Catholic University of Milan and a columnist and television critic for the Italian newspaper Il Corriere Della Sera. His lecture “Girogirontondo: 100 years of the Giro d’Italia. A History of Italy Through Bicycle Heroes and Storytellers” at New York Univerty’s Casa Italiana Zerilli-Marimo was a far too brief look at the important role the Giro d’Italia plays in Italian culture since its inception in 1909. 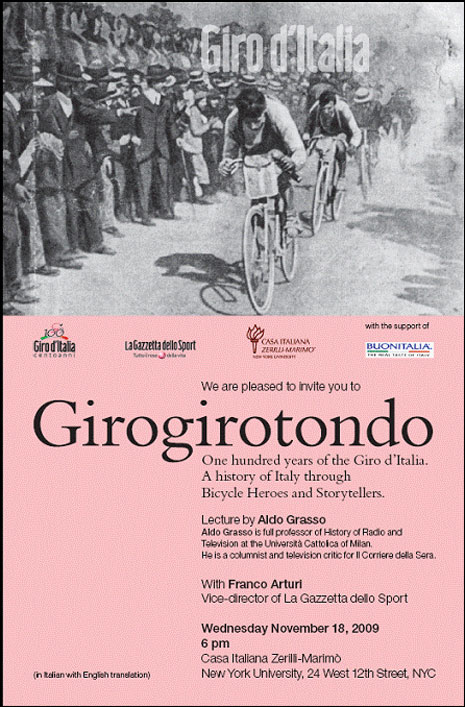 Italy’s Cycling Heroes: Rising From The Ashes
Mr. Grasso’s list of heroes did not provide any surprises, but the connection of a significant few as an integral piece of cultural identification that coincided with the most significant events of Italian history of the 20th century shows that the Giro is about much more than fashionable pink clothing and attractive podium girls. 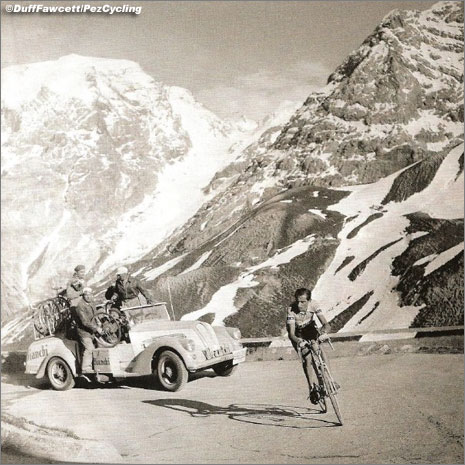 Fausto Coppi ascends the Stelvio in 1953, with every meter climbed, his legend grew.

As Coppi’s heroics were so poetically transmitted by Mr. Ferretti, the descriptive prose invited the listener and reader to create their own view of bicycle racing and its heroes. It compares with the literary works of Homer, Mr Grasso announced, and the journey and the conquest, these were words that resonated like a symphony or reminded the devout of a biblical verse.

In post World War I Italy, many heroes and legends were either warriors or biblical figures. Alfredo Binda was the first Italian the media catapulted to heroism, providing honor and glory to cycling in a post war society that was starved for cultural identity. 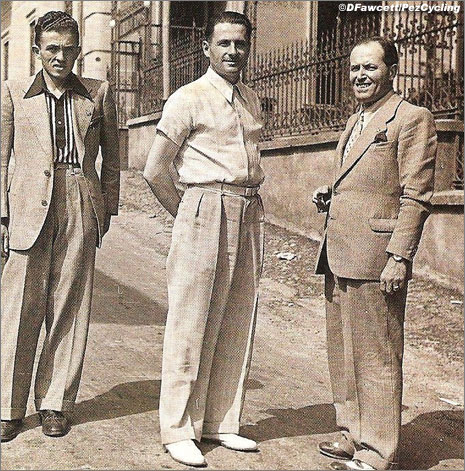 Binda’s exploits didn’t disappoint either, as he won the Giro 5 times between 1925 and 1933-including 41 stages-and was crowned the first ever world champion, a title he would capture two more times. The popularity of the Giro was fueled by the growth of the media, and at the heart of this growth were the journalists that populated the imaginations of the readers, and set the stage for each year’s race to be the next round in heroic conquests.

Italy’s Cycling Heroes: The New World
The modernization of post World War II Italy moved slowly. In 1946, there were 3,000,000 bikes in Italy, and 147,000 automobiles. In 1947, there were 3.5 million bikes, and only 148,000 automobiles. Sport was slowly returning as a way to see new modern heroes, and the Giro gave the country a visual story that connected people and reconnected a culture ravaged by war.

Fausto Coppi represented a new national spirit of Italy, as the country positioned itself towards a more complex and industrialized nation. The well-known and well-documented battle between Coppi and Gino Bartali was as much about Italian life as it was about victories, the old world farmer vs. the new world modernist. Traditional country vs. complex industrial nation. Post World War II euphoria was taking hold, and this interested the media. 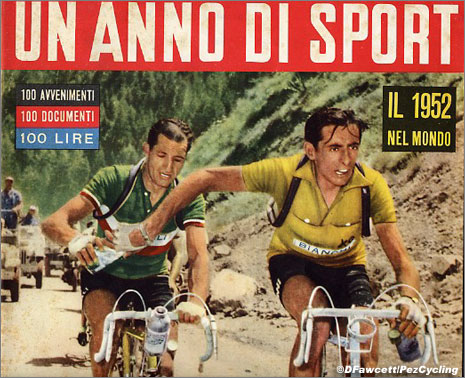 Coppi and Bartali formed one of the greatest rivalries in cycling history.

Writing in this period flourished with the adjectives journalists used to describe the exploits of these newborn heroes, and populate the imagination with the exploits of the sport and weave it into everyday life. The first half of the 20th century ended with Mario Ferretti placing a country on the shoulders of Coppi. The late journalist Dino Buzzati so eloquently documented this cultural transition in what ultimately was published in 1998 as Coppi vs. Bartali at the 1949 Giro d’Italia. When the legend becomes fact, Mr. Grasso stated, print the legend.

Italy’s Cycling Heroes: Turn On Your Television
It took 20 more years, but by 1969, the introduction of television was the primary media to transcribe the day to day movement of the race. This brought the heroes into the living room and animated the rivalry of Felice Gimondi and Eddy Merckx. 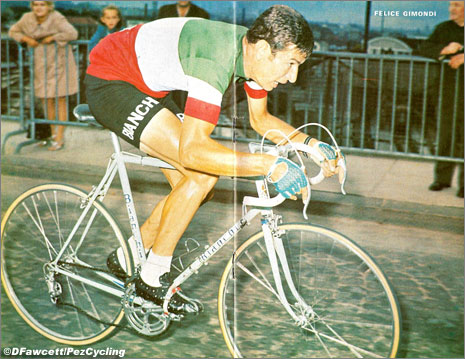 The transmission of images of Merckx crying on screen as he defended himself against a positive doping test was the pivotal moment that removed the hero from ones imagination and placed him next to you in the living room. While this continued to place heroes in everyday life, it began to diminish the imaginative and creative forces that one uses, and places the promotion and development of the race squarely on the set schedule of TV. 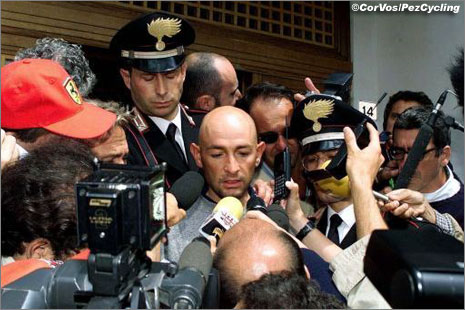 Pantani ushered out of the Giro at the zenith of his powers in 1999.

Following another 30 years, and the first tragic hero of modern media was escorted out of a hotel in Madonna di Campiglio while leading the Giro. Marco Pantani was the first made for TV hero, both built up by TV media, and ultimately destroyed by it. The tragic hero obtains his legendary status only after his death Mr. Grasso pointed out emphatically. 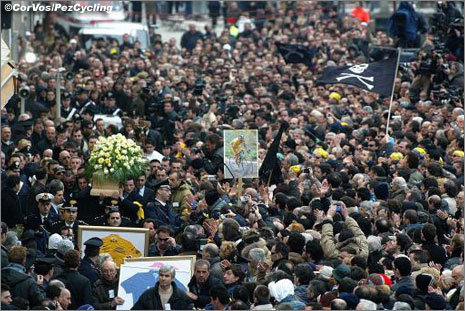 It wasn’t but a few years later that the great Pantani was gone.

The 21st Century: The Need For Authority
Where the journalist succeeded with words to paint his hero, the TV show fails to inspire. One’s imagination, and memory recall, is no longer active. The aspiration is then not to create a legend, but to become a television hero. There is no longer the need for the descriptors and adjectives to describe the exploits of what we have just seen on television.

Television has killed the principle of authority, those voices that created the legends. There is no longer an authority of the sport, no voice, nothing to grasp, no imagination. It is scripted to fit into a time slot, and its extraordinary visual images transcribe something lifeless and numbing.

The basic principle of the bicycle has changed very little. The invention continues to provide a significant connection to people and to those whose exploits they witness. The Italians believe sport is deeply cultural, Mr. Grasso concluded. It is an integral part of western culture, and there is a sense of nobility about the aggressive instincts, all of which are metaphors for life. “If this is not culture, then tell me what is?”

Peter Easton first saw the Giro in 1994 and has been hooked ever since. His travel company Velo Classic Tours has two Giro trips for 2010, including Legends of Tuscany: L’Eroica, Il Giro d’Italia, and Gino Bartali. Visit Velo Classic for more.
Like PEZ? Why not subscribe to our weekly newsletter to receive updates and reminders on what's cool in road cycling?