Inside The US Postal Team Presentation

– Reported By Matt Wood –
Tuesday afternoon, PCN correspondent Matt Wood attended the official presentation for the 2003 US Postal Service Team, following their training camp in Solvang California. In the room were journalists from all over the world, including France and Germany. 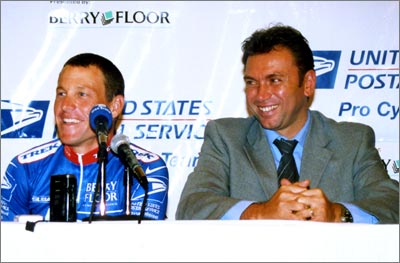 The event itself was pretty relaxed, and the team appeared comfortable and with a growing sense of cohesion that often goes with the start of a new season and the arrival of several new riders. The team members were introduced individually and then asked questions by Dan Osipow. 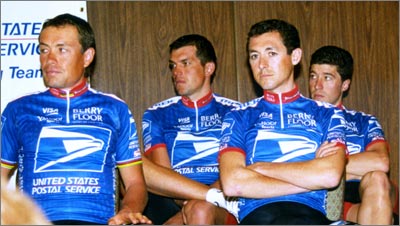 This was followed by a half hour question period with Lance, who answered each reporter directly, respectfully looking them in the eyes. Although individual time with Lance was limited, Matt “got a sense that he’s a great guy, who seems really well grounded for all he’s done.” here’s what Lance had to say:

1) What accounts for your consistency in performance over the last number of years?
LA – The training program I follow insures that I have less bad days. The goal is to minimize bad days on the Tour. There must have been twenty guys in the Tour de France who could have won if they had minimized just one bad day.

2) Does the goal of winning five Tours put enormous pressure on you?
LA – My goal is just to win the 2003 Tour de France. I only look at one year at a time. If I were to think about putting myself in such elite company as a Merckxx I would be overwhelmed.

3) Lance, your team has been known to have excellent preparation. You know the key stages, when to attack and when to lead the Peloton. The directors of the tour each year have tried to change the tour dynamics. What do you think about this year’s tour route?
LA – This year the time trials are shorter and there are less up hill finishes. The tour directors want to put on a competitive product that will be watched by fans throughout the world. If the directors had twelve days of just ridding around the Champs Elysees, I would not like that… 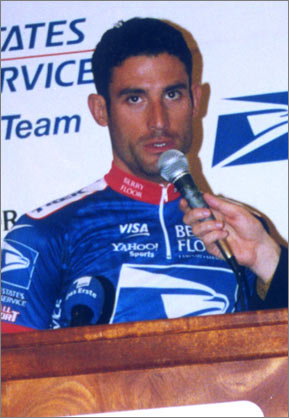 Question for Johan Bruyneel:
1) Can you describe for us the selection process of the team this year?
JB – The selection of the team gets more and more difficult year by year. But we also get used to the process. The goal is to see who is performing well, and what kind of experience they can bring to our specific needs. But it does become more and more difficult when 4 to 5 will have to stay behind. The goal for the tour is to have everyone finish. In 1999 we had 6 to 7 team members finish and each year that has increased to 9, 12, 13 and last year 14. The month of June will be the time when we make our decision as to who will be going to the tour.

Stay tuned to PezCycling News for interviews with Robby Ventura and Matt White.