Top Belgians talk TT: Wout van Aert and Remco Evenepoel have been in discussion about their chances in the Olympic time trial in Tokyo next year. They will be riding against each other and together for the Belgian national team and the two top men agree on one thing: “Ganna is the man to beat”. 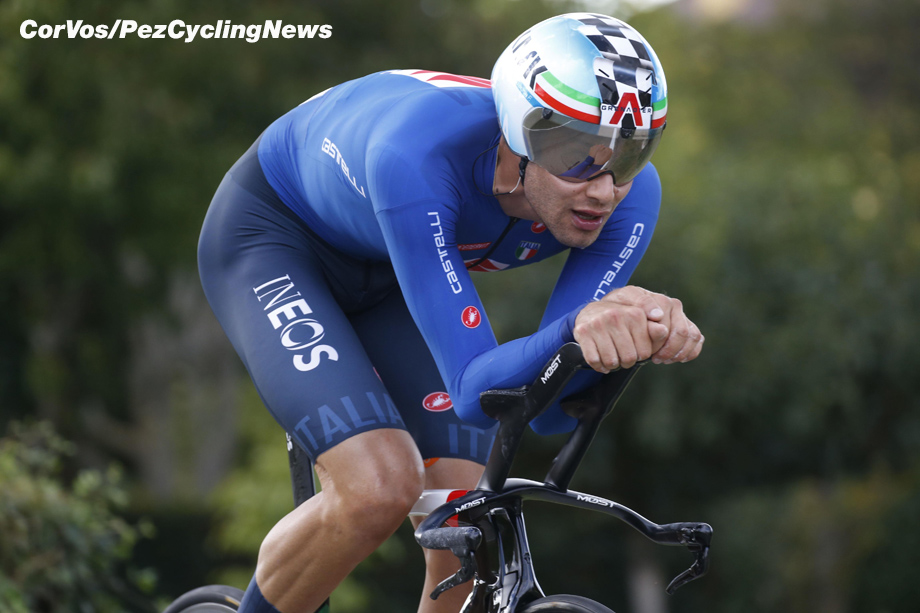 Filippo Ganna – The man to beat

Remco Evenepoel is already certain of his place in the Belgian team for the Olympic time trial, although officially, Wout van Aert has not been guaranteed his place yet. Both riders are favourites for time trial gold in Tokyo next year, but both know who the ‘main man’ is going to be: Filippo Ganna. “He is the man to beat.” 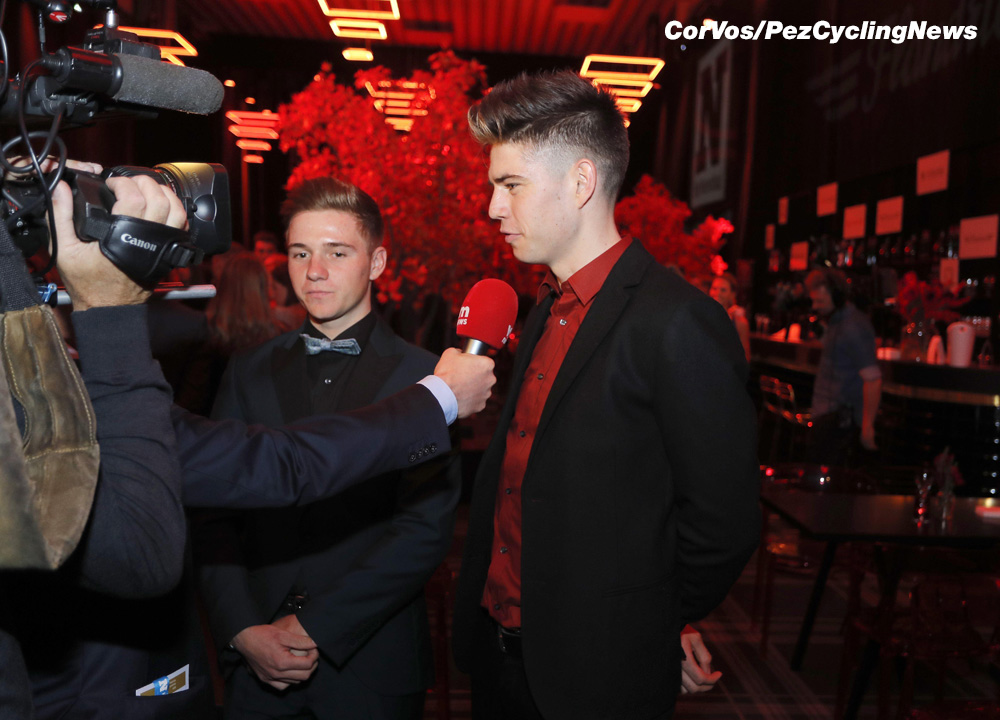 Evenepoel and Van Aert – Flandriens of the Year

Het Nieuwsblad spoke with Van Aert and Evenepoel in the run-up to the Flandrien of the Year, where both riders are on the nomination list. The 26-year-old Van Aert is the top favourite after victories in Strade Bianche, Milan-San Remo and stages in the Tour de France. Evenepoel is Van Aert’s main competitor for the Flandrien prize, just like last year, and it won’t be the for last time. If all goes well for them both next year, they will compete for Olympic time trial gold in Tokyo, both for Belgium. 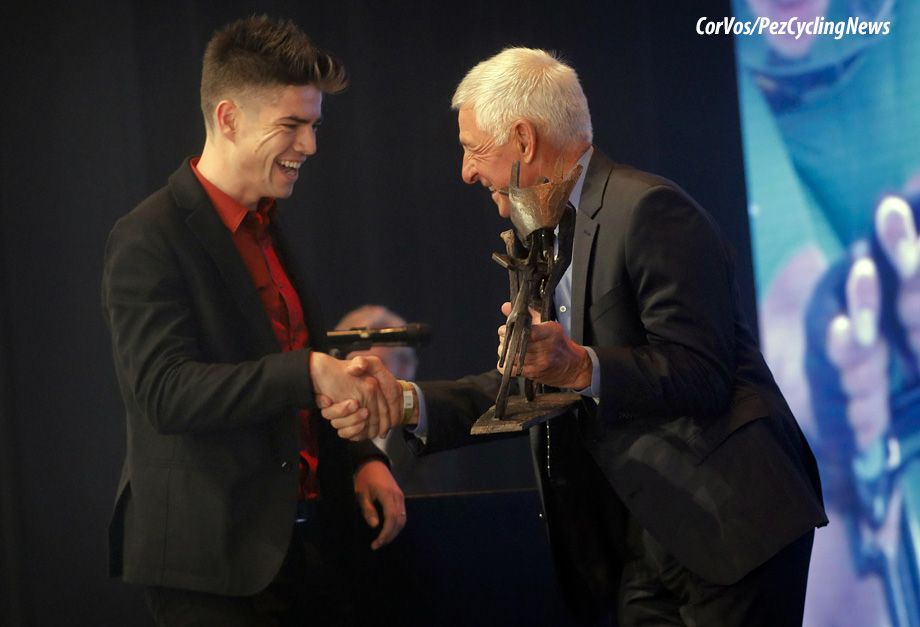 Olympic time trial
The riders of Deceuninck – Quick-Step and Jumbo-Visma see it differently: “We have to perform as a country. Push each other forward in every possible way. Two medals in the time trial, wouldn’t everyone be happy with that?” Said Evenepoel. 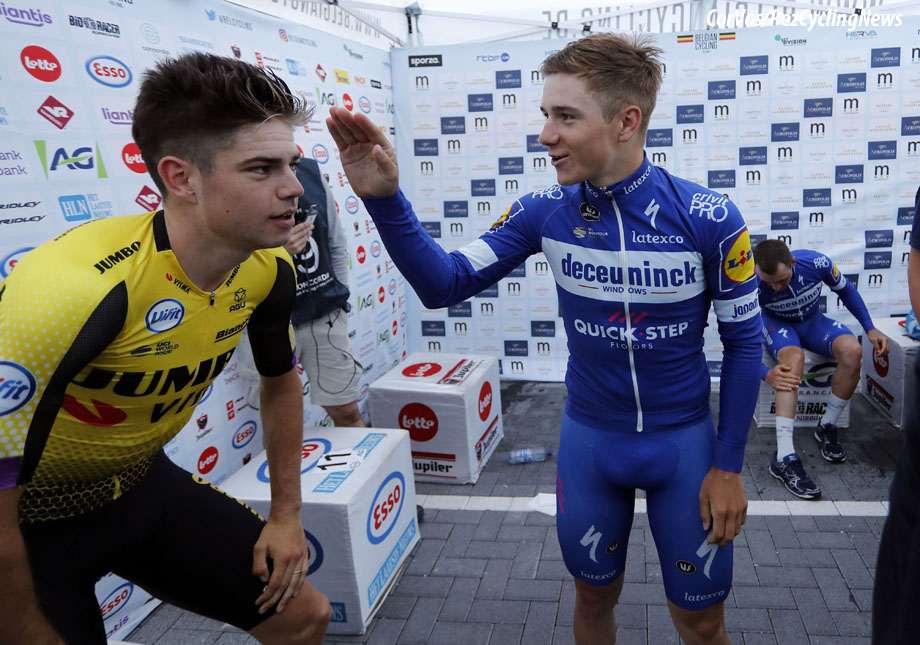 Podium places for the two Belgians in Tokyo

Van Aert: “I will join Remco. Cycling has really become a team sport. In the time trial that is a slightly different story. We can support each other in the preparation, but after the starting shot it is everyone for himself. You don’t have to hold back for someone else at all.” 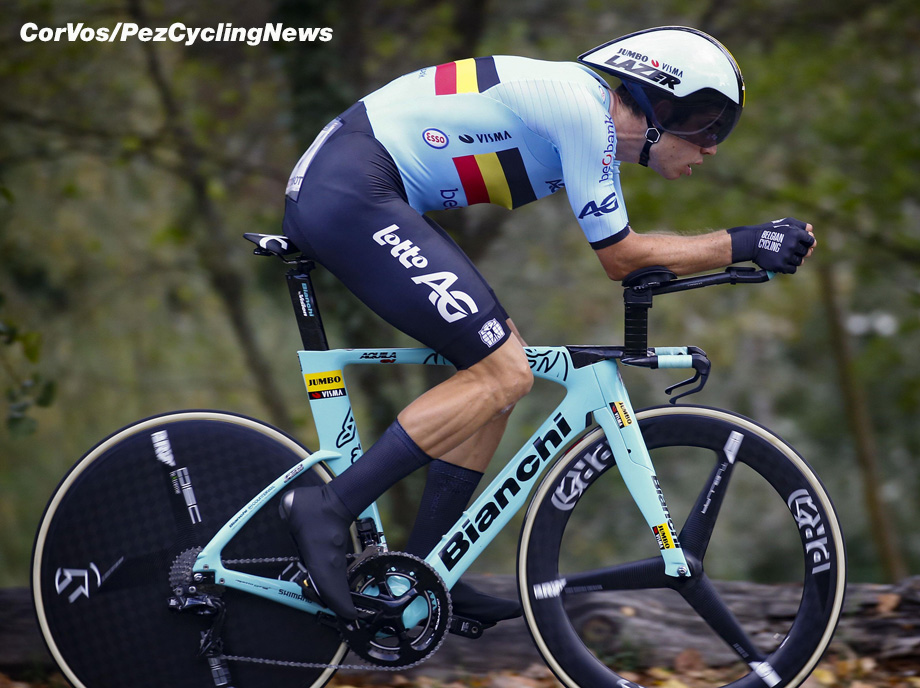 Both riders confirm that World champion, Ganna, is top favourite in Tokyo. “We will hardly have to focus on anyone else,” said Evenepoel. “I talked about the course in Argentina with Maciej Bodnar, who had already done the test event. He says it’s less tough than you’d think based on the profile. But every metre uphill is in favour of the lighter rider. Ganna is the man to beat anyway.” 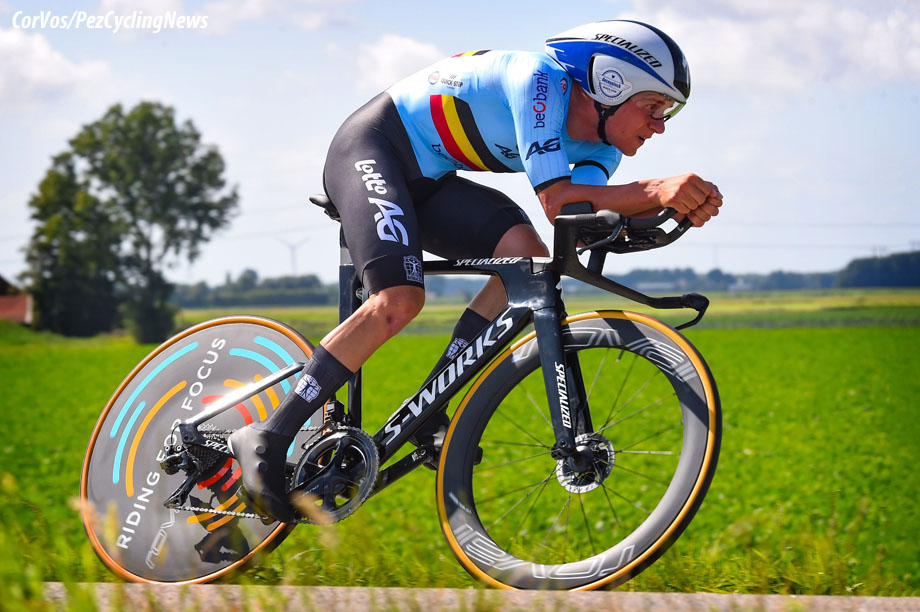 Evenepoel on his way to the Euro TT crown

“But whether a difficult course really plays to his disadvantage? In the Giro, Ganna won the long time trial just as well. There you also had a steep climb along the way and he climbed faster than the general classification riders. You can’t say he doesn’t stand a chance when it’s difficult. If you see what steps he has taken, he will always remain the biggest competitor,” Van Aert added about his competitor who is six years younger. 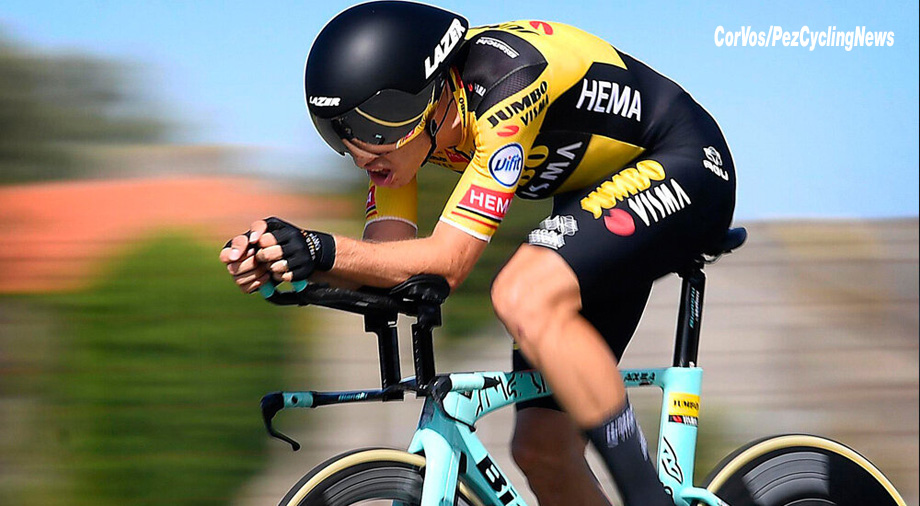 In the Belgian team, Van Aert and Evenepoel will have to deal with the new Belgian national coach, Sven Vanthourenhout, in Tokyo. Both riders are very pleased with Rik Verbrugghe’s successor. “Sven has been in the race long enough to know how to build a team. In recent years he was also… the T2, they would say in football. It is a good step. Without prejudice to Rik, who has been very successful at European and World championships,” said Evenepoel. 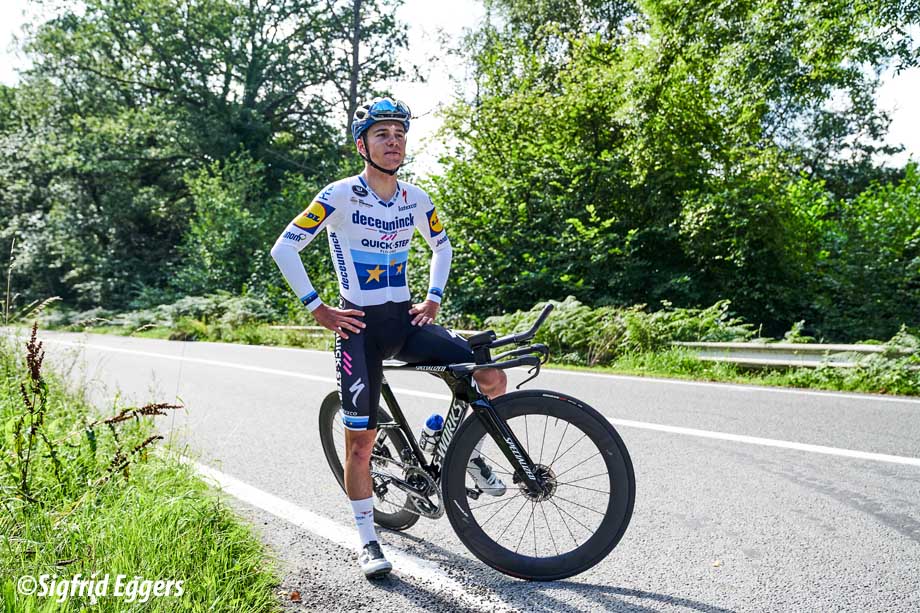 Van Aert has been working with Vanthourenhout for some time, who is also the coach of the national cyclo-cross team. “It is extra easy for me that I can work with the same coach on the cross and on the road. Sven is the right man in the right place. When he was still assistant to Kevin and Rik, the riders felt that he already arranged a lot of practical things.” 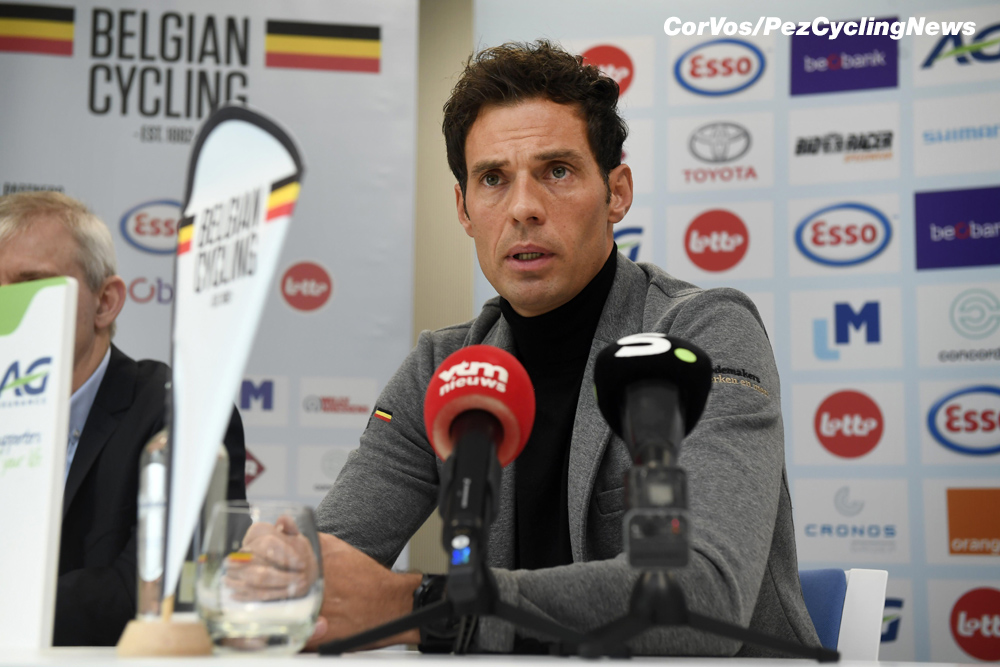 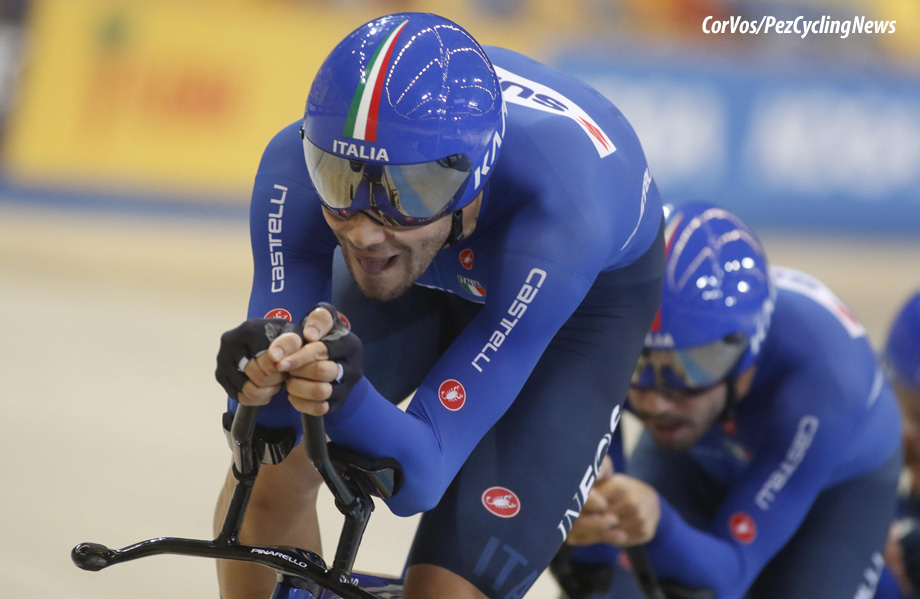 No Euro track champs for Ganna or two team mates

Ganna was with the Italian national track team in Montichiari to prepare for the European Championships, but had to go into isolation after a positive corona test. His fellow countrymen Liam Bertazzo and Michele Scartezzini were also infected. “I also want to apologise to my teammates,” he said at the time. 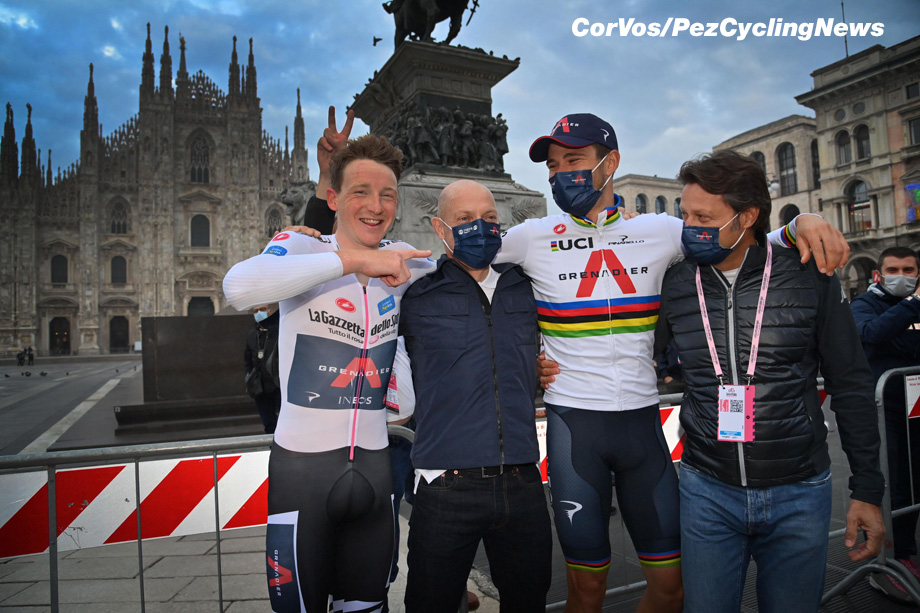 Ganna went into isolation along with his sister, brother and father, who are also infected. The INEOS Grenadiers rider was tested again last Friday, in the hope that the result will be negative this time. “And then it is to be hoped that there will be no permanent physical damage. You just don’t know for sure.” 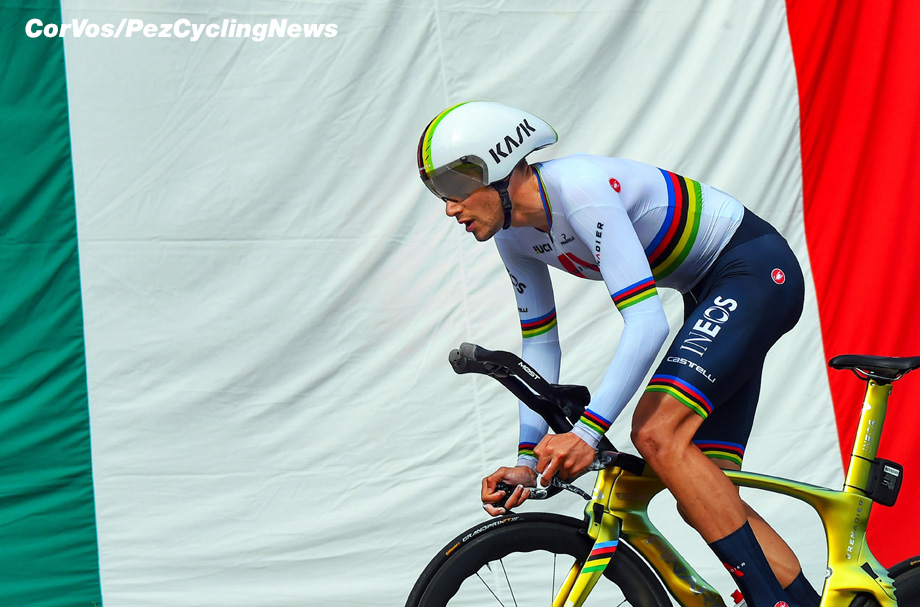 Olympic gold to go with the Worlds rainbow?

“I will undergo some necessary tests as soon as I recover. Then it is also possible to resume training.” Ganna developed the symptoms after his first positive test. “I had a fever for three days, to be precise 39 degrees, and that didn’t get any better after taking paracetamol. I had bone problems and classic flu symptoms. I also suffered from loss of smell and taste for a week. I did a few tests with mustard and alcohol. I can now taste honey again, but that is not the case with coffee, for example. To the people who underestimate the virus: experience it yourself.” 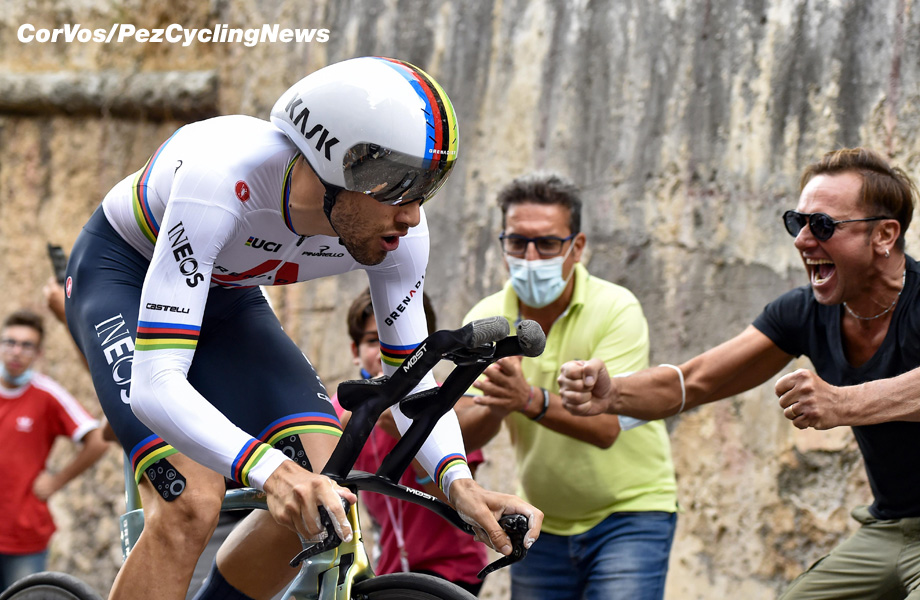 Hoping for a full recovery