VardaVibes: I Am From France

We last heard from Christine Vardaros as she ventured off to join the women’s pro ranks in Europe. She promptly disappeared into a world often known more for shady managers and unpaid wages than bike racing… but the good news is she’s back – and ready to rock on her new French team – team Pruneaux D’Agen – here’s the update…

As of January, I officially made the switch from Belgium’s Lotto-Belisol Ladiesteam to France’s Pruneaux D’Agen and I couldn’t be happier! At the time, though, I wasn’t quite sure it was the right decision to go with ‘Les Prunes’. I had traded in the possibility of doing a full Spring Classics schedule for a theoretically tenuous situation; I don’t speak French, I know nothing about the team since both riders and management changed from 2006, and I know nothing about southern France. 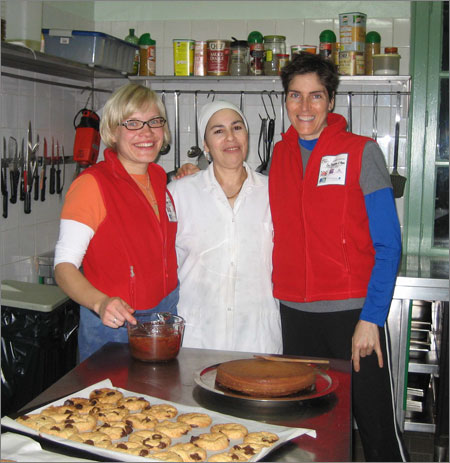 Christine (r) made some classic American cookies – Tiina made Finnish cake – globalisation at its best.

Pruneaux d’Agen is headquarters for the world-famous prune industry located in the picturesque Lot-et-Garonne region of south-west France. What separates their prunes from all the rest is that they are gently dried while keeping them juicy and tender enough to eat without soaking.

After spending a week with the team at Presentation and Training Camp though, I came to realize I had indeed come out on top: what I got in return for a few lost bike races is more valuable than the terrain I ride. 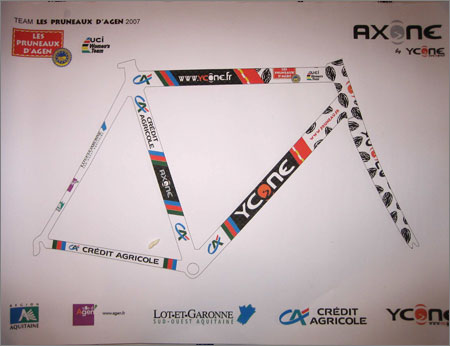 TEAM PRESENTATION
After ten hours of travel to include two taxis, three trains, and a car ride, I arrived at Team Presentation location in Agen, France. I was sure we drove up to the correct building because Team Manager Nicolas Coudrey and I were greeted by a 20-foot tall maniacally enthusiastic inflatable prune swaying in the wind. Once inside, I found the rest of the team all kitted up for photos. After a 2- second meet-and-greet, I got an oversized duffel bag filled with team stuff, and changed into my matching kit. 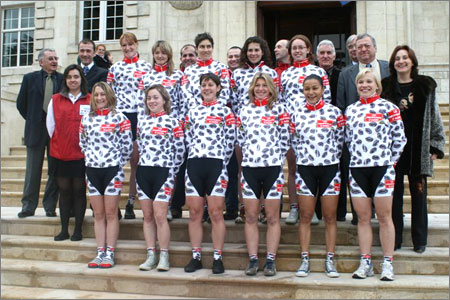 There’s really nothing like shorts and a jersey during the unpleasantness of the late French winter.

Donning our skimpiest jerseys and bibs, we braved the unusually cold weather for team photos. I swear this must be some sort of training camp hazing ritual. Immediately following, the racers, management and support crew all gathered around a large oval table in a conference room. In clockwise order, we introduced ourselves. When it was my turn, I tried to be witty, intelligent, fun, and thorough. As my eyes scanned the room following my mini monologue, they were met with blank stares, half smiles and inquisitive brows. It didn’t take long for me to realize that only about two or three people in the room caught half of what I said (in English). 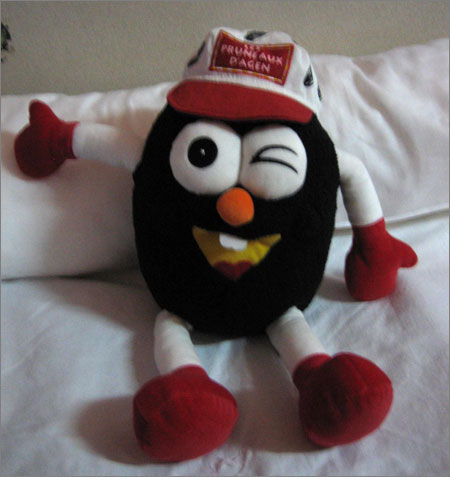 Don’t forget about the team mascot.

We were next whisked into a tiny room filled with tables and chairs. It was separated from the Team Presentation area by a somewhat troubled fan-style panel curtain; the panels wouldn’t lie in the same direction, creating big gaps. This, combined with the fact that the two halves of the curtain did not quite meet, meant that our attempt to change discreetly into official casual wear for more photos was instead a semi-nude scramble for privacy behind backstage chairs and tables, all in full view of our snickering audience. 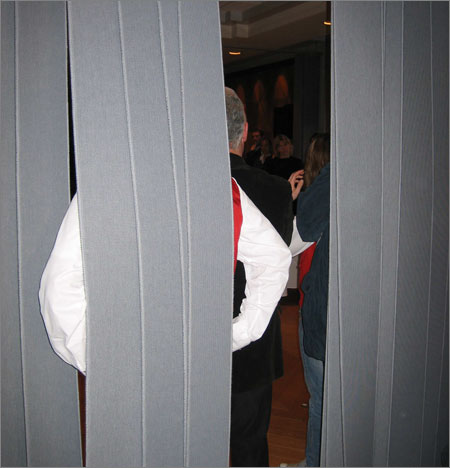 TRAINING CAMP
I attended training camp with a preconceived notion that I was going to be tortured on the bike for a minimum of six hours a day. I was pleasantly surprised to find that they opted instead to keep the riding subdued for the first few days. We rode three hours a day and spent the rest of the time doing activities together such as going to the Spa, making desserts and attending various seminars on relaxation, bike repair, our team website, and internet training logs. 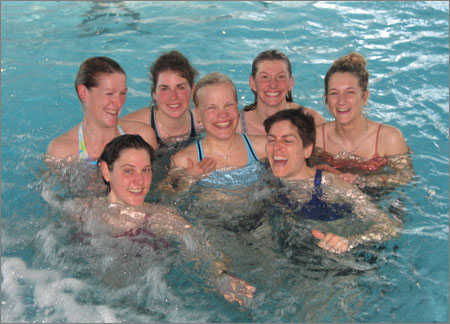 It was a hard, difficult time, but we managed to make it through.

The most challenging event was Nicolas’ insistence that we be up by 7am and ready for our morning footwork by 7:05am. The first morning I was a bit unprepared, thinking we’d be going for a leisurely walk around campus to wake the body up. I wore no fewer than seven layers of thick clothing, along with a winter hat and waterproof gloves – totally inappropriate for what turned out to be a fast-paced run. By comparison, everything else on the daily schedule was easy – I think this was his intention! 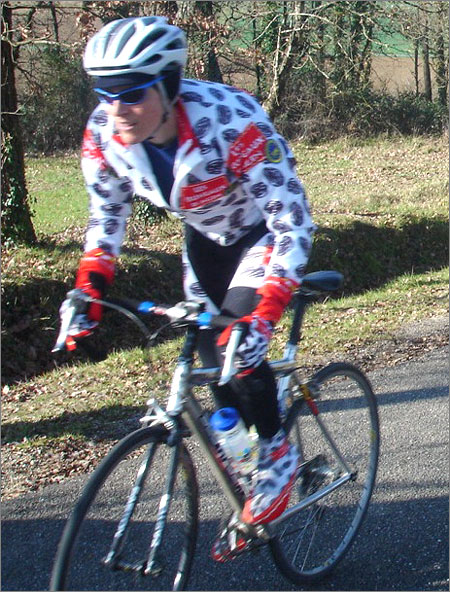 The following morning I was not only suitably attired but prepared with a grand plan to turn the run into a more pleasurable experience. Like Museuuw when he won the World Champs in Lugano, setting tempo on the climb to discourage climbing specialist Mauro Gianetti from attacking, I went right to the front where I controlled the pace by more or less bodily shutting down any available passing room. I did this every morning for the rest of training camp.

The riding in southern France was postcard-worthy. We rode among rolling hills blanketed by vineyards. Every hill we crested exposed incredible views of lush green fields dotted with centuries-old buildings and churches, small forests, and more vineyards. 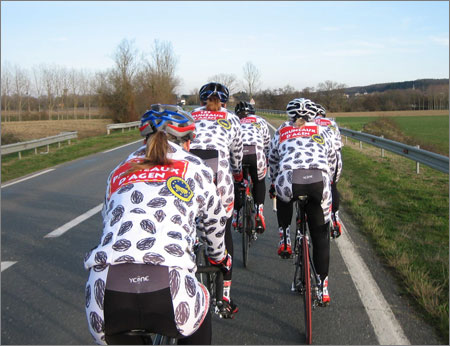 Getting in the bike practice…and learning English.

I Come From France
When the training pace was easy, the girls rotated in a double paceline to ensure they each got their English lesson in for the day. In exchange, I was handed a few more French words to add to my rapidly growing vocabulary. Little do they know that my goal is to get them all fluent in English so I never have to learn French! So far, so good. I have overheard them on numerous occasions talking in English (albeit jokingly) to each other. A typical exchange was, “Hello, and how are you today? I am fine, and how are you? Where do you come from? I come from France.” (Where else would they have come from – Remulak?) Contrary to stories I had heard about the French being over-sensitive to mispronunciation of their language, my teammates displayed endless patience as I repeatedly botched every word they attempted to teach me. 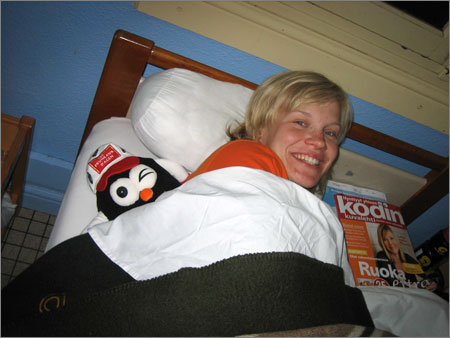 Thanks Tiina, you’re the best.

Even with the gals’ encouragement and support in helping me to adjust to a completely French environment, my experience would have been a lot more trying if not for the kind translating assistance of my Finnish teammate Tiina Nieminen. It was also a treat to have one person with whom I could easily communicate. I had no idea how exhausting it can be to constantly try to talk with others who have no idea what you are saying! 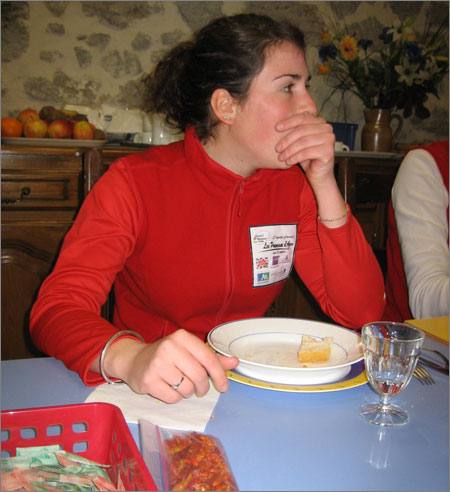 The time we spent laughing, sweating in the sauna, pretending to meditate at the “relaxation” seminar, and taking turns slipping chili pepper into each other’s meals, really brought us together. When you bond with others, it is easier to be inspired to work hard for them. I am sure this will prove invaluable on a team as new as Pruneaux D’Agen. 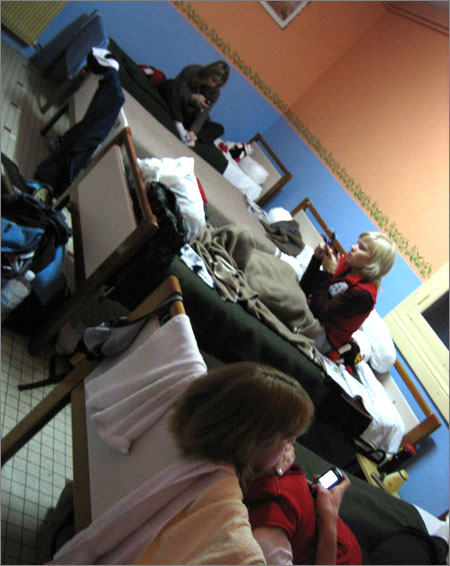 Les Pruneaux D’Agen will be focusing mostly on races in France since it is most important to their title sponsor. We will be contesting all of the French Cups and many French stage races such as Tour de L’Aude, Ladies Berry Classic and Grand Boucle Feminin. We will also be attending World Cups, to include Fleche Wallonne and Tour de Berne. Since I have chosen to keep my apartment in Leuven, Belgium, I expect to do a lot of traveling these upcoming months!

Cycling Gets Cool In Swinging London