Velopedia: The Infographic Book Of Cycling

PEZ Bookshelf: It said, in that hackneyed phrase, that a picture is worth a thousand words and this is perhaps true in our favourite sport of cycling, which has not produced a great deal of immortal literature but an endless stream of memorable images. Think of Anquetil and Poulidor shoulder-to-shoulder up the Puy de Dome, or those close-in shots of team time trials, Hampsten on the Gavia, the aerial photos of the peloton in the Alps or passing the chateaux of the Loire, or Merckx doing just about anything. But images can be also used to vividly express concepts and a delightful new book, “Velopedia,” which bills itself as “the Infographic Book of Cycling,” provides a highly original and striking new approach to looking at cycling. 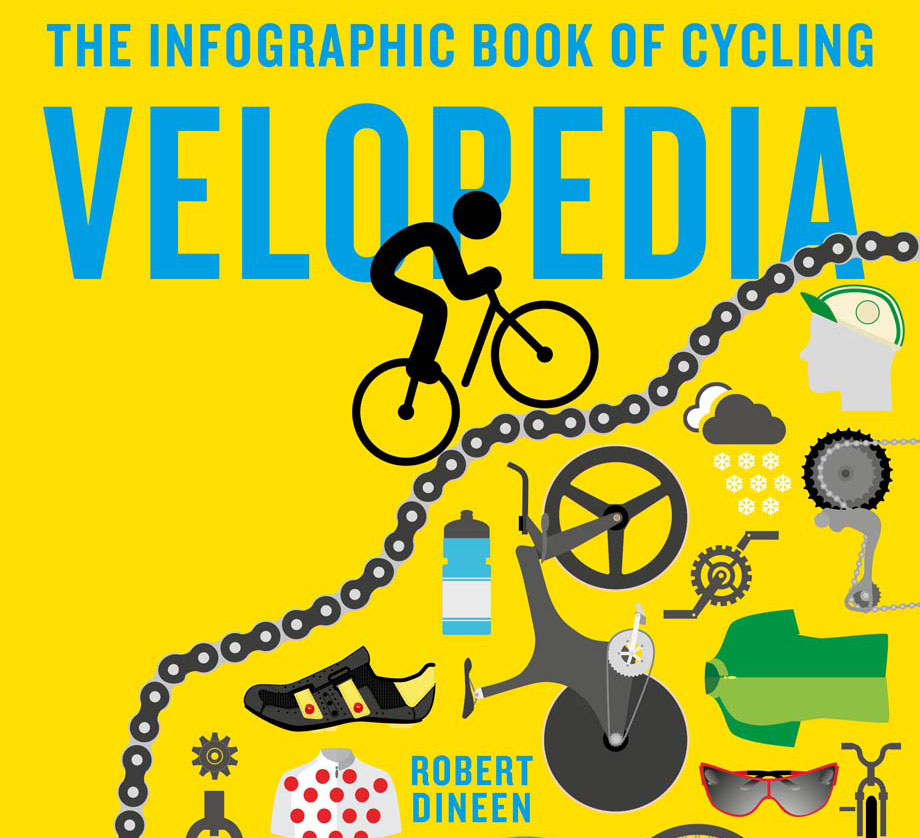 There are no introductory remarks to this book, which was authored by Robert Dineen, who has previously written books about British cycling legends, including Reg Harris. The hand of authorship is light as the book is much more a work of illustration, using many sources, and arranged by clearly skilled graphics experts. Foremost of these has to be Paul Oakley, who is responsible for the beguiling portraits of noted cyclists and, I suspect, for the excellent consistency of the design of the book to match those portraits. 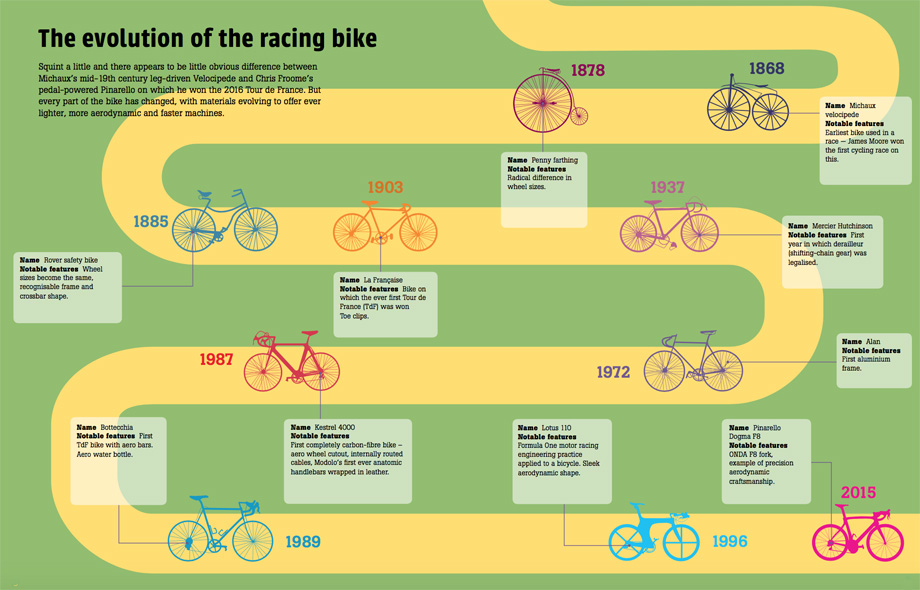 It seems that almost every aspect of road and track racing is touched upon in some way. Fans of cyclocross or mountain biking will not find anything here but this focus is certainly a strength, allowing coverage of the history, the landscapes, the stars, the races and the technologies of cycle sport in this way. The evolution of the racing bicycle is elegantly illustrated from 1868 to 2015, identifying each of the landmark bicycle’s notable features. 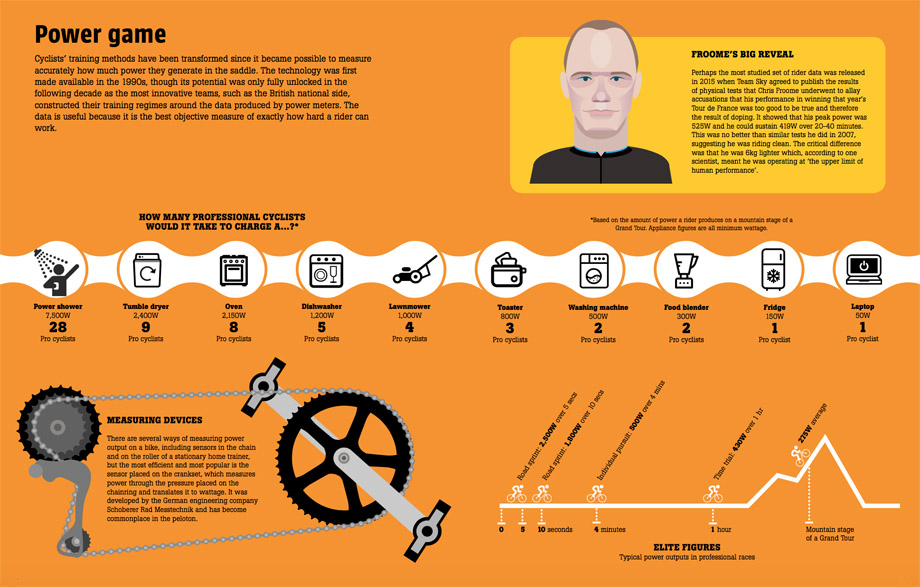 Continuing to rummage through this smorgasbord of cycling delights, we soon come to the spread that answers the burning question of how many pro cyclists it would take to power up a toaster, among many other common household appliances. The answer is that to get those 800W you would need to tap the energy of three of them. Entertain your friends (well, if they like cycling) with the news that a tumble dryer would need to be powered by 9 pro cyclists to function. The same page also offers a paragraph about power measurement devices and typical power output by racers in professional events. 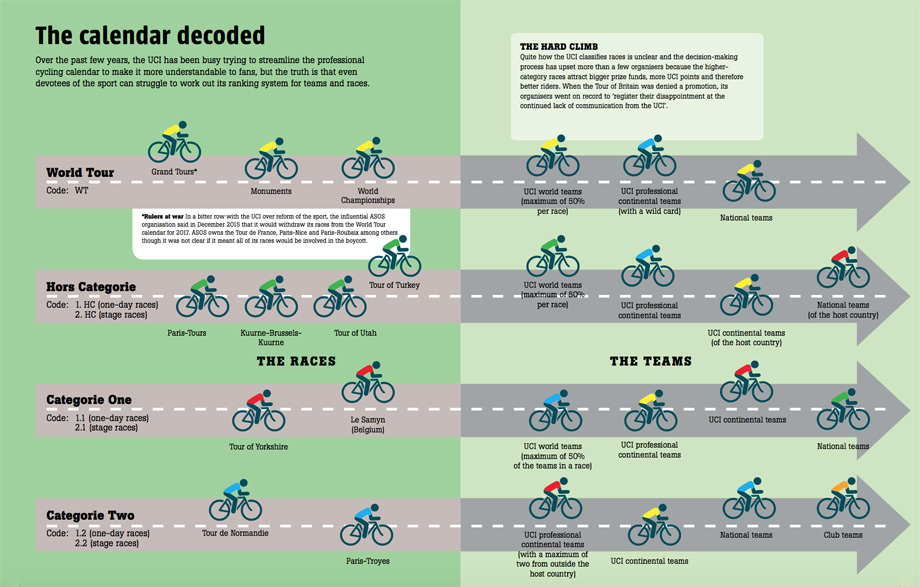 Even those of us claiming to be cognoscenti of the cycling world will find useful information, such as an easily-read explanation of those UCI race codes—what is a UCI 1.1 event compared to a UCI 2.1? Where do the various teams fit in? It is not always clear, even in these simplified graphs, since this 2017-published book notes the outstanding controversy between the UCI and the ASO. 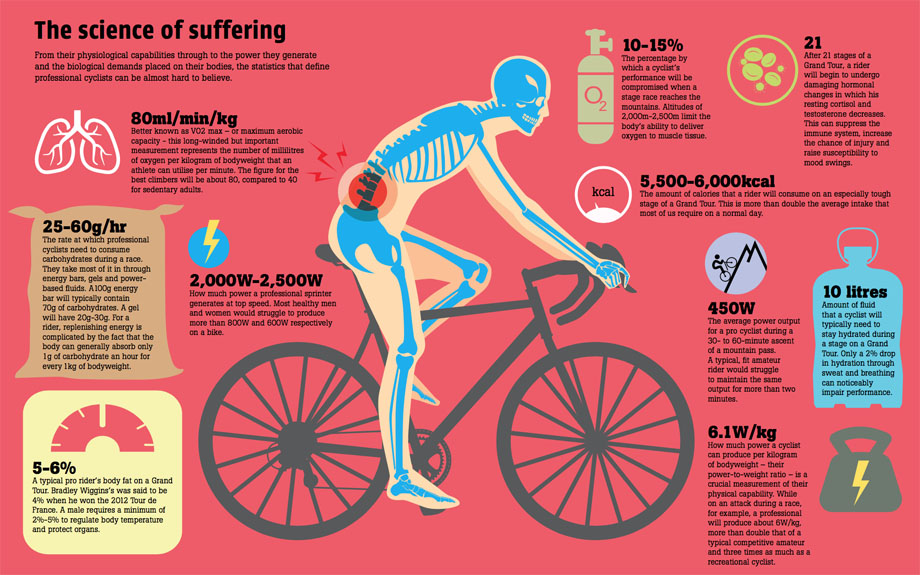 Having learned something about power output, we can really enjoy another graphic explanation of the stresses imposed by pro racing on the human body. Even those of us who make a serious effort to keep hydrated during a long ride would be flummoxed by the demands of a single Tour de France stage where 10 liters of fluid would need to be consumed to keep on going. Many of us could probably enjoy consuming 5,500-6,000 Kcals of food daily—up to a certain point. 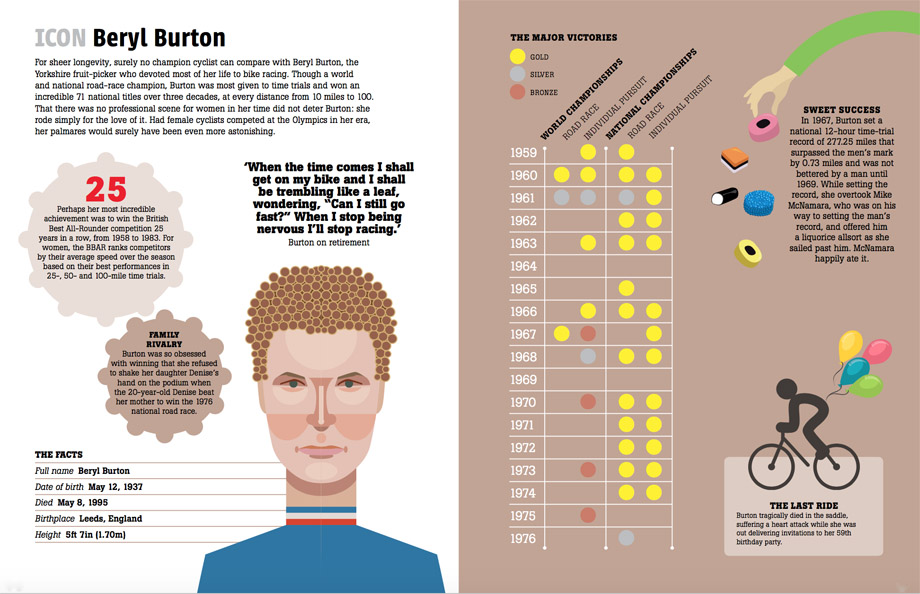 Published in Britain, “Velopedia” has an occasional salute to the home country and this is particularly welcome with the pages devoted to the truly astonishing career of Beryl Burton, whom I think should be regarded as one of the greatest natural talents and very best time-triallists, British or not, man or woman, to have ever lived. The chart showing her national and world titles gives one pause and in a world where woman athletes would be given the same opportunities as their male counterparts (and this is still not the case) she would be so much more famous. 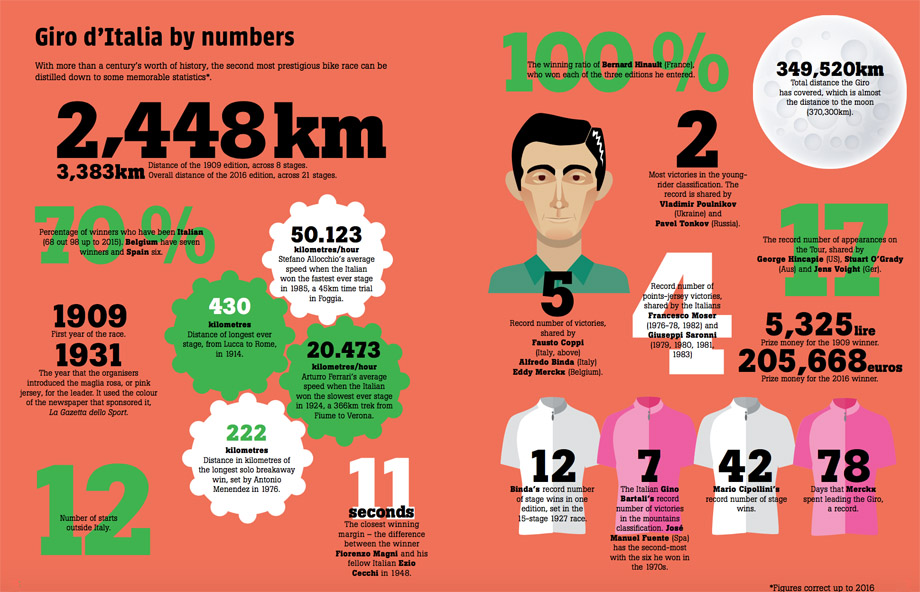 There are pages devoted to individual races, including all three Grand Tours, with interesting factoids that adroitly sum up each. For example, we often read of the four five-time winners of the Tour de France, but it is not often noted that there have only been three five-time Giro winners: Coppi, Binda, and the inevitable Merckx. Roberto Heras managed to win the Vuelta four times between 2000 and 2005, missing out only on 2001. 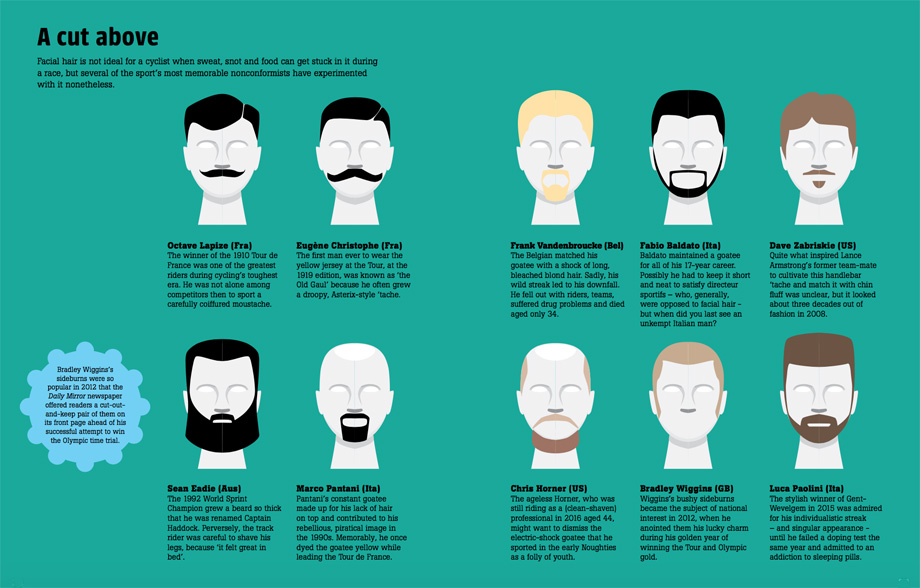 The creators of this book have a sly sense of humour and who would not enjoy a fine graphic devoted to the facial hair highlights of the pro peloton? 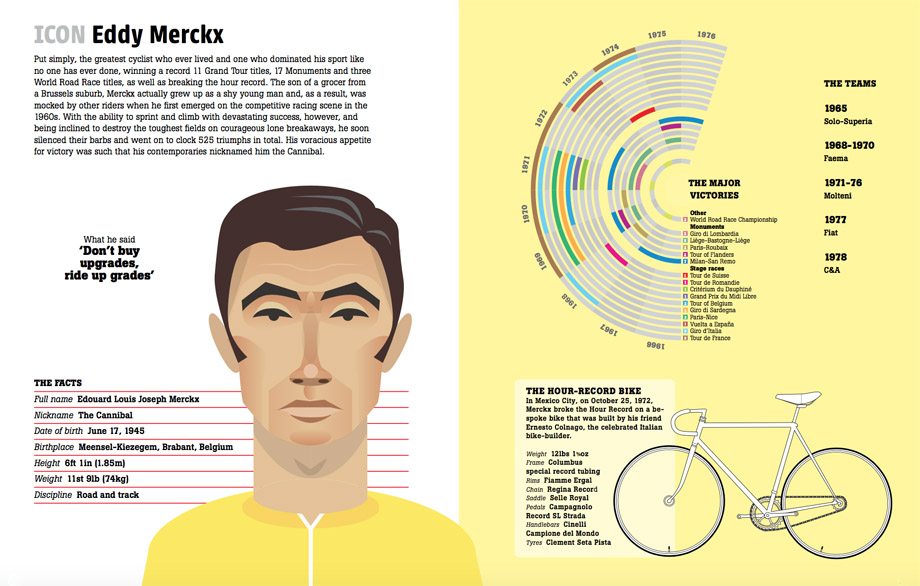 Of course, the Cannibal has his own feature and all these years later (he retired in 1978) it is difficult to believe how one person could so dominate a sport. The chart of the major victories is a fine representation of his successes. 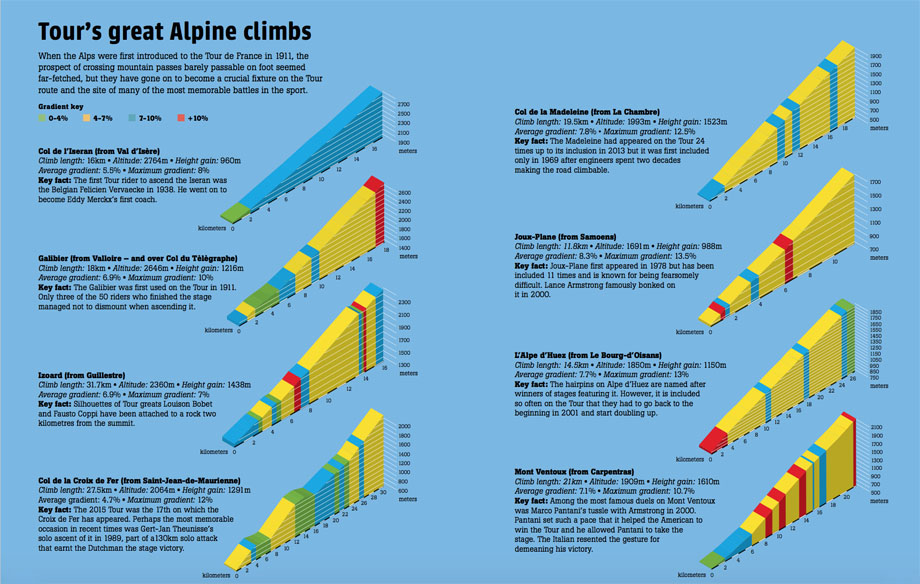 One of the obvious elements from graphic display—and they are often shown this way—are the grades of the most famous climbs used in pro races. These are more familiar than many of the other pages but also have some entertaining key facts attached, such as the Izoard featuring silhouettes of Louison Bobet and Fausto Coppi on a rock near the summit.

“Velopedia” is a enormous pleasure to simply browse through. The quality of the design and production are of a very high order, marred only be a handful of minor text errors such as referred to the ASO as “ASOS” and naming Maurice Garin as one of the five-time Tour de France winners when in fact he only won the 1910 edition. But these small editing mistakes should not discourage anyone, whether a neophyte or a hardened tifosi, from indulging in this charming book. You may not be able to power your dishwasher but you will definitely have fun learning something from the obscure corners of our sport! 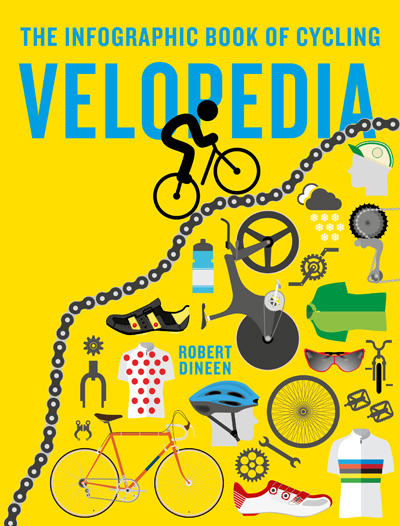 When not wishing he had a nickname as good as “The Hobgoblin of the Brittany Moors,” (see Naming Rights Above), Leslie Reissner may be found trying to up his wattage at www.tindonkey.com.

CoolKASE – The best way to keep your items cold while on the GO!

How Bike Brands Are Coping With Covid