Vuelta a España Retro: With this year’s Vuelta a España making a return to Asturias and l’Angliru on Sunday, Ed Hood got his diary and photo album out for one of his favourite days on a Grand Tour. The mythical climb of the Alto de l’Angliru sticks in the memory for reasons both political and sporting – Ed’s day on the Angliru.

Twelve years ago, it can’t be? 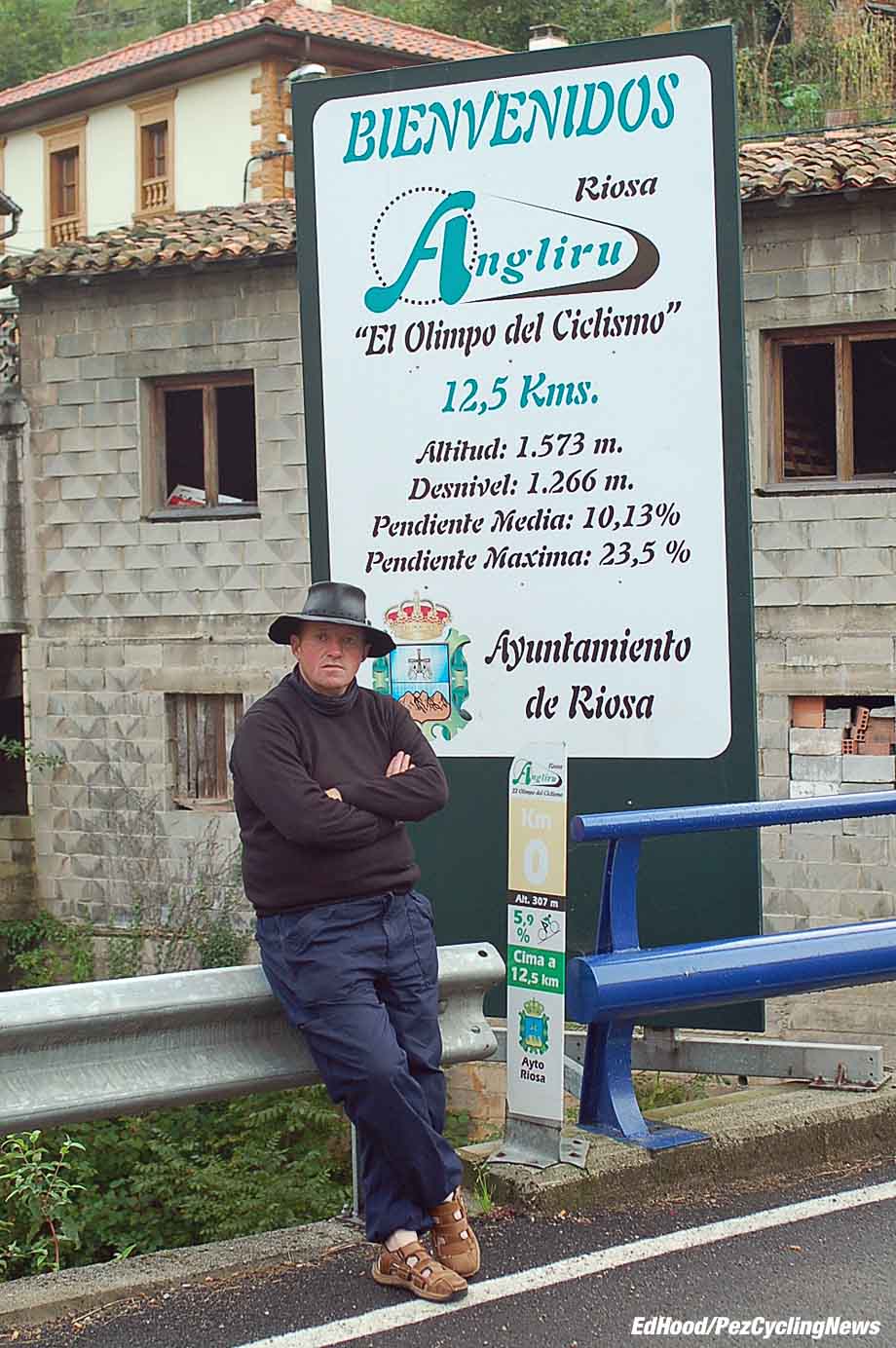 But it is, since my hill climb obsessed buddy, Dave Henderson found out about the Angliru, ‘the toughest climb in European pro cycling’ – it was time to high tail it to Asturias. . . 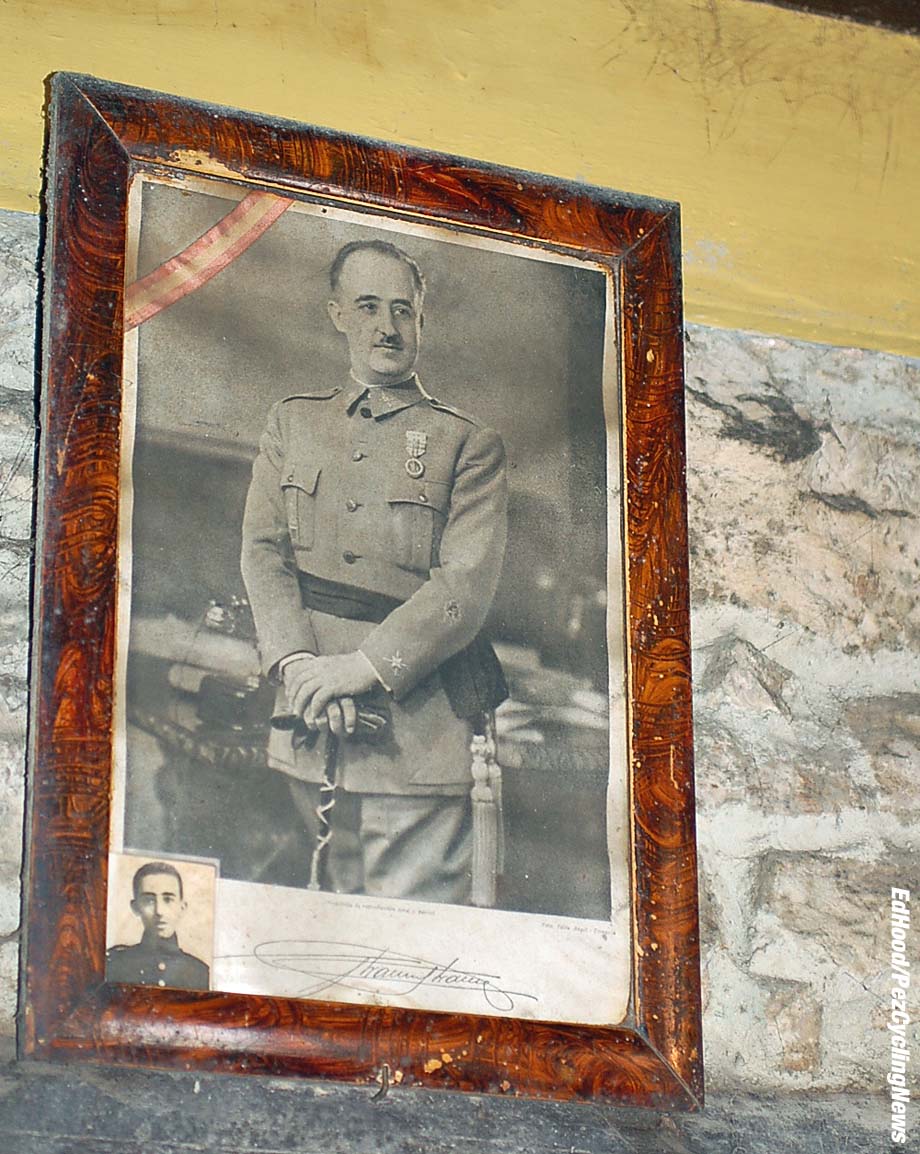 The first thing that you discover when you get into the valleys of Asturias is that this is not, ‘The Costas; the ‘old days’ aren’t forgotten here – imagine walking into a bar in Germany and seeing a picture of Hitler on the wall? In El Padrun, the Caudillo (Strong Man), his excellency Generalissimo Francisco Franco stares imperiously down at you from the bar wall. 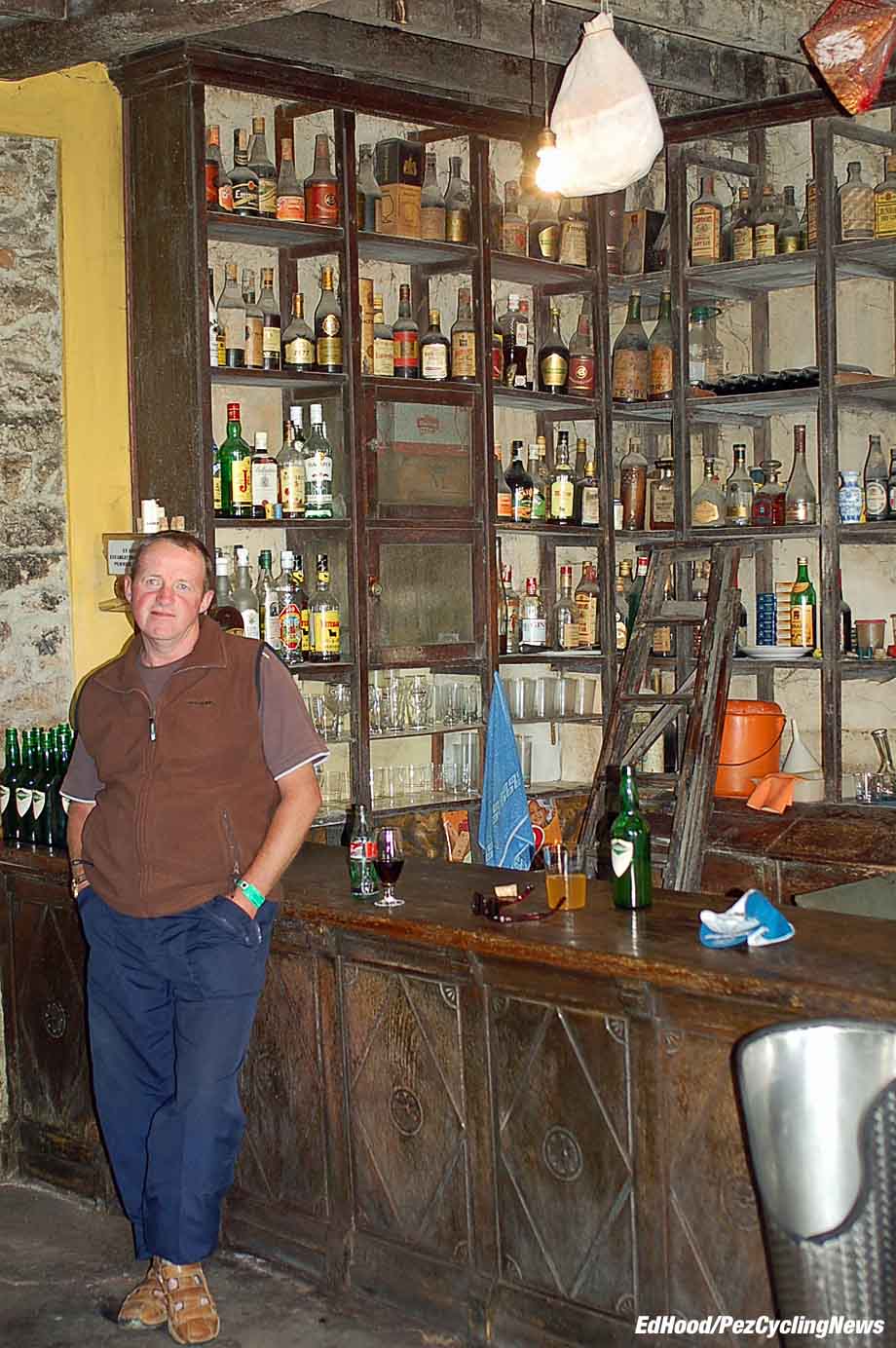 But this is heartland, very few tourists in these hills and valleys, world opinion means little in these parts; authentic bars though, even if they are right wing. . . 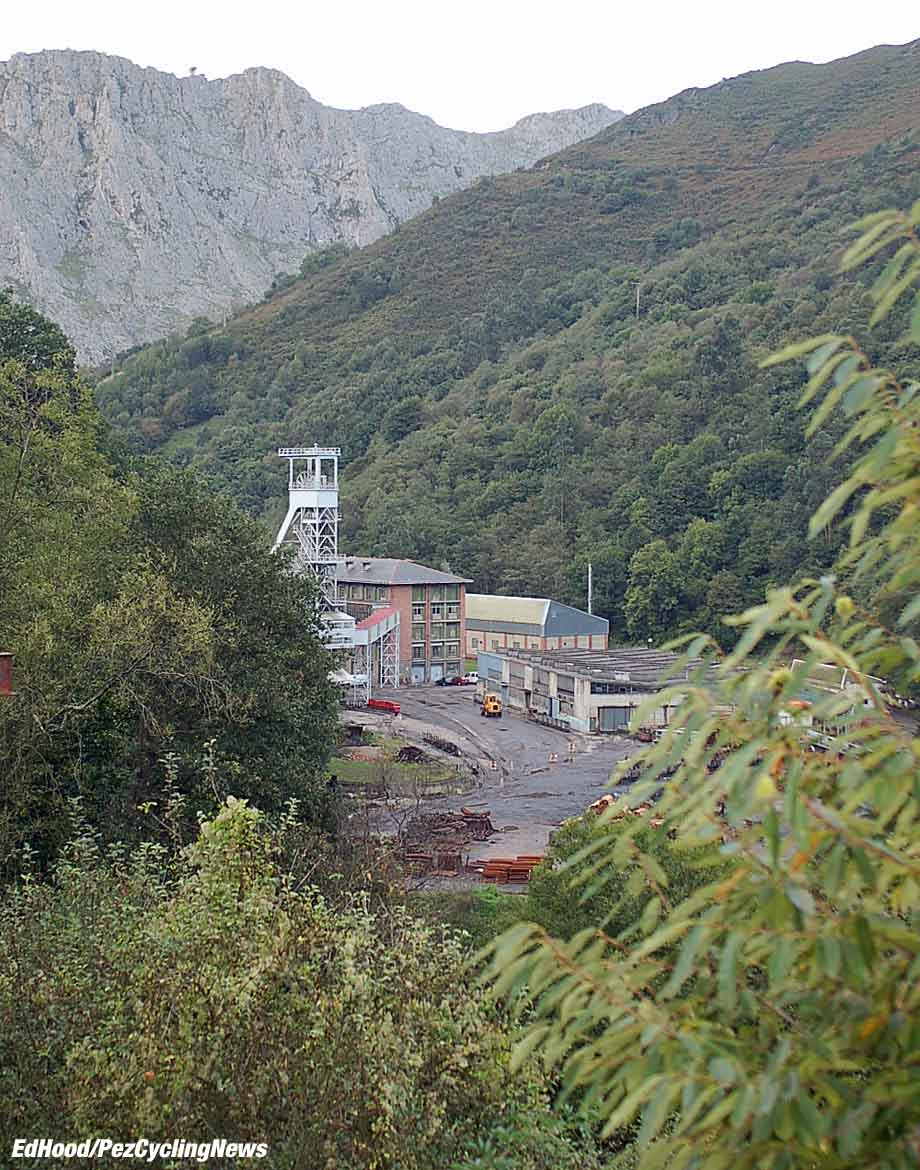 On the other side of the political coin, this is mining country where the miners fought Franco’s Fascists back in the 30’s in the ‘Spanish War’ with the dynamite they usually used to blast the black gold from the bowels of the earth. 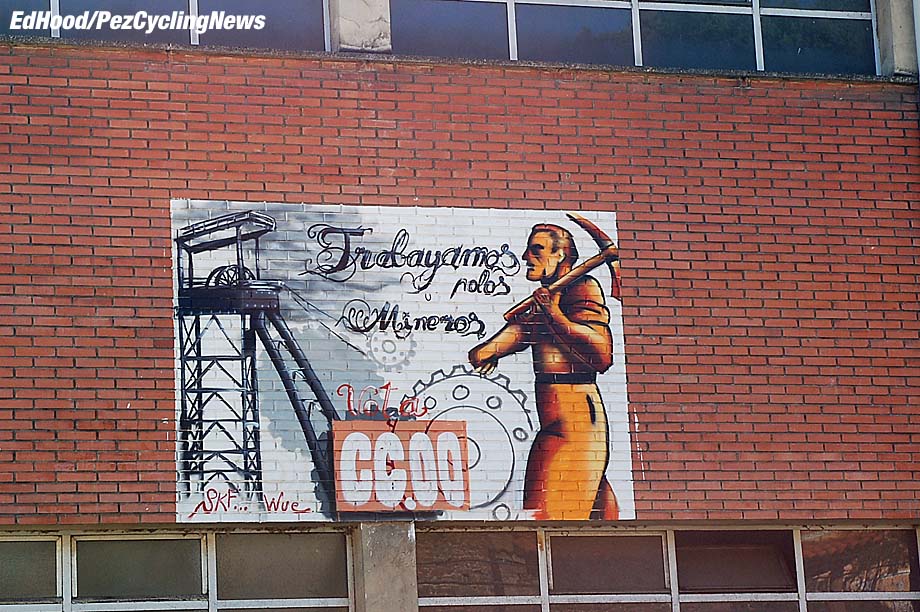 Whilst the unions may not have the power they once did; there presence is still felt here; all over Spain you’ll still find union run social clubs. 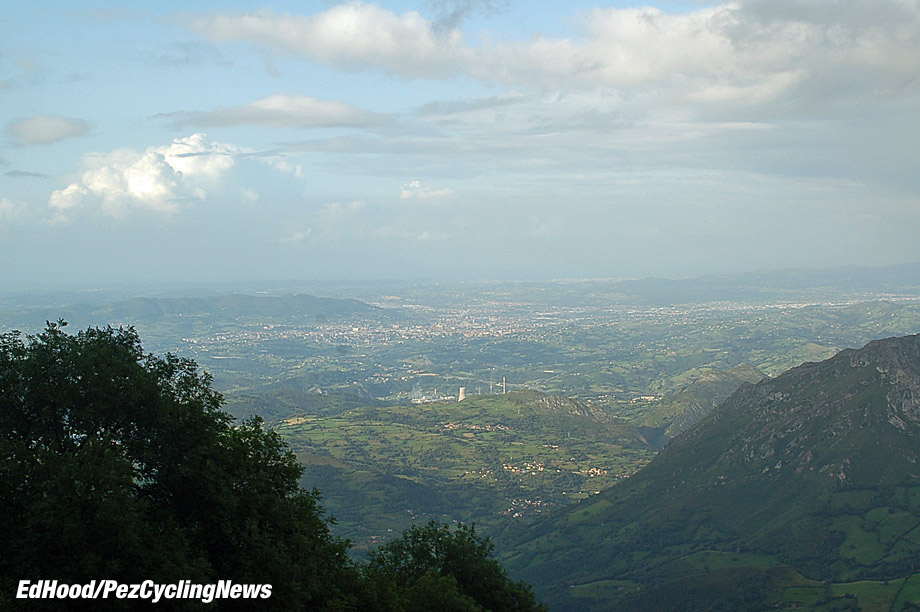 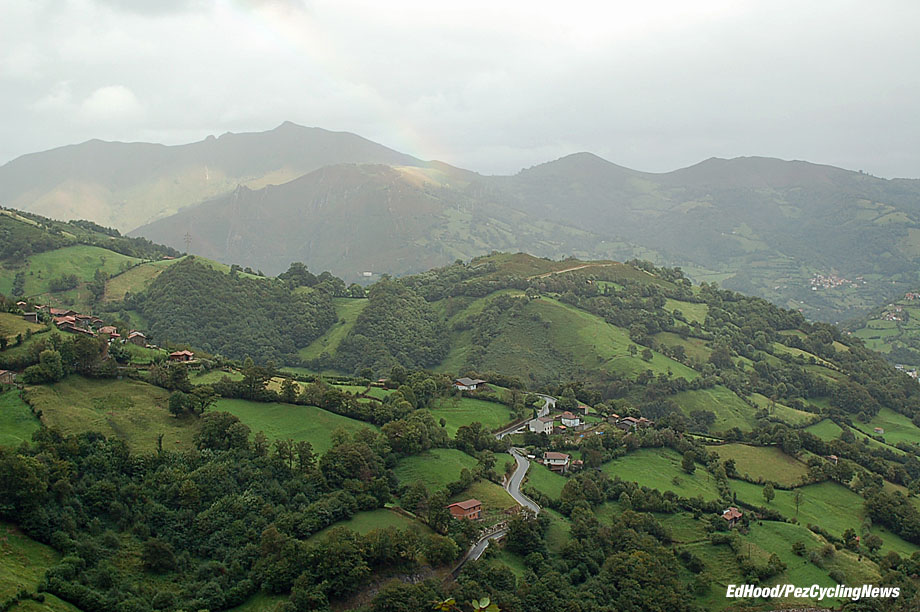 But what of the legendary climb? We went up a day or two before the race to see what the fuss was about – and when you’re up there it is very much like looking out of an aeroplane window. 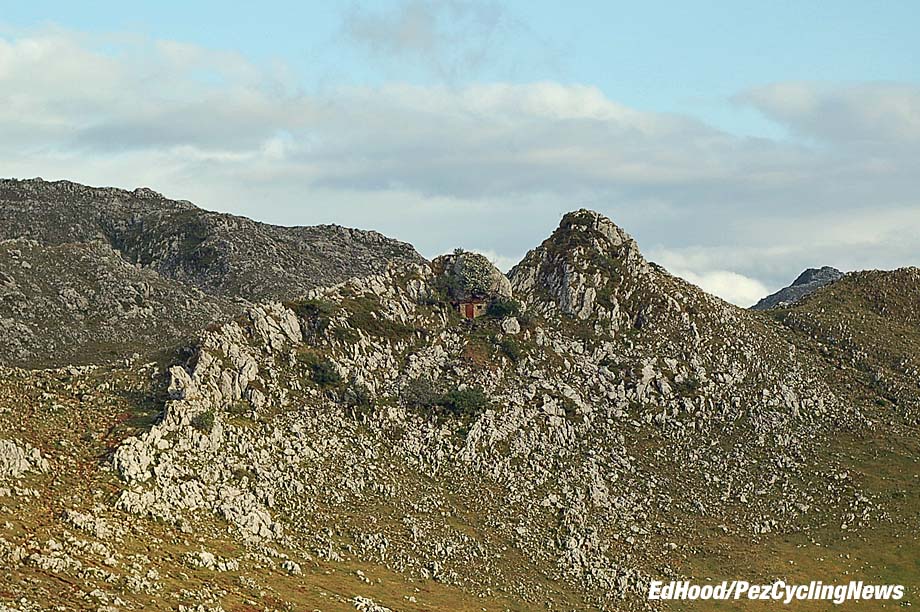 What’s up there at the top? Nothing, you could be on a distant planet. 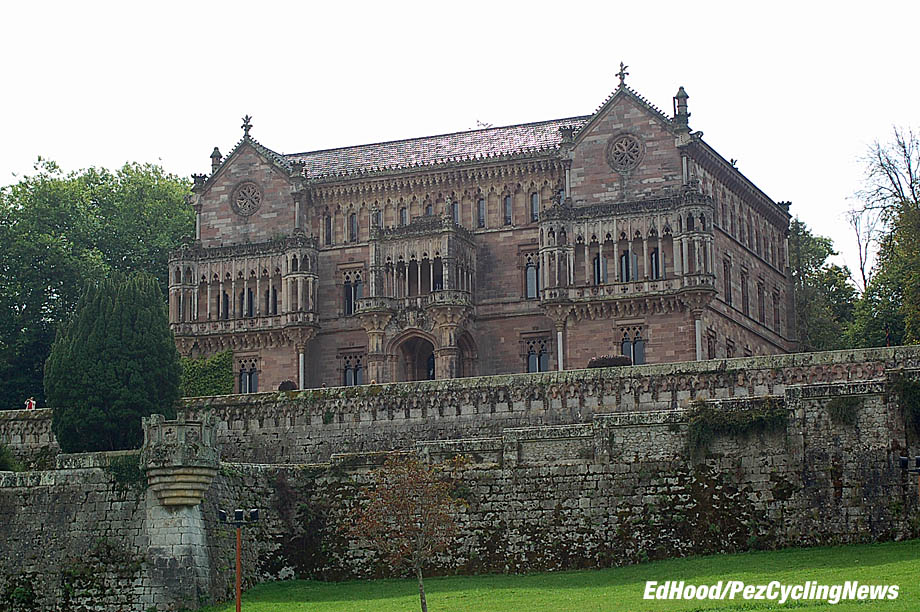 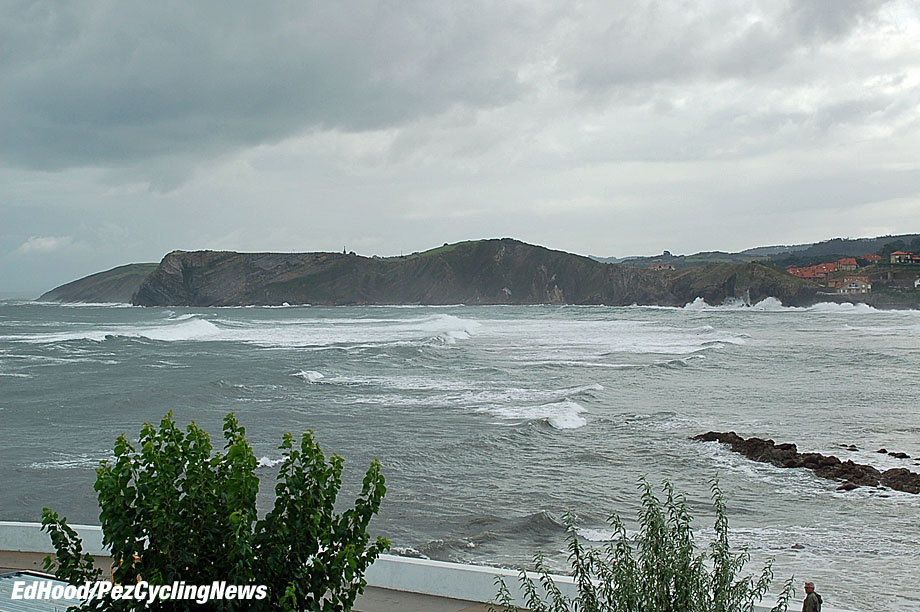 The day before the big day at altitude it was the rest day in Comillas; famous for it’s Gaudi buildings, beaches and surf. 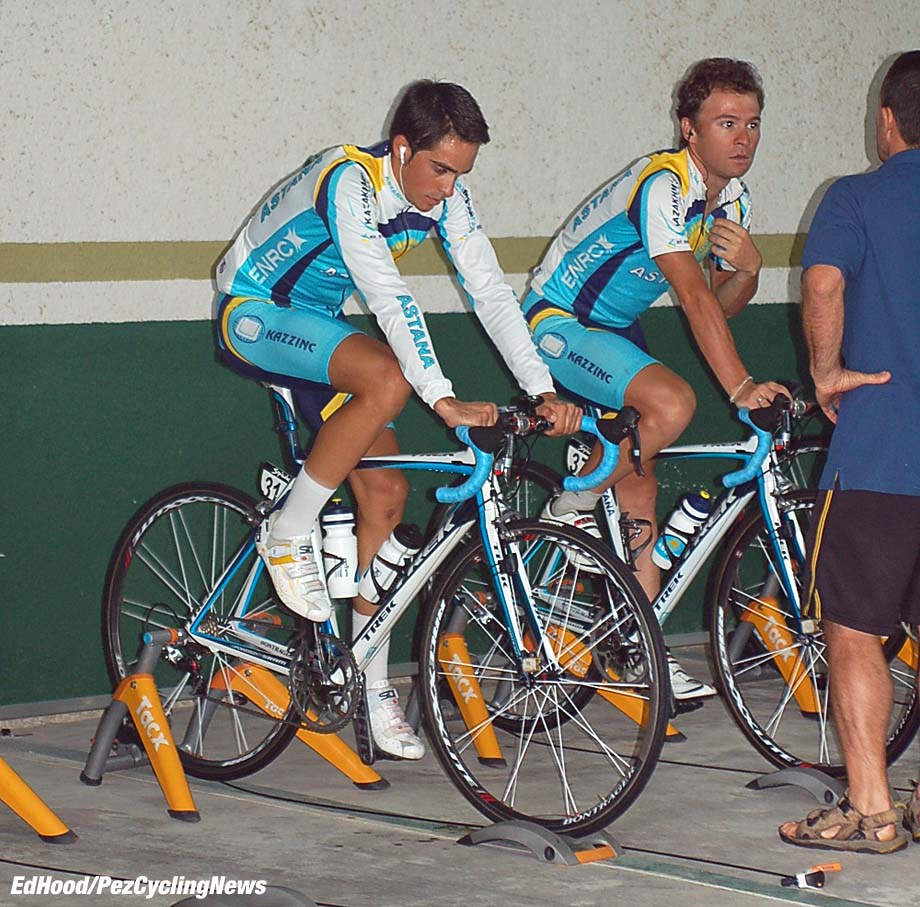 It was a bit ‘dreich’ – wet and miserable – as we say in Scotland so Bert’s rest day run took place in the underground car park alongside his Astana team mates. 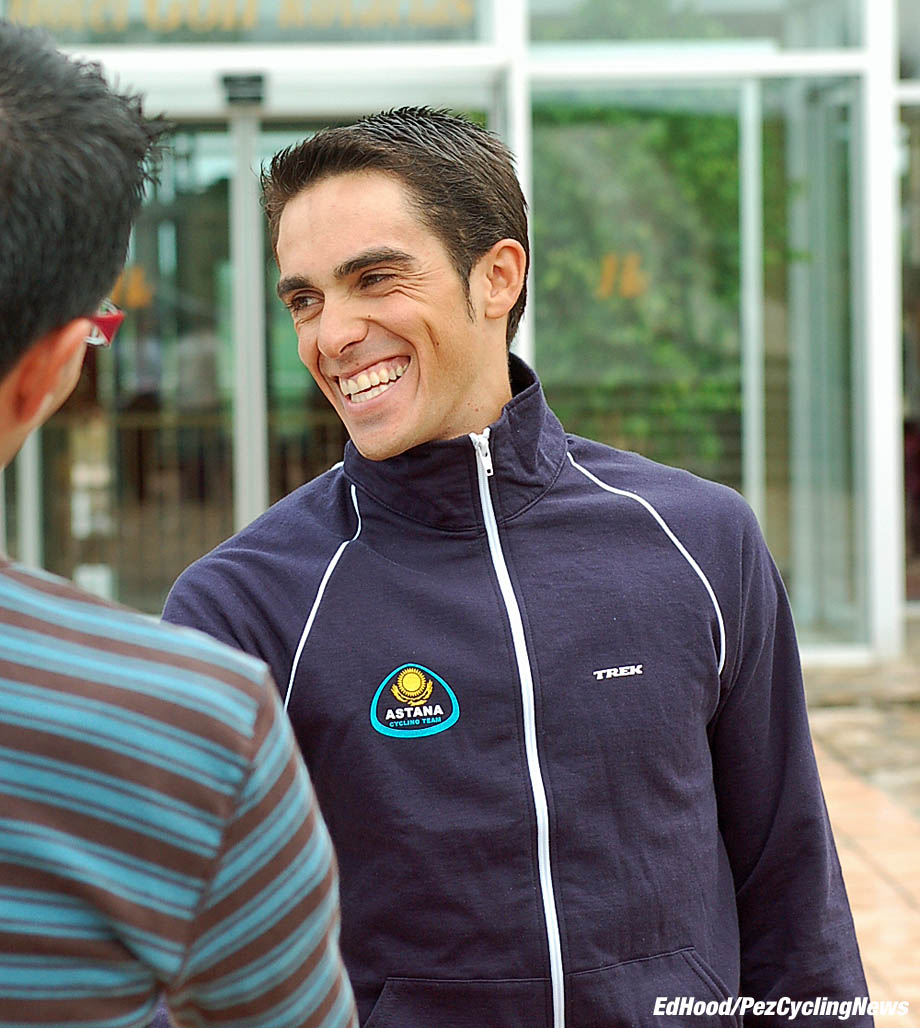 After his spin he was all smiles and happy to chat to anyone who approached him; before heading off for lunch with friends. 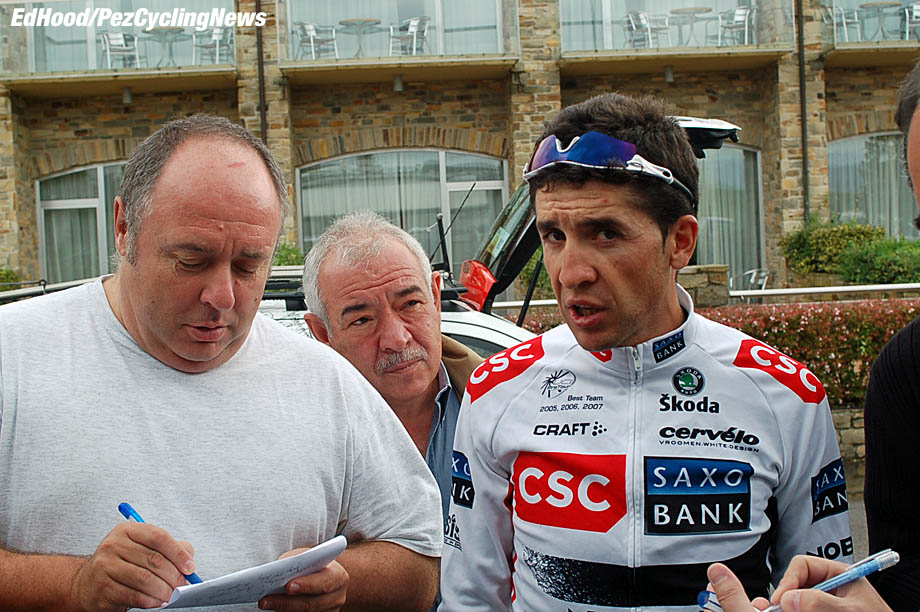 Not too many smiles from Carlos Sastre though; we were at the press conference after the final time trial in the Tour de France which he won – rarely has a Tour winner looked so miserable. 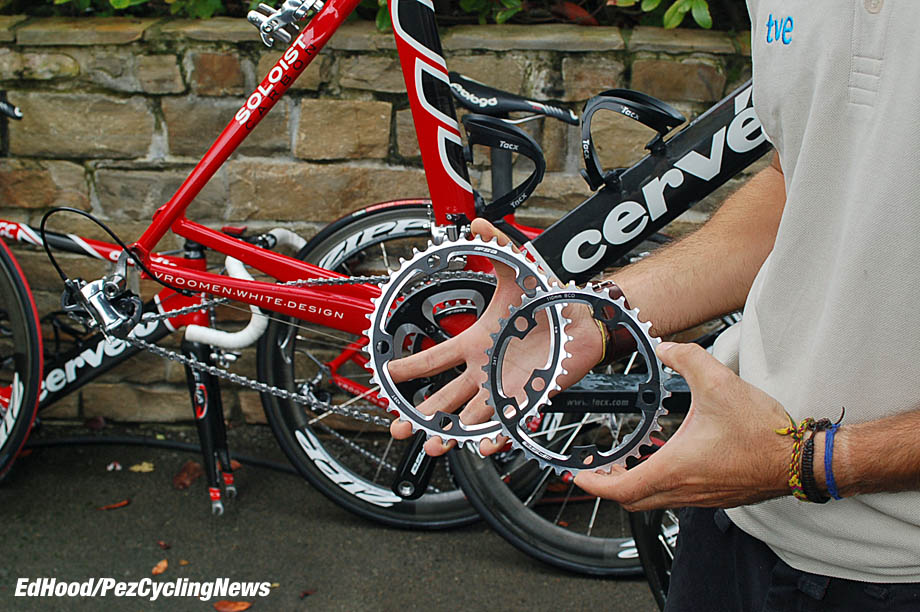 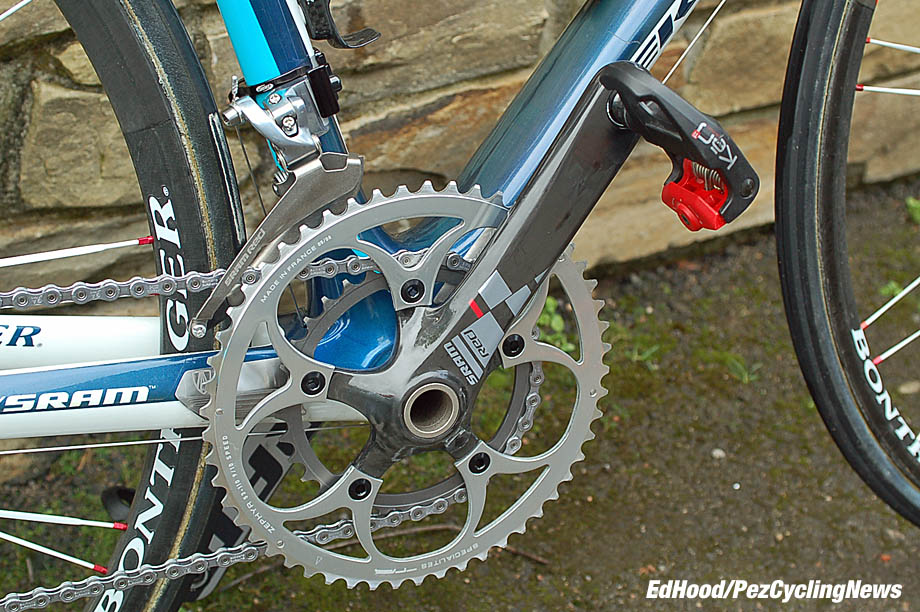 But when you see a 34 ring on Alberto Contador’s bike then you know it’s one serious hill. 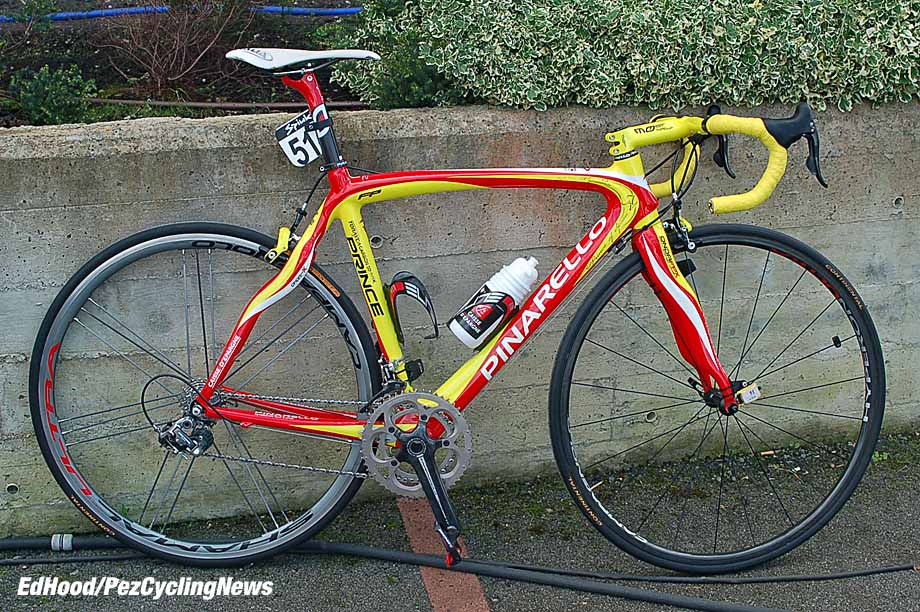 And there was no way that Alejandro Valverde was going to let anyone forget he was Spanish champion. 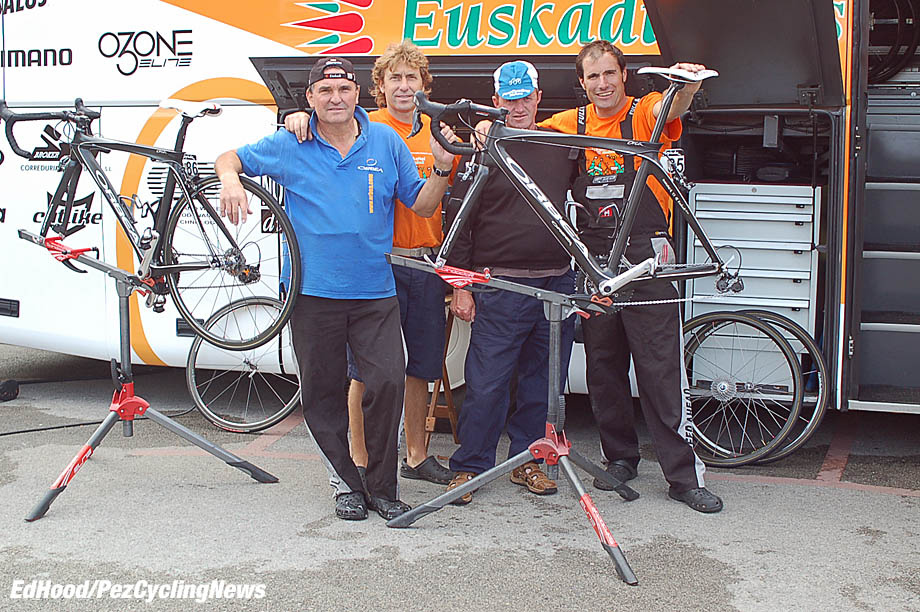 And whilst the French mechanics try to put you off by blasting close to you with their pressure washers, over at Euskaltel, we’re all compadres – you’d expect nothing less from a team whose frames came from a workers’ cooperative, Orbea. 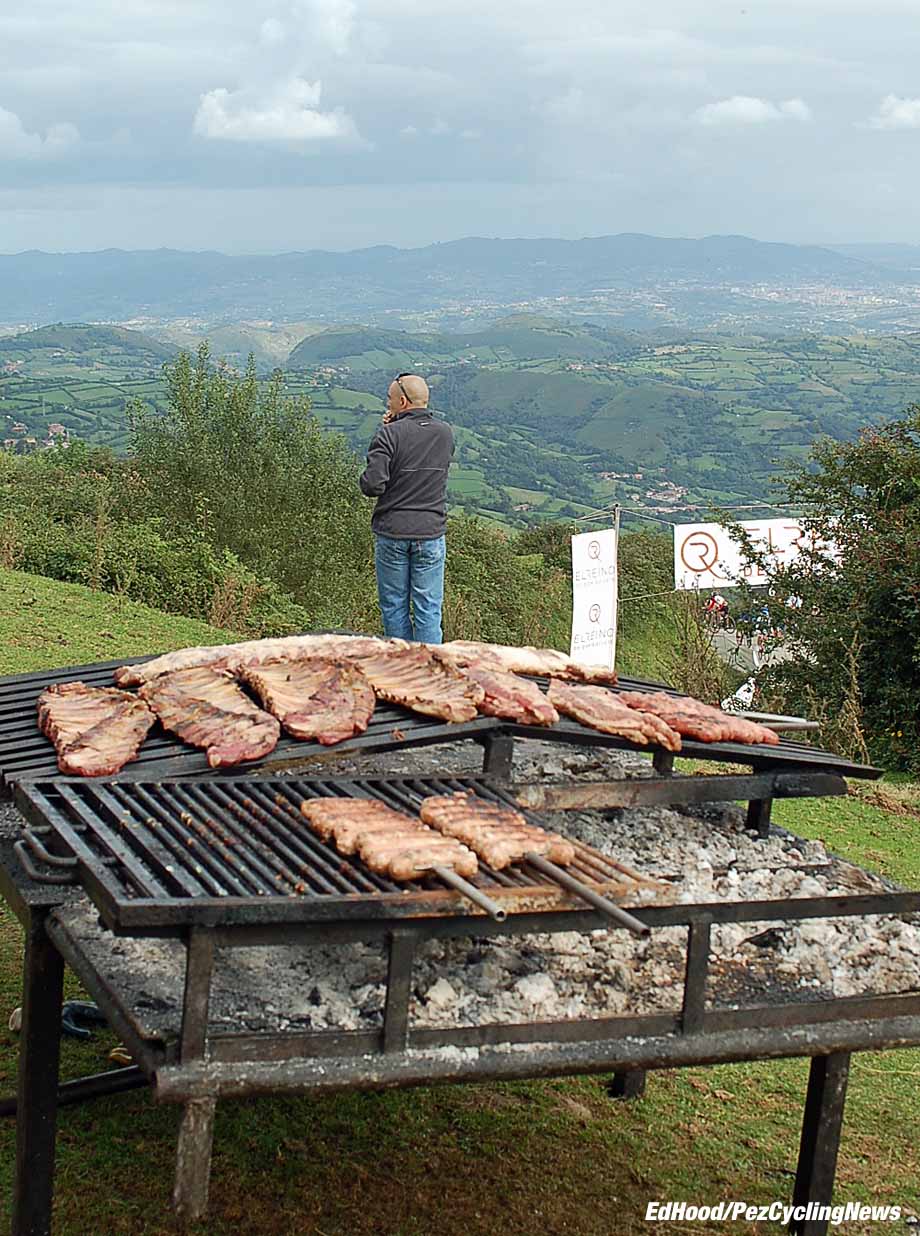 Race day and no vehicles other than team cars on the climb, so PEZ walked in, eight or nine kilometres, as I recall. Hungry work but those enterprising Asturians had set up food stalls the day before on the climb – no burgers here though, just big lumps of cow. 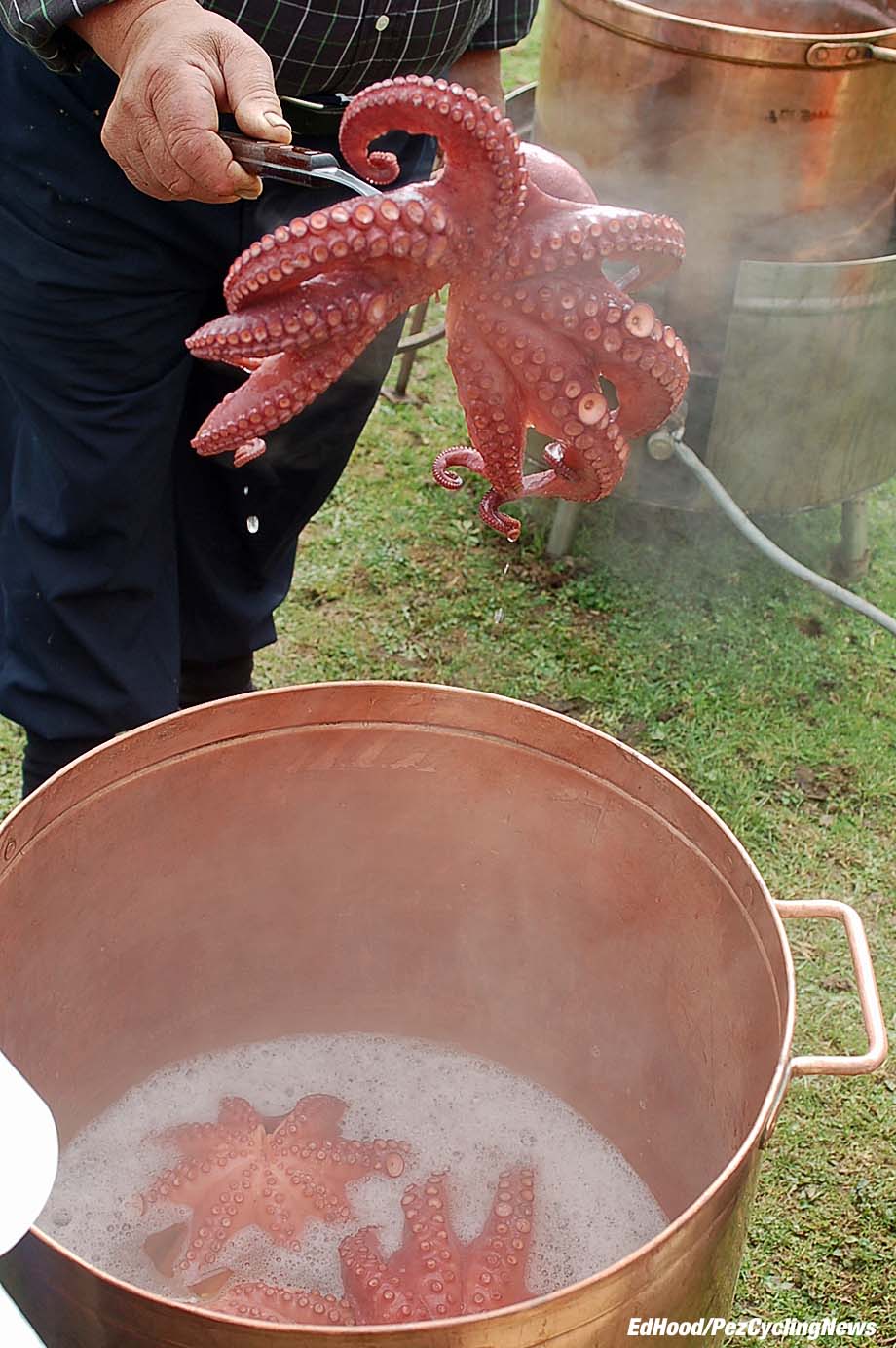 Or maybe an octopus or two? 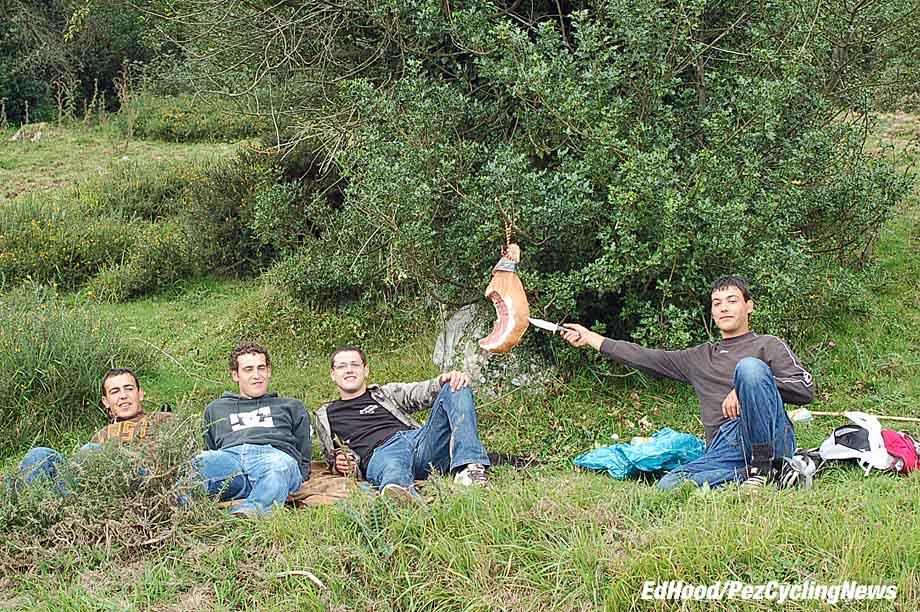 But some of the fans had brought their own chow to the party. 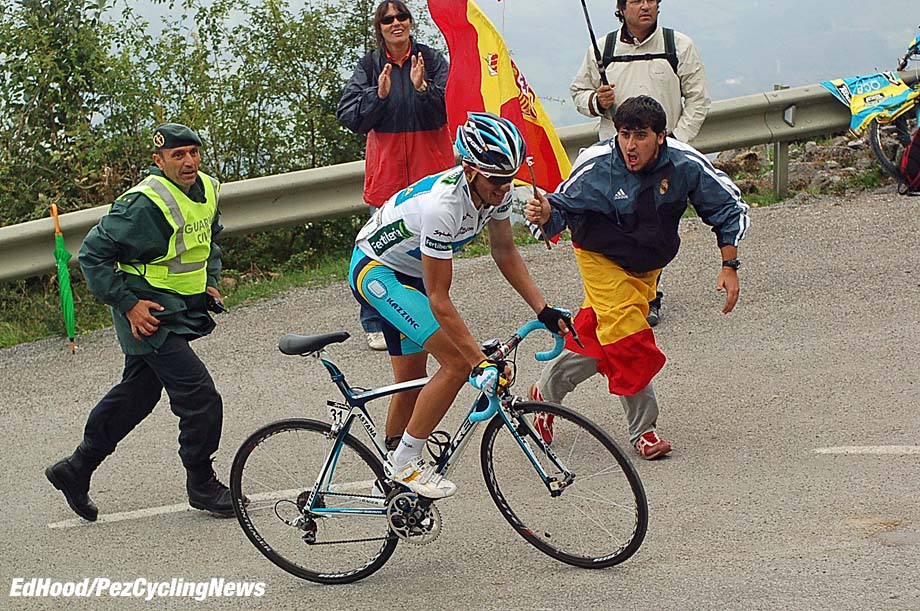 First up the monster – not for the last time – and en route the leader’s jersey, Alberto Contador sending the crowds into ecstasy. It’s a pity that his name is forever tainted by that disputed clenbuterol positive. 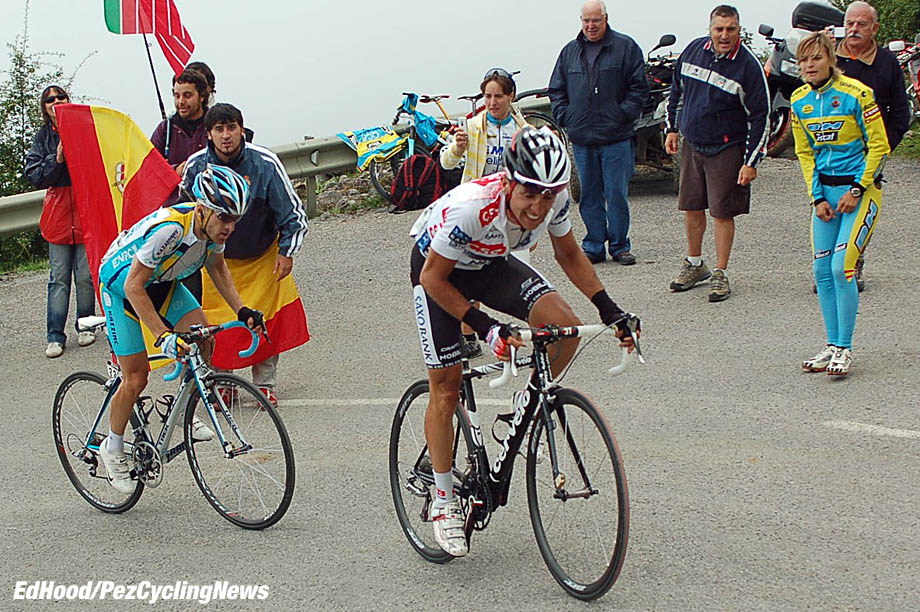 Behind him, Sastre and Leipheimer squabbled for the places of honour. Sastre has long retired with no stain on his name – the same can’t be said of the American, who actually failed a dope test way back in 1996 in the US criterium championship well before his cooperation with WADA in 2012. 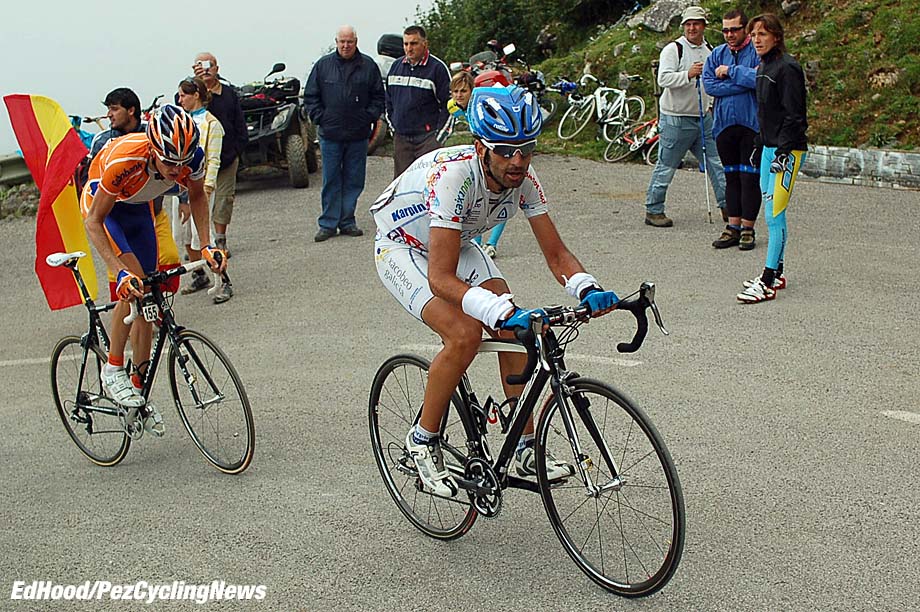 Mosquera and Gesink were also well to the fore. The perennial Gesink is still with us at LottoNL-Jumbo and has a contract until 2021 – the Galician rider has long since slid into obscurity after a prolonged, messy ‘positive’ for a ‘masking agent’. It wasn’t a good era for our sport. 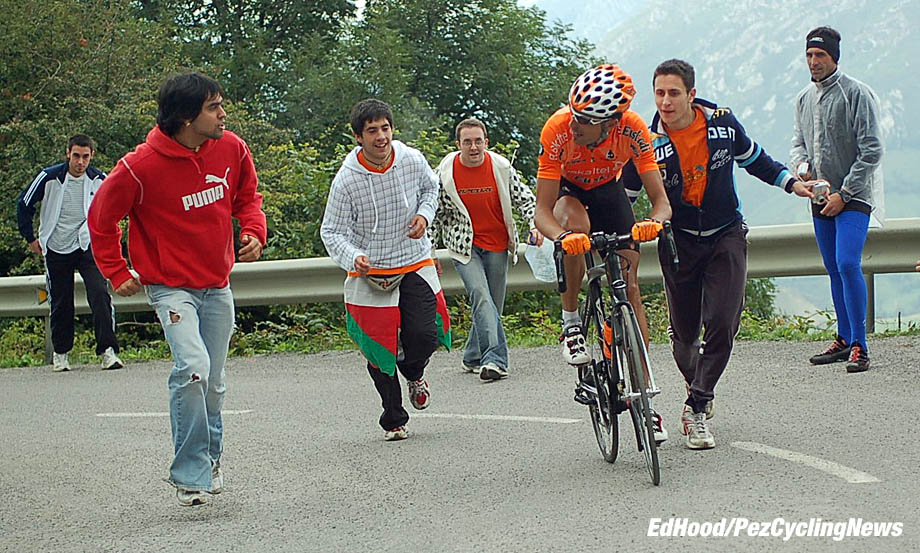 But not everyone could dance the cruel slopes so lightly and were happy accept a little hand – or two. . . 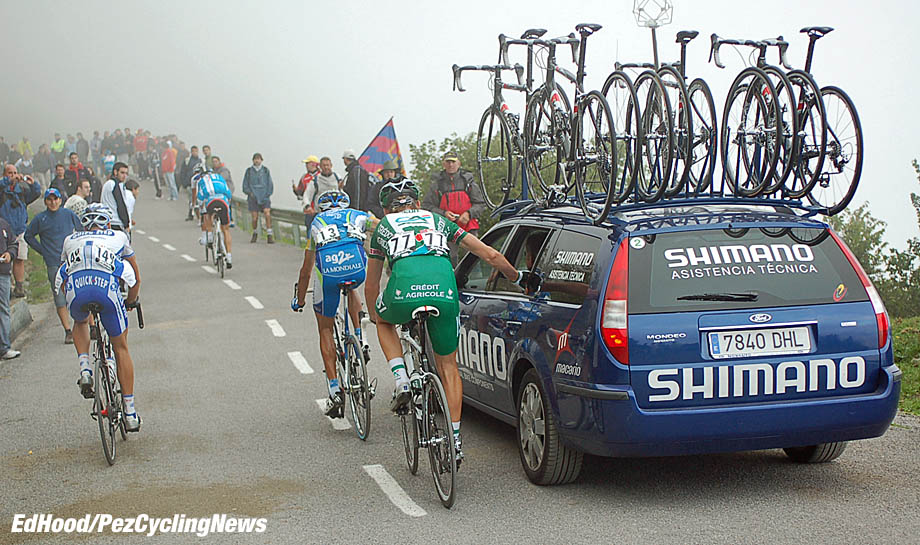 And even that wasn’t enough for some. 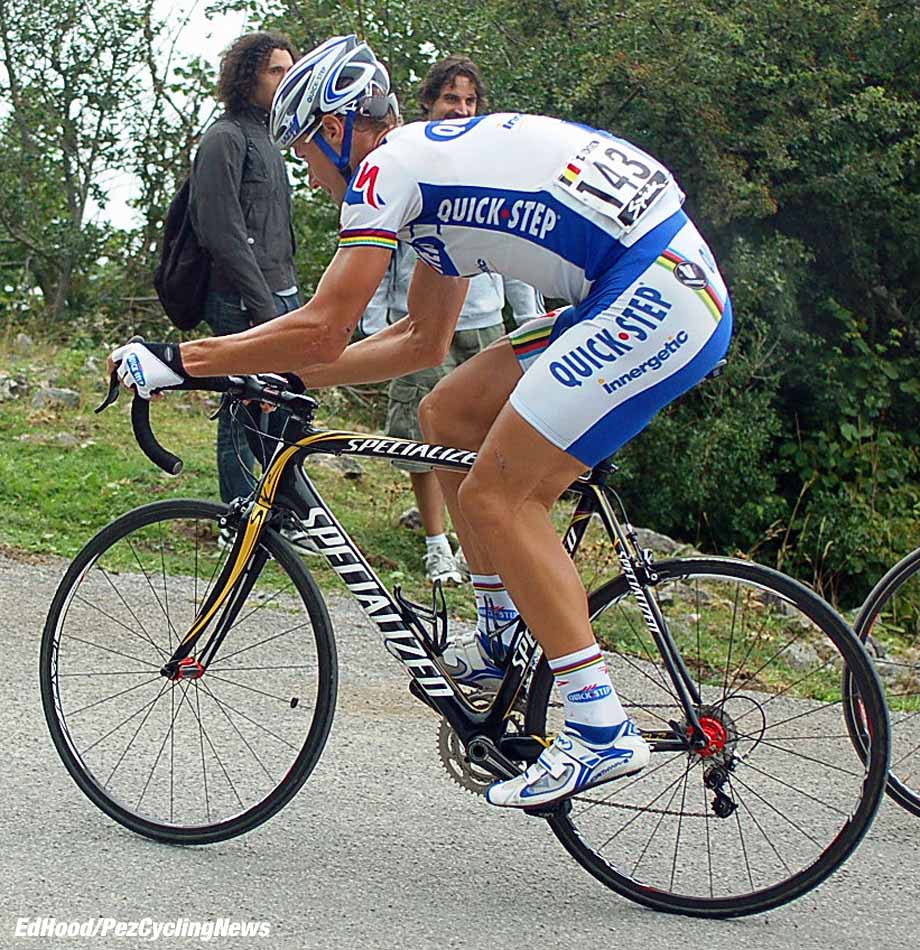 No one dares lay hands on a Deity though; and big Tommeke struggles upwards under his own steam. 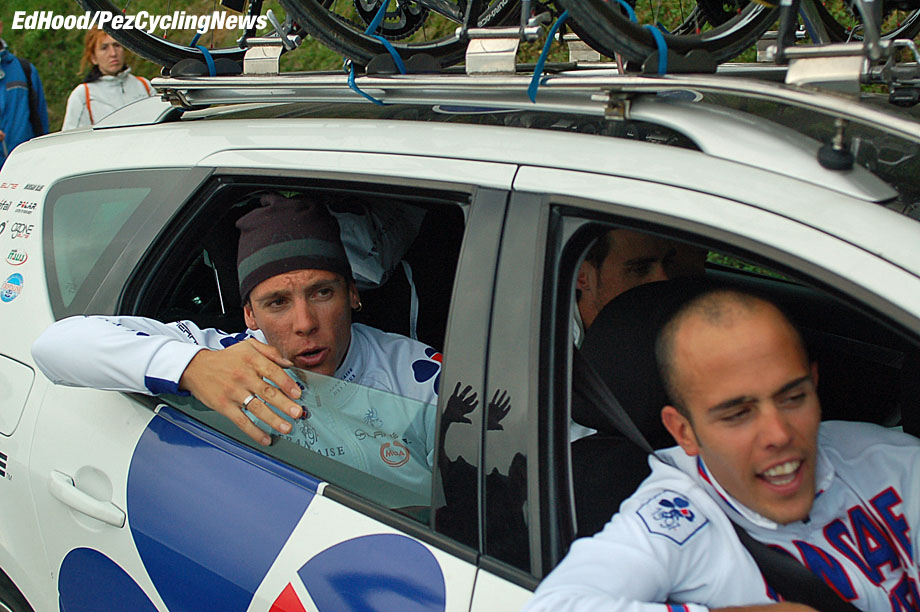 Once they’re all up, they have to come down again – in the team cars per the race regulations. But it’s not happening quickly enough for Phil Gil. 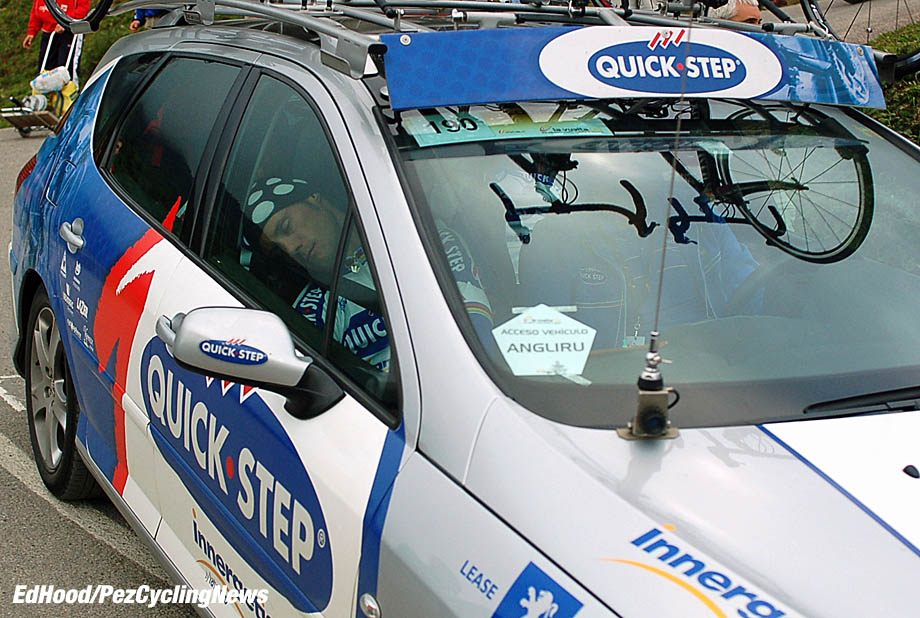 Tommeke has the right idea and naps as the team car fights down off the hill through the masses. 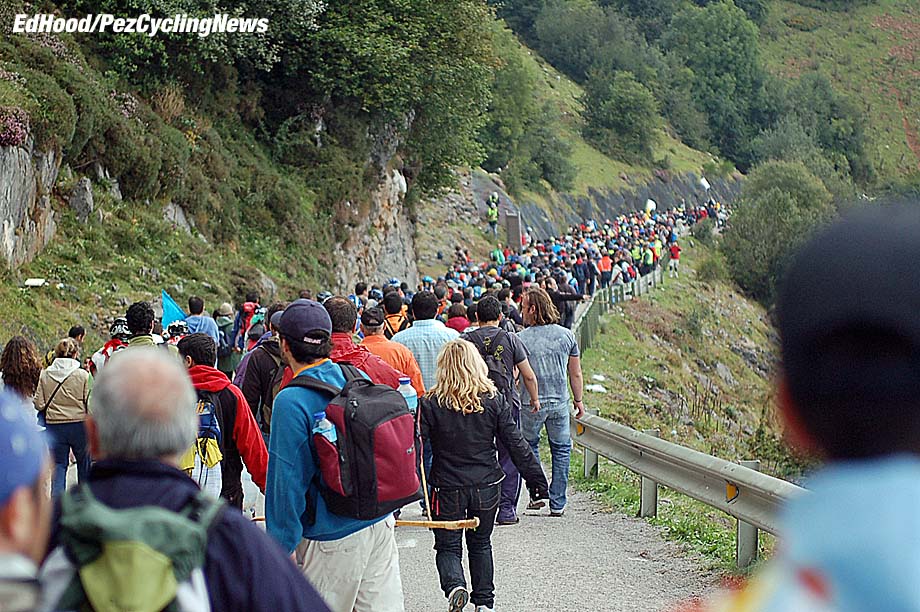 The show is over, the end of a long day and our turn to fight our way off the hill. . .

You can’t compare the Grand Tours, they’re all different in character but when it comes to being relaxed, it’s hard to beat the Vuelta. And if you like your hills hard and historic then get yourself over to Iberia, not just for the racing but for the history, the culture and often, a chance to step back in time.

# Thanks for the memories, Ed. Keep it PEZ for the best coverage of the 2020 Vuelta a España. #