Roadside St.21: A 1,100 kilometre round trip to Madrid is not something I would consider doing in one day to see a bike race, but it is the Vuelta a Espaсa, it’s been the most exciting Grand Tour of the year and, most importantly I could meet up with PEZ mate Ed Hood. What more encouragement did I need?

It was with quite a bit of trepidation that I left my house on the Costa Blanca to drive the five hours to the start of the last stage of this year’s Vuelta a Espaсa in the small village of Cercedilla, north of Madrid. The Madrid ring road was its usual un-helpful self, but at least it was a Sunday and not too busy, so a couple of missed turns here and there was not a big problem. 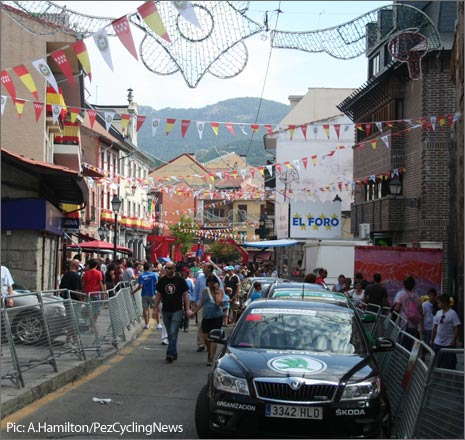 Once off the A6 and into the Guadarama hills (mountains) the road just climbs and climbs and as we got closer to the small village the houses took on a very Alpine style and a sign at the side of the road confirmed it, saying; 1,500 metres altitude. 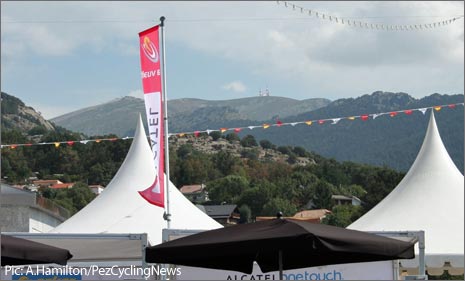 Cercedilla is small, and I would imagine would be packed with Madrid skiers when there was snow on the hills, but the rest of the year must be quite quiet, not today though. Behind the race village we could see the finish of yesterday’s stage on top of the Alto de Guarramillas or Bola del Mundo as it is famously known now. 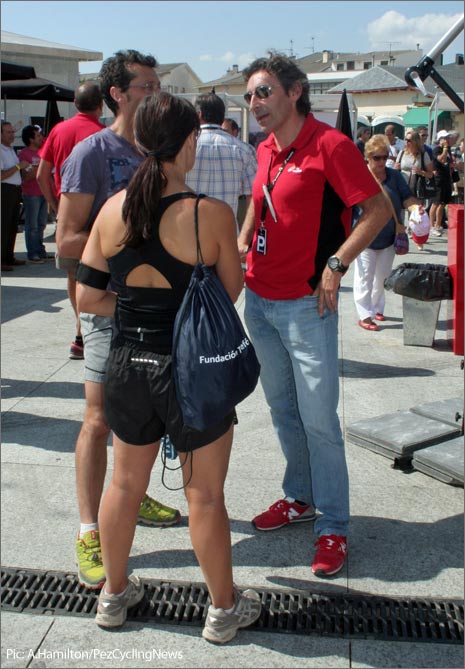 Fernando Escartin works on la Vuelta driving VIP’s, but he still looks as fit as when he used to get on the podium at the Tour de France and Vuelta a Espaсa. 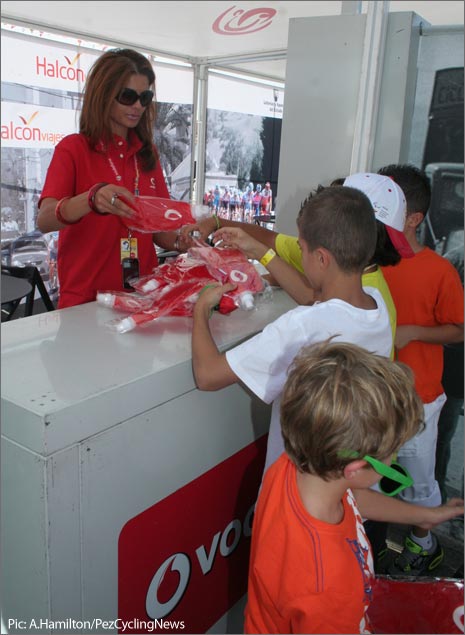 There was the usual scrum for the free give-away’s and not surprisingly the Vodafone stand was one of the most popular with the kid’s with the usual braded plastic goods, although the shopping bag will come in handy. 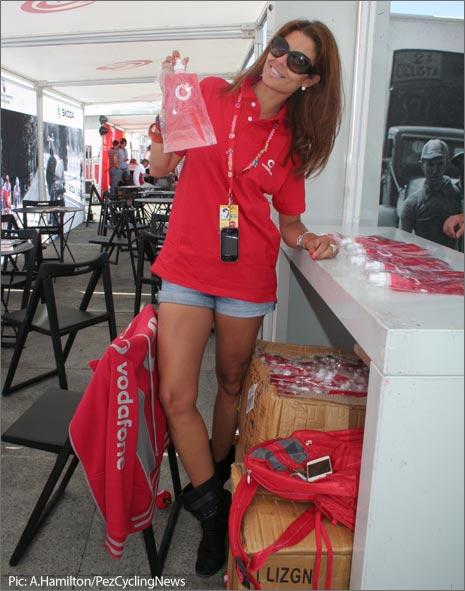 Patricia has appeared as a Daily Distraction since my first Vuelta’s many years ago, she has time for the little kid’s and always has time for this not so little kid from PEZ. Her boyfriend, Manuel Quinziato is riding in Canada at the moment for his BMC team. 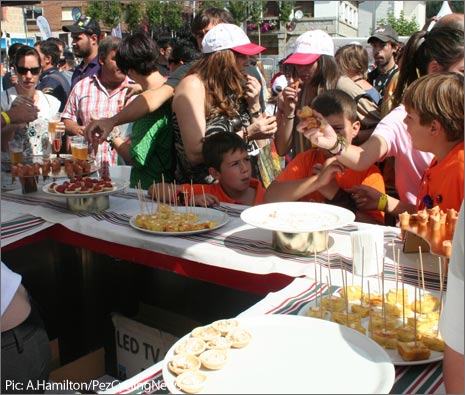 Over at the food tent, courtesy of the Basque Region (Euskadi), there was a battle between children and old people for anything they could get their hands on, but not to worry, this PEZ scribe got his fair share of chorizo, tortilla, cheese and…..well I was hungry! 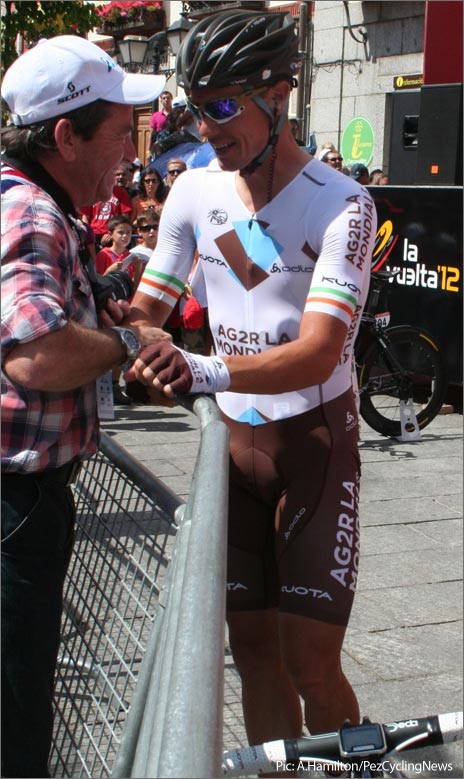 Talking of PEZ scribes, I spotted Ed Hood and Martin Williamson in the start village and after the usual Scottish banter the discussion fell to yesterday’s amazing stage and how much Viktor wouldn’t like it. OK best do some work; time to see who was at the sign-on.

First up was Nico Roche, he looked like he was out for the win today as he was wearing a skin suit, I asked “keen today Nico?” The answer wasn’t what I expected “eh no, I left my jersey in the suit case and had to wear the skin suit, feels a bit weird!” 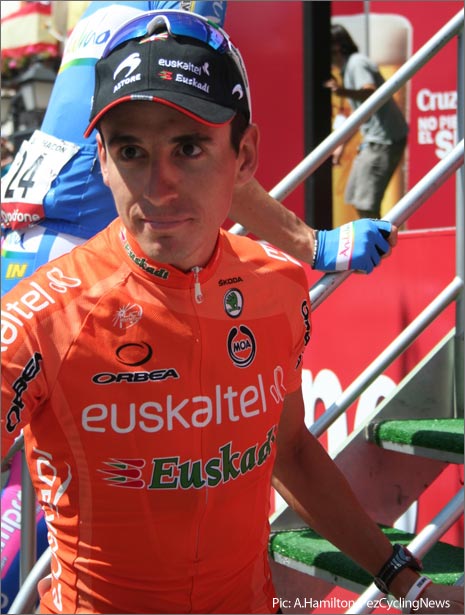 Igor Anton is Euskaltel-Euskadi’s highest placed rider in 9th place at 14 minutes, a good performance, but probably disappointing because there was so much of the race this year in his home region. He was still happy enough to sign autographs, maybe next year. 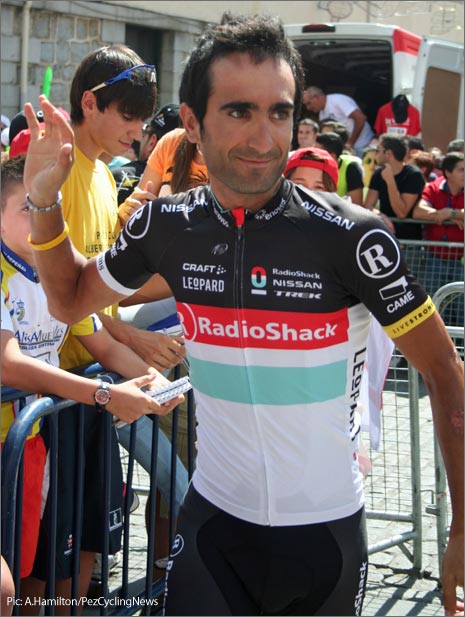 One man who was highly tipped to take the stage in to Madrid was Daniele Bennati just like he did last year. No one had told German fast man John Degankolb though but that was still to come. 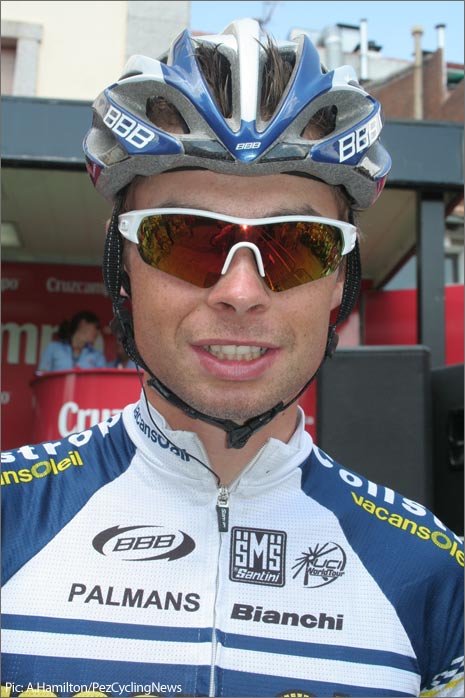 This was young Bert-Jan Lindeman’s first Grand Tour, the 23 year-old Dutchman has had a great first year as a professional; winning the Ronde van Drenthe, the KOM in the Йtoile de Bessйges, plus 3rd in the Dutch National championships and getting in many race breaks. I asked how he felt? “Yea good, it’s been very hard, but I’m happy to have ridden.” 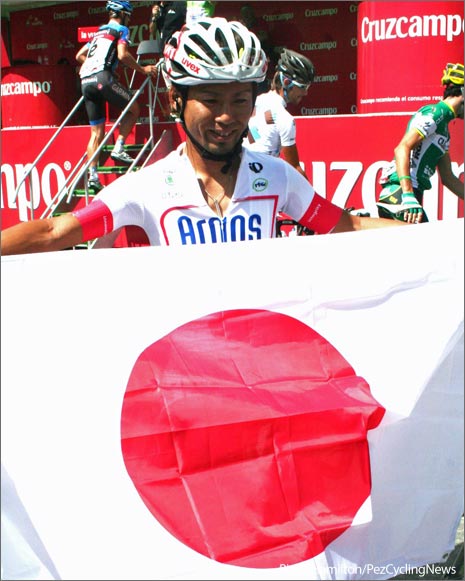 The Argos-Shimano team has a big international mix, Japanese rider Yukihiro Doi was very happy to unfurl his country’s flag for the photographers, he finished at 3:12:22 in 139th. He has been seen at the front everyday that there has been the chance of a sprint finish and with his help five sprints have gone to the Argos team. 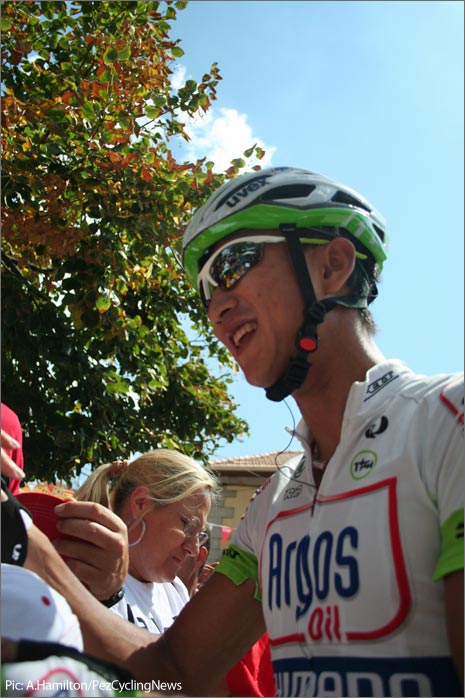 It was a Vuelta of Firsts, Cheng Ji is China’s first Grand Tour rider, he finished last on the Overall at 4:32:35, but he did finish and like his Japanese team mate, Yukihiro Doi, he did lots of work for the Argos-Shimano sprinter John Degenkolb.

Another first was from Eretria, Daniel Teklehaymanot is the first non-white African to finish a Grand Tour, but it wasn’t without problems as he crashed badly on one stage injuring his right shoulder. How are you feeling now Daniel? “Much better thanks, I’m a little tired, but a great experience.” 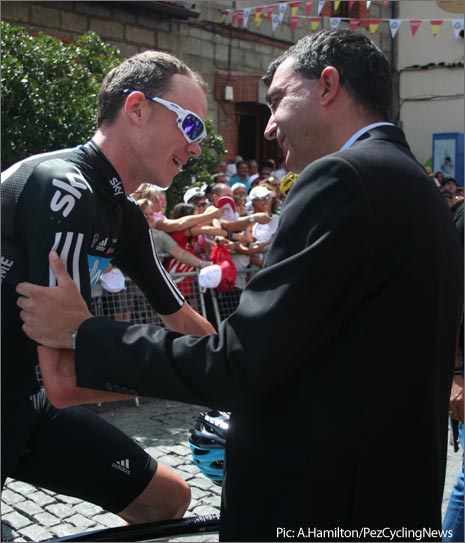 Chris Froome is also from Africa as he was born in Kenya and brought up in South Africa before taking a British passport, but his action has been nearer the front of the race. It looked good for him to finish this Vuelta on the podium like last year, but things didn’t go quite as planned for the Sky team, fourth isn’t too bad when you see how the top three were performing. Would he be back to win next year? “Maybe, I have to see how things go before that, but yea, maybe.” 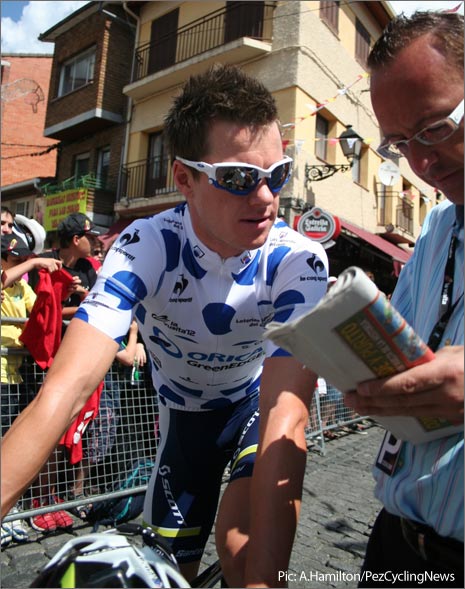 And there is Simon Clarke the KOM leader, will he do the “call me, maybe” on the final podium? 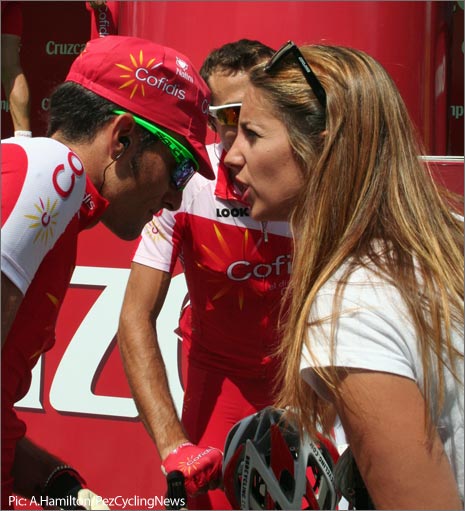 PEZ’s favourite TV interviewer; Laura Meseguer was busy on her last day on the Vuelta for Eurosport, she needed an interview with the soon to retire David Moncoutie, the Cofidis rider has won the KOM classification four times at the Vuelta and this is his last. So no time for a chat with Laura this time. 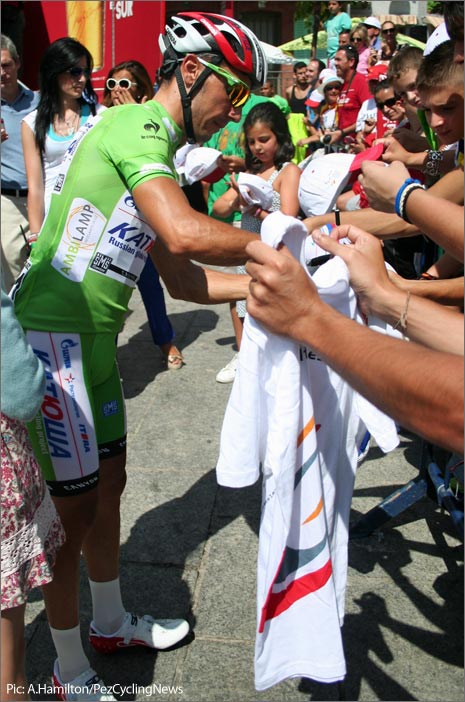 Joaquim “Purito” Rodriguez is very popular with the fans and gets as big a cheer as Contador everywhere he goes and has his fan club at starts and finishes. The little Catalan looked good in his green points jersey and Alejandro Valverde has told him he was gunning for it, so maybe it wasn’t so much of a surprise when he lost it later, but it must still have been disappointing. 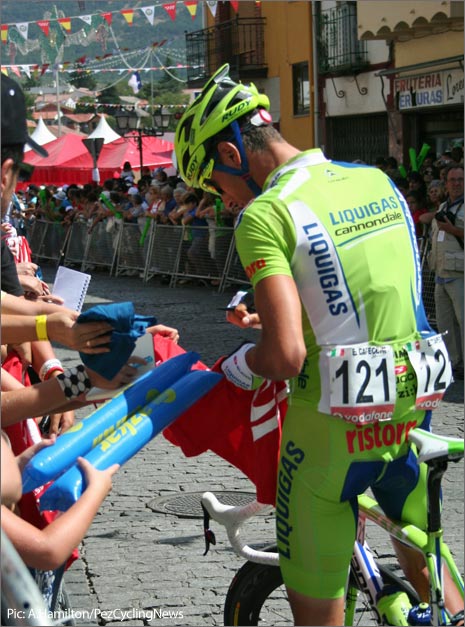 No time to wait for Alberto Contador to sign in for the last stage of his winning Vuelta as we had to go to get our place in front of the race, get onto the circuit and then find a parking spot in Madrid city centre.

Whatever people think of Alberto he is universally popular in Spain, his team bus has to park near the sign-on (when possible), he has a minder to guide him to starts and finishes and always sign’s on at the last moment. 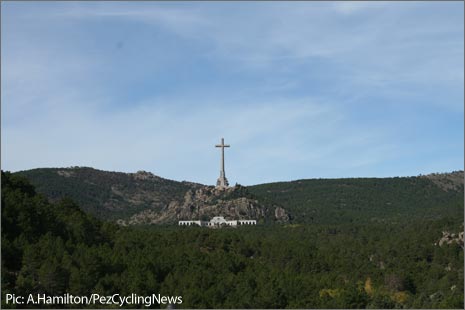 As Ed pointed out there wasn’t much to see on the route in to Madrid, except the enormous cross built by Francisco Franco, the Valle de los Caнdos. It’s a lasting monument to Spain’s Fascist past and is hated by many for what it stands for, but from an architectural point of view it is astounding. OK next up Madrid and a bike race.

Tune in soon for Part 2.

Eurobike’12: The Clue’s In The Title